Today we’ll crawl APT’s front bullets, first starting in the south. The last section will be focused exclusively on the Mid-C. 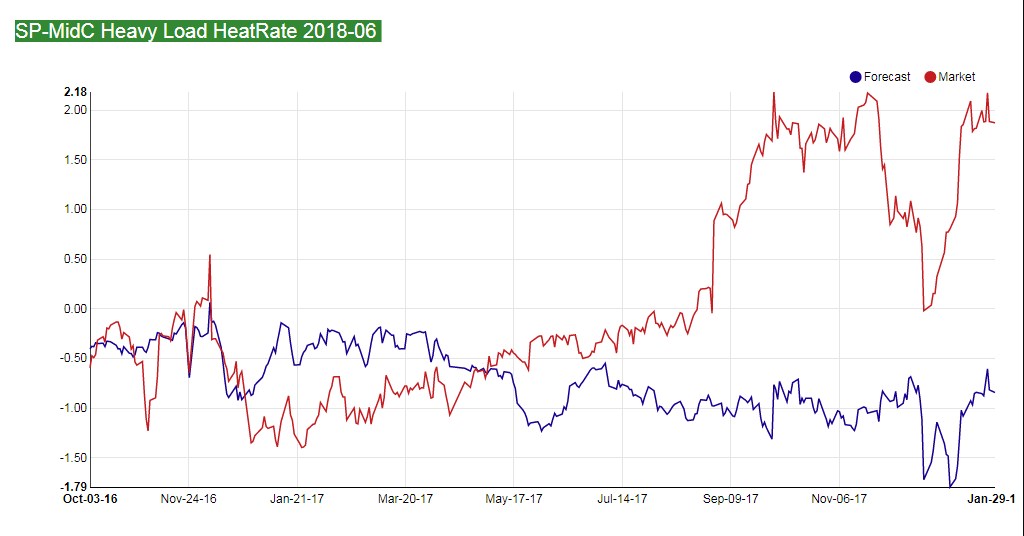 The June SP|MidC has soared back to contract highs, and we don’t disagree. If anything, we’d still be buying this off of an ever-growing water year at MidC. Toss in the extreme dry in CA, and maybe some early heat and you have a recipe for blow-out spreads. 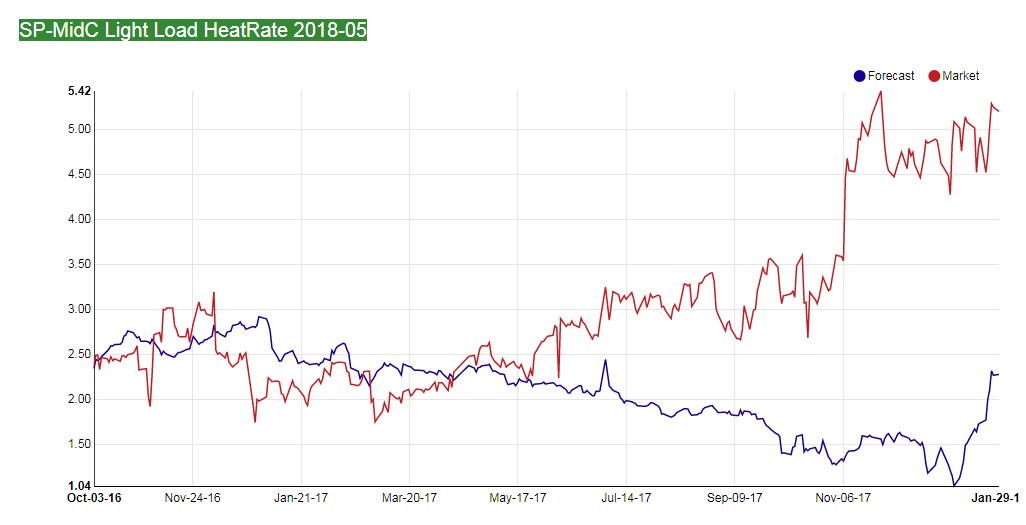 Similar story with the May spread for LL. The saving grace for May MidC, in our opinion, will be the deep draft in April. All will come down to how warm April and May are in the Northwest, should we get a cold one, like 2008, then this spread is over-priced, as it sits now, it is probably fairly priced. 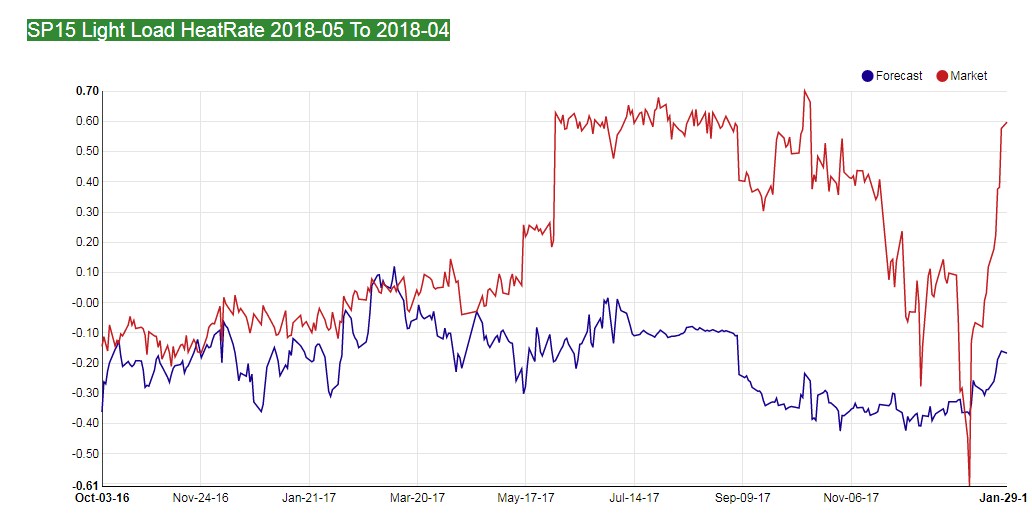 We wrote about this a few weeks ago, from the buy side and were right. This was stupid-priced two weeks ago; May should command a healthy premium to April; it didn’t, it does now. 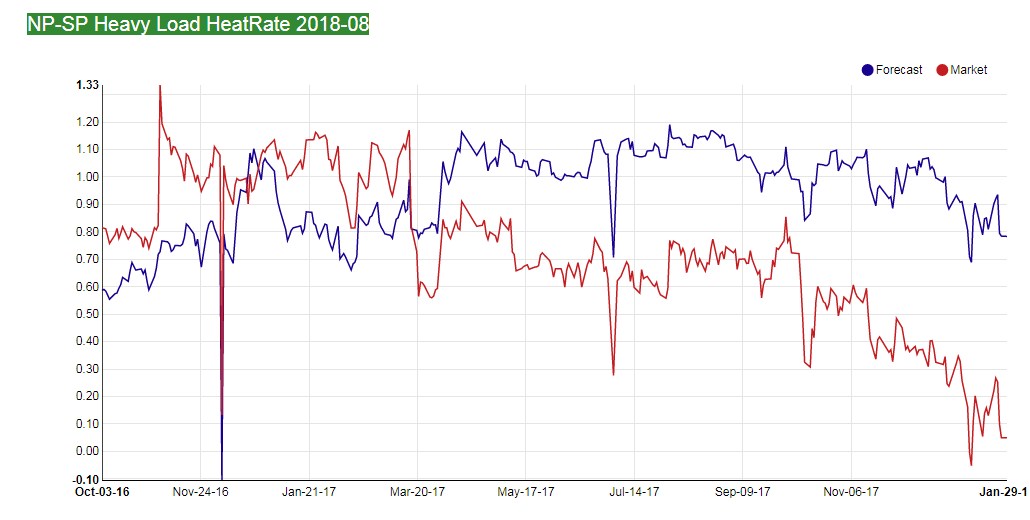 The intra-CA spread for August is cheap; bear in mind, CA has a very bad water year, and NP has more hydro capacity than SP and will take the bigger haircut. I know, everything SP has been gold for the last eight months, but this is cheap and should be owned. 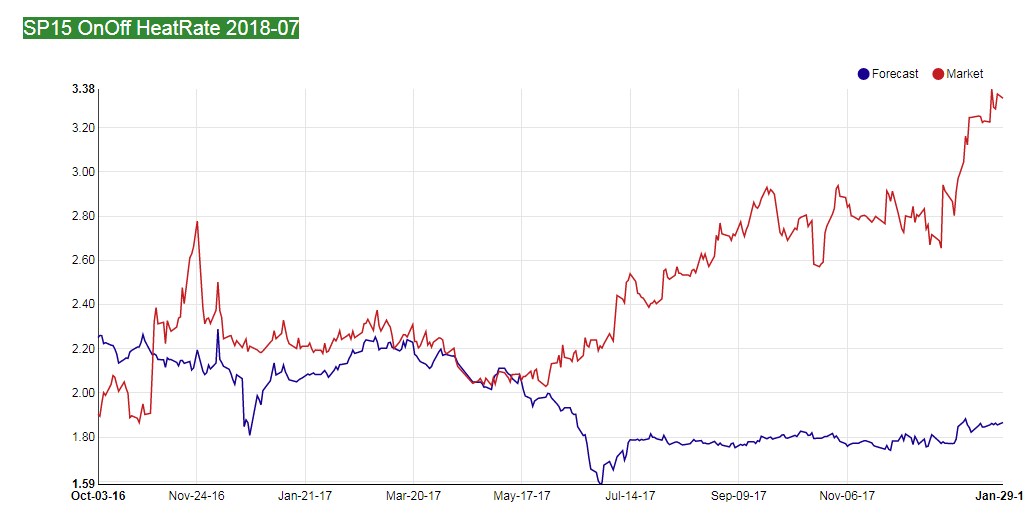 Short at your peril, we’d be tempted to do so only because the on|Off is so high. Tight water should tighten the spread, not widen it. Still, shorting is like selling the daily onpeak call, not a strategy that will make your Risk Manager smile. 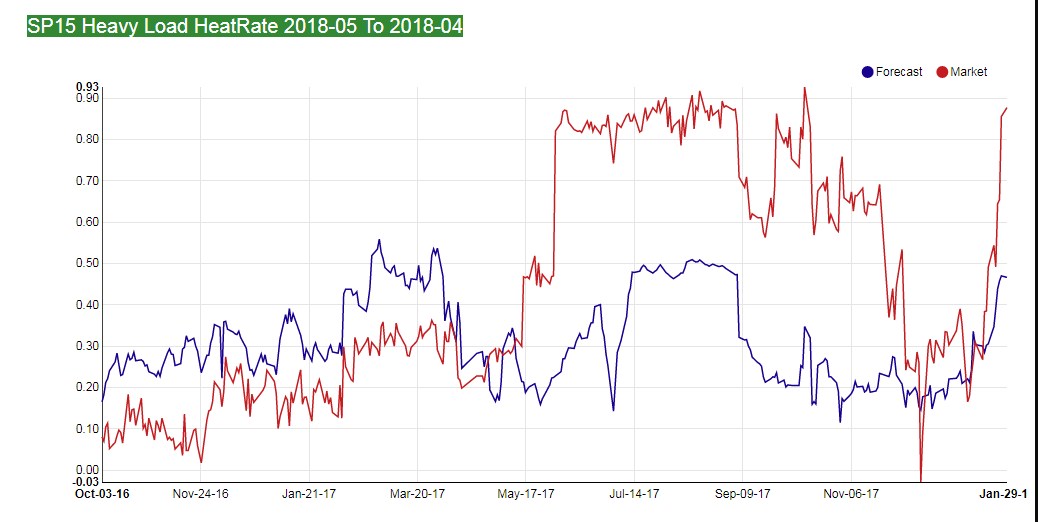 Same trade as the LL, just HL in this case; check out that crazy move, but we think its back to value now and would take it off if we were long. 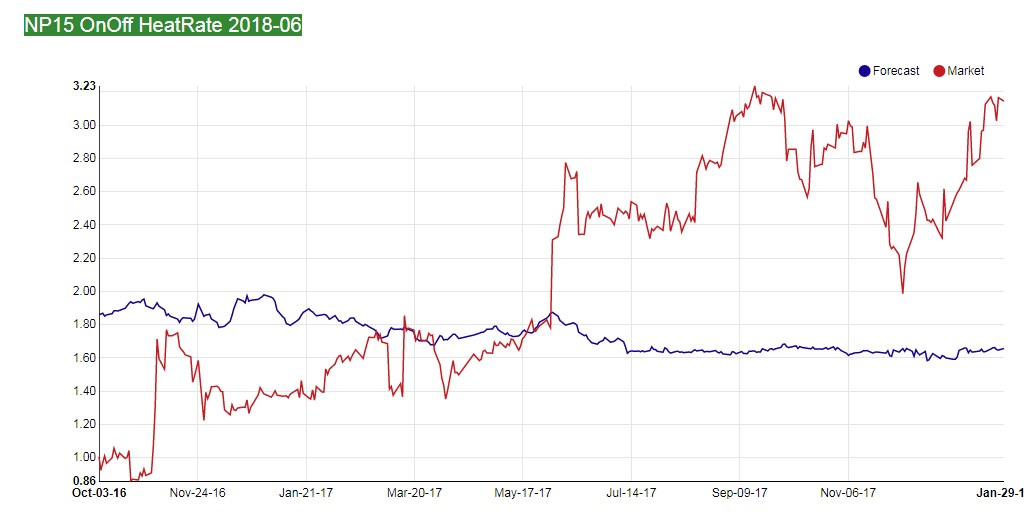 Tight water, same story, we don’t think the On|Offs widen in dry years, but this is.  We’d sell it. 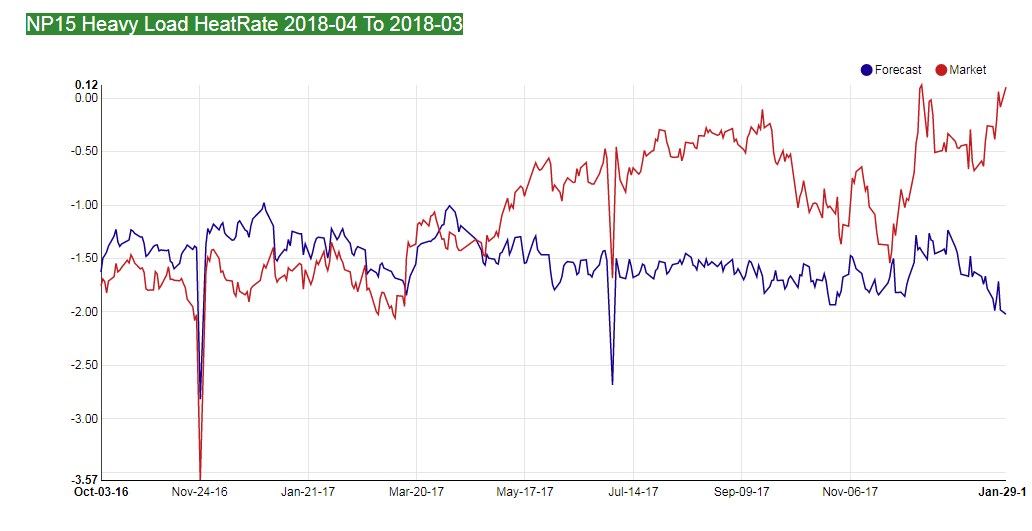 Not a lot of volatility in the Apr-Mar roll, just an ever-increasing price; now its a contract high and a short candidate. Doubt we see much NP demand in either month, but we will see more gas outages in March than April. 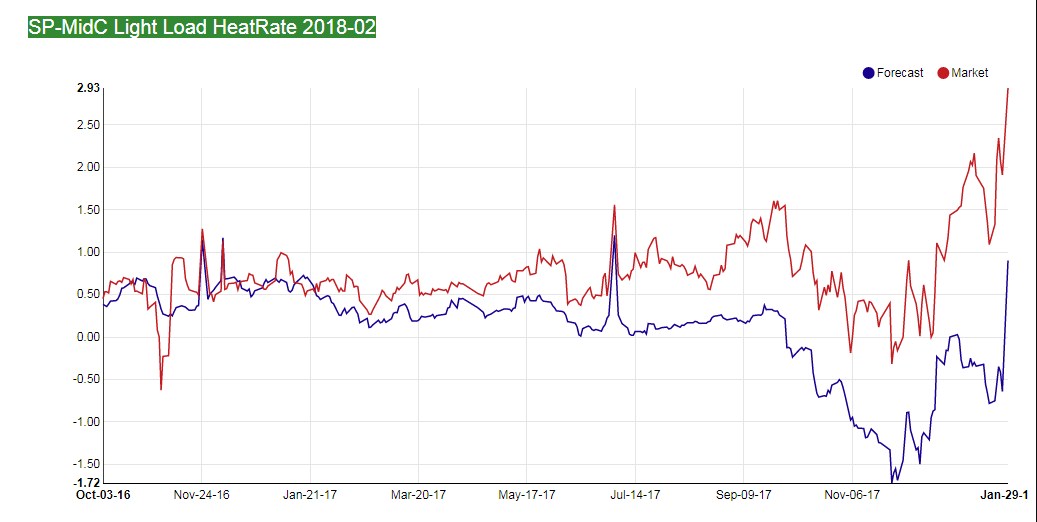 Another spread, Feb SP-MC LL, and this one is a bit to the high side, gas-driven, but still too rich to own. SP’s LL demand will drift off with warming weather, MidC’s won’t fall as hard. Water will be regulated in Feb, not massive natural river flows this year. We’d sell this. 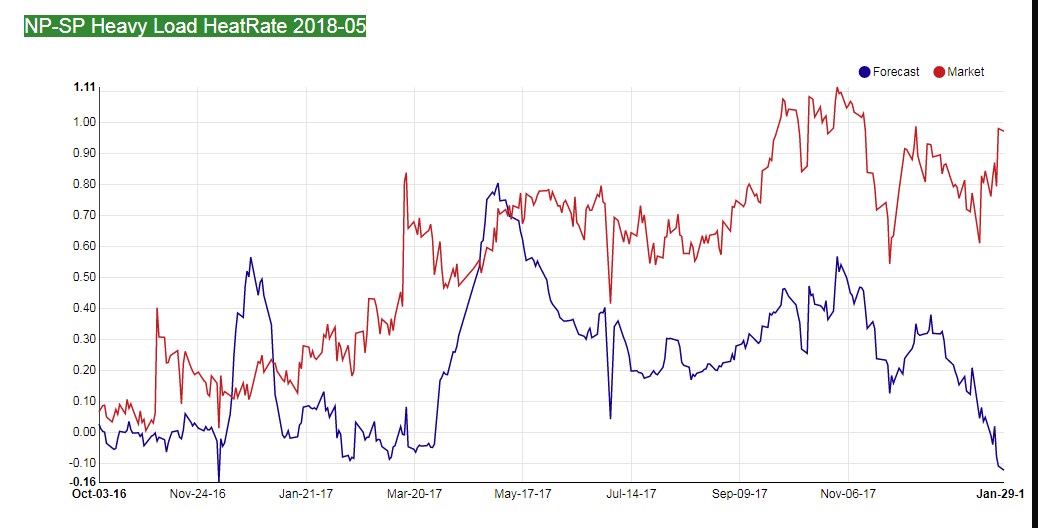 The market is slowly drifting up in the spread, but the forecast is cratering off of no runoff at NP. We’d short. 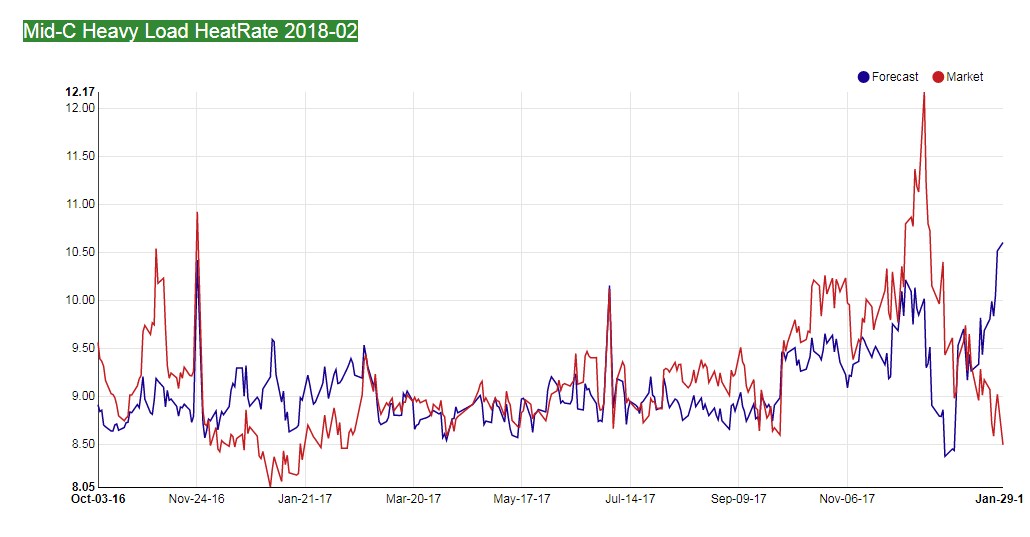 The Feb is now approaching a contract low and is cheap. Prompt will be highly regulated, and most of the draft will take place in Mar-April, so we don’t see issues with going long at MidC when the prices are cheap, which they are. The warm Northwest has crushed low elevation snow: 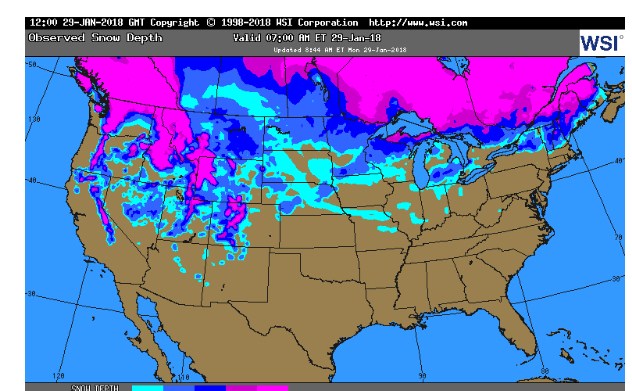 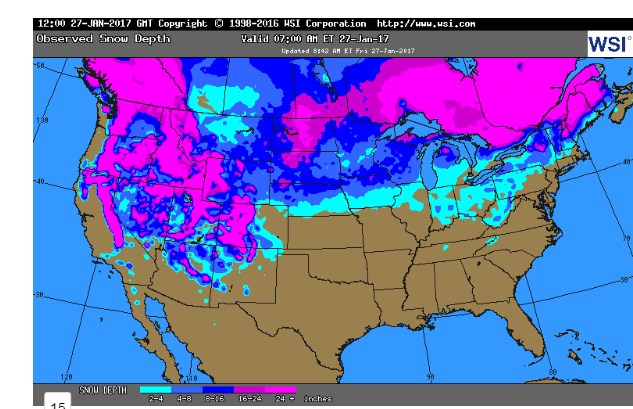 There isn’t any, and those low-elevation SWEs are the first to feed the rivers, but this year there isn’t any to feed any rivers. Feb and Mar flow will all be regulated. 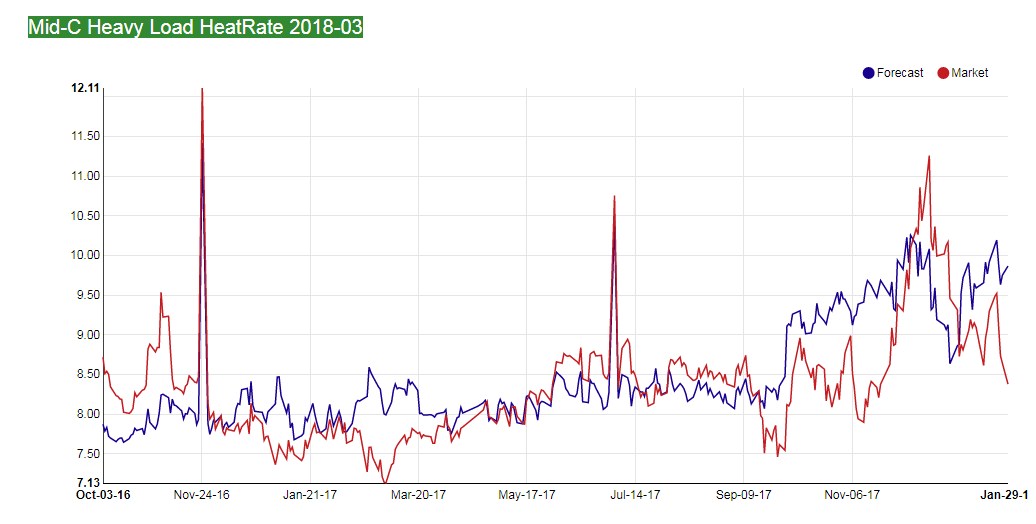 March has gotten cheaper, and we’d be inclined to own cheap. 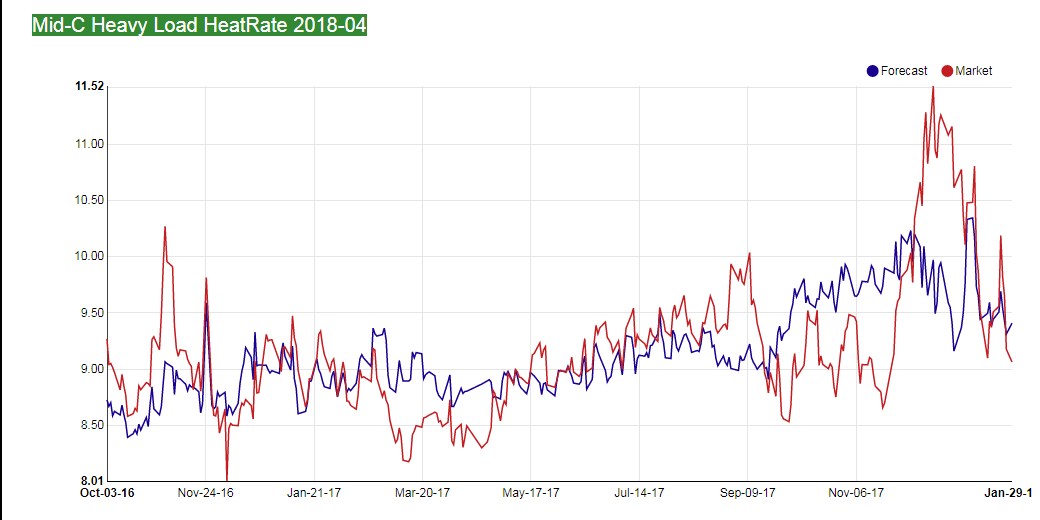 April tried to rally but was quickly beaten into submission. We think it needs to be beaten down further as we expect a deeper draft than Jan’s 1245. Of course, the Snake is below average, but the Upper Columbia is well above, so is Canada. 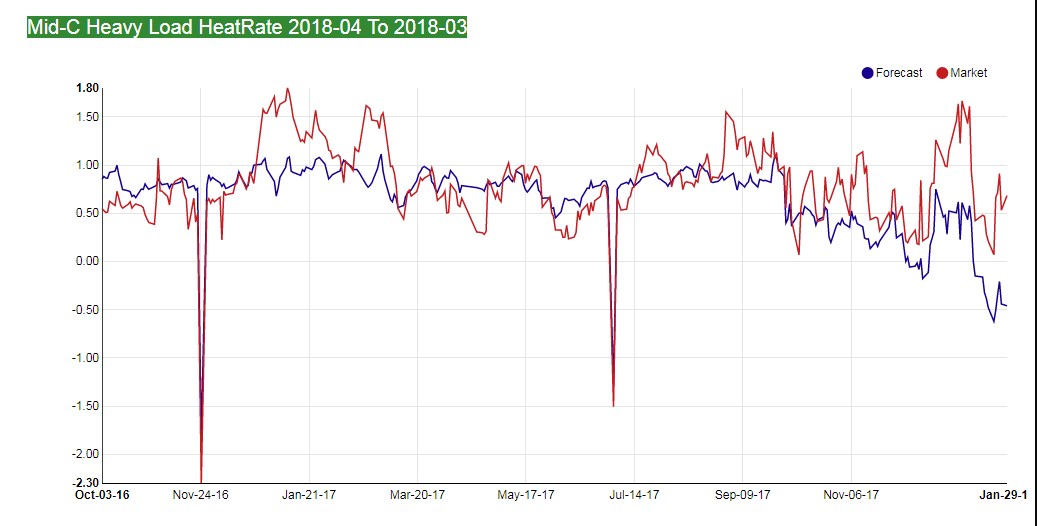 We advocated shorting the Apr-Mar a few weeks back; we’d stay short. 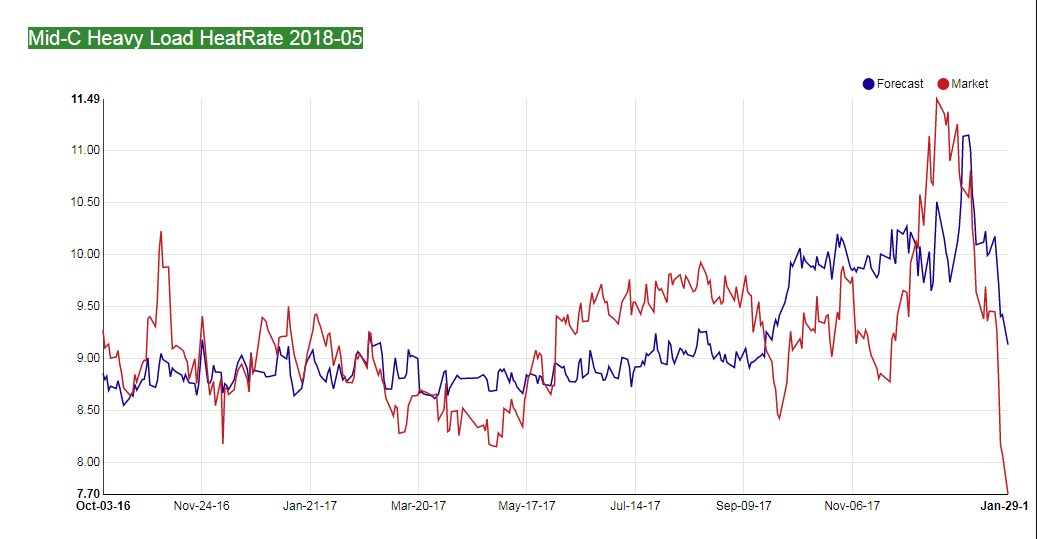 Wow! You really hate May, don’t you? This is now in over-sold land, and we’d buy it because it is cheap and May is a refill month with possibly a deeper hole to fill. Plus, we know nothing about runoff timing just yet; April and May could be cold which would crush inflows. BUY this dog. 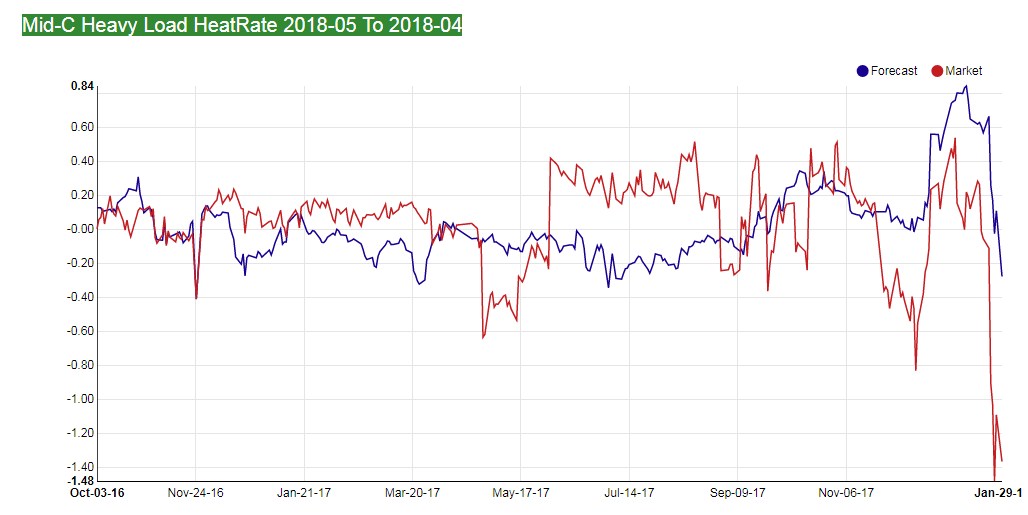 Sorry, we don’t agree. April drafts, May fills. Without knowing the actual temperature, we can’t call anything else and would fade anomalous prices. This is anomalous, it’s a freak show, and we’d buy. 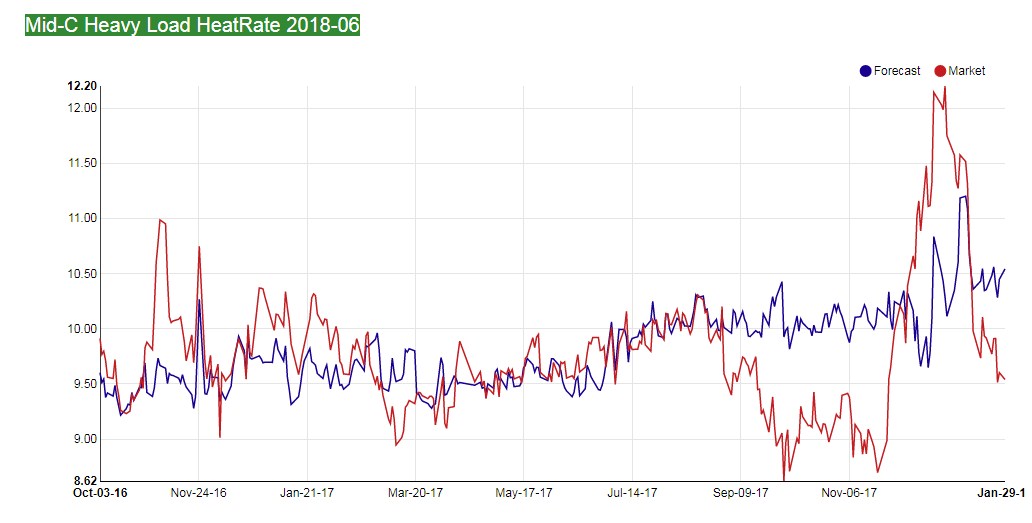 Deep snowpack above Coulee means delayed runoff. In these types of water years, you could expect the Pend Oreille to flow 100kcfs for a month or more, and June is the most likely month that will take place. Though this is “kind of cheap” it is still rich in our book, and we’d short it. 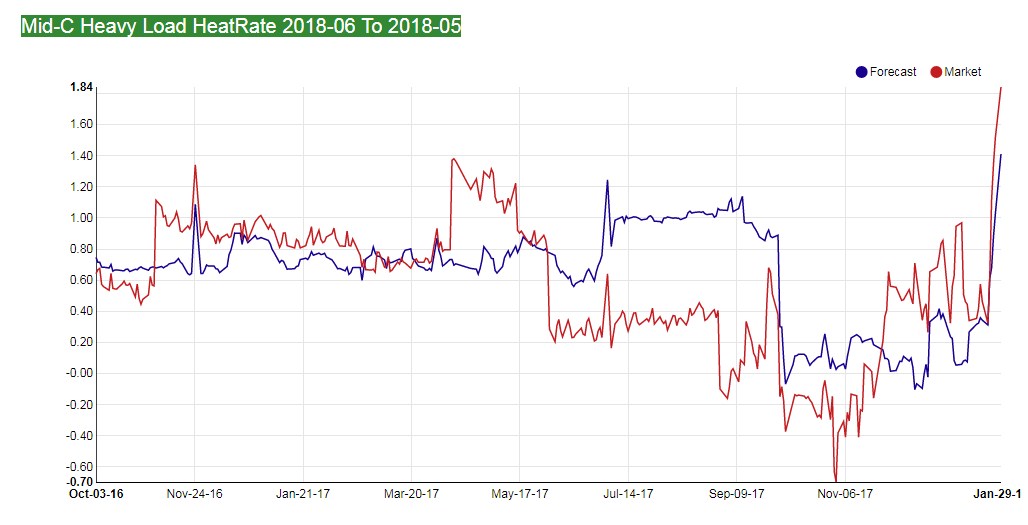 So the crux of the matter becomes the Jun-May roll, and it is quite pricey, and we’d short that, too. Without knowing runoff timing, all we can do in January is fade market anomalies, this is another one, and we’d fade it, also. 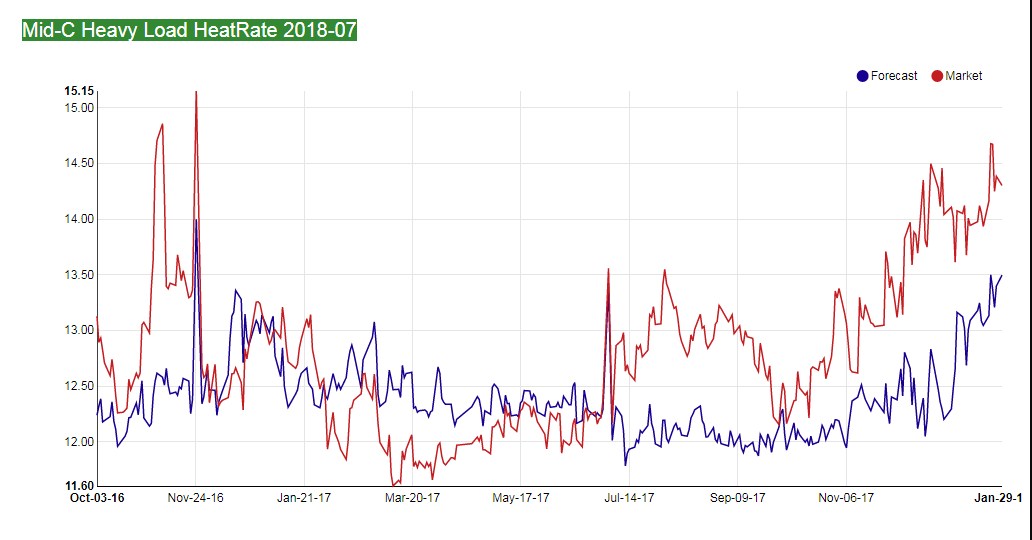 Interesting, market loves July MidC, probably because it loves Summer South and this bullet is going along for the ride. Big snow in high elevations means late runoffs, means strong natural river flows in July. But let’s look at a few July rolls before jamming our foot in our mouth. 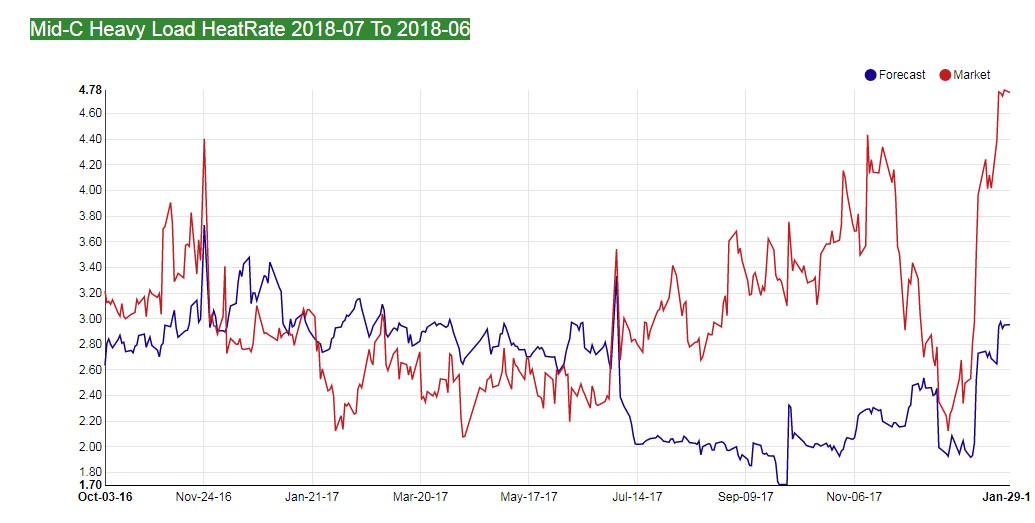 Well, this moved a touch, huh? From dirt cheap (we called that one a few weeks ago) to contract high. Again, fade the anomalies, this is one of those. 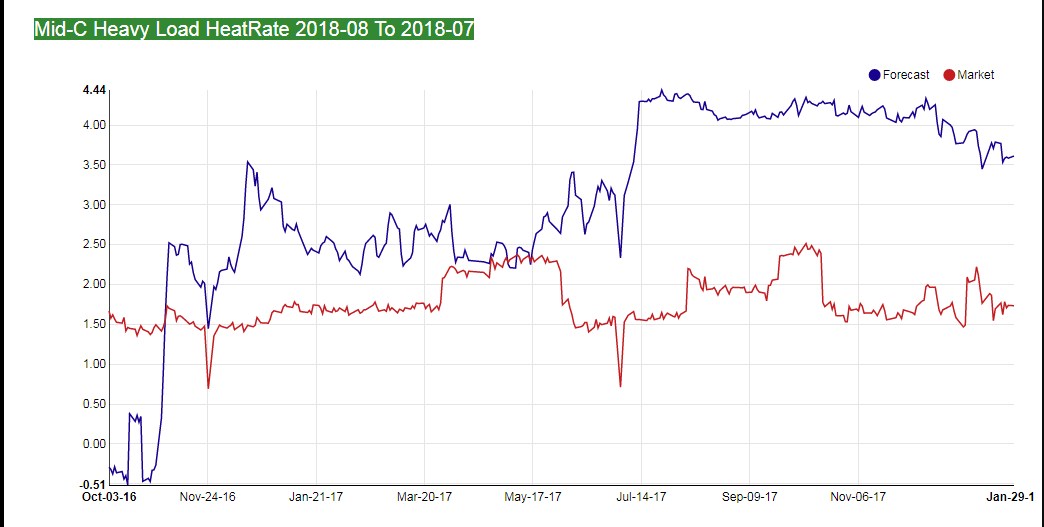 Interesting that the Aug|July hasn’t moved; it should be rallying as snow builds since big water years spill into July. We’d buy it.