Choppy news, what else is new? It seems Socal survived its artic blast, the beautiful people of Hollywood suffered through some unseemly low 40s for a day, but now, thankfully, the city is poised to get back to the low 80s, in January! Oh yeah, TWP’s most recent Needles outage has returned to service. Let’s take a look at LMPs, for starters.

SP premiums have gone the way of cold weather in the Northwest; they are just gone; now the hub trades flat to NP. Palo doesn’t, where we saw signs of reduced congestion we no longer see that; now we see significant issues during the solar ramps.

Despite TWP’s return at Needles, Socal Citygate still commands a $0.40/mmbtu premium to PG&E Citygate. That too shall pass. 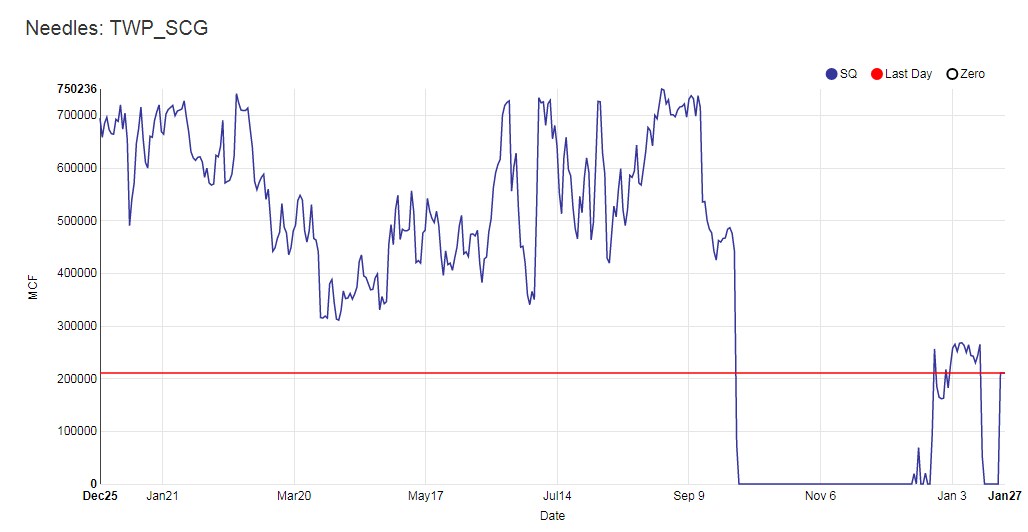 A big proportion of the Pipe’s capacity remains offline, but 200/mmcf/d returned.

Those spot premiums are spilling into the prompt month contracts, but note the Henry rally. For the first time in a year, Henry trades premium to all west hubs. 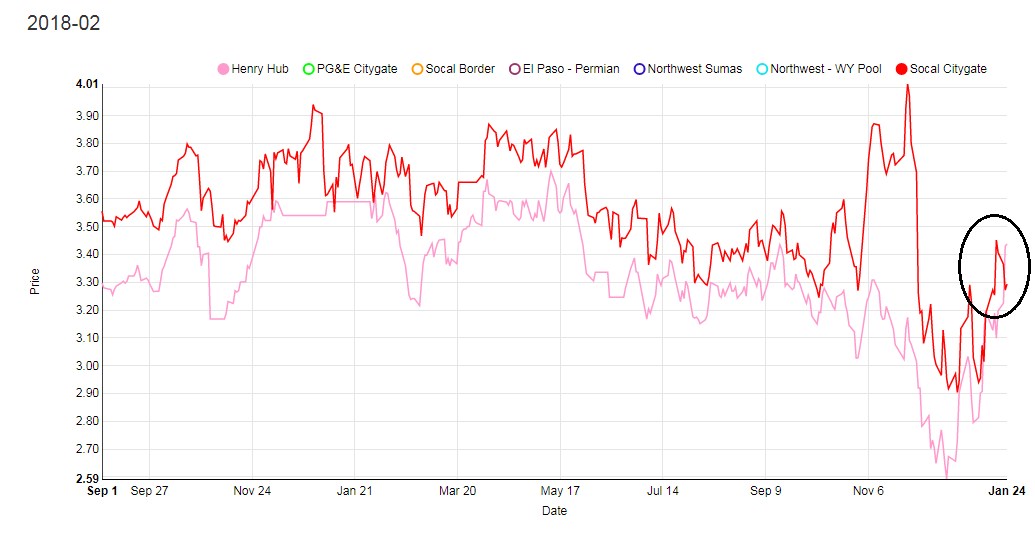 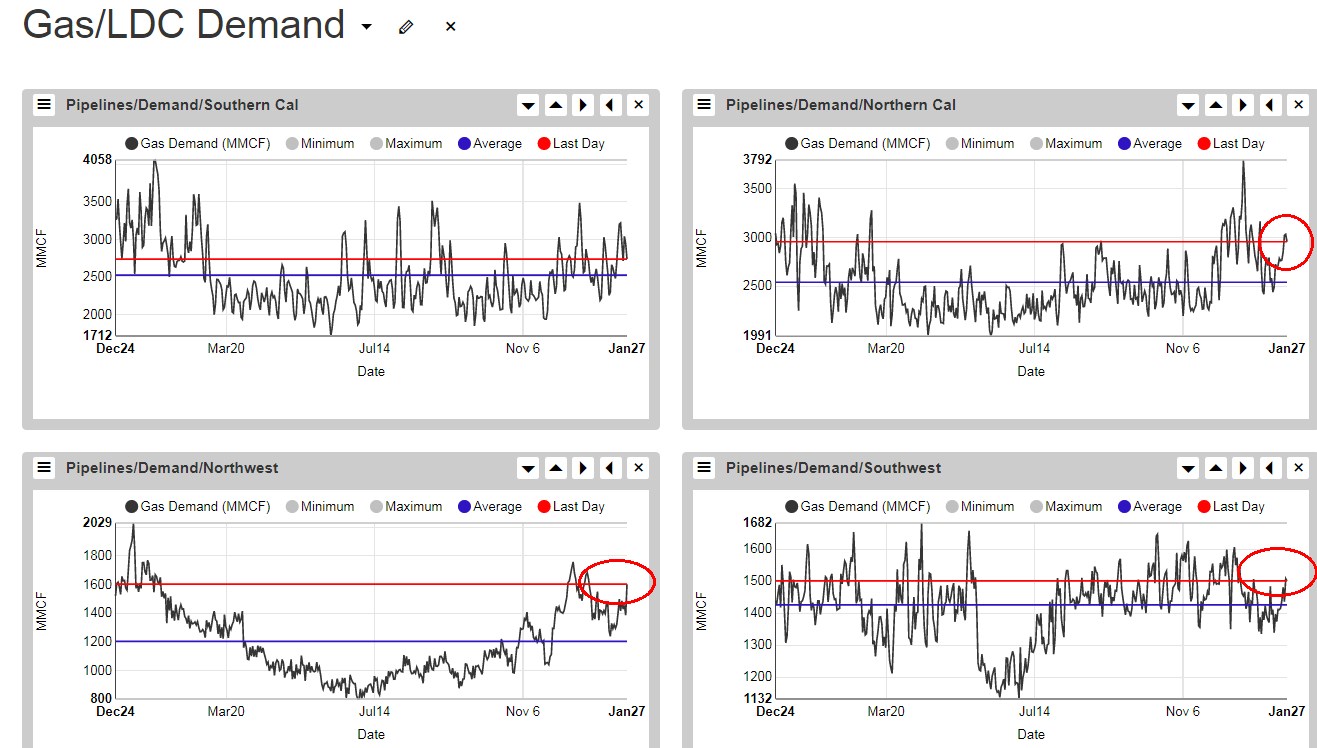 There was a mini cooldown, in the west, as evidenced by Ansergy’s LDC Demand Index – all points are up, none near the winter highs, though. 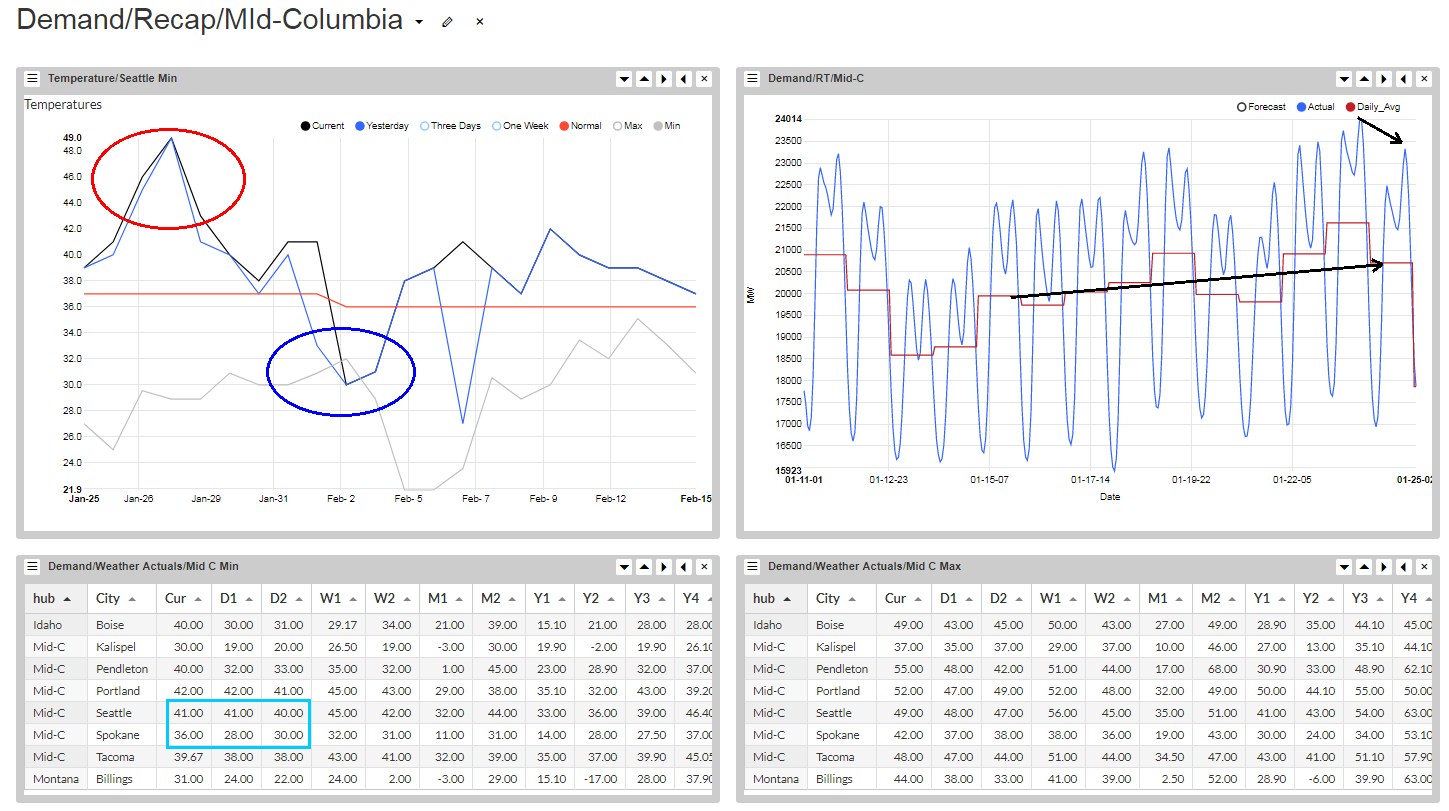 Northwest temperatures are soaring; the lows will be ten degrees warmer than today in Seattle. Loads are up week-on-week, but down from Tuesday’s highs. We see a teaser out on day eight and just laugh; those 8-15 day teasers have born fruit not. 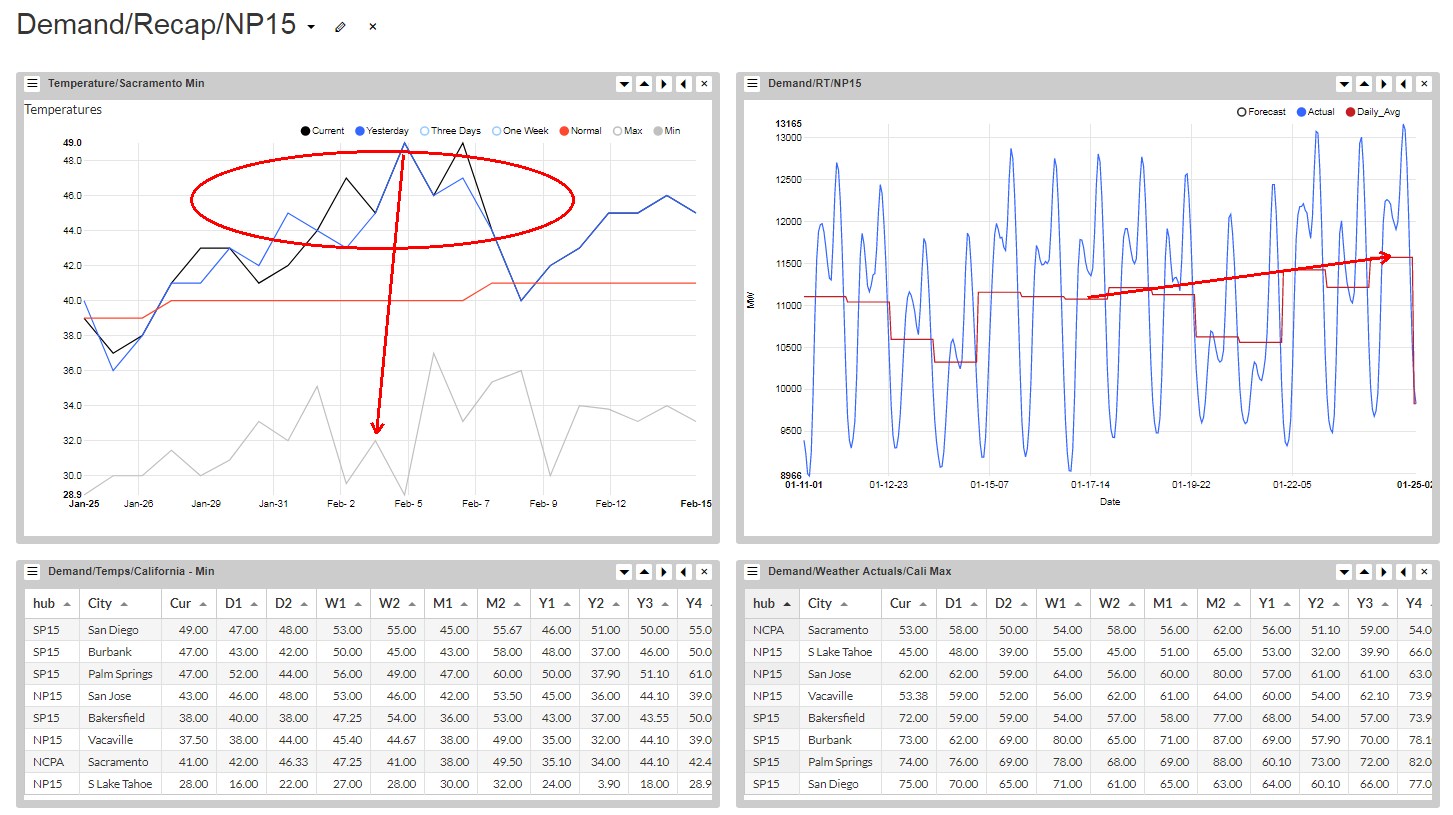 NP’s loads are up off of coldish weather, but that rally will be sidelined by a substantial rally in temperatures, beginning tomorrow and last for ten days. Note the delta between forecast and the ten-year low – nearly 20 degrees. 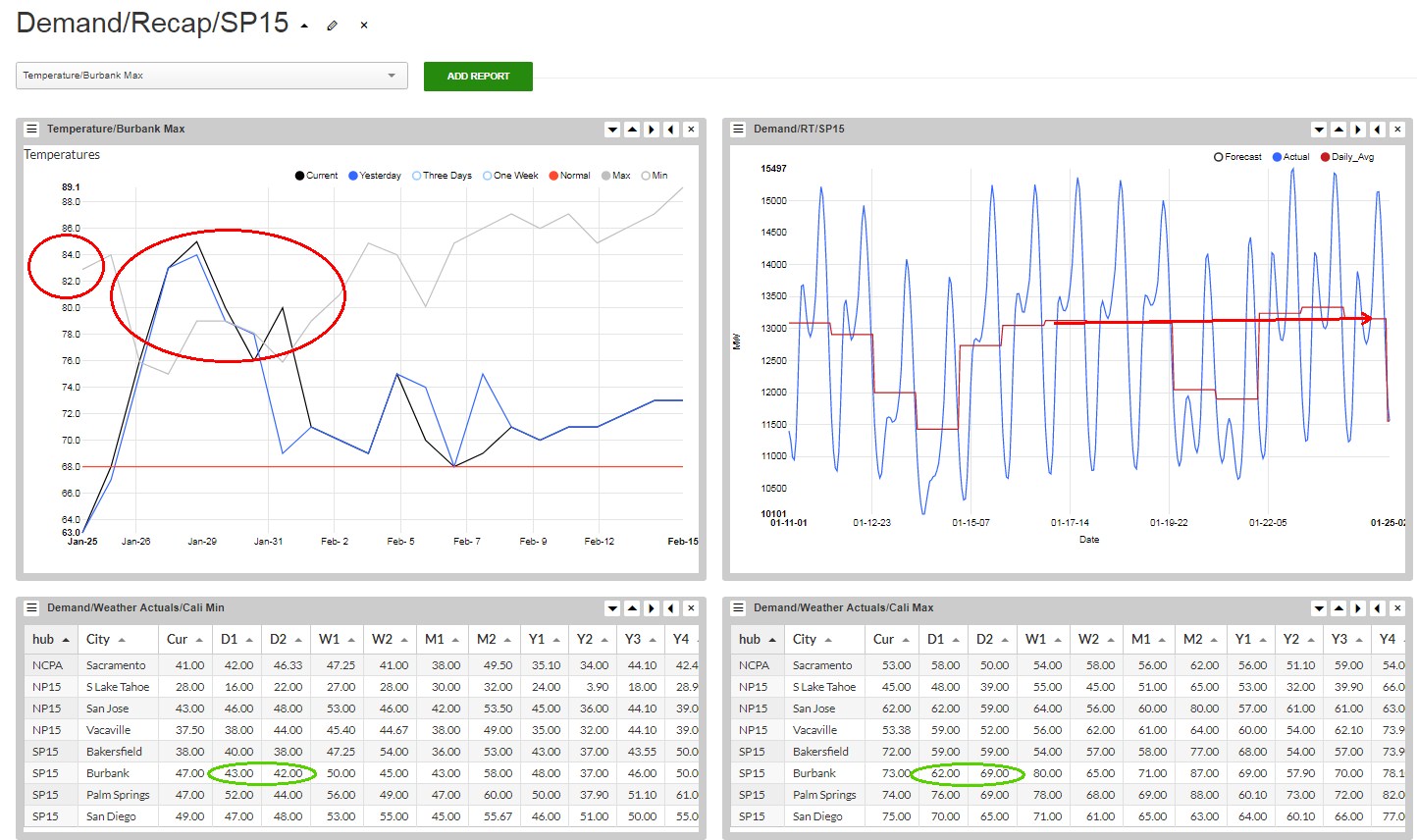 OK, we capitulated; we could not stand it any longer, we threw in the towel. No longer are we wasting our time posting LA lows; we switched to Highs. And good thing, too, as we would have missed the mid-80s next week, which stands to set a new ten-year high. Maybe there are some AC-driven load spikes, but it’s not that hot. Oh yeah, and check out that bitter cold of the last two days. The mid-40s for a low and a mind-numbing mid-60s for highs. 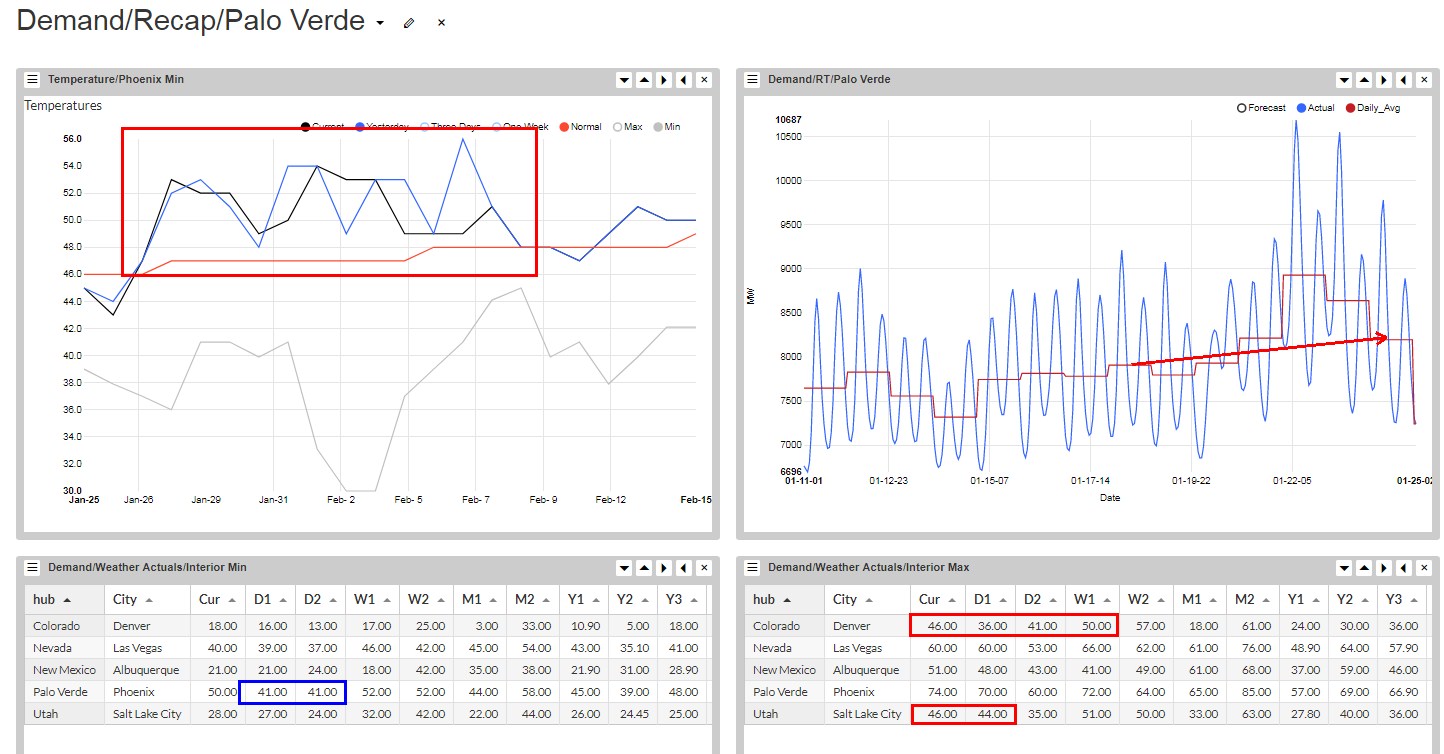 PV loads rallied sharply on Monday and Tuesday; now it is the temperature’s turn to rally. It seems the cold spell has been displaced with perfect weather for the Sun City. Wish I was there. 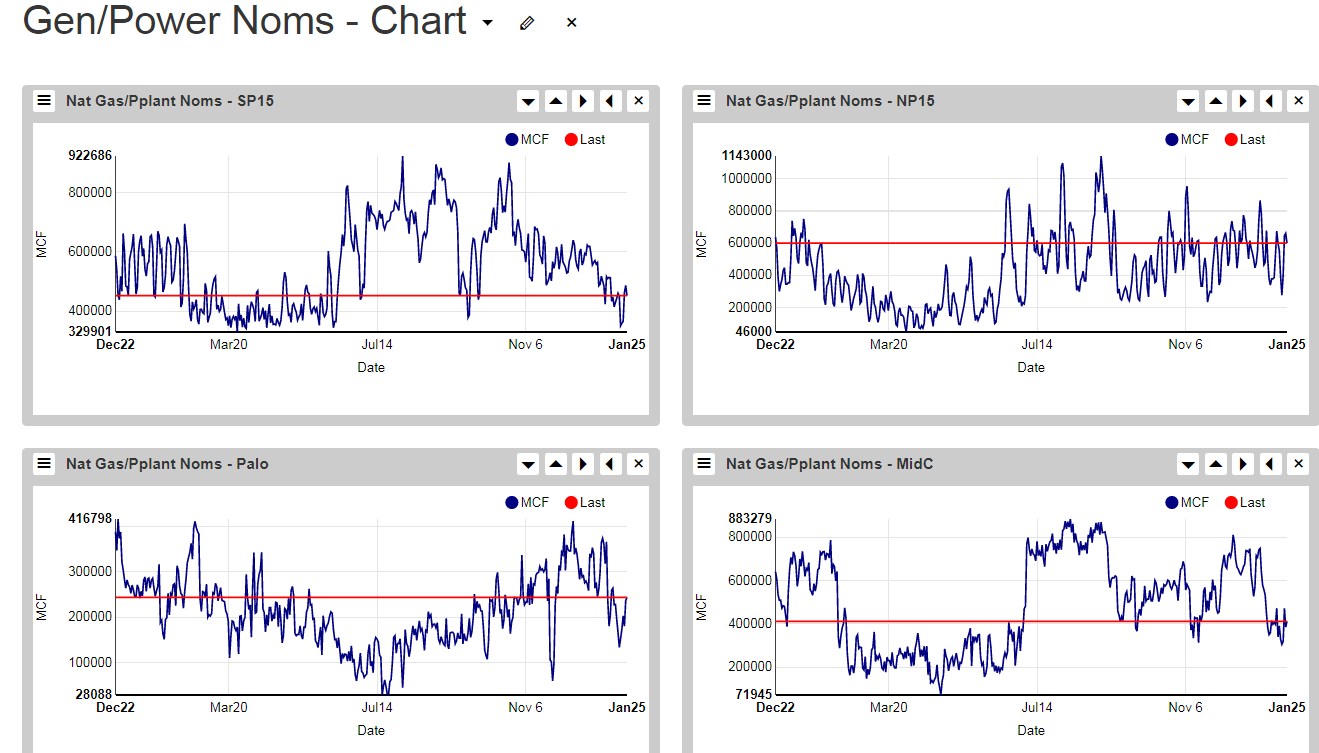 Every hub’s power noms rallied; not a lot, but up nonetheless. SP’s had nowhere else to go after setting a one year low last week. 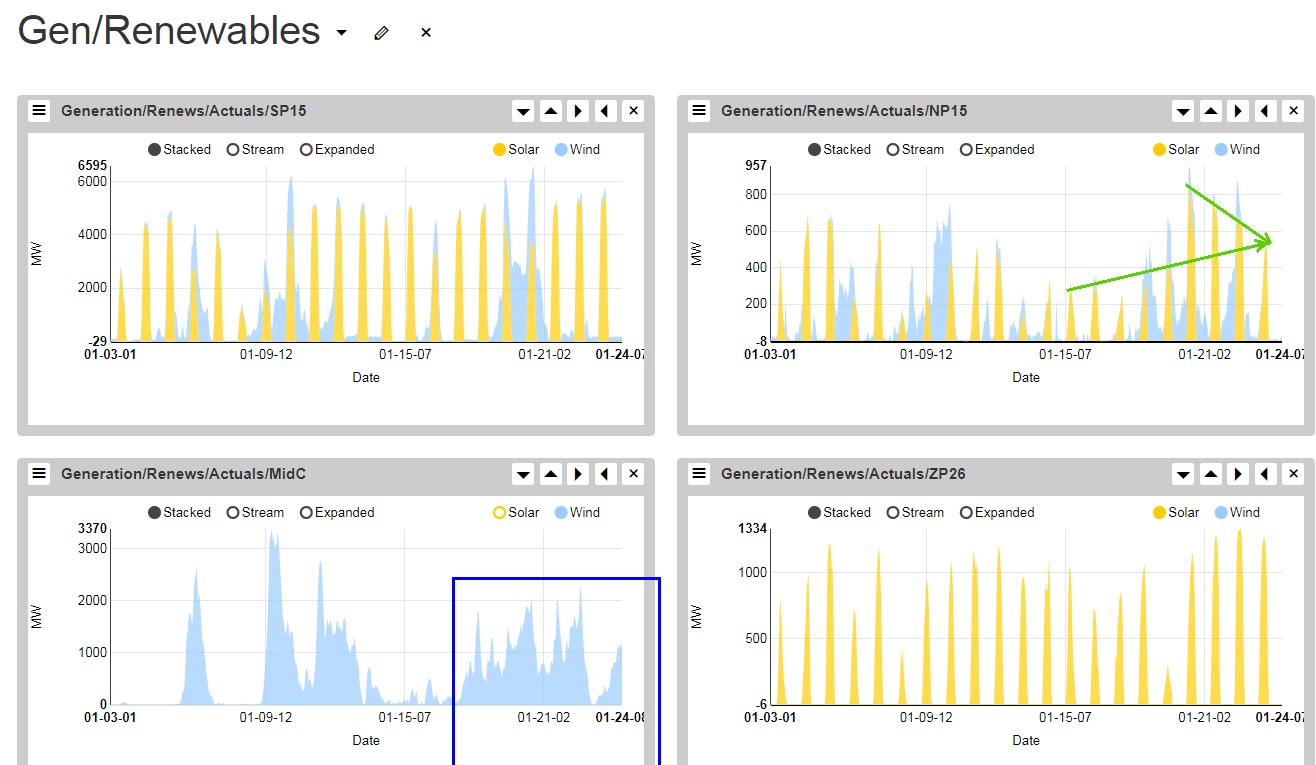 Solar rallied, too; NP’s came back with a vengeance, as did ZP’s. MidC has had steady wind nearly every hour for the last four days, probably adding to its price malaise. 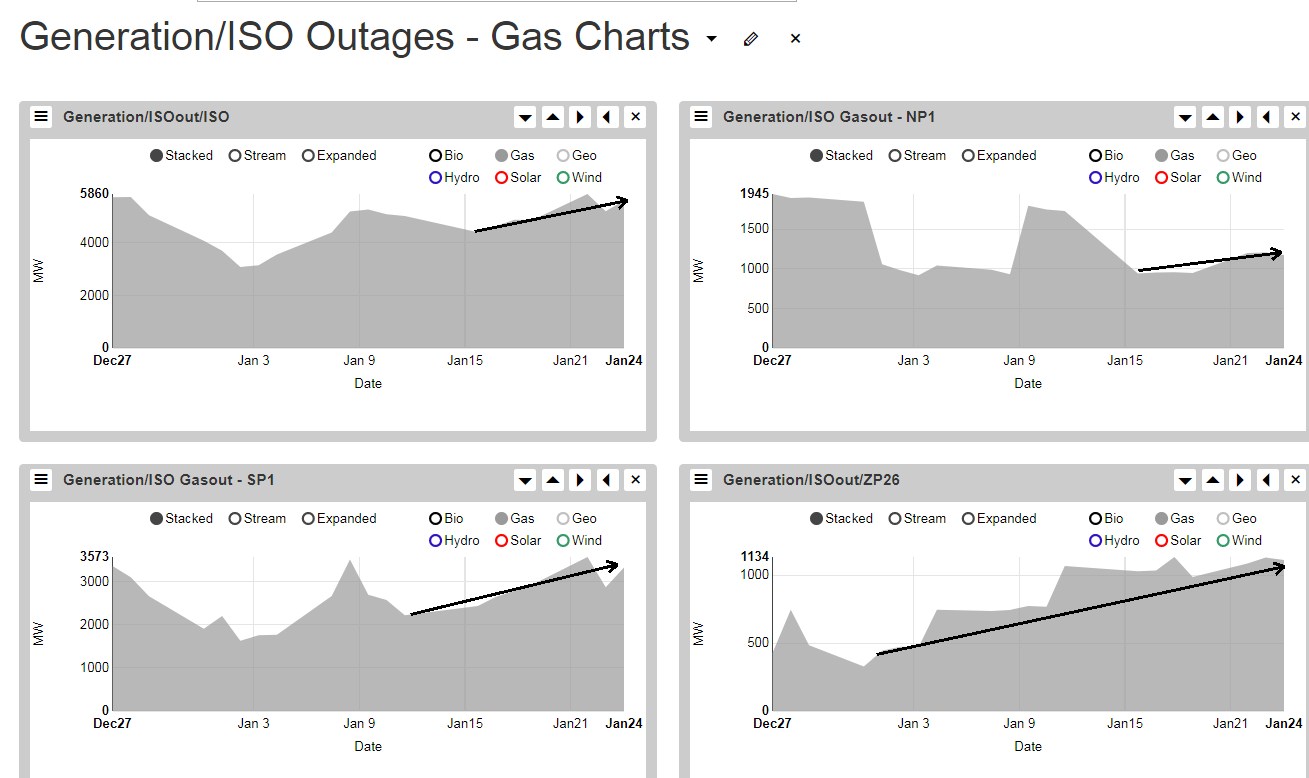 We’re back in the ISO planned maintenance season, each week we’ll see more units taken offline until early April, then everything starts returning to service.

I guess that Phoenix cold was cold enough to force a few gas units to sweep away the cobwebs and fire up. Check out Griffith, averaged 200 MWs where it has been idle for the last six weeks.

While gas traders obsess over storage, power can do the same over reservoirs. The above is a set of plots for WECC reservoirs, aggregated by region. We were surprised at the drafts in BC, now the province is below average, so is the MidC, and Cal finally broke free of its ten-year highs.

Dworshak is filling which is driving those Ice Harbor cuts; Coulee and Hungry Horse are drafting, though the former looks like the drawdown has stopped.

Funny, as soon as the draft stops, discharge craters; QG (and energy) is off about 20%, week-on-week. 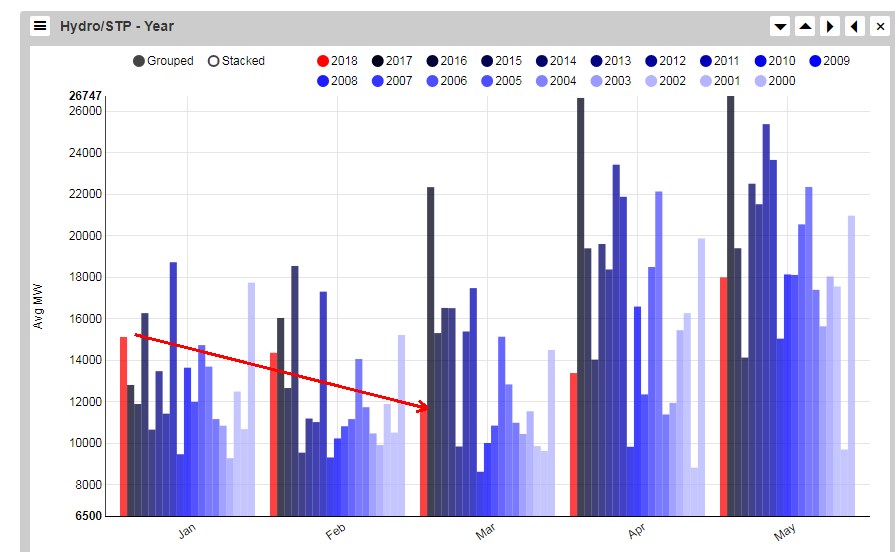 A brief comment on Monday’s STP is warranted. March looks crazy low given the recent builds. We have been loving on that strip for the last few weeks, but our sentiment is swinging to the bearish side of things. One cannot ignore the relentless Upper Columbia snowpack builds and now we’d be inclined to expect deeper drafts at Coulee, some which may spill into March. 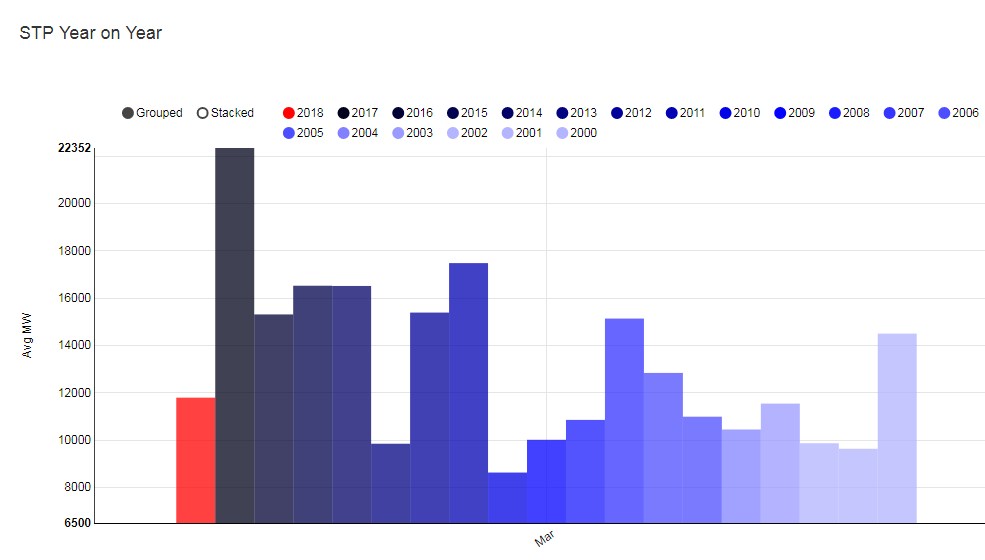 By the way, this is a new STP report we made. Each bar is an actual water year; these aren’t STP forecasts but energy-equivalents of realized water. 2017 was a freak show, but 2018 remains well below any of the last four years, but snowpack in the Upper Columbia is higher. 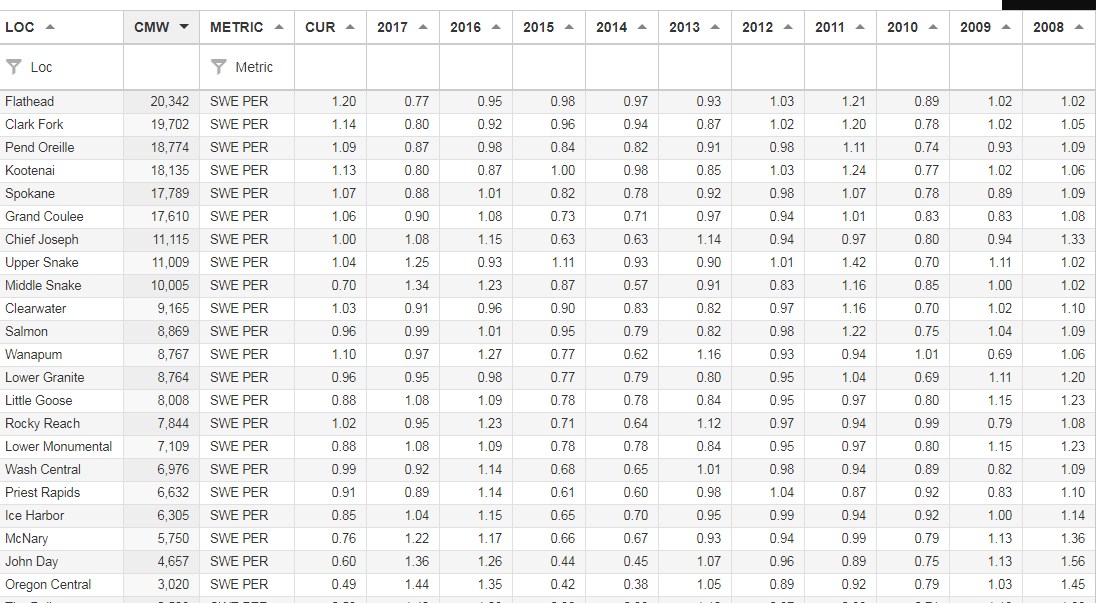 You need to go back to 2011 to find as much snow above Coulee. Sure, the rest of the Northwest is just average, but it is the deep Upper Columbia snows that will drive an extended runoff, one that could potentially spill into July. At this point, June is starting to look weak.

Same data, but looking at recent changes, and the builds just keep building. Hard to stay bullish in the face of this reality, but we’ll look to Mr. Market before we make buy/sell calls.

And the builds will build bigger over the next ten days; check out those Spokane numbers, nearly 100% greater than average. Sure, the 8-20 day is dry; but it’s been dry in every forecast, yet the next week its wet again. Time for a Trump Metaphor …. there is as much chance of zero precip over the 8-20 day as there is Trump admitting he’s a liar. 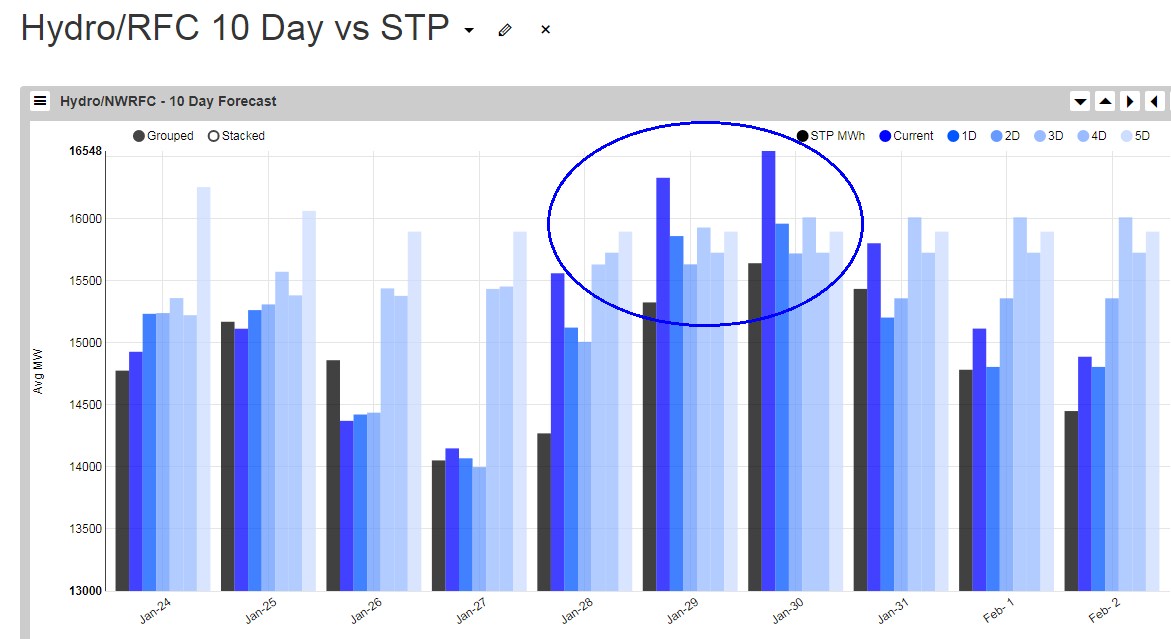 The RFC is picking up some of this added precip; its ten-day is showing bumps over and above the STP.

BC is back to importing; the AC and DC are camped on TTC, and Palo started selling more into the ISO. No new outages to report.

We are growing more bearish on MidC runoff, but let’s turn to the market and see what lurks there.