We’re changing our game a bit; each market post will now include a few MidC bullets because its the runoff and these markets are fluid, can’t wait a week to comment on them. We’ll begin with a brief scan of the term stuff, then conclude with our thoughts on the runoff months at MidC (Feb-Aug). 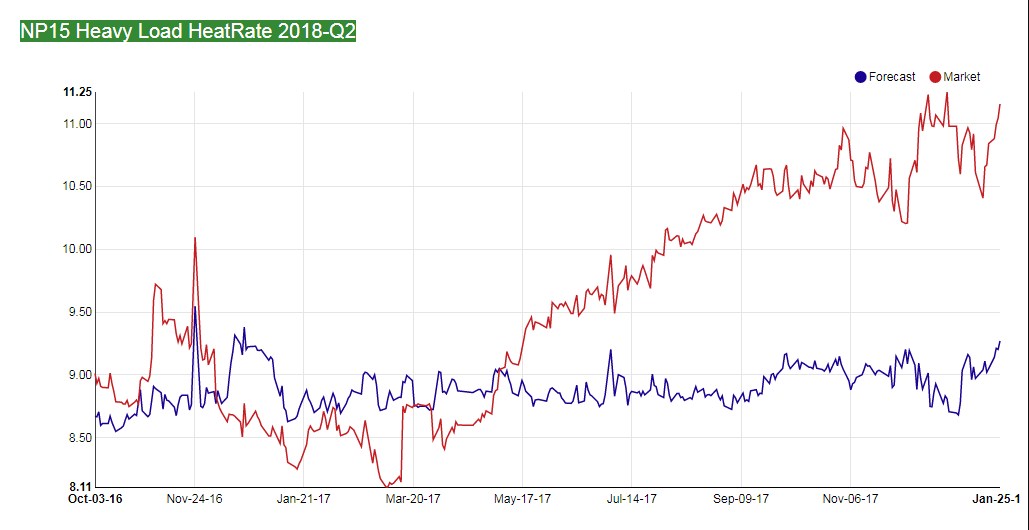 It is hard to short the ISO in front of a potential record dry year. High reservoir levels will dampen the impact of the draught, but the ISO will be 2000 MWs (flat) shorter this spring than last. That said, a mild spring (not hot) and these levels look rich, especially in the first six weeks. 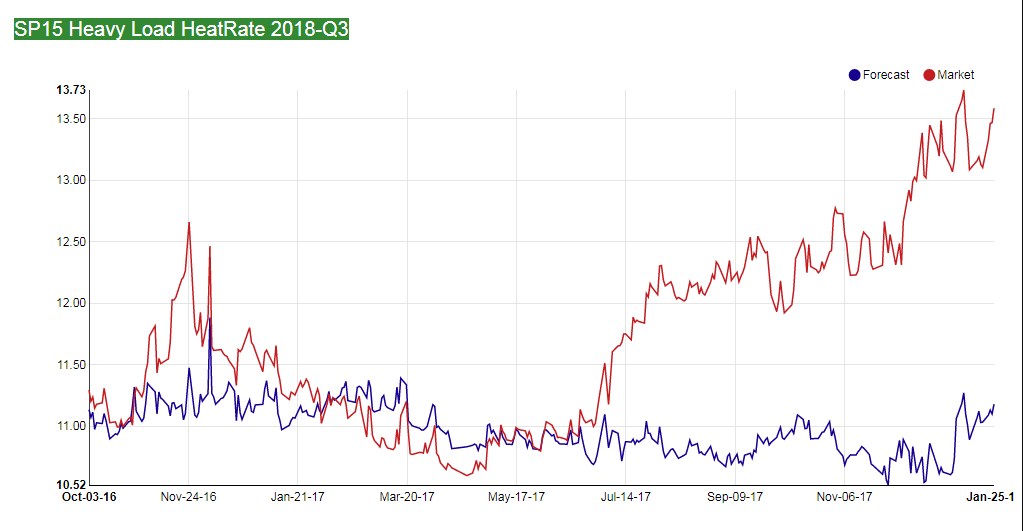 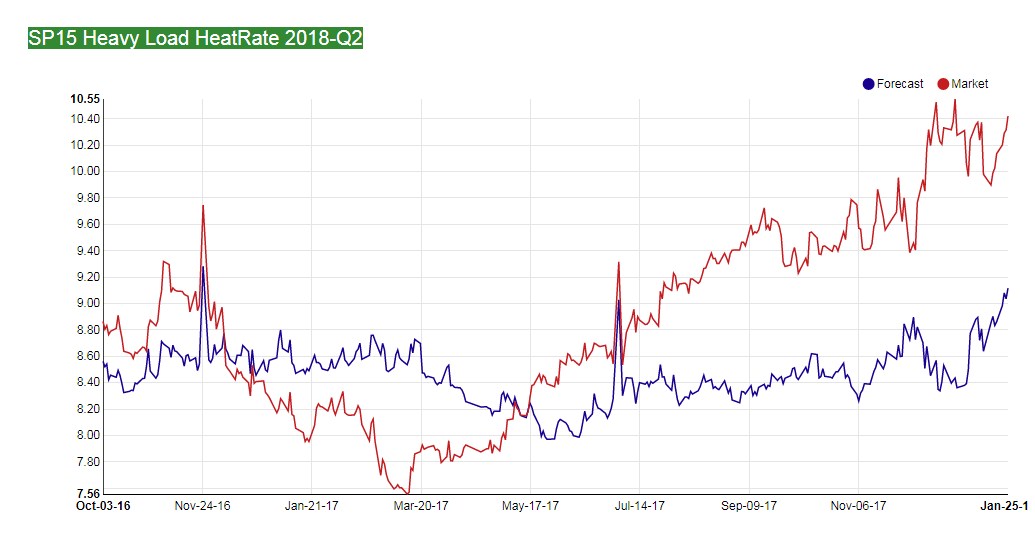 Everything ISO spring/summer is up; would take some bearish cash to beat this backdown. We’d just avoid CA at these levels and focus on the MidC. Maybe use NP or SP to offset a net short Northwest book? 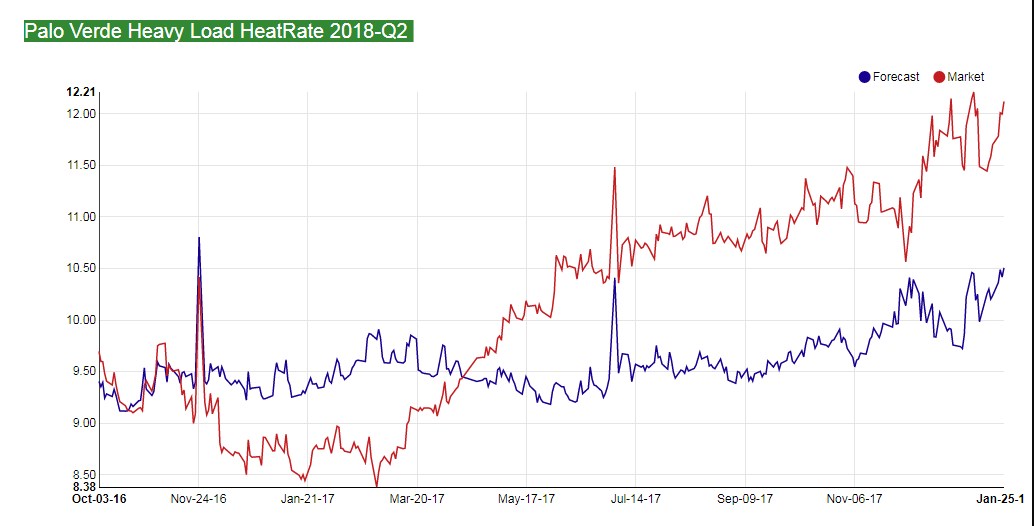 Same with Palo, no compelling reason to pile on shorts anywhere south of COB, unless these go higher, then you may have no choice but to sell. 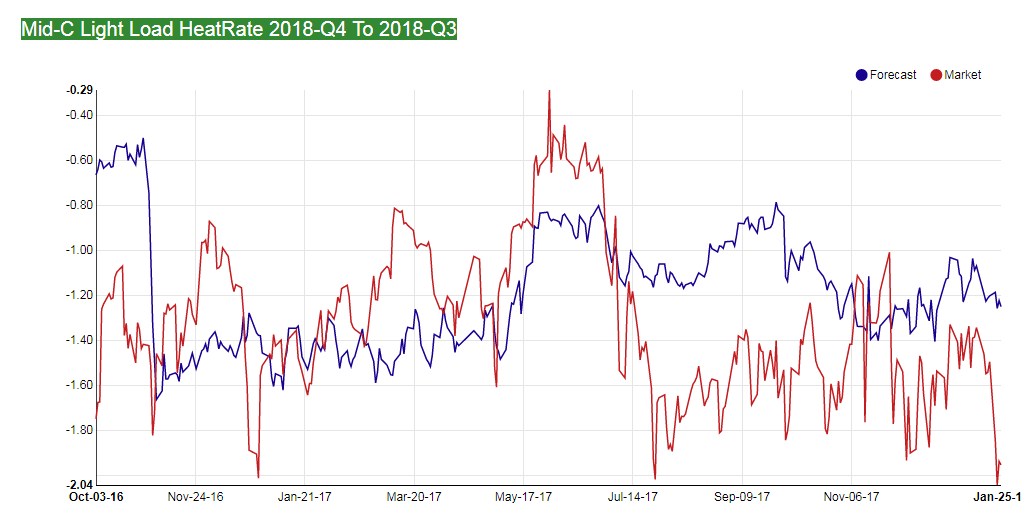 This is the first compelling Q we came across; the Q4-Q3 LL roll has just set a contract low. Our take is the snow builds are huge above Coulee and in BC; the runoff will be extended into July, and if this keeps building, into August. If anything, the rolls should be widening, not collapsing. We’d buy this all day long. 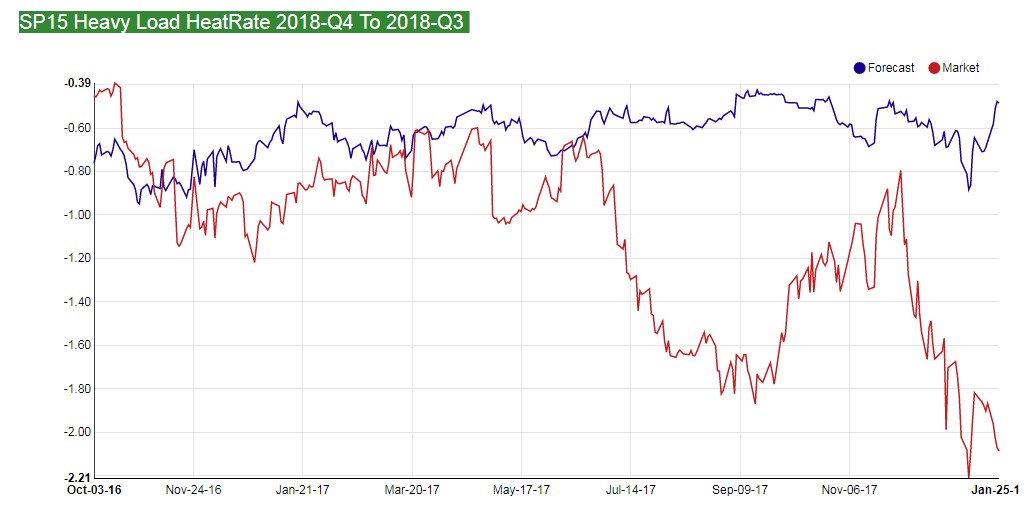 The four is scorned, but no one wants to be short the three. At these levels, we’d start thinking about buying. After all, October has been a historically very hot month for Socal and the DC is down half the Q. 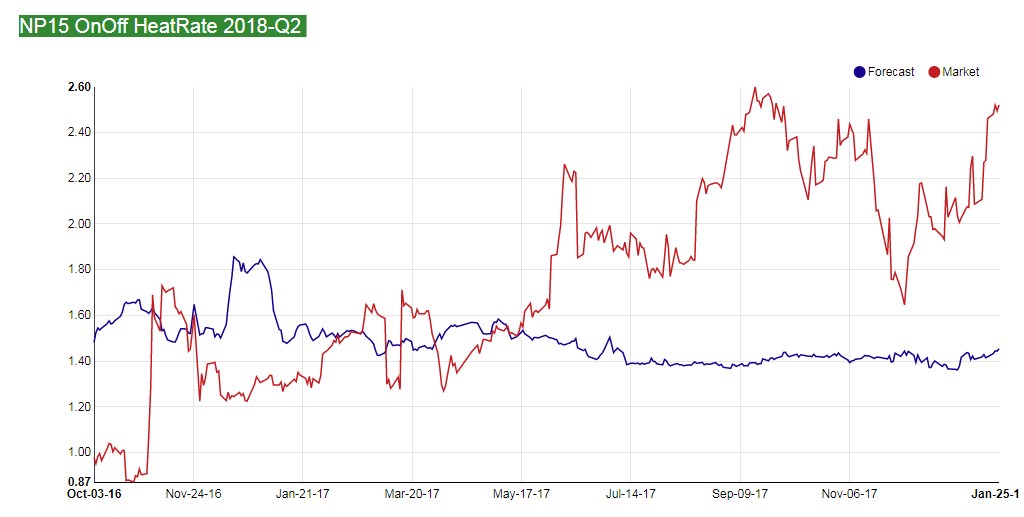 The On|Off is at a new contract high, but we’re not sure that is the right place for this Q. After all, NP is going to have a very weak runoff; most of what does come down will be captured in the ponds; LL will bear the brunt of much of those cuts in discharge. We’d sell it.

This is also a contract high, the Q219-Q119 HL at SP. Really don’t know what’s driving this, aside from a weak 2018 Q1. In the final analysis, the value will be set by what happens in Q2 18. If you’re wildly bullish there, I guess you’d be buying this; we aren’t that much and if anything would sell these highs. 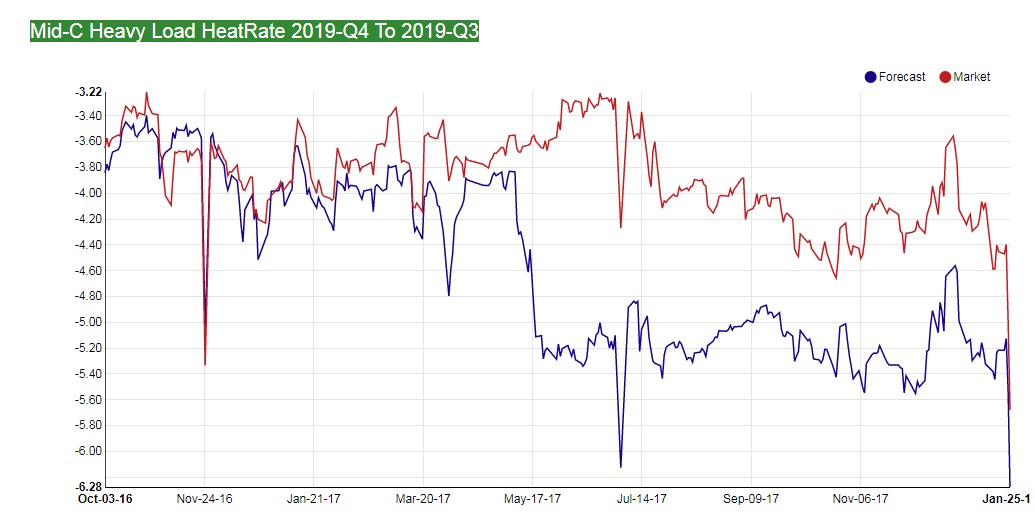 These most recent markets must be gas price drive since both the forecast and market crashed together. Maybe the market ignored power while the gas traders pounded the Q4 down? Either way, we’d buy this given that our sentiment is now leaning bearish July, and very bearish June, which will set up the Q3. 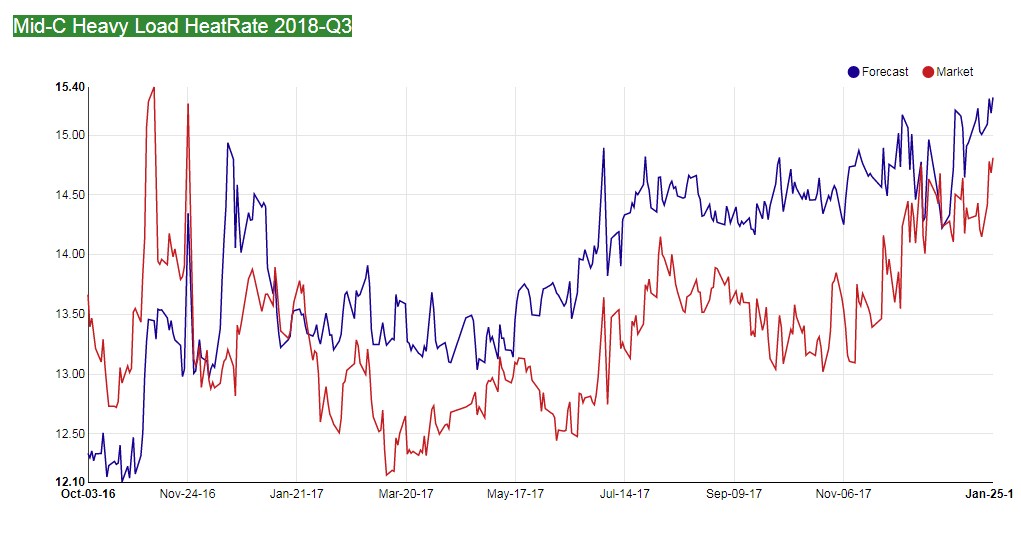 All things Q3 are rallying, but we’d suggest the MidC should be falling with rallying snow. 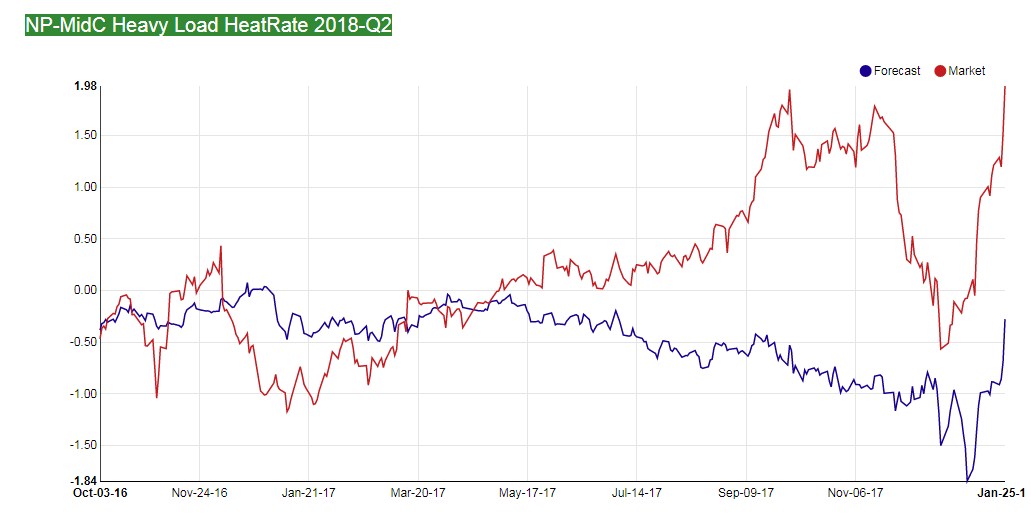 A new contract high, but hard to dispute this if you looked at just the hydro spread – the North is soaring, and the South is crashing. But enough is enough, and at some point, every market is a sell. This is getting close to that place. 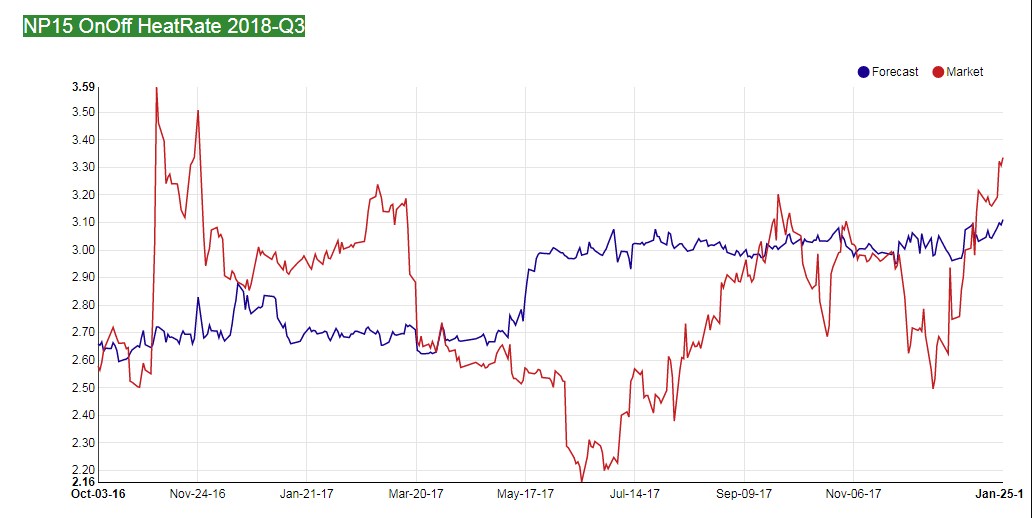 The On|Off in Q3 at NP has been on a nice rally; now it is quite high, but we’re not sure we disagree given a dearth of water. 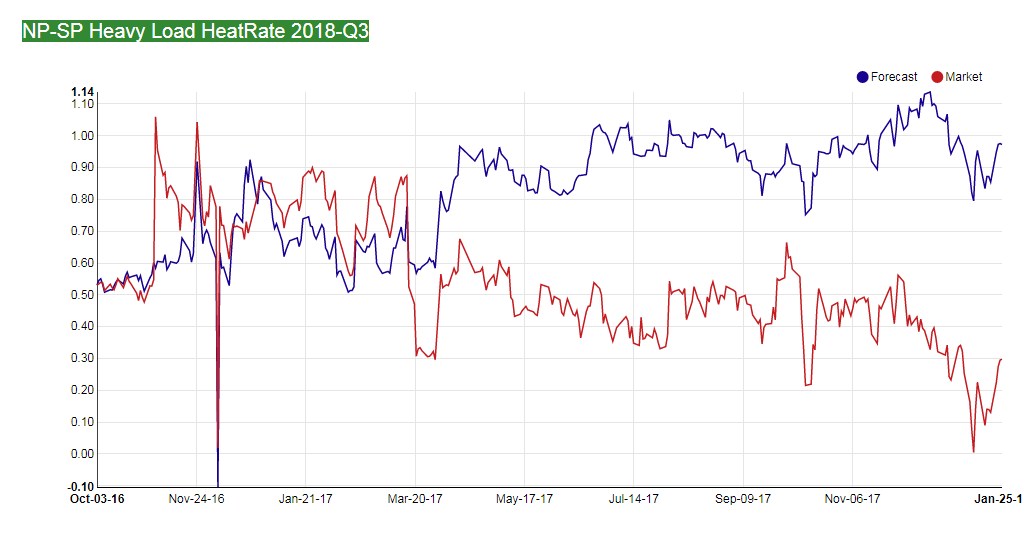 We talked about this a few weeks back; the NP-SP Q3 HL spread; it hit a contract low and bounced, but we think there is more juice left and would buy into the rally.

The next batch of TradeRanks are just Mid-C; why? Because there is more volatility/liquidity/opportunity here than in the rest of the market combined. 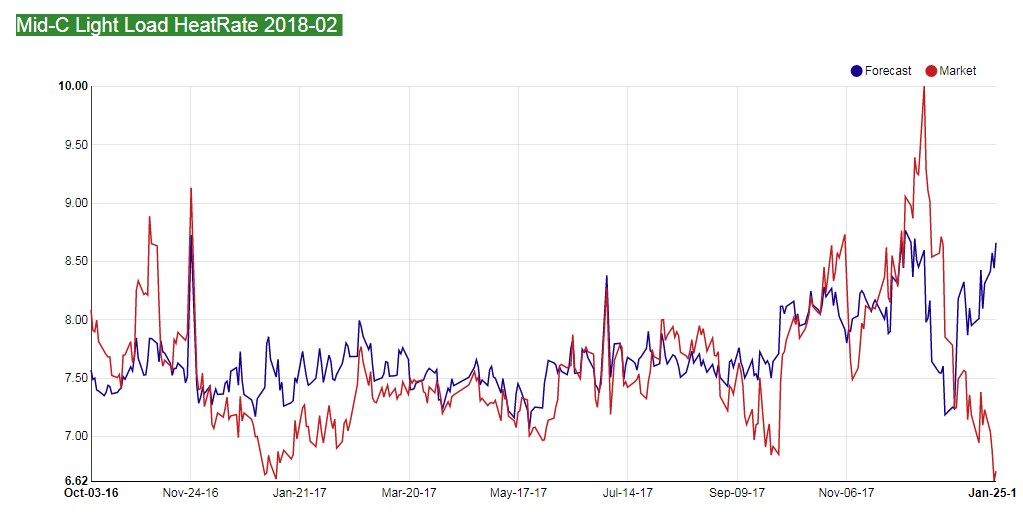 The market has destroyed the Feb LL, now it is over-sold, and we’d buy. Big runoff won’t impact Feb, there is no low-level snow this year so don’t expect big Feb flow surges. Everything (drafts) will be regulated and all point towards a brutal April, maybe some in March; little in Feb. 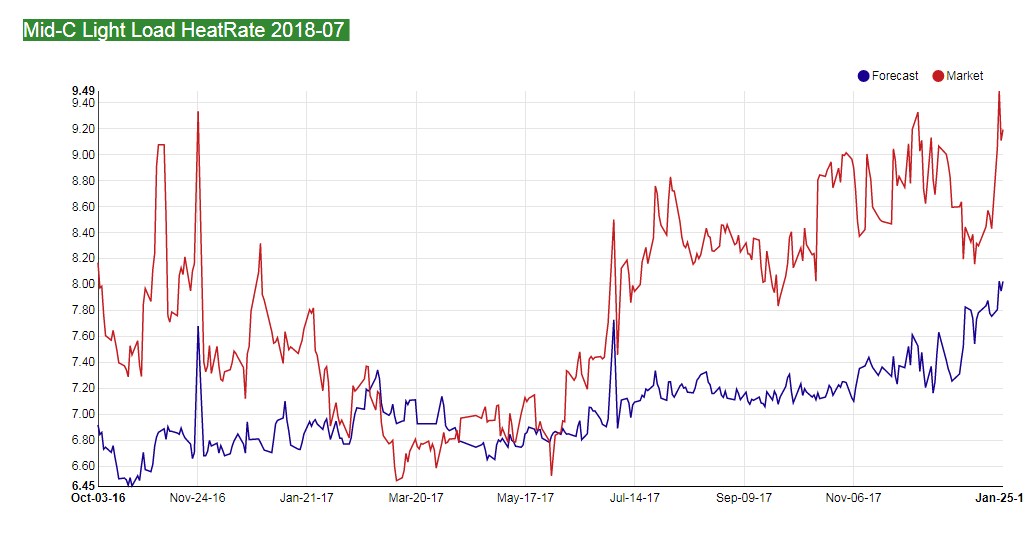 Careful here; July is increasingly looking more bearish to our tired eyes, yet the Market thinks differently. At these levels, we’d short hard. 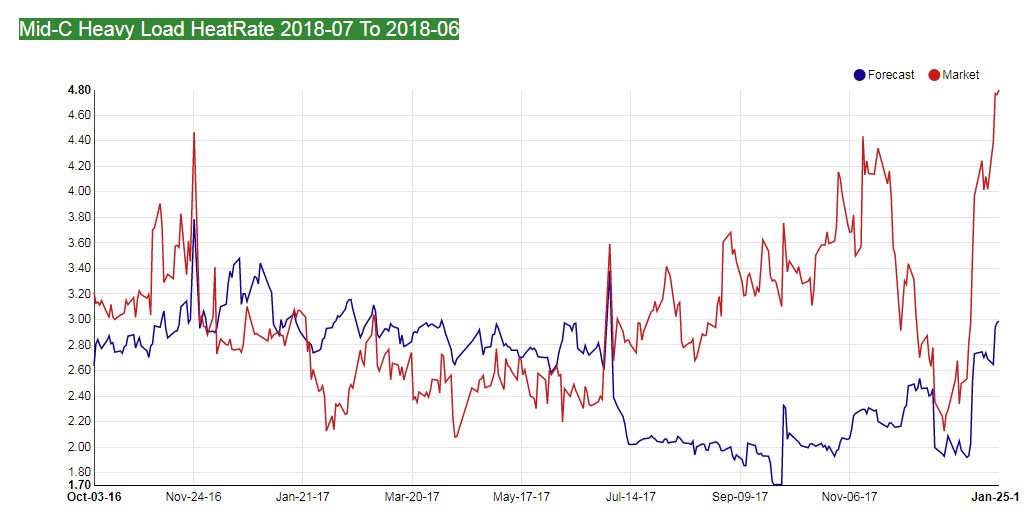 We saw the July outright take off, which is driving the July|June roll, but with big snow above Coulee the runoff will “trickle” into July, and we think this is overdone and would short it. 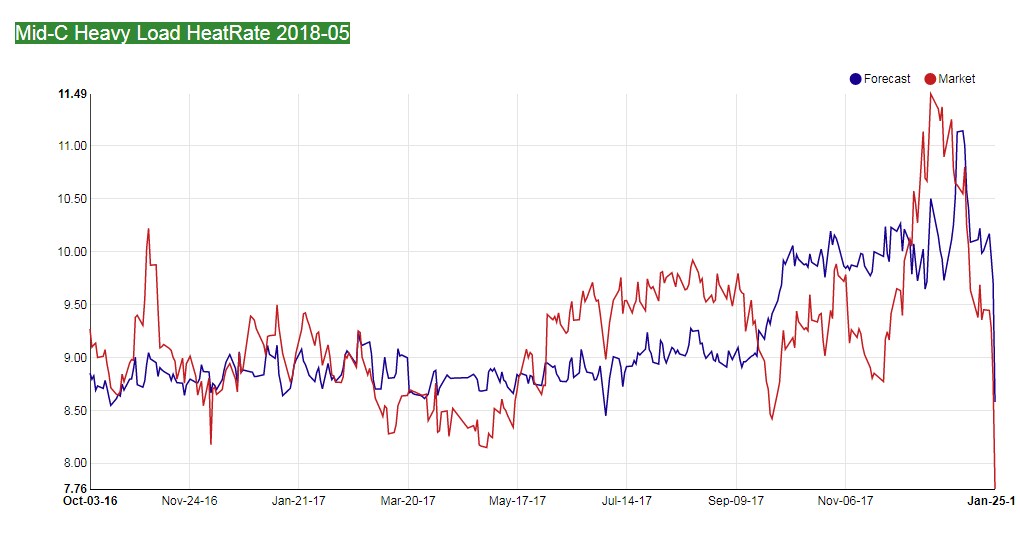 The market hates May HL, but everything is a buy if it’s cheap enough, including this. Big water supply means big April draft means big May refill. If cold spring, May can be tight and we’ve seen BPA’s amazing talent at keeping gas on the margin. The downside here is that April gets destroyed which will pull May down, but at these levels, we’d just buy it. 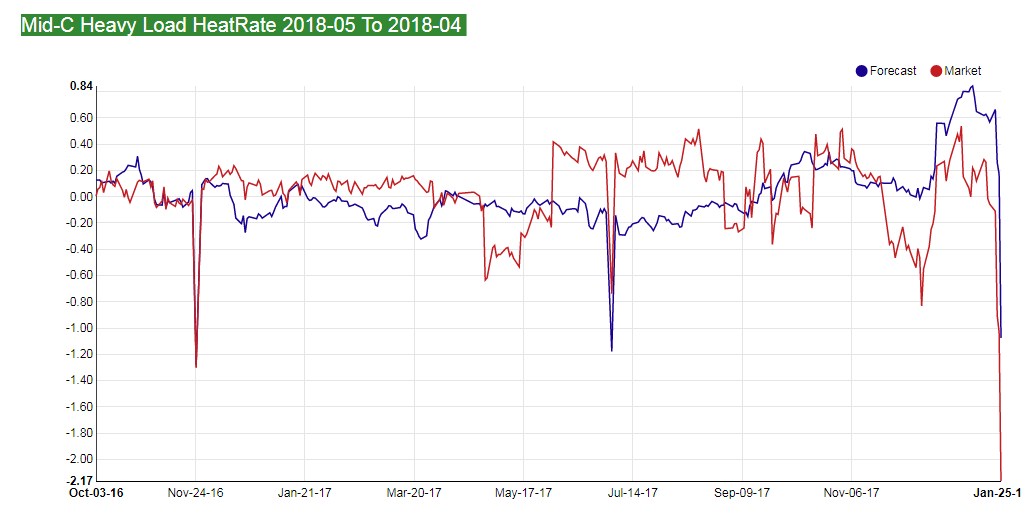 Here is a ridiculously priced roll, the May to April. April premium? Are you kidding? We think the draft grows, all of which will pound April making May more bullish, not less. Yours, we’re buying this roll. 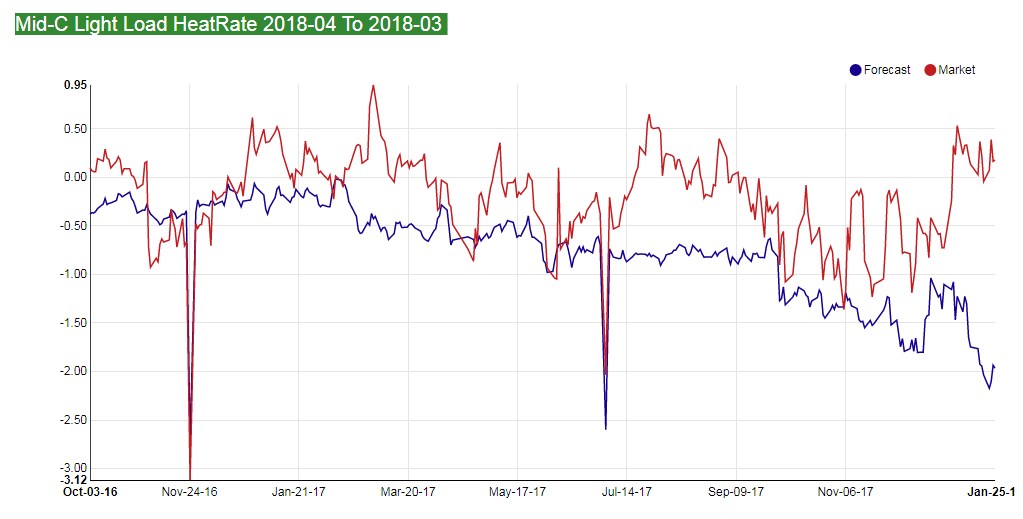 Even the April to March is rallying, but we think it should be tanking. Sold. 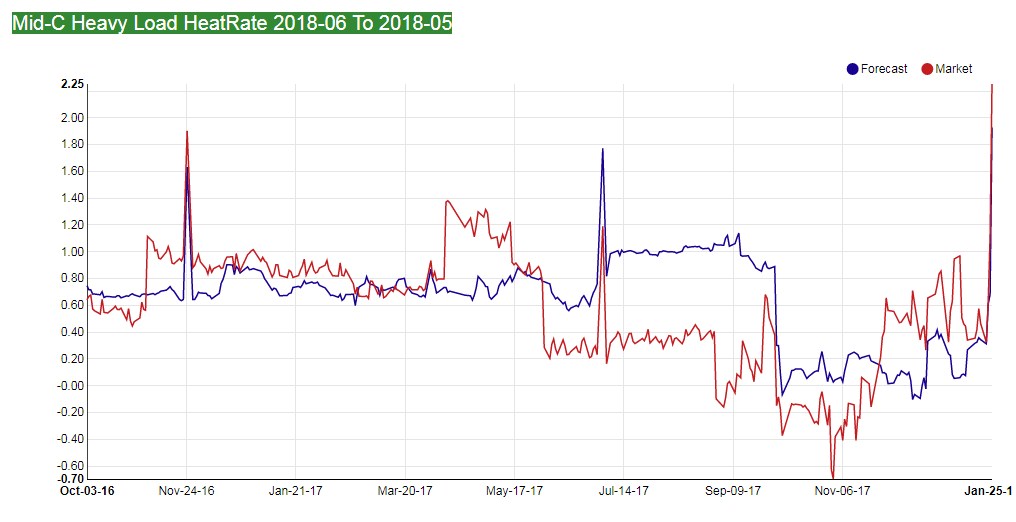 And June to May is stupid high; big snow in high elevations means late runoff, means June, not May. Sold.