We’re switching things around today, doing the APT first because our Scraper Server went down over the weekend; it’s running now, but want to wait for an hour to get the hydro updates.

Today we are adding a new section to our “APT Front” that looks exclusively at the Mid-C HL bullets. Why? Because this is runoff season, my friends, and these strips are where the gold is. That section will run at the tail end of this report; the rest will remain in the same order (Best, Rising, Falling).

These are the trades we gleaned by sorting APT ascending and filtering on Agg=M: 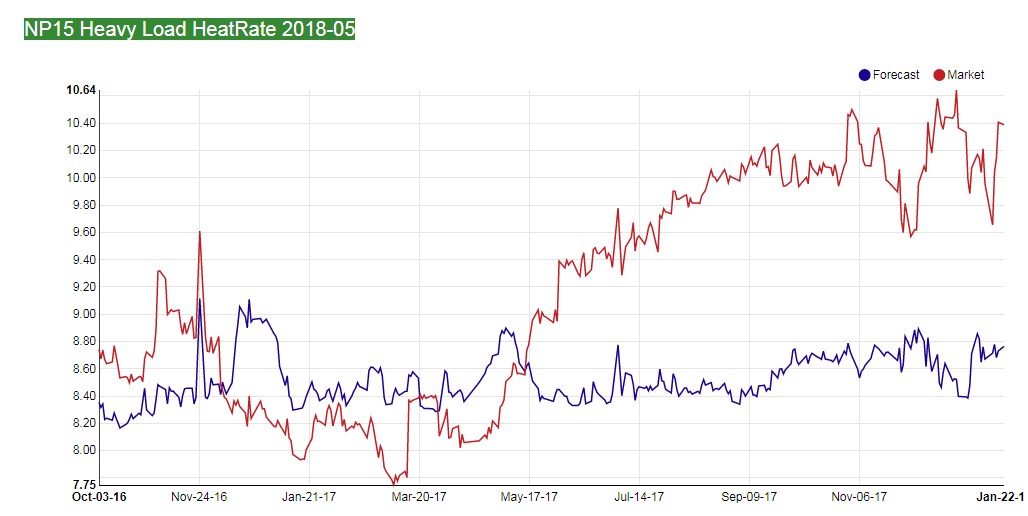 The NP15 May HL is off to the races, and we really can’t disagree. This is a very dry year for the land of fruits and nuts and should trade at a premium to last Fall’s values. If the market thought NP May was worth a 10k heat rate in October, it has to be worth more than that in January when the runoff outlook is < 70%, right? Buy the dips; we’ve seen two so far this water year. 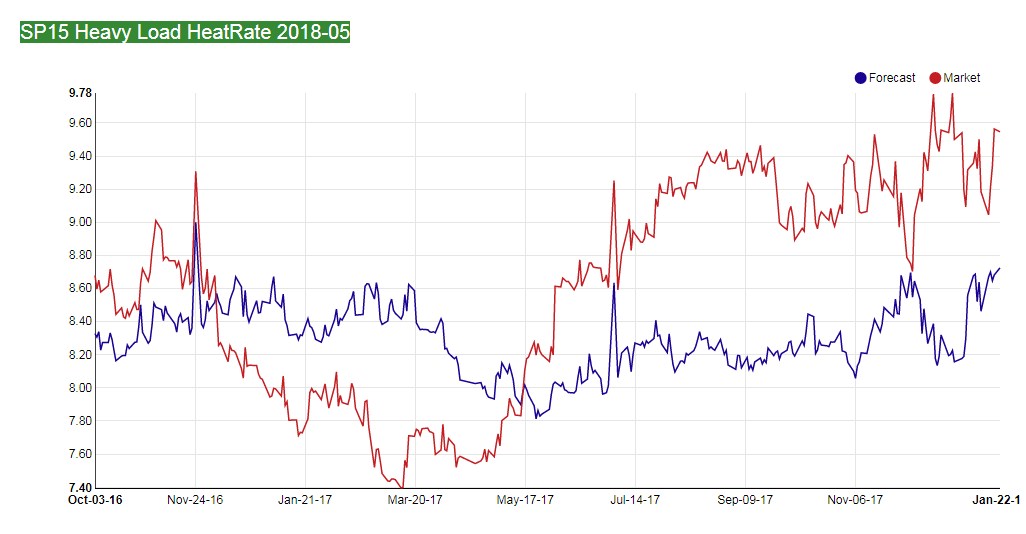 The sister trade to the above, here at SP15. Socal, like Nocal, is bone dry and the entire ISO will realize 2000 aMW less hydro per hour for most of this year.

Chew on that chart, a plot of average weekly ISO hydro energy over the last five years. The model water years, we believe, are 2013-15; contrast those three with WY17. The delta is what we’d expect to be replaced with gas-fired generation. 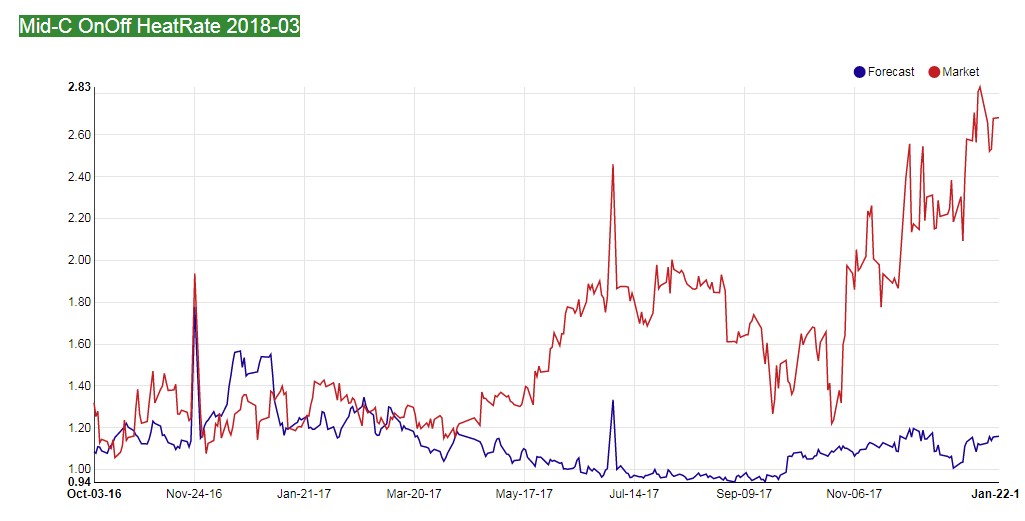 The market just does not believe in the Mid-C offpeak, especially in March. After setting a contract high, she has pulled back a touch yet remains near those highs. We’d be more inclined to short this given no Coulee draft in March (at this time). 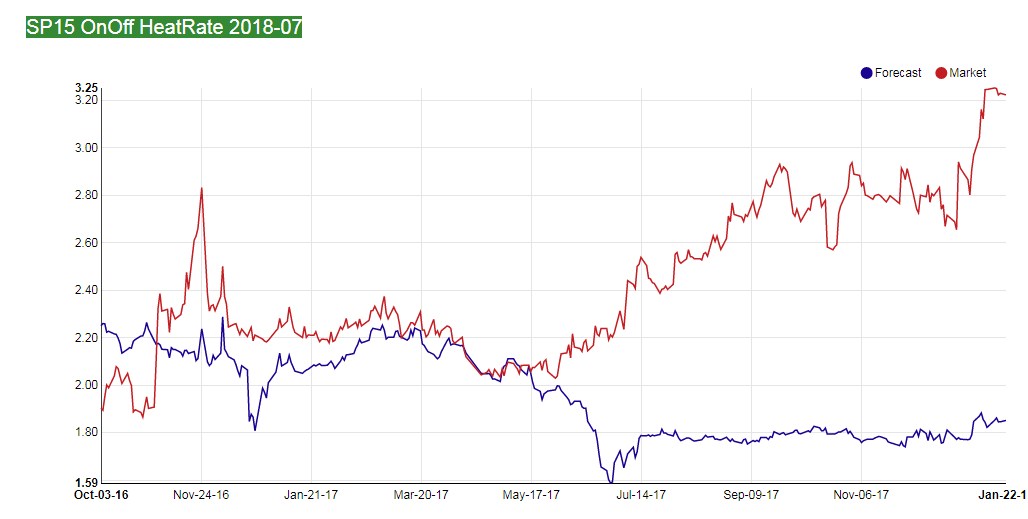 July’s SP On|Off is quite rich, but in a dry year, it should be, especially in the warm times we live in. Not sure we see a cash settle that pays the longs at these levels but do you want to wear this for seven months to find out? And, it only takes a heat wave to wipe out all your gains. Better runoff action elsewhere, we’ll pass. 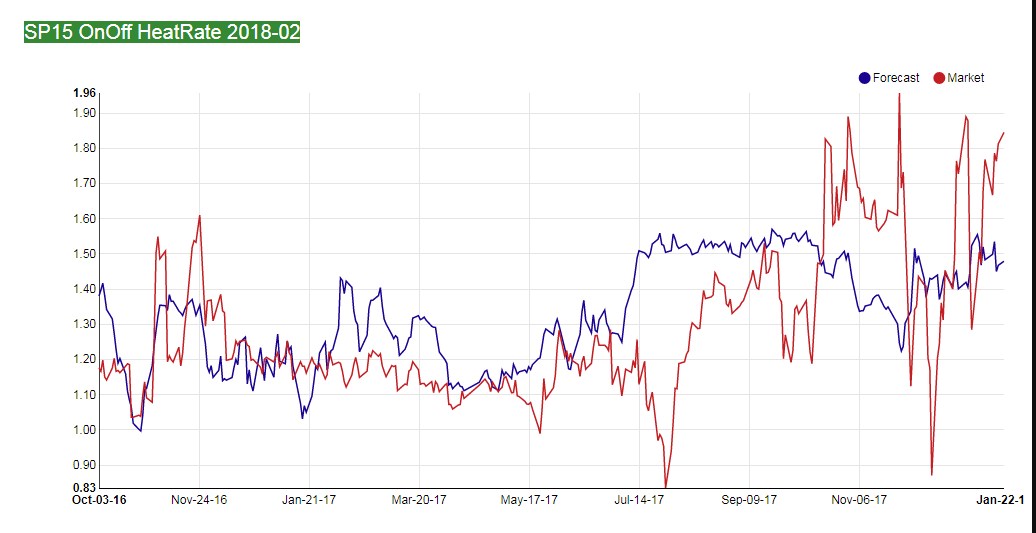 This On|Off, at SP in Feb, is not for the faint of heart; talk about bitcoin volatility, the market just can’t make up its mind what the strip is worth. We’d be inclined to sell it, only because every contract high paid the shorts. 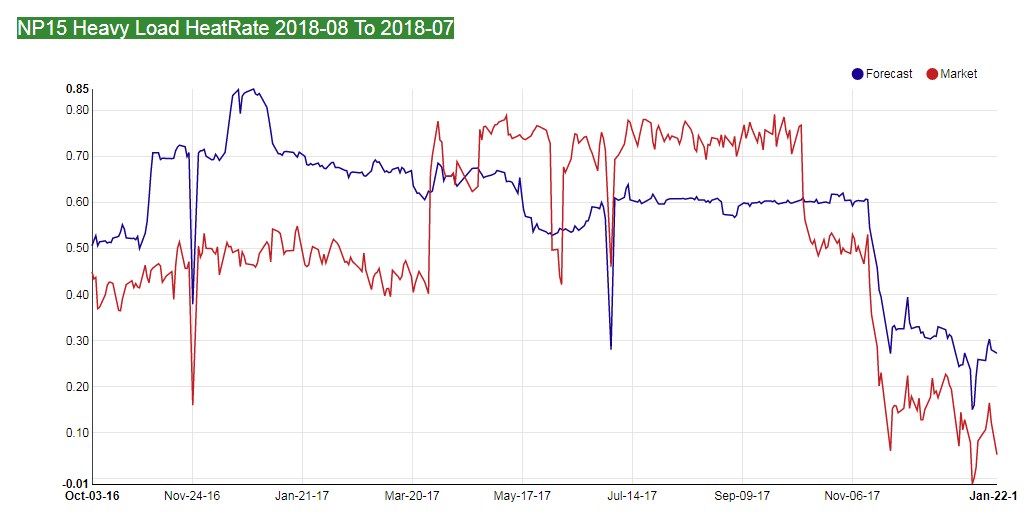 Way out in summer, the Aug to July roll is dirt cheap, but maybe rightfully so given the low snow depth in the Sierras. In a big year, like last, the melt extends all the way through July, but this year the snow will be gone by June leaving just regulation in the rivers. Still, it’s cheap but doubtful it goes anywhere unless big snow slams into the mountains. 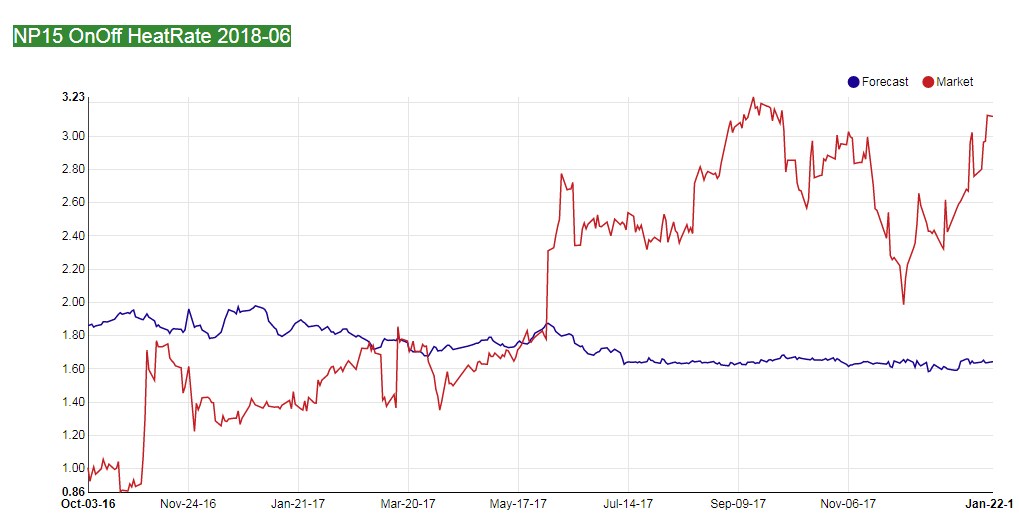 The June NP On|Off is back to a contract high and not sure we agree for the same reasons as the SP HL.

The above is actual LL ISO hydro energy in May. Check out the dearth in the dry years, like 3000 aMW off of last year. If last year is at all priced into this deriv, then it is over-priced by that amount. 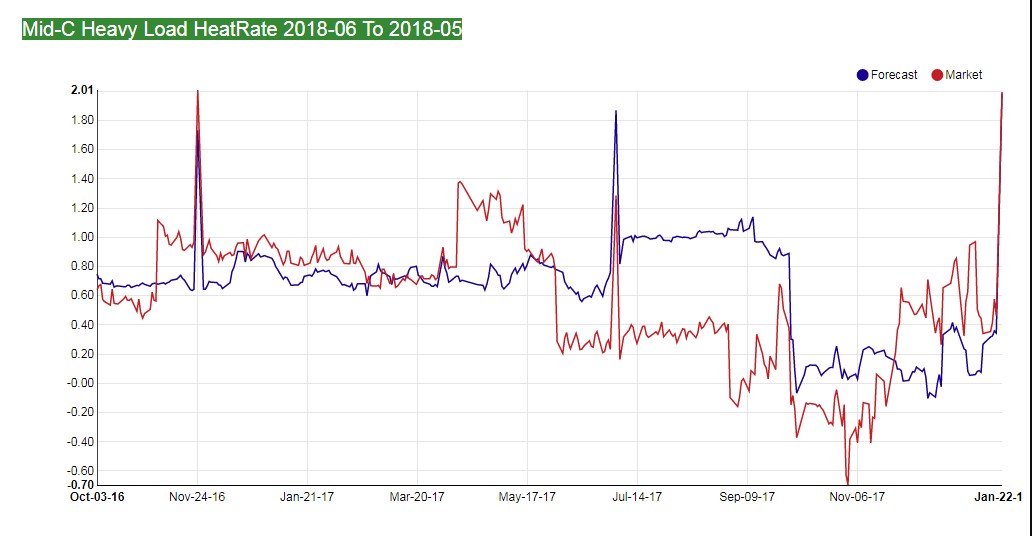 Oh My, you love the June long time while scorning May – why? Contract highs, but there is a higher chance for the most significant water to hit in June than May. There is also a chance for cold a May which exacerbates the problem with putting June too premium. A lot of unknowns, but the one “known” is this is now at a contract high, and we’d sell it. 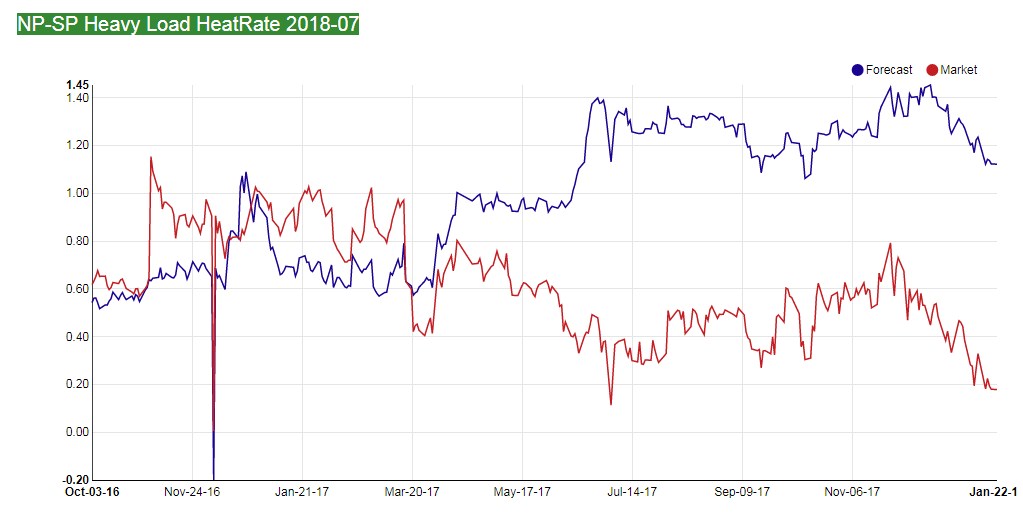 Intra-California spread in July and is now at a contract low. The dry year will have a more significant impact on NP than SP if anything the spread should be growing, but most likely its repressed by Socal’s gas issues. 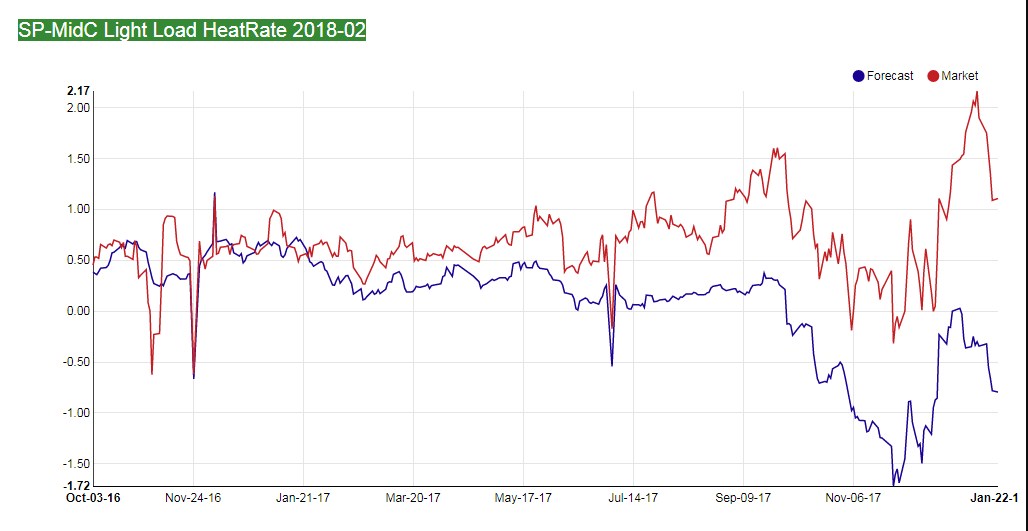 This is one of the “Falling Stars”; the spread has been pounded and is near value. Without cold, in the Northwest, we see no reason to stay short any longer and would buy back. 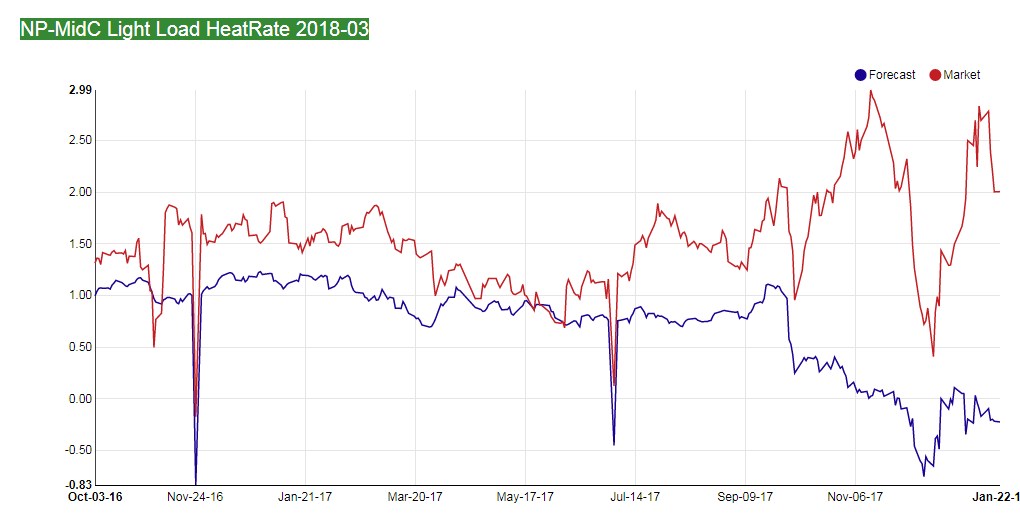 The March NP|MidC LL also cratered from a contract high, and we concur, given that there is minimal drafting during that month. That said, if it comes off much more, we’d go long given the dearth of water in CA. 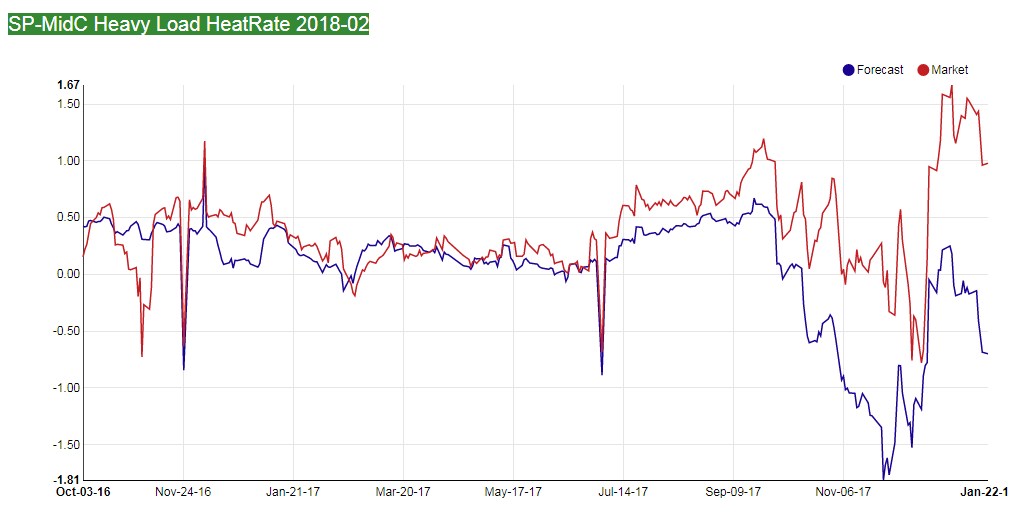 Same trade as the Feb LL, this is the HL, and after setting highs has come off, though probably more from a change in gas than power, given the Forecast moved the same. Still, it’s rich, and cash has weakened inside the ISO, but we’d wait for confirmed Northwest cold and would be inclined to take small profits.

The above table was constructed by filtering on Mid-C outrights, HL; then sorting on Period ascending. You can do that with any hub or derivative. Each Monday, throughout the runoff,  we are going to look at just a Mid-C play; some weeks it will be the On|Offs, others the rolls, and sometimes the outrights. Today it’s the HL outrights. 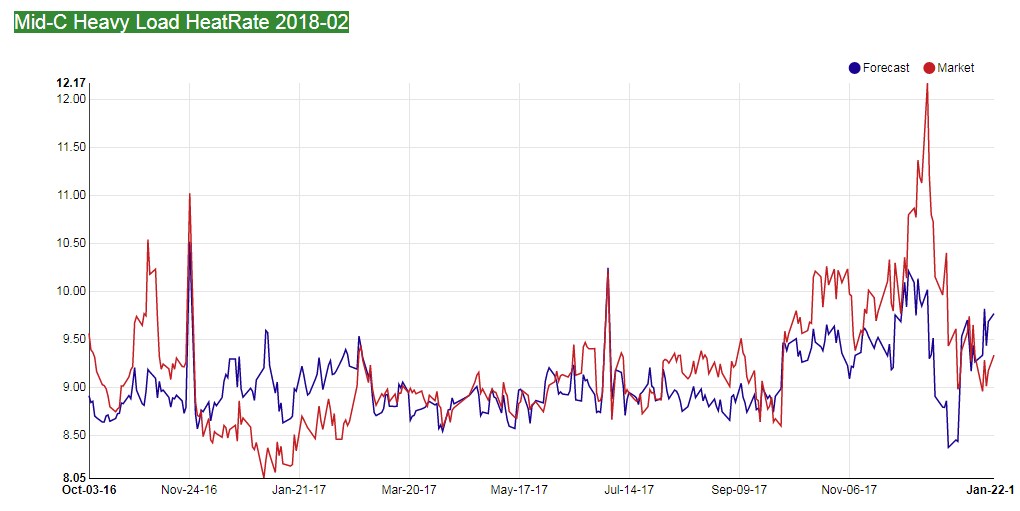 Since the market’s December stupidity the price has settled into value, perhaps on the low-side of things. Given no strong bullish sentiments at MidC it is probably reasonably priced, however, if we had to do anything, it would be a buy at these levels; only because it is cheap.

The March remains a buy, in our estimation, mostly given the NWRFC’s very low forecasts for that month. 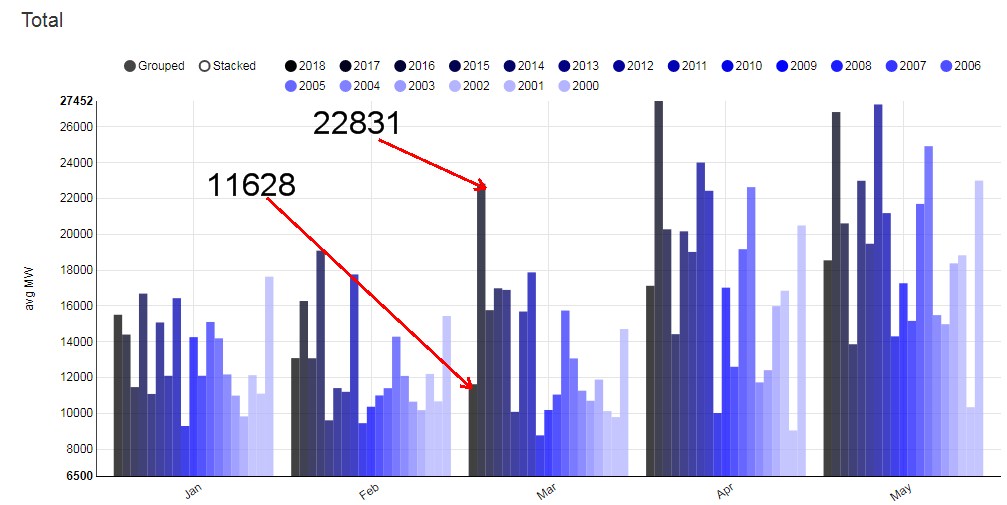 The most recent STP is projecting 11,628 aMW of flow-equivalents, while last year actual flow equivalents came it at a mind-boggling 22,831 aMW. This year is lower than any of the previous seven years, except 2013.  NOTE – this low forecast may suggest it is too low, given where actual water came in during past years. We think the STP has to jack the March at some point. 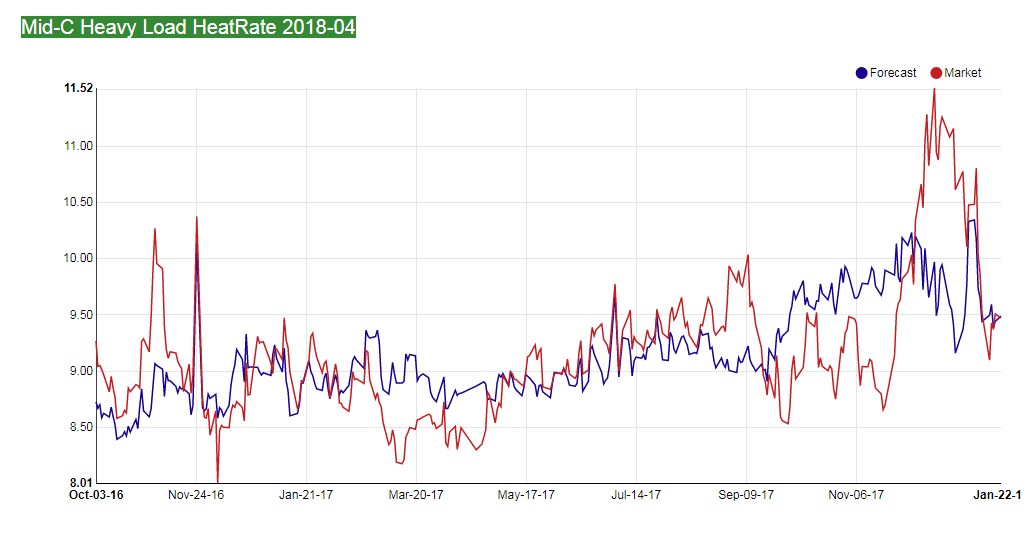 How the mighty have fallen, and so has April. Now she’s priced at value and is more of a buy than a sell. Because — its cheap and we know nothing about when the melt takes place; we do know BPA will draft 33′ in April, but it might be much less than that if they keep pulling Roosevelt down. Plus, if March is cold, and that spills into April, inflows will be off, and the draft will be needed to keep water in the rivers. So, don’t think April is roadkill just yet when it gets cheap we’d own it. 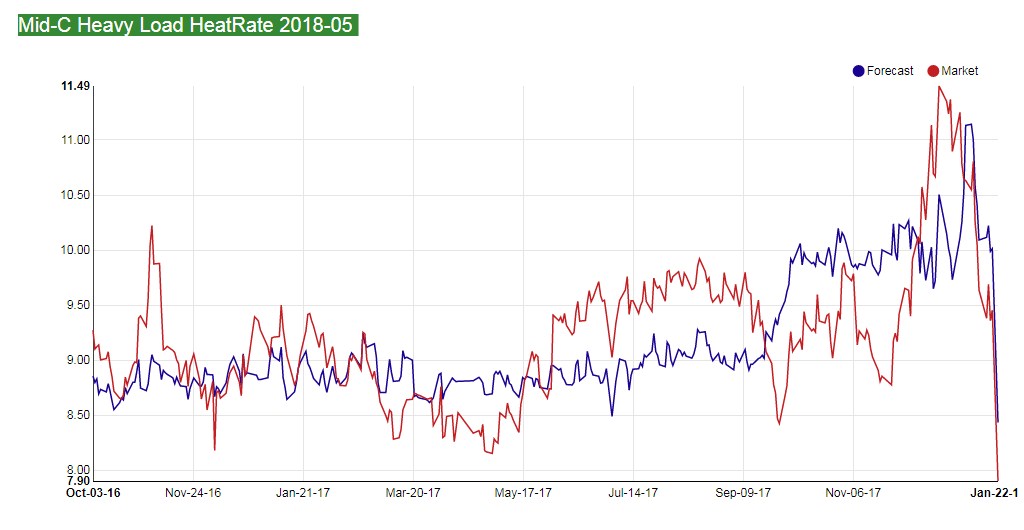 This is cheap, and we’d be backing up the Ryder truck and going long here. This may be a price fluke, like a high gas mark, but if its real you have to own the May today. 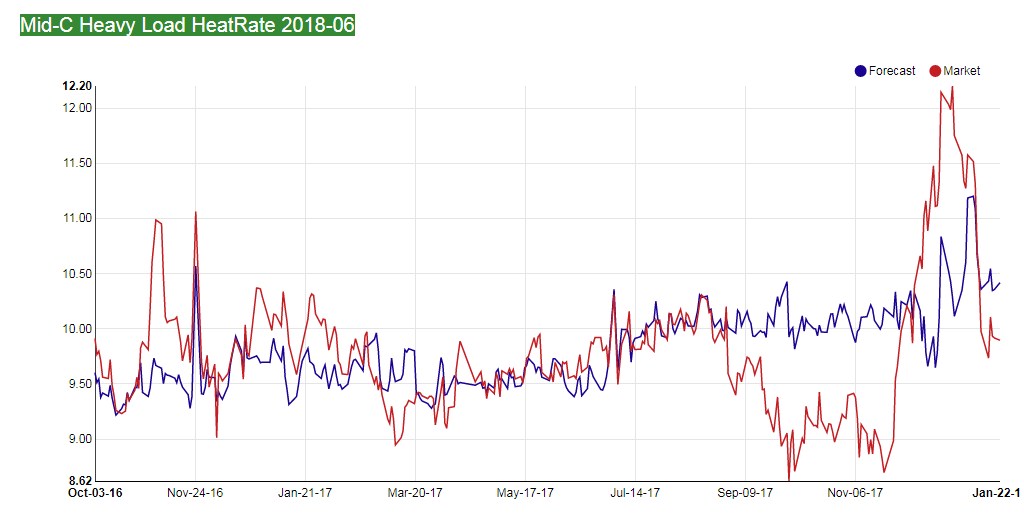 The June got cheap, too; probably off of the recent SWE rallies, but now its maybe a touch on the low side. Between May and June, however, we’d own the May. 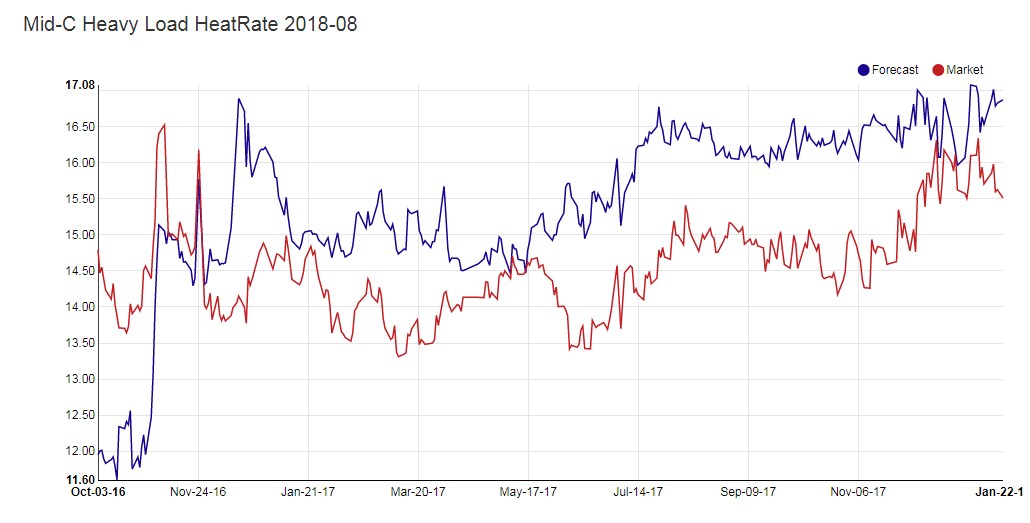 July is maybe the most reasonably priced bullet, and we’d pass on doing anything here. I guess if I were a gen or long-ute, I’d be inclined to sell given that the heat rates are sick high.