After the long weekend, we see some cooling across the WECC and a slightly wetter outlook in California, though the Northwest remains more dry than wet. Perhaps most surprising were the mid-60s in Seattle yesterday, a genuinely bearish load day.

These were prices going out, on Friday. Socal rallied sharply and commanded a premium over PG&E Citygate, why? TWP is flowing into Socal; loads are weak? The March contracts reflect that reality; I guess the longs are just not willing to accept the loss, yet; it is coming. Most hubs in March had a rally of sorts, except for Sumas, it failed to move. Don’t get that either; the widening basis spread between Sumas and anywhere. If you believe the RFC’s STP (why would you?), you’d be loving on the March Sumas long time…

Red is a 20-year average actual energy (computed), the blues are the actual energy for those years (again, computed) and the black is the most recent STP forecast by month. Note the crazy bullish anomaly forecasted for March in last week’s release. We don’t get that either; even Feb is tight. One would have to fade that outlook, it is too tight, in our most humble opinion. But, if you do believe it, you’d think the Sumas March would show some strength, right?

The temperature outlook in the Northwest supports a bullish bent; most days in both Portland and Seattle’s 15-day outlook are below normal — for max; but sadly, that isn’t true on the min. Lower highs, normal lows.

Our friends in California will realize a string of chilly days; in fact, this entire outlook is cold, even Burbank flirts with ten-year lows for Mins. Northern Cal has a similar phenom occurring; like the Northwest, its max is at or below average, yet its min is mostly above normal. Al Gore would call it Global Warming, but then he invented the internet 20 years after its inception, so take that with a grain of salt.

Phoenix gets downright cold, for Phoenix, that is. No green boxes here, even Sun City’s lows are below average. The rest of the WECC interior is either below normal or at average, mins and maxes. Overall, the WECC should realize some load rallies later this week.

Mexican flag with Seattle owning the red (63!) Denver the blue (-3) and everywhere else is green.

All the nukes are running but we are entering the outage season, and lots of coal capacity will be falling off in the Southwest in a few weeks. Meanwhile, it’s quite bearish as reflected in the gas noms: 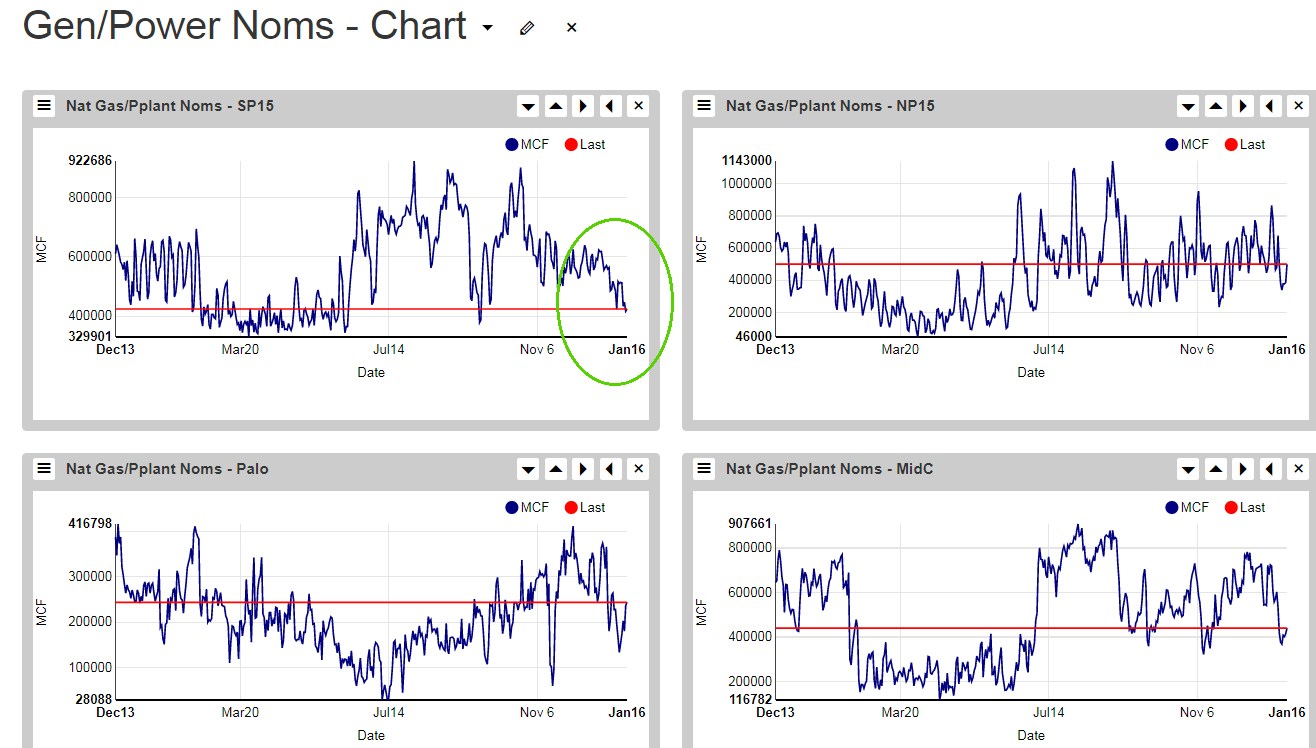 SP’s noms are in a freefall which is somewhat surprising given the collapse in Socal Citygate prices; we’d have thought they could finally afford to burn their own gas, versus importing other’s power, but we were wrong … again.

None of the other hubs are much better, though Palo saw a rally; the Mid-C noms have tanked which may explain the March Sumas reticence. 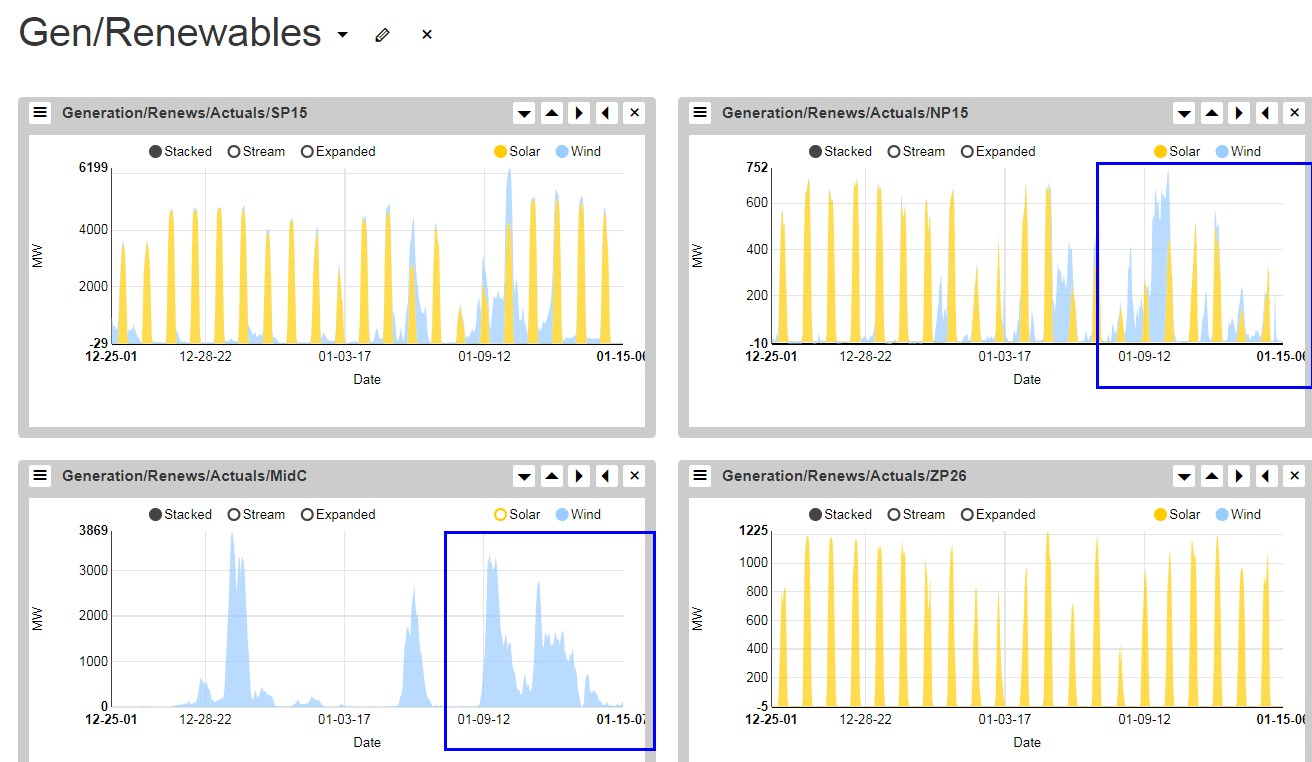 The last few days have resulted in a fair amount of wind for NP and the Mid-C, but not at SP. Not that a dearth of wind matters at that hub, the ISO just backs off solar whenever it blows, which blows. Would be better for volatility if they let cash get crushed. Where’s TURN when you need them. 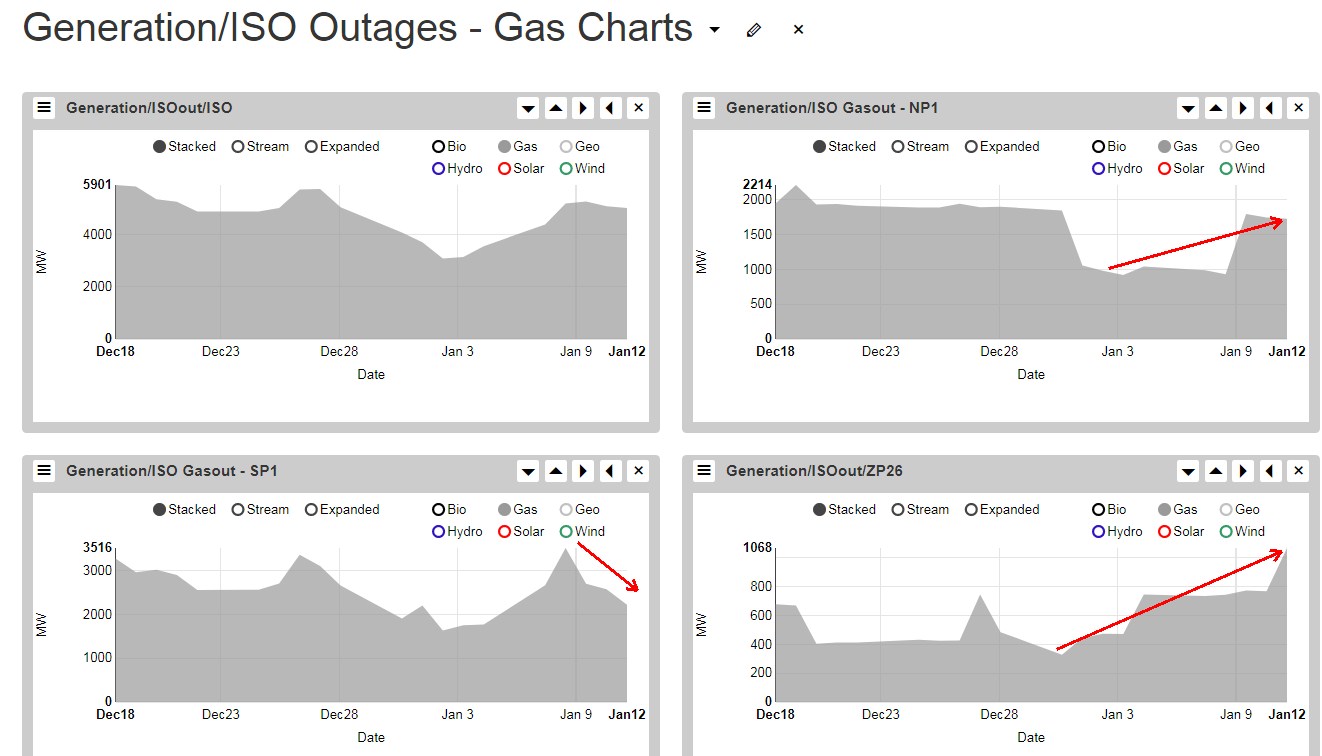 The outage spreads have widened; both NP and ZP saw new gas outages while SP saw a net return of capacity. All of that should change soon; SP starts taking units down, typically hitting its yearly highs in early April.

The Golden State won’t be so golden over the next couple of days; more likely it will be “mud-brown” as a couple of inches is projected to wash more homes into the Pacific. The Sierra’s are expected to finally get a couple of inches, and with cooling weather should make for some excellent skiing at Heavenly, if it opens.

The Northwest isn’t bone dry but is projected to be about 50% of normal over the next ten days. The Flathead basin is exceptionally dry, but we see hints of some storms building in days 11-20. 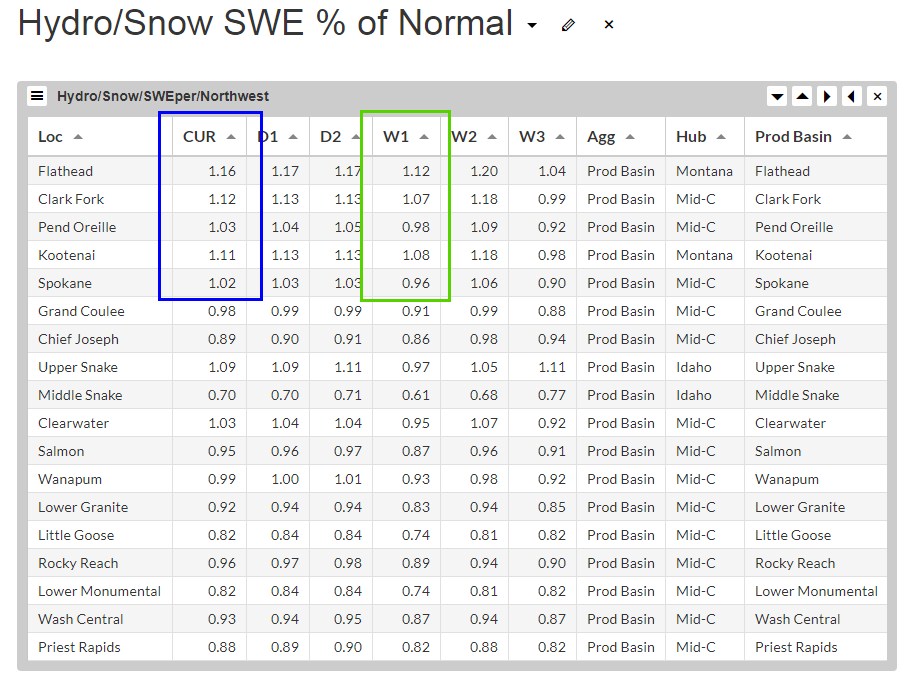 Most of the upper Columbia realized SWE builds, week-on-week. The anomalies are now above average for all stations upstream of Coulee.

We aren’t even close to spill season, but we see spill at a handful of MidC projects; not a lot, but there was zero a week ago.

Discharge at Bonneville is up, everywhere else is mostly sideways.

Coulee average flows are sideways, but its mins are way up; while the reservoir is dropping. Probably not too good for those LL positions, but the impending cooldown will help, and if the market spanked the offpeak it might be a good time to buy some — more on that in the next post.

These California rivers are now mostly all below average, and take note of the complete loss of shaping on the Pit River. The max, by the way, was last year’s  flows. 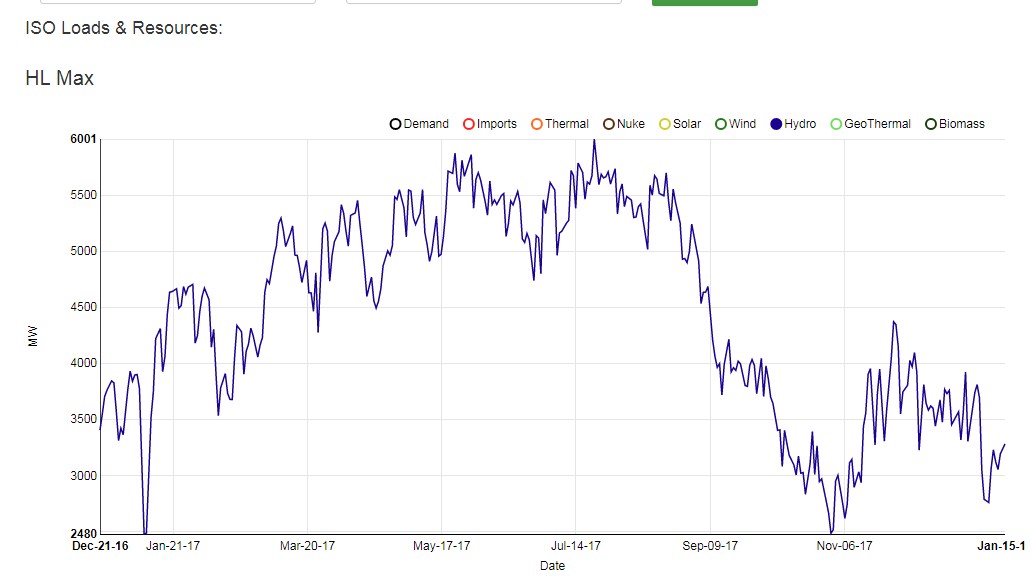 Arrow discharge is robust, probably flood control drafts, but despite that large volume, the flows at the USA border are trending down, which explains why Lake Roosevelt is dropping. Also noted the flows on the Peace are off, probably because of weak BC Hydro loads. Coupled with those cuts on the Peace, the province is a significant importer of energy from the USA:

Most likely these buys (1500 MWs on some hours) reflect weak Northwest prices and, with that cold coming, will look like Bitcoins next week.

Palo flows to the ISO are off, and the Northwest hits any ISO bid north of zero on both the AC and the DC.

A very weak weekend, but cooling weather will tighten up cash later this week. More on that in the next post.