Our fundamental takeaway was of a bullish bent off of cold weather. Let us look to see if Ms. Market has placed any ducks on the pond that we can shoot. 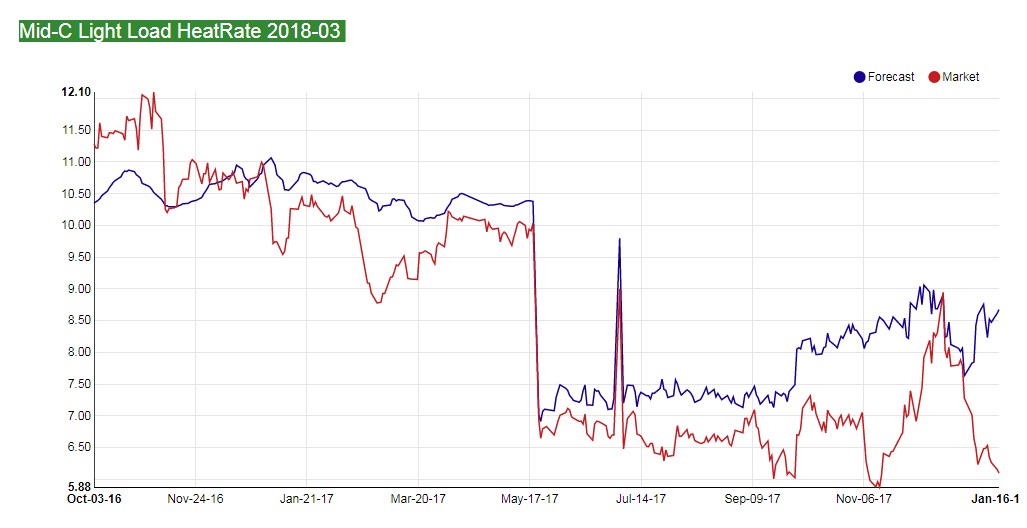 She (Ms. Market) hates the March MidC LL; she must be reading last year’s playbook when the hub realized record inflows driven off of record low-level snow that all melted in a few weeks. We disagree with her read, we love the March given that very little USA flood control will be implemented then, the current precip outlook is dry, and we are heading into some cold weather. Sure, loads have been weak, but that is changing. We like to buy cheap; this is cheap, we are buying. 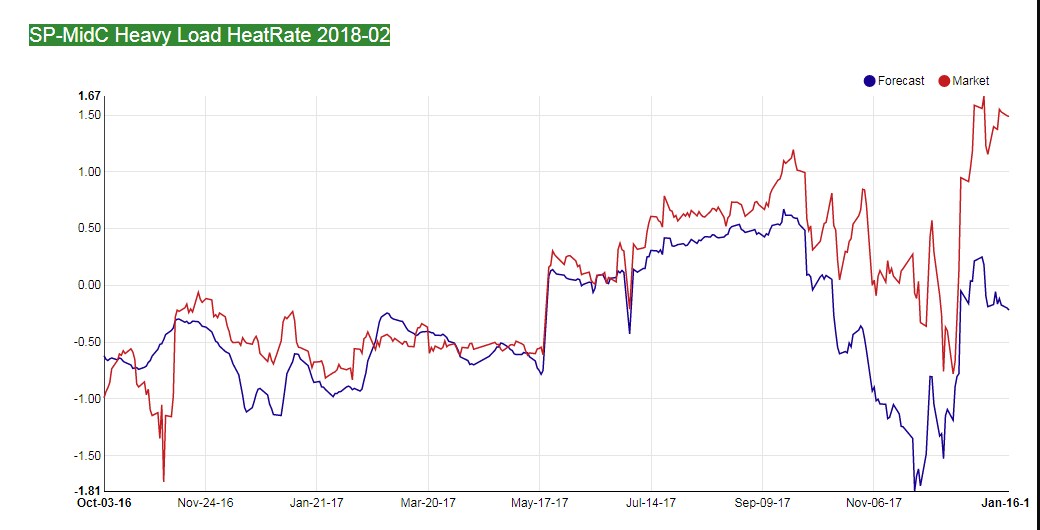 This isn’t cheap, the SP-MidC Feb onpeak; it is now back to a contract high, probably off of that relentless Feb Socal Citygate contract that refuses to accept the reality that  SCG’s gas problems are fixed. Sure, there is some cold weather heading towards LA, but storage is well above last year and that most likely will be the basin’s final winter hurrah. 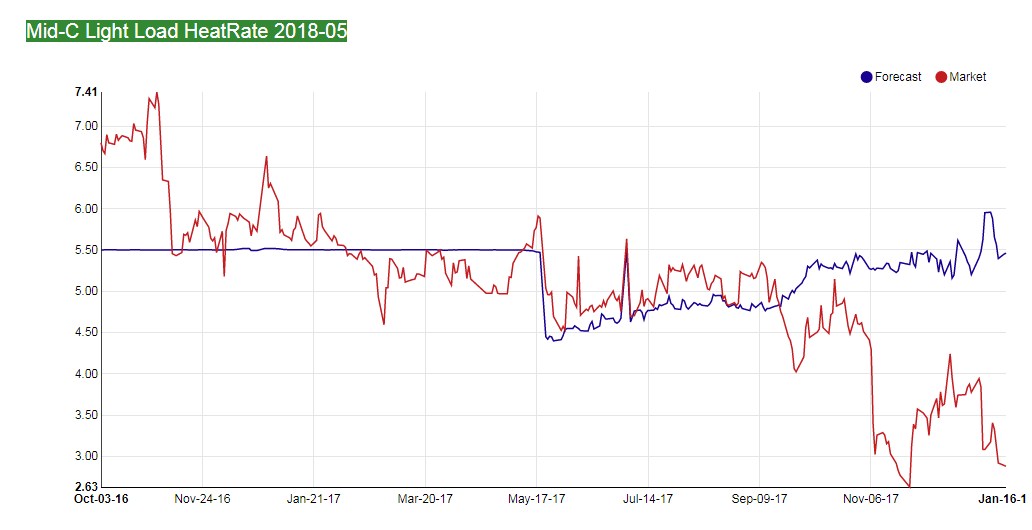 This is cheap, too; the May MidC offpeak, now back to a contract low. But wait, didn’t COE draft Coulee to the 1240s last week? And doesn’t that mean May has refill bullets? Yes and yes; if anything, the COE’s overly aggressive draft is bullish for May, not bearish. 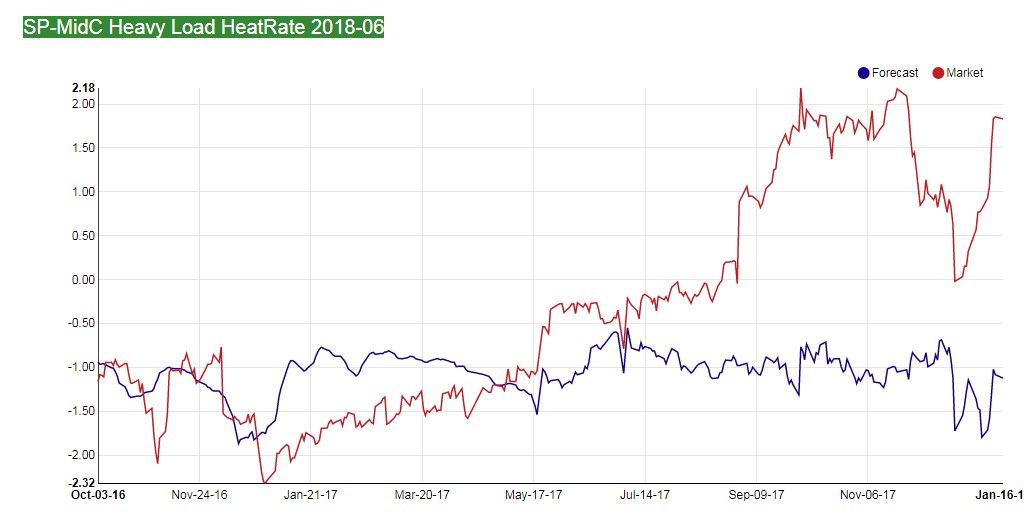 Same is true for June, but now the spread to SP is back to a contract high, and we’d be inclined to short given the SCG gas issues are now relegated to the history books. 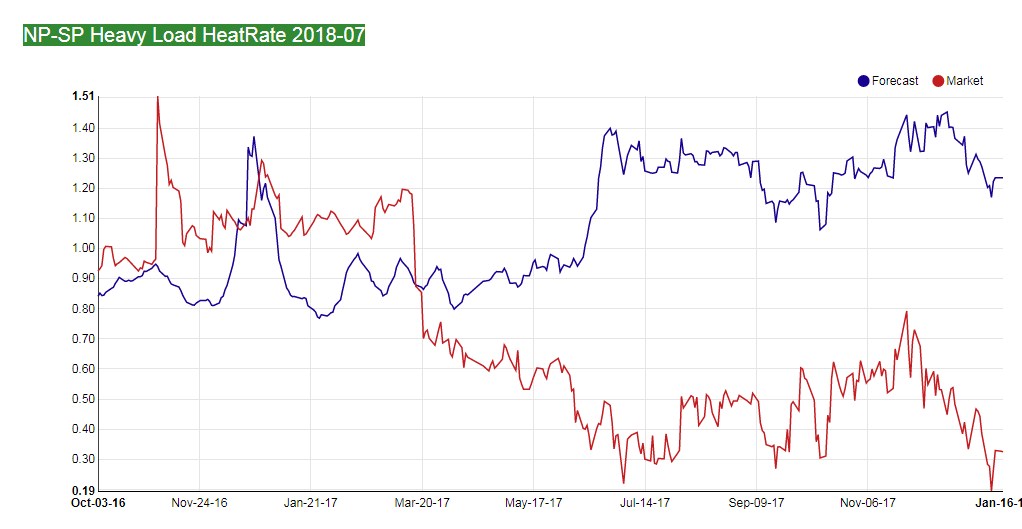 Intra-California spread bounced off of contract lows and remains cheap. If the state were sitting on last year’s water we’d concur; it’s not, the 2018 water year will be one of the lowest on record and NP will be about 1500 aMW shorter this summer than last. 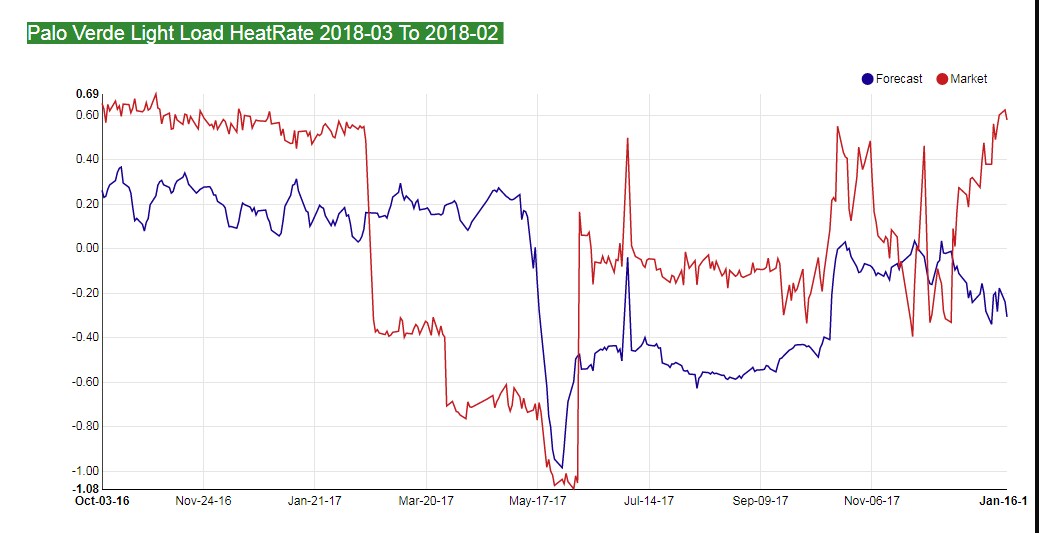 Not saying any of you can execute this, but the mark is at a contract high for the March-Feb PV LL roll. Perhaps this is outage driven, we know loads in March are higher, but Phoenix is about to enjoy its coldest days of the winter, and we’d own the front over the back 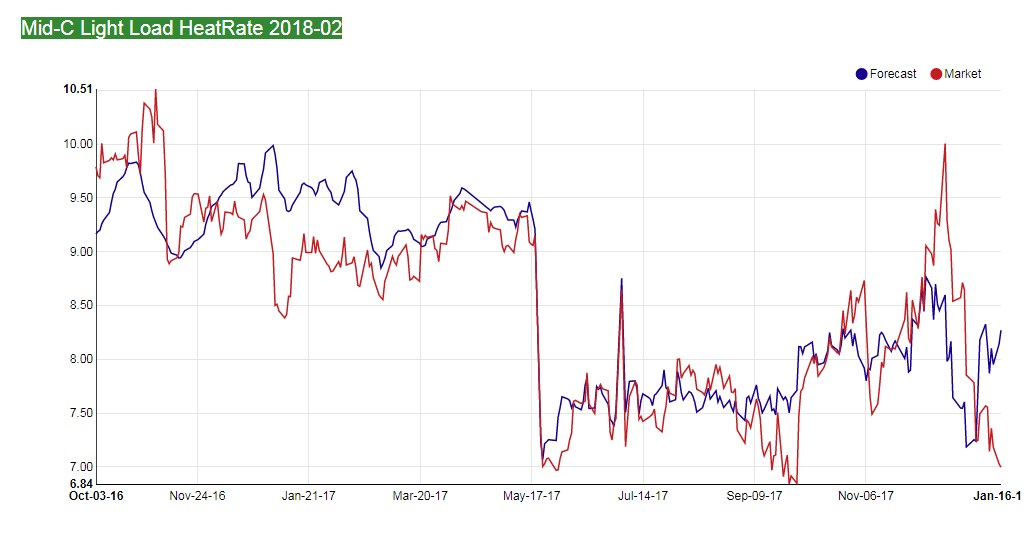 Same sentiment here, in the Mid-C prompt offpeak; it is a contract low in the face of a significant cooldown in the Northwest. We’d own it just as a lotto ticket that the forecast grows even colder.

This is way back in the curve, the Aug-July LL roll at SP15, and the only reason it’s in the post is the super low price.  Now it is a contract low and will rally if SP cash ever gets super-bearish. If I had July SP length, I’d consider rolling it to August at these prices. 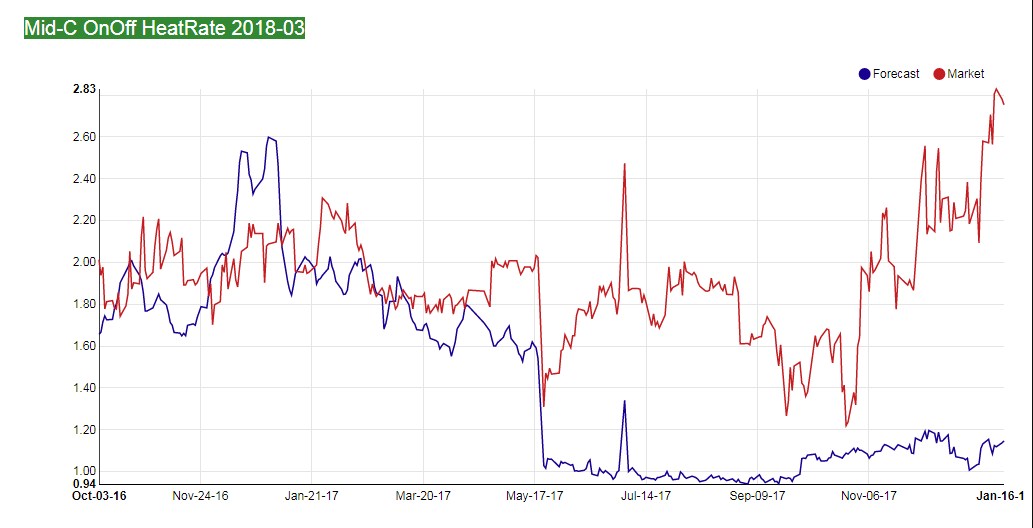 We already studied the March offpeak, here is the On|Off for the same bullet and it’s at a contract high. Typically the hour type spreads blow out on either extremely bullish, or bearish, fundamentals. However, in the Northwest, they have this resource called “hydro,” and it comes with a feature called “shaping”.  Of course, last year that feature was castrated by the tsunami of inflows, but that won’t be occurring this year. Put me down for a chunk of this. 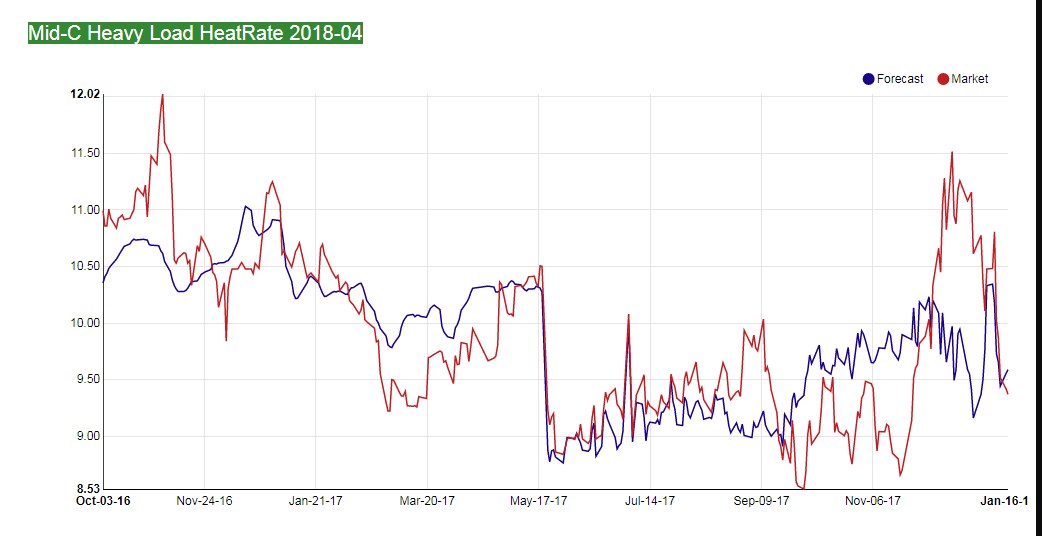 The next batch of trades was culled by sorting the APT on WoW ascending which filters out the “falling stars.” Always fun to look back and see what you should have done or, if you did execute, perhaps it is time to liquidate. In this trade, the April MidC HL, we see what was once gold turned to fools gold. Interestingly, it may be a buy if you fade the Corps April flood control draft. 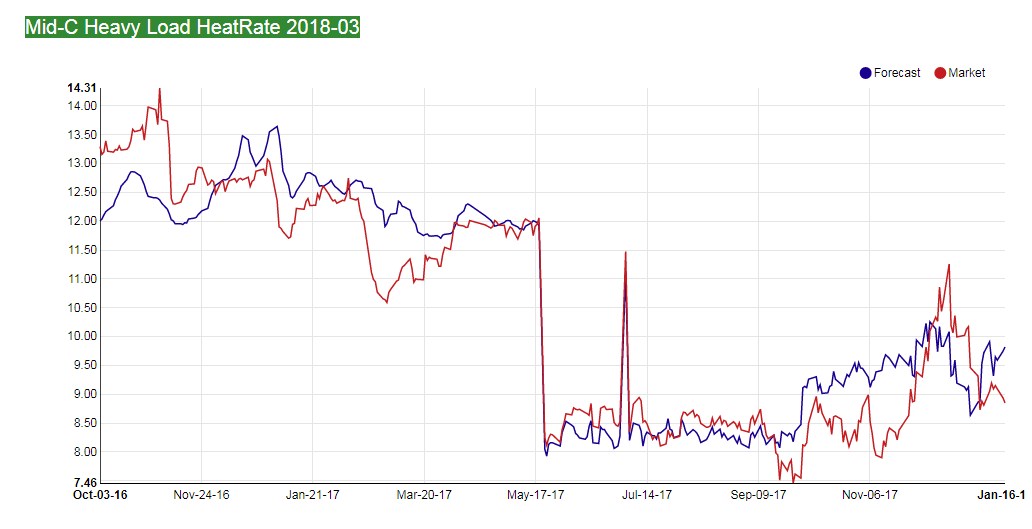 We examined the March On|Off, here is the HL bullet, and it is cheap. Recall last week’s March STP: 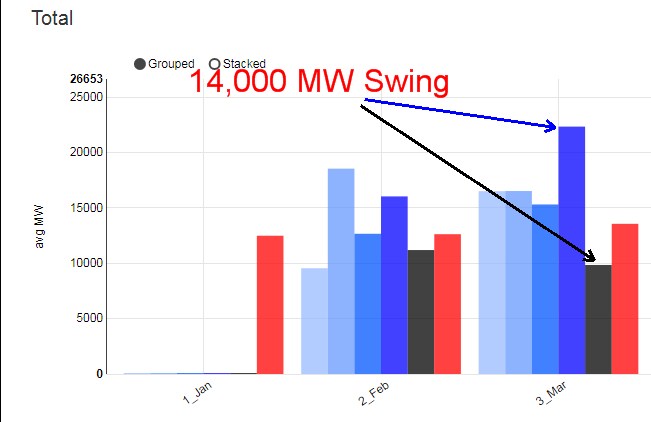 We’ll recall it for you – that is a 14,000 MW swing in last year’s realized energy versus the most recent STP. Unreal. 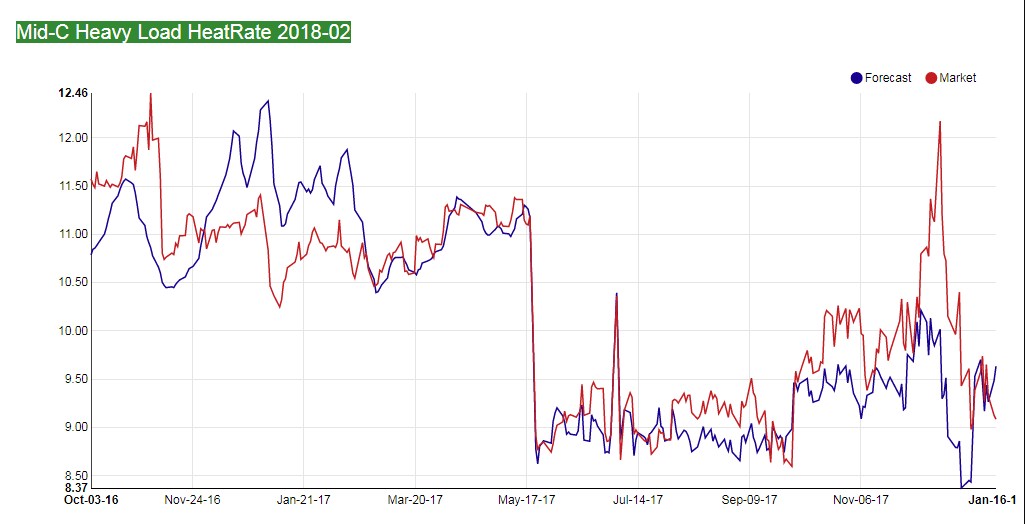 The market loved the Feb MidC for about a day, now it’s reasonably priced, except it is growing cold and we’d buy in front of that cold. 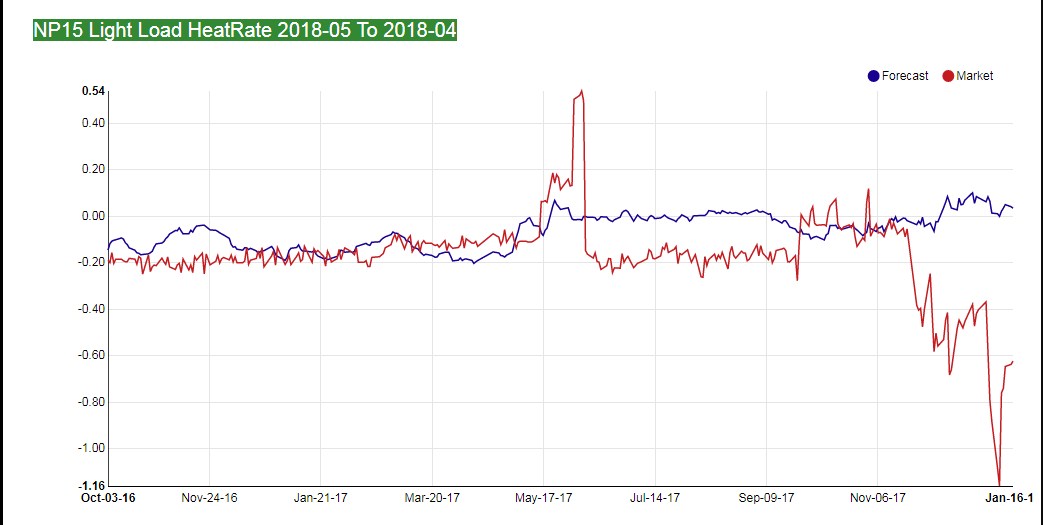 You had to be deft of finger to catch the bottom of the NP May-April roll; how stupid, you could have owned the May cheaper than the April, yet it is still cheap in a dry year like 2018. 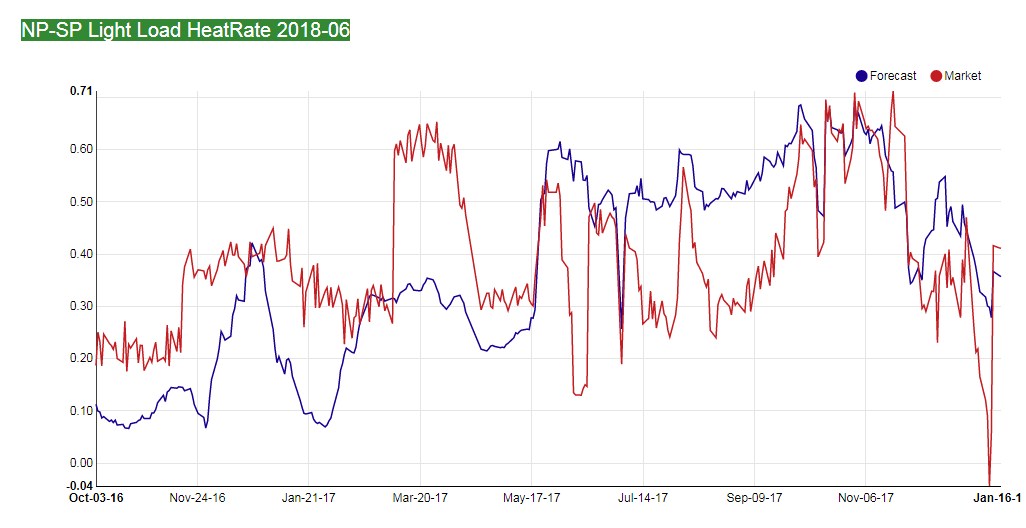 Same fast fingers picked up some easy MTM, now turn it to cash as it is reasonably priced.

The July was rich; now it is just expensive.