We check out the back of the curve (Qs) on Thursday using our “APT” tool. Over the next couple of weeks we will be switching out our historical forecasts, we have a new set run off a new Production Cost Model that we’ve developed. We plan to extend APT out four years, now just two; that will allow us to pick up the cals. More on that later. 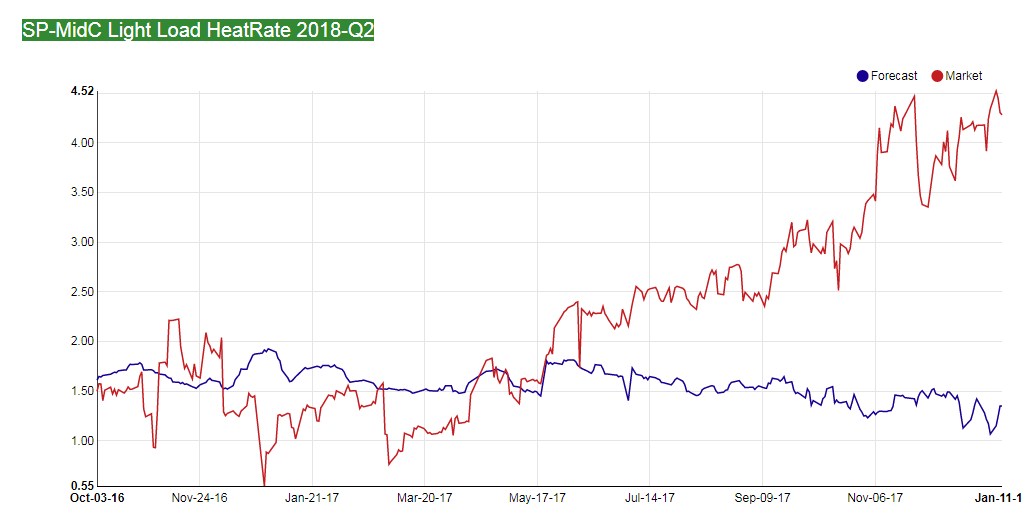 This first group was gleaned by sorting on Rank Ascending; this one, the SP-MidC Q2 LL,  is one of the highest ranked trades. The market is bidding up the SP and ignoring the MidC. From a purely hydro perspective, this is the correct strategy, but when is enough “enough”? We fear April, that month is set to absorb all of the Coulee drafts, but a string of dry days could cut that draft to 1260. We also take note of the weakness in Socal gas markets which might trigger an overall selloff in all things SP. These are very high levels, and we’d be comfortable shorting here. 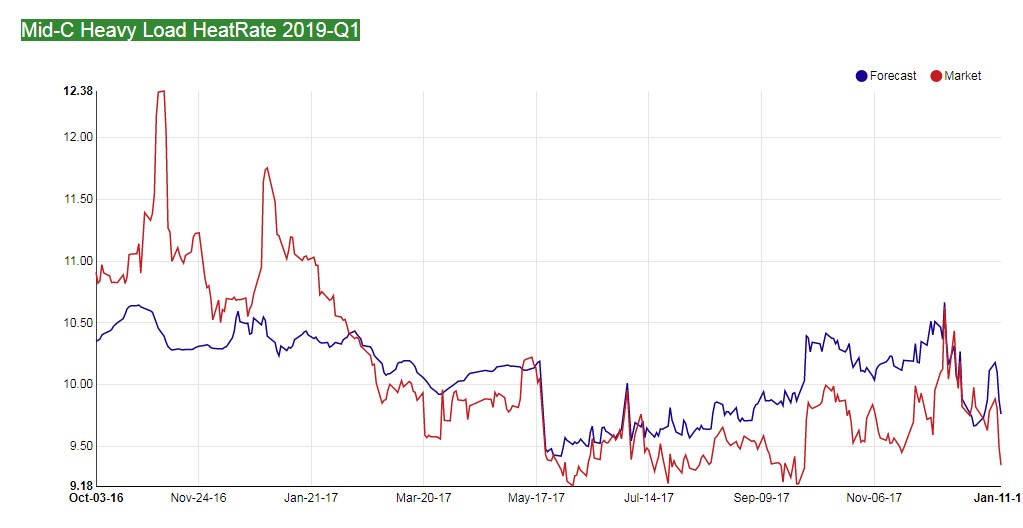 Over the last couple of days the market has pounded the Q1 down, and we’re not sure why aside from very weak cash. If it touches the contract low, we’d buy. 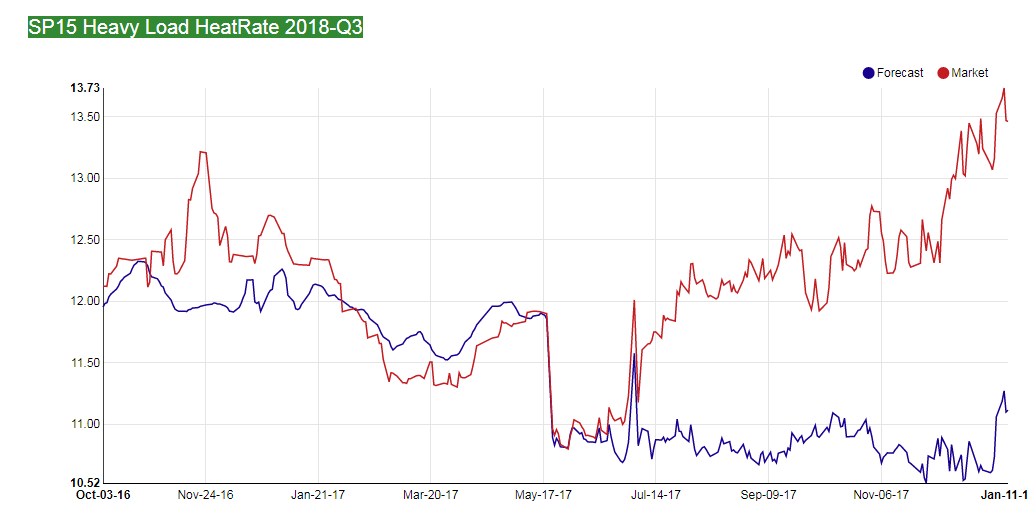 Another case of a very bullish market at SP. The state’s hydro outlook supports this, but nothing else. Watch cash, if SP craters all these super-rich bullets will follow. 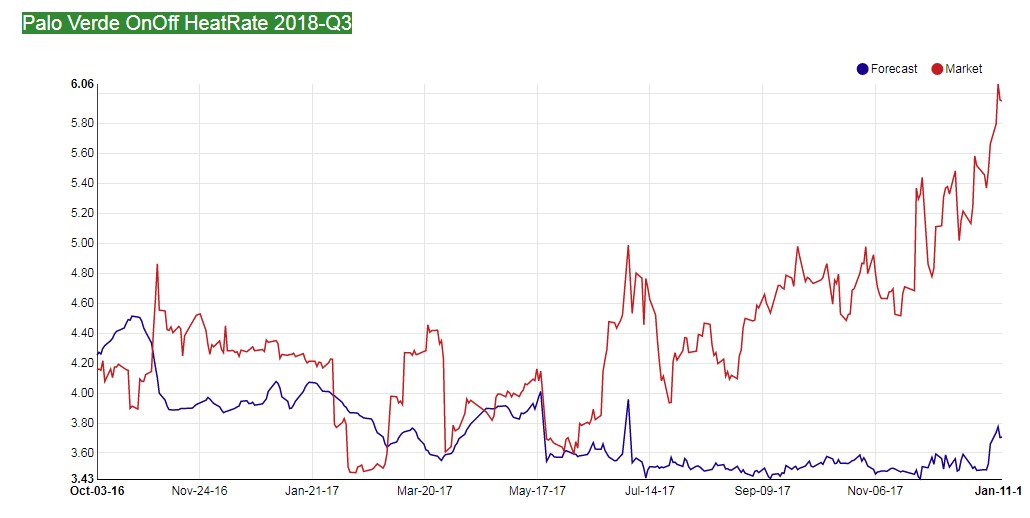 I guess if you buy into global warming you’d expect Phoenix to average 120 degrees next summer; only at those temperatures could the current market price be justified. We’d suggest these lofty heat rates reflect a temporary disconnect between gas and power. Gas tumbled, but the longs refused to sell down their fixed price power and voila, heat rates soared. Short at your peril, we would. 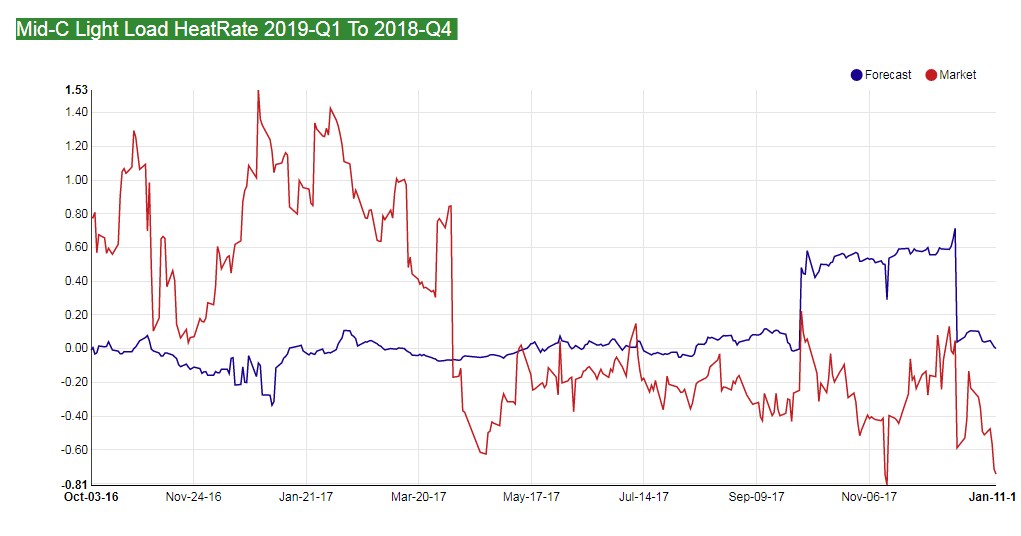 For whatever reason, the market hates the MidC Q1 LL, relative to the Q4. But wait, didn’t BPA just tag another five days of the DC outage onto Q4? If anything, this should have spiked off of that news. 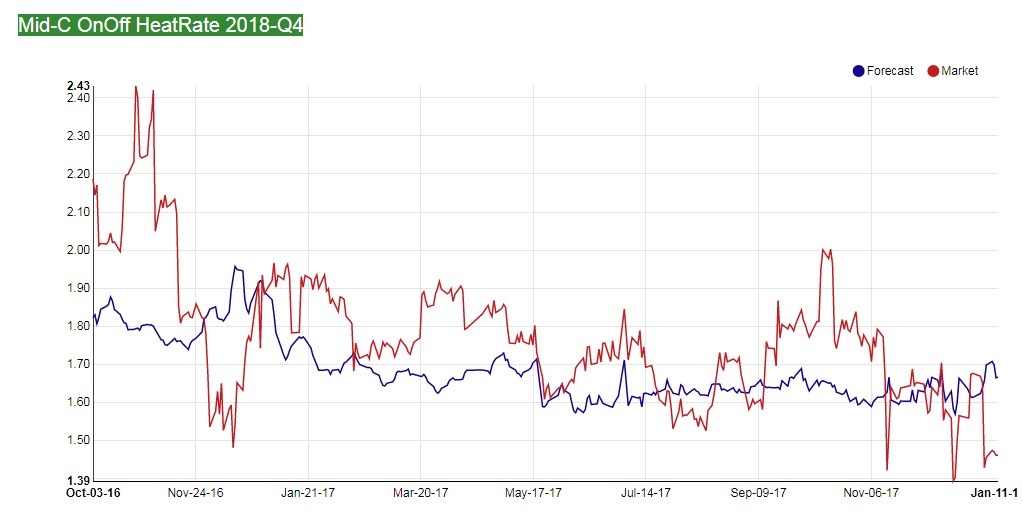 In the Q4, the market either loves the LL or hates the HL, but now this is back to contract lows. Most likely, after the extended DC maintenance, the market forgot to price the LL and remembered to mark down the HL. We’d buy this all day long. 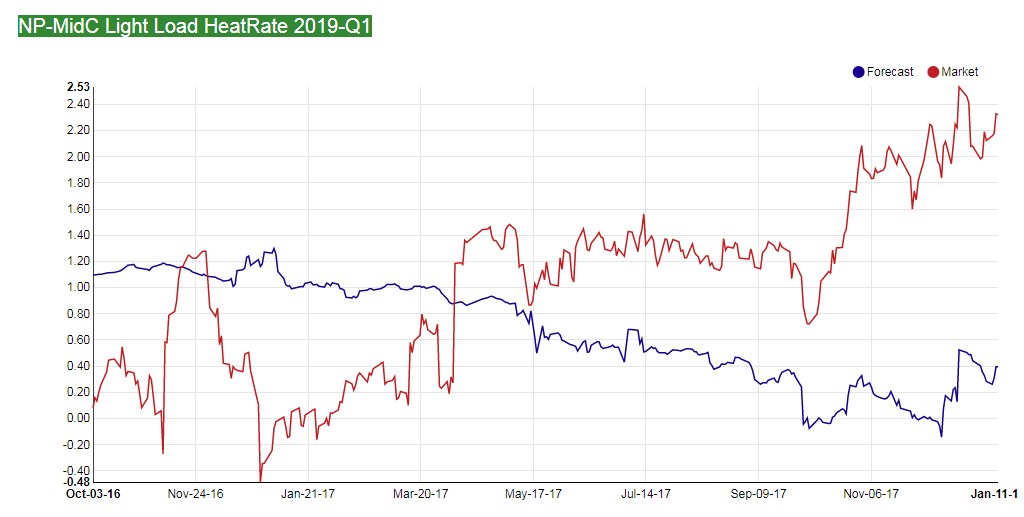 More richness in a strip that is over a year from delivery. This is a play off of the next 90 days cash; if the ISO stumbles, all these spreads will collapse. 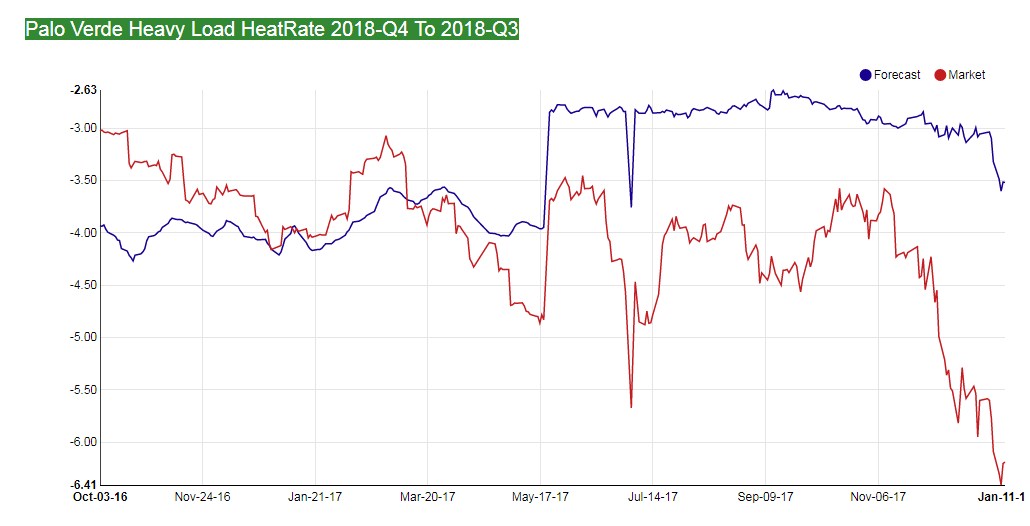 We already looked at the Q3 PV, here is the same story, except as a roll to Q4. This is far below a contract low and seems interesting from the buy side, at least we think so. Of course, you’d be short a Q3 call, not a fun thing to own. 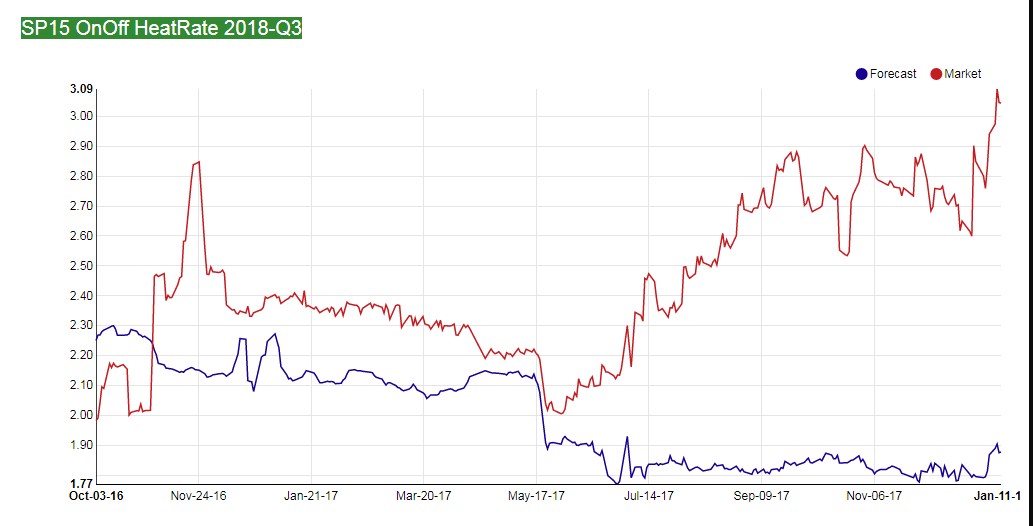 A new high for the Q3 SP On|Off and we’re not sure what is driving this; probably a disconnect in the gas to power marks. 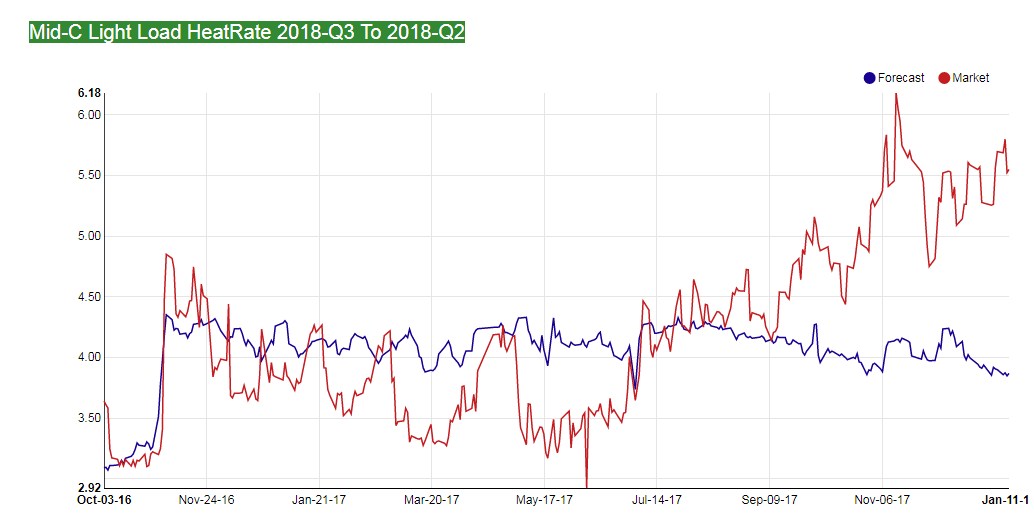 The 3 to 2 LL roll at MidC remains rich; in a wet year it should trade high, but is this year really that wet? 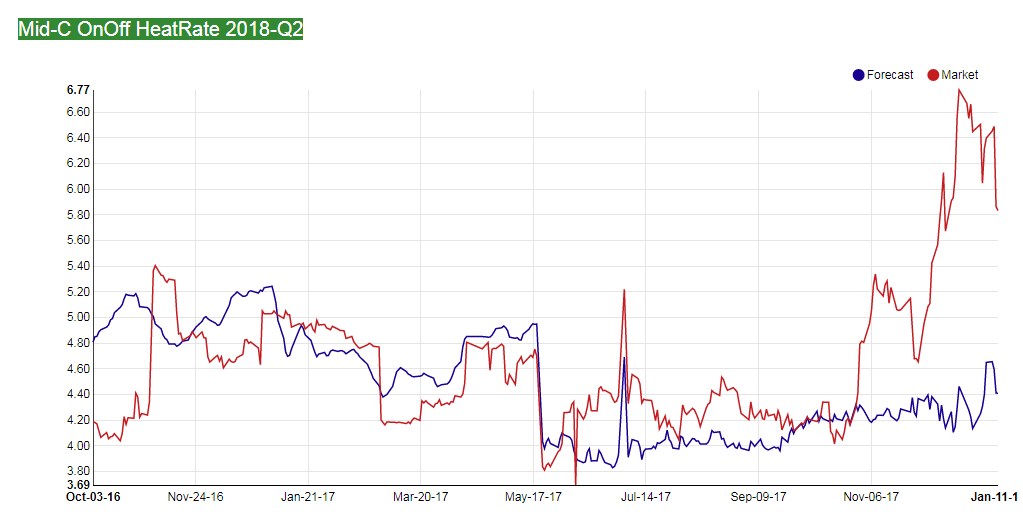 We wrote about this, the Q218 MidC On|Off. It set a high and has corrected, but is still too rich.