This will be our last post tagged with a 2017 date. It was a good year and Ansergy thanks  its clients for their support. We are excited about the coming one; several new products are in the process of being rolled out. Perhaps our most significant undertaking is a new service, a 25-year forecast. More on that in the new year, for now, our focus is on the current market, and we see two critical developments.

First, the Needles disaster is over; gas is flowing on the Transwestern Pipeline:

Capacity is around 800 MMCF, two days ago the pipe carried 250 MMCF into LA. Socal Gas supply issues are over, the term markets seem to concur: 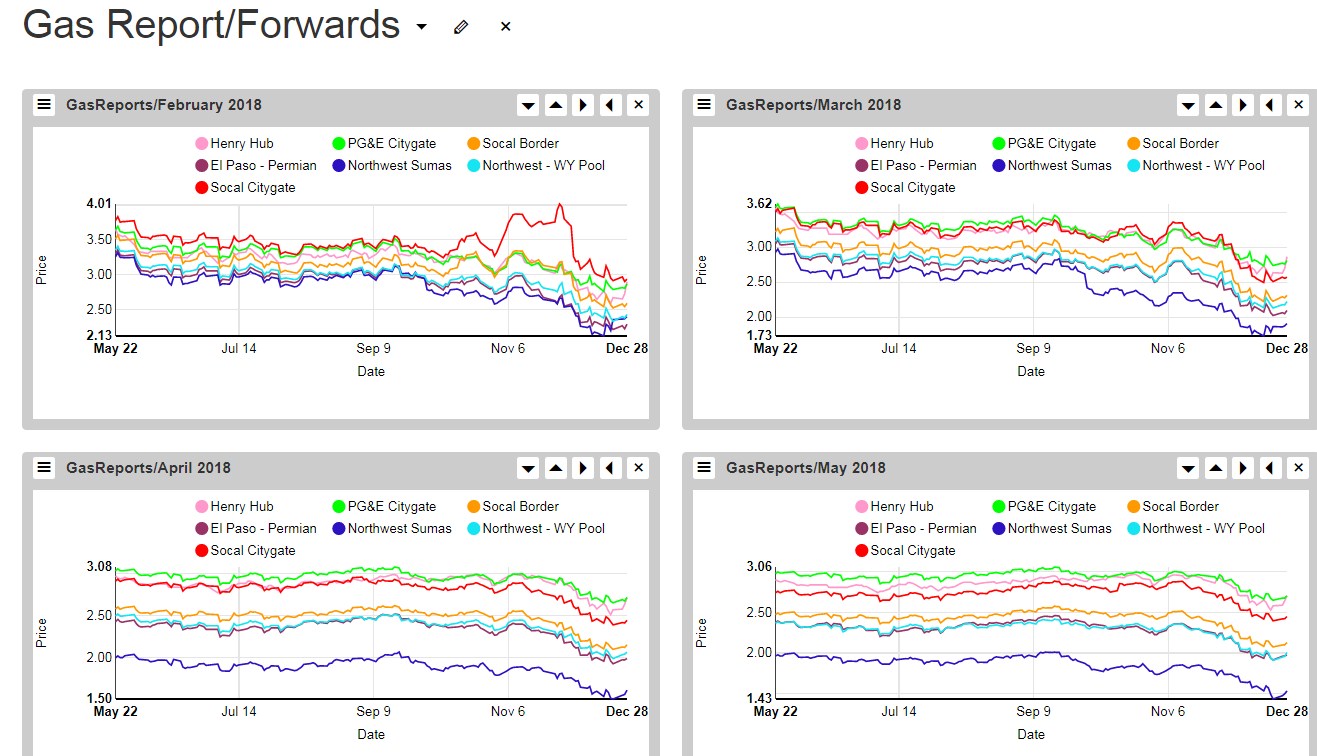 The Feb contracts for PG&E and SCC traded at parity yesterday; the Mar and out has Socal Citygate lagging PG&E.

Dry weather is the other piece of news which we feel is relevant. The Northwest appears to be heading into a significant drought which is occurring during the height of the build season:

The paucity of wet days in the Mid-C interior  is remarkable and bullish, though none of that is showing up in the NWRFC’s water supply outlook:

But it is in Ansergy’s; our TDA Jan-July has collapsed, again, because of that string of dry days. The first flood control draft will come out in the second week of January. A safe bet is a slightly below average outlook, though the dry should pull that down to possibly mid-90s. 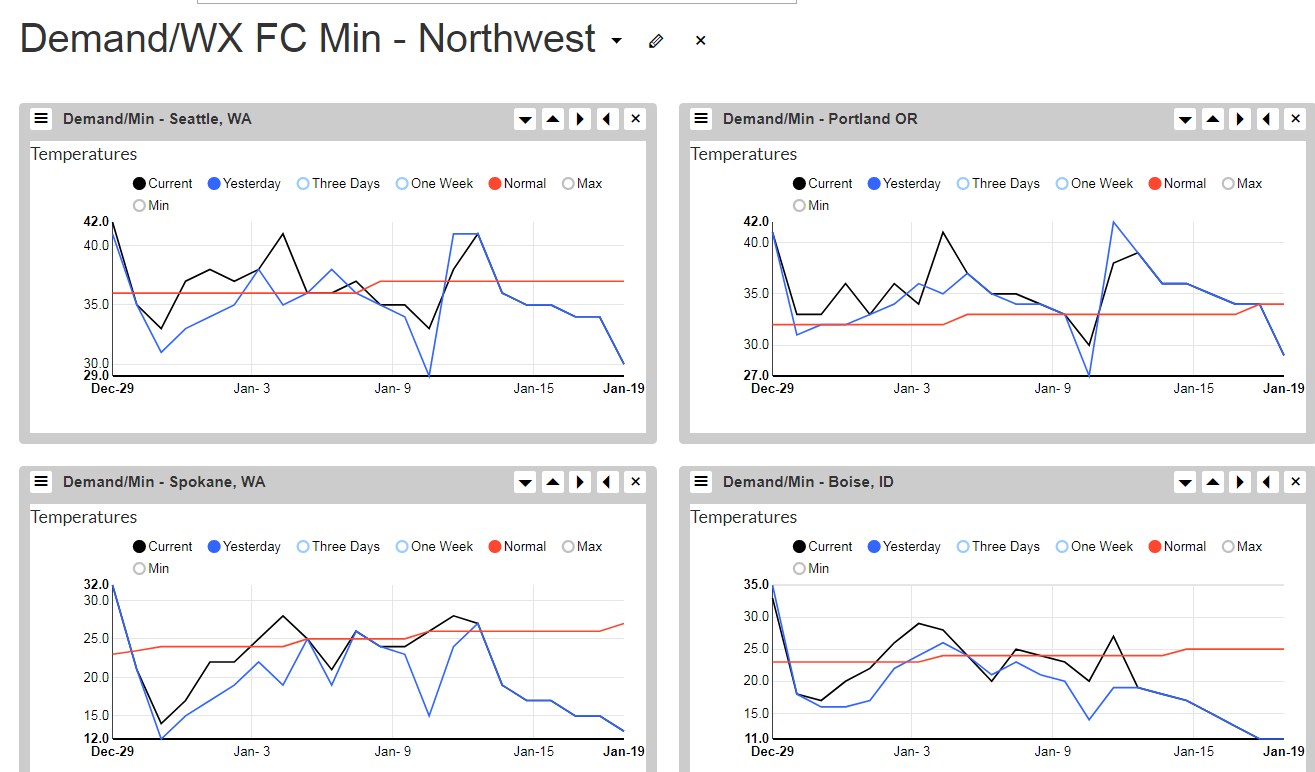 Portland is above average more days than it is below; Seattle shows a hint of cold in the back of the 11-20 day; the MidC interior is just cold. This is not a bearish forecast nor is it irrationally bullish, either.

LA is poised to drop back to normals for the lows, we can expect gas demand to soar, but with the return of the Transwestern line, shouldn’t make a significant impact on the spot gas prices. San Jose has a string of days below normal (Mins) and will keep upward pressure on NP prices.

Even Phoenix cools down; now its lows are in the mid-40s; PacEast will see strong loads in the new year as the cold settles across the WECC interior.

Realized temperatures are much warmer than a week ago; Portland is up ten degrees, Burbank bakes in the low 80s. The outlook, to recap, is for colder weather, perhaps the coldest of 2018, but not bitter cold. 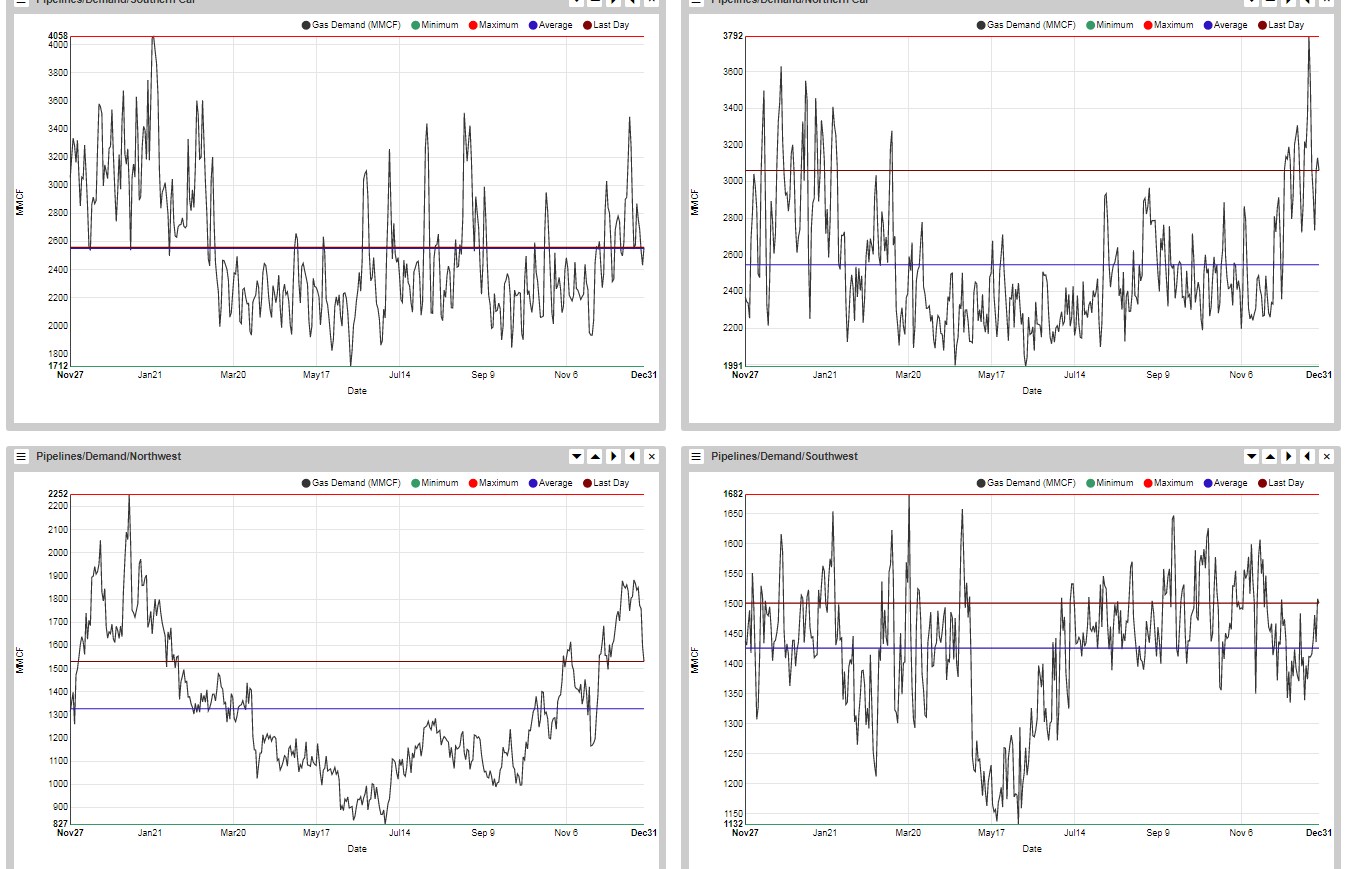 These are plots of gas demand by region; most are off reflecting those warmer days. 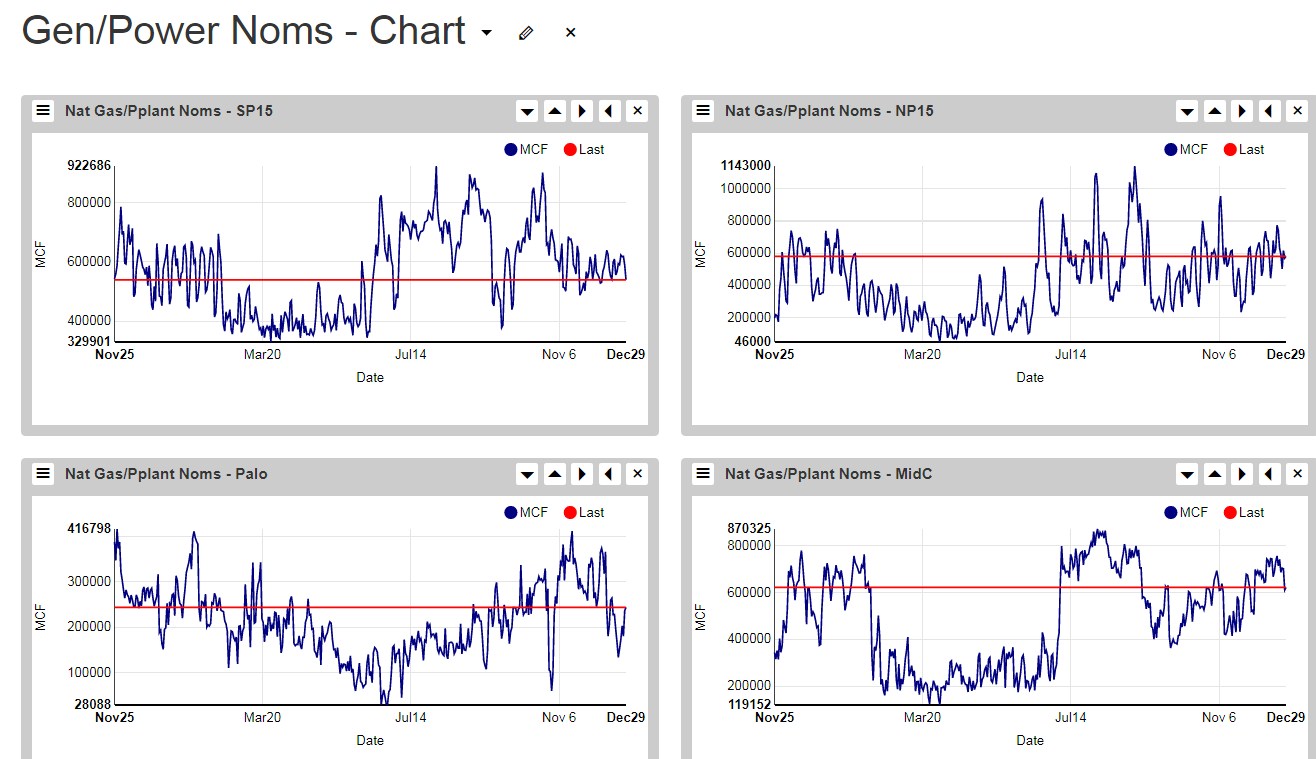 MidC noms are off a bit, Palo’s rallied, while the ISO’s are sideways. 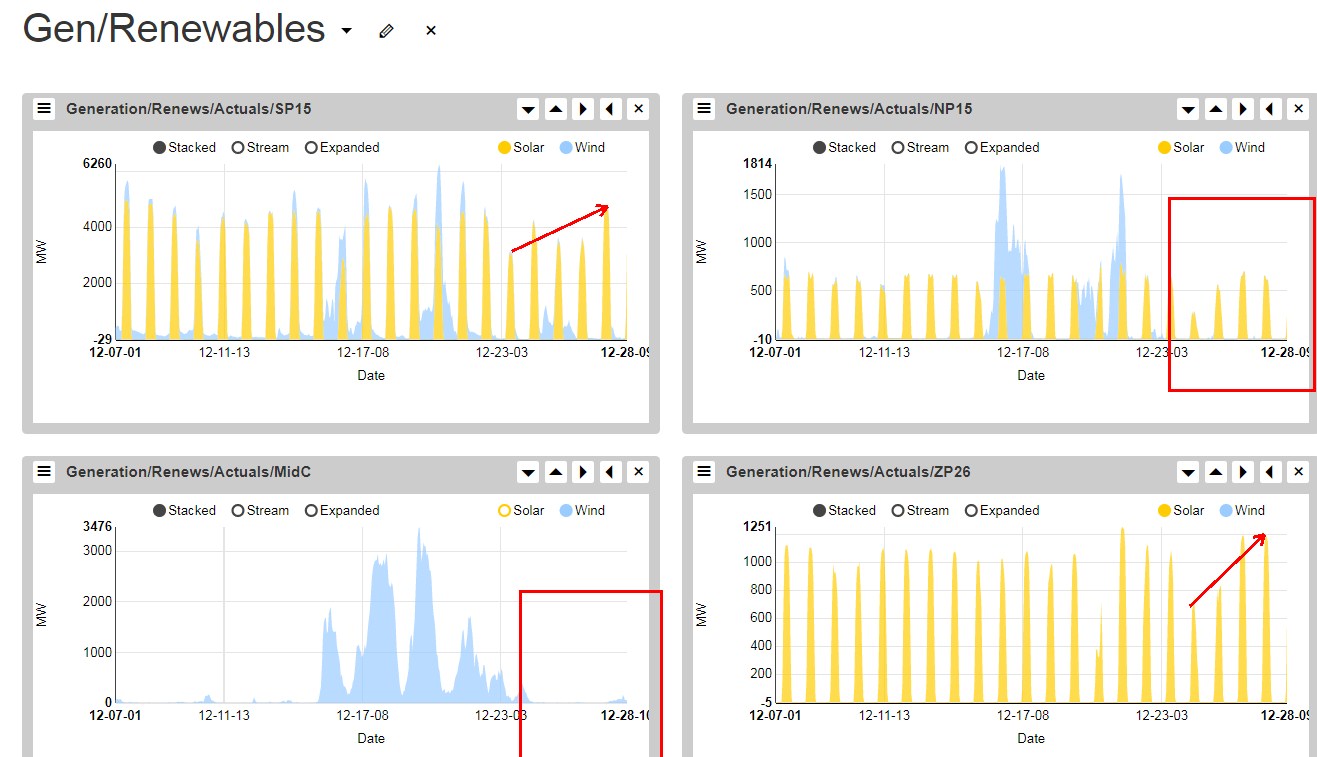 The wind went AWOL the last couple of days while ISO solar rallied. 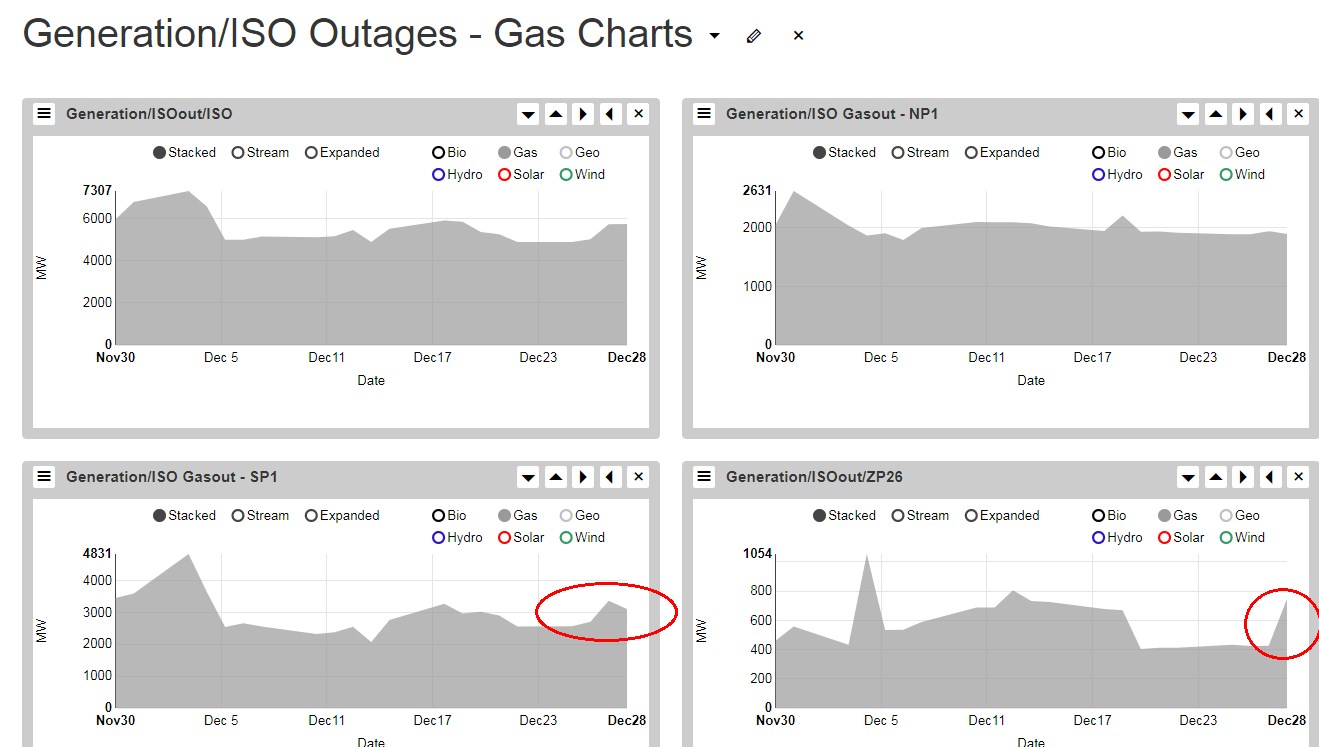 Gas outages are up in both SP and ZP. Let’s take a deeper dive:

We were struck by the recent Planned Outages; Ormond, Blythe, and La Paloma are all new planned outages. Isn’t this the height of winter? Speaks to how little cold weather impacts SP15, at least relative to the Northwest.

Let’s revisit the STP forecast for a moment:

We think the April is off the charts too high. The RFC has dropped 2400 aMW of new energy into that month over the last three weeks:

I suspect they are looking only at current SWE anomalies but we’d caution against ignoring this impending dry spell. For reference purposes, here is the Ansergy flow forecast at TDA versus the STP:

Our independent forecast tracks the STP until April; then the two are materially different. 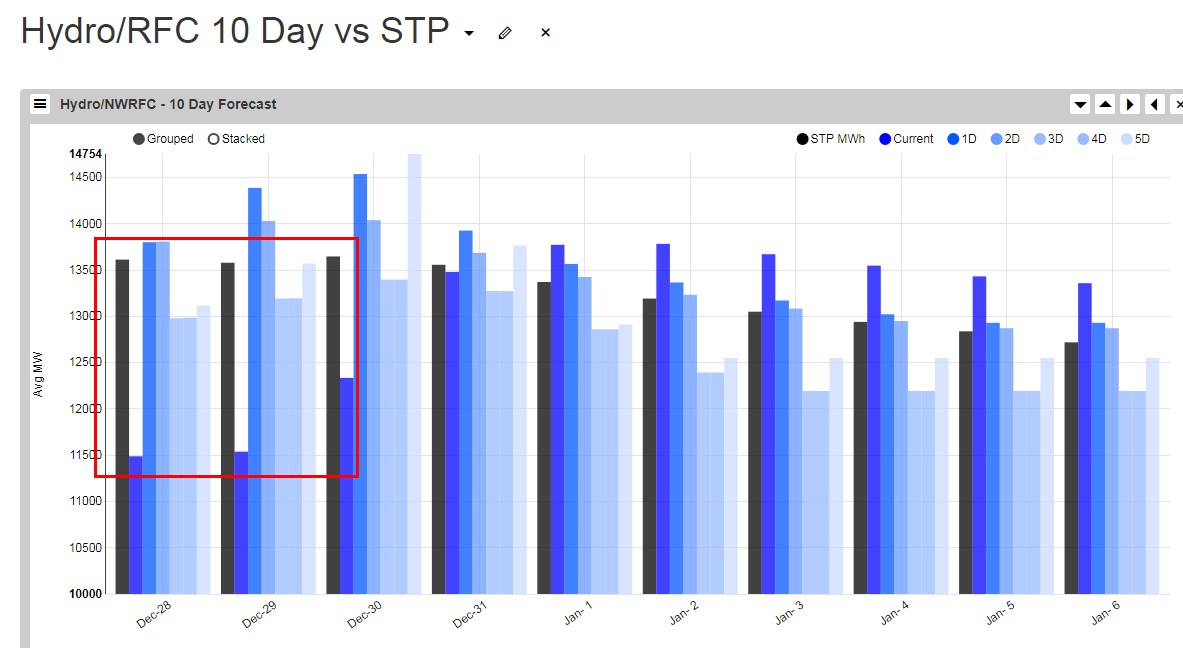 Cuts in the RFC’s 10 Day outlook as compared to its STP. We suggest these reductions are driven by warm weather and the holiday weekend; in other words, 100% regulated.

Coulee discharge is very stable; all the Corps projects are aggressively shaping water:

BC continues to sell to the MidC; the DC is mostly full, though the AC is not, it didn’t hit TTC once in the last few days. Path 15’s derate is over; the line now is fully rated; flows to SP on Path 26 have rallied a bit, and Palo exports to SP15 are up.

The outlook is more bullish than bearish because of cold and dry weather next week. Nothing warrants those fateful three letters, “OMG,” but heading into a three day weekend we wouldn’t want to be short. More on markets in a post to follow.