Santa came, presents litter the house, many never to be played with again, yet the power markets persist and hold the key to paying for Claus’s largesse. Probably not off this week’s forecasts, though; there isn’t a lot in today’s fundamentals for either a bear’s teeth or bull’s horns.

Maybe the most significant change from last week is the semi-return of the Transwestern Pipeline intertie into Socal Gas. We say semi because it is flowing but 70 MMCF when its capacity is 10x that. Just the fact it is flowing anything is news; the repairs have been made, now the testing begins, and soon the LDC will be awash with gas and those anomalous Socal Citygate premiums, which wreaked so much havoc on term heat rates, will be relegated to the history books and serve as a warning as to how vulnerable the California energy markets truly are. 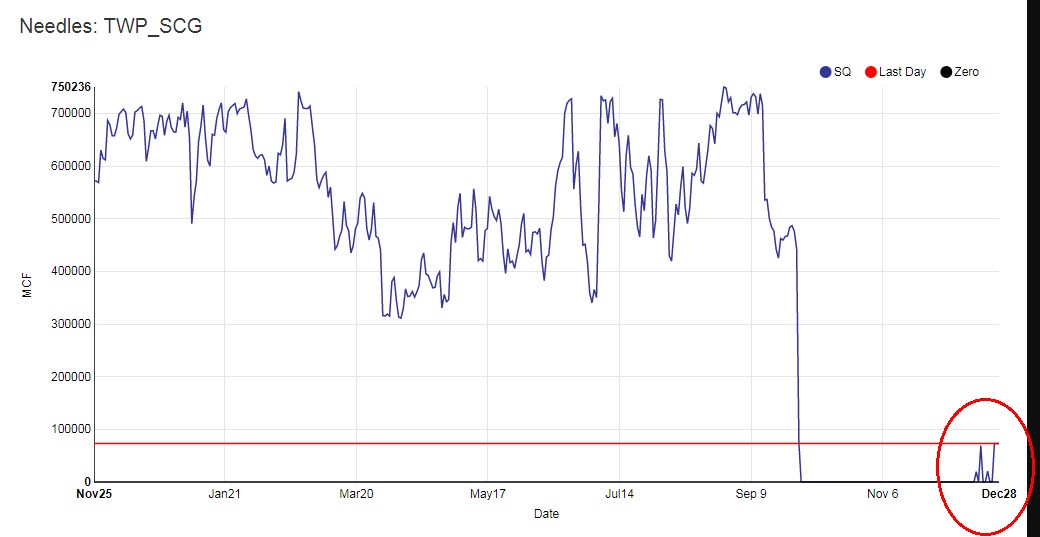 When will the line be fully loaded? If you believe the forward markets, you’d be betting on March or April:

Socal Citygate premiums persist even in the Feb contracts, but in the months that follow they’re gone:

Watch those Needle flows, we think they spike back to 500 MMCF over the next week; then the Feb will flip. Why then? LA grows cold, that’s why.

Not record-setting cold, but back to the ten-year averages across the state. Core gas demand will soar off of current levels:

The above plots are derived from aggregating all of the LDC nodes and act as an index of daily gas demand. Note the PG&E demand spike from a few days back.

The non-California indexes are less volatile, but cold weather persists, and these will drift up: 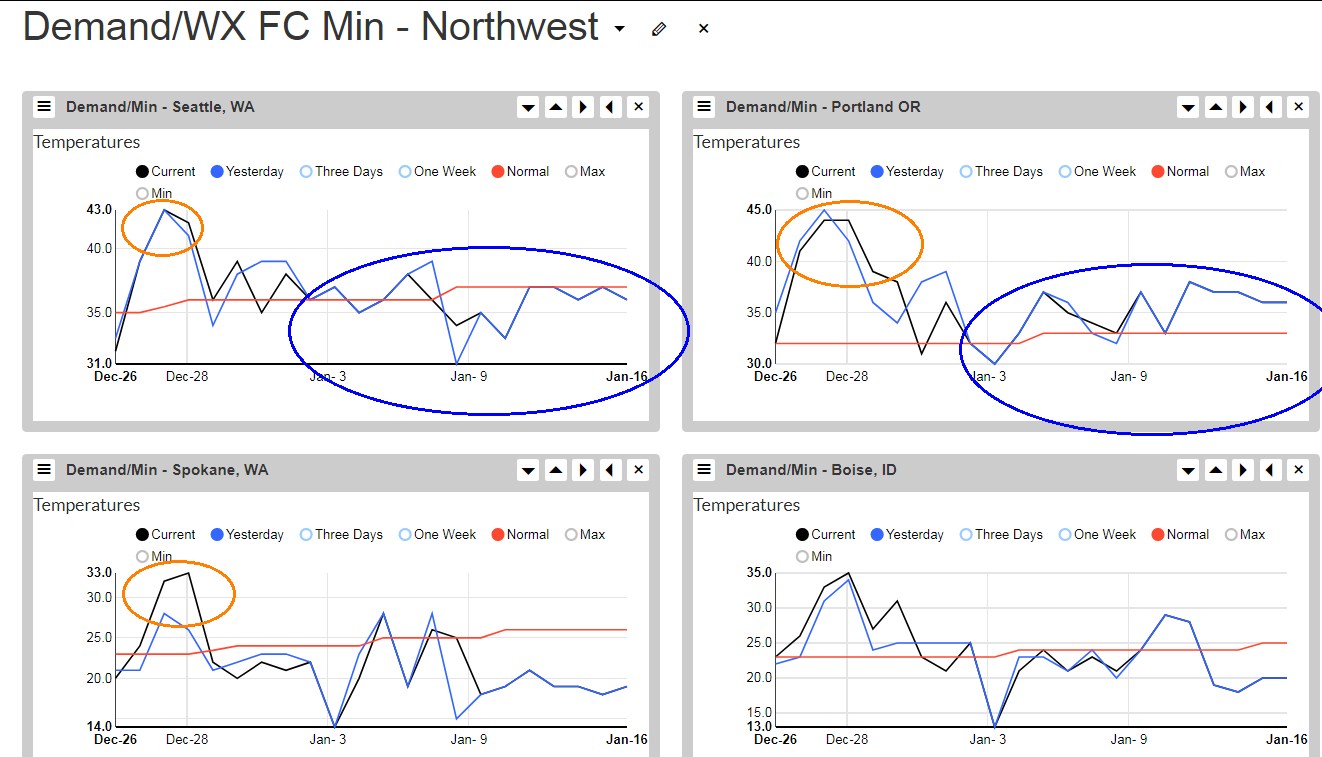 But first, the Northwest must work through some warmish weather this week; then the outlook is normal to slightly below.

The WECC interior also has a cold outlook in its 10 to 20 day. 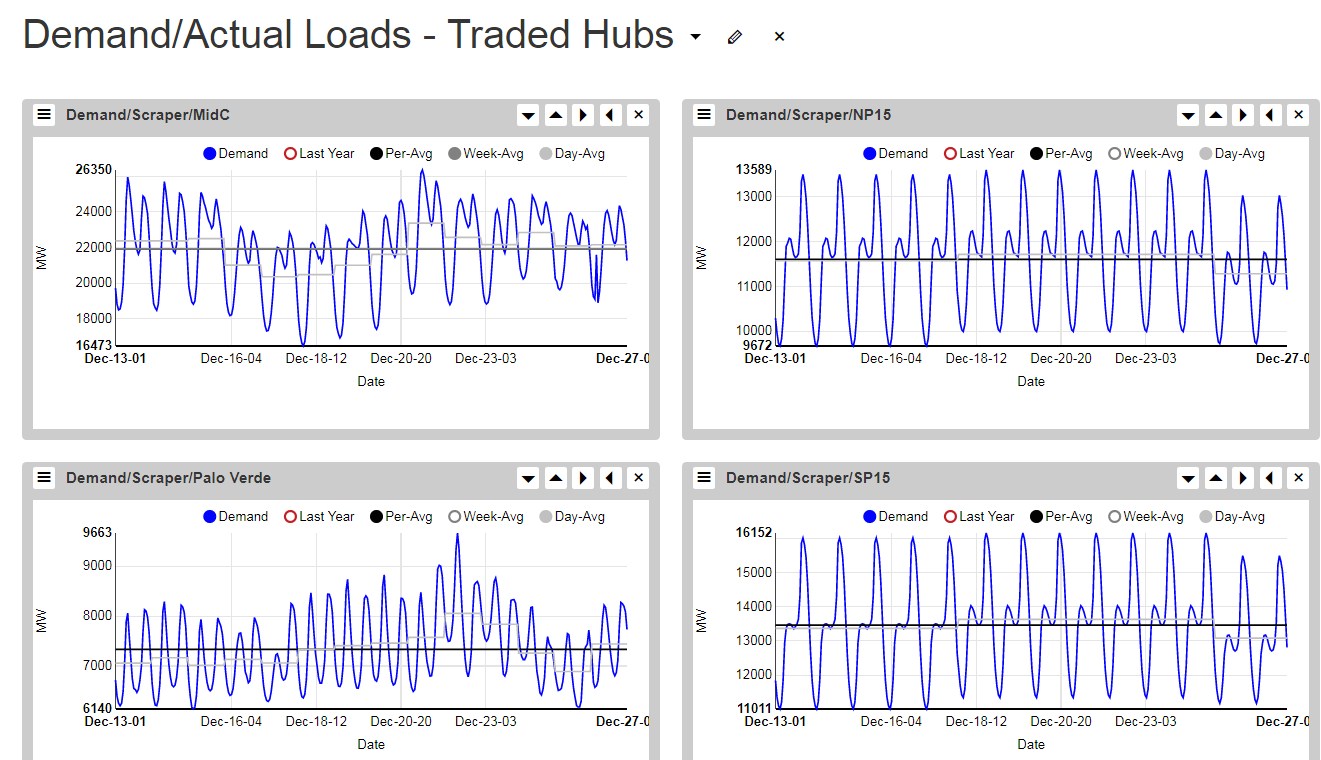 A remarkable set of plots because they are so uninteresting; maybe because realized temperatures are not at extremes:

Burbank at 71, that’s a no-load design day. Denver was frigid cold; the load center cities of Portland and Seattle, just not frigid cold. 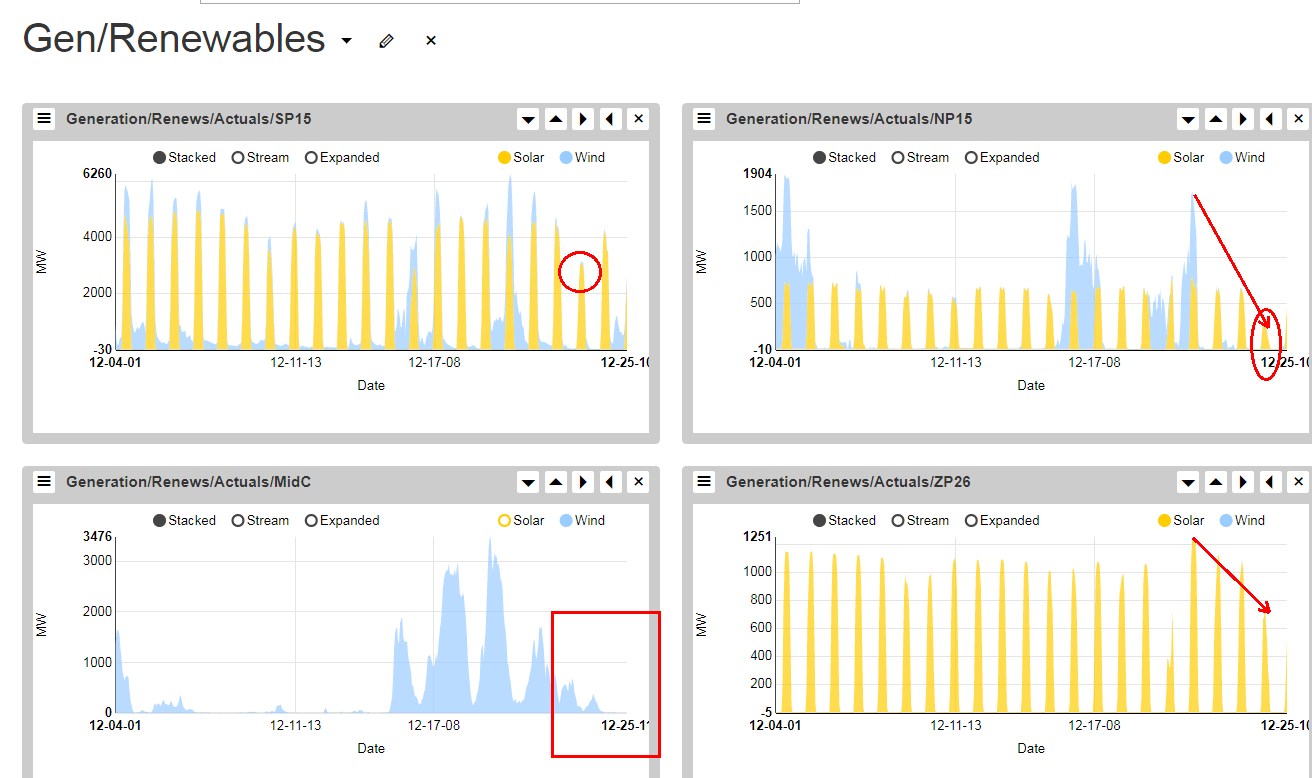 Strange doings in California’s solar as output plummetted over the weekend. On top of that, not much wind energy was added to the grid. 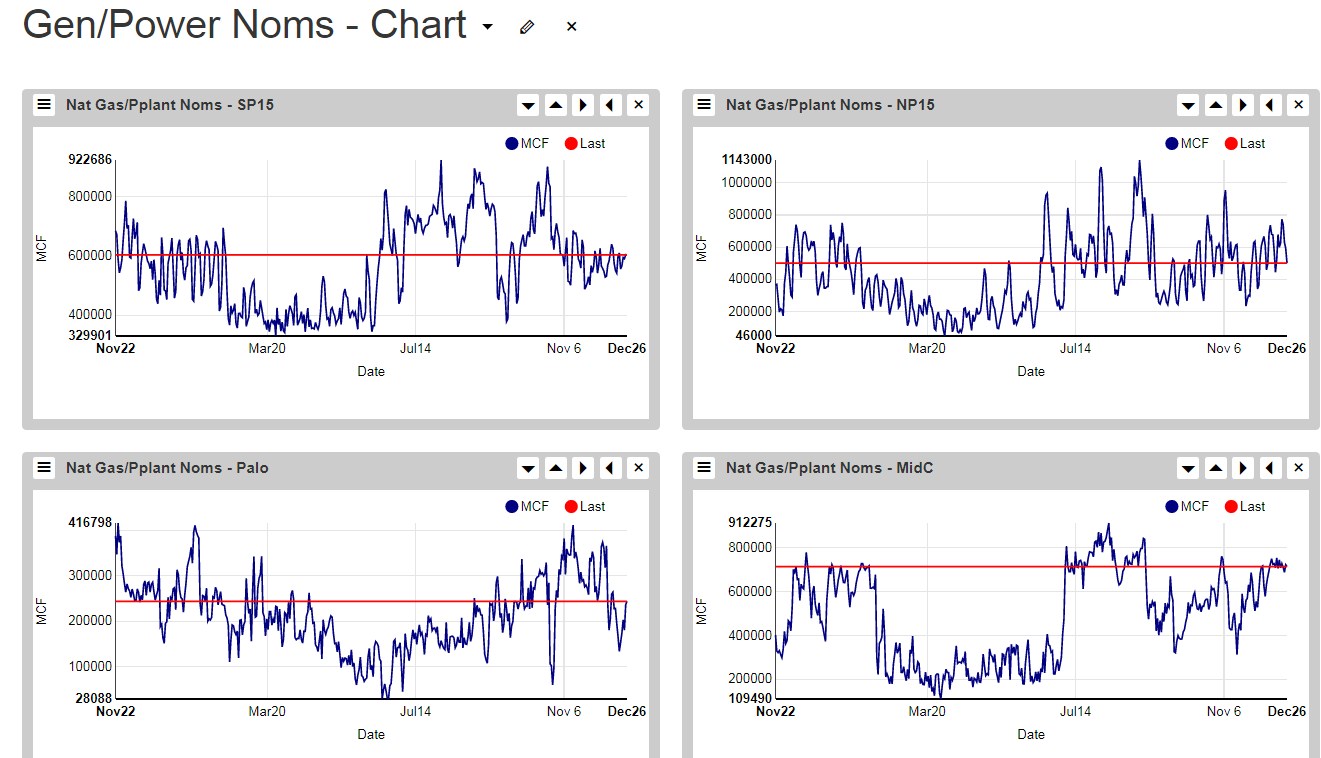 Gas noms for power plants are mostly sideways. All the nukes are running as of this post, and ISO outages are mainly unchanged.

The other “big” news is the rally in snowpack across the Northwest:

The Pend Oreille system went from the 70s to over 100%, so did the Flathead and Kootenai. California still is staring at a very low water year. With more realized snow, everyone’s runoff forecasts have rallied:

Ansergy’s forecasts materially lag the NWRFC, we like ours more and think the feds are too high. Even after the big dumps over the weekend, the NRCS plots remain more yellow than not: 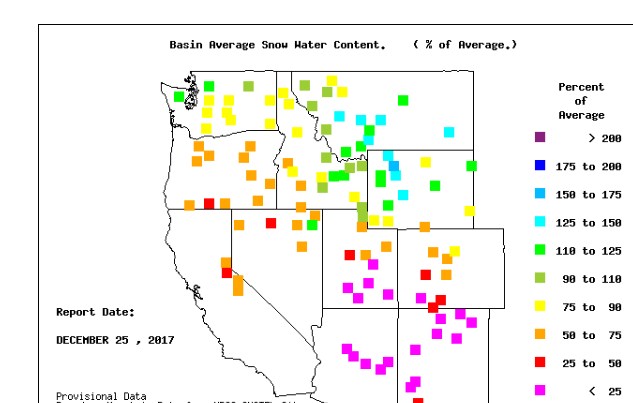 Contrast those with the early November anomalies: 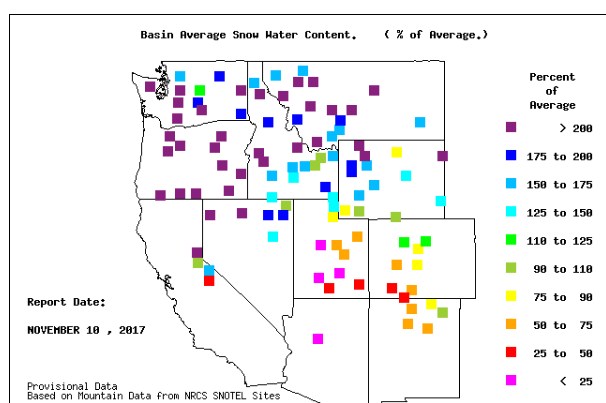 The water year remains young, now it’s a late-stage teenager, maybe a young adult, and will no doubt change its outlook many times between now and April. The precipitation outlook suggests a slightly below average outlook for the next 21 days:

This isn’t a “no precip” forecast, but is below average and will put downward pressure on the water supply forecasts. California is dry as well:

Be sure to read the Y-axis on those plots, these are reported in 100ths of inches, not inches. The Sierra’s will get snow, the skiing should be excellent, but the build to water supply will be negative. 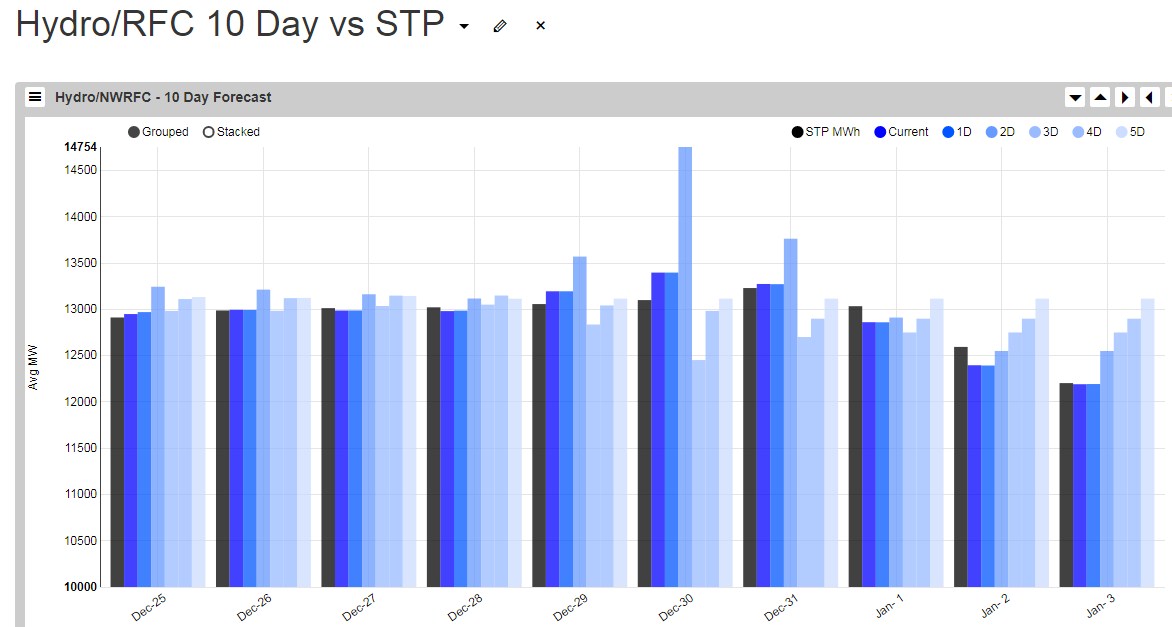 In theory, the NWRFC should release it’s STP update later today. Based upon the Friday 10-day, we don’t expect dramatic changes, yet each time we’ve made that bold prediction we’ve been proven wrong.  Take note of the cuts in the back end of this ten day.

Flows out of BC and into the US are growing stronger, now they are at the ten-year average; before they were setting lows.

Those strong flows into Lake Roosevelt allowed BPA to fill the reservoir without cutting production.

Flows across the regulated projects remain reasonably strong with lots of shaping taking place across the hours.

BC imported for a few hours yesterday, something they’ve not done in the last few weeks. The DC was uprated to 3100 and hit TTC limits on many hours, so did the AC. Path 15 has been derated and a few hours exceeded TTC. Path 26 has sent energy northbound nearly as many hours as it imported into SP, all of which demonstrates how fundamentally weak that hub truly is. Further confirmation, note the declining exports out of Palo.

This week is weaker than next week, plus the latter brings the return of school and business loads. We see nothing in today’s outlook to warrant risking your bonus in new trades, but let’s look at the markets before we make that call. We’ll be doing just that in a post to follow.