Our takeaway from the fundamental outlook was choppy this week and growing more bullish next, but the potential return of the Needles outage may throw a handful of curve balls at the batter; most of those will be of the bearish bent. 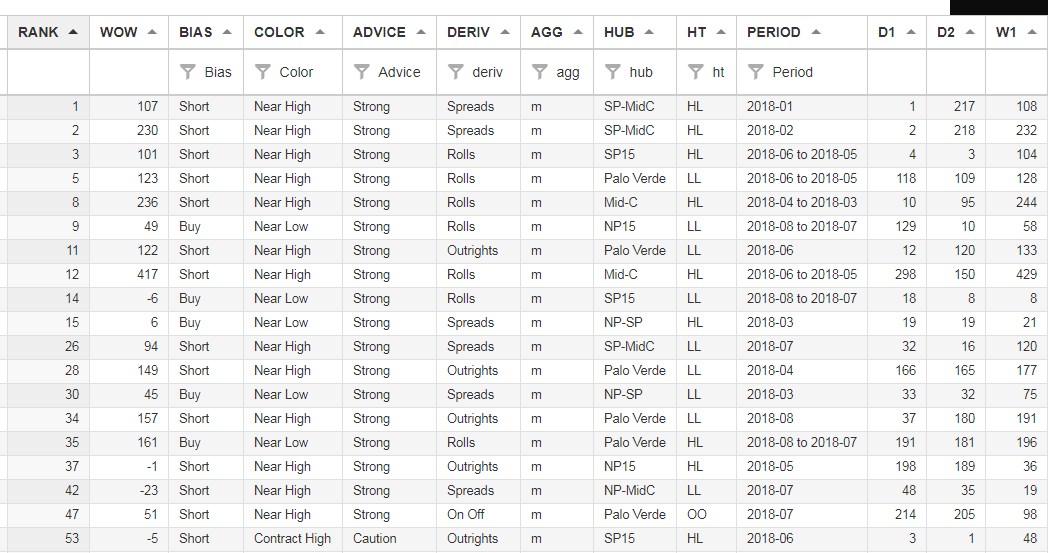 We begin our review by sorting APT on Rank Ascending, filtering on Agg=M. The above table places the best-ranked trades at the top; from that list, we’ve culled a few to discuss. 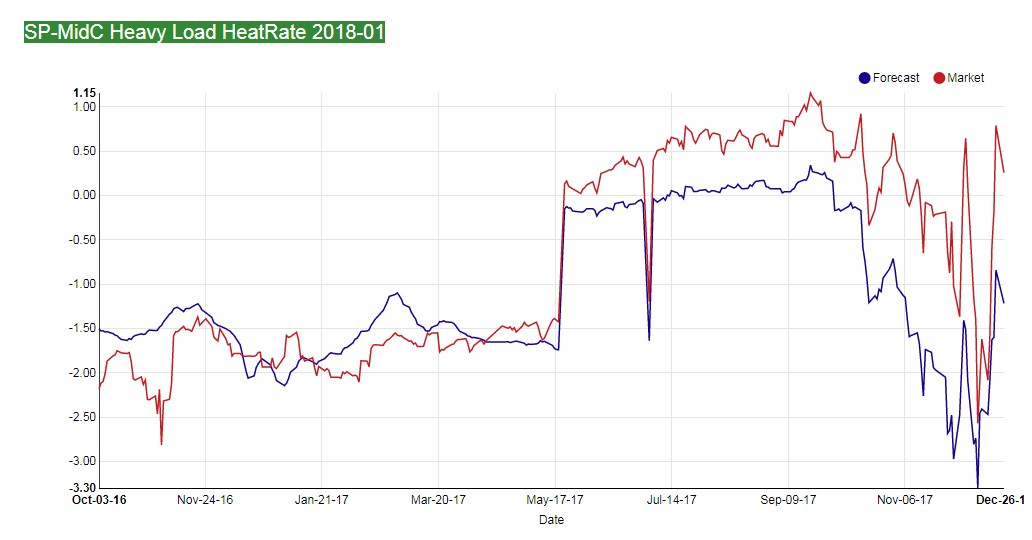 Crazy chart, this is the SP-MidC offpeak Jan spread; most of that volatility is driven by the uncertainty in the Jan Socal Citygate contract, and we don’t think the volatility is over. We’d be more inclined to short the Citygate leg and call it a happy day. Fundamentally, power-wise, we believe the MidC may have more upside from relatively tight water and hints of a cold January. 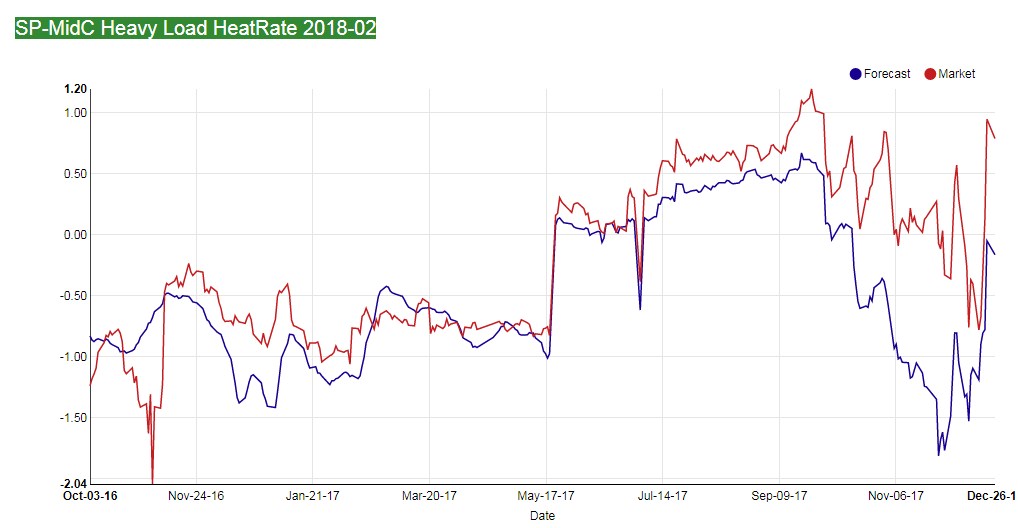 Same trade, just Feb and you get more time to allow fundamentals to settle out. It’s now trading near the contract highs, which may be fair value if the Citygate prices tank faster than the power price since the resultant heat rate will soar. SP may become a buy with cooler weather forecasted inside California and a potentially very dry water year. 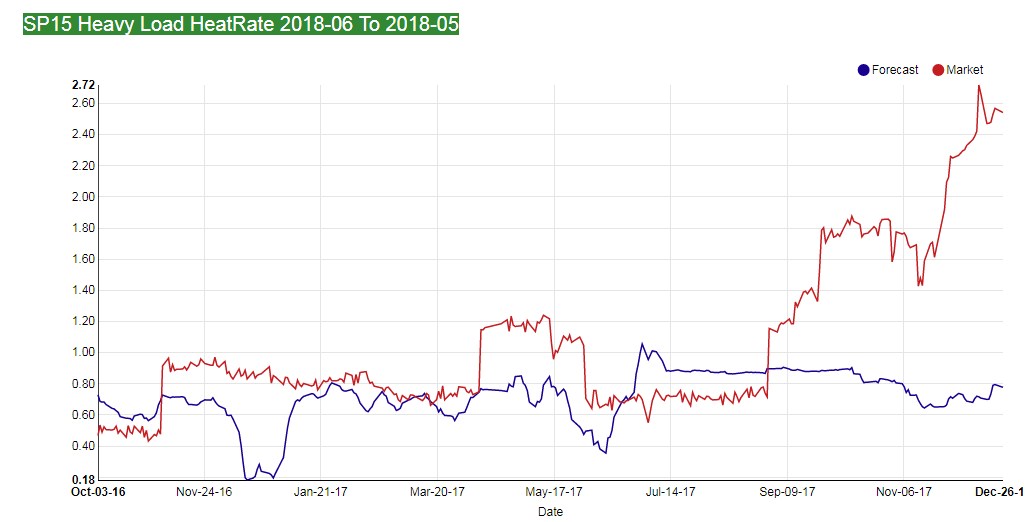 Looking further out in the curve, the June-May SP15 roll looks rich. Contract highs were realized last week, now it has come off a bit, but remains pricey, and we’d own it from the short side. 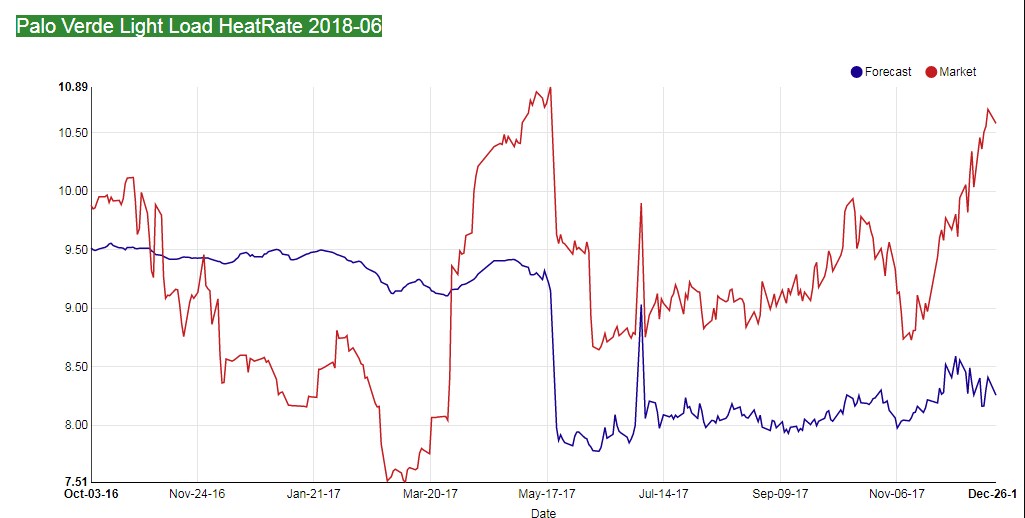 Another rich one is the June off-peak at Palo which is back to a contract high. This pays when the winter doldrums set in and the ISO posts a string of negative prices in the hourly DA markets. 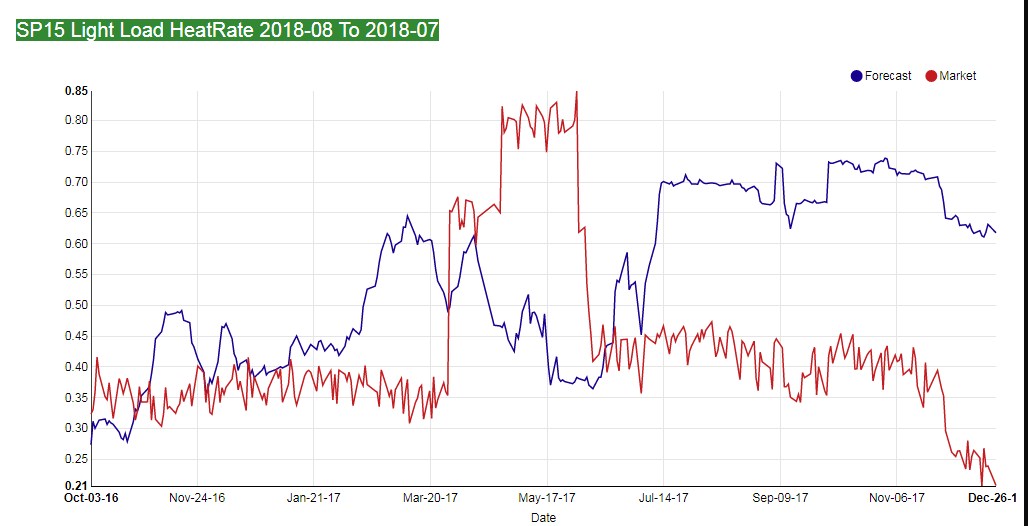 Way out in the monthly curve, the Aug-Sep offpeak roll at SP15 is setting contract lows. There is no fundamental reason for this; the water year is tight but there will be stronger streamflows in July than August, and historically there is hotter weather later in summer; plus the Northwest tightens up more in Aug than July. We’d buy it. 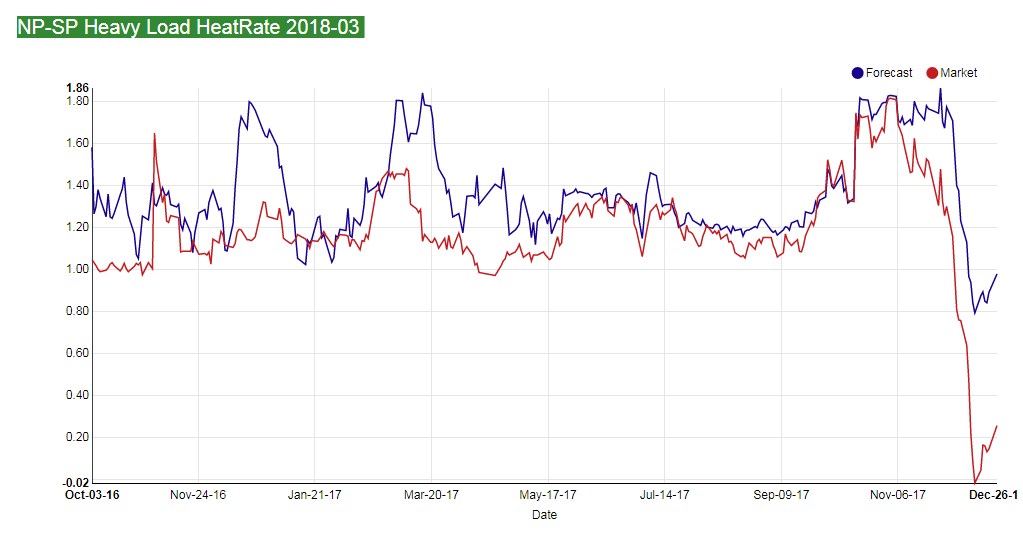 We wrote about this last week, the NP-SP March HL bounced of an insane low yet remains cheap. Some of this is tied to Socal Citygate, but if the Feb contract drops, which we think it will, the heatrate roll will rally. 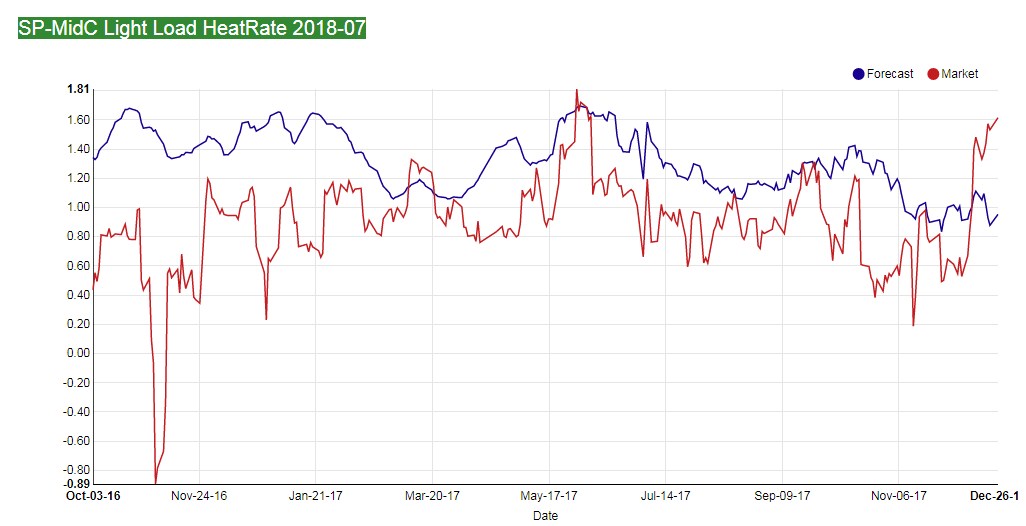 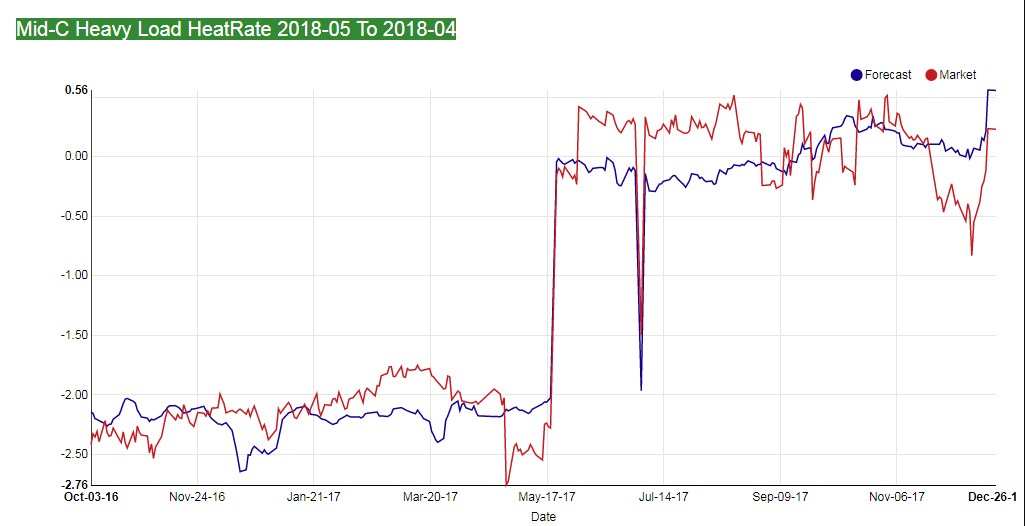 The May to April MidC roll has tightened up, maybe too much. Will depend upon the April draft which has rallied with the recent adds in SWE, but will those hold? It is still early, the sentiment for the runoff will change many times between now and delivery, and we’d just look for anomalies to fade until then; right now this is priced more reasonably than not. 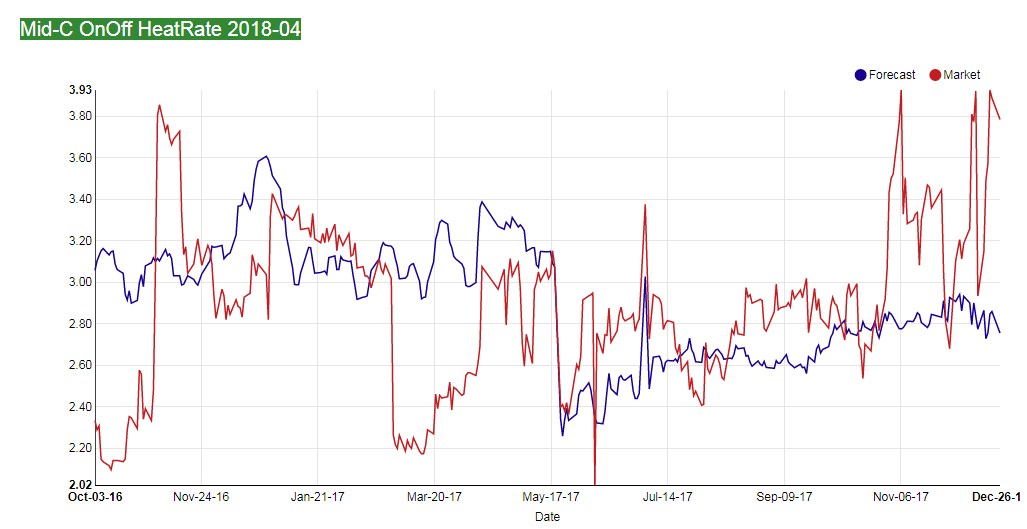 This isn’t, the April On|Off is back to a contract high and should be aggressively faded. 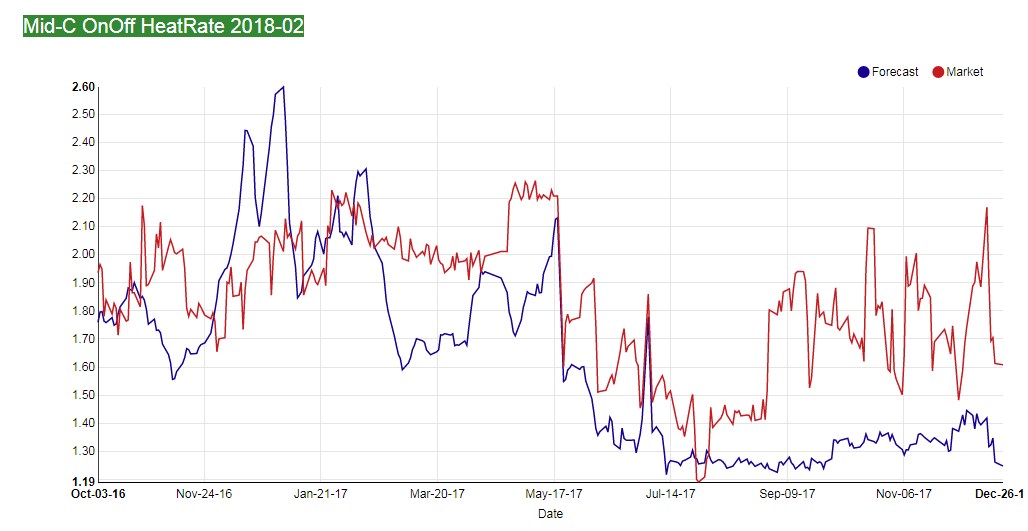 Similar trade, except Feb, and demonstrates how quickly extremes get reversed. 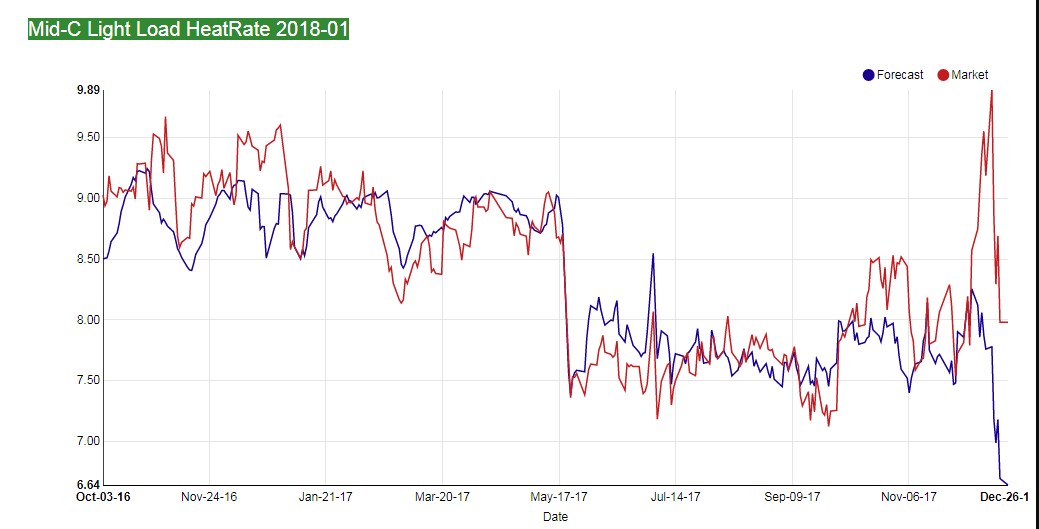 Want to own something “cheap”; look no further, the Jan LL is priced as cheap as anything in the curve. With relatively tight water and a coldish forecast, we like owning the MidC and would hold this. 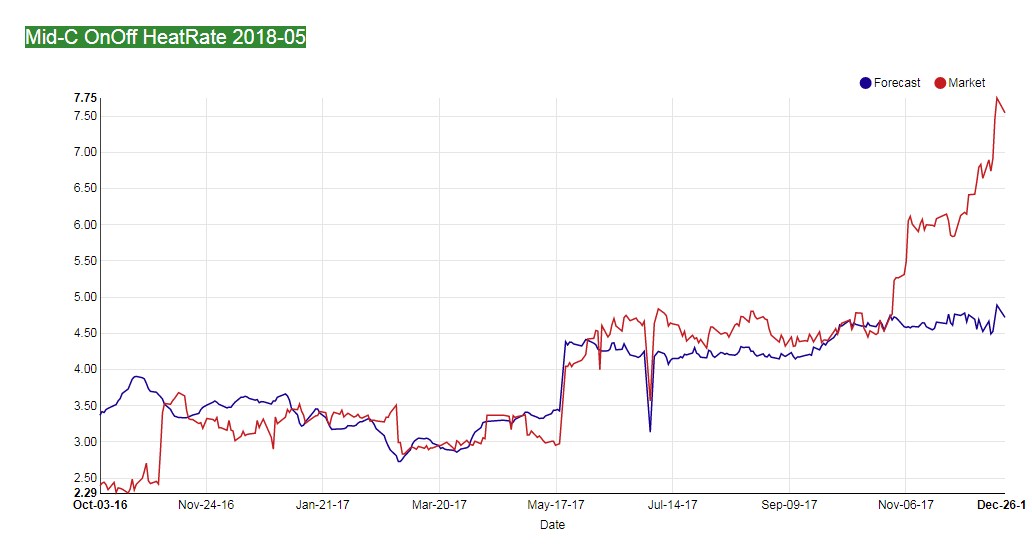 We found this by sorting on WOW ascending; this was one of the most significant reversal moves, but like it from the short side. Big water will drive a wide on off; we don’t see that today and are on the lookout for anomalous price moves, this is one of those.