The much-feared cold in the Northwest (and elsewhere) has dissipated, displaced by not as cold; not warm, just not as impressive. Dry weather continues to be the Northwest theme. However, California has a major storm system in its 11-21 day outlook. This week we should begin to see gas flowing on the TWP line into SCG if you believe the maintenance schedules:

One record suggests a return on the 25th; the other remains “TBD.” Meanwhile, SCG is flexing its flexibility to meet demand through its storage and interties. 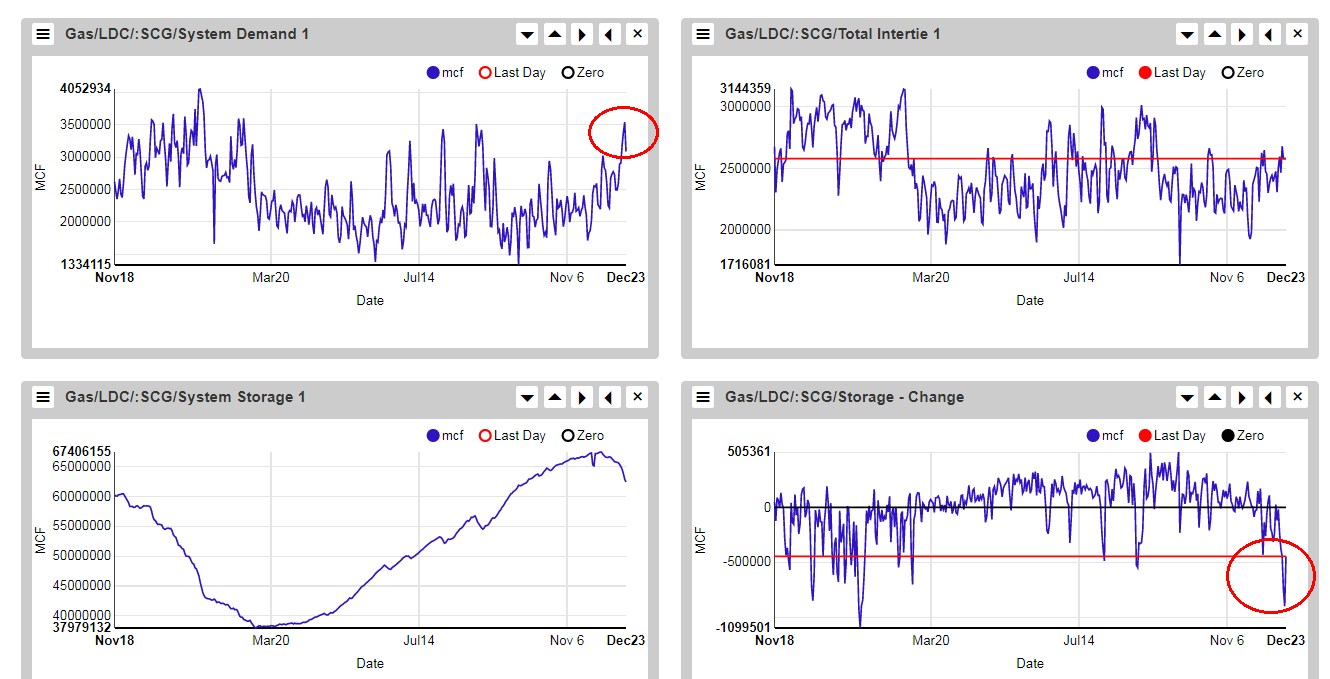 Total System Demand has surged, even though it isn’t that cold, and all of that incremental demand was met by significant pulls from storage; the largest since last winter. Though they pulled nearly a BCF out of storage, SCG also squeezed more gas out of its interconnects. Still, the spot price inside LA remains very high:

Even the Socal Border price traded premium to PG&E; quite odd given that the congestion is inside Socal, not out. The term markets don’t believe the Needles line will return in January: 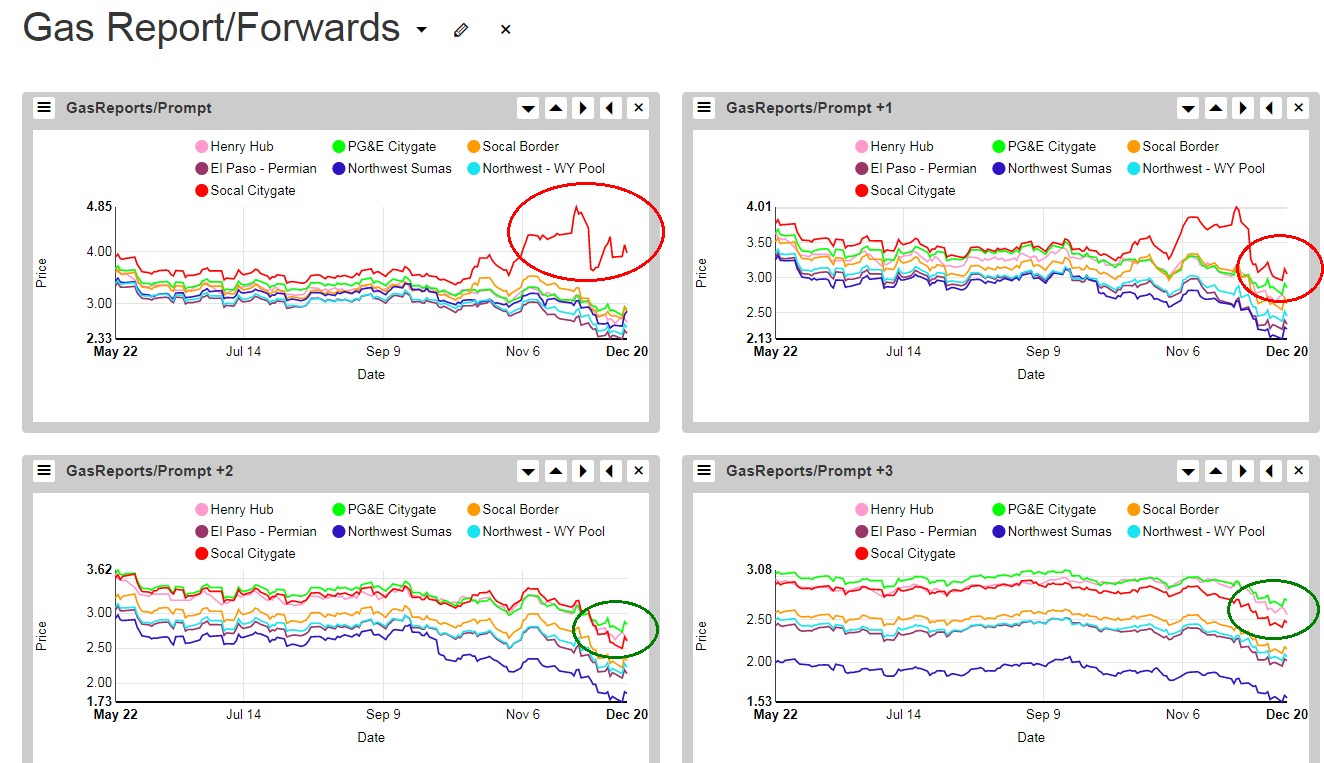 Some holdouts even think the problem lingers into February given Socal’s premium to PG&E (and Henry). By March there is no premium and the south trades at a discount to the north. For the rest of the hubs, the takeaway needs to be the downward sloping lines; gas is growing ever weaker.

So are the Day-Ahead LMP markets; the week on week change at SP15 is dramatic. Also worthy of mention, the spread between NP and Northwest LMPs is minimal, not even enough to cover losses. Even the Palo-Sp congestion is abating. 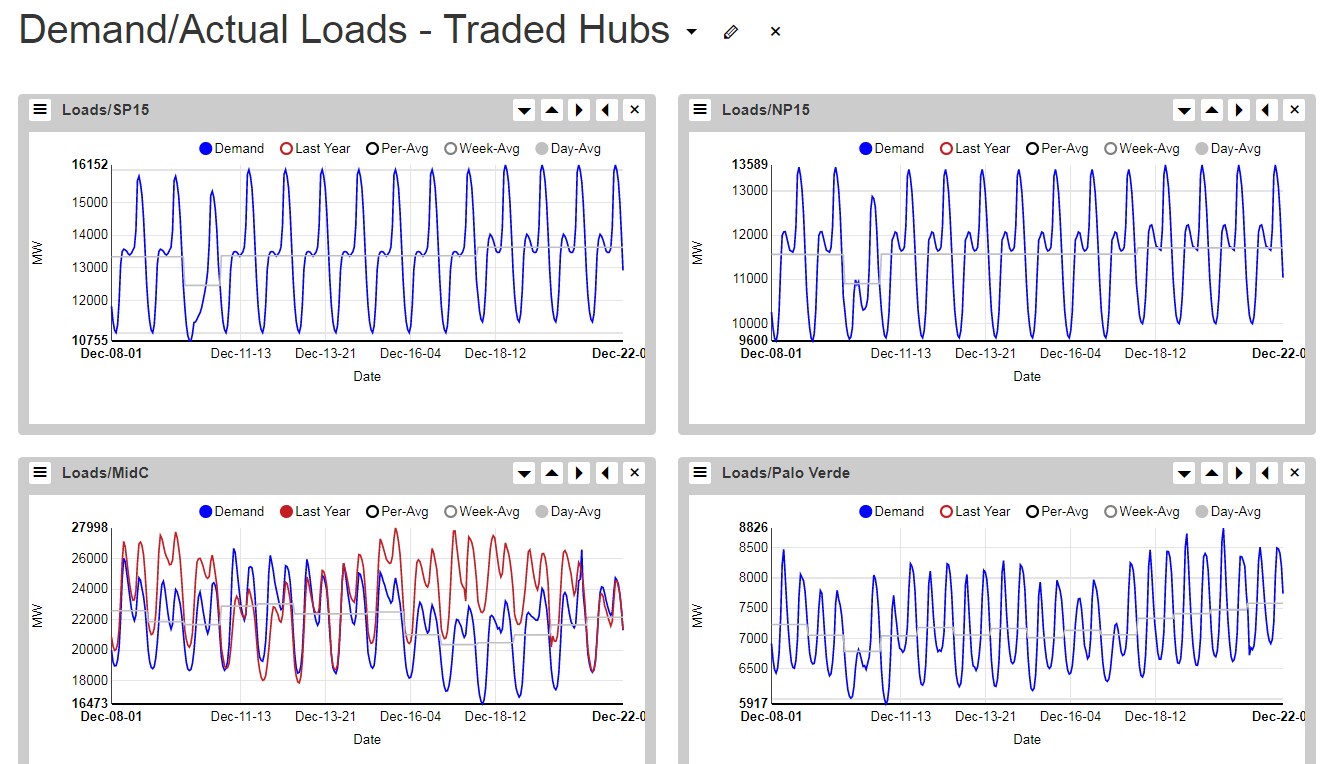 Loads are mostly sideways, but note the delta at Mid-C between this year and last year. Reinforces how weak this year is. 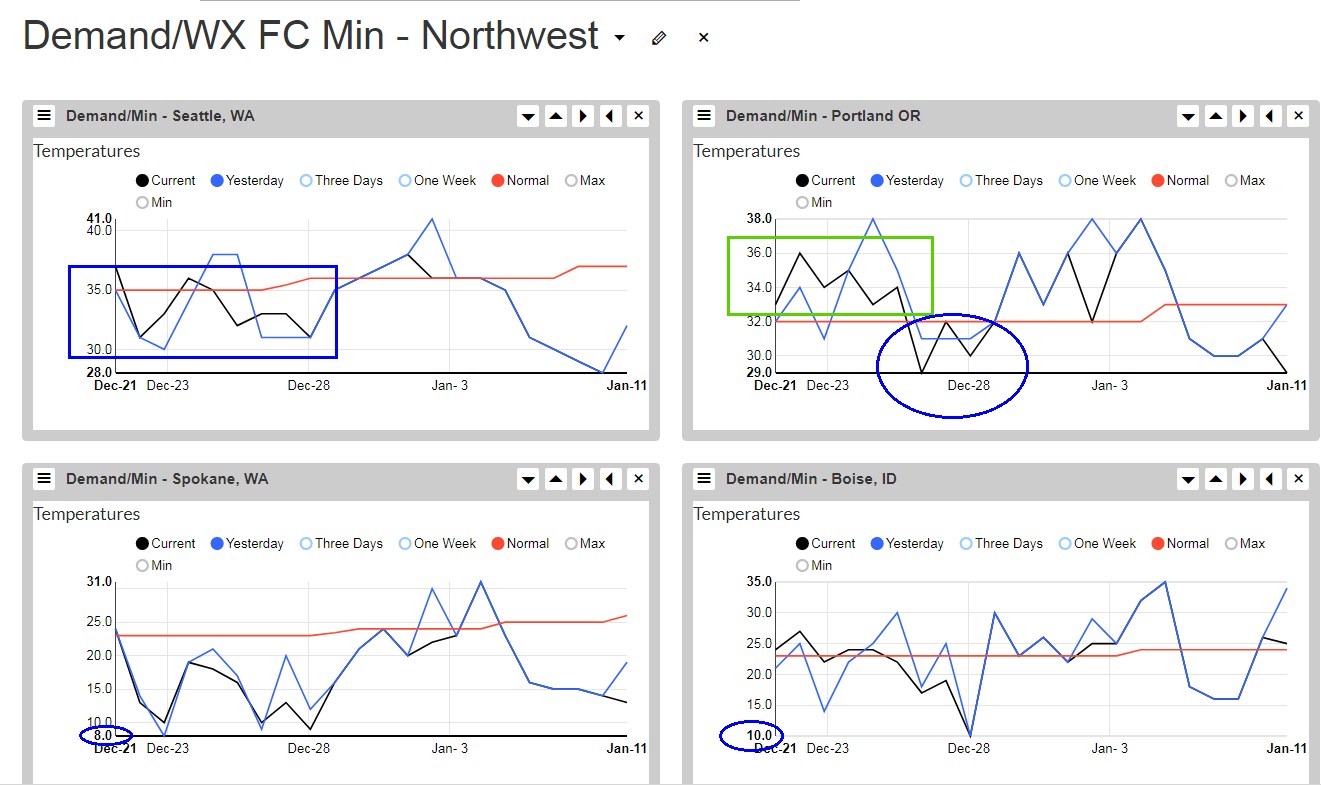 Morning lows stay cold in Seattle, but Portland has warmed up. Both cities show hints of another arctic blast in days 11-21; too early to bank on those, but they aren’t positive anomalies, either.

Monday’s lows in Burbank were below average, today they are above. The northern portion of the state keeps its cooler outlook for the lows, but the highs are all above average.

Palo swings back to warm (above average) while Salt Lake and Denver don’t swing at all; check out that low-temperature volatility at both cities. 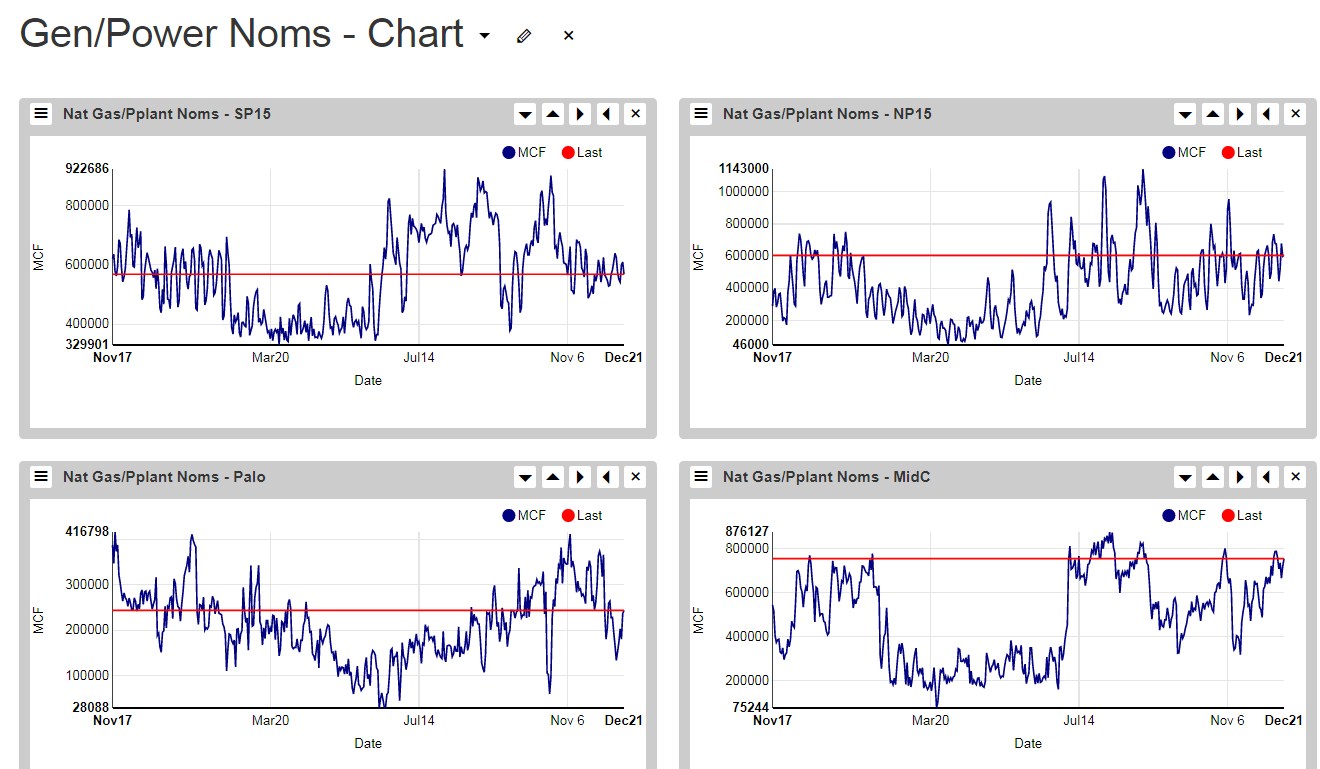 Northwest gas noms remain strong, Palo saw a slight surge, while SP and NP are about normal for this time of the year. 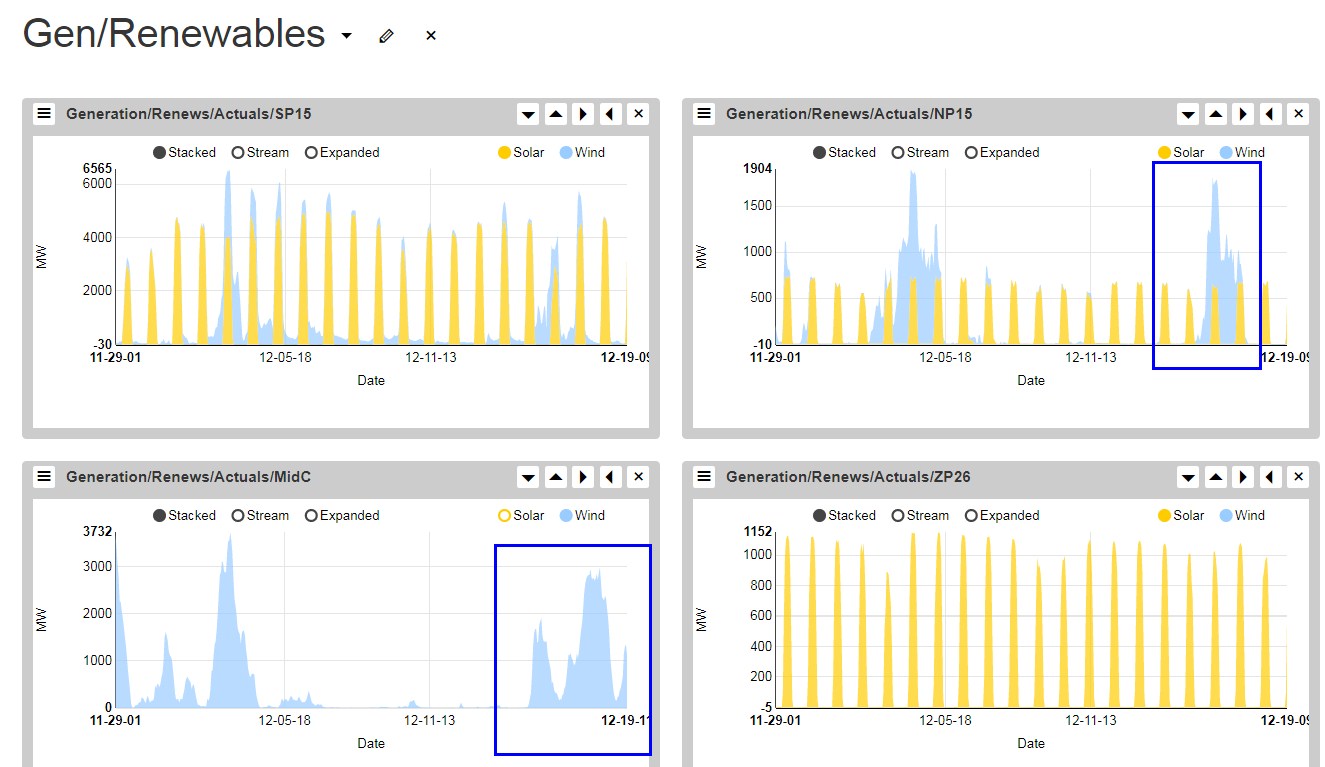 NP saw some massive wind; SP had strong wind but note the cuts in solar while the wind rallied. It seems the ISO didn’t need/want that free energy. 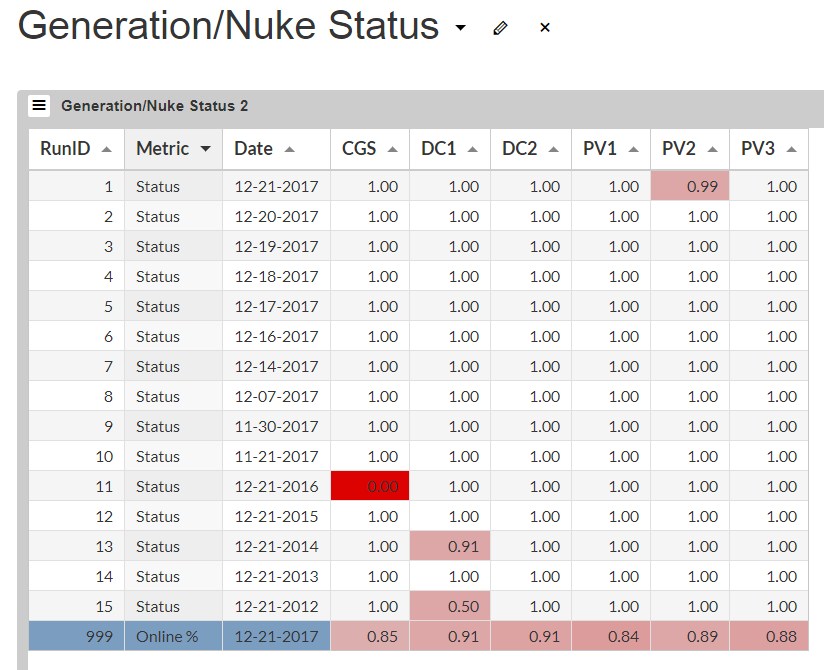 Palo Nuke #2 burped, its production dropped to 99%. Not sure what’s happening there, we’ll be watching. 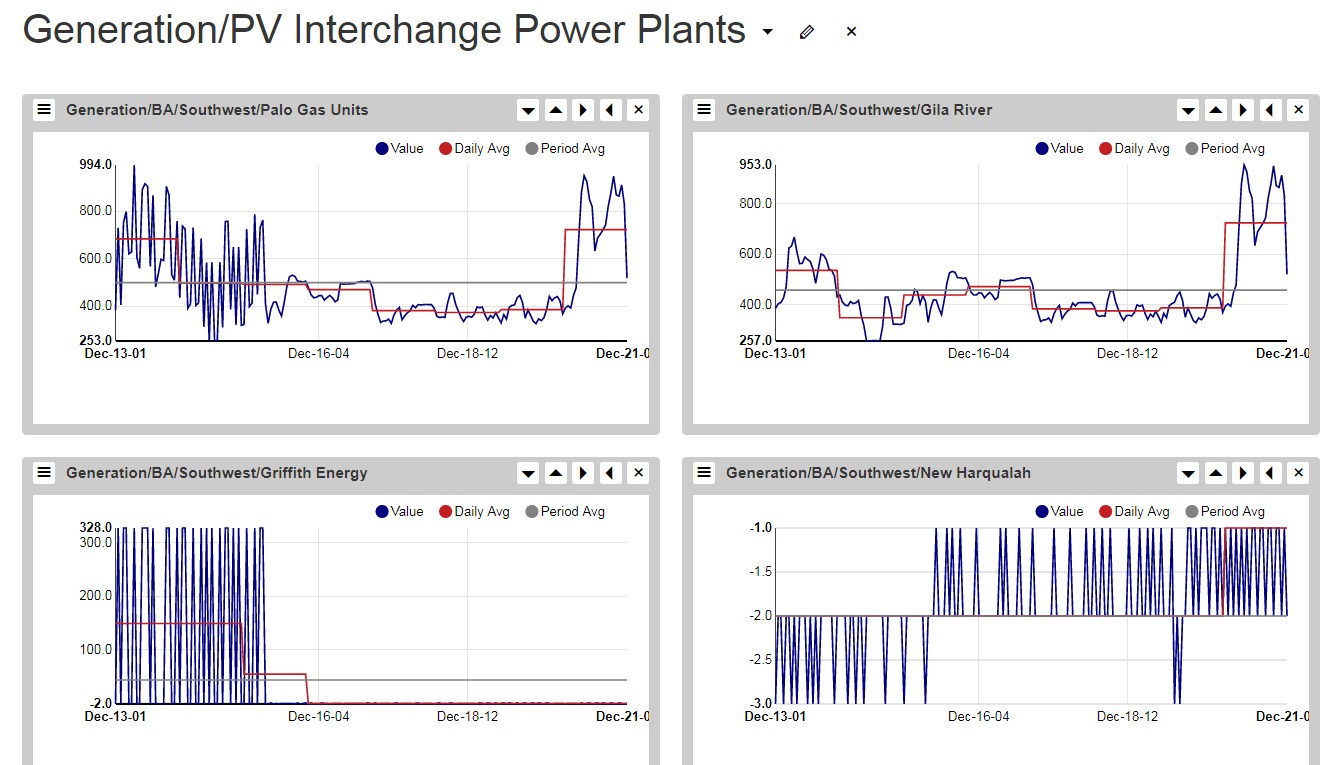 California is dry for the next ten days, then a substantial storm arrives, perhaps the biggest of the year. Still too far into the future to bank on, only worthy of a line in today’s blog, but keep an eye on that.

From a historical perspective, the state’s hydro energy production is still robust; those rallies in HL and LL from a few weeks back were both storm-driven; if this latest comes to fruition, we’d expect more output around the first of the year.

The California river plots are only interesting because nearly ever station is at, or below, average. Also, none of these are doing much intra-hour shaping. 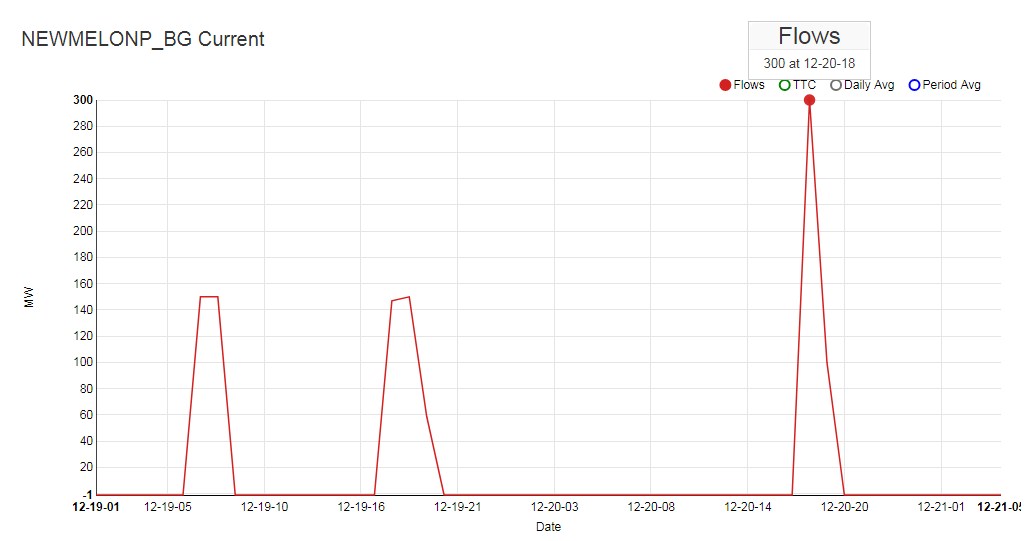 This “hydro” report comes from our ISO Transmission group and plots production from New Melones. The only time that plant is called upon is during the post-solar hours of 18-19, and some days its called not at all.

The Northwest precipitation outlook is not dry, but it is about 70% lower than average (10 years). Kalispell is poised to get a big dump today, then nothing for ten days. Yesterday there were hints of a new system, but most of that has evaporated. Overall, a dry and bullish MidC outlook.

The last few days have been wet in the Northwest, and the anomalies (SWE) have soared; where the region was looking at the mid-80s, some stations in the 70s, now most are approaching normal. 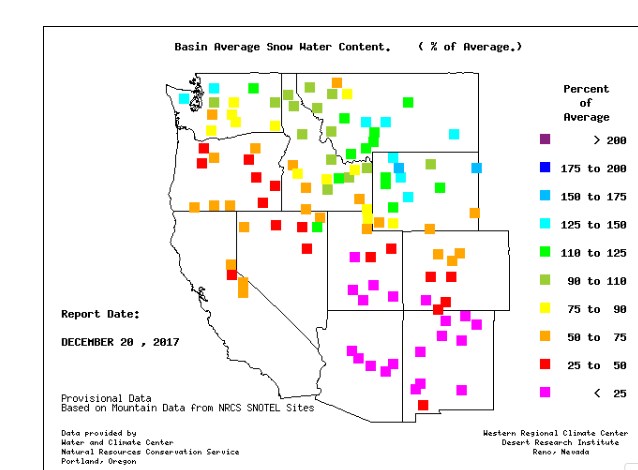 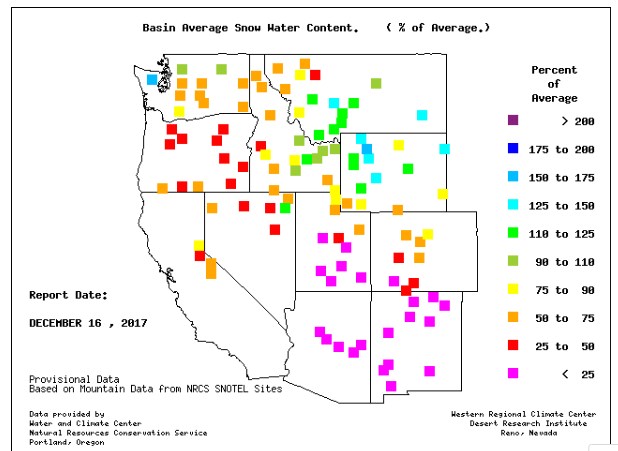 Quite a reversal, but with a new dry outlook, those green squares will revert to yellow.

The Ansergy Water Supply Forecast remains more bullish than the NWRFC. We’ll stand by our numbers, though both have ticked up and now our guess at the Corps Flood Control TDA number will be in the mid-90s, though doubt that triggers a draft below 1255.

Coulee plots are a story; BPA filled the reservoir, despite below normal temperatures, by cutting outflows. Another tale is Monday’s STP ….

We don’t get the rally in the NWRFC’s 120 Day outlook; every month is up.

The red line is the Ansergy forecast that does not incorporate the STP; it is mostly beneath the NWRFC’s daily STP.

Imports from Canada remain quite strong, even though exports to California have been weak the last few days; maybe from all of that ISO wind energy?  Palo jacked its exports into the ISO, maybe because the congestion backed off. Finally, the Path 15 rating has been cut, not that the line ever approached capacity.

Weather weakened but remains moderately dry. With a possible return of the TWP line (800 MMCF), the SP term markets might be heading for a significant jolt.  Long vs. Short  is relative to both Fundamentals and Market Price; in a post to follow we’ll look at those market prices.