Cold is the name of the game in the Northwest, especially on the eastern side of the cascades where Spokane shows nearly six degrees below normal, and Montana upwards of nine degrees.  NP and SP on the other hand continue to project warmer than normal, with some anomalies above five degrees.

Precip isn’t moving in the right direction if you’re hoping for copious amounts of snow to join the cold snap in the Northwest as all stations other than Kalispell project lower than normal precip totals.  There should still be enough to add to the snow pack however. 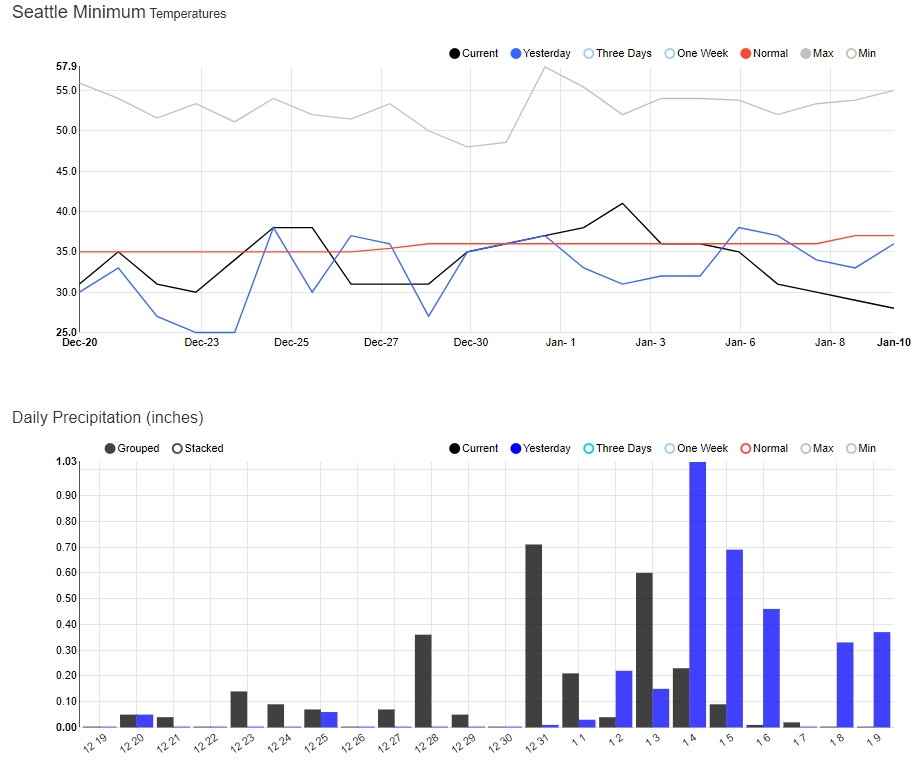 Seattle’s minimum temp forecast continues to project well below normal through the weekend, though it’s trending warmer compared to yesterday’s forecast.  Lows are set to bottom out at 30 on the 23rd, five degrees below normal, though considerably higher than projected just a couple days ago.

Look for light precip on most days for the next week.

Big forecast increases for Portland when compared to yesterday where as many as seven degrees were added on the 22nd.  That gain was mostly carried on through the 26th as temps again climb above normal.

Looks like Spokane will get the brunt of the cold snap as unlike Seattle and Portland, but its forecast is trending warmer as well.  Temps will fall as low as eight degrees by the 23rd, 15 below normal.  Despite the increases, just one day is projected above normal through Jan 2nd.

After briefly dropping below normal today, San Jose is projected to climb as high as 65 by Christmas, eight degrees above normal.  Most days leading up to that high are moderate increases over yesterday’s forecast as well.

Sacramento will get a taste of wintry weather on the 21st where lows will plummet to 30 degrees, eight below normal and projection as yesterday.  Temps are forecasted to work their way back above normal by the 25th.

Phoenix will touch its 10-year low line on the 22nd as temps fall to 37 degrees, six below normal.  Lows should linger below average through Saturday then take a sharp turn north, eventually leading to lows 10+ degrees above normal by the 30th.

Burbank is working its way from a high of 60 today (6 below normal) to an eventual high of 77 by Christmas, ten degrees above normal, and considerably higher than projected yesterday.  A holiday and mild temps should make for interesting demand.

Denver’s temperatures are sliding down to an eventual low of 1 by the 23rd, seven degrees below normal.  The big news is the significant increase from yesterday’s forecast as the 23rd comes in 16 degrees warmer, and should eventually see the return of above-normal temps by the 24th.

Sharp increases in day-over-day forecasts for Salt Lake City as well where minimum temps rose as much as 12 degrees over yesterday’s forecast.  The 22nd is now showing up with a low of 30, eight degrees above normal.  The remainder of the month should stay mostly above normal according to the current projection. 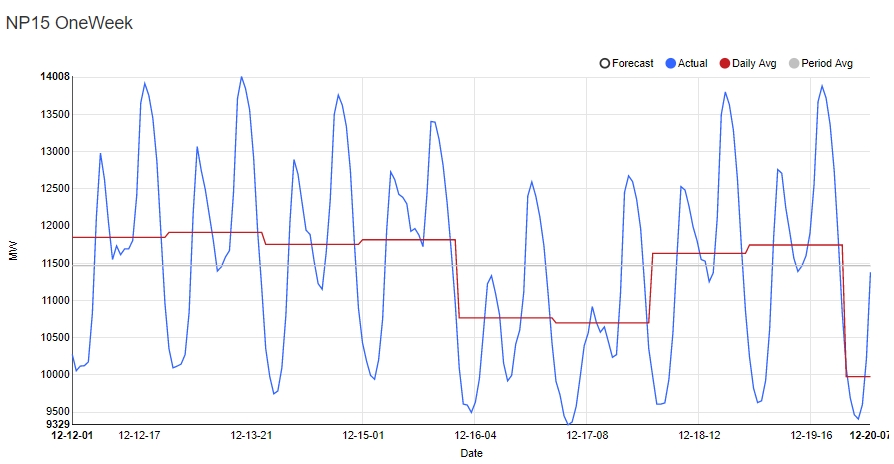 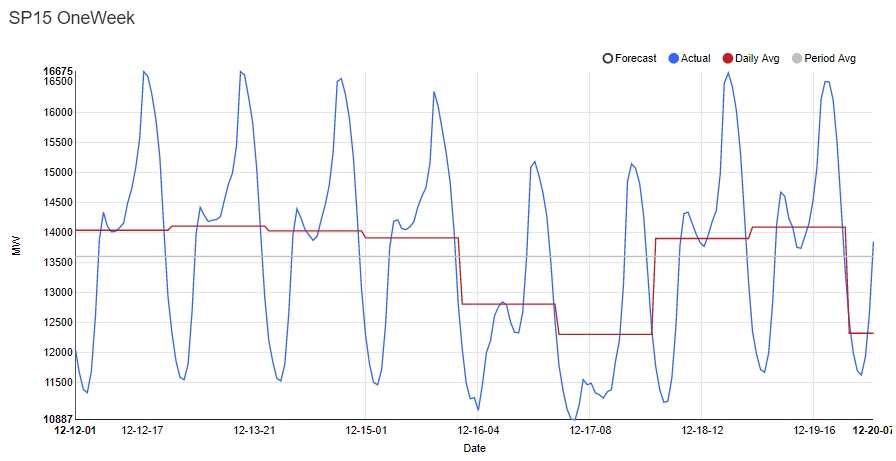 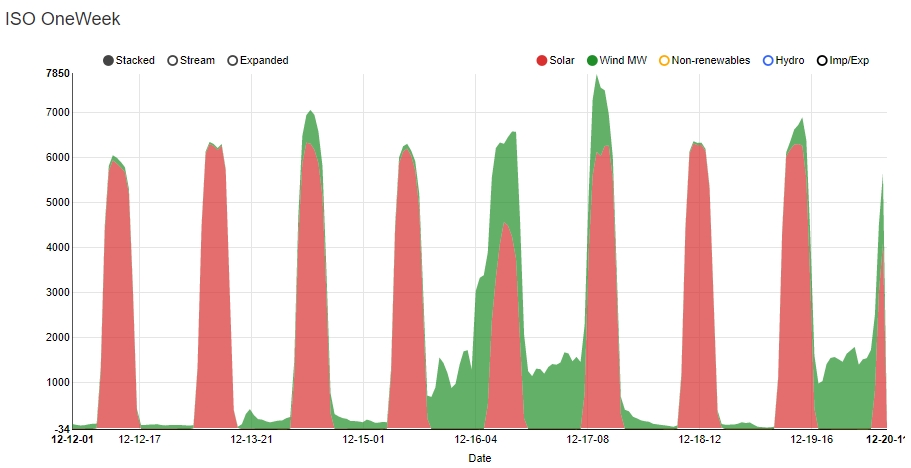 Wind generation picked up steam last night, peaking at 1,828 MW at 3AM, the highest off-peak generation of the week.  Solar topped out at 6,296 MW yesterday, just 20 MW short of the day before. 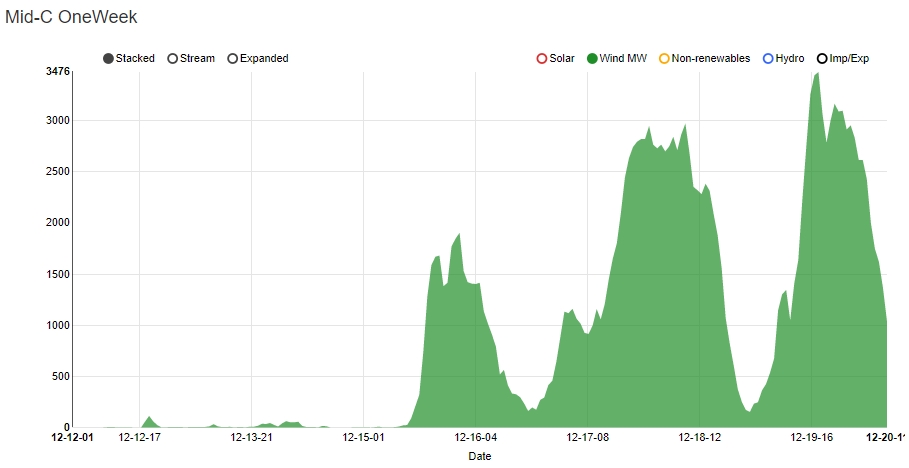 Third consecutive day of heavy wind in Mid-C yesterday as generation peaked at 3,476 MW in the late afternoon hours, easily the highest peak of the week.

Today’s 10-Day forecast dropped nearly 1,100 aMW compared to yesterdays and continues to pace behind for the remainder of the forecast.  STP maintained a higher projection for today and tomorrow as well, before pacing behind the 10-Day through the 29th. 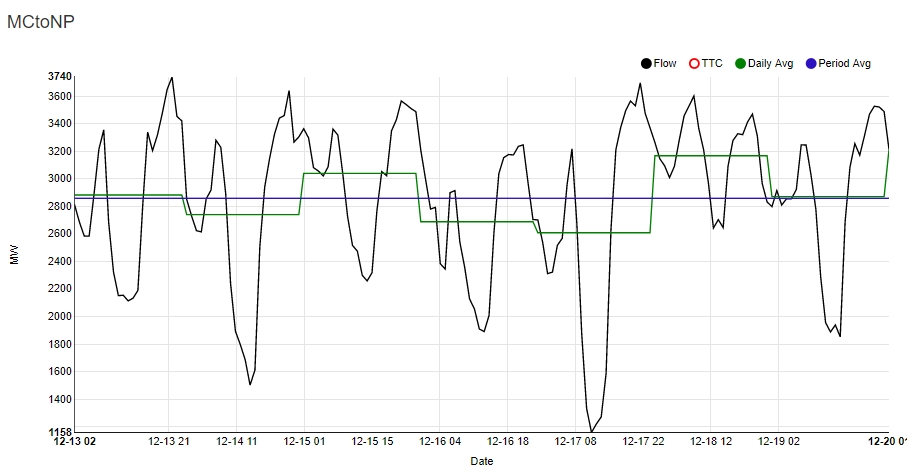 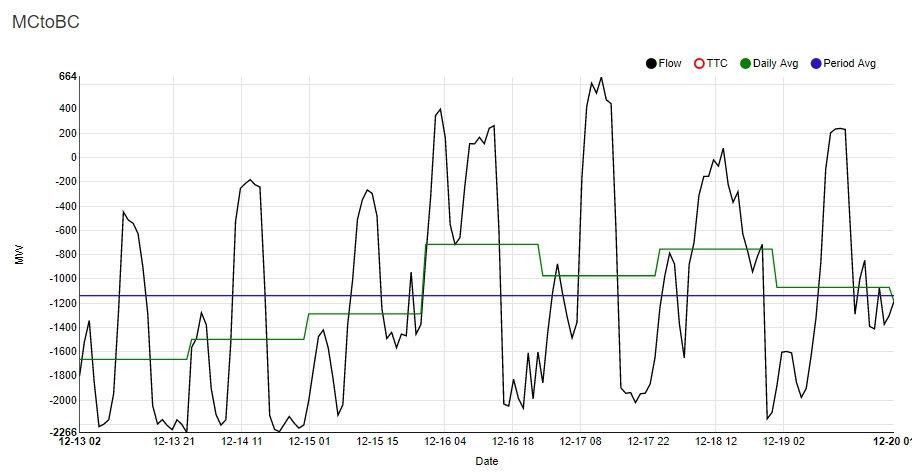 Imports into Mid-C increased yesterday, bringing the average daily flow from BC to Mid-C to 1,070 MW, a daily increase of more than 300 MW.  Despite the heavy imports, flow managed to move north for four hours in the afternoon, peaking at 240 MW at 2PM.