Dry, not cold; that is all you need to know. That and the ISO markets are dysfunctional:

No, the path was barely used. Why wasn’t ZP filling the line, chasing those $120s? Dysfunctional.

It’s all about gas, which is remarkably weak everywhere but inside Socal; the spread to the border is approaching 2X; the spreads everywhere else are nonexistent.

The heat in LA is abating, yet will remain above normal til the holiday. The rest of the state is above average but not warm. 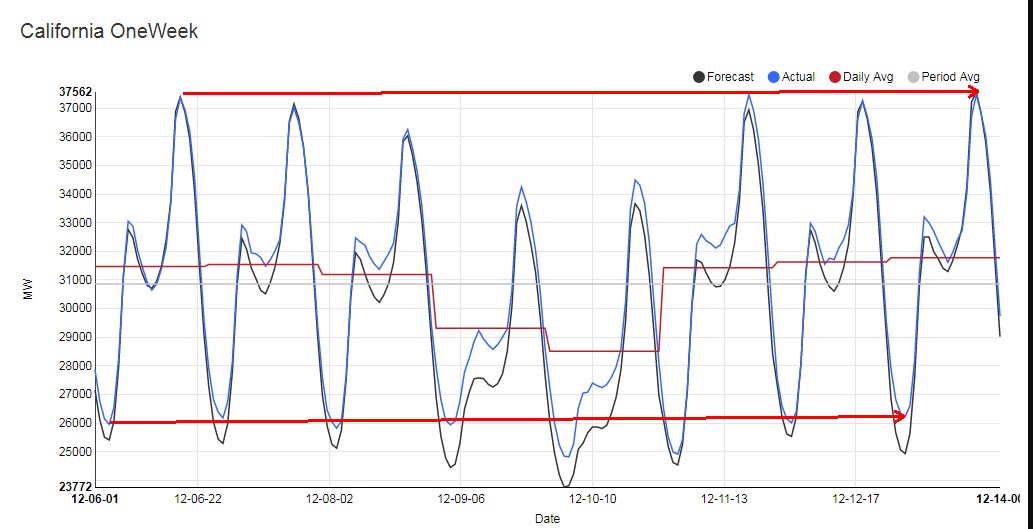 The interior hovers around averages and shows hints of colder weather around Christmas. 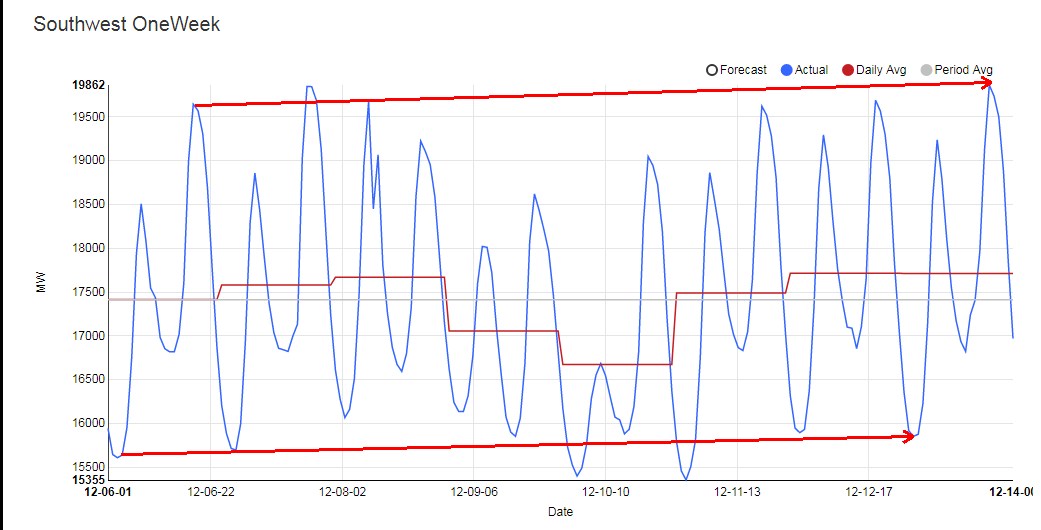 Southwest loads are up in both the peak and troughs. 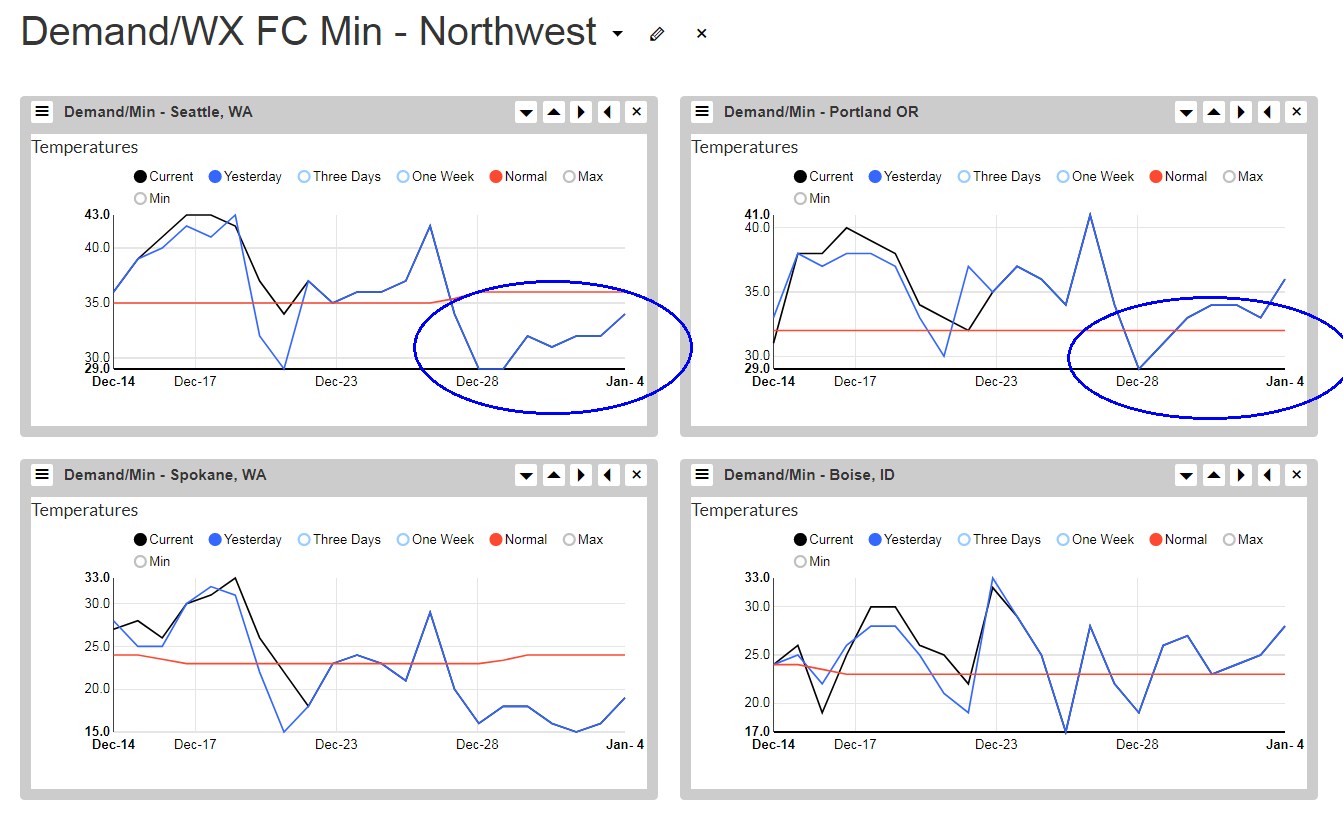 The mighty MidC is warm now but growing increasingly colder, ever more bullish; in this forecast there lie hints of real cold; let’s keep an eye on that! 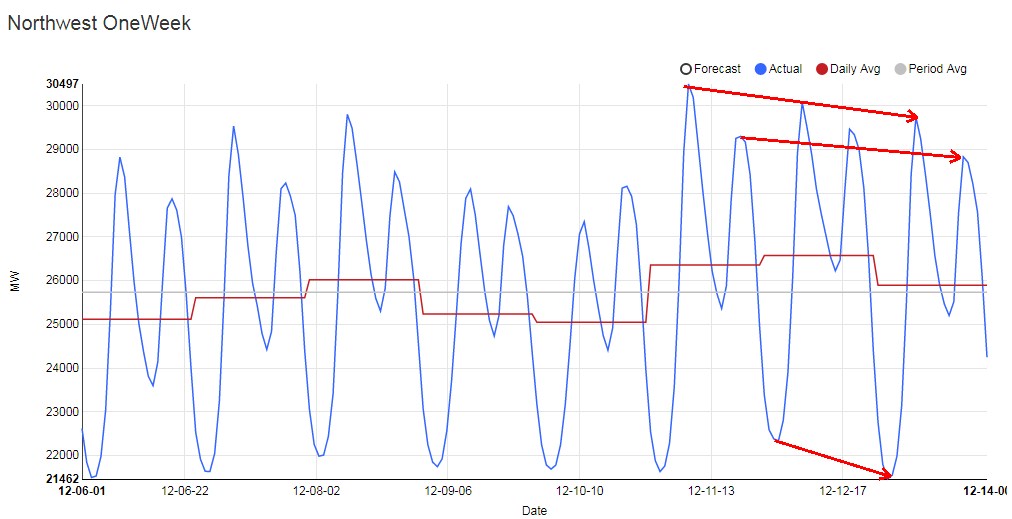 For now, though, loads are weak. Weak compared to Monday, but those end of month days arrest our attention, especially with such dry weather of late (and it stays dry!)

Salt Lake City saw some freezing weather, down to the low 20s; colder than Denver. Burbank was hotter than Phoenix, but it wasn’t “hot.” Seattle/Portland are just mild, though the morning lows are chilly. 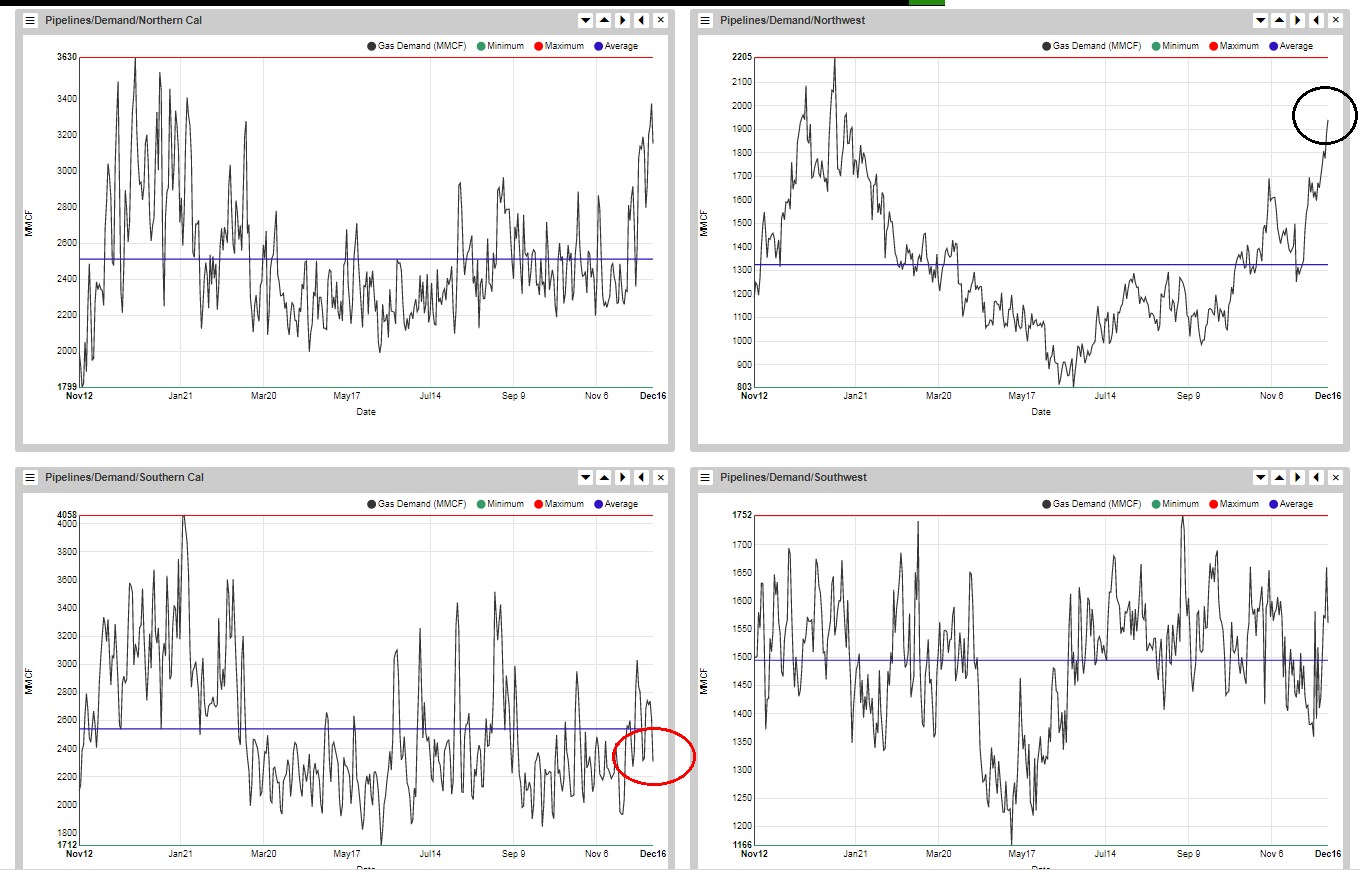 Core gas demand rallied everywhere but where the gas price was the highest – go figure. Socal demand is the weakest of all the hubs yet boasts the $5s; Northwest core demand is soaring and if those temps hold will set yearly highs by the holiday. 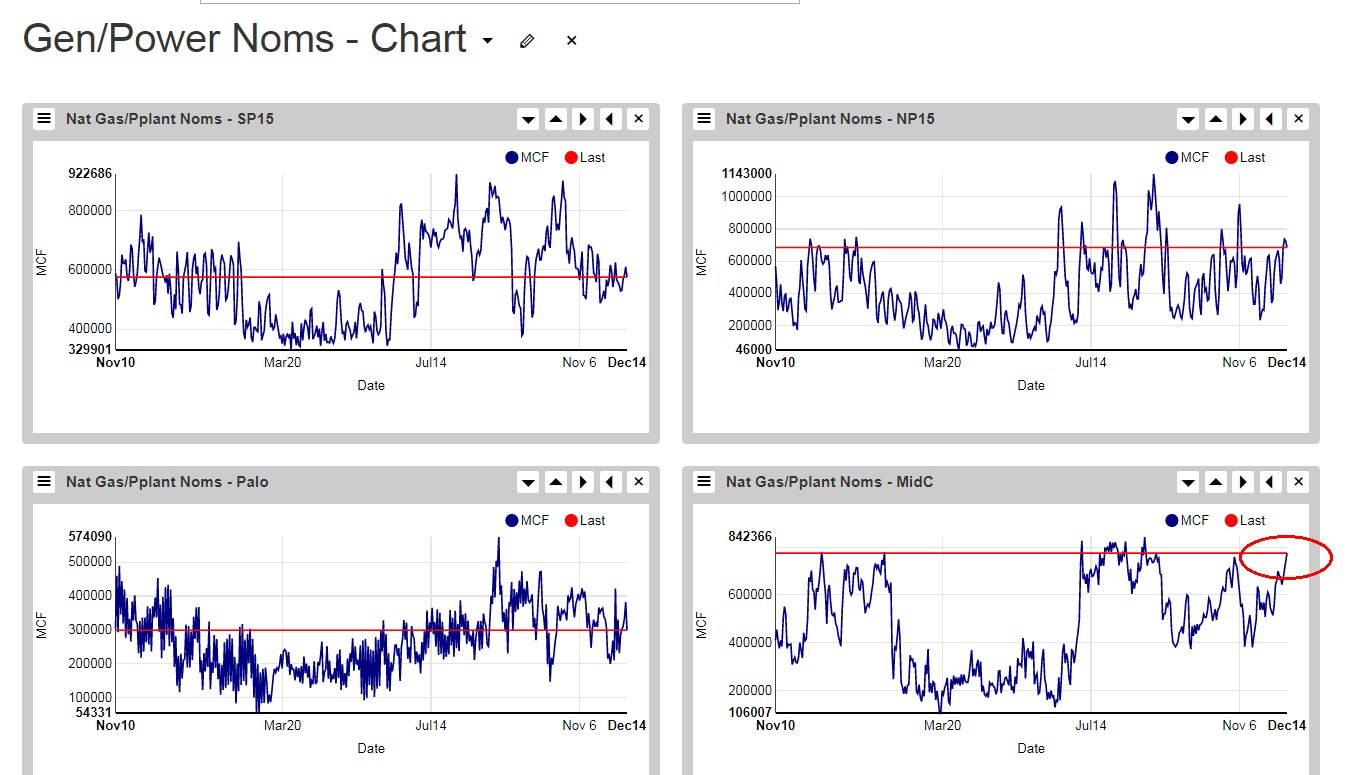 Power plant gas nominations in the Northwest are off the charts; the rest of the WECC is weak. 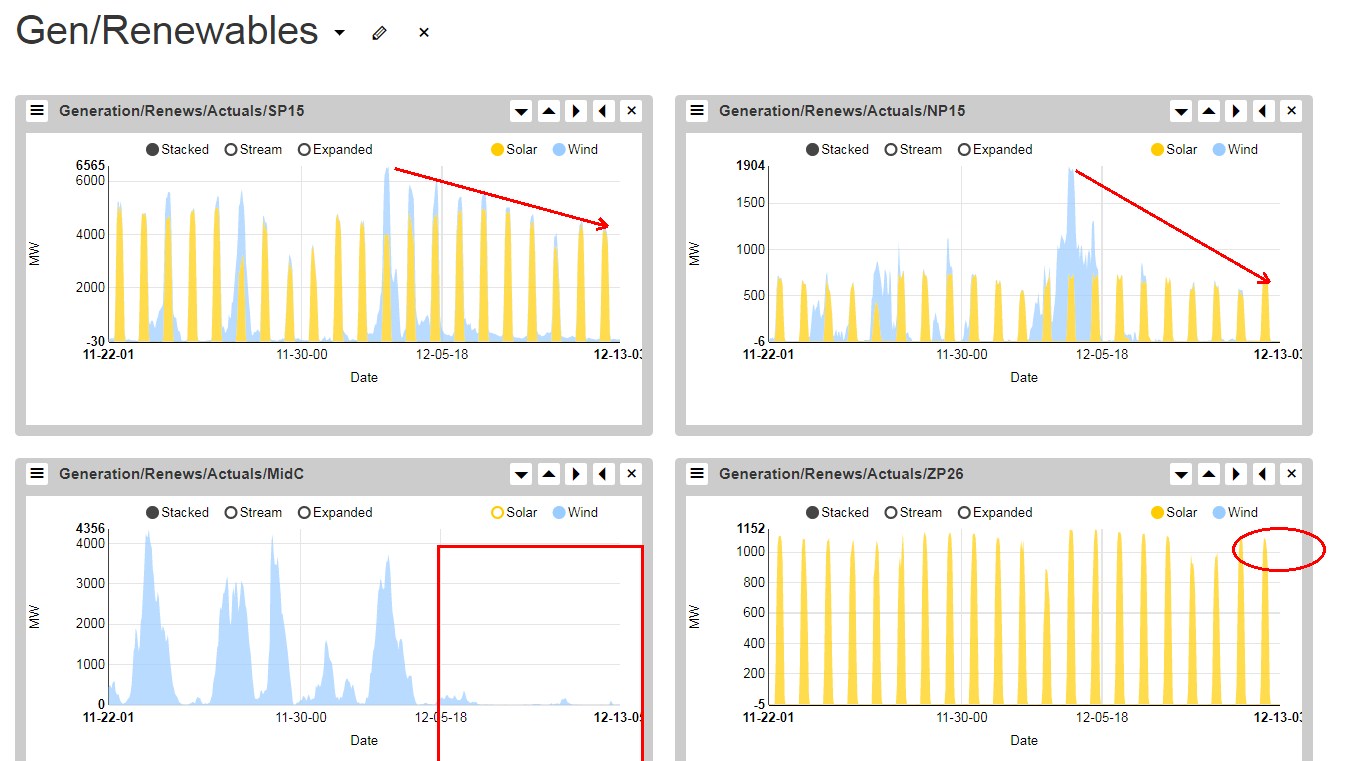 Renewables are weak, too. Wind is non-existent across the WECC. 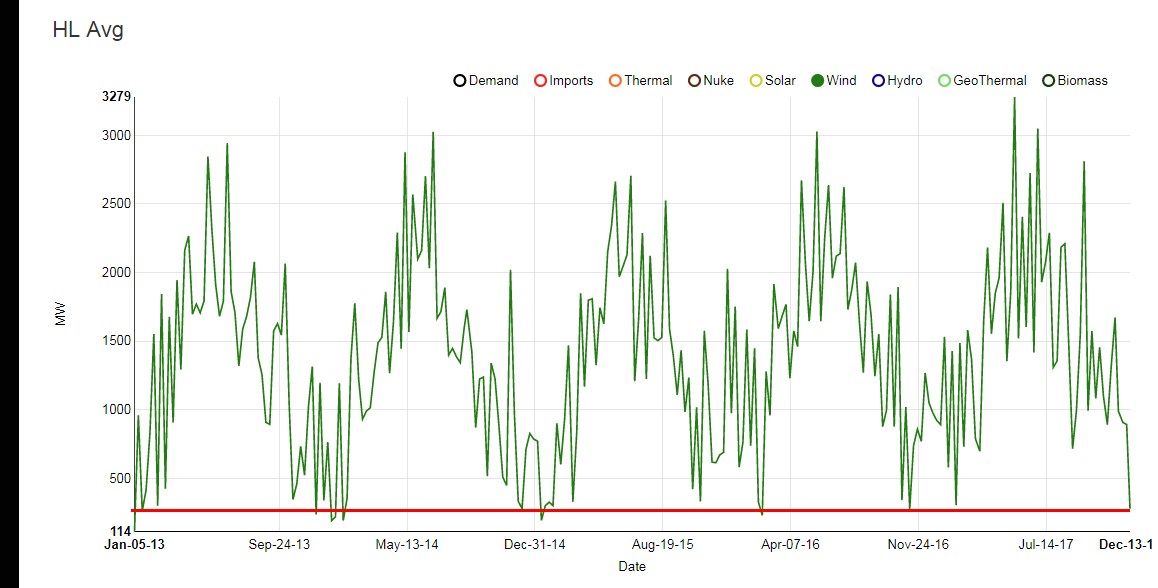 Those blades are not spinning in California and output nearly set a five year low. On a “Plant Factor” basis it was a five year low since there is so much more capacity today than in the past.

Energy production is off at the MidC, and it appears there is some maintenance occurring at Coulee; the plant’s available capacity is off 700 MWs. 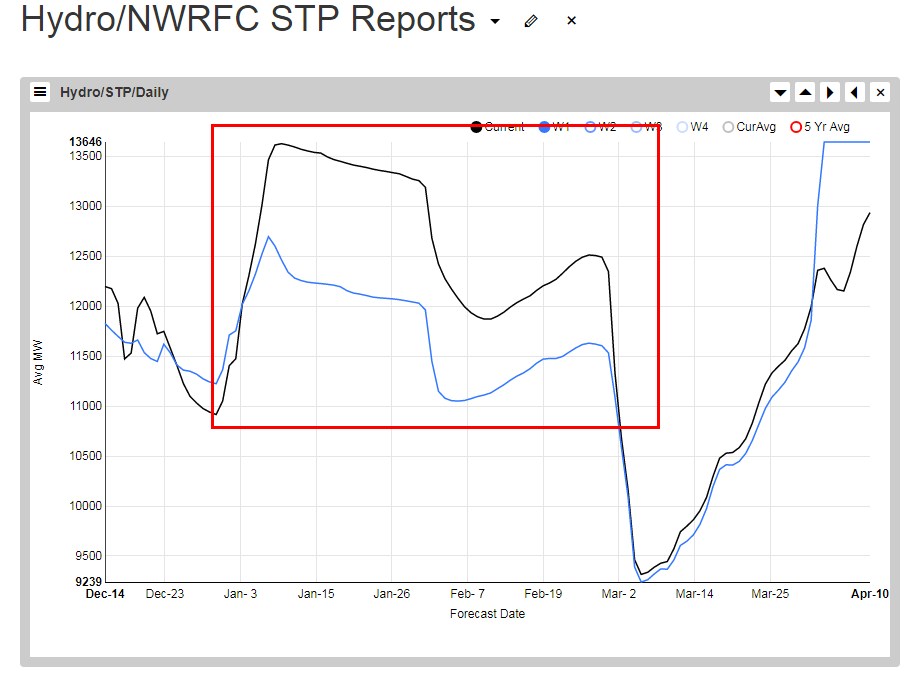 Monday’s STP has us scratching several body parts. Check out those rallies in the Jan-Feb, where did that come from? We thought it was dry and reservoirs were below average, yet our buddies in Portland are jacking flows like they are expecting biblical floods. WOW, where you getting those inputs, Portland buddies?

Both BC and Northwest reservoirs (aggregate) are below the five-year average; maybe the Portland buddies see some significant rain a coming?

Uuuhhh; we don’t. In fact, we see extreme dry for the balance of the month and are growing ever more bullish on the Q2/3 at MidC.

Our friends in California are not getting much in the way of rain, either.

All of which is driving the Snow Anomalies towards extreme lows. Remember those weeks in October, after it rained, and you were pounding the Q2 into oblivion? You might want to check your MTM on those trades; the Q2 is starting to look like a bitcoin to our tired eyes.

We love the Northwest’s outlook and not much else. More on this in a subsequent post.