It’s indisputable; we are in the throes of Winter, it’s mid-December; so true, except for the weather which is more like late October in the Northwest and mid-September in LA. Weather aside, the two significant fundamental events, which we are watching, are the dry Northwest (and California) and the Socal Gas Needles issue. The former will be somewhat washed away by the arrival of a new set of storms, and the latter may end as early as Christmas.

This was pulled from SCG’s outage page:

They list two Needles outages, one which has a return date of Dec 25; the other has no date. Both were updated on Friday. The one with the Christmas return shows a total outage of 800 MMCF which will completely obliterate all SCG supply issues, should it return on that date. NOTE – neither outage had a return date before last week.

Until the Needles interconnect is restored the spot gas market in Socal will remain very strong, as evidenced by the mid $5s that are now trading. We also took note of the collapse in prices at the Border, that rally (Border traded over PG&E Citygate last week) never made sense since the constraint was inside LA, not on the border. Relative spreads outside of SCG Citygate remain tight, driven by surging core gas demand:

Though it is relatively mild, temperature-wise, core demand in both the Northwest and PG&E’s service territory has soared over the last couple of weeks.

Not so at Socal Gas, the above plot compares week ending deliveries (total) across the last five years; we highlighted same week in previous years. Imagine the price if Socal was cold? 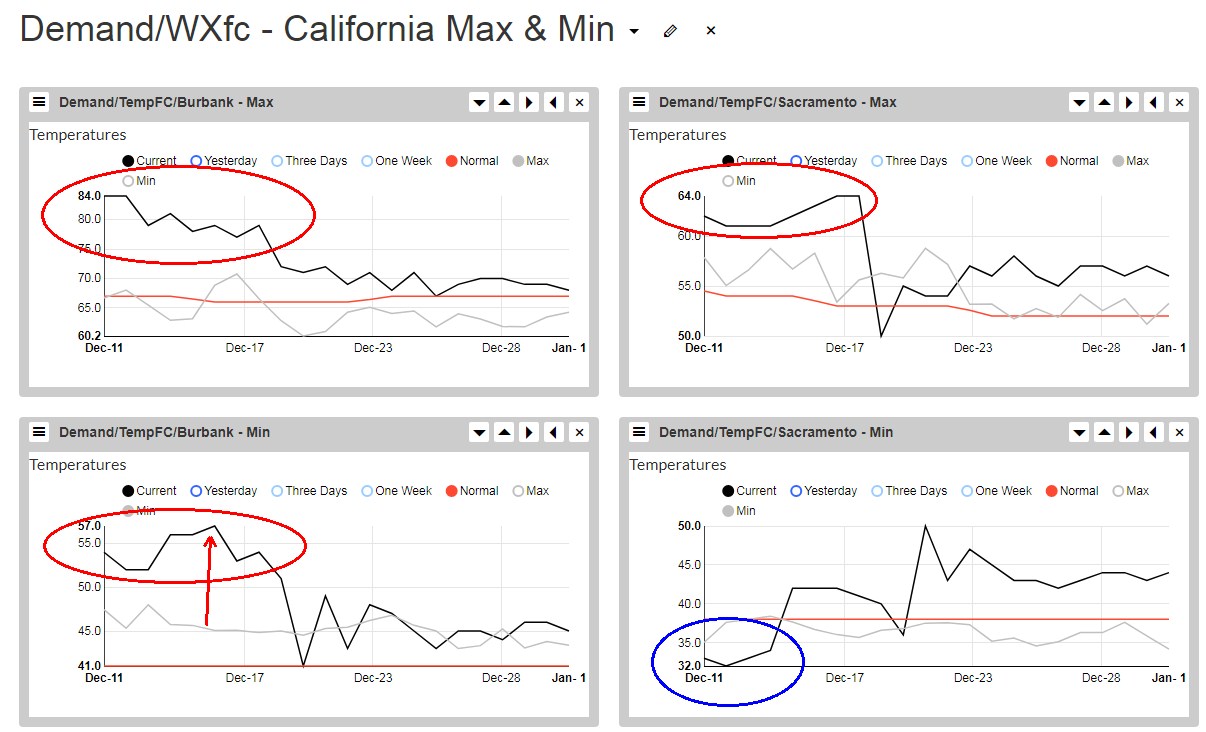 Alas, it isn’t cold; in fact, it is scorching. LA is boasting mid-80s in mid-December. Night time temperature is cold in Sacramento which is driving much of PG&E’s core demand rally, but the warm anomalies in LA have dampened our enthusiasm for anything Socal. 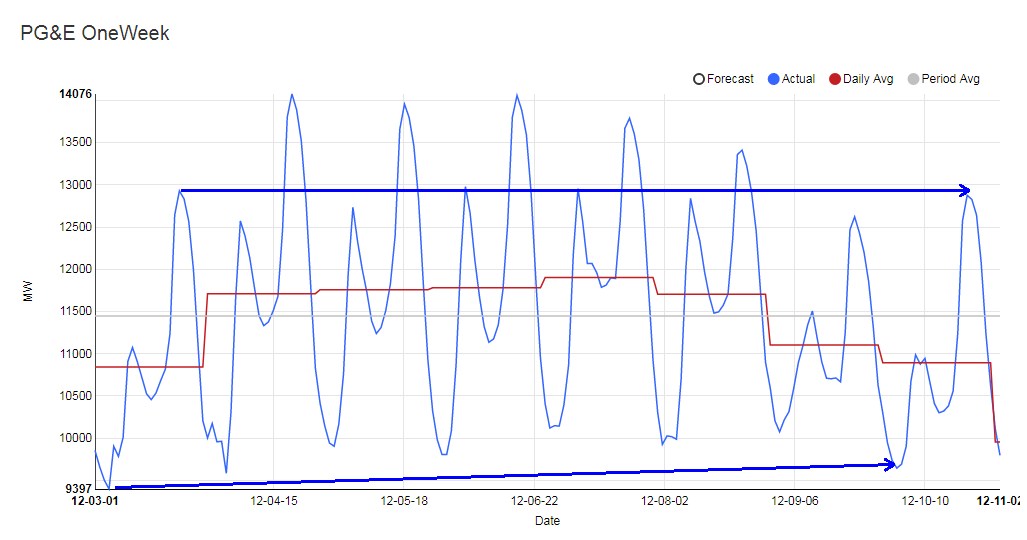 Daytime highs in Northern California are above average, nighttime lows are below, and that is precisely what we see happening with PG&E’s loads. Evening peak is flat, week on week, but the early morning lows have rallied. 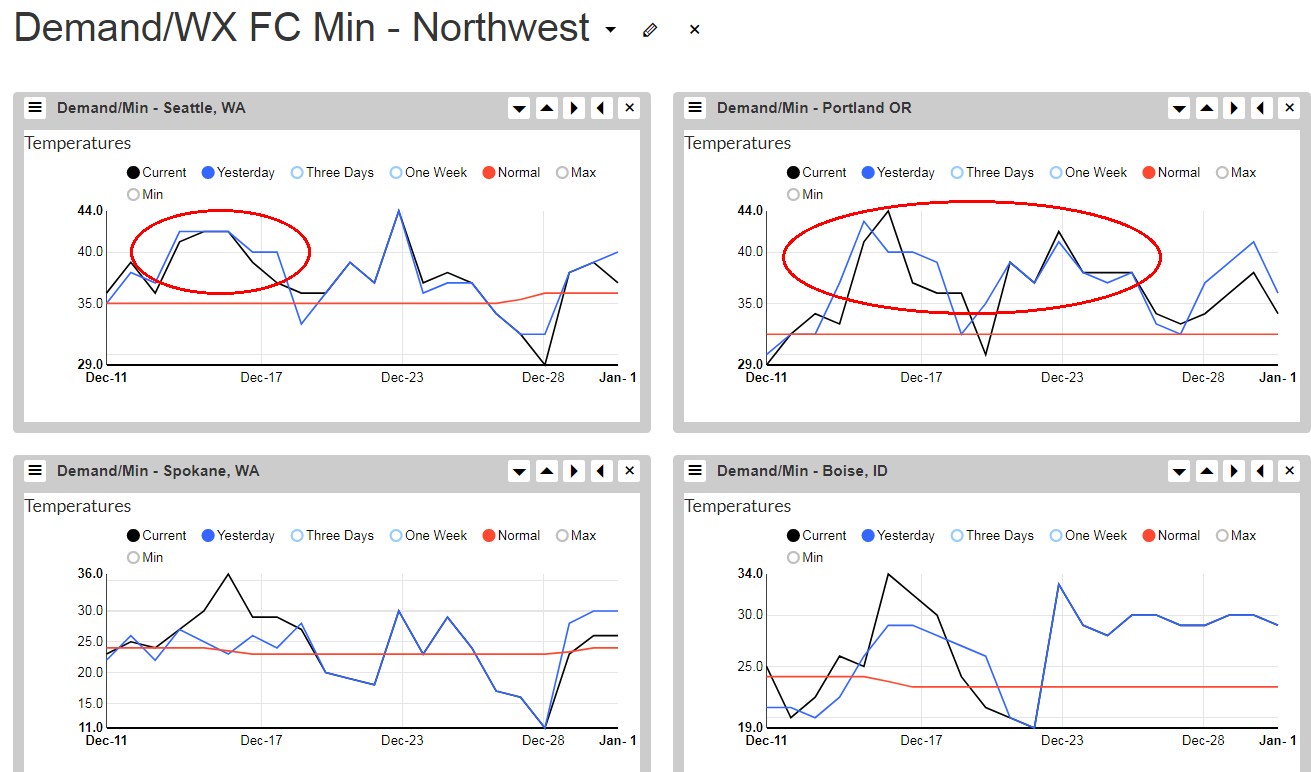 Similar story in the Northwest; cold nights and warm days with no end to that pattern in the next fourteen days. If you had hoped to retire off of your BOM Mid-C length, you may want to revisit those plans. 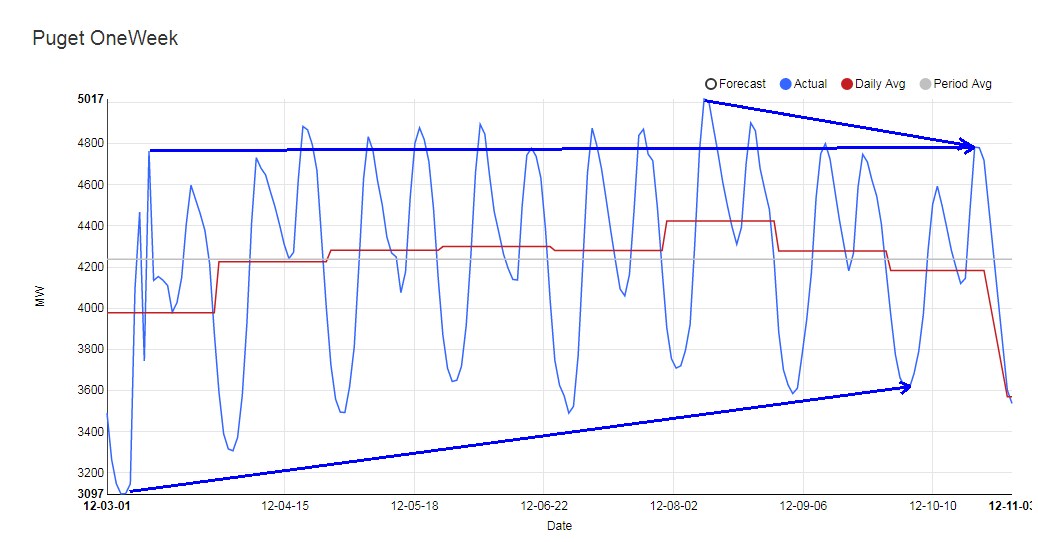 Puget’s loads are even more dramatic than PG&E’s; the minimum loads have soared, the peak is flat.

The WECC interior is bearish, too. Phoenix will enjoy a string of above average days from now until January, even Salt Lake and Denver are warm. Bearish. 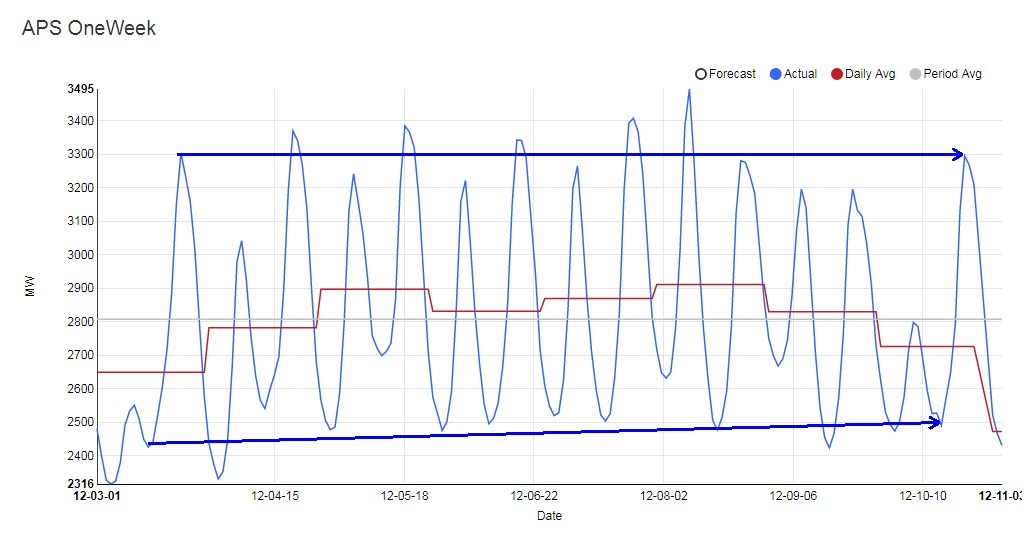 Arizona Public Service’s loads are just sideways, though the nighttime troughs have rallied a bit.

Realized temperatures confirm all of the above. 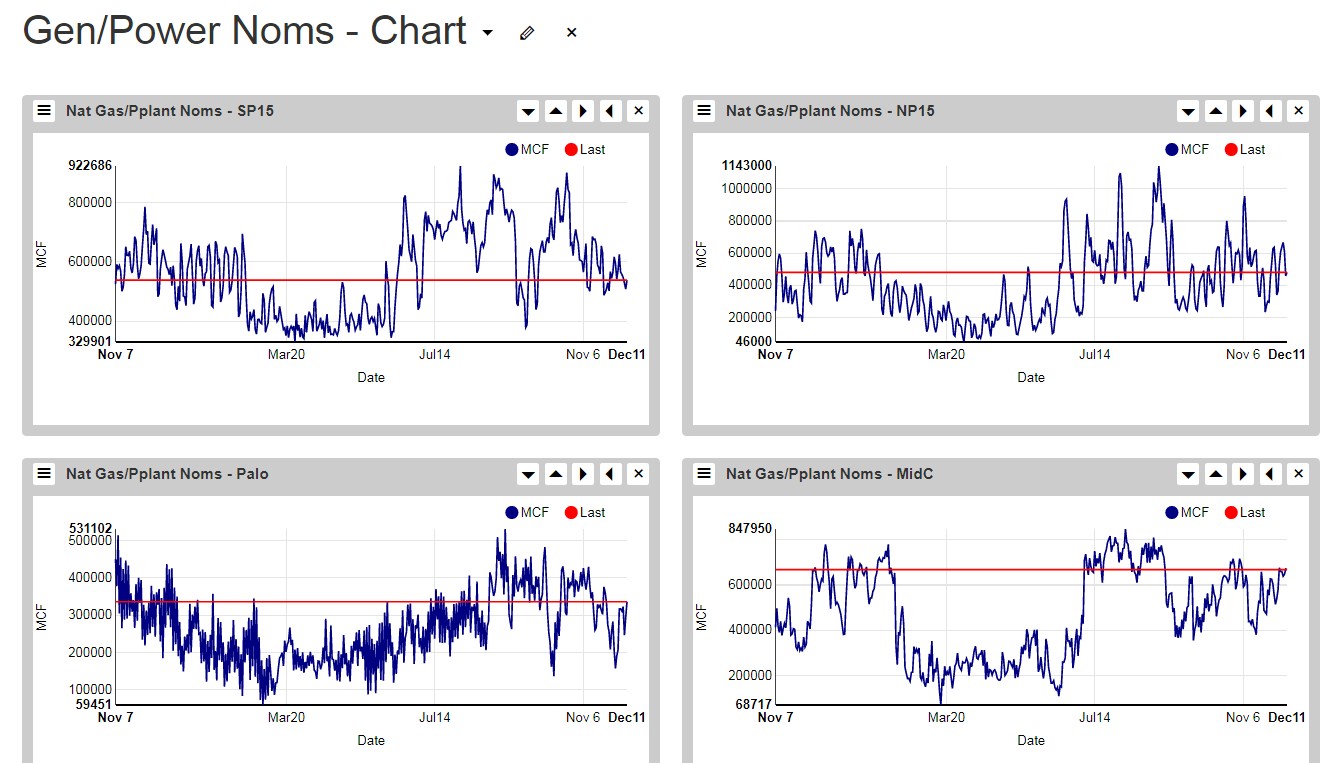 Gas nominations are mostly sideways across the WECC with SP’s the lowest, relative to historical. Why wouldn’t be? The heat rates in SP are abysmal:

That makes sense, why run $5.00 gas through a turbine when you can generate outside of SP and send via transmission. What is most interesting is how little energy is flowing into SP:

The DC is full, but neither Path 26 nor the Palo line are even close to full. In fact, there were a few hours where energy flowed north out of ZP. While on the subject of Transmission, look at the aggressive selling on the Northern Intertie, that is a 2000 MW swing in nearly every hour. 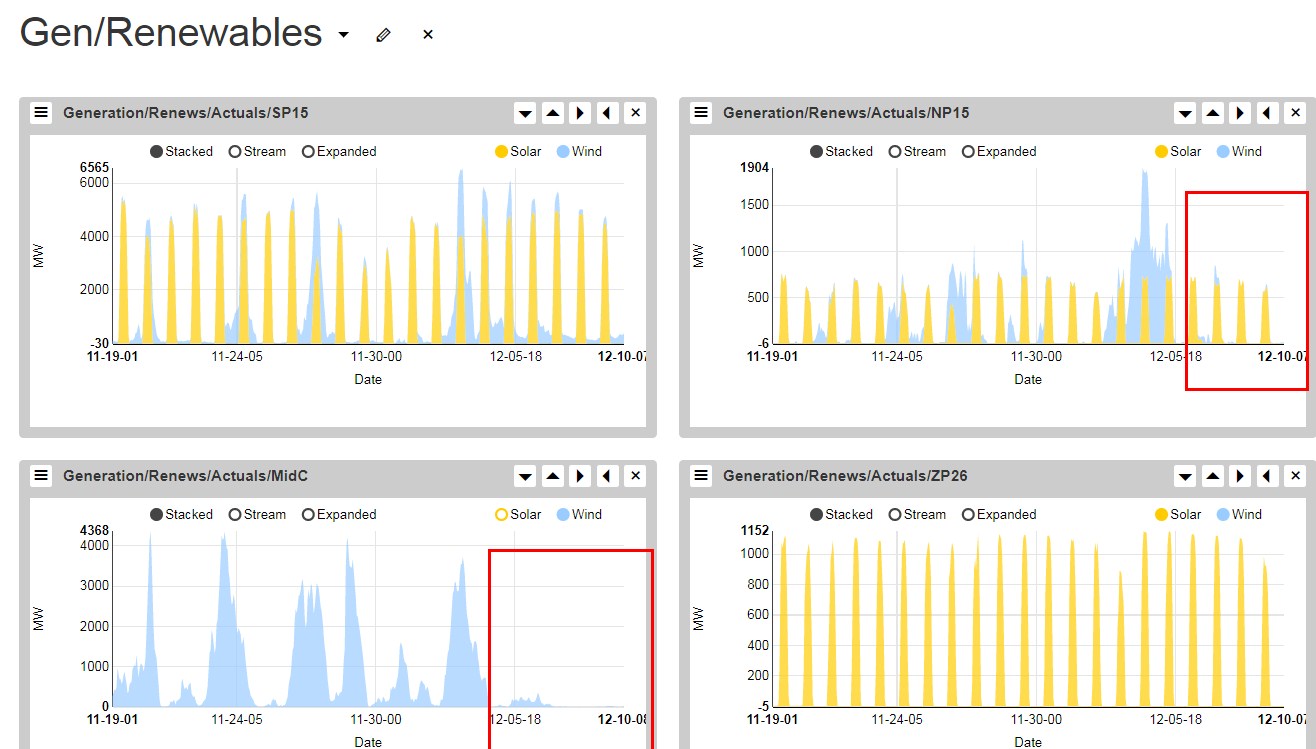 The weekend was bullish for the dearth of wind energy; no one generated anything, which might explain some of the aggressive Canadian selling.

We mentioned, at the top, one of the critical fundamentals in play today was the dry weather in the Northwest. This has wreaked havoc on our Water Supply forecasts:

Now Ansergy is forecasting both GCL and TDA in the low 90s; even the laggard NWRFC is starting to back down their overly exuberant forecasts. Our forecasts at Ice Harbor, compared to the feds, caught our eye. Perhaps we are too low? 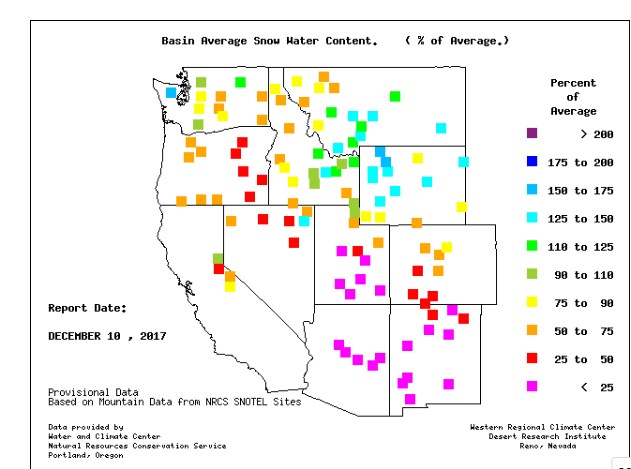 Not so fast, aside from a couple of stations in southeastern Idaho, the Snake is well below average. We struggle to pull 105% of normal on the Snake out of that picture.

The dry snap is over, though:

Our 21-day precip outlook suggests two systems will move through the Northwest during BOM, but neither muster that much precip; the ten day outlook is about 30% of normal. This is setting up for a minimal draft in the first flood control release around Jan 10.  Don’t expect March to get pounded like last year, nor Feb, should the dry weather hold. No drafts, or minimal drafts, also means little refill in May and June.

California isn’t just dry; it’s expected precipitation for the remainder of the month is non-existent as in not a drop of rain for the Golden State. Bad for the ski resorts, bad for the fire abatement, but slightly bullish for sping and summer power markets.

Total hydro energy is starting to back down after the storm-driven surges of the last couple of weeks. With the dry weather coming we’d expect the fall in production to accelerate as the state husband’s one of its scarcest resources.

Coulee production is up as BPA generates into the cold nighttime temperatures; without rallying inflows, they were forced to pull the reservoir down.

The storms of late have now worked their way through the Clark Fork, and that river system is seeing a rapid decline in flows.

Loads aren’t going to drive a rally; dry weather will keep upward pressure on Spring and Summer prices in the Northwest. We’ll explore some hedging/trading opportunities across the WECC in a post to follow shortly.