A few trades caught our eye, see below: 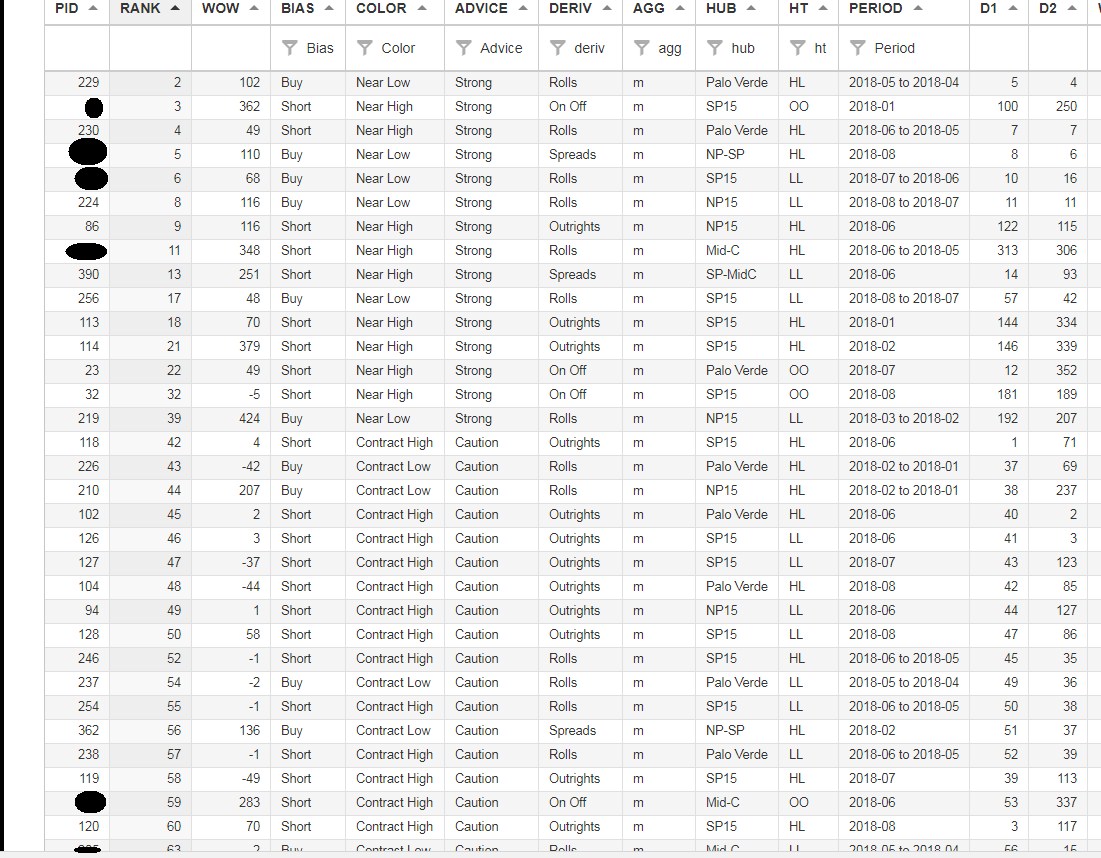 The above table is sourced from our APT product, sorted ascending on Rank. The highlighted products are discussed below, though we recommend you review all of these. 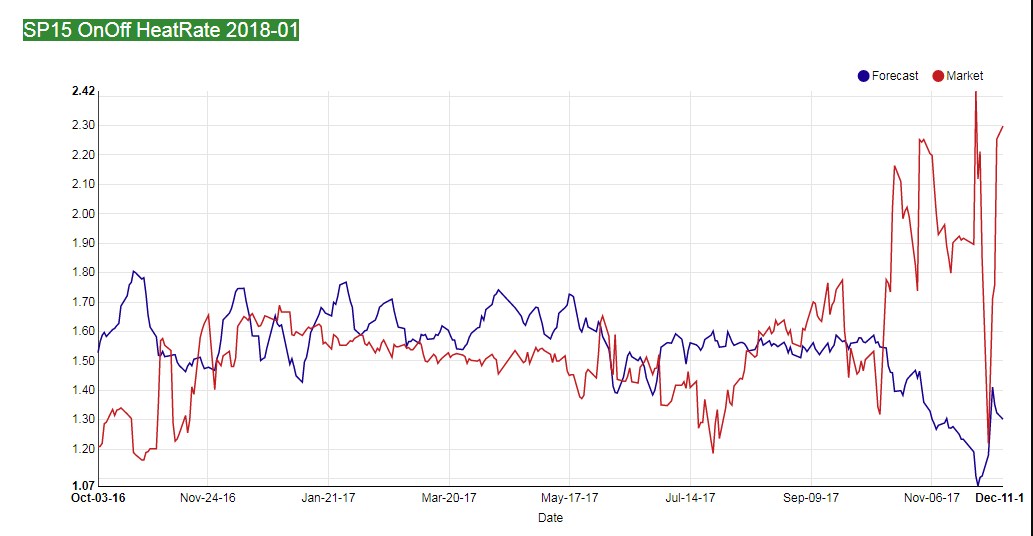 The Jan SP On|Off is officially the “bitcoin” of the WECC. You like volatility, look no further. What happens if TWP Needles goes back into service? The heat rate will collapse, that is what. 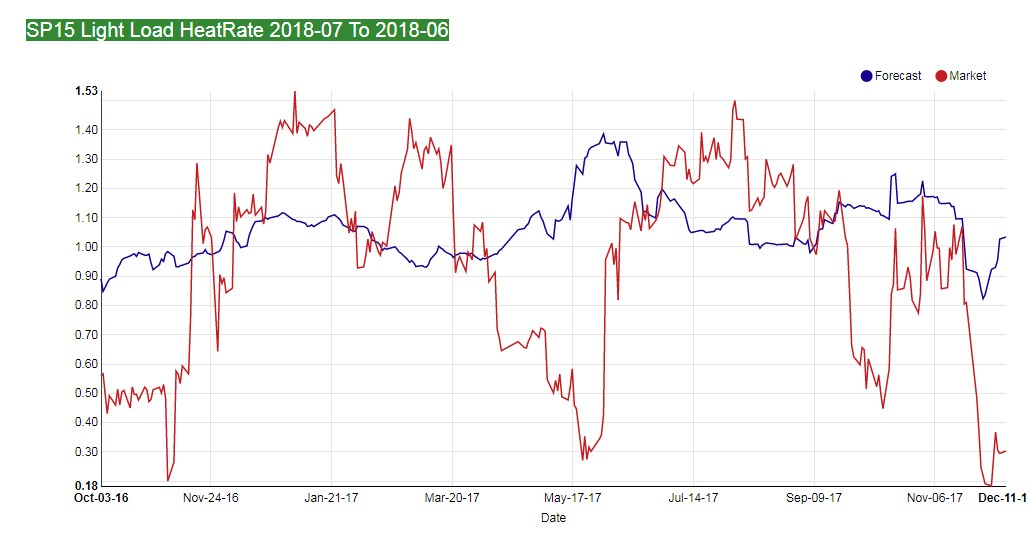 When could you ever own July SP cheaper than June? Today, almost, and we’d hold a sizeable chunk of it. Socal is slow to heat up, July loads average several thousand MWs higher than June. Last year was the exception, June was extremely hot, but we’d fade 2-3 std deviation events all day long. 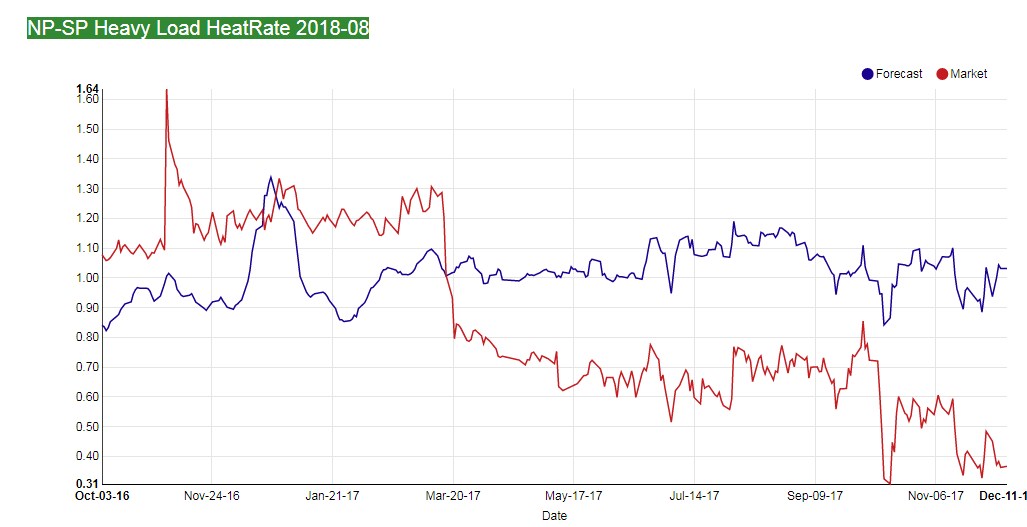 Another event we’d fade is massive NP hydro energy in August of 2018. Won’t happen in this water year, yet the market is pricing August like its deja vu all over again. Mistake. 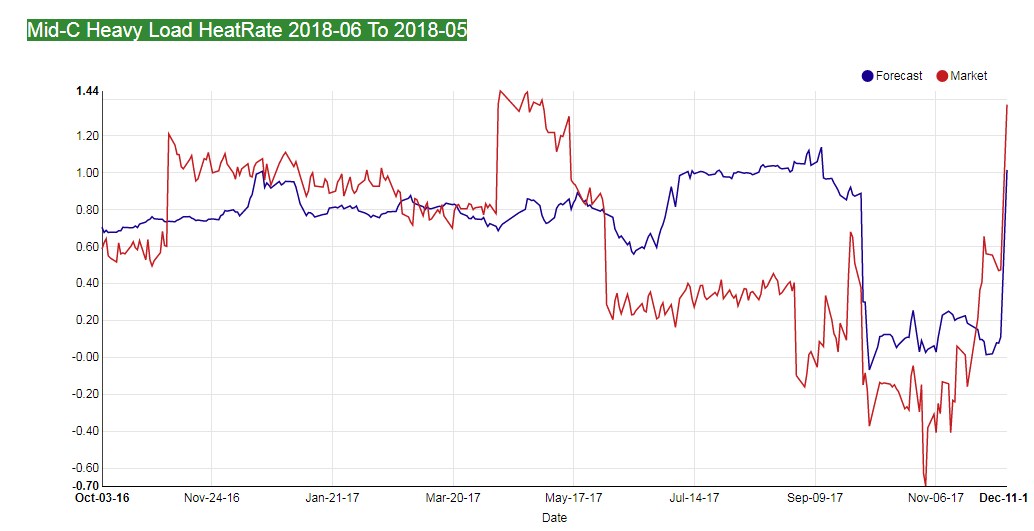 Another bitcoin proxy, this is the June|May MidC onpeak roll. Despite some drying out, we still think it is too early to play the “month” game. But, if we were to play it, we’d do that from the fade side and pounce on anomalies. This isn’t an anomaly; the market is back to its one year average; the anomaly was two months ago when you could have owned the May for less than June. In a dry year, there is little refill (because the reservoirs were little drafted) but the corollary to that is there is little water. What we don’t know is when that water will come down – will it be in April, May, or June? In low snowpack years it won’t come down in July, there won’t be any snow to melt in that month. We’d watch this, if it keeps rallying, we’d sell. 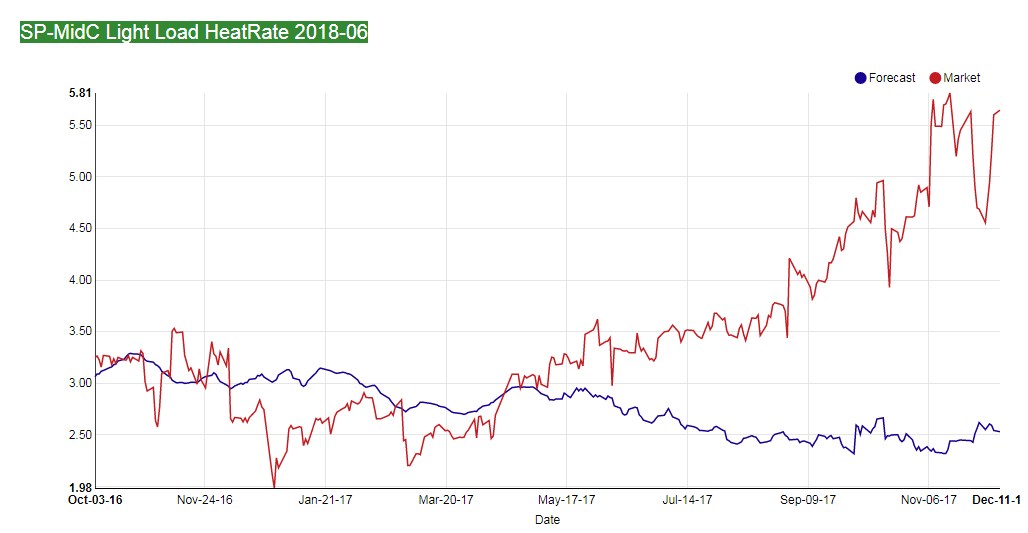 Fix Needles, and suddenly SP looks like a turd. Holding some shorts against that event is not a bad play, and this one is a good one place to start. Dry year, MidC could see a tight June; SP could be cool, temperature wise. It is trading at the contract high with no fundamental reasons to support it – fade. 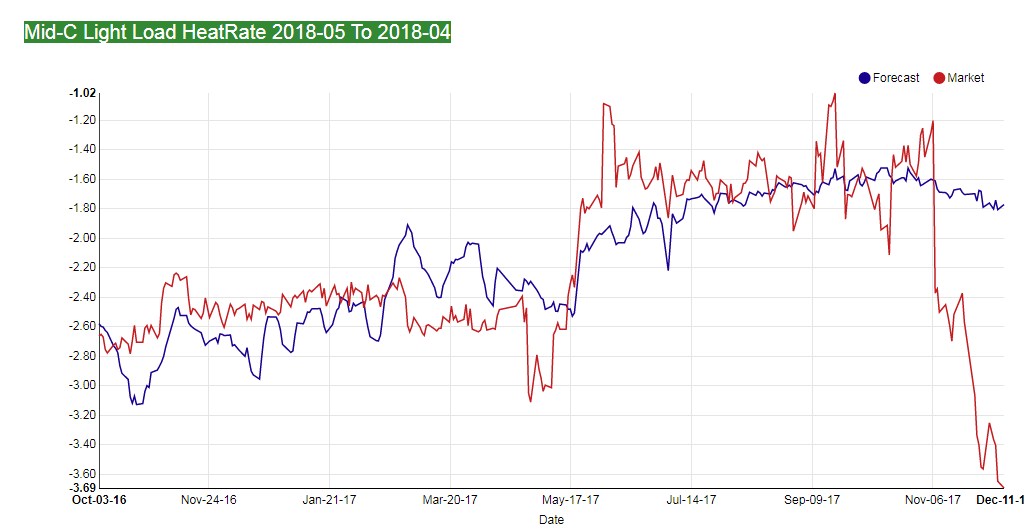 Oh dear, Market hates the May and loves the April a long time. Not sure we’re ready to jump on that train, we’d prefer to derail the train by fading the move. Fundamentally, it was correct to start owning April, but we think this is too much. Bear in mind, no one knows when the melt will crest, but if it happens during April, while Coulee is pulled to probably low 1260s, that month could be a “meltdown.” Fade the extreme moves; this is one of them. 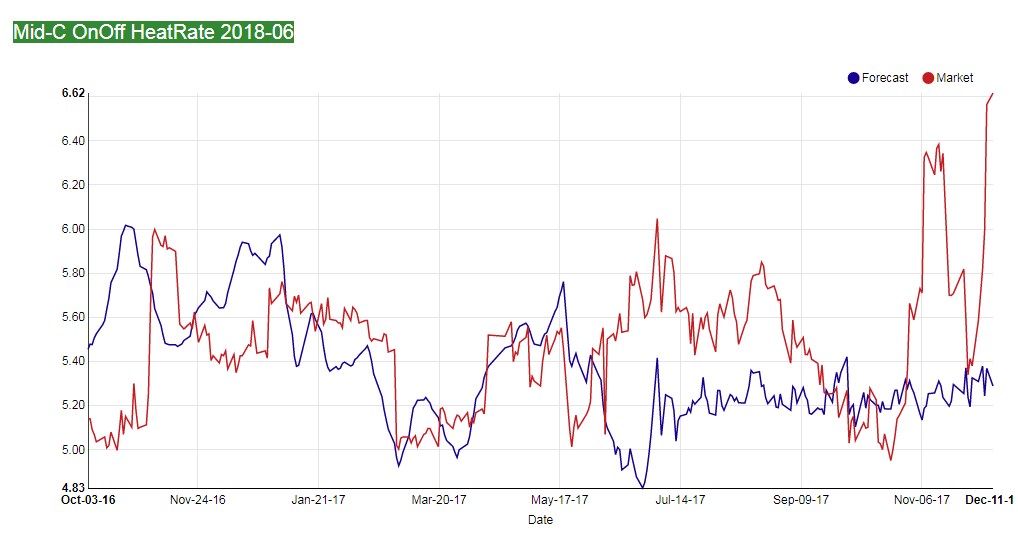 Another odd mark, and more volatility, in the June On|Off. We don’t necessarily disagree with owning June on peak, but if it is dry BPA will have shaping bullets, so there is no reason for a contract high this early.

Sometimes it is fun to look at the worst trades, the ones that have dropped the furthest in ranks. If you are a “trend is your friend” kind of gal, this is where you want to be dining, at the bottom of the APT trash can. It is also the “I told you so” group as many of these trades were the darlings of recent weeks. 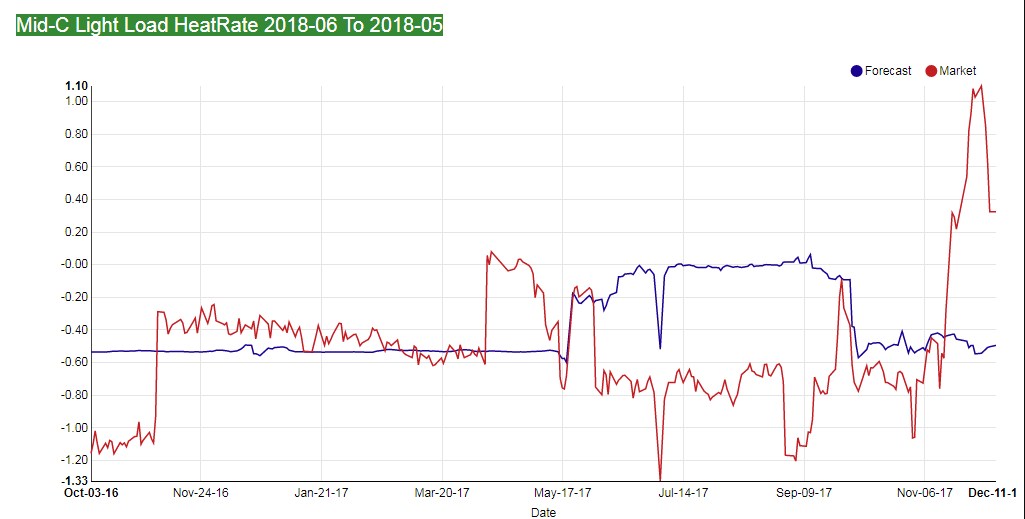 We pointed this out in an earlier post, the June-May MidC offpeak;  the derivative hit a contract high then fell 1000 btus and now is reasonably priced. 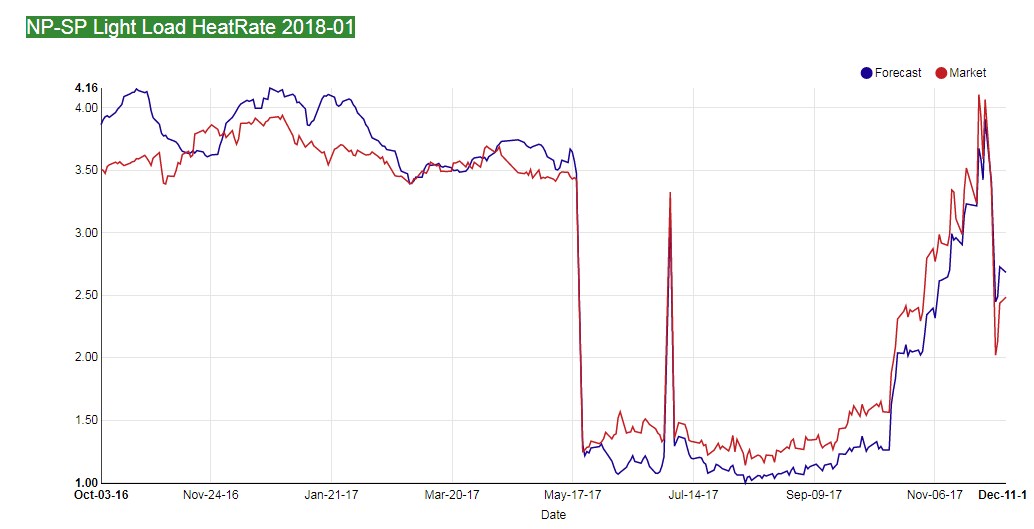 Note how closely the forecast follows the market, not because we game our forecast, but because all of this volatility is driven by the Jan Socal Gas contract. Fix Needles, and the volatility here will disappear like the air in a popped balloon. 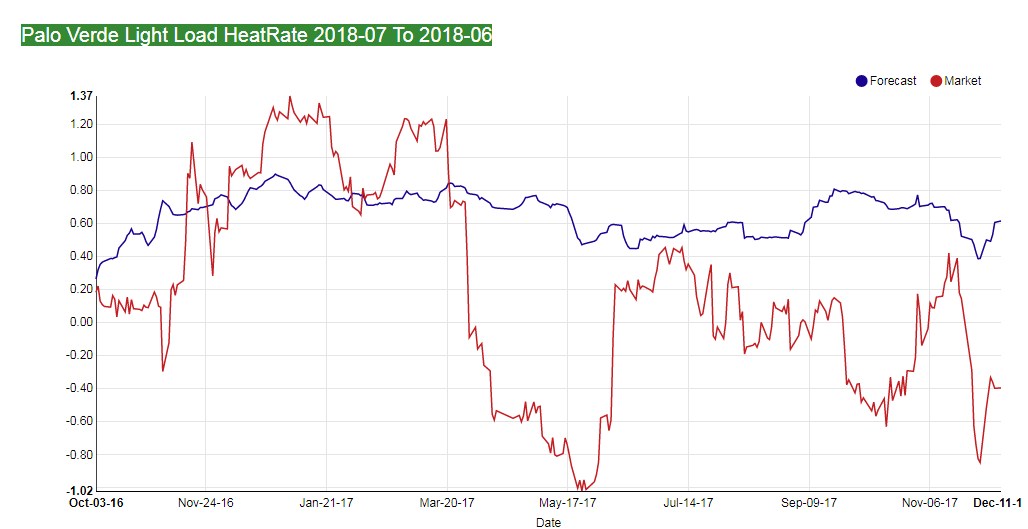 One of our stars was a July-June roll (see above); this too is the same roll but at Palo.  At one point you could have owned July cheaper than June, that was a mistake, now you must pay for that right. There still is juice on the upside, we think. 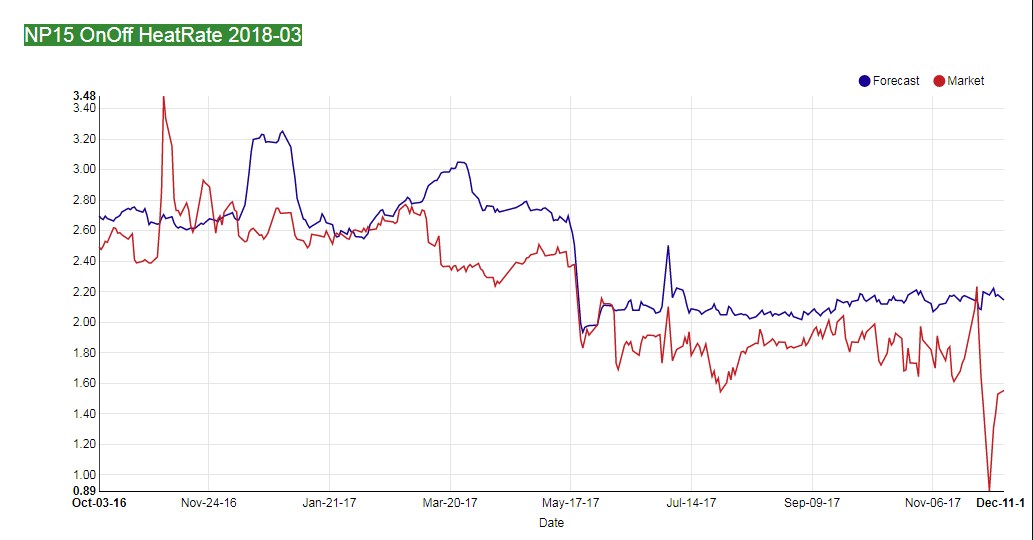 The recent volatility in the March On|Off was not driven by gas, note the forecast didn’t budge. This got stupid cheap; now it’s just cheap. 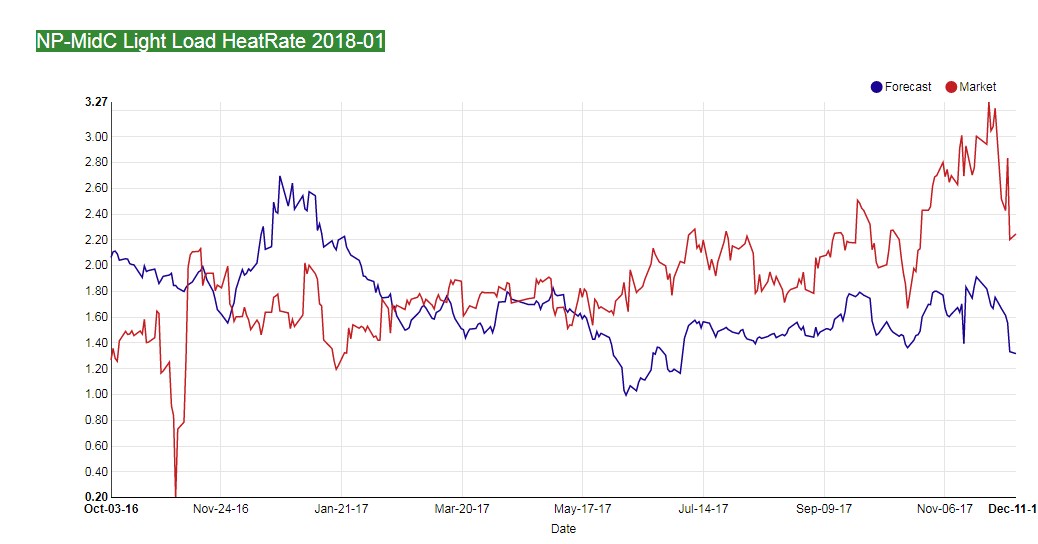 The Prompt NP|MidC spread is collapsing, perhaps off of a drying Northwest. Where it once was a nice “own” now it isn’t worthy of anyone’s attention – unless the MidC grows very cold, which it isn’t.