I hope everyone enjoyed the holiday; not a lot has changed from where we left things going out last week, but there are a few items to discuss, beginning with cash.

Leading that list, the discussion items, is the surprising resiliency of ISO heat rates; now they are trading 13k, about a level you’d expect with 15,000 MW more demand. Of course, it is not about “Demand,” it is all about “Net Demand”; Net Demand sets the placement in the stack and at 13k cleared heat rates most of the ISO gas units will be running — or will they? 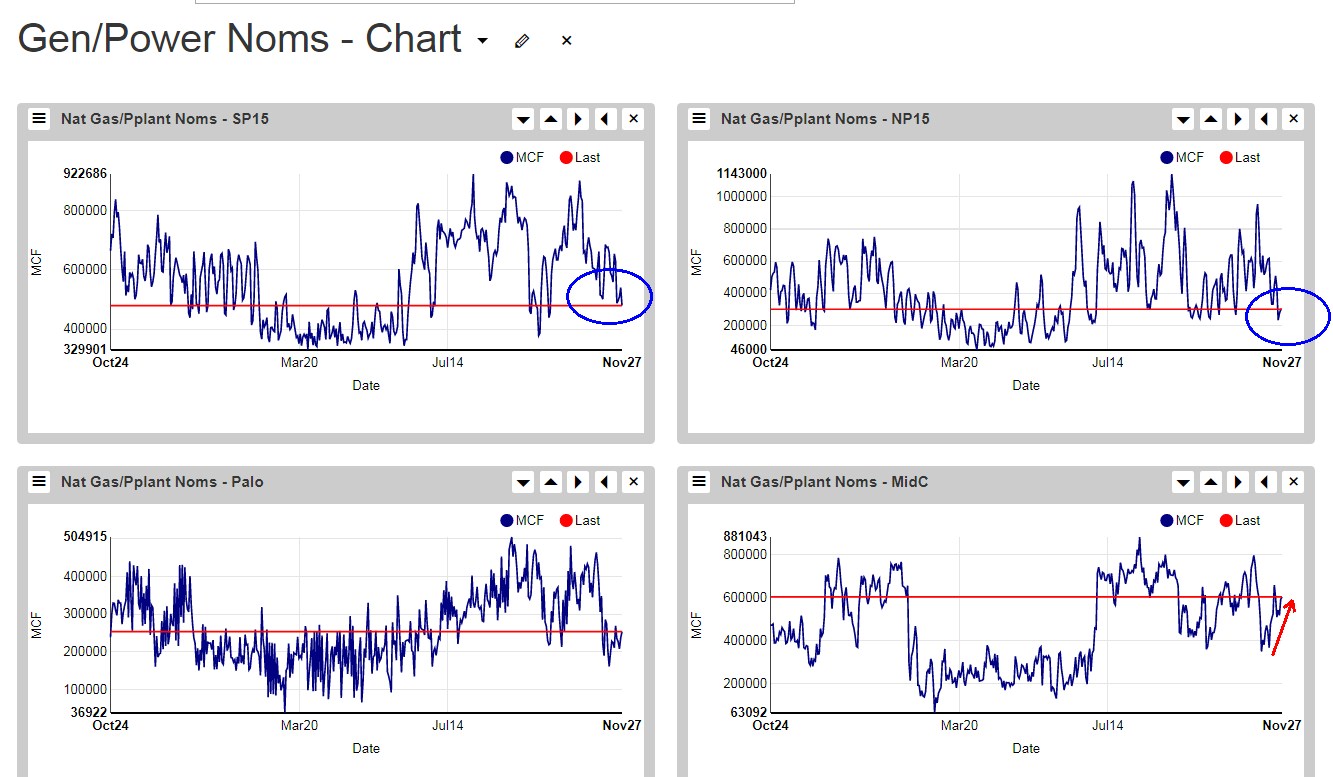 Not according to the gas being nominated; both NP and SP are at the calendar year lows.  The only hub that shows signs of life, regarding noms, is the Mid-C, the rest are amidst the winter doldrums. But cleared prices don’t reflect that – go figure.

Perhaps there is the “linger” effect on markets; last week’s heat, though mostly gone, has left a lingering bullish overtone, though the DA LMPs are off, and so is gas. It seems SCG swings a dollar a day — $4.00 to $3.00 to $4.00 — now it is back to $3.00. Also, note the crash in the Northwest, currently trading  $2.36, all the while core gas demand is up and so is electric gas demand.

Same DA chart, just last two days. The Southwest is congesting in HE17-21, but the Northwest is showing very little congestion. 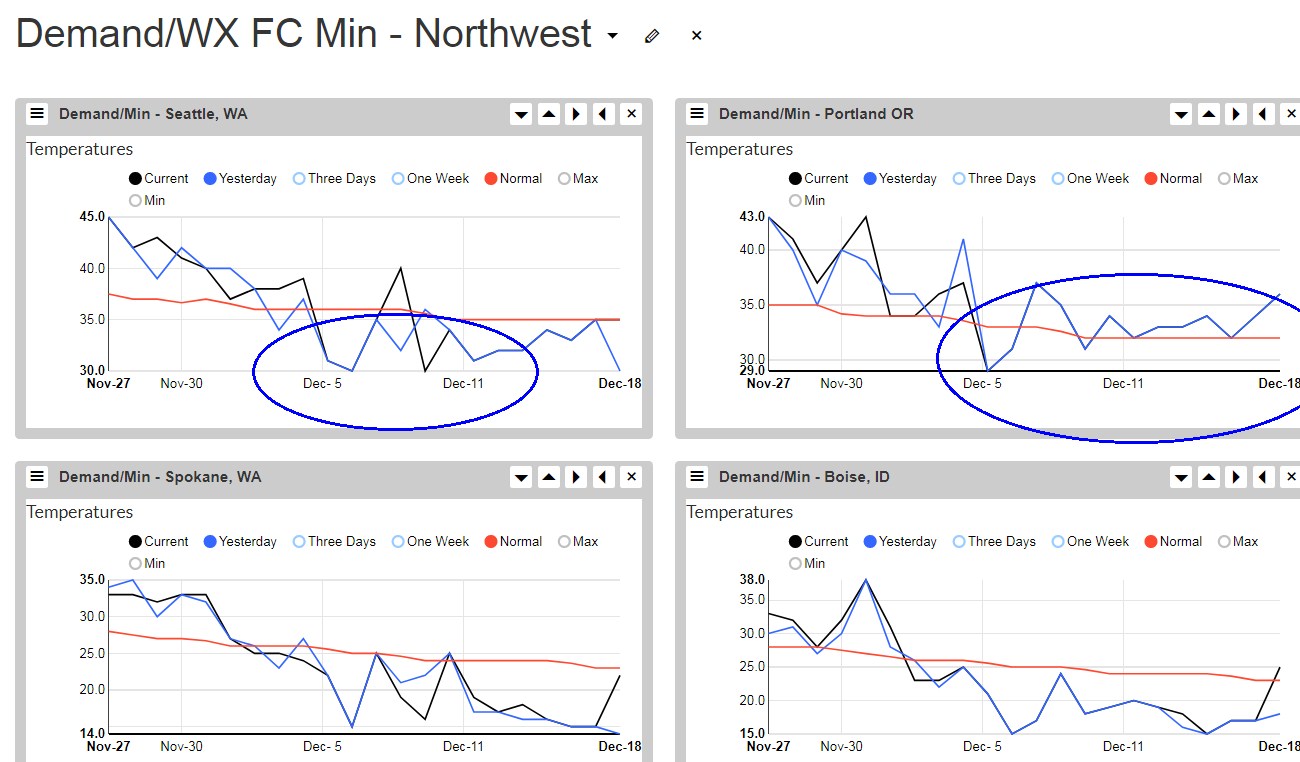 The long-awaited cold weather is becoming increasingly likely in the Northwest; now we see below average inside the ten-day. Expect a surge in demand offset by a rise in regulated hydro to meet that demand.

Perhaps this is what the NWRFC sees and explains their 10-day: 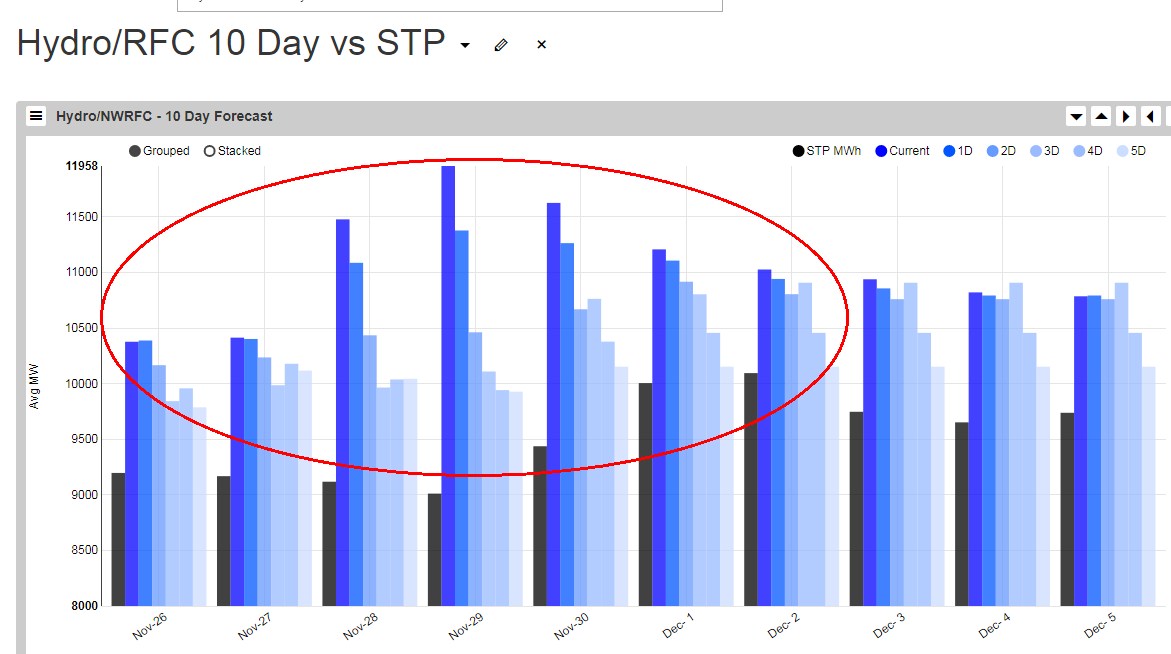 Although we think not, since the dates of the RFC’s hydro surge don’t match up with the cold weather. 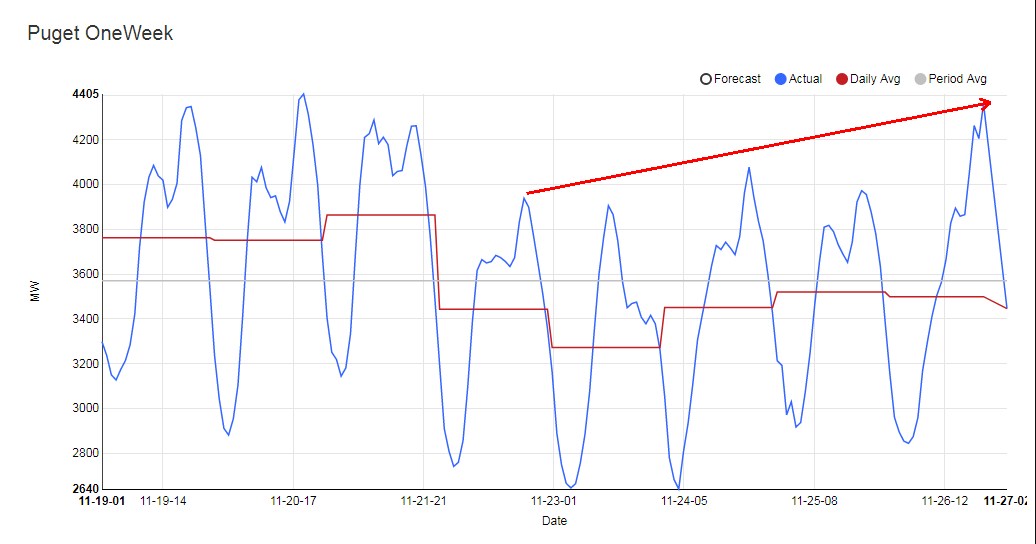 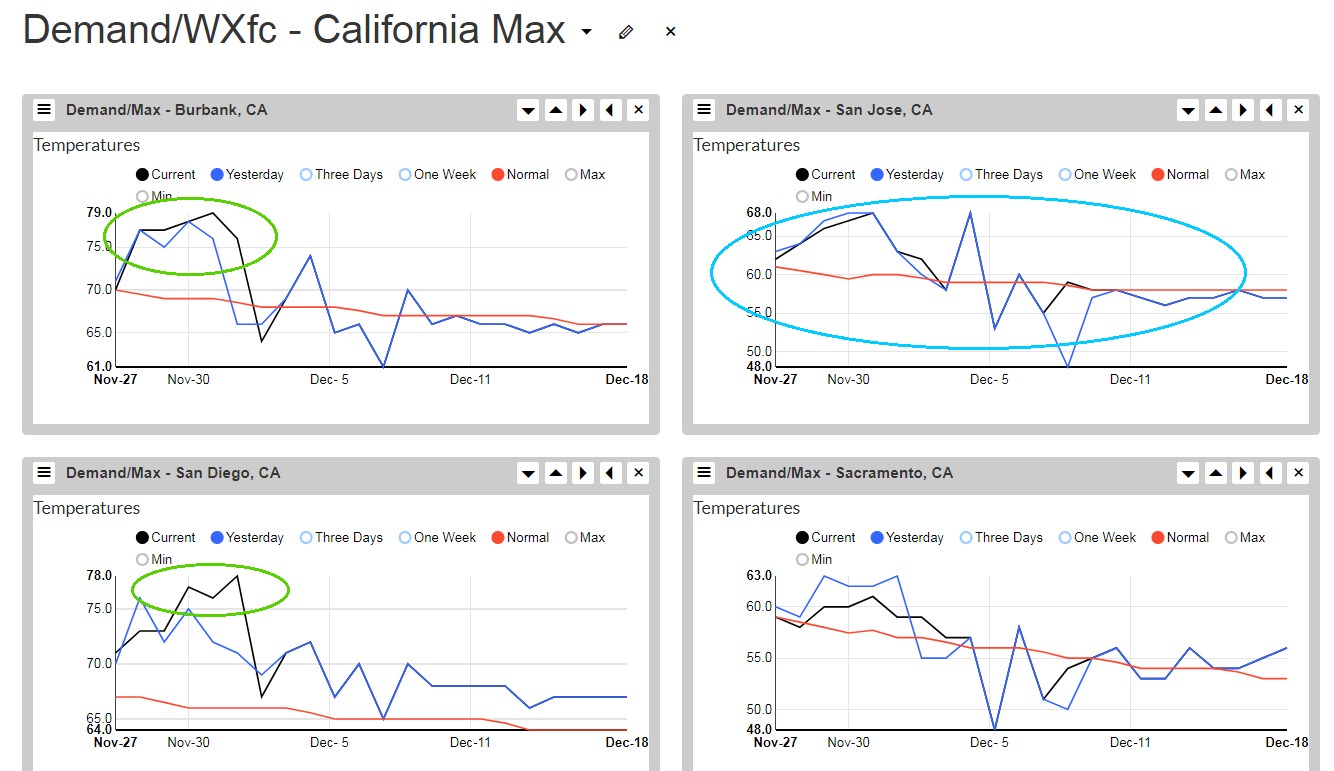 California is a mixed bag, mostly bearish, though the LA heat is sticking around for a few more days, but its just not that warm and is more bearish than anything else. Maybe it is time to look at Min Temps? 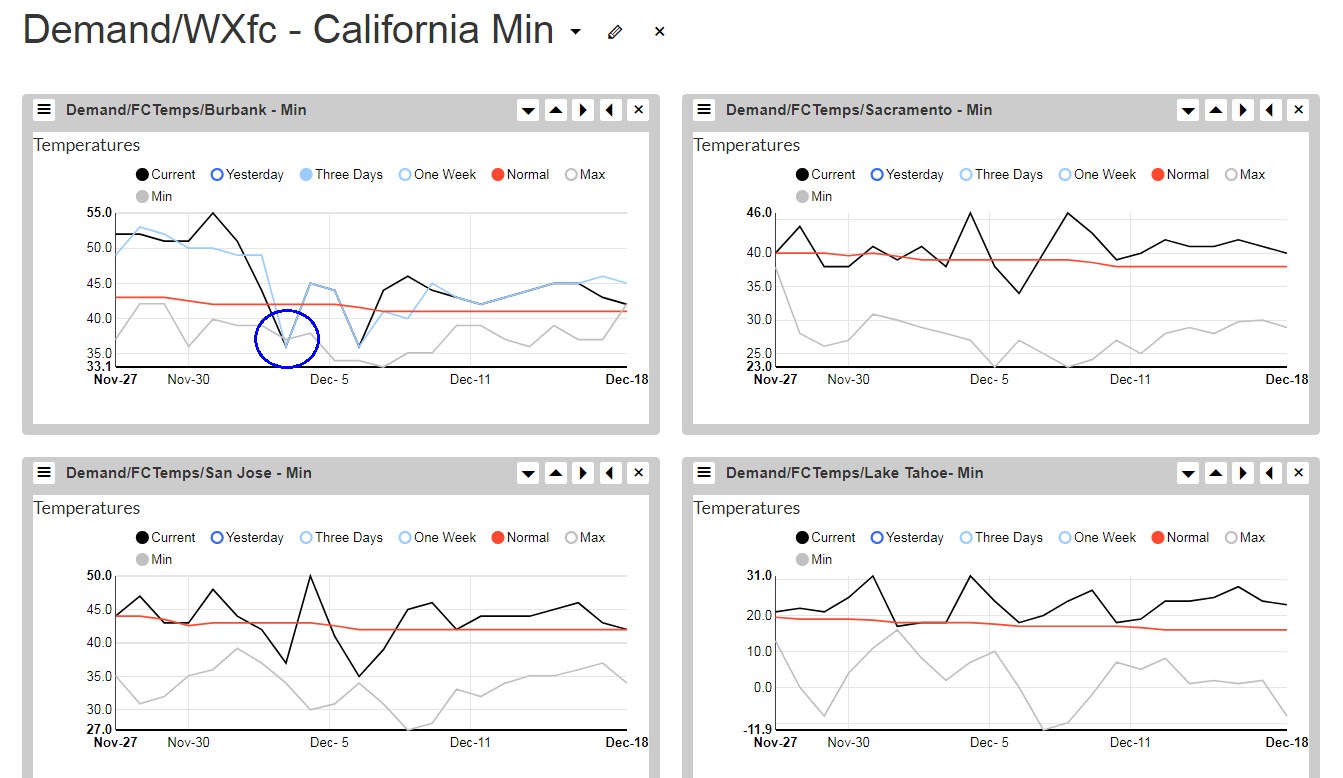 Those are more exciting plots; Burbank will flirt with a ten-year low this weekend. Most everyone fears issues inside SCG and nothing will spike gas demand more than core load; right now there is no demand:

The above plots core gas demand inside SCG (res, com, ind) and it can’t get much lower than today. Next week should see a significant spike. 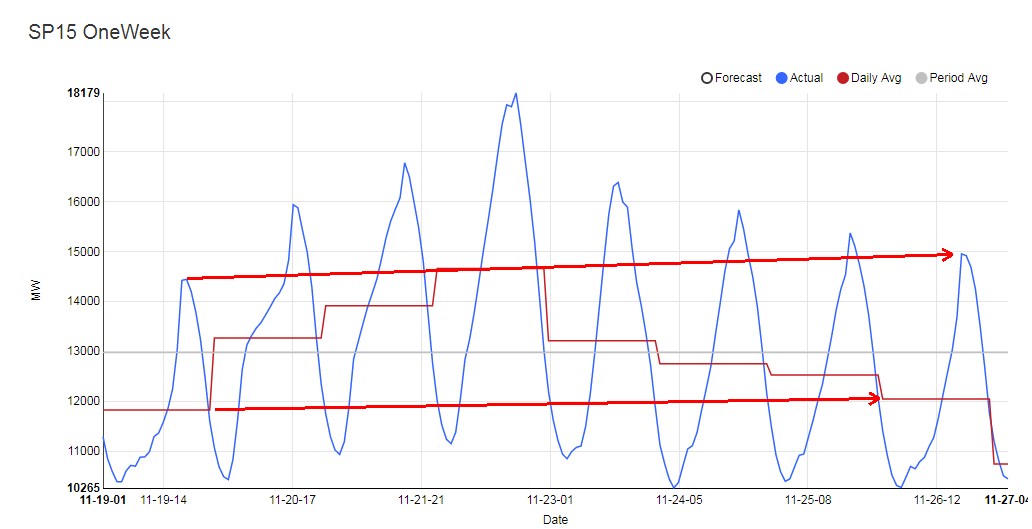 The week on week loads are up, slightly, but down from last week’s heat-driven highs on Tuesday.

This is a new dashboard, Interior Lows, as we do not see hot enough weather to push the air conditioners. Check out the below normals in the Interior later in the week all of which will tighten up the WECC. 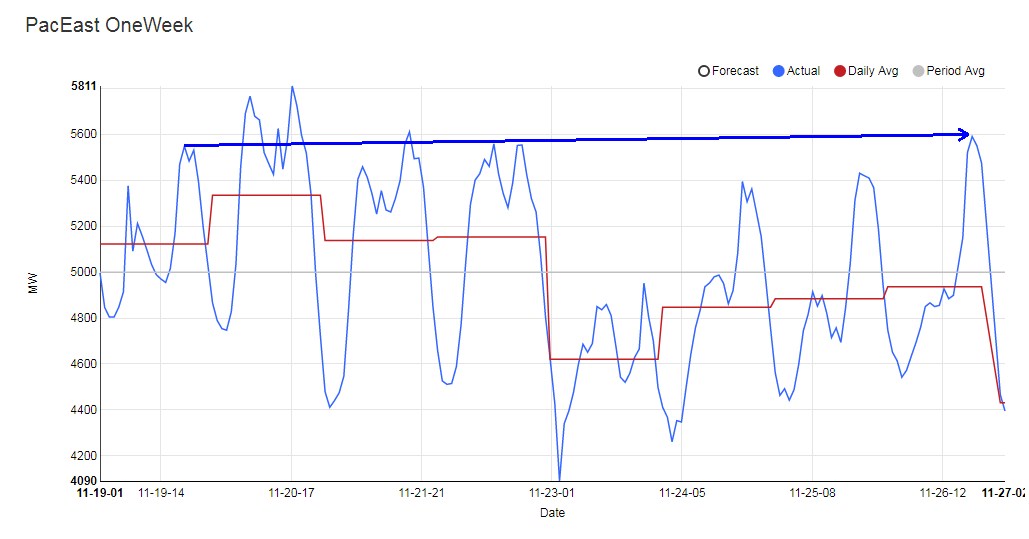 Pac’s Utah loads are sideways, week on week, but up from the holiday lows. 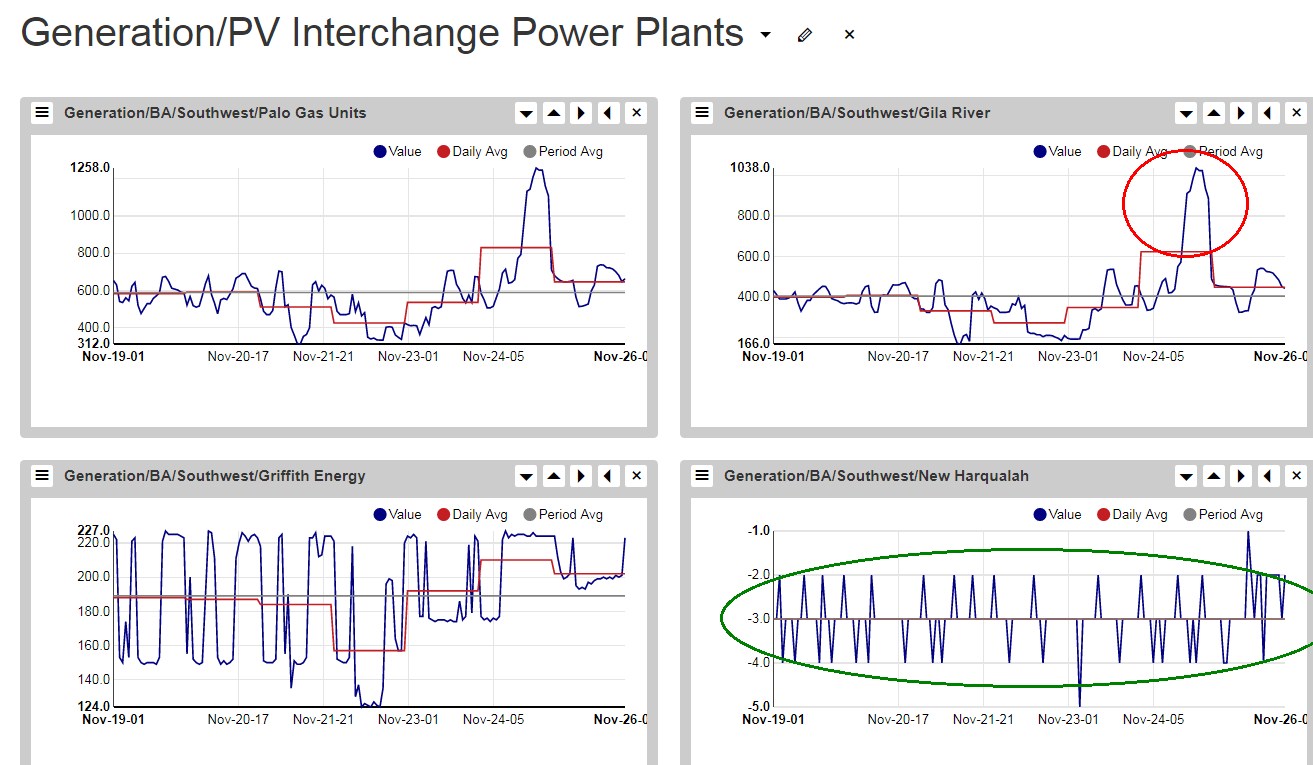 Gila River spiked its output on Saturday, not sure what drove that, while New Harqualah is offline. Meanwhile, all the WECC nukes are running at 100%. 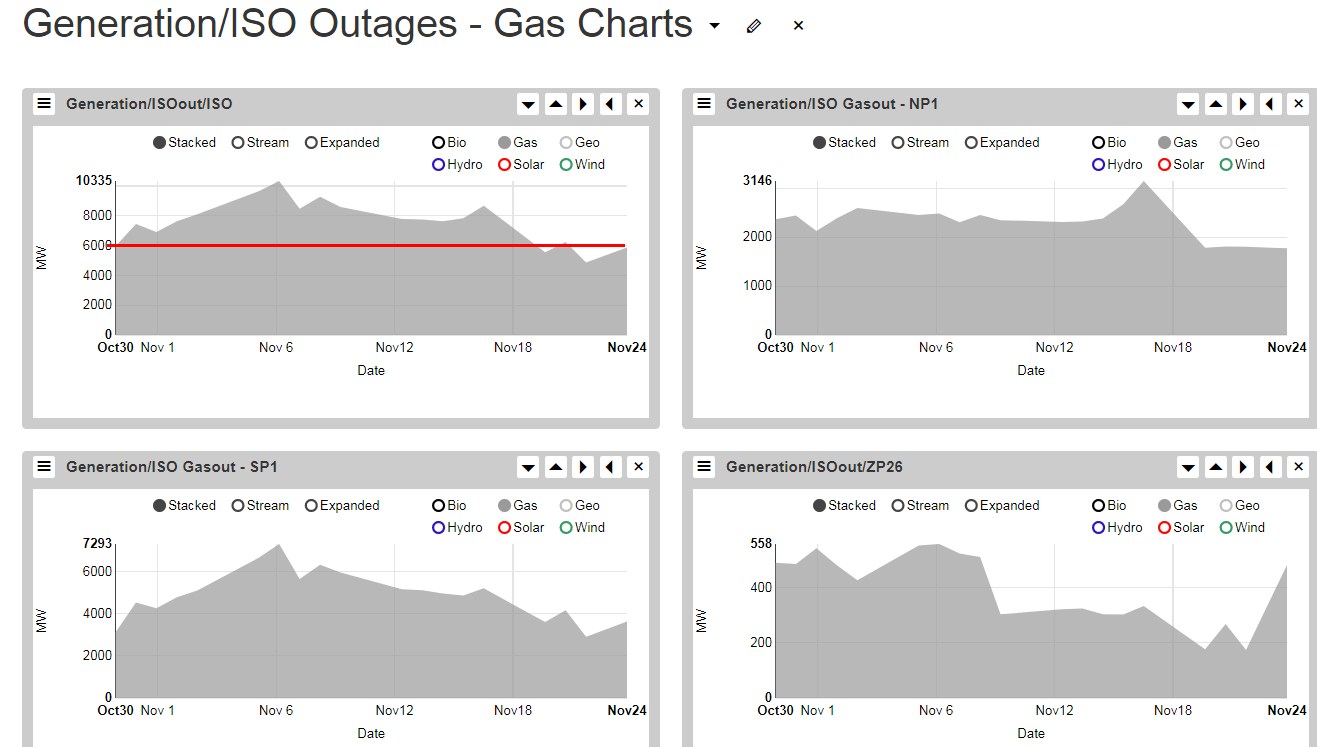 ISO outages rallied somewhat, all of that took place inside ZP26. 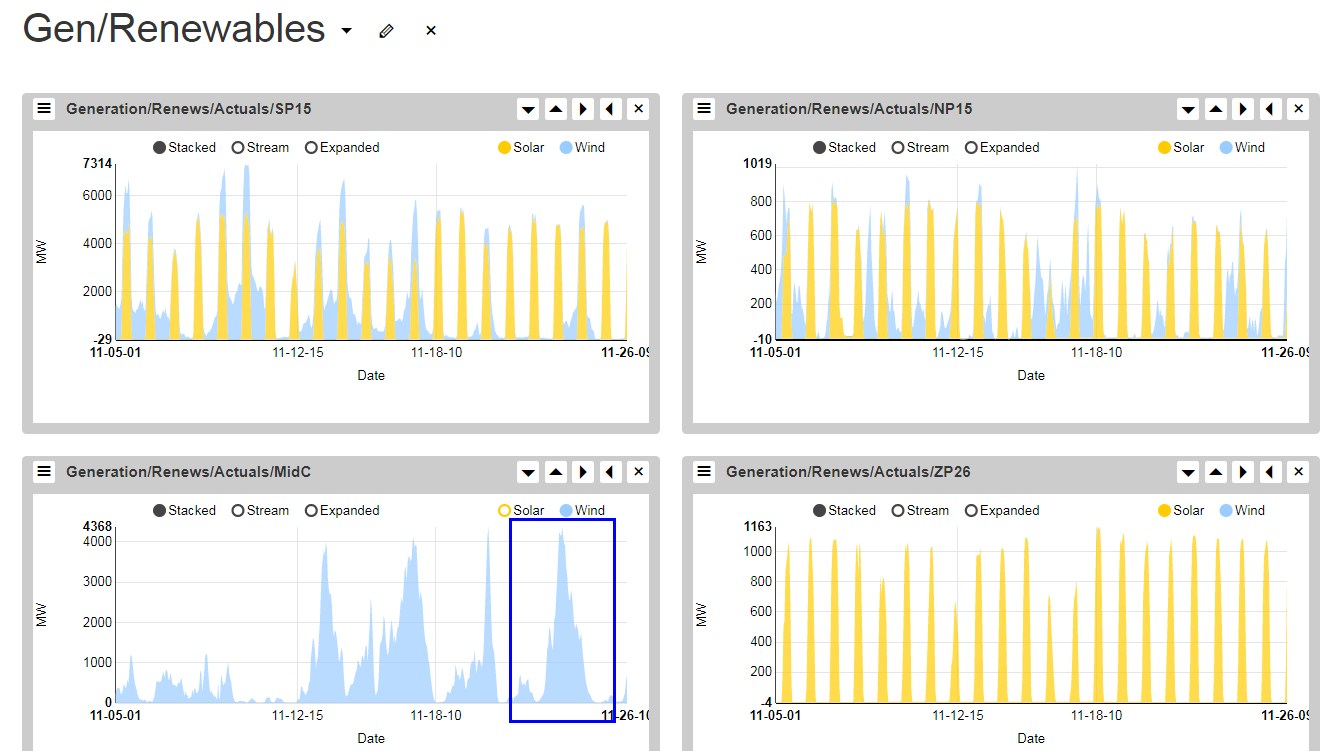 The Northwest realized a big surge in wind generation on Saturday, nearly four gigs. The ISO saw some wind on the same day, but not like the Mid-C.

California’s precipitation outlook is quite dry, a small storm in a few days then next to nothing; not too much different in the Northwest:

Where a week ago the Northwest composite index was over two inches, today it is but 25% of that, barely a half an inch. Beyond the ten day, it looks even grimmer; there is next to nothing lined up and just as the anomalies start to matter. Where all the bears were dancing with joy three weeks ago, joy over a  big Mid-C water year, now it is looking like a below average year. 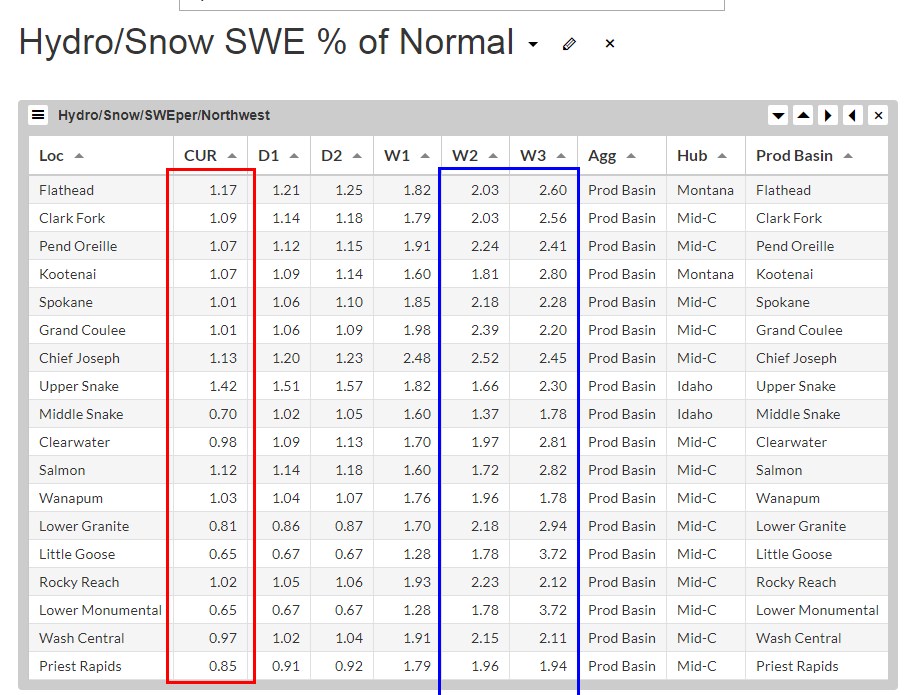 And these anomalies incorporate the recent very wet weather; wait until we go through 21 days of below normal precip, the water supply numbers will be flirting with low 90s.

BC’s reservoirs remain normal, and the USA Northwest projects are quickly reverting to normal, all off of a refill at GCL:

That refill came at a cost – a cut in the generation, suggesting inflows remain tight, though we see some bearish increases on the Pend Oreille:

Flows at Box Canyon have doubled in ten days, a proverbial drop in the Roosevelt bucket, and with dry weather on the horizon we’d expect them to fall back in two weeks. 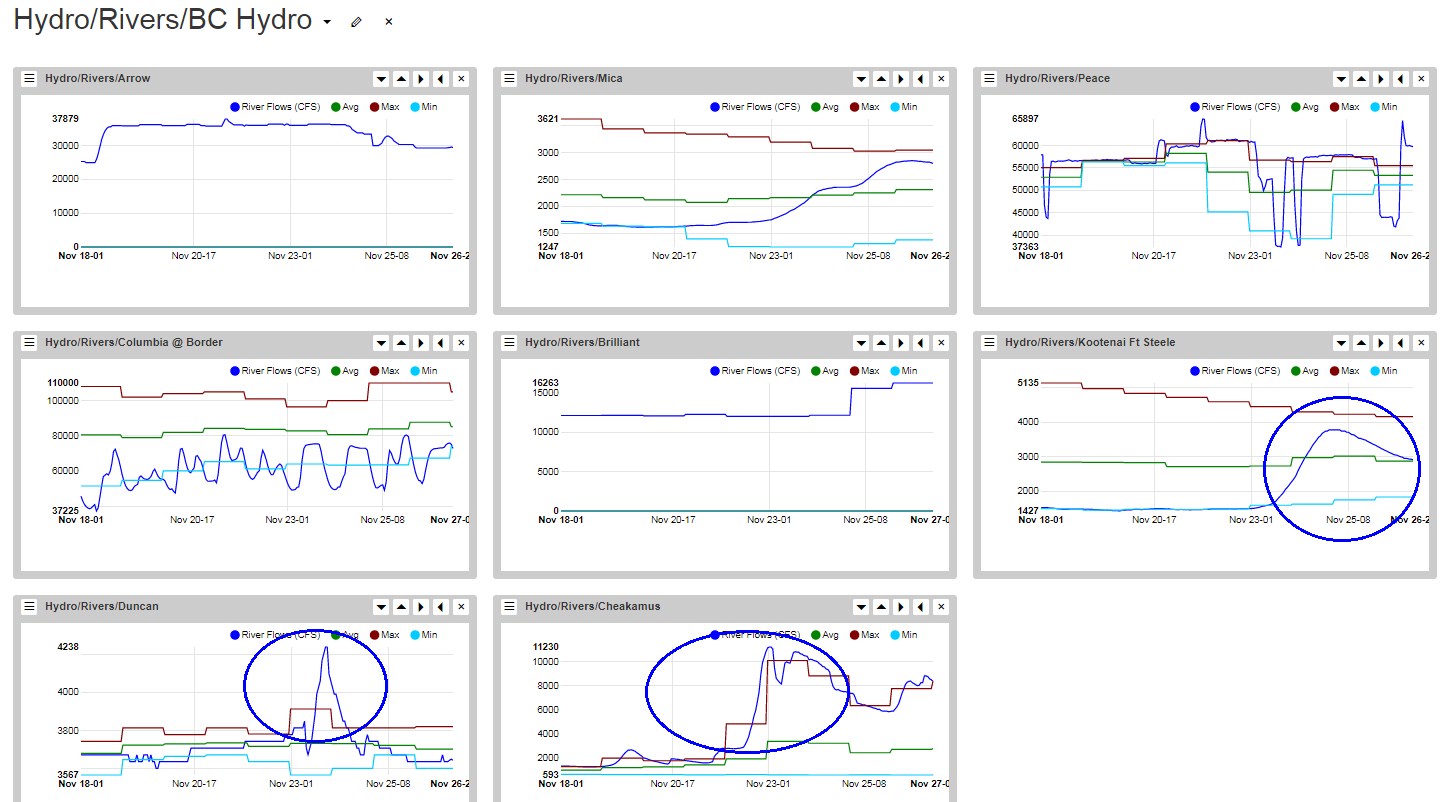 Some of BC Hydro’s less-regulated projects also realized big bumps in discharge off of recent rain and warm weather.

All of which has resulted in a lot more water flowing through the lower Columbia projects; check out the wild shaping taking place at Bonneville Dam.

The AC and DC are mostly base-loaded, and now the Canadians are buying cheap Mid-C, turning themselves into net importers. 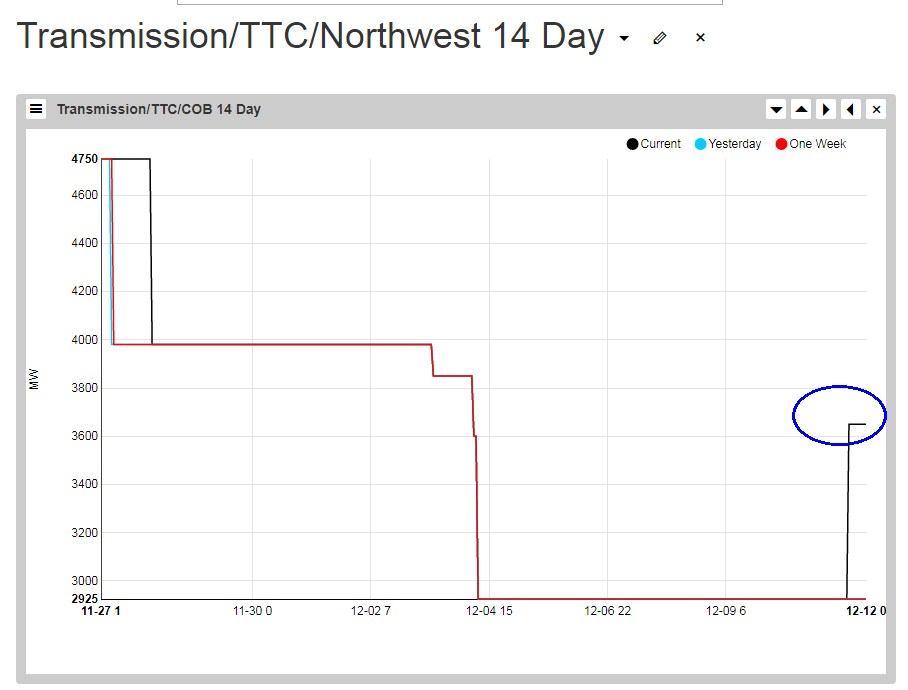 We caught a bump in TTC in BPA’s most recent 14-day outlook; the bump adding 900 MW to the export capacity.

The outlook for the Northwest is growing more bullish, so it is in the WECC interior. Even California is poised to realize some colder than normal weather, but more importantly, the entire WECC is heading into a dry spell. How long that lasts will be the most important question to answer.