Many won’t be at work, and yet more than a few will be. Often holiday weekends are the most interesting, either because the weather is volatile or the dearth of participants drives real-time to higher volatilities than it would otherwise. West power is singular, somewhat, in that you can look at the fundamentals on any day and find exciting changes. There are more than a few worthy of discussion and, perhaps, your thoughts.

Significant heat hit the LA Basin, did the market go bananas? Not, not really, though the DA on peak LMPs cleared with a $50 handle in SP. The NP barely budged, and MidC enjoyed a small “tag-along effect.” Gas was more interesting, Socal Citygate is back to sporting a $4.00 handle and setting the highs for the WECC (and probably the continent). Those high prices certainly weren’t driven by demand: 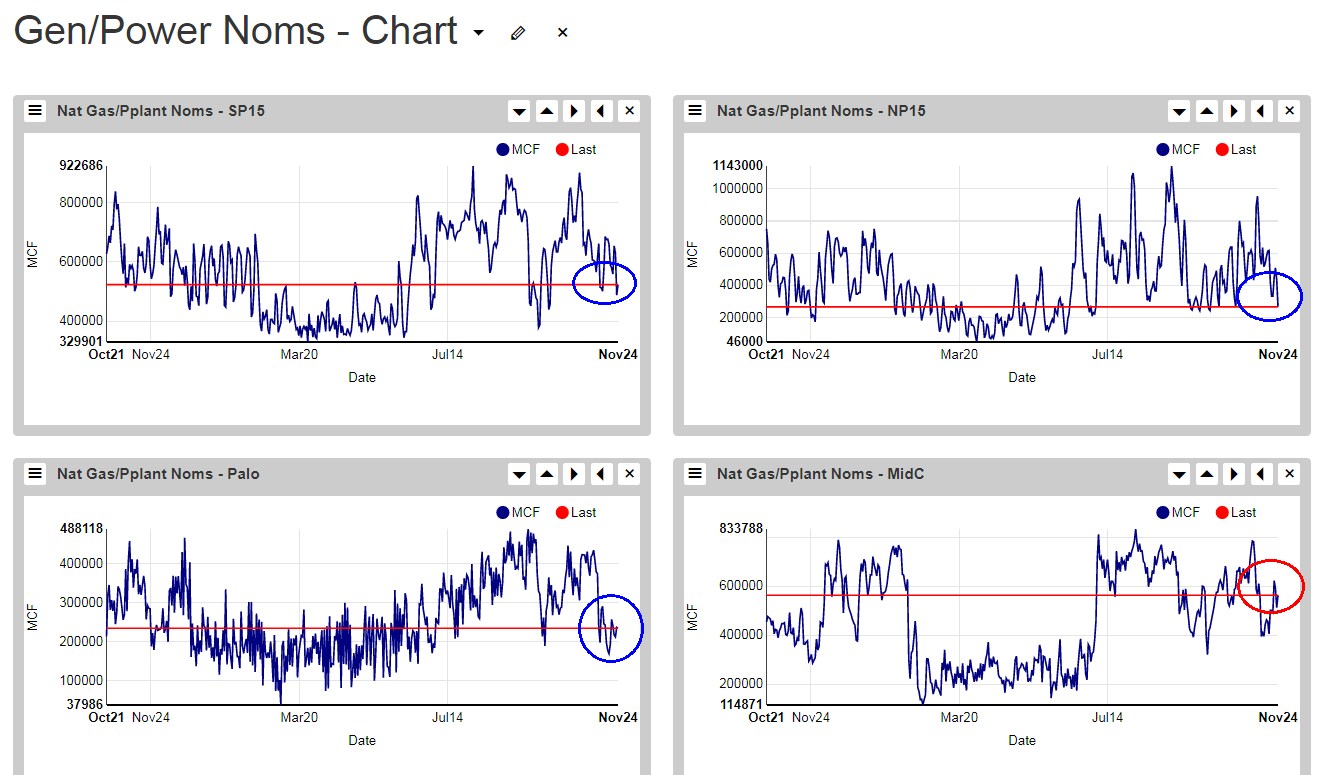 Despite the record-breaking heat in the LA Basin, gas noms inside SP fell. We alluded to this possibility in prior posts — the rest of the hubs were just too long and would pounce on any signs of bullishness, and they did.

ISO imports are up about 3000 MWs, which is almost the same as the heat-driven load rally inside Socal. But back to those noms, both NP and PV also realized a generation-based demand decay, though surprisingly, the Northwest saw a slight rally. Go figure, none of the realized fundamentals inside the MidC support that (more on this later).

The above plots the DA hourly LMP for the last week; check out the congestion at Palo into the ISO – those bottoms were on HE19. SP set the highs, and there was congestion at ZP, but we’re surprised there wasn’t more given that Sacremento was in the mid 60s while LA baked.

Same chart just zoomed in the last three days. As the heat decayed in LA so did the price and congestion; Turkey day was quite weak. 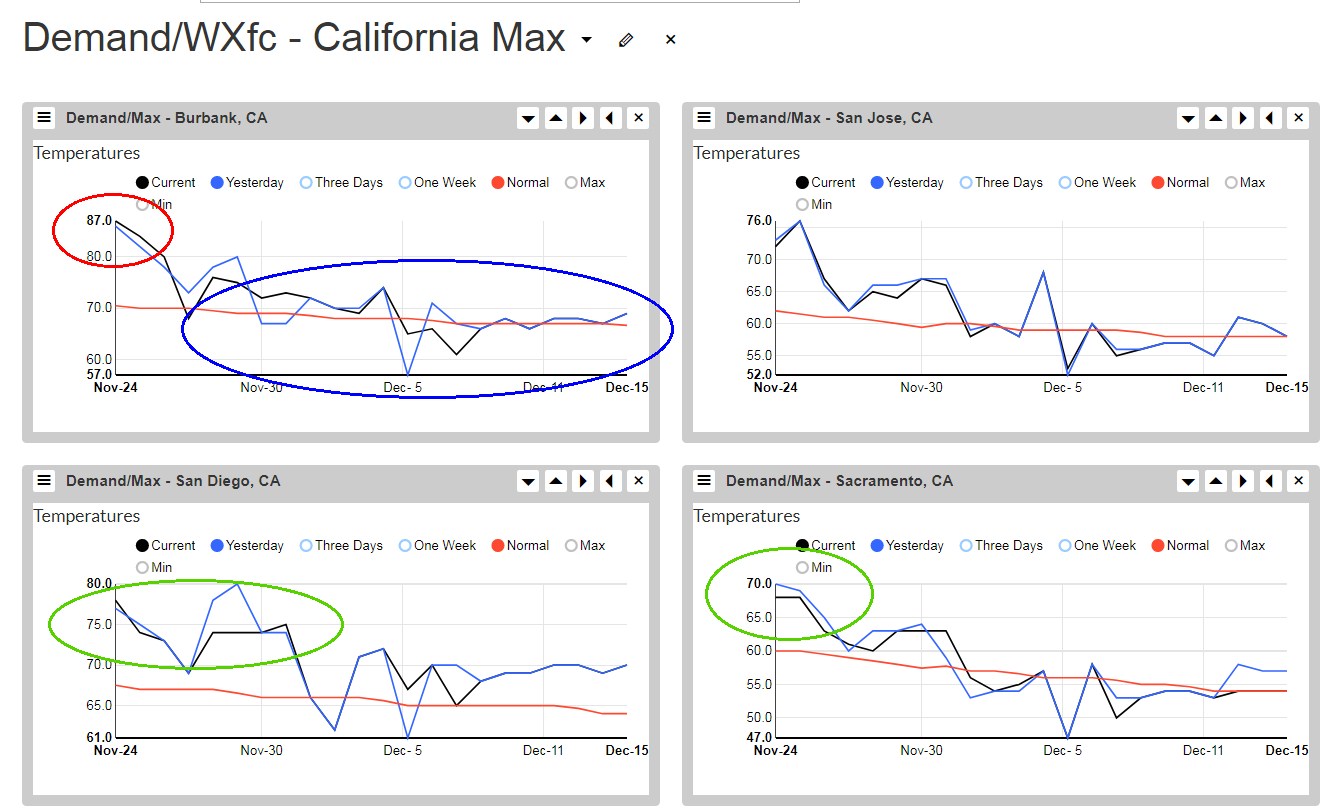 LA is still in the mid-80s but, if you believe the NWS, the forecasts are set to plunge to the low 70s, high 60s, by next week. I guess summer is over? These plots show no hints of anything bullish for the ISO, not cold nor heat. 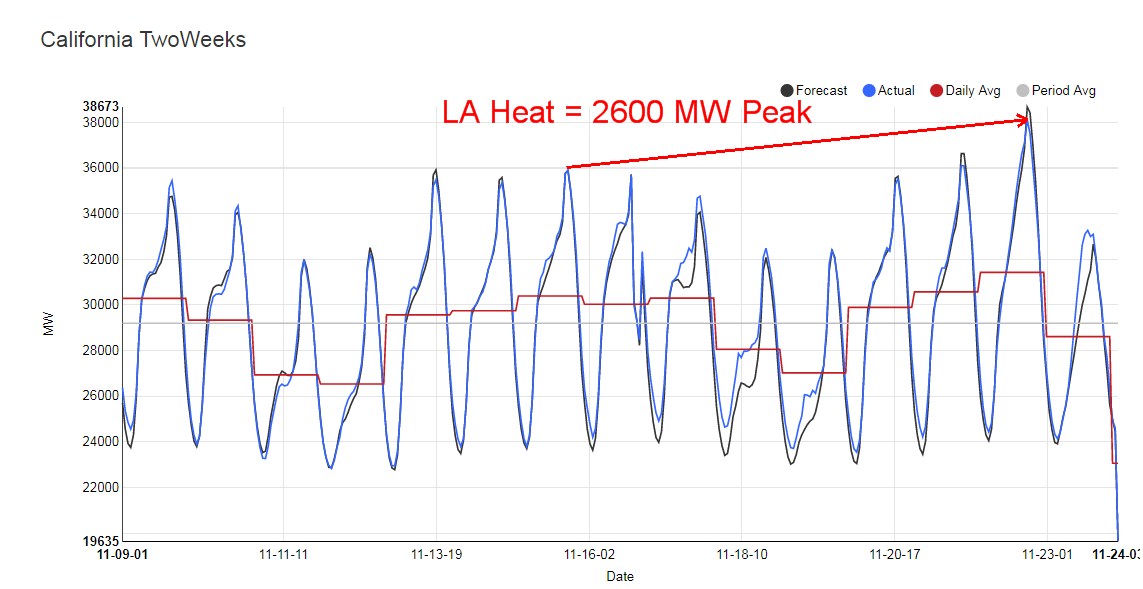 Wednesday’s loads for California rallied 2600 MWs and had come off hard since then. 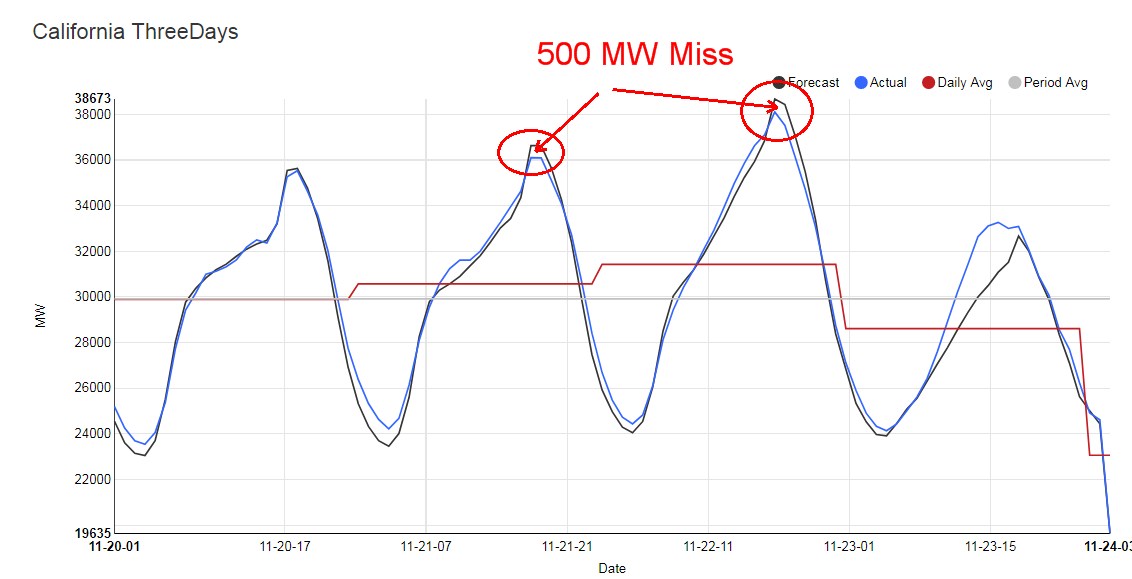 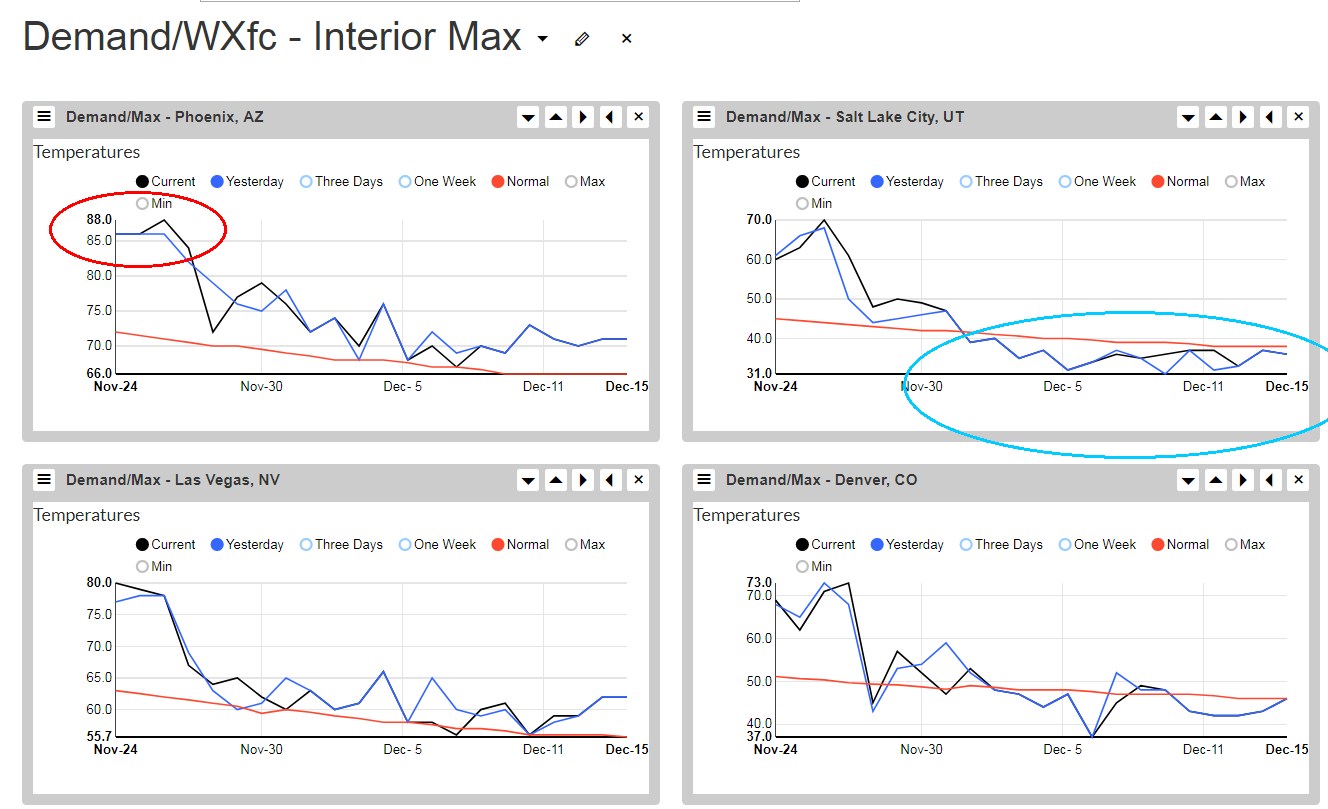 Phoenix remains well above average, what else is new, and soon will slide to just normal; the hub’s loads will fall further and put more downward pressure on prices – everywhere. Plus, there aren’t any hints of heating load inside the interior hubs in today’s forecast. 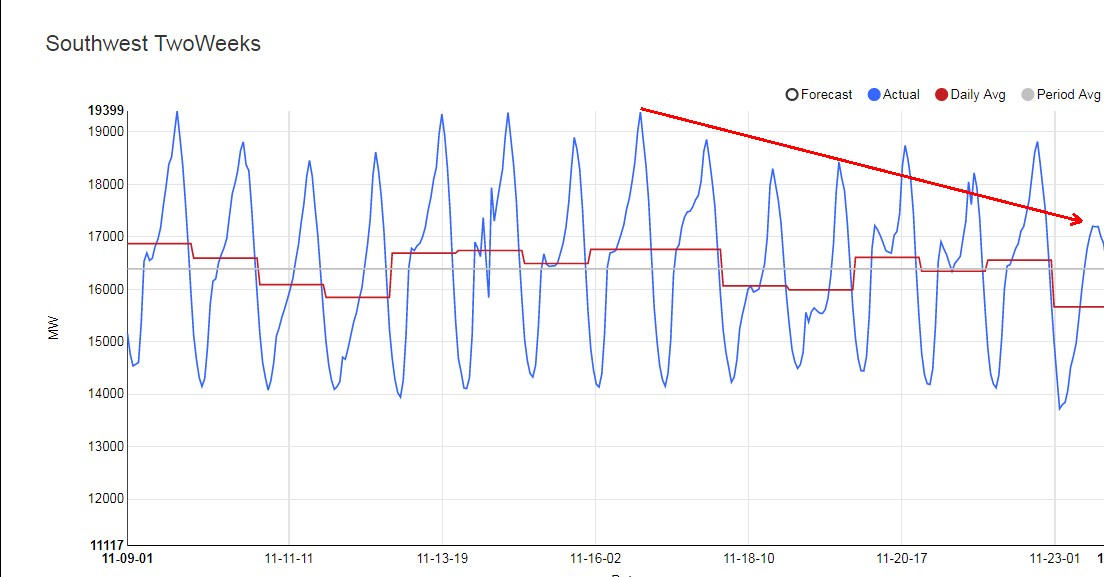 Demand decayed dramatically, despite the 10-degree positive anomaly in Arizona. That trend too shall extend into next week on ever cooling temperatures. 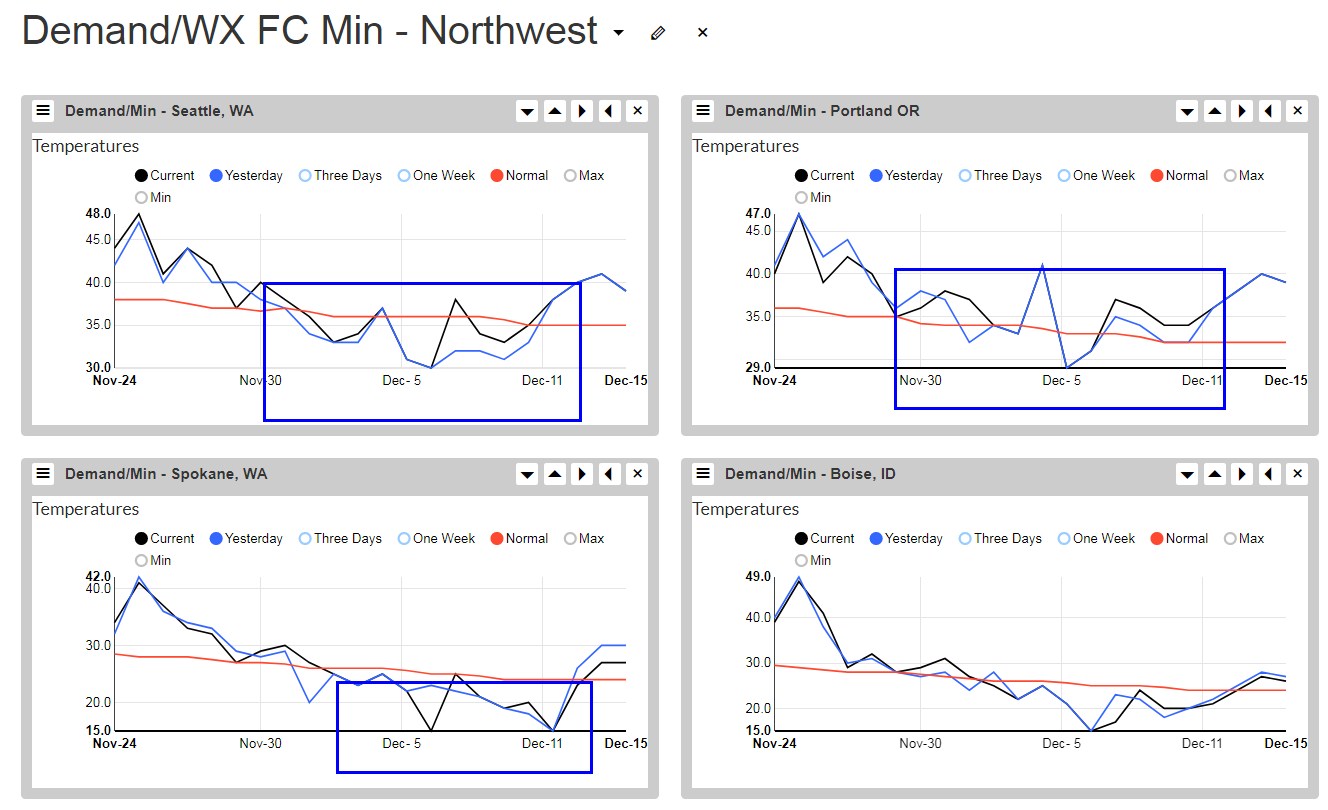 Here you go, something bullish — cold weather, or at least not warm anomalies, in the Northwest. These changes don’t save the BOM, that strip’s officially a bust, but do pose a bullish framework for Dec. 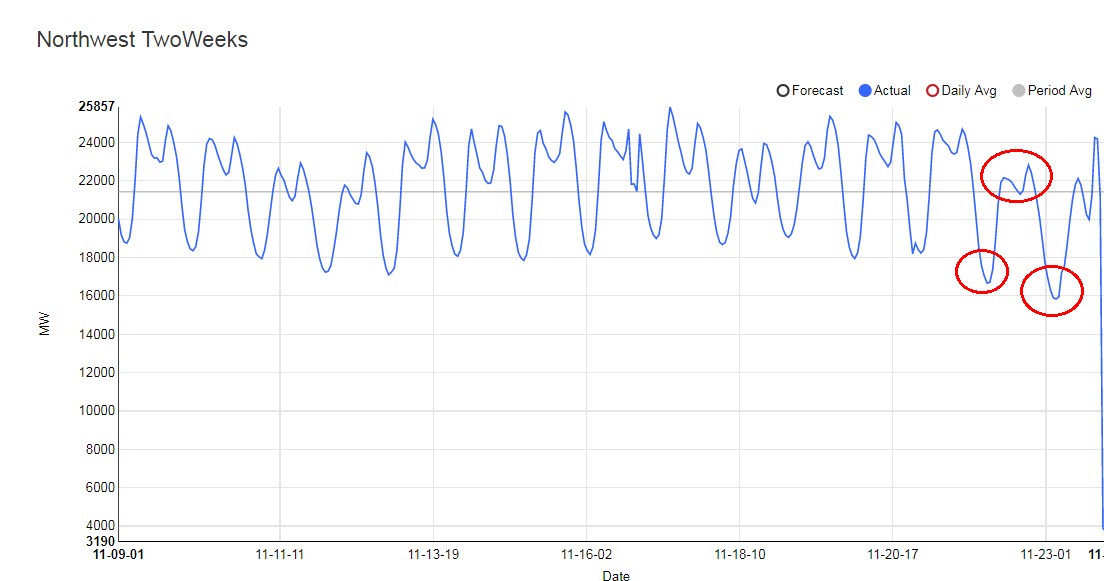 Realized temperatures say it all – hot in SP, not in NP; the Northwest was over ten degrees warmer than a week ago.

All the nukes are running, but the wind wasn’t. 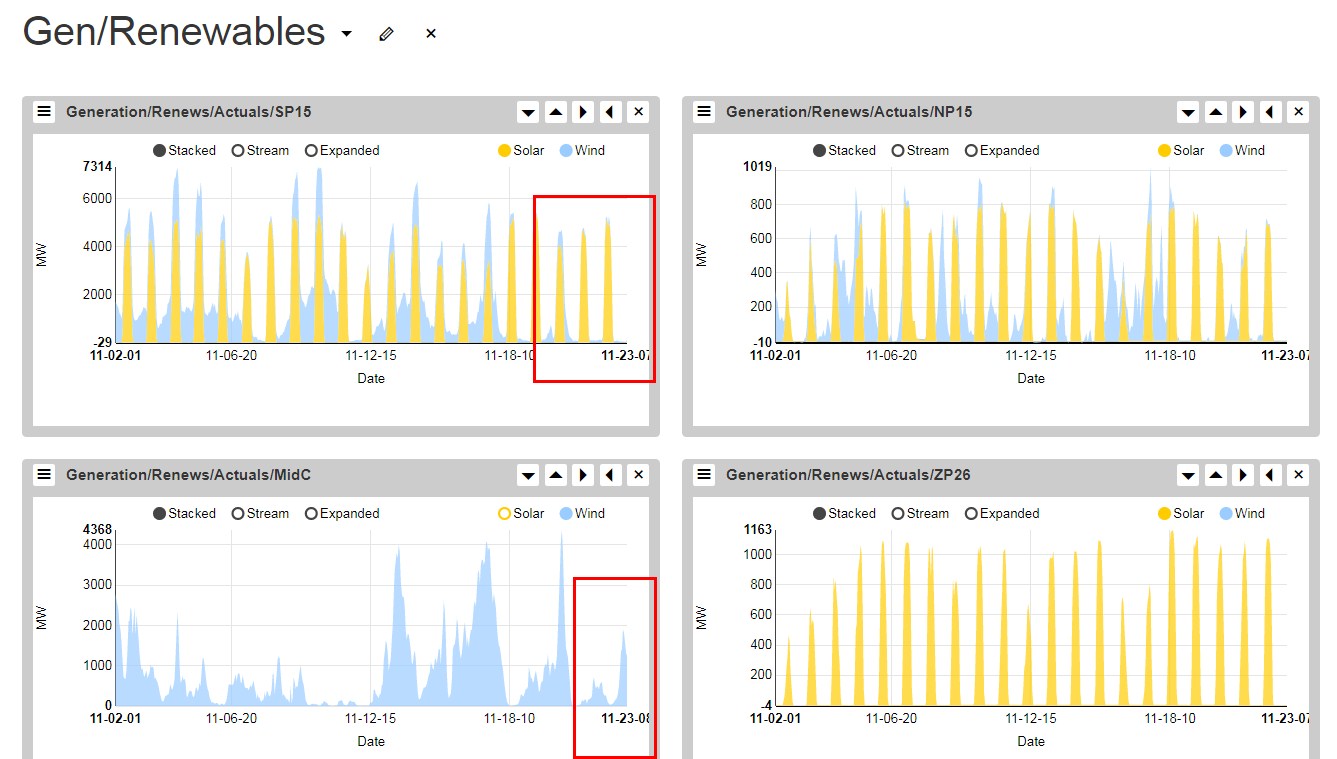 Fortunately for the longs, there was little to no wind generation over the last couple of days. 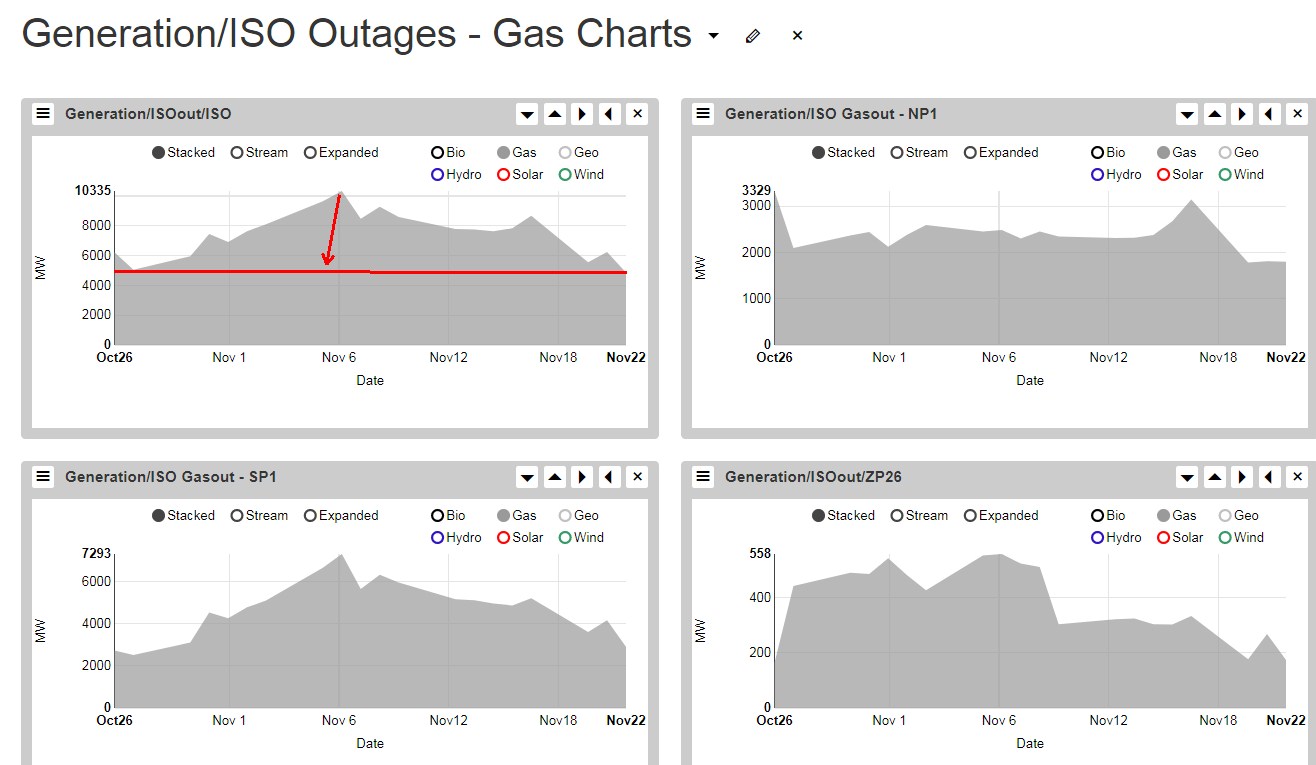 While wind died, so did the gas outages; these are off, collectively, about 5000 MWs over the last two weeks; the outage season is ending.

There is a lot to cover in this section, starting with the precipitation forecasts:

The Golden State will be drowned in rain this weekend; nearly two inches at Lake Tahoe, and this is the first massive event. Even worse, most will come down as rain and flood into already full reservoirs which will render the state a big run of river mess.

Check out the spikes from the last storm, a week ago; this one is bigger, and the reservoirs are fuller.

The 12-week decay in ISO hydro product has ended; the last week has seen a steadily increasing amount of hydro energy. With this weekend’s storm, that trend will extend.

The aggregate outlook for the MidC is dryer than a week ago; not dry as in no rain, dry as in less rain than usual, or that was forecasted last week. There are hints, however, of another significant event in days 11-15.

These are two plots from our STP research; the first plots daily energy (not shaped). Note the massive increases in January water; there is no rhyme or reason for this type of change, it is driven off the NWRFC’s model vagaries. The plots to the right compare aMW for the current water year against prior water years, the same week of the forecast. We find it somewhat singular that Nov-Dec are very low and Jan -Feb so high. No one’s crystal ball has a fundamental reason for this, and we suspect all (Dec-Mar) will mean-revert over the next several weeks. 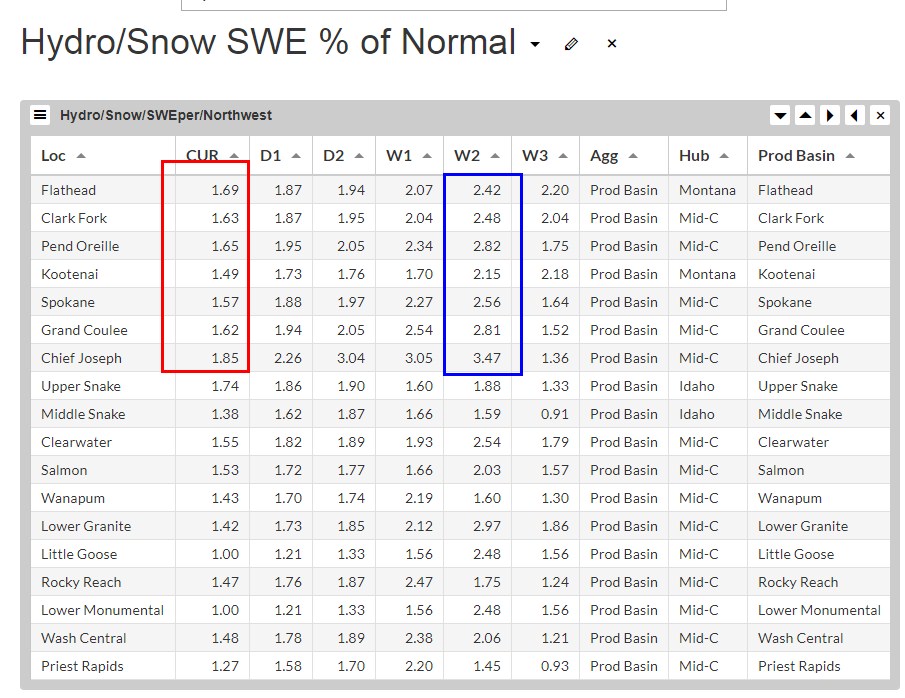 Some of this is driven by just significant and early snow a few weeks ago, some of it is also driven by melting snow from warm weather. Either way, it does speak to the dangers of placing too much credence on early water year anomalies, they too tend to mean revert. 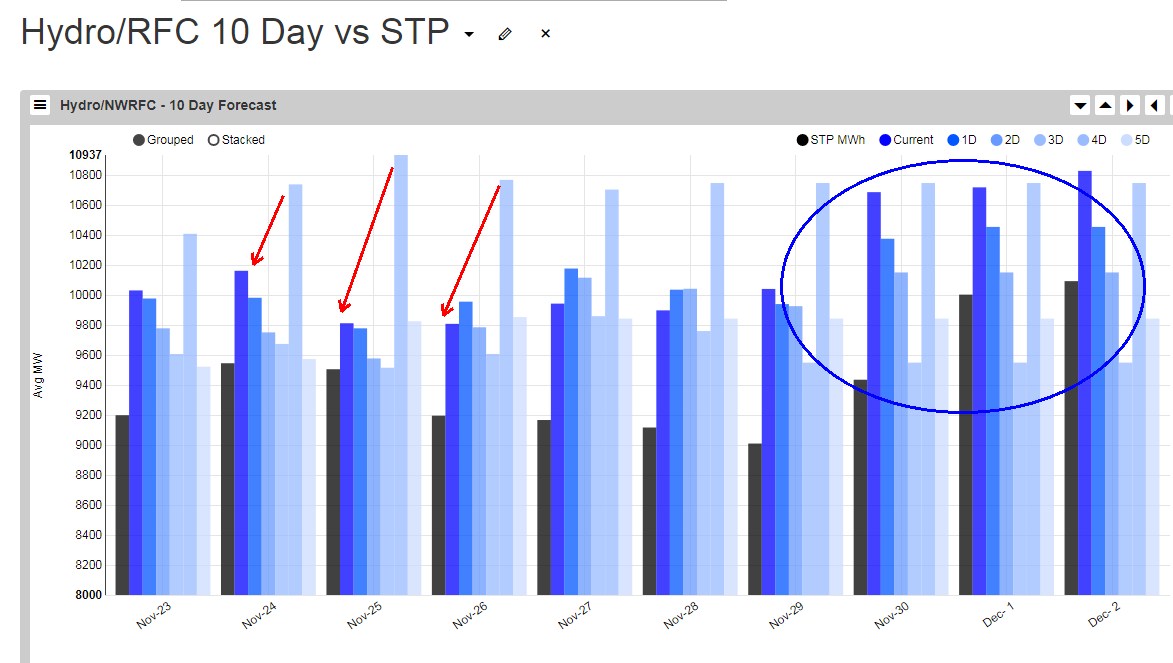 While on the subject of the NWRFC, it is always entertaining to look at how their ten-day changes across time and also suggests not placing too much confidence on any of their numbers. Now the front (next five days) has become much tighter while the back is getting longer in water. This merely reflects what we already pointed out in the STP chat – the Dec was too low and they are walking it up and we anticipate next Monday’s STP to show a big Dec bump.

Flows out of Arrow remain strong and we’ve seen an uptick in Mica discharge. The Peace saw a crash, probably more driven by no loads in BC, but also by imports from the MidC. 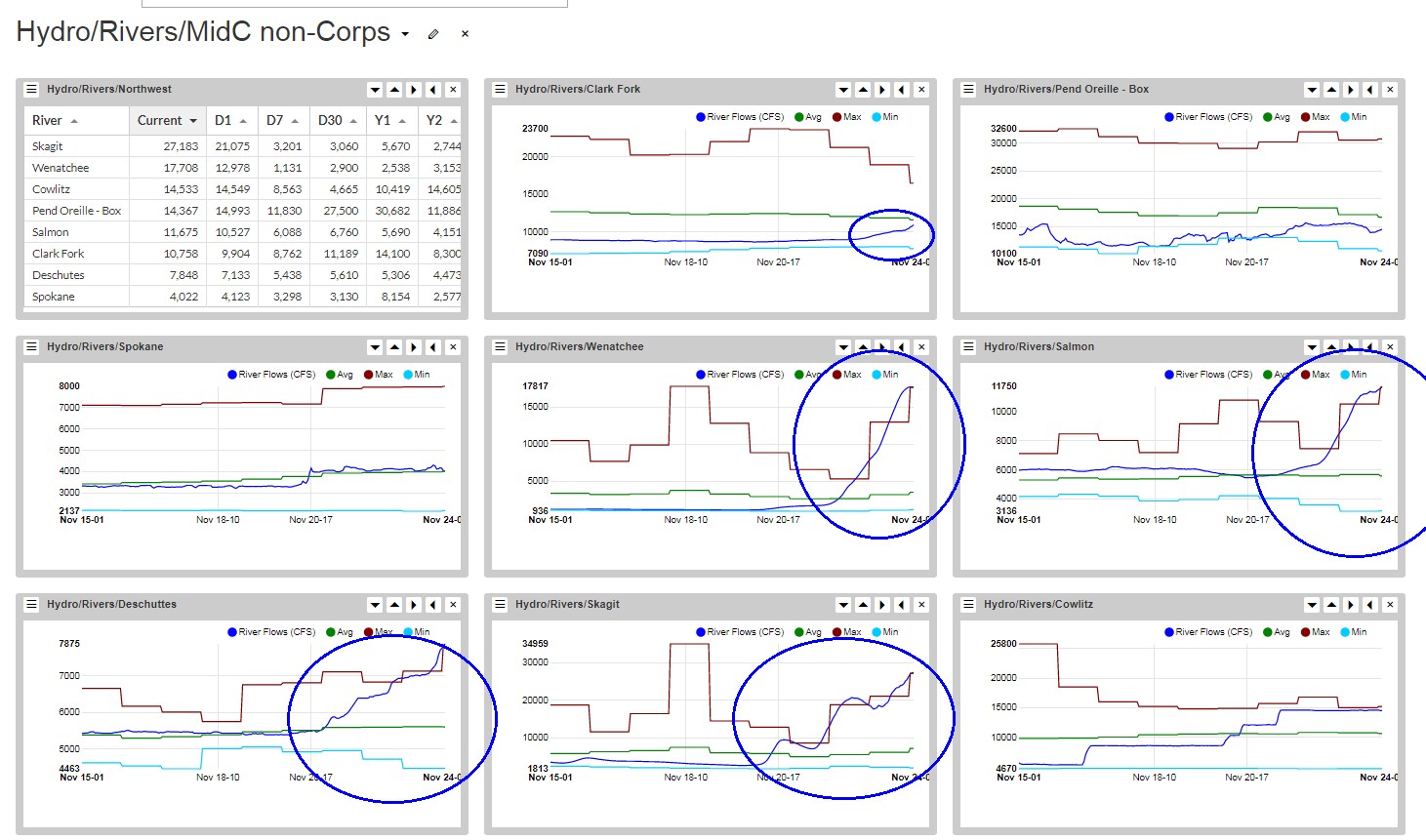 Mostly unregulated flows have surged in the Northwest off of substantial rain and warm weather which is melting snow.

Check out the cycling at the last dam on the Columbia, Bonneville. We’ve also seen a more prominent draft at Libby and Dworshak while Hungry Horse cut flows.

Coulee output has fallen hard which may explain some of the gas nom strength; some of that cut inflows is going back into the pond.

See, BC is buying up the slop at MidC; the DC is back to flowing (and crushing) the SP; the AC is more at TTC than not. Telling that flows on Path 26 weren’t higher, it demonstrates how weak the SP’s heat wave was on the market. Meanwhile, Palo couldn’t give away its energy a few days ago and spiked it into the ground.

It’s weak out there, you might even call it ugly, except for a cooling in the Northwest and a slight drying. Given that the markets are next to non-existent today, we will punt on the APT and resume that effort next Monday. Enjoy the rest of your holiday.