There are massive warm anomalies throughout the entirety of the West as every station shows up at least four degrees above normal, and as high as 12.5 degrees.

Phoenix gets a similar forecast in the front end with highs in the upper-80s and several consecutive days with new 10-year highs.  The warm anomaly is expected to last even longer however, as just one day of the next three weeks shows up below normal.

Las Vegas gets sustained highs of 79-80 degrees through the weekend, putting each day close to 13-degrees above normal.  Things may cool off quicker than expected in yesterday’s forecast thereafter as the 28th shows a high of just 60, one degree below normal and seven below yesterday’s forecast.

Denver has a few chances to set new 10-year highs over the next five days as temps jump into the 70s on multiple occasions, reaching as much as 21 degrees above normal by the 25th.  The end of November should bring a return to normal daily highs as the remainder of the forecast hugs the average line. 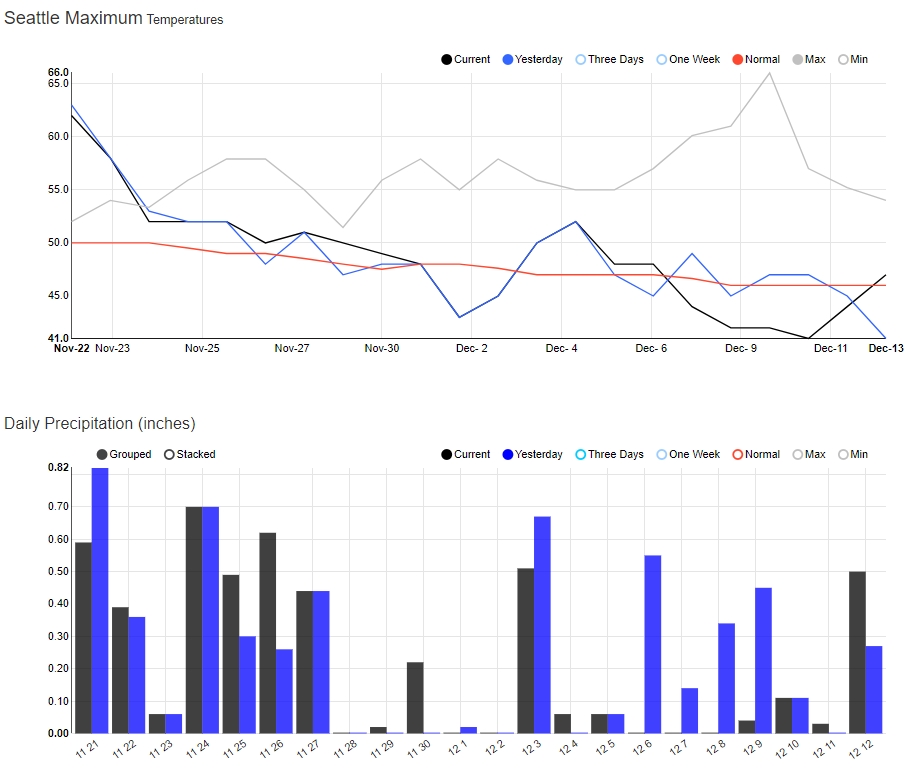 Seattle gets an almost balmy high of 62 today, 12 degrees above normal, but will pair that up with close to 0.6″ of precip.  Highs fall ten degrees soon after, but should sustain above-average highs for the next week and a half. 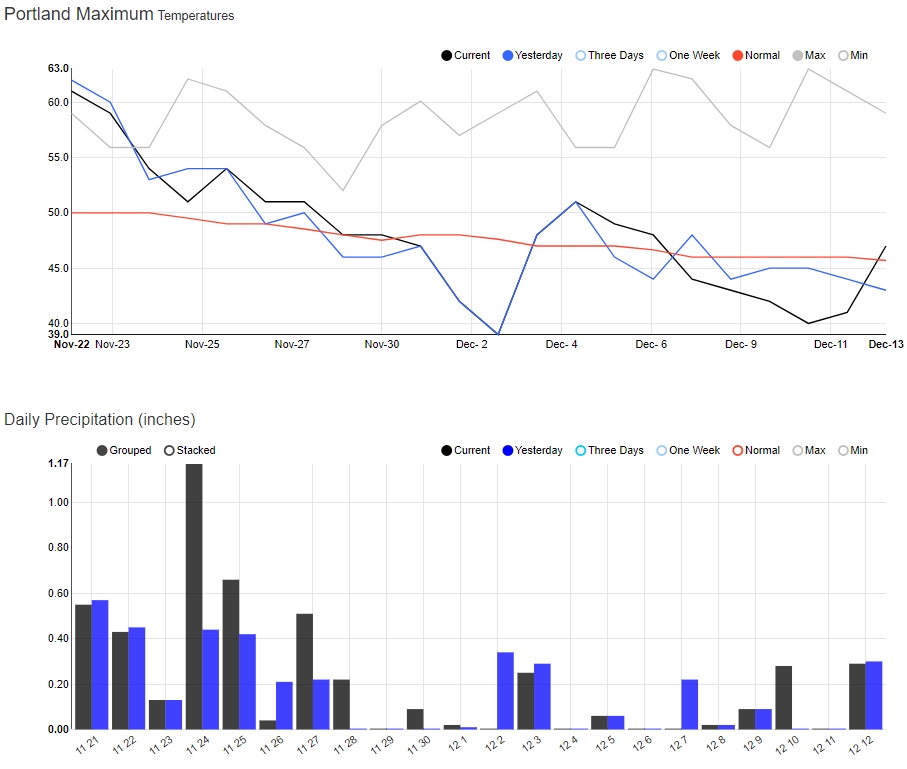 Similar chart for Portland as today’s high sits at 61, 11 degrees above normal.  Rain will hit the area even harder however especially on the 24th where 1.17″ is expected. 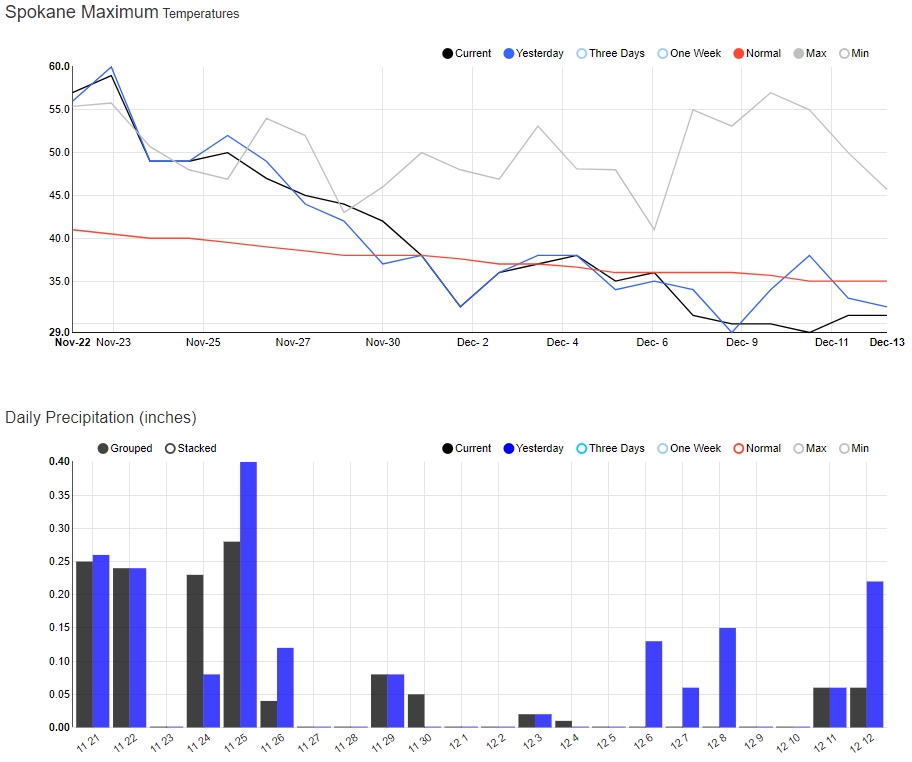 No precipitation to note for San Jose, but its daily highs are exciting enough.  Look for sustained mid-70’s through Saturday, all falling at least 10-degrees above normal.  San Jose should drop below average until December.

Sacramento’s latest forecast comes in consistently cooler than what was shown yesterday, shaving as much as four degrees off highs by the 25th.  Nonetheless, Sacramento will still sit well north of normal for at least another week as high get close to 70 during each of the next two days. 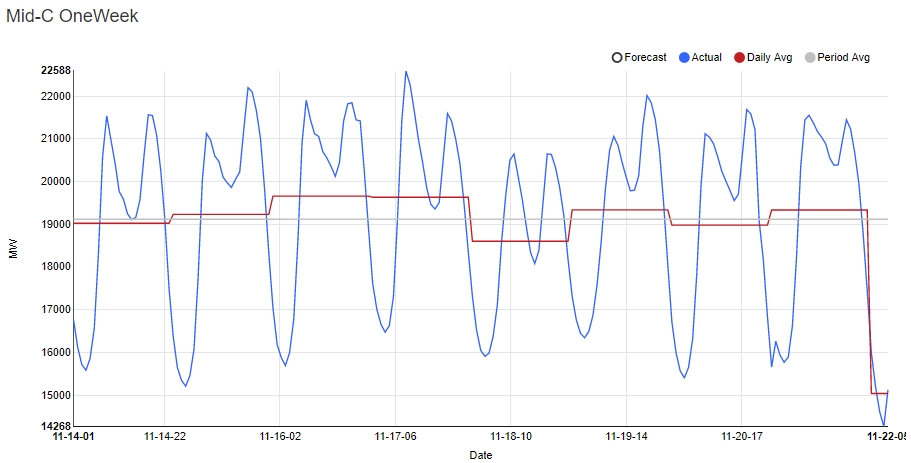 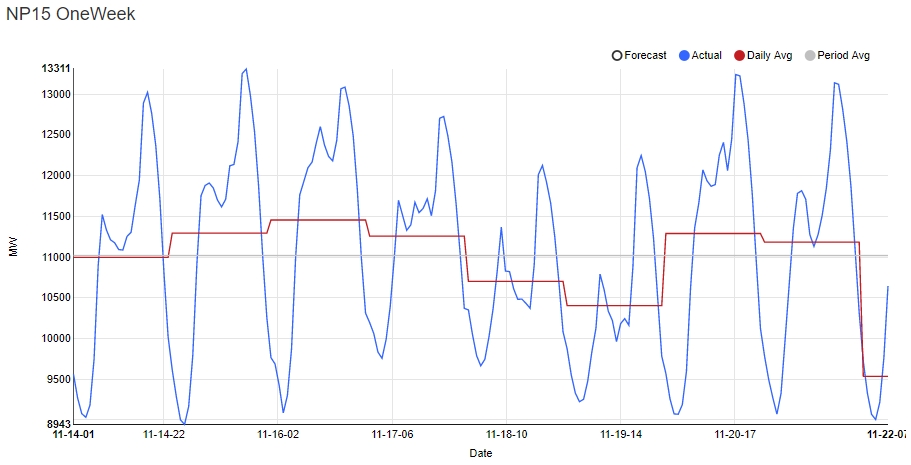 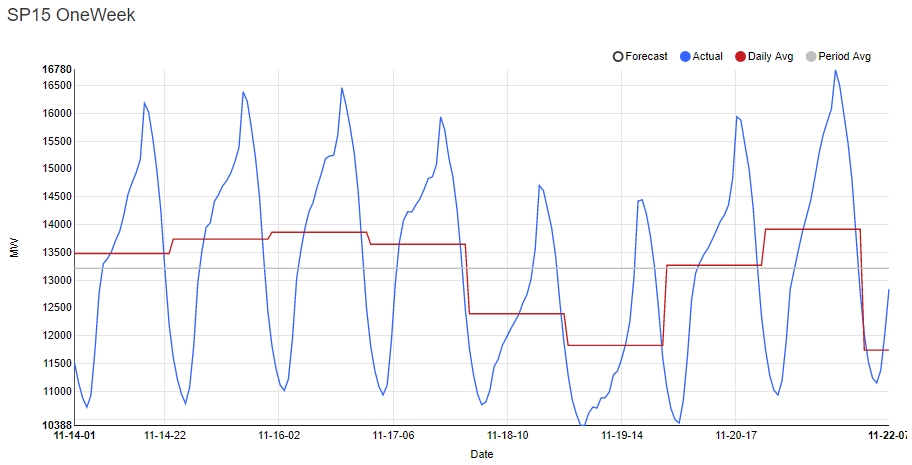 Yesterday marked significant average-daily demand growth as the day finished with loads 660 MW higher than Monday largely thanks to an hourly high of 16,780 MW, an increase of over 800 MW day-on-day.

Monday’s NWRFC 10-Day forecast continues to stick out like a sore thumb on the front end, though today’s update trends closer to Monday on the back end, leaving a difference of just 529 aMW for the 30th (compared to 1,200 aMW yesterday).  STP is moving in the opposite direction as it shows a decrease to round out the month.

Grand Coulee slowed down its draw yesterday but has still shaved off nearly four feet in elevation since the 15th, also putting the reservoir 2.5 feet below average for this date. 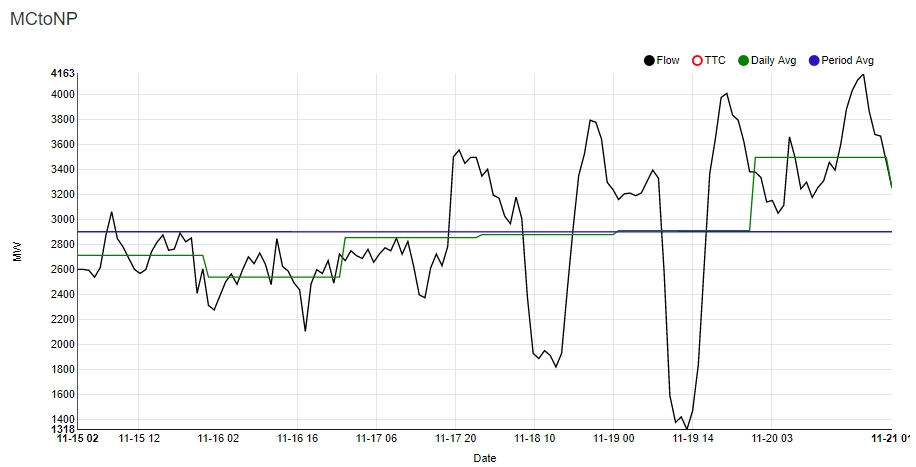 The daily average flow increased just shy of 600 MW day-on-day as hourly flows sustained 3,000+ MW for every hour.  This comes as a stark contrast to Monday which saw flow drop to 1,318 MW in the early afternoon hours. 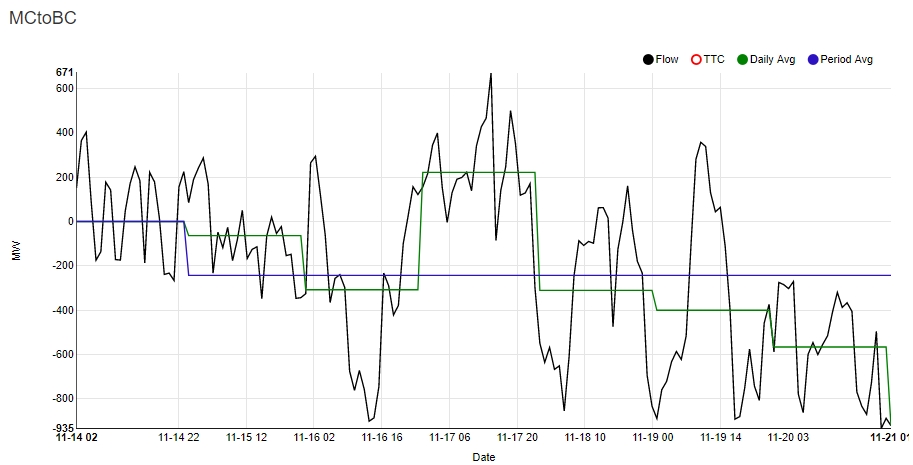 The daily average in MC-BC dropped for the third-consecutive day, eventually settling at -567 MW, 160 MW lower than the day before and 500 MW less than last week.  Hourly flows fell as low as -935 late last night.