Lots of news around the west, some of it is “new, ” and some of it is newsworthy, the rest is just blog fodder. Let’s start with cash:

$15.00 cash spreads to MidC, but that makes sense given there are no loads in the northwest, and the DC is down. The latter is coming back this weekend, but we saw a bullish MidC demand forecast fade to climo, and the region will be pounded by heavy rain for the week suggesting west-side hydro will see a significant ramp putting more downward pressure on cash, at least before the DC return.

The NP|SP heat rate spread has blown out, but only because the PG&E Citygate | Socal Citygate spread collapsed. The latter has tanked because of the Needles/Aliso hype and the fear/hope that Socal can’t serve all of its gas needs. We already shared our thoughts on that – we just don’t see a problem without LA hitting low 30s, and that is not in the cards for the next 21 days. Yet none of our opinions matter an iota in the marketplace — if the market thinks there is upside they’ll continue to bid the SP and the price will go up. You can be fundamentally right and still find yourself making e-coli burritos at Chipotle — so be careful.

The Day Ahead LMPs ticked up, week-on-week, and we saw some hints of solar-ramp congestion on Thursday and Friday. Over the weekend, there was no congestion, just miserly low prices. 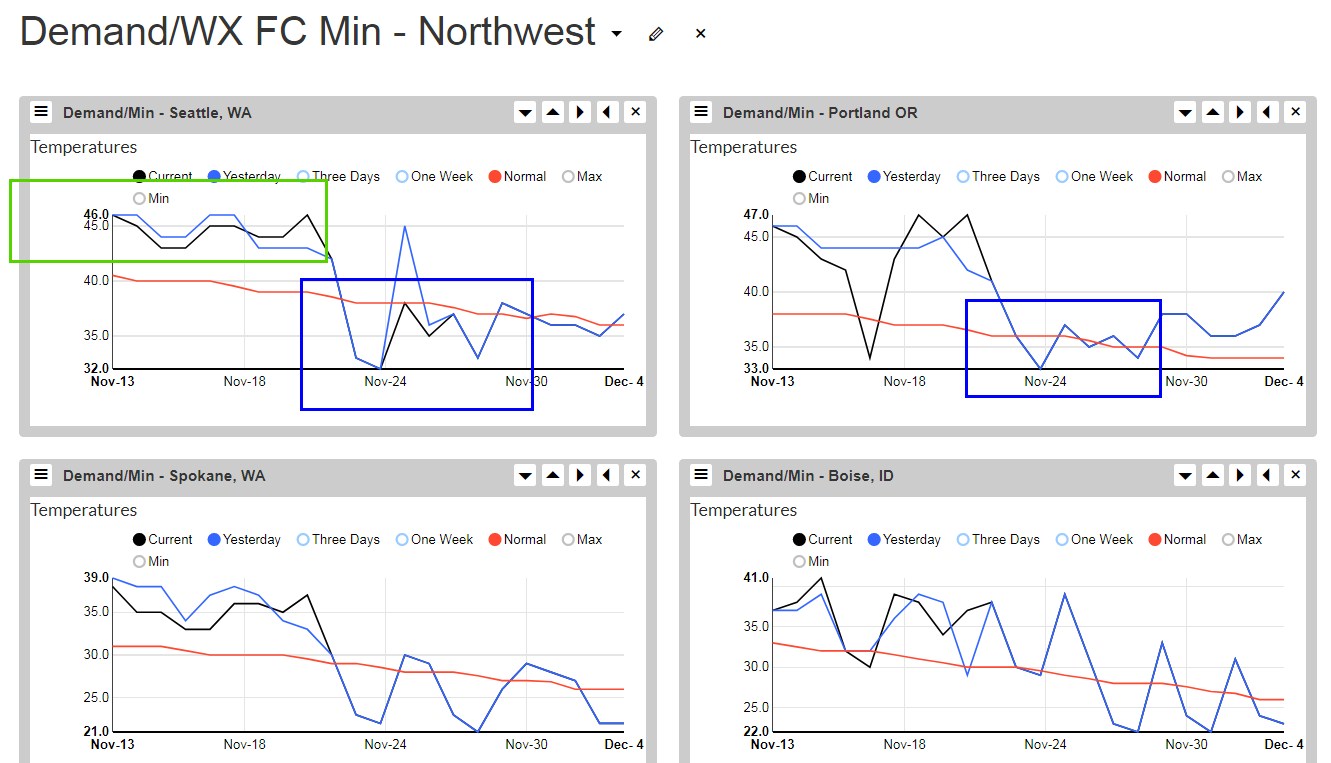 The Northwest must brace itself for blase loads this week, and then there is a teaser of cold next week but, alas, that is Thanksgiving week, and cold weather is wasted on the holiday. Somewhat, we say, because while the A-Team is at home giving thanks, the B Team will be running the show. Extended cold weather could make for some holiday volatility. 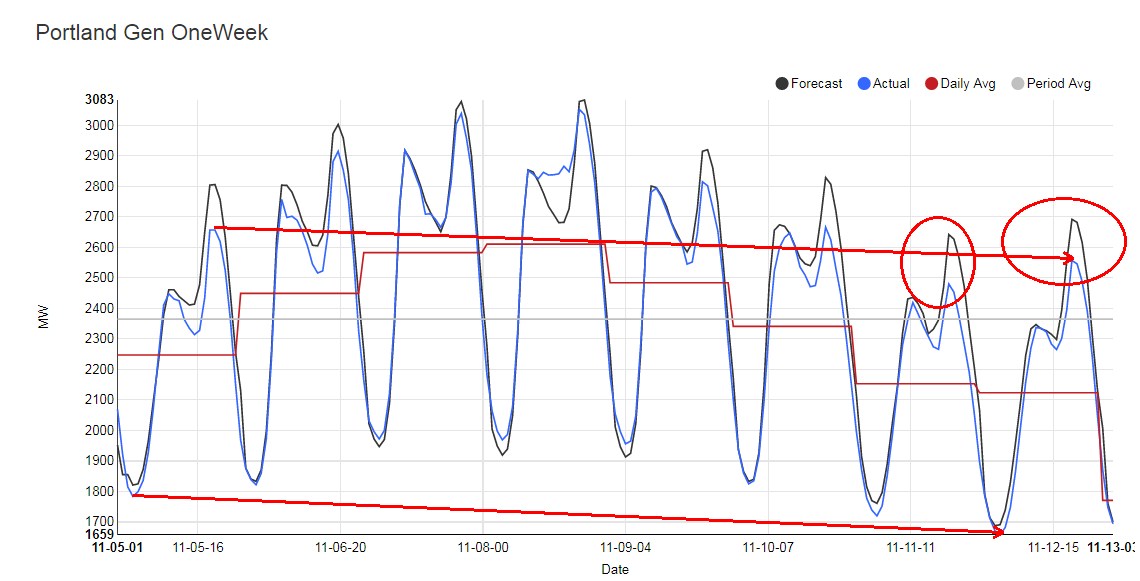 Portland General’s loads are sliding both in the peak and the bottom and the poor ute has been over-forecasting its loads nearly every hour: 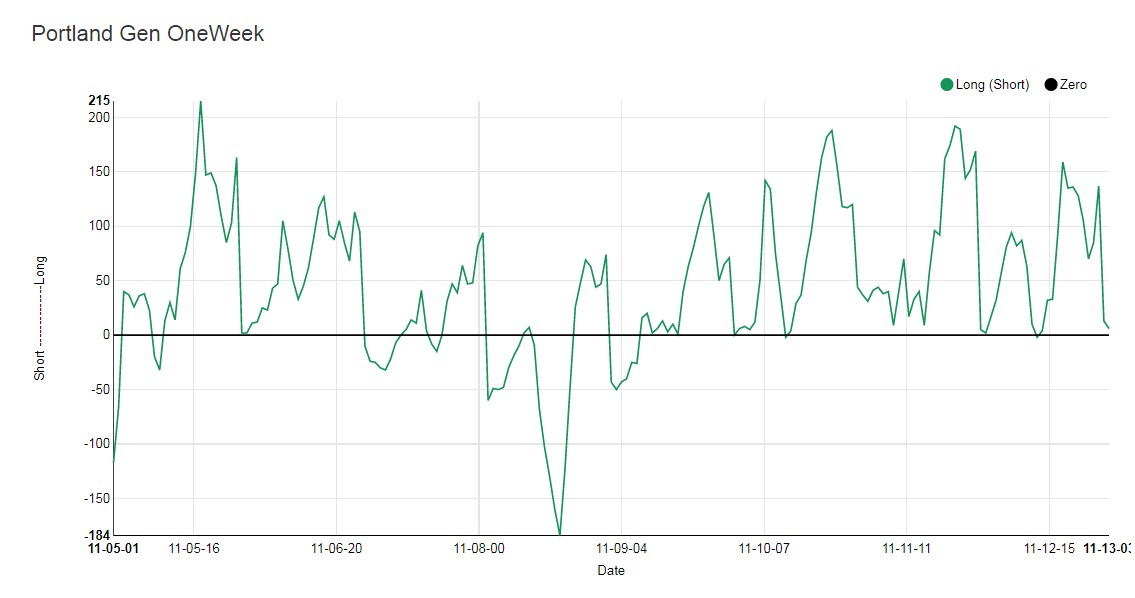 Weather just has not been that cold; apparently warmer than the load forecast team projected. 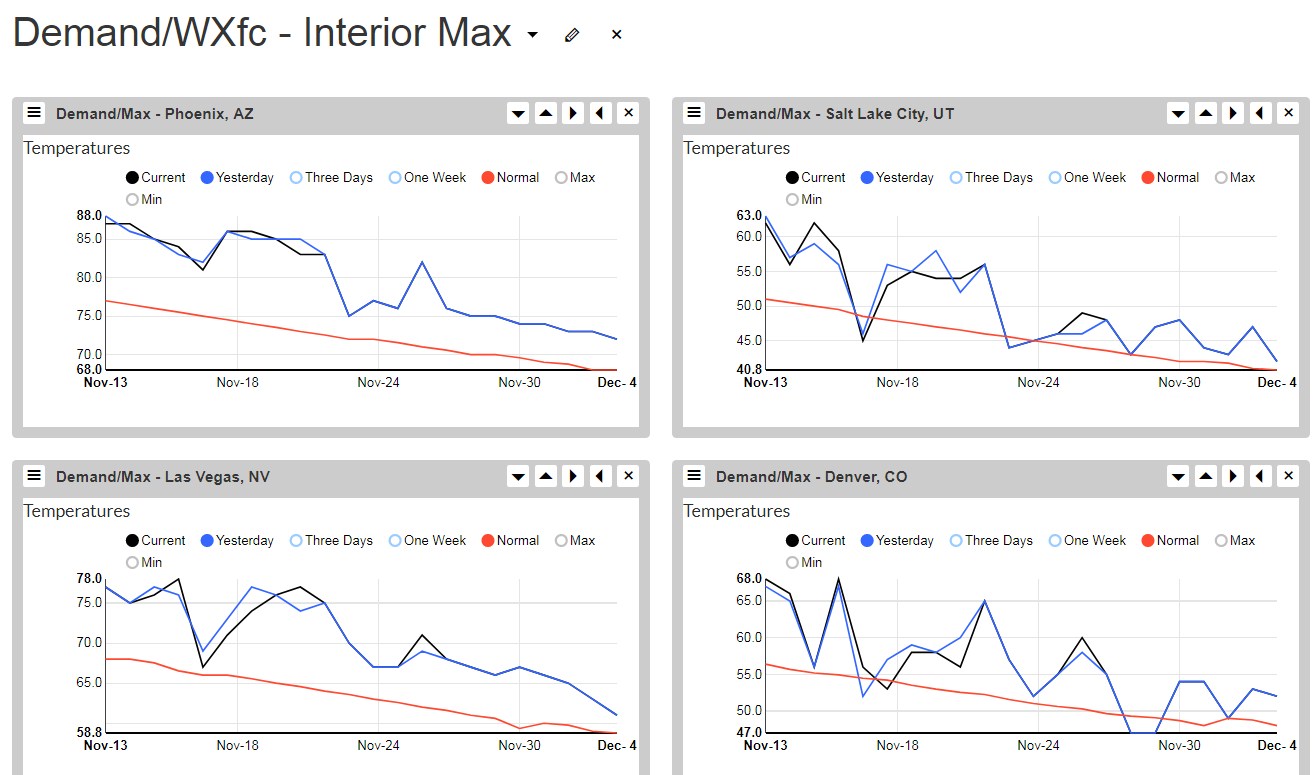 Phoenix is on a 180 day “above-normal” streak, and perhaps it is time to redefine “normal.” We use a ten year hourly; maybe we need to go to five? All four load cities are above normal nearly every day over the next twenty-one days all of which is bearish. 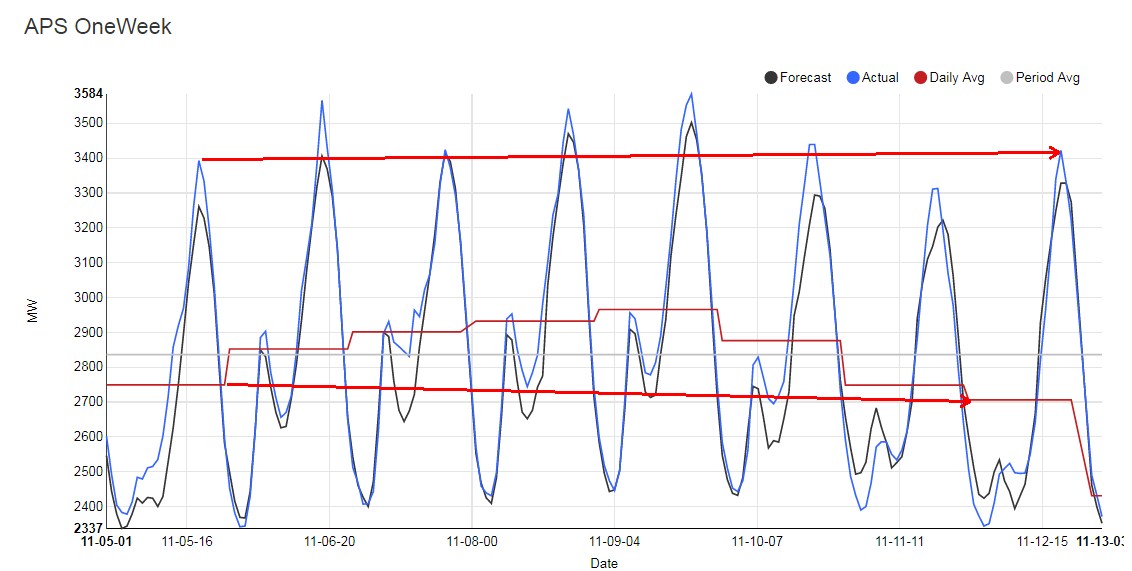 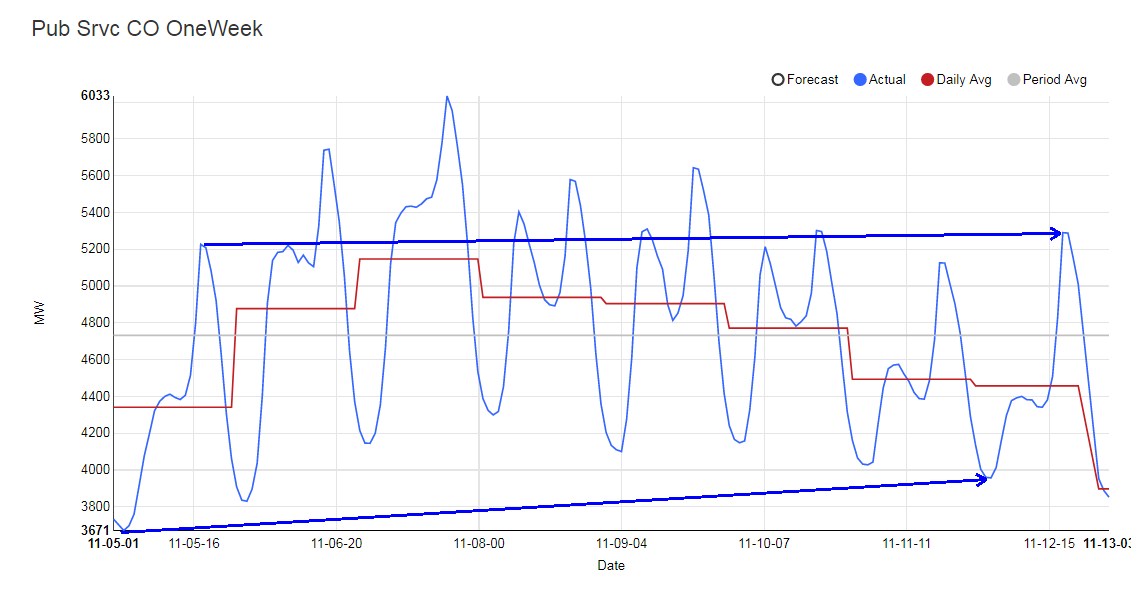 The Colorado ute’s evening peak is up just a scant bit, but the nighttime has rallied sharply — winter isn’t coming, it’s here. 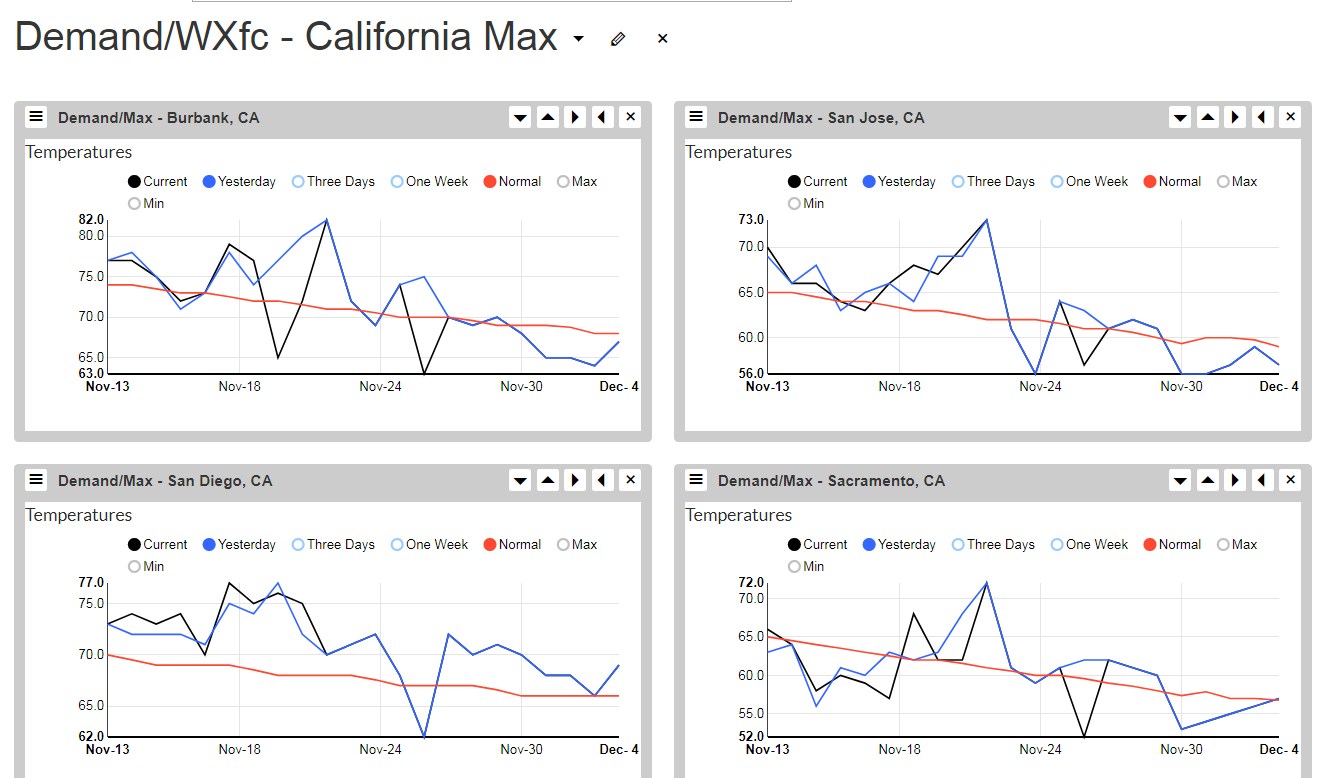 And the Golden State is just normal which is a word not often applied to that place. 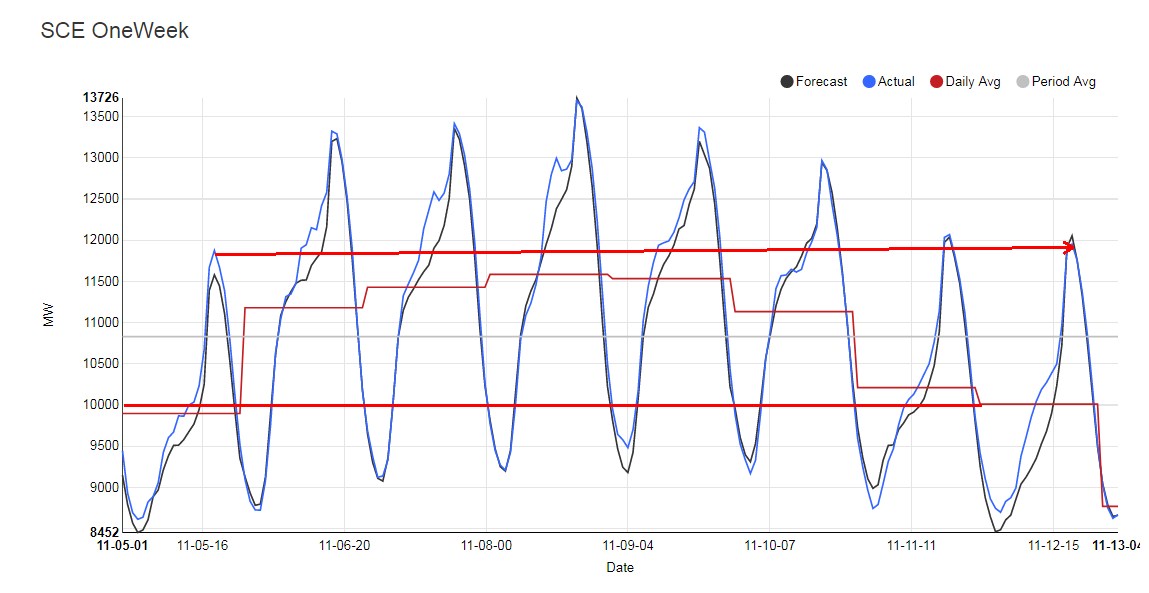 The WECC interior is seeing modestly cold weather, low 30s, in the evenings, but the afternoons are mild. California is temperate, too, so was the Northwest. Bearish realized weather suggests there is only one direction for this to go – bullish. It may, we don’t see signs of that in the south, though there are northwest hints in the strip of forecast days which have next to zero reliability. 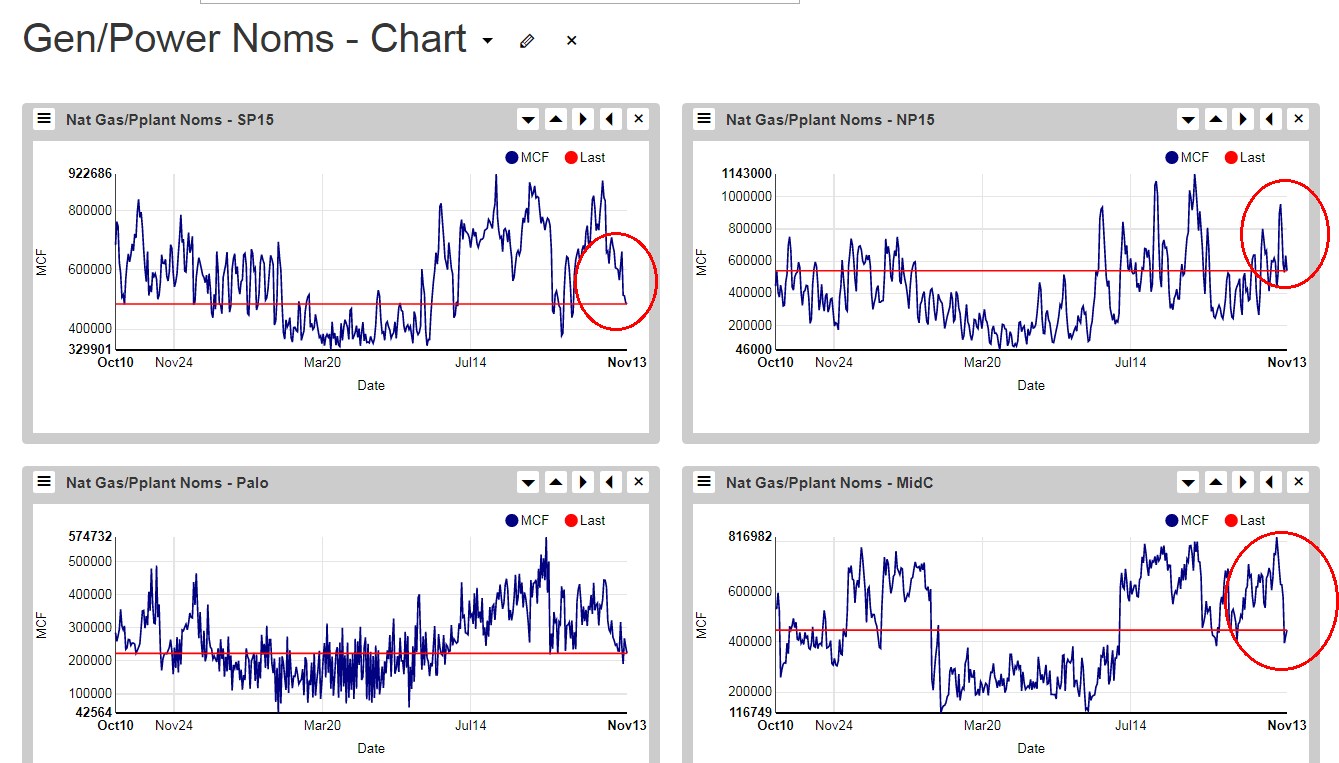 This is a first — every hub’s gas nominations have collapsed; endemic to a very bearish market. Even the staid MidC has come undone at the seams. 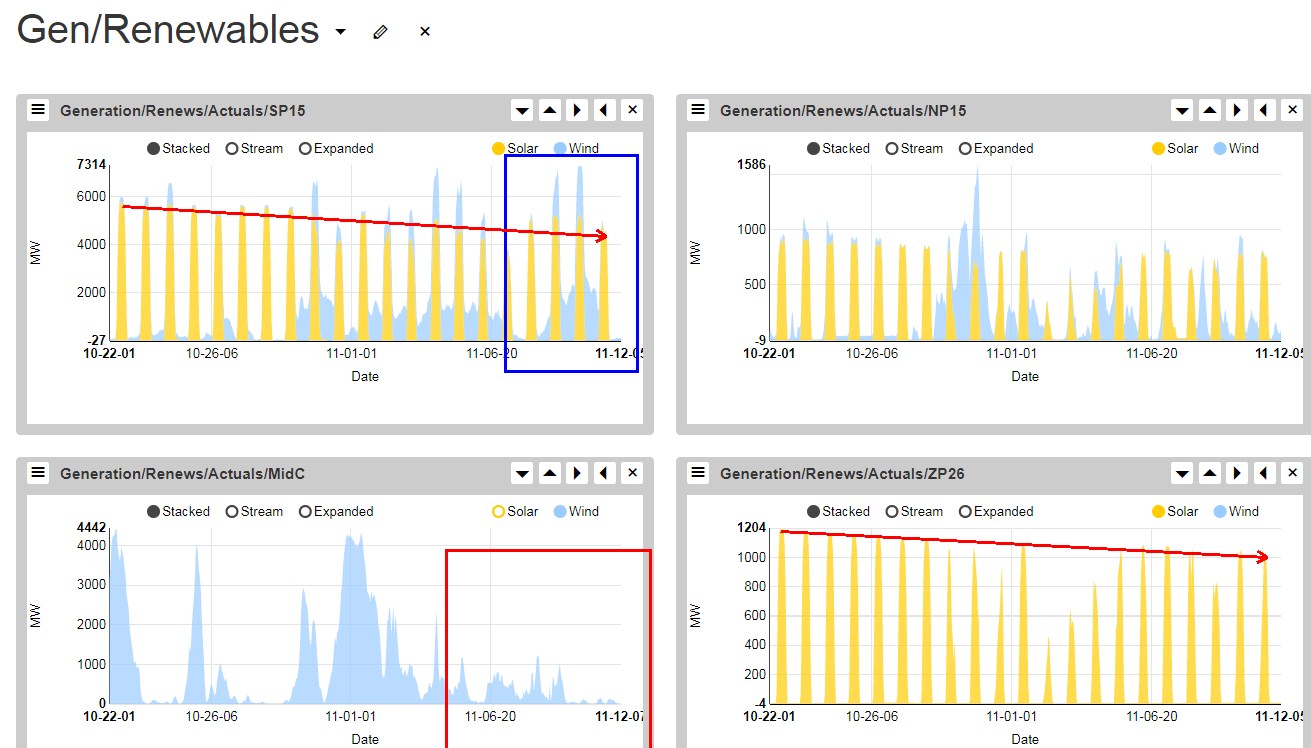 You can’t blame MidC’s woes on the wind; it’s windless in the Northwest. Socal, however, saw a sharp rally in its wind energy but that is offset by cuts in solar.

The Palo nuke is back and running at 100% which may explain the New Harqualah haircuts: 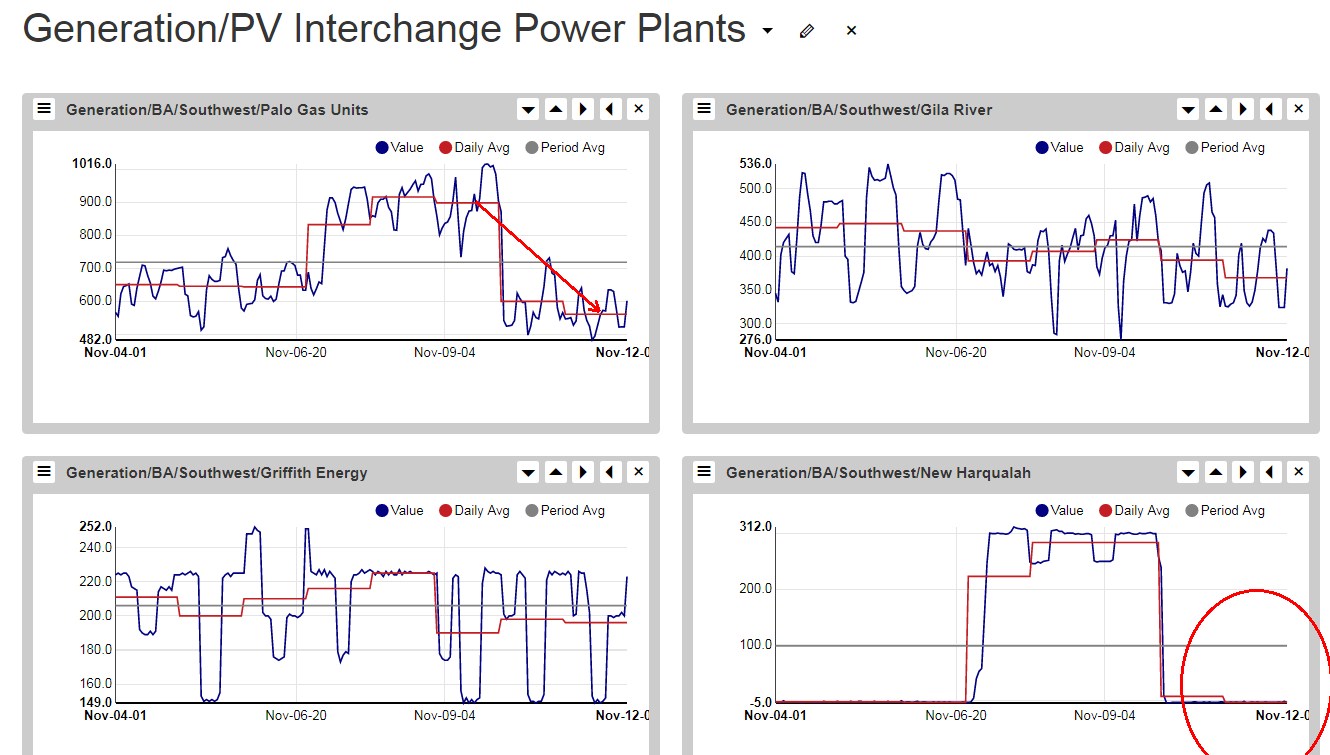 That plant is outputting zero, nada, no megawatts. Maybe it’s in maintenance, we doubt it; more likely the capacity/energy is not needed to serve the micro-loads in AZ. 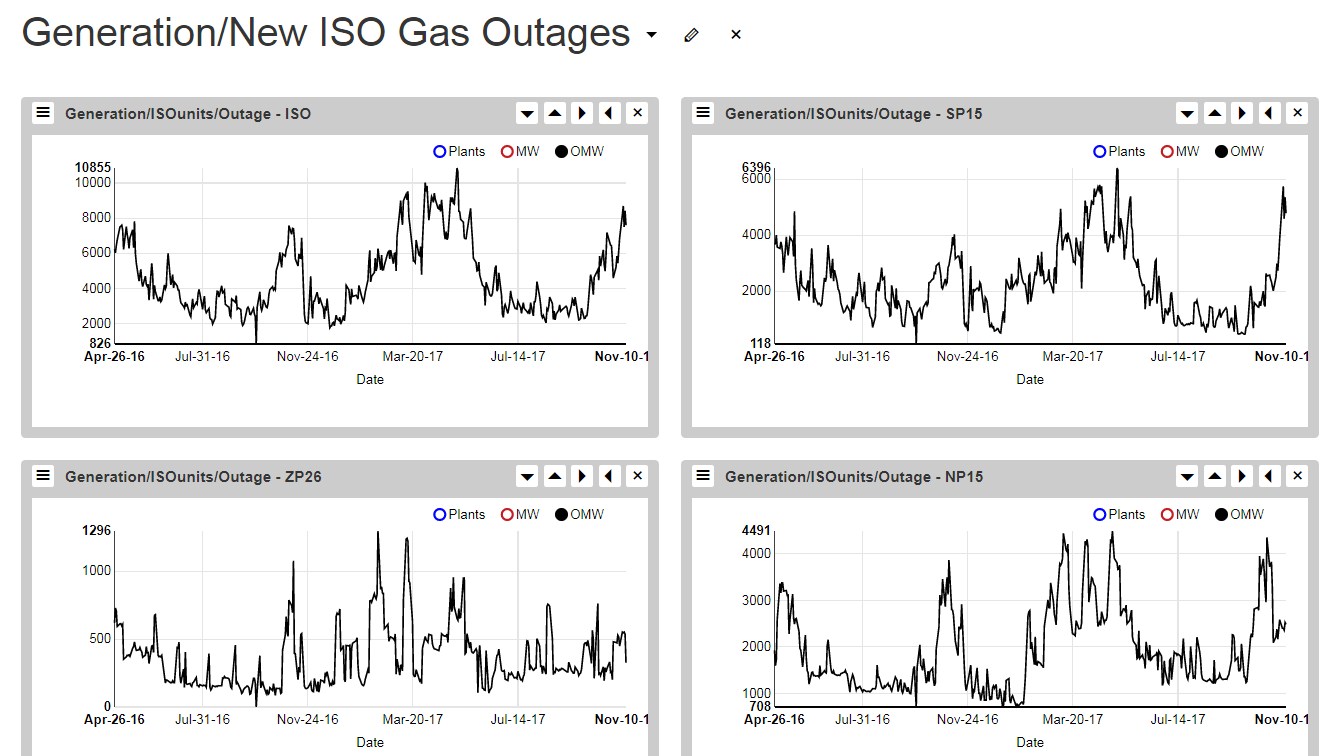 Gas outages inside the ISO are down a bit, and we suspect we’ve seen the top as the state braces itself for Winter 18.

Another modestly bearish driver on those CA LMPs was an uptick in ISO hydro energy; this is one of the rare times over the last four months we’ve seen an increase in production.

Some of that can be explained by the recent rain, plus the Pit River suddenly went baseload; for the last three months that collection of plants has cycled in sympathy with solar, not now and we don’t have an explanation. Back to the rain — check out the surges on the Yuba and Consumnes. And the state is staring down its first significant rain event of the season:

Over three inches of rain which will increase production of energy this week, all week long, as the water works itself off the hills. Some will be caught as snow, but temperatures are too warm below 5000 feet, and most of that will come down as rain. With nearly full reservoirs, all of that natural river flow rally will be passed through the turbines.  Oooh, bearish. 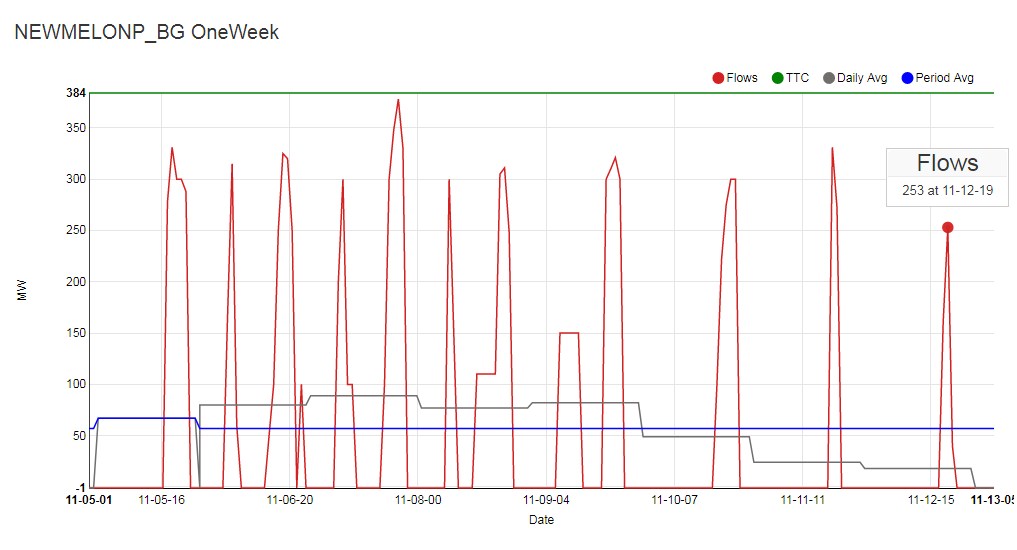 We thought this plot to be interesting; it is transmission flows out of New Melones and shows how that plant is operated. Over the last two days, it wasn’t run 22 hours, and just in the hours, 20-21 did it generate.

Northwest hydro energy as reported by the COE is off from a week ago, despite Coulee drafting:

We suspect BPA is making a hole in the reservoir to catch some of the significant rain heading its way:

The west-side is poised to realize five inches; even the desert-like east side will get two inches, and most of that comes down as snow. Plus, there is another system building in days 15-21 all of which suggests a big start for WY18. Next week we’ll start looking at water supply, for now, it doesn’t matter a lot. 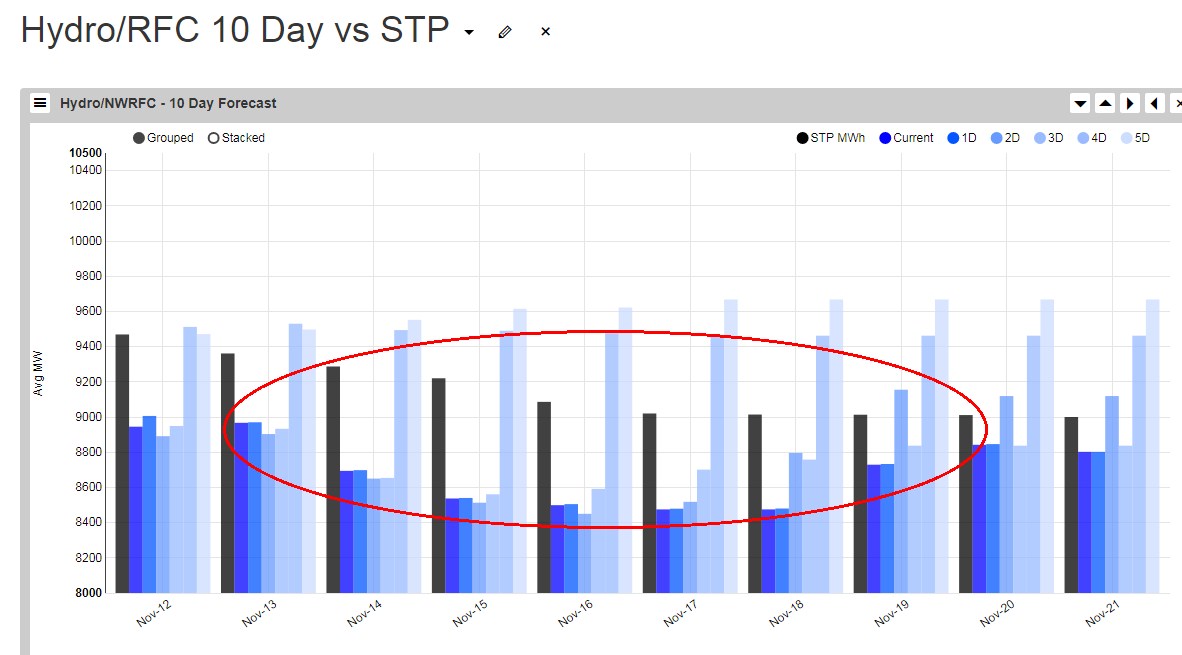 The River Forecast Center is up to new shenanigans; now they’ve gotten bullish on Mid-C and cut their flows, versus last week’s STP,  across the ten day. Might bode bullish for today’s STP, except the region is staring at a huge rain event. Why the cuts? Plus the demand forecast for next week rallies sharply, plus there is significant precip next week. Why the cuts? We think there is a Volte Face in store for our dear friends in Portland and would not be surprised if Nov shows a rally, not a cut.

The reservoir report is notable because this is the first time in six months that BOTH BC and MidC are below average, in total. That is bullish for the term if it was dry; it’s not, and those anomalies will quickly fall to the wayside off of the big rains.

The Canadians pounced on cheap MidC and became net buyers. The AC exported at TTC nearly every hour over the last week reflecting those $15.00 cash spreads. Palo cut flows, and you could have grabbed Path 15 with your bare hands and not felt anything.

The line returns this weekend, the DC that is, at about the same time as the AC quits its maintenance. The Northwest will become an exporting machine, burying the Golden State in energy and those $15.00 cash spreads will become a thing of the past — so will the SCG hype since there will be nary a gas turbine running in LA.