Every Monday Ansergy walks through the front of the curve looking for opportunities for our hedger/trader clients. We just redefined “Front” to include July and in, given that the status of the water year will, and should, bias the spring and early summer months.

The above table is from our APT report and is sorted on Rank and filtered on AGG = “M”; meaning it is all the monthlies. This is a WECC recap, click the URL to load the report where you can filter on a specific hub/derivative type/hour type/ or period. 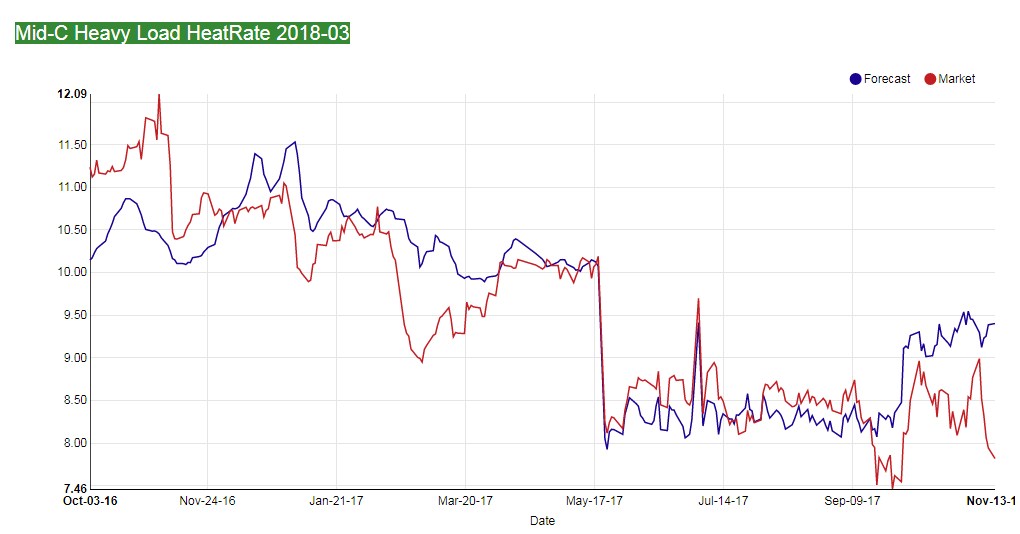 This March MidC onpeak hit a contract low several weeks ago, then rallied sharply. That low was set before anyone had any inkling of WY18, today we have an indication, but it comes with a dearth of conviction. Now the market has re-scorned March; it pounded the month towards those lows. We don’t feel that is justified; there is not a lot we know about this water year. That said, our biased, given where today’s snow levels sit, would be slightly short but that will change with the rising/falling snow anomalies. 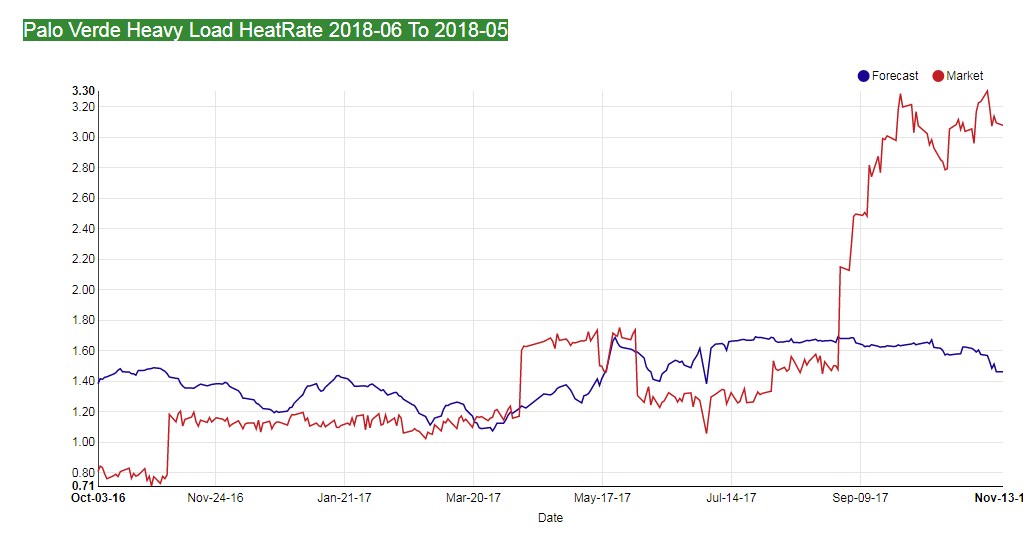 We don’t particularly like this product but found the September rally singular. This roll is driven off of 2017 valuations which were driven off of extreme Phoenix heat in June. The market is saying “deja vu all over again,” but we’d caution against that conclusion. That said, there is nothing in the near term that will pop the bubble.  We’d guess it settles in the mid ones, but you may have to wear it through the end of June to get paid. 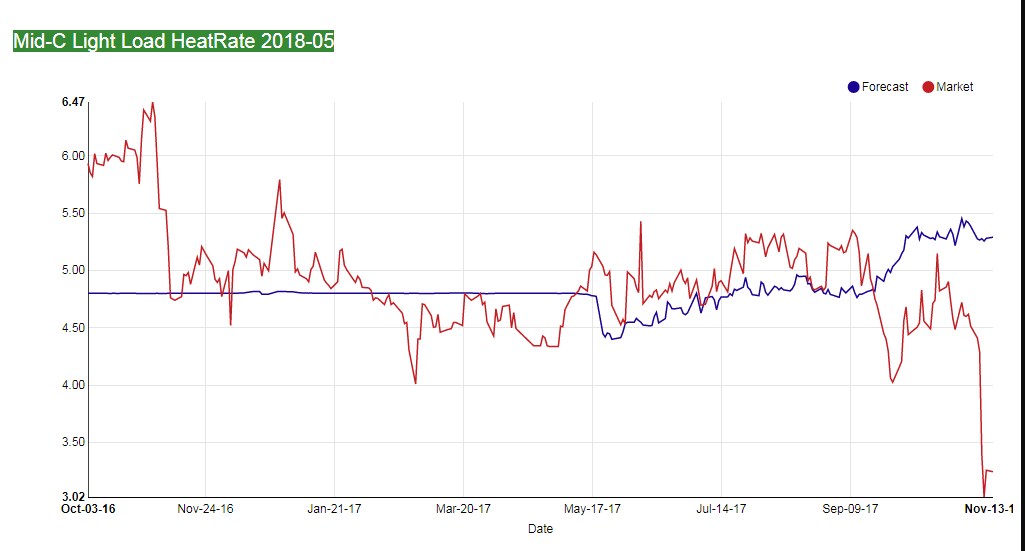 Wow, Mr. Market got a hunch and shorted a bunch the May off-peak; he sold it right through value, and now this screams buy. What do we know about May, or even spring, for that matter? Not a lot. We know there are some positive snow anomalies in the Northwest; like there is 4″ of SWE and normally there is but 3″ on Nov 11. OMG, right? Wrong, by the time the build ends for WY18 there will be 40″, we are barely 10% into the year. Way too early to draw a line in the sand — we’d buy this. 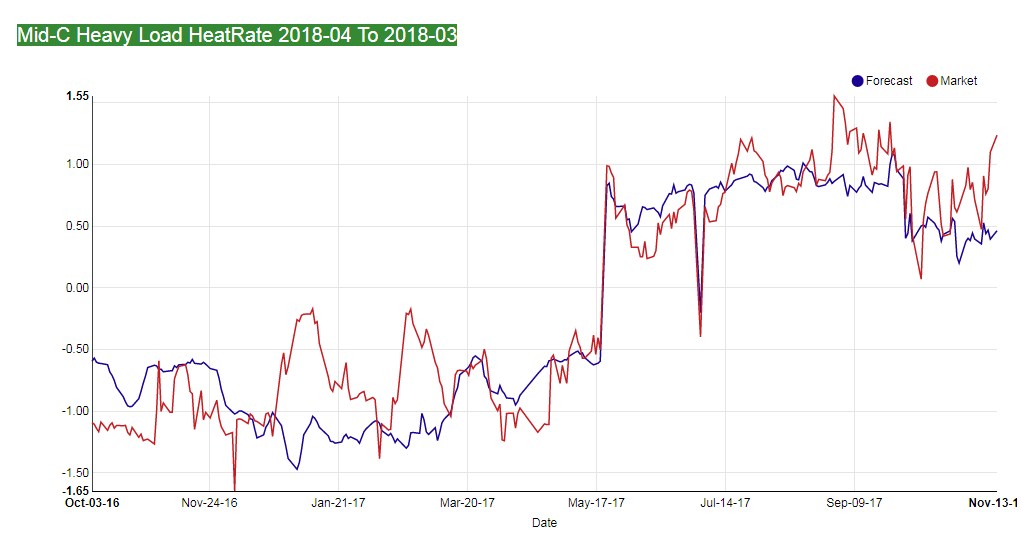 The April-March MidC roll realized a paradigm shift in value last May in response to a once in ten year settle off of 2017 cash.  Betting that will happen again? We’ll take the other side and be right nine out of ten times. 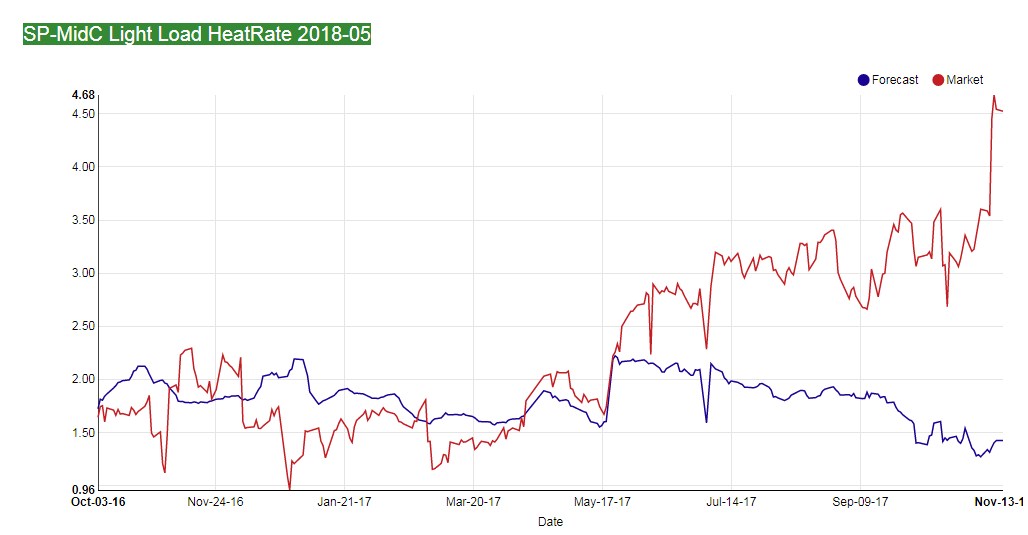 The May spread for off-peak is suffering delusions of grandeur; this has now officially reached blunder levels, and we’d take our blunderbuss and blast it back down to where it belongs. 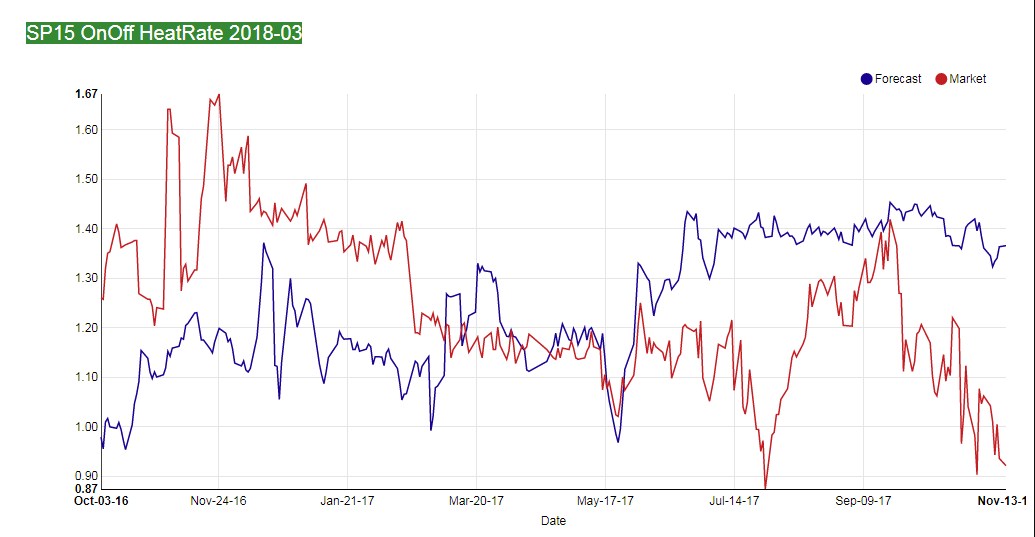 The market hates off-peak at SP, after all, it is off, not on, and should be worth less, but should it be worthless? Last time Mrs. Market felt this way Mr. Market told her she was stupid and it nearly doubled in value; now she’s at it again.

In the next grouping,  we re-sorted descending on WoW (Week on Week change in rank) which puts the most prominent moves towards attractiveness at the top. 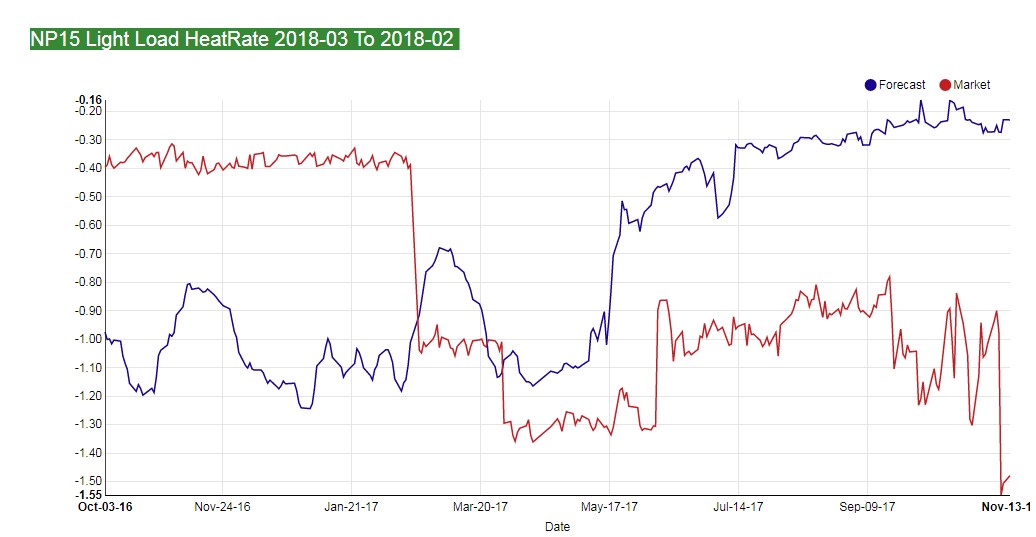 Well look at that, a contract low as the market suddenly drew new insight into the relative value of March and February NP15 light load; where do you suppose it got that new conviction? Ouija board or dice, most likely. We’d fade. 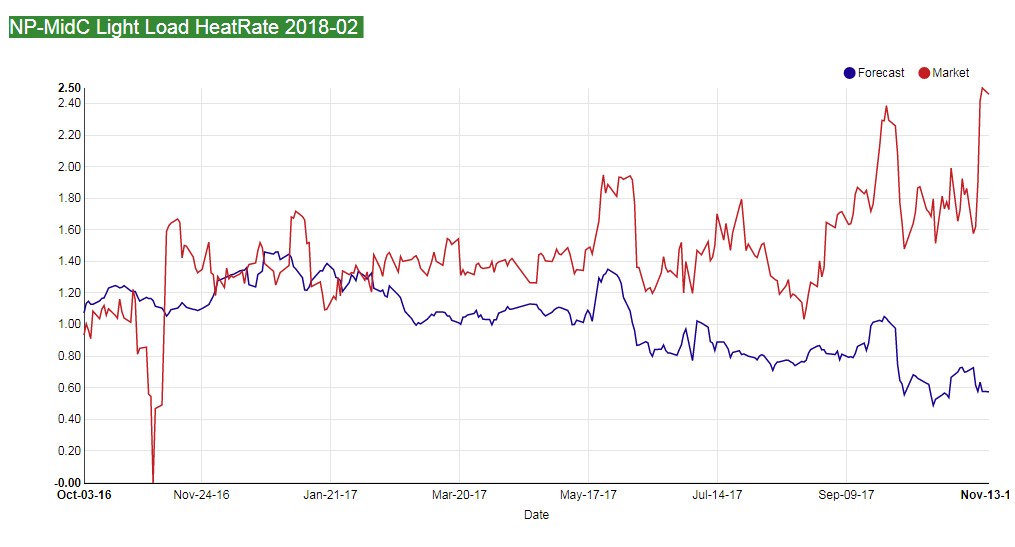 And of course, whenever the market makes a stand on one locale the related derivatives are likewise affected. Here we see the spread hit a contract high off of perhaps last week’s $15.00 cash spreads. Bear in mind that last week will have zero impact on the February markets and also remember that last year the Mid-C realized a tremendous amount of early winter runoff from low-level snow melt. That event was a one in fifteen-year phenomenon, don’t count on it repeating itself. In fact, there is as much chance the Northwest will see a Siberian Express in February as there is another record Feb runoff. 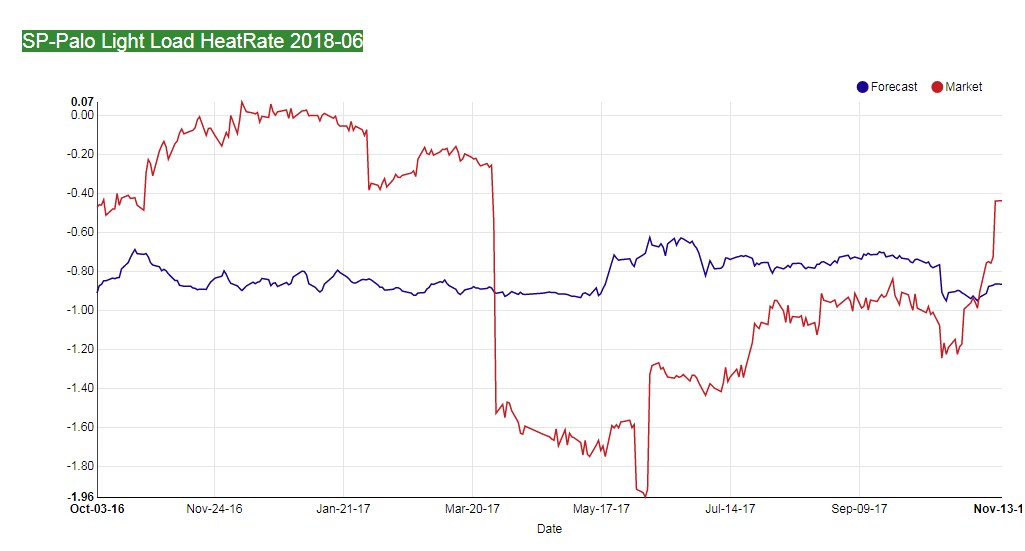 We’d not suggest trading this, from either side, but post it as an example of markets reverting to mean. Check out the rally since last May, a near doubling, and now the market is back to loving on the SP at the expense of the Palo. But it gets hot in Phoenix first, and we’d expect this roll to crater on that first 100-degree day in Sun City — but that won’t happen for months; meanwhile, we’ll watch and see if the trend is your frienders push this up much further. 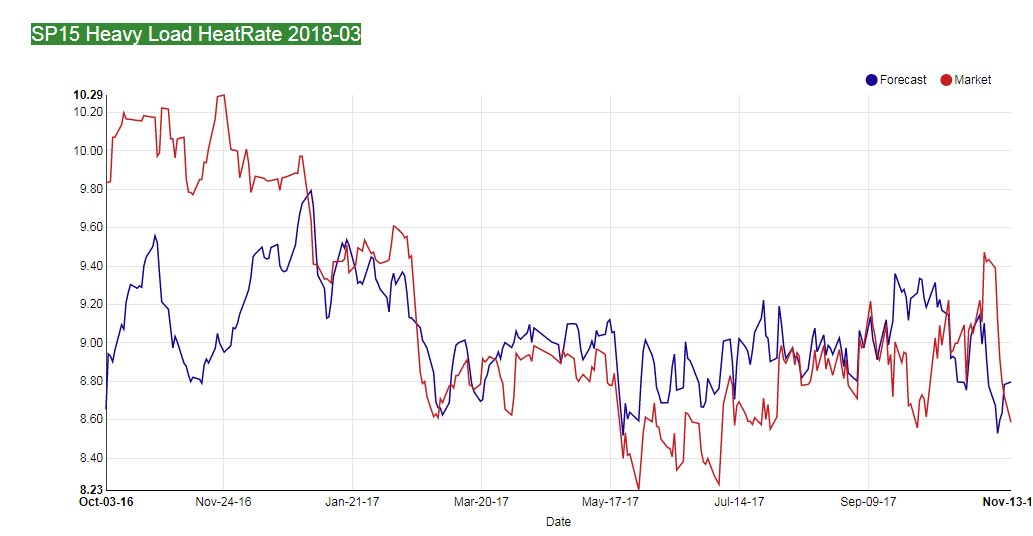 We haven’t been able to put the two words “BUY” and “SP15” in the same sentence for a while, until today. The market has pounded the March into a range where we’d now own it. 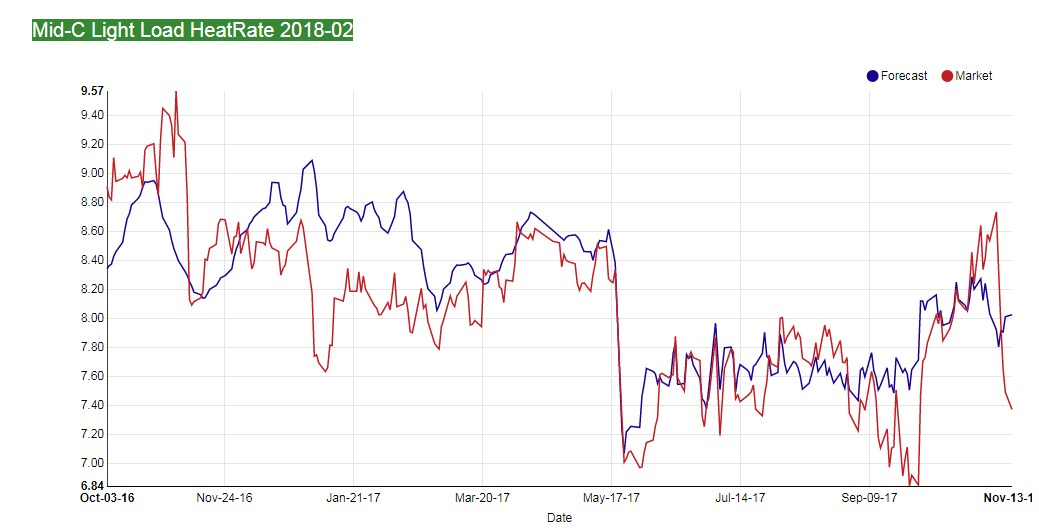 The Feb MidC light load is becoming compelling, again, from the buy side. If that day 10-20 cold comes to fruition this will be a winner, from the long side. 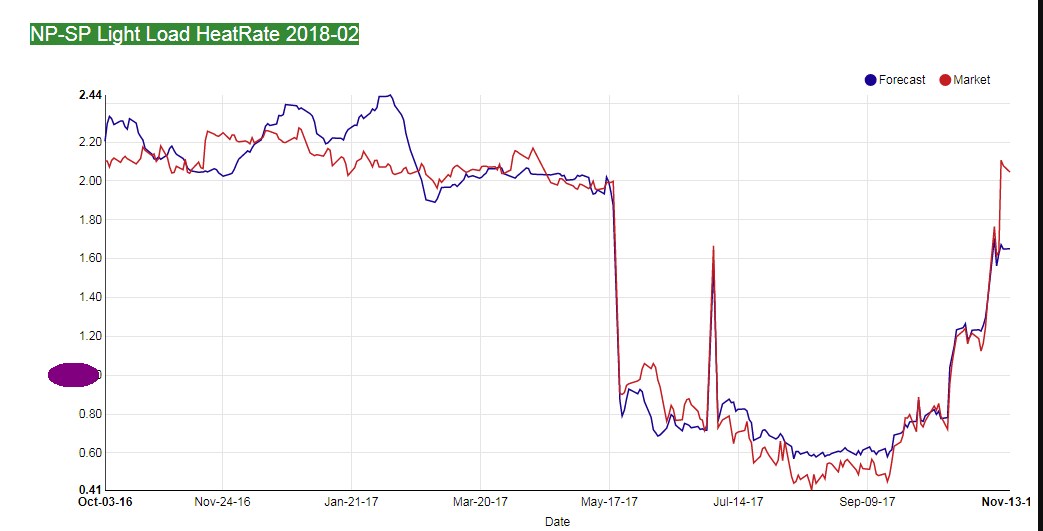 More mean reversion; the spread inside the ISO has gone nuts and  now is back to being a short.