The talk of the market is the $4.50s trading in Socal Citygate for December; that high gas price has driven the Dec SP to $45.00. Let’s talk about that, before jumping into the fundies.

Spot gas clears $4.41 for today while PG&E Citygate settles at $3.29.  A big spread and hints of supply issues inside Socal Citygate. More remarkable than the two citygate spreads is the surprising strength at Socal Border. One would think that price would have cratered, relative to PG&E, following the disruptions arising from the Needles outage. One would be wrong, would one, there is price congestion between Border and Citygate, but Border to PG&E is about flat. That makes no sense, to me, if the problem is inside Socal Citygate.

How bad are things for our friends in LA? A couple of reports will quickly shed light on their troubled future, and we aren’t talking about Kevin Spacey, either. 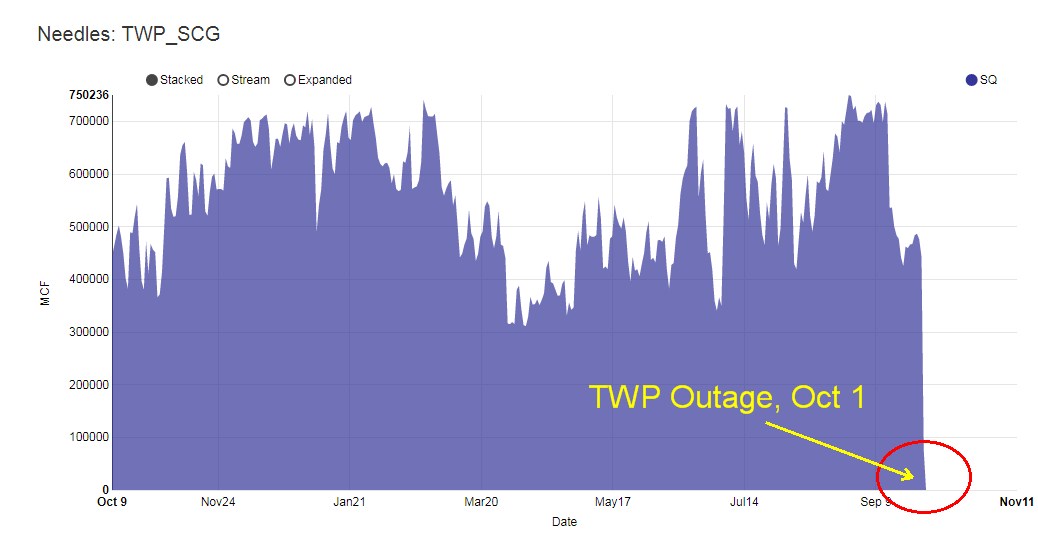 The culprit is Transwestern’s interconnection at Needles; on Oct 1 gas quit flowing, about 500,000 MCF/day went to zero.  Bear in mind; this disruption occurred when ISO loads were 10,000 MWs higher than today. How did Socal recover from this disaster, or said better, did they recover?

Oh my, look at the import haircut on Oct 1, but what follows almost appears a reversion to normal.  Flows lost at Needles were made up with increased imports elsewhere. Let’s see how Imports look compared to last year: 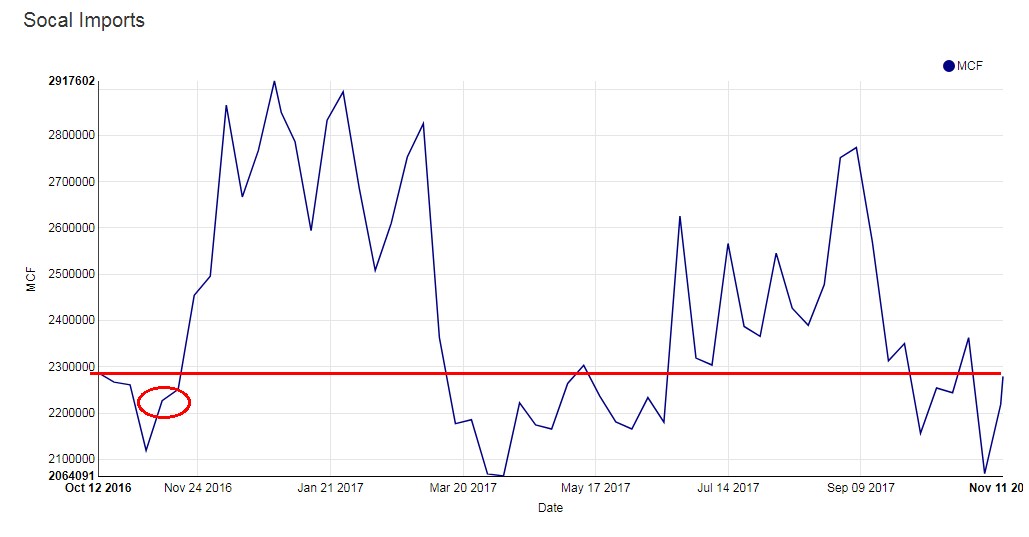 Uuuhhhh, (and LOL), they are higher than last year despite losing Needles. But there is a big problem inside Socal Citygate, right? Needles is down, but Imports are up. Must be all coming out of storage, poor SCG has to pull from its storage before Winter arrives, right?

LOL, again; Socal isn’t pulling, they are injecting like Armageddon is a day away, and set a year-long high for injections today. I don’t claim to be a gas guy, but if there is such dire supply constraints wouldn’t it be difficult to find the gas to inject? The argument, I suppose, is that “Winter is Coming” and despite the $4.42 spot price the utility is doing the prudent thing and filling storage as fast as possible. But what if Winter doesn’t come?

Total storage is way below the years 2013-15, but it is nearly a BCF over last year’s levels. Last year, Aliso Canyon was shut-down, more or less, this year it is operating albeit reduced injection/withdrawal capacity. But if we made it through last year, what’s different this year? Sure, Needles is down, but for how long? And even if it doesn’t come back, hasn’t the shortfall more than been made up by increased imports on the other pipes?

We aren’t gas guys, already said that but want to emphasize the point. That said, we are sniffing some hype here and would be cautious about being naked long SCG gas exposure in the mid 4s, at least relative to the rest of the western gas hubs.  Ultimately, the 4s will be justified if Burbank drops to the low 30s for a couple of weeks; if it doesn’t and the LA basin remains at or above average there will be some fixed price pain, we think. 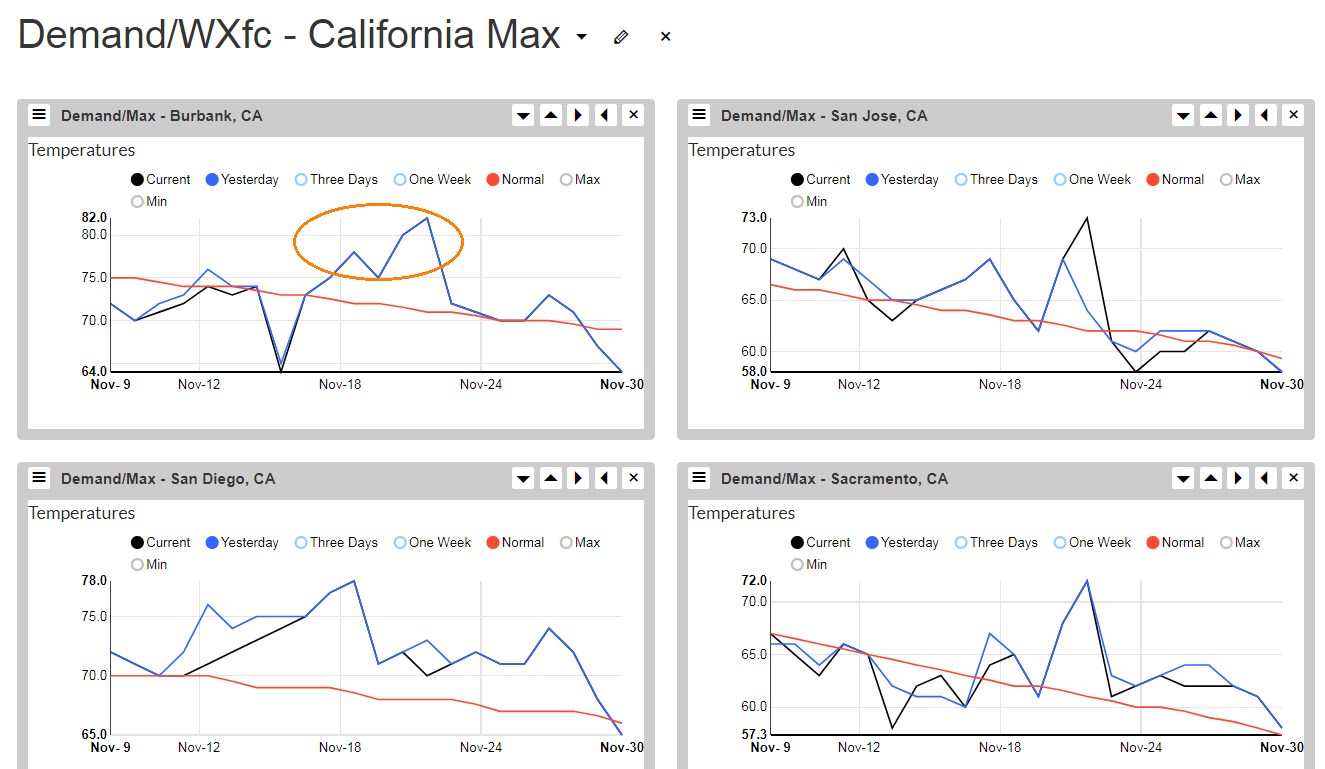 No 30s for the next two weeks in LA, not even up north. This is a very bearish ISO forecast; most days/cities are above average. 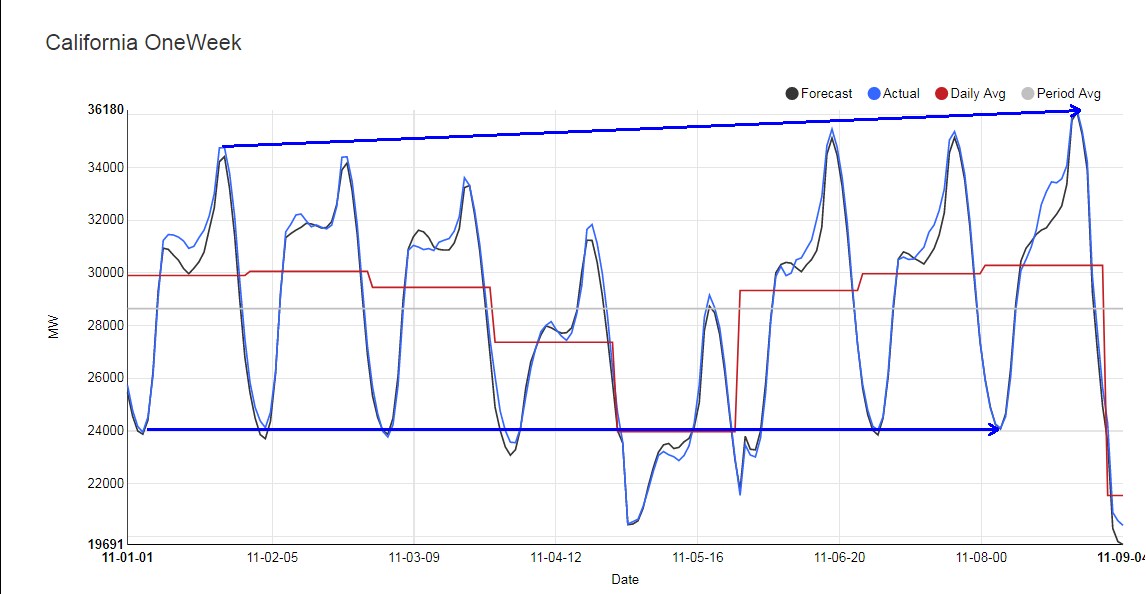 Loads, surprisingly, have ticked up but we are talking rounding error moves; contrast the above “rally” with the 15,000 move two weeks ago. Rounding error. Interesting to note that the bottom is sideways. 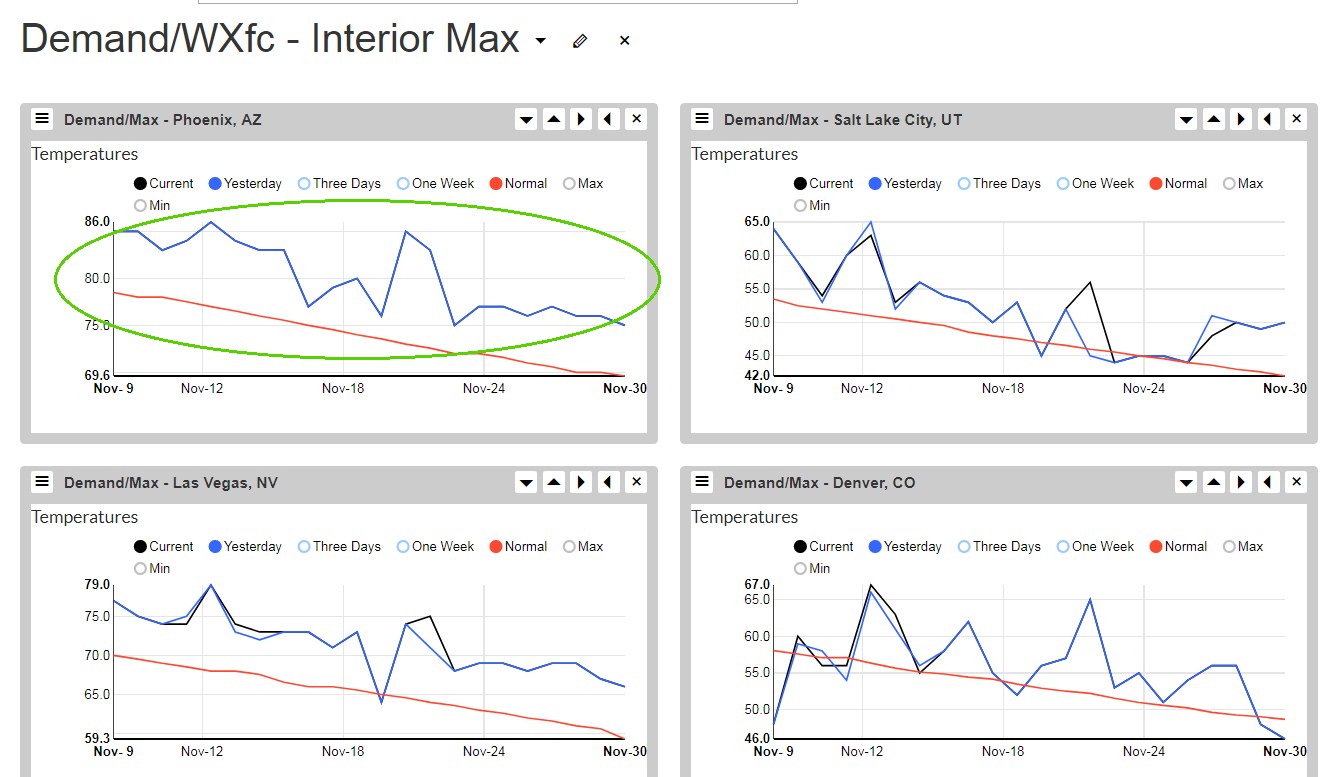 The interior is a mixed bag; Palo will enjoy above normal weather for the foreseeable future and the air conditioners will continue to condition the air, though for just a few hours and won’t work too hard. The rest of the interior is just bearish with above average temperatures in the midst of the heating season. 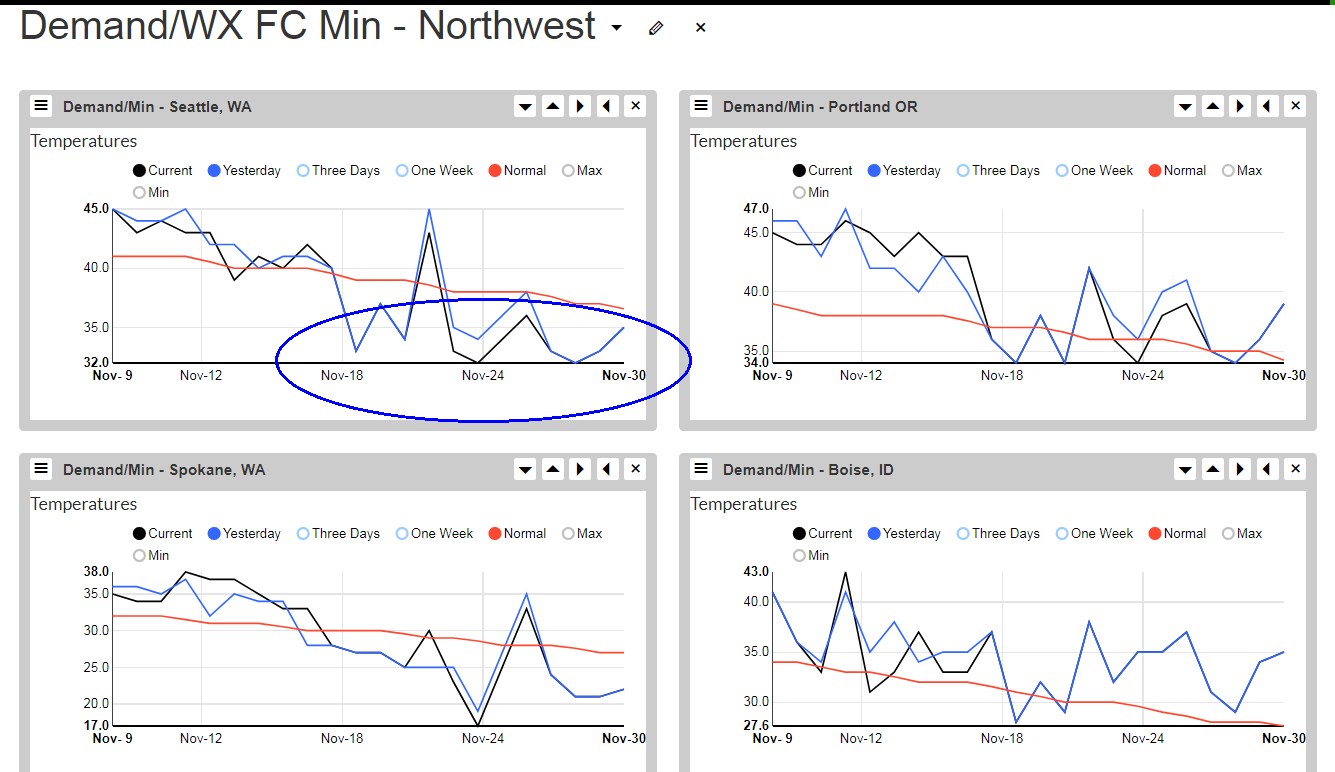 The Northwest is a different story; Seattle is staring down some very chilly weather, and we aren’t just talking about a day or two; there is a ten-day strip of below normal temperatures. All of those cold days take place when both the AC and DC are back to 100% capacity:

So add 5000 MWs of demand, then add 5000 MWs of export capacity and what do you get … 10,000 MWs of Net Demand (potential). I call that bullish and would expect to see the reservoirs hit very hard for the balance of the month. For now, everything is relatively mild, but loads are ticking up. 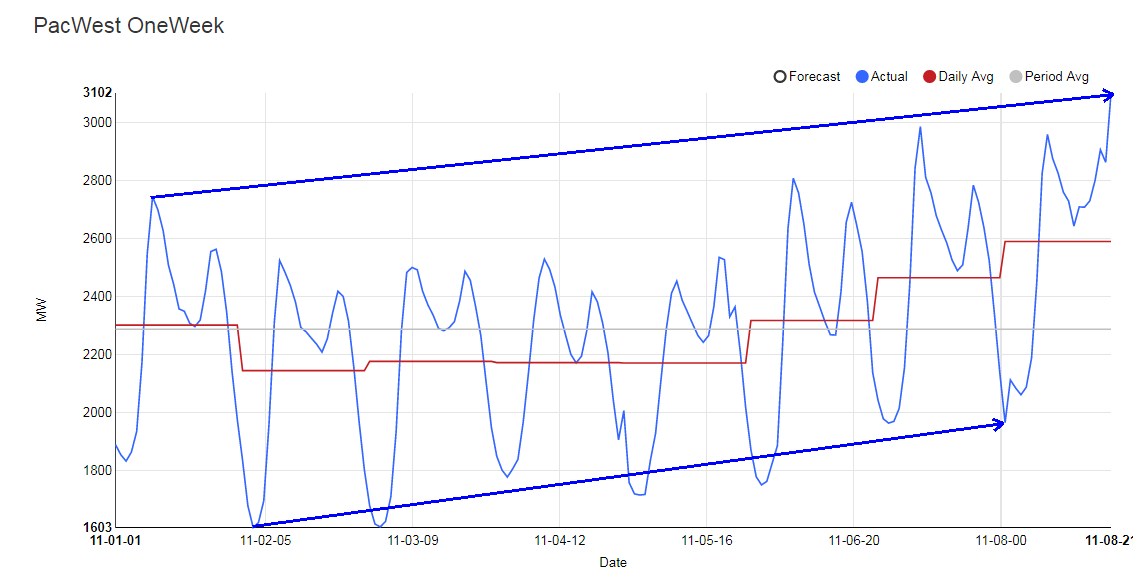 Pac West is a good proxy for all of the Mid-C since the large utility serves both west and east side customers. Both the peak and troughs have rallied, almost in parallel. 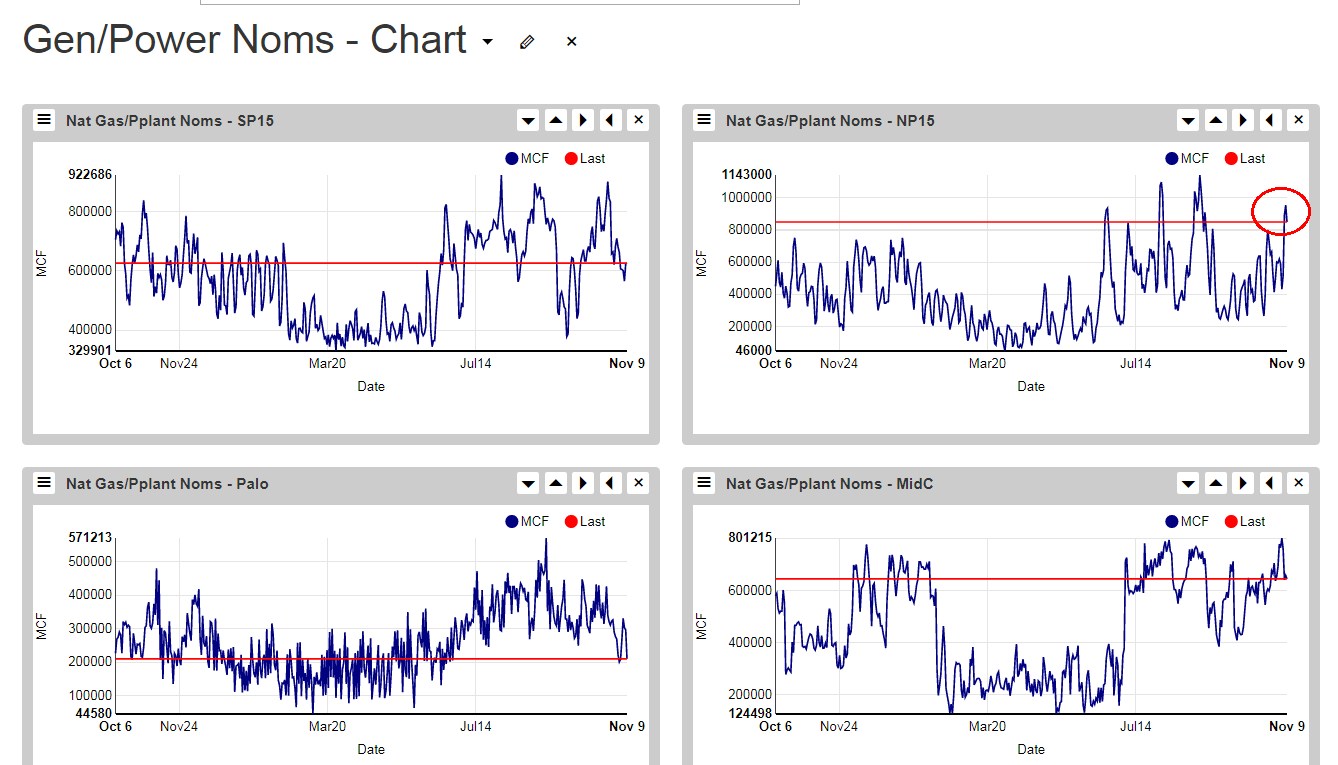 The big surprise in Nom Land is the rally at NP15. This is not driven by surging loads caused by plunging temperatures; we don’t know what’s pushing it, but throw out a couple of ideas. (1) ZP quit sending to NP: 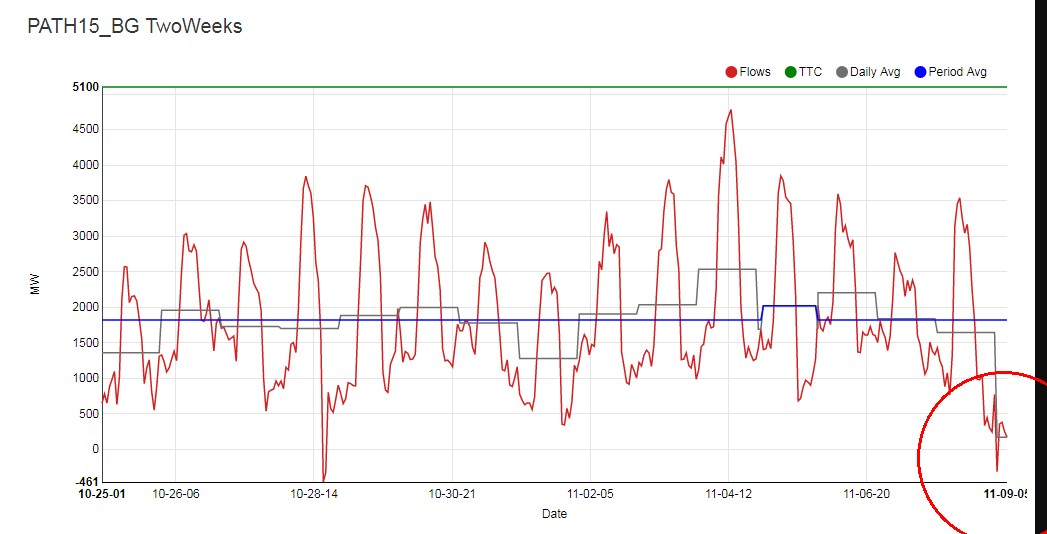 That 2000 MWs needed to come from somewhere, how about the idle turbines? SP15 would prefer buying power versus generation its own as it husbands its scarce natural gas in anticipation of the White Walkers arriving later this winter.

(2) – NP15 hydro is cratering like Trump’s approval rating and Kevin Spacey acting career; that loss of hydro energy is made up by gas turbines.

(3) Imports into California are off, and NP has become the swing resource:

Back to the Socal Gas thing; if SP15 is under such dire stress because of Aliso/Needles/Spacey, then wouldn’t it turn to its neighbors and buy more power; shouldn’t the lines be full? They aren’t, net imports into the state are approaching all-time lows, and this isn’t just because of the DC being down – note the blue circles, those are same Day of Year and the DC was down on those days. The state is importing less energy because it is generating more on its own, like the big boy it finally has become. 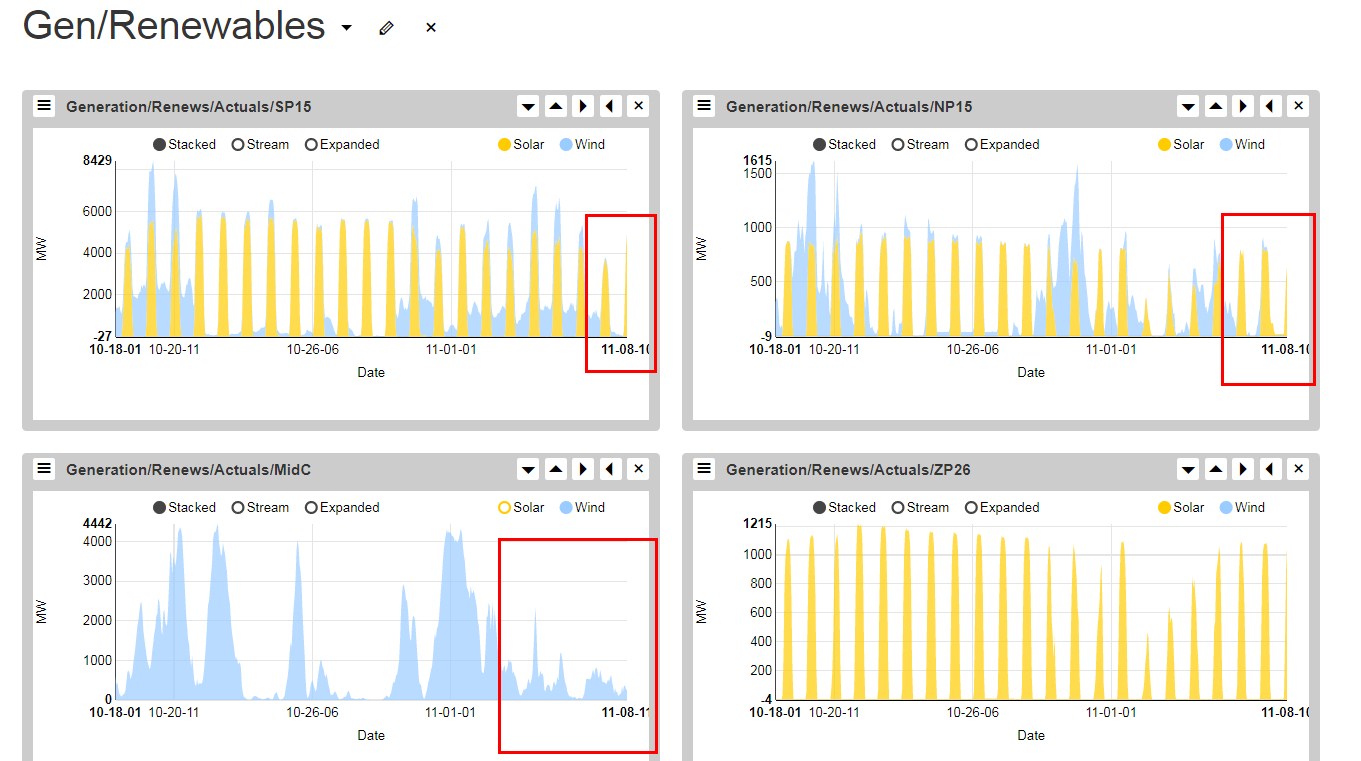 Here’s some bullmeat to gnaw – there wasn’t any wind over the last couple of days. 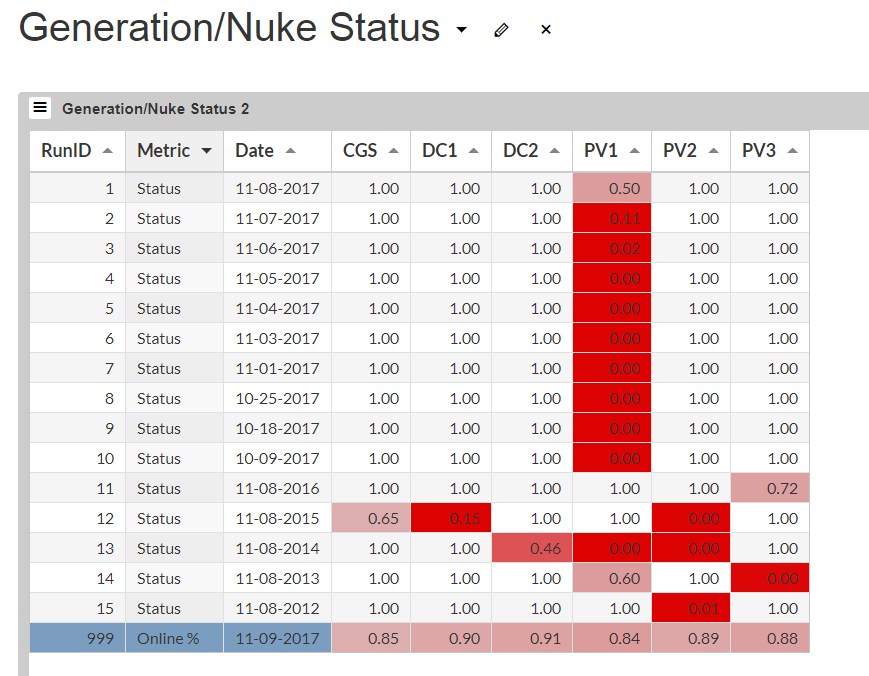 The above reflects Monday’s STP forecast and is worthy of a few comments. What gives on January 1? That rally in energy looks like the Dec Socal gas price. All we can come up with is the RFC’s model knows January will generate more power, so it has to pick a date to start that increase – why not on a Holiday when everyone is hungover and watching football? 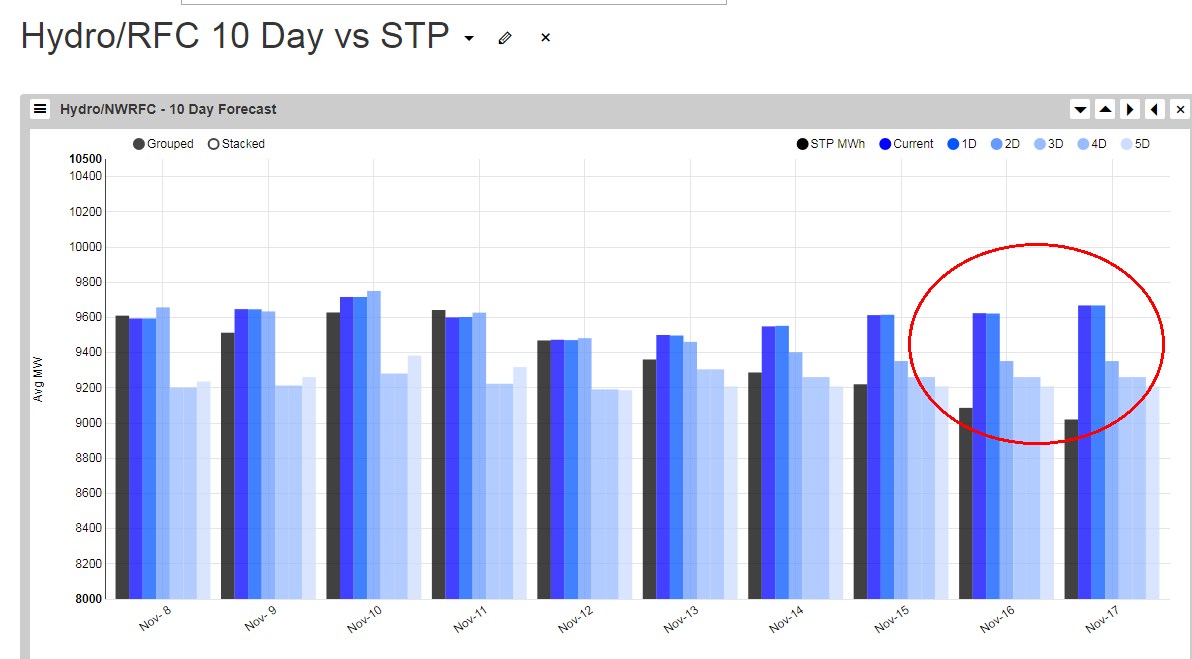 Not a lot of “tells” in this report, but check out the rallies at the tail end; we think there are more rallies to come given those cold days expected to arrive just before Thanksgiving.

There may also be another significant rain event in the 11-20 day outlook. This one would be bigger than the current, also note the Mid-C composite for days 1-10 is above average; this implies 20 days of above normal Northwest precip. … hmmm, the plot thickens.

Alas, the Golden State stays mild and dry. Nary a raindrop to be seen after tomorrow. CDWR understands this too, and is backing down flows out fo Shasta:

Those Shasta flows are 100% regulated and are now back to a low normal. The Pit River also caught our eye; all of a sudden the plant quits cycling and is running baseload like it is in the middle of a flood – what gives?

Flows out of Arrow doubled in the last week and those drove a stiff rally on the Columbia at the border; again, like Shasta, 100% regulated. BPA needs the water, loads are decent but growing much stronger, all of which will put a dent in total storage:

BC is at normal now; the Mid-C is below average going into Winter and in front of a potential cold event.

Coulee is passing all of the Arrow water resulting in a doubling of generation output, week on week.  We’d expect BPA to try to put some of that Arrow water back into Lake Roosevelt in anticipation of the cold.

Palo flows into Socal are ticking up while Path 15 flows crater. Not much else to say on these charts.

While the Northwest grows tighter, Socal grows wierder, but that’s not news. More on our conclusions in the APT post to follow.