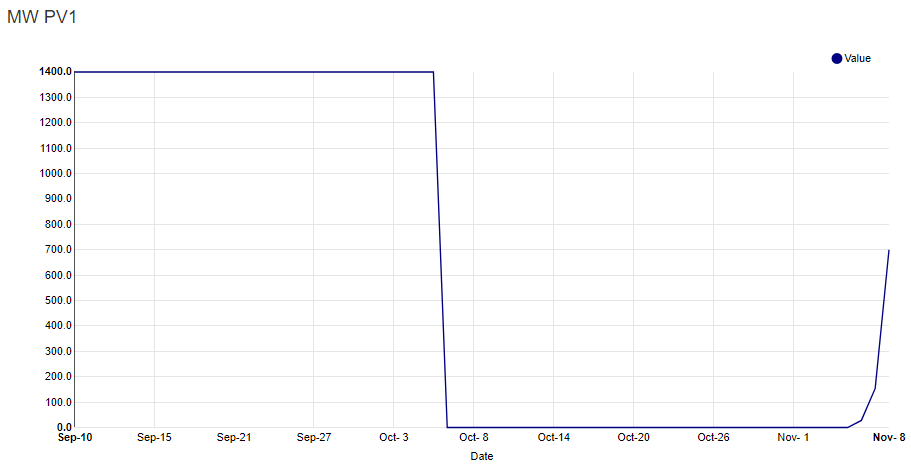 All other units remain at full capacity, which is relatively quiet compared to most years as the table suggests. 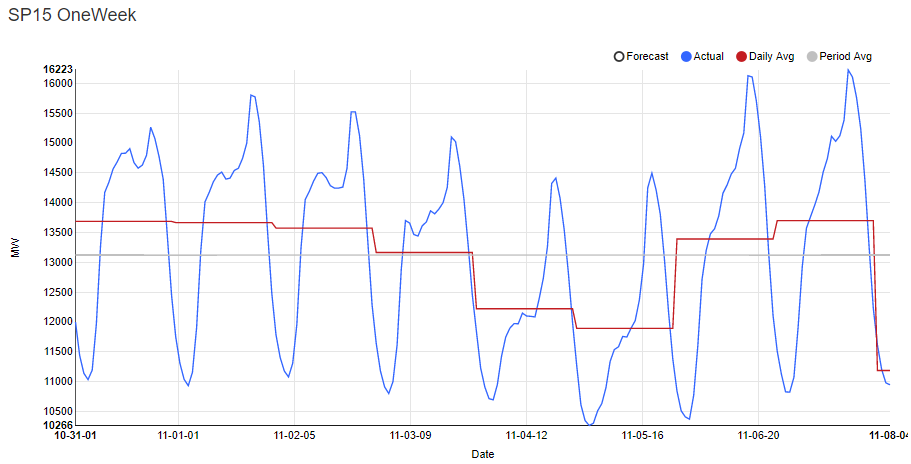 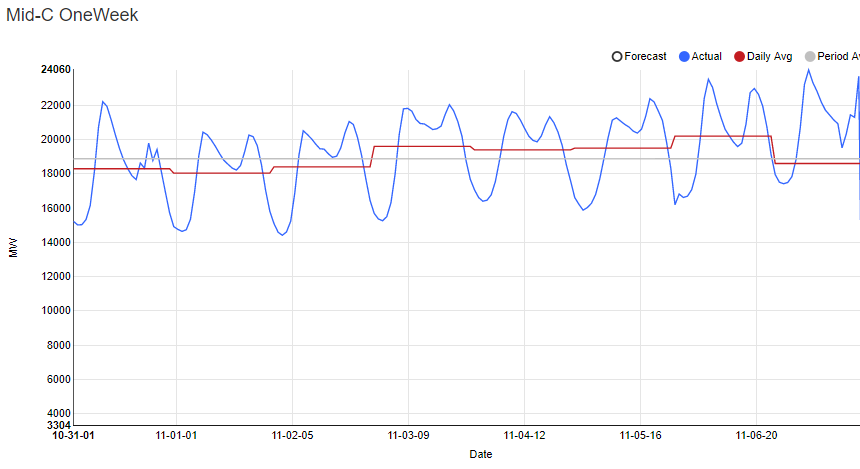 Mid-C’s topped out at 24,060 MW yesterday, a day-on-day increase of over 500 MW, and a week-on-week increase of nearly 1,800 MW.  Loads crept up continuously over the past week as cold temps blanketed the region. 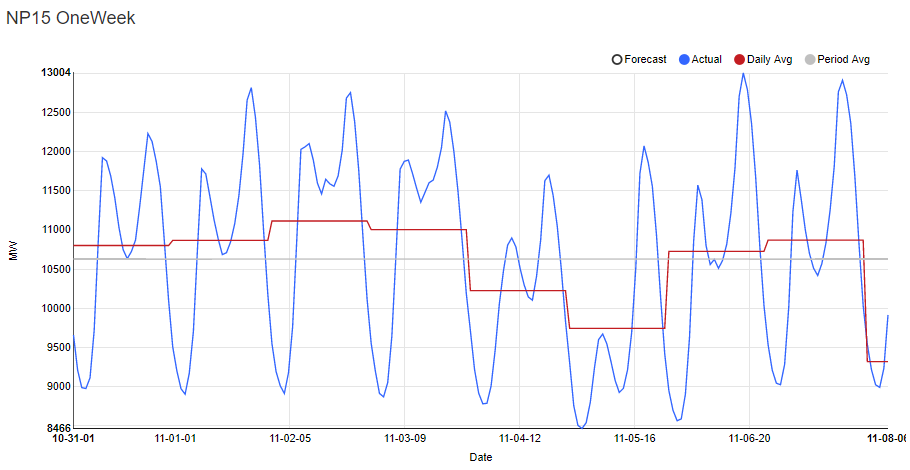 Huge swing in temperature trends over the next ten days as most stations show up warmer than normal.  Contrast that to last week’s Mid-C forecast with most stations checking in with sub-5 degree anomalies.

The warmest regions show up in the Southwest, particularly Phoenix and Albuquerque, while most other WECC stations don’t vary by more than two degrees.

If you’re looking for anomalies, Phoenix is the place to be.  Highs start off four degrees above normal today, but will reach 10 degrees above normal by the 13th with a projected high of 87.  Temps should stay well above average through the remainder of the month if the forecast holds true.

Highs aren’t reaching into the 80’s like Phoenix, but Albuquerque shows up with noteworthy anomalies throughout the next two weeks.  The 14th projected high of 70 sets its mark with as temps reach 14 degrees above normal, and should set a new 10-year record in the process.

A couple changes to note in the San Jose forecast.  A moderate warm up projected for the 16th was cut by nine degrees, leaving a forecasted high of 65 in its place.  On the flip side of the coin, the expected cooldown beginning on the 19th was entirely replaced with a warm-up leading to a high of 73 by the 22nd, 11 degrees above normal.

Temps cool off considerably when moving inland from San Jose, at least in terms of daily high anomalies.  Sacramento is forecasting a high of just 61 today, seven degrees below normal, and isn’t expected to peak above the average line until the 18th.

While warmer than Sacramento, Burbank too is forecasting below normal highs for the next week as daily highs fall as low as 70 by the 10th, five degrees below normal.  The warm-up in Northern California on the 20th looks to make its way south as well as highs are projected to reach back into the 80’s. 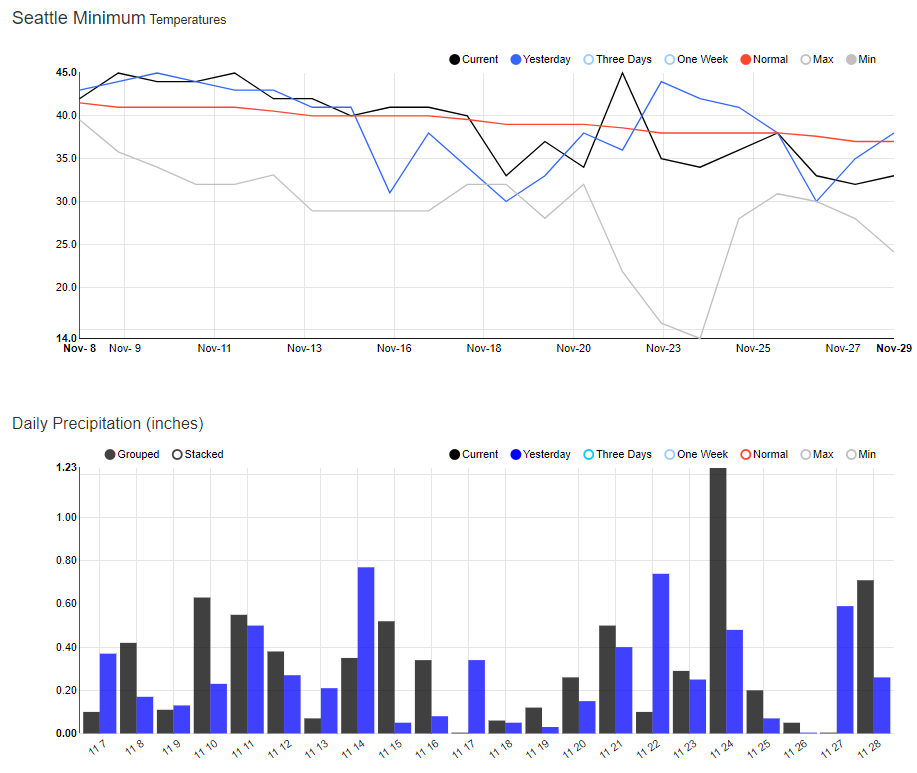 The Northwest’s deep-freeze seems to have passed by as Seattle’s minimum daily temps pushed north of average once again.  Lows will top out at 45 tomorrow, four degrees above normal, and will stay relatively elevated for another week.  Keep an eye on a potential cool down for Thanksgiving however. 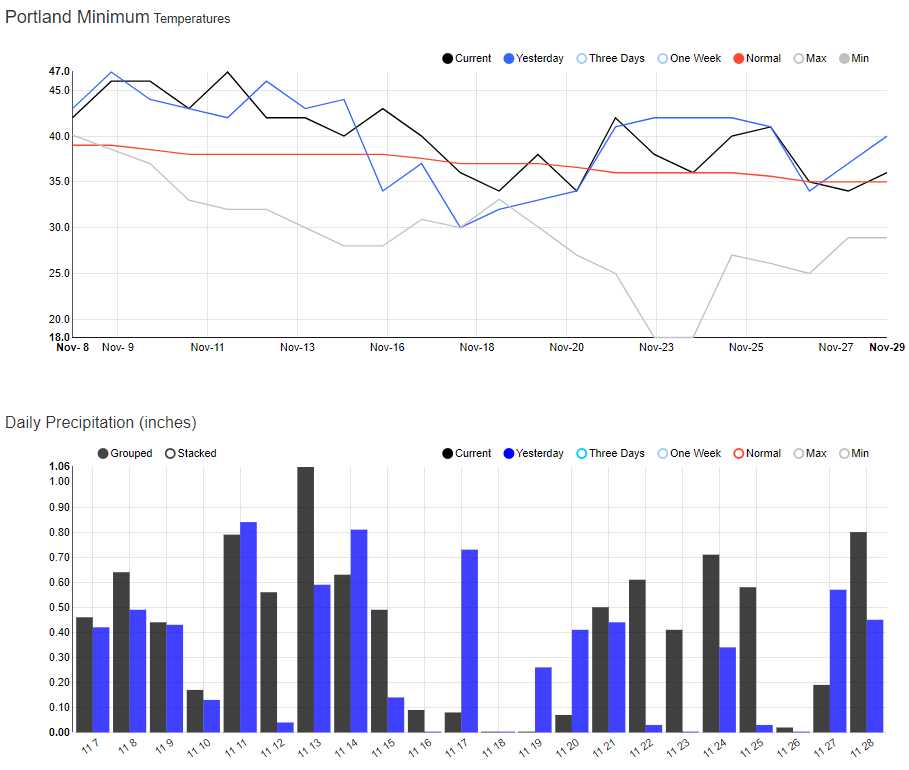 Warmer than normal in Portland as well with lows pushing seven degrees above normal in terms of anomaly by Friday, reaching 46 degrees overnight.  While the area won’t see freezing temps for some time, rain is in the forecast nearly every day.  Look for rain to especially dump on the 13th with more than an inch expected. 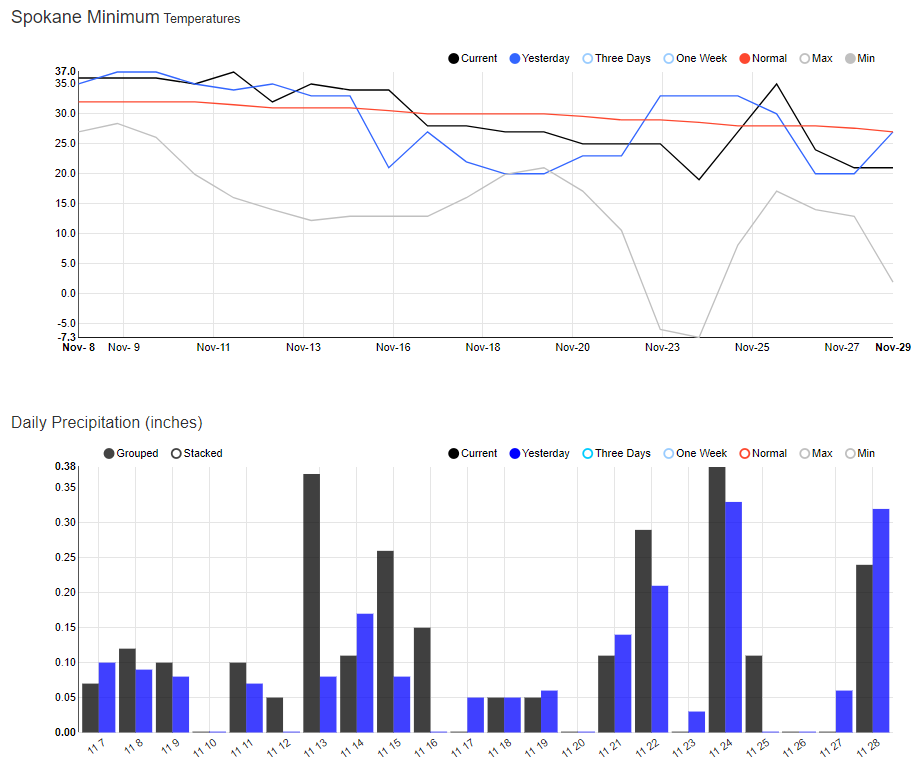 Spokane also climbs out of sub-freezing lows as today dips to just 36 degrees, four above normal.  Freezing temps aren’t expected to return until the 17th, though moderate precipitation will be present throughout the month, and with temps still well in the 30’s, most of that will fall as snow in the upper-elevations.

Salt Lake’s warmer than normal average daily temp anomaly is showing up largely thanks to elevated daily lows.  The 12th shows up with a low of just 41, nine degrees above normal, while tomorrow dips to just 42.

Today’s update to the 10-Day Forecast included a 180 aMW decrease on the front end followed by steady a decline through the remainder of the ten days, an overall drop of roughly 400 aMW.  STP follows a similar slope, though falls mostly short of the 10-Day.

Total ISO gas outages continue to accelerate after increasing another 700 MW day-on-day, and more than doubling since October 27th.  Despite retaining elevated outage levels, Hydro has returned close to 100 MW since the beginning of the month.  Wind also made a big move after seeing outages peak at 772 MW on Monday with all but 216 MW returning, 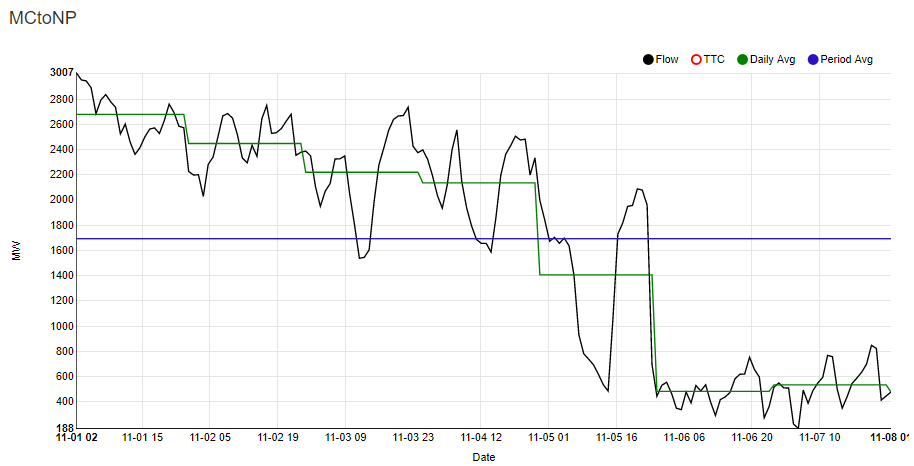 Flow into NP rose 50 MW day-on-day but essentially held its ground after seeing the bottom fall out over the weekend.  Average daily flow is down over 2,000 MW week-on-week, and nearly 1,200 MW below the weekly average. 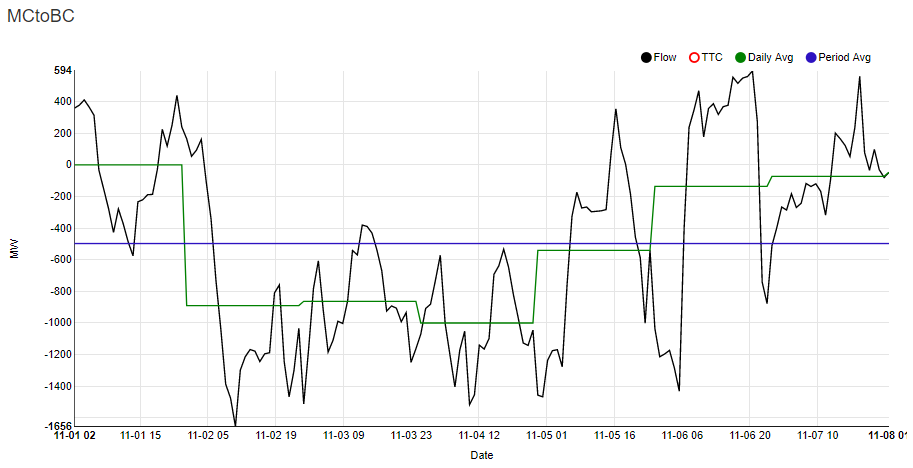 While flow south has slowed down, MC-BC is trending north, though still sit just below neutral in the daily average as yesterday finished at -73.  Yesterday’s hourly average peaked at 560 MW in the early evening hours, close to 30 MW less than the peak from Monday.