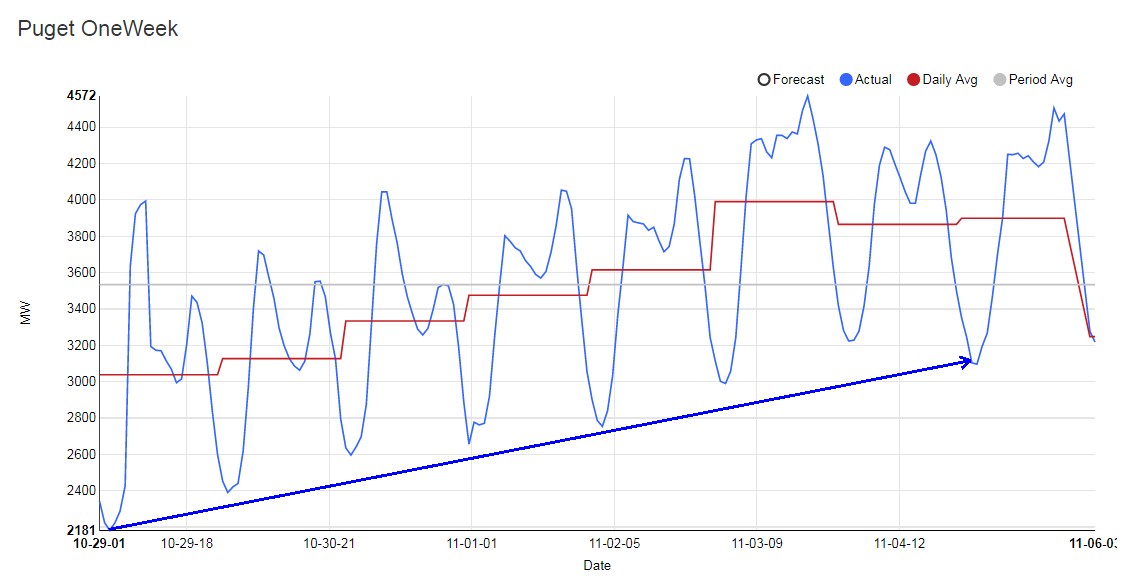 Check out that rally in the trough, even the peak, for that matter.  This overall tightening has collapsed the cash spreads to everything/everywhere:

The only one that didn’t tighten was the Socal Gas to PG&E Citygate; that basis spread is still premium to SCG. The ON|OFFs across the board have compressed, more off of falling loads in the south than any overall nighttime bullishness. The Northern heat rates are now higher than the south, all of which should provide interesting fodder in this morning’s APT post. 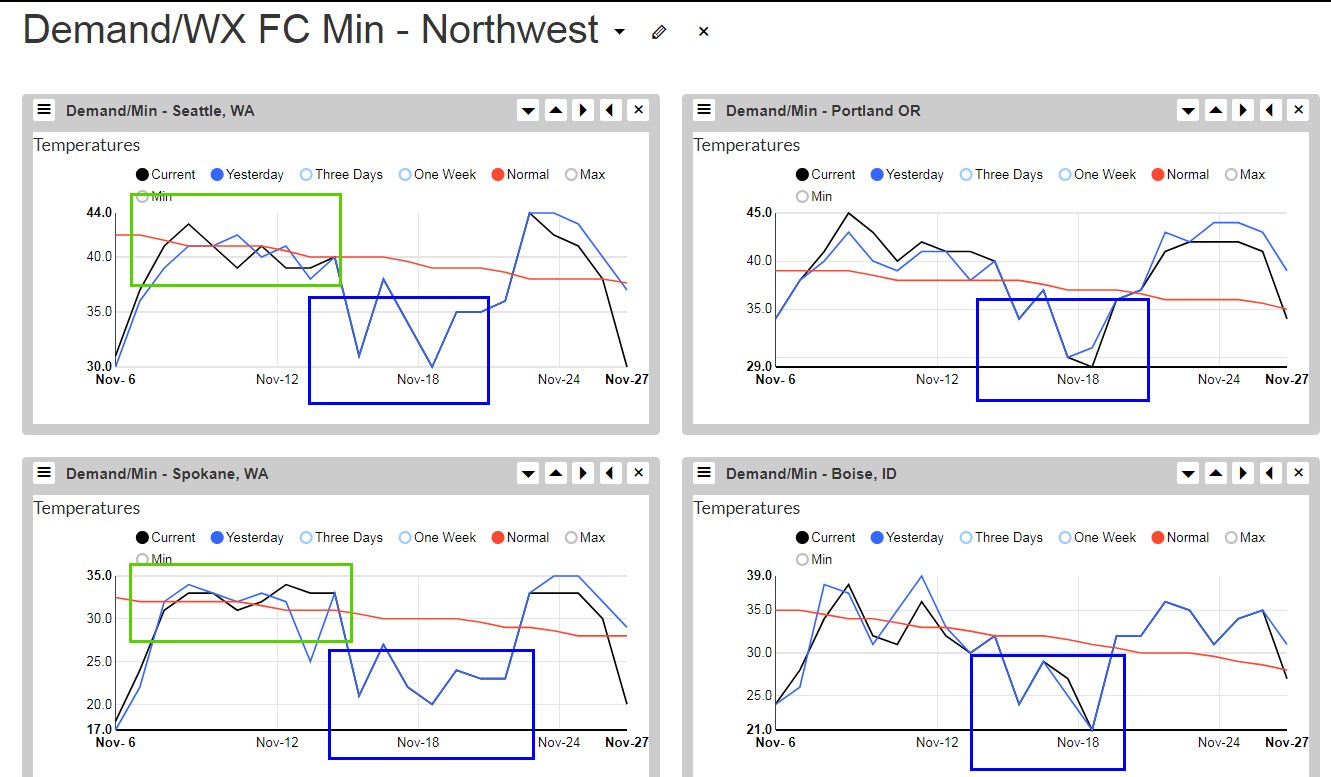 The Northwest outlook isn’t too rosy, at least for this week, as the region mean reverts to the … drumroll … mean. Beyond, however, is more intriguing as another mini-cold snap develops; this one isn’t but a day or two, it has the potential to last an entire week. 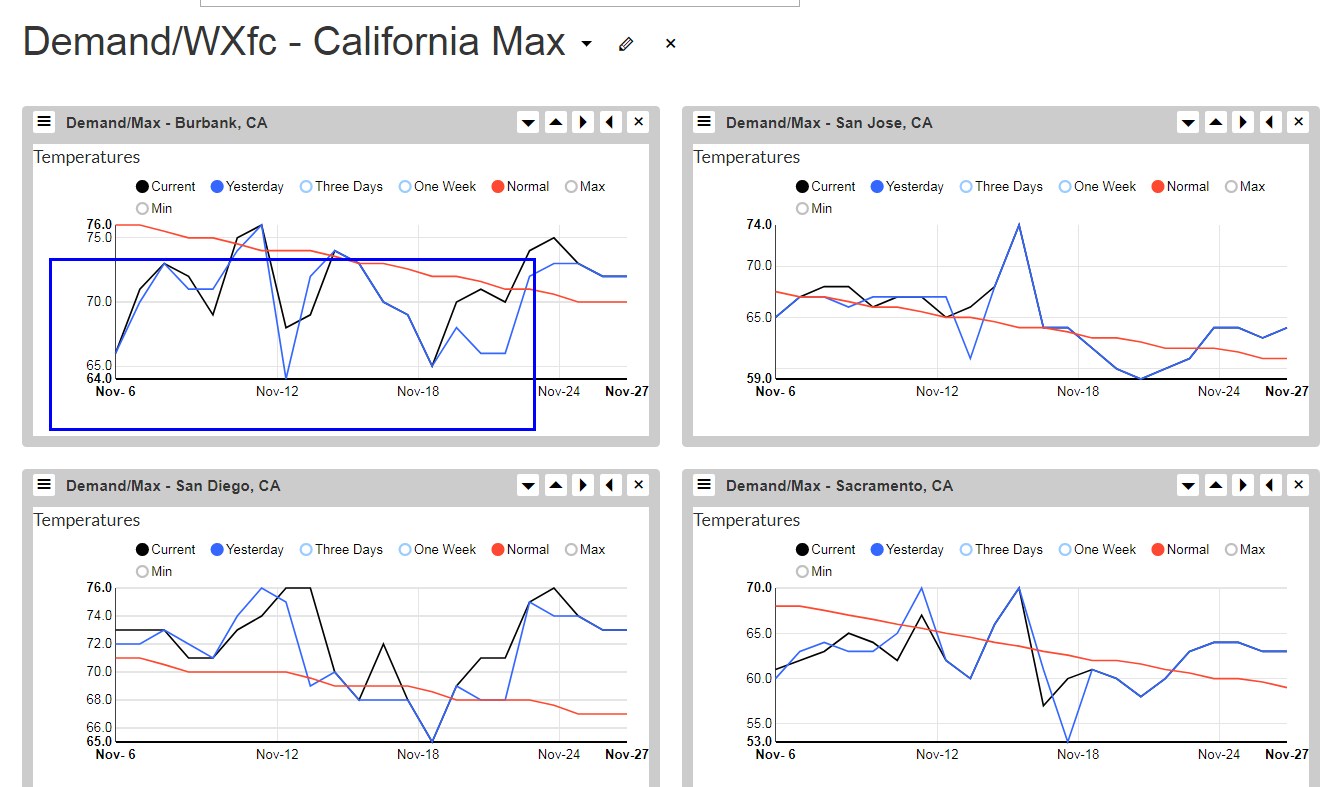 California has nothing, demand-wise, to render excitement; Burbank is projected to be slightly below average for now till summer; only San Diego shows warm anomalies. 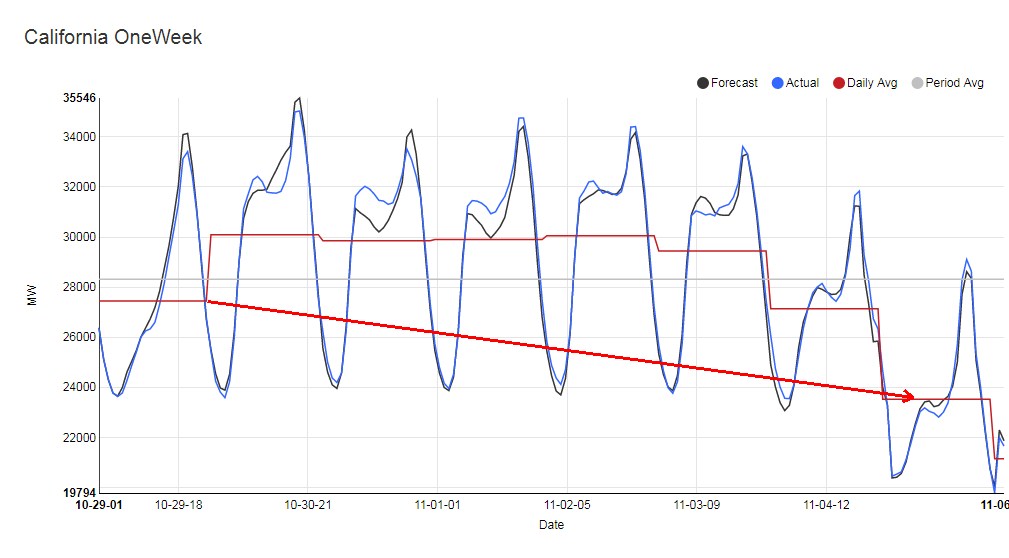 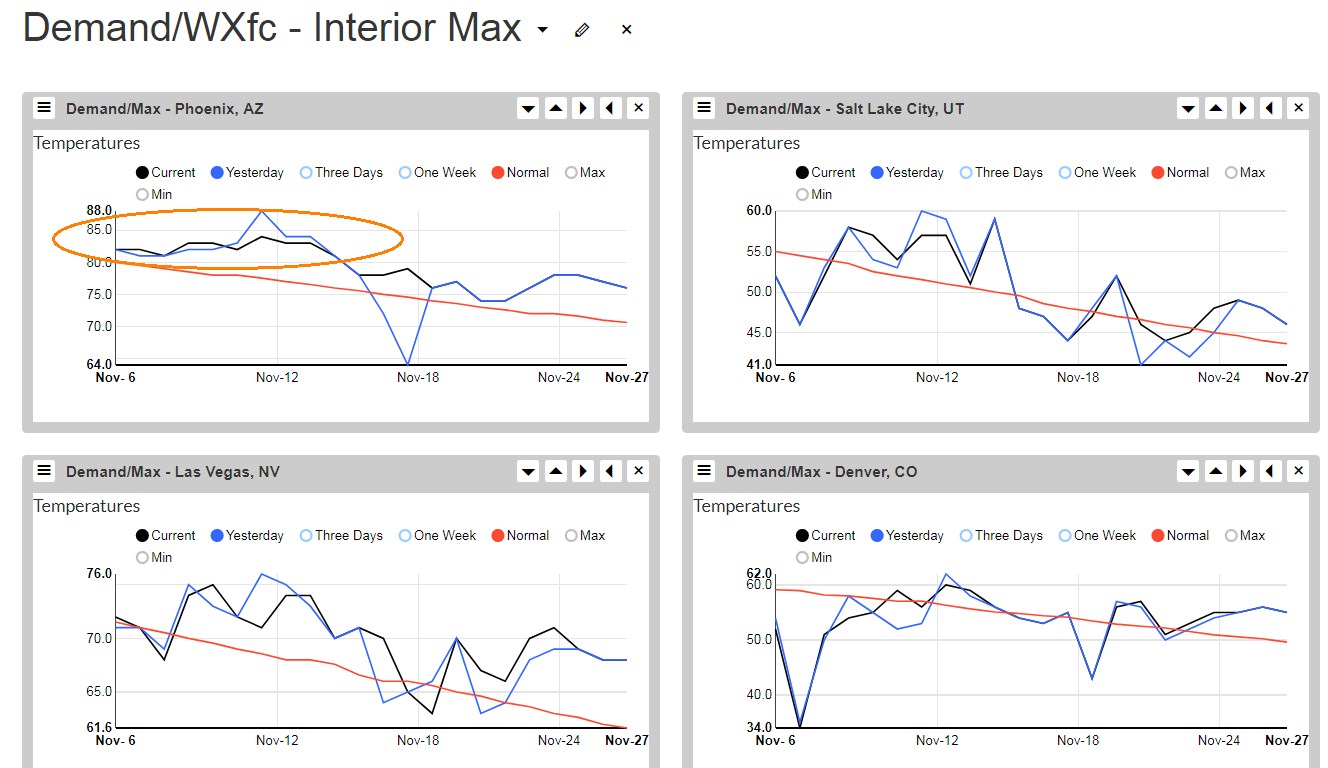 Phoenix remains above average, but with a downward sloping “normal” the Palo hub grows ever more bearish. Its neighbors grow more bullish off of increasing heating loads, but those will be just normal; there are no cold anomalies in today’s forecast. 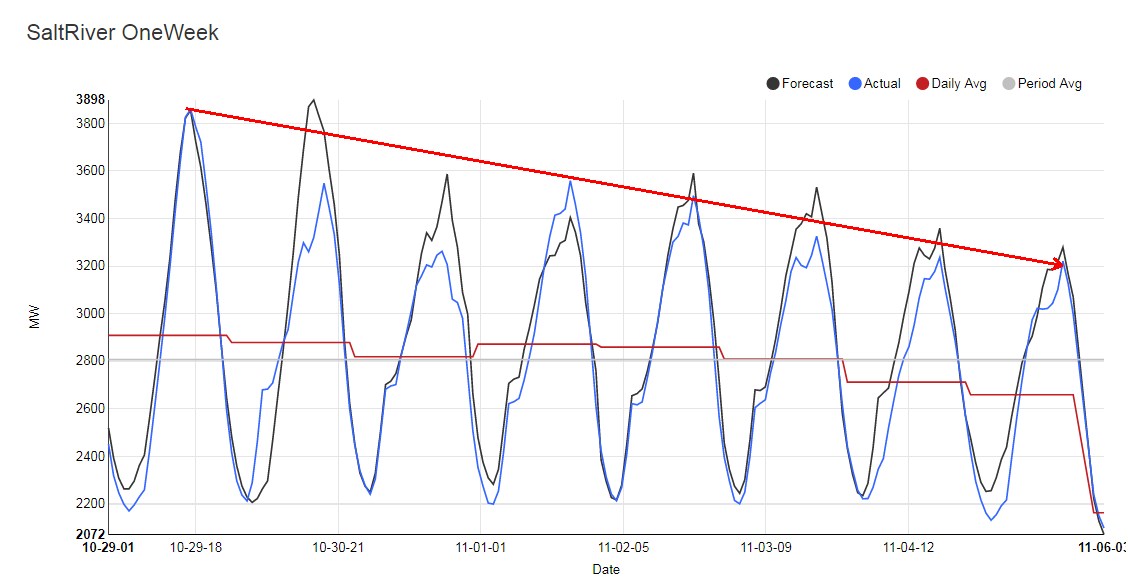 Salt River Project is a case in point, in reference to declining Palo loads. Not only is the ute seeing ever-decreasing loads, but they are also constantly over-forecasting. 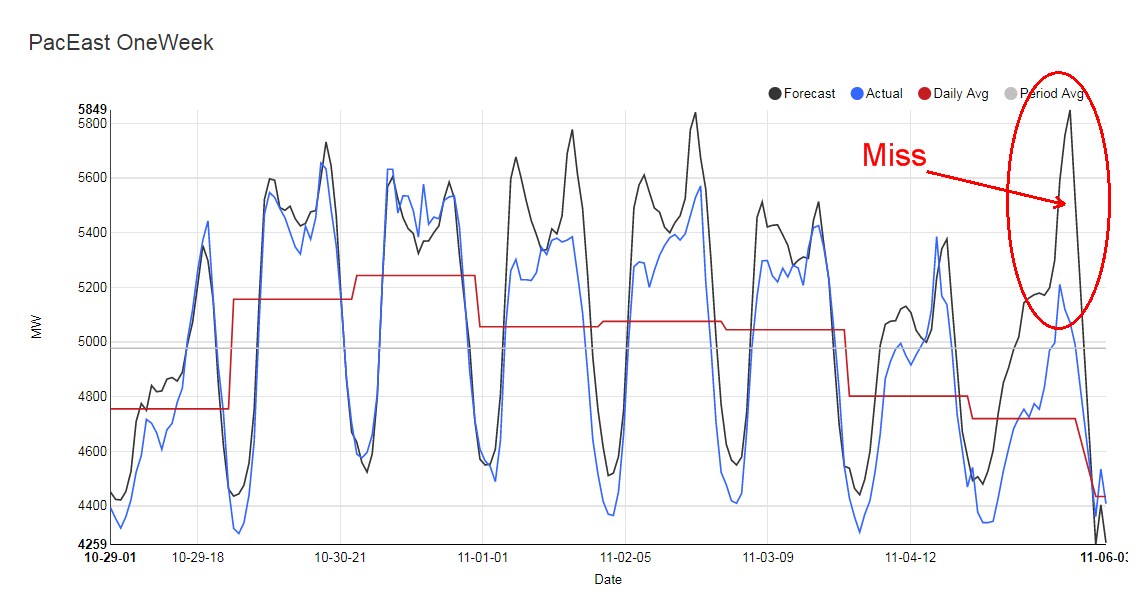 PacEast thought they might have a big day yesterday. Instead they had a big flop with a 15% miss in Sunday’s load forecast – were they long yesterday in the HA markets?

The northwest was cold, Seattle saw low 30s for minimums; Spokane was even colder. California was ambient-air neutral. 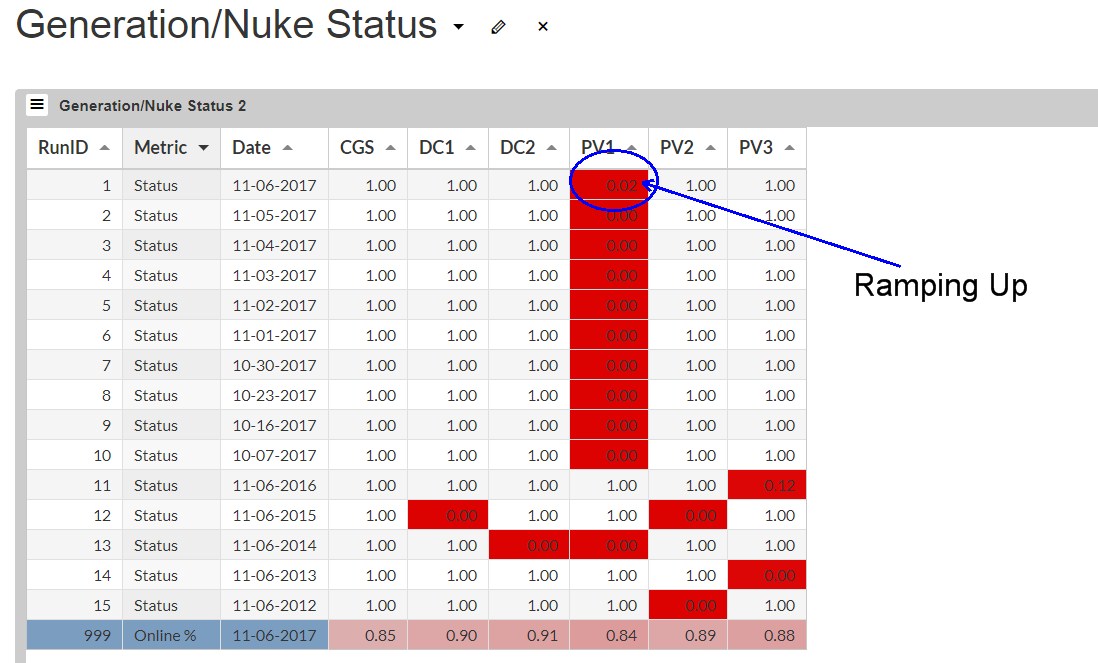 The most significant news on the generation front is the return of the Palo nuke; it is now at 2% and should be online by Wednesday, adding fuel to the bearish fire in that hub. 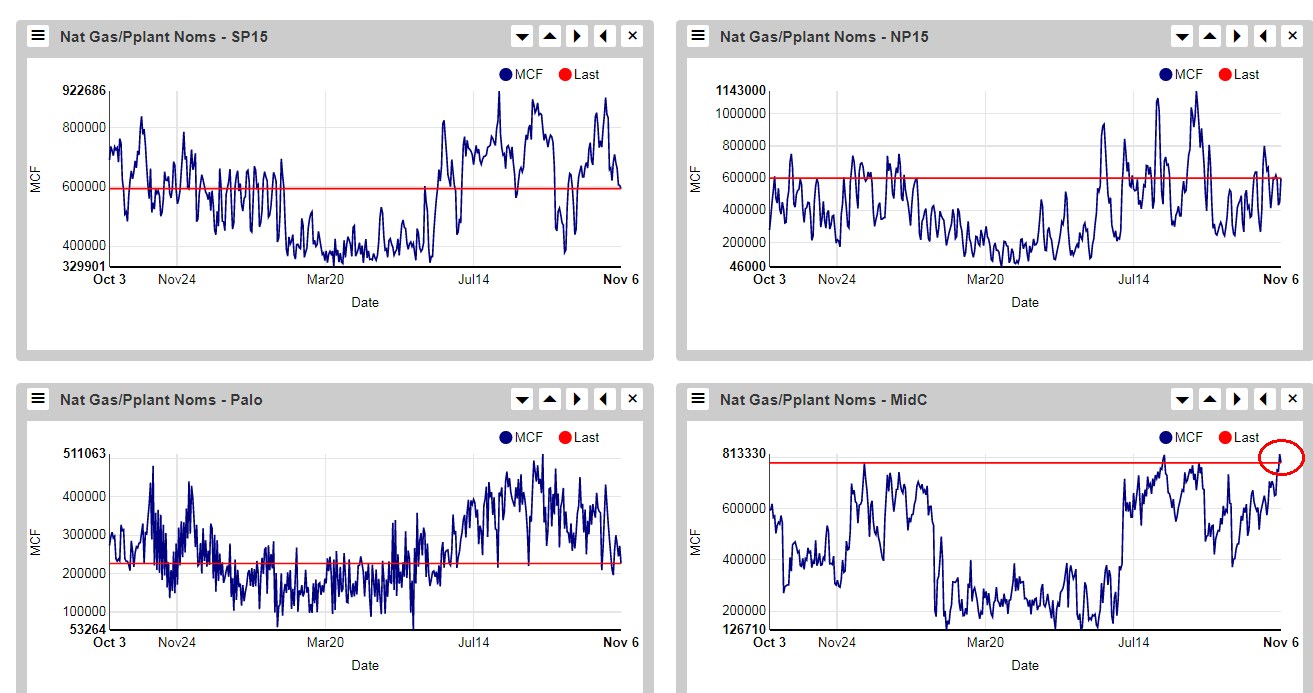 Check out those Northwest gas noms and keep in mind the DC is down. Imagine the hub with the line back — add 3000 MW of peak Net Demand. The only places that new supply can come from are Hydro, cuts in exports, or BC Hydro. The DC is confirmed back on the 19th:

BC is already selling close to the maximum which leaves hydro. At least loads soften this week but, just about the day the line returns. it grows cold again.  Hhhhmmmmmm. 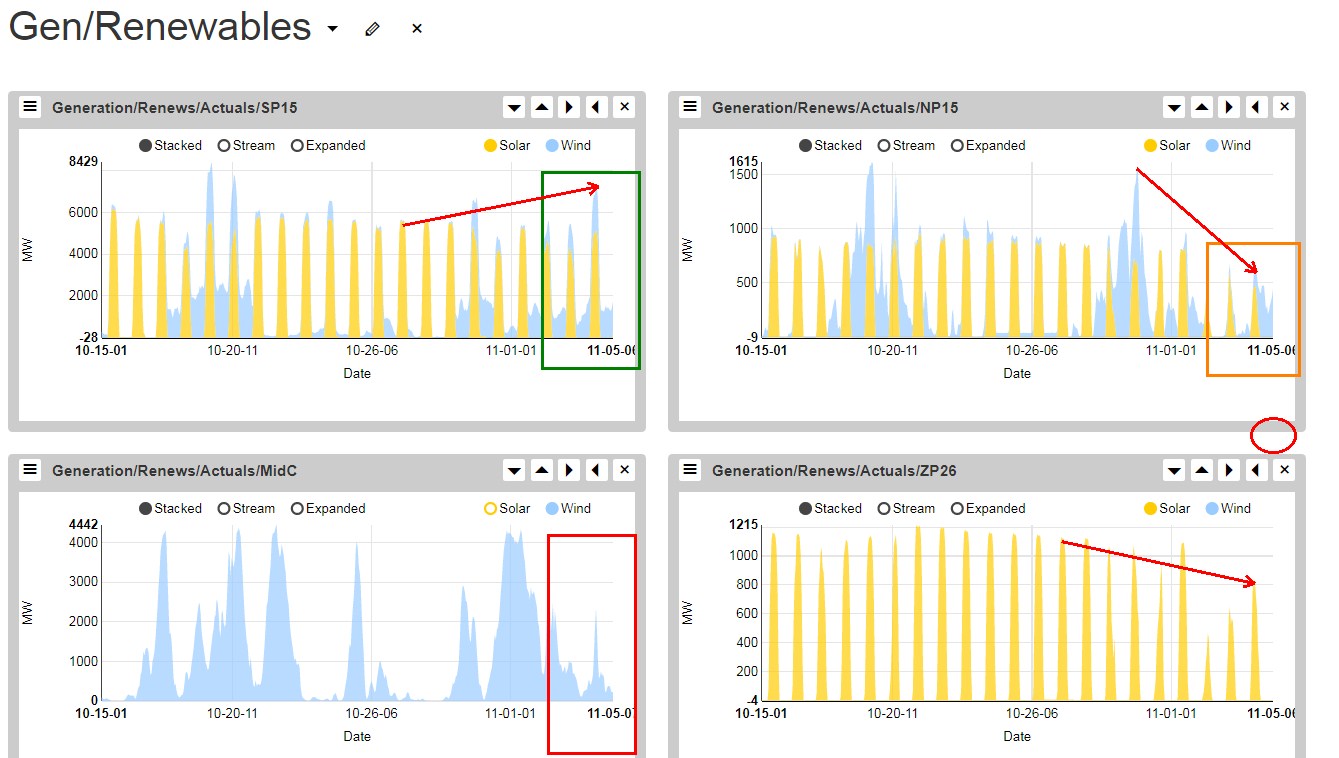 The weekend renewables were interesting. Look at the solar cuts in ZP, about half of the previous week. There was no wind at the Mid-C, but it blew hard in Socal and not so hard in Nocal. 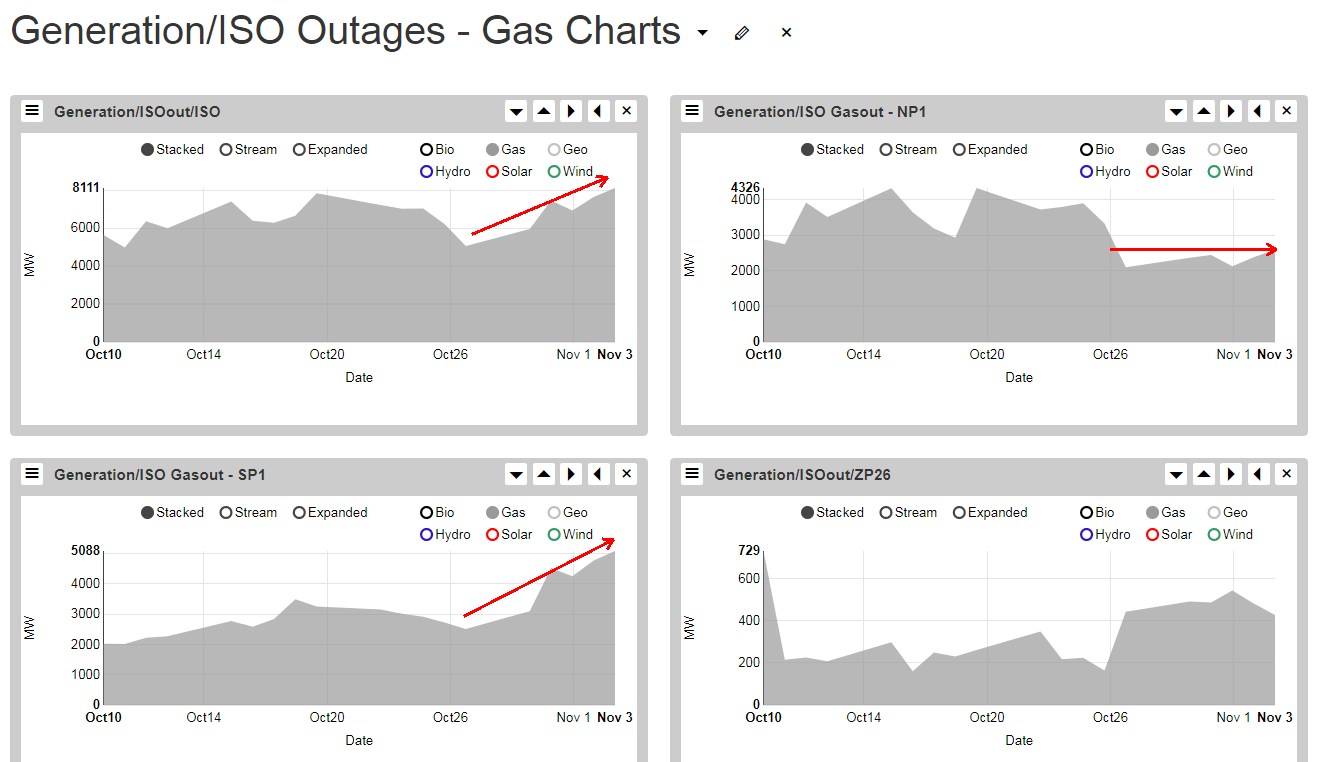 ISO gas outages have rallied hard over the last week but mostly in SP15; NP is about flat. 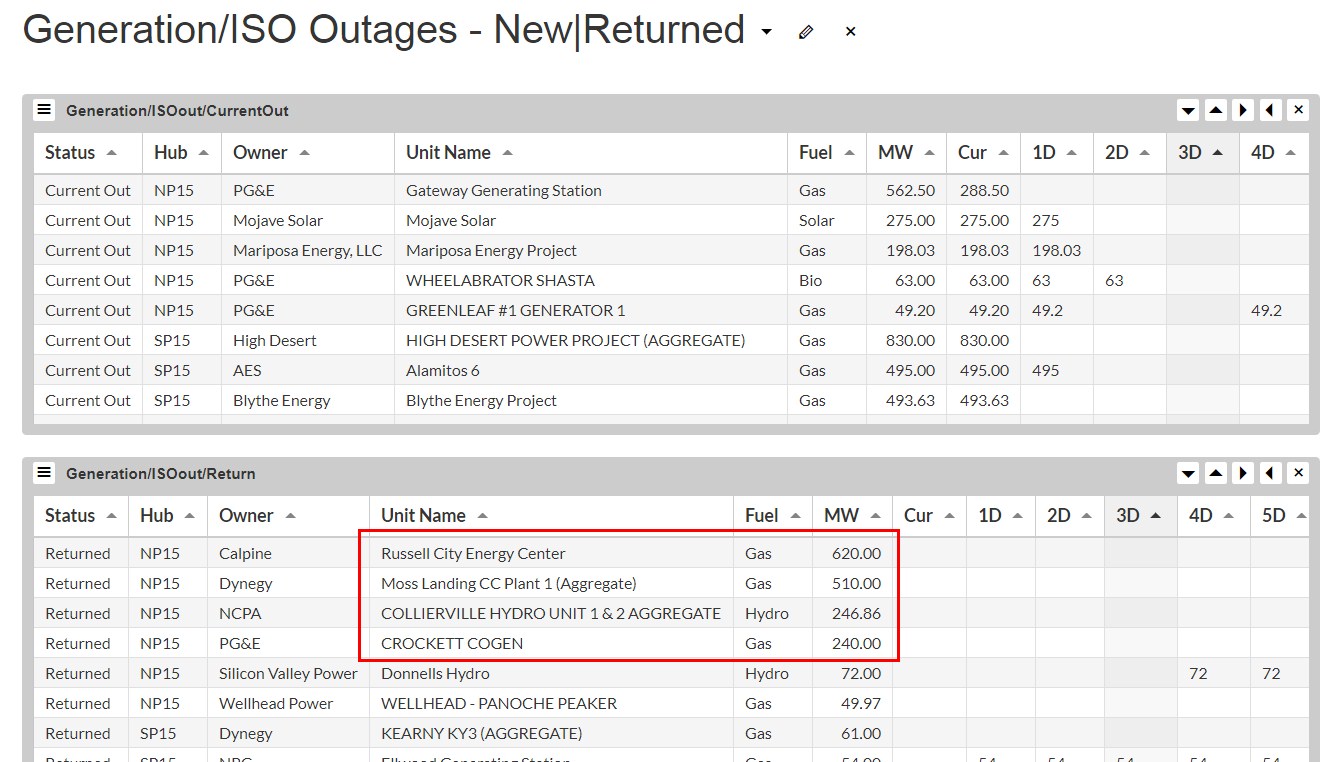 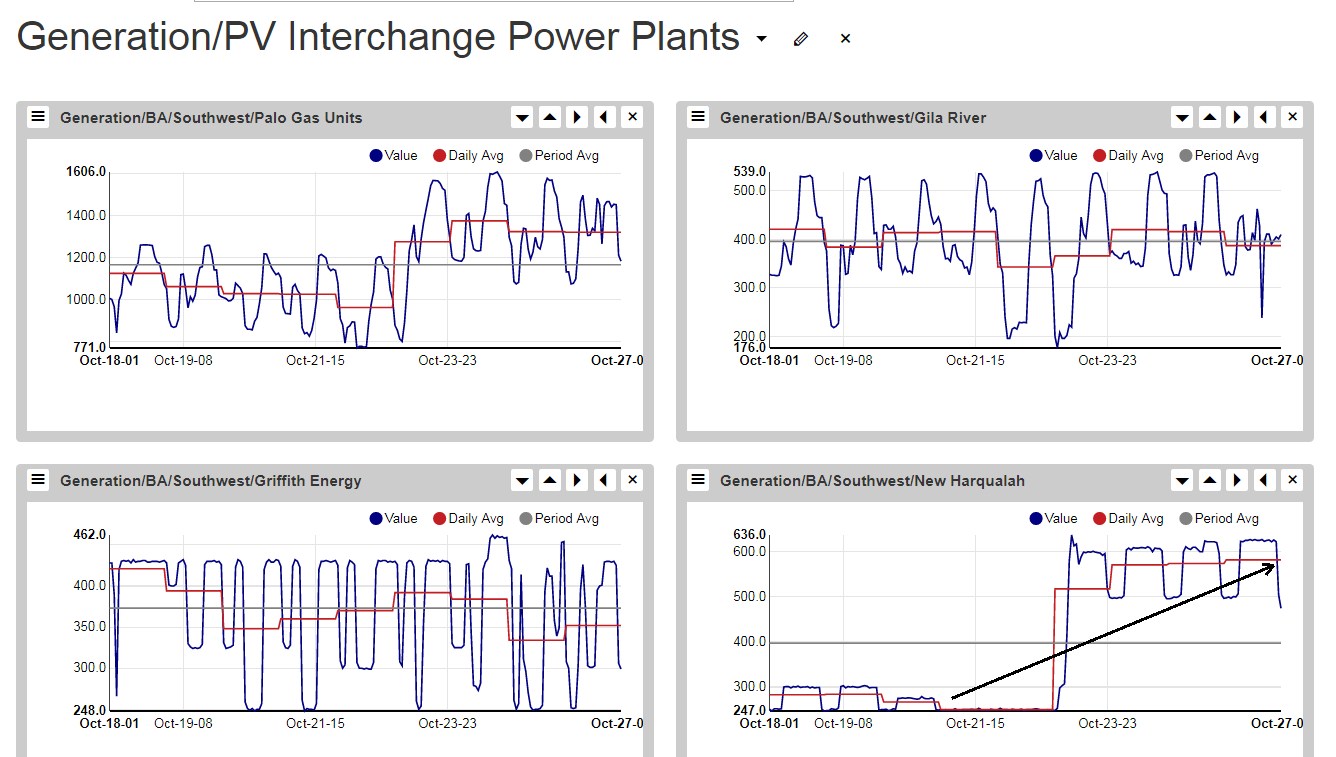 Palo also saw New Harqualah return a unit which may be suggesting that more will be coming out of planned outages, all taking place while the nuke ramps up. Hard to find anything to like about Palo.

California will get a smattering of rain over the next couple of days, then will go dry. Perhaps the dearth off wet explains the recent cuts out of Shasta discharge:

That drop yesterday is 100% regulated; CDWR recognizes that WY18 is starting out dry and the trend is not the agency’s friend. Meanwhile, the ISO’s total production continues to freefall: 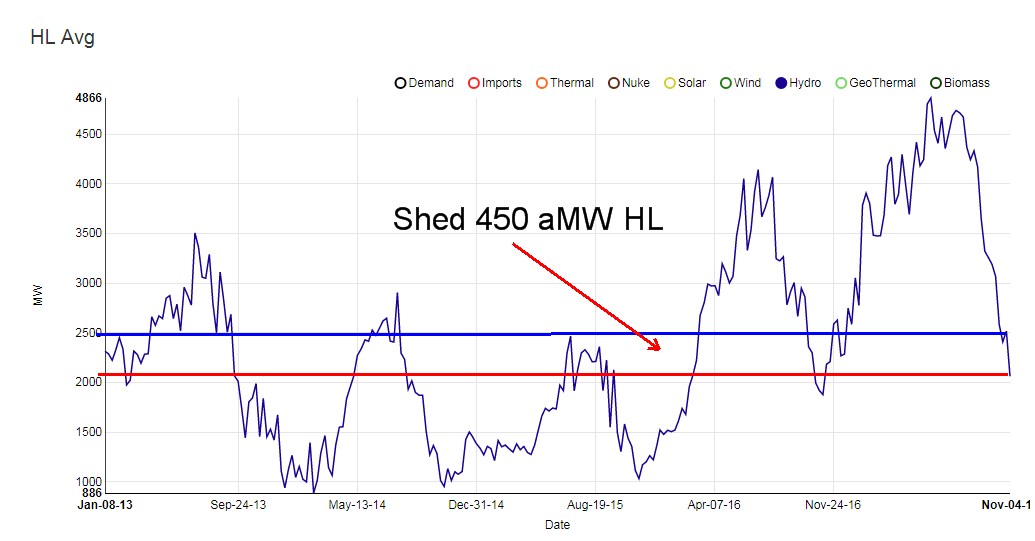 The Northwest feels wet, but it is still below average, by almost 33%, over the next ten days. Beyond, there is another storm building and that next one may be more significant than this week. Worth watching.

Total energy out of the reported projects on the COE site is way down.  Strange that outages are also off, almost a 1000 MW lower today than last week.

The major Northwest storage projects all drafted over the last week. Makes sense, natural river flows are tight, and loads rallied. With the return of the DC, even more pressure will be placed upon these ponds as they are the only source of new supply to meet a rallying MidC Net Demand.

And it wasn’t just the USA projects that drafted; look at the Arrow rally. That Treaty water was needed by BPA to meet its load obligations and only means fewer bullets for sometime later in the winter. 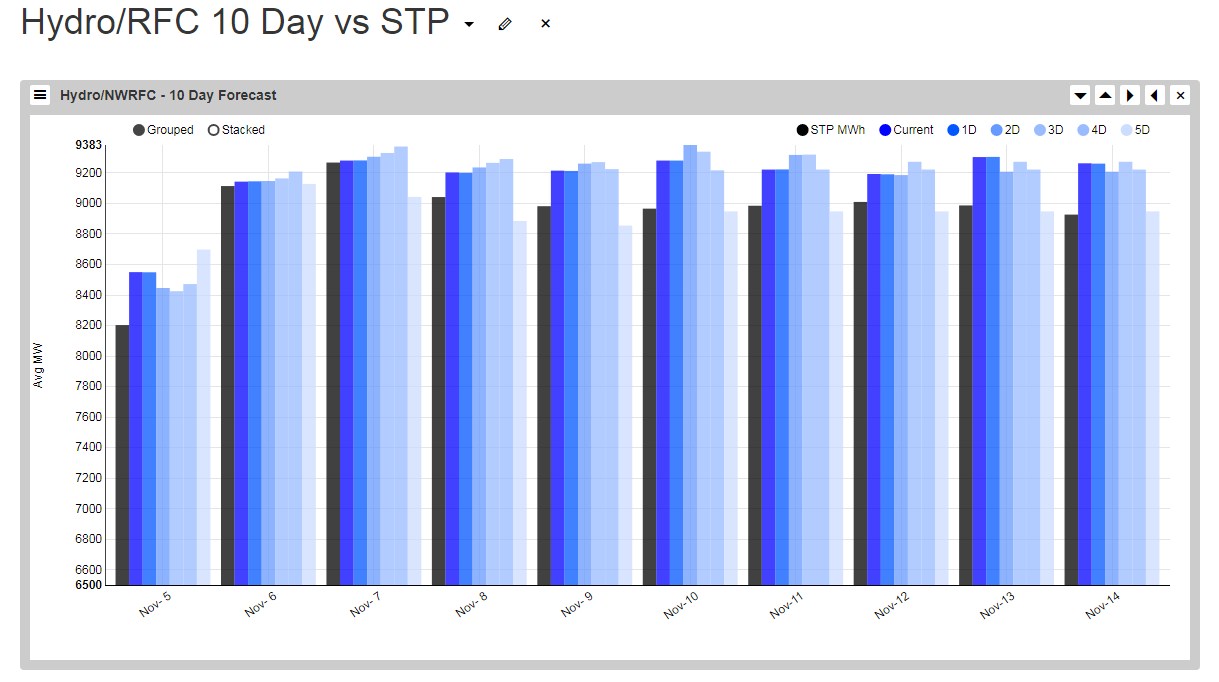 The comparison of the RFC’s ten day to the 120 is remarkably unremarkable. For once, it seems, their 120 day (STP) nailed the subsequent 10-day forecasts. This bodes for potentially a blase STP, but before making that call, let’s review last week’s forecast:

We posted this chart last week, but it is worthy of a revisit today. Note the tale of two anomalies: very tight in the front, the lowest total energy while the back is awash in water. Huh? It isn’t, but the RFC is posting Jan-Feb #s like we all know there will be biblical floods. I don’t see that, do you? We think those back-end numbers get walked down over the coming weeks, maybe starting today. The front we feel is a reliable forecast, perhaps a touch light.

Coulee drafted into the weekend cold weather and probably will refill some this week in anticipation of that cold weather lingering in the 11-20 day forecast.

These tables compare Snow Water Equivalent (SWE) anomalies across time. The Northwest has prominent anomalies, but the water year is young, and they don’t matter a lot, though with each passing day their relevancy increases.

Check out BC’s exports; those opportunistic sellers liked the price and took that energy they bought last week and gave it back to BPA. That is expected, but note the strangeness on the COI. First, a massive derate, but even more compelling is the lack of exports to California. The price just wasn’t high enough to warrant tightening up the Northwest an, so nothing flowed.

Final point, California’s DA prices were so weak even Palo snubbed the state.

In years past, the DC return had been pushed back but not this year. The line is scheduled to be energized on the 19th which will happen to be a cold day.

The Northwest grows more bullish while the ISO, at least the southern portion, doesn’t. Palo is taking a bear turn with the double whammy of returning generating capacity and declining loads. Go North, young man, there’s gold in them thar hills.