Mid-C’s cold snap got even colder in the latest update, especially in Montana as Kalispell and Billings show up with more than 10 degrees below normal based on average daily temps.  NP-15 lost a couple degrees as an aggregate as well as all stations report below-normal temps. 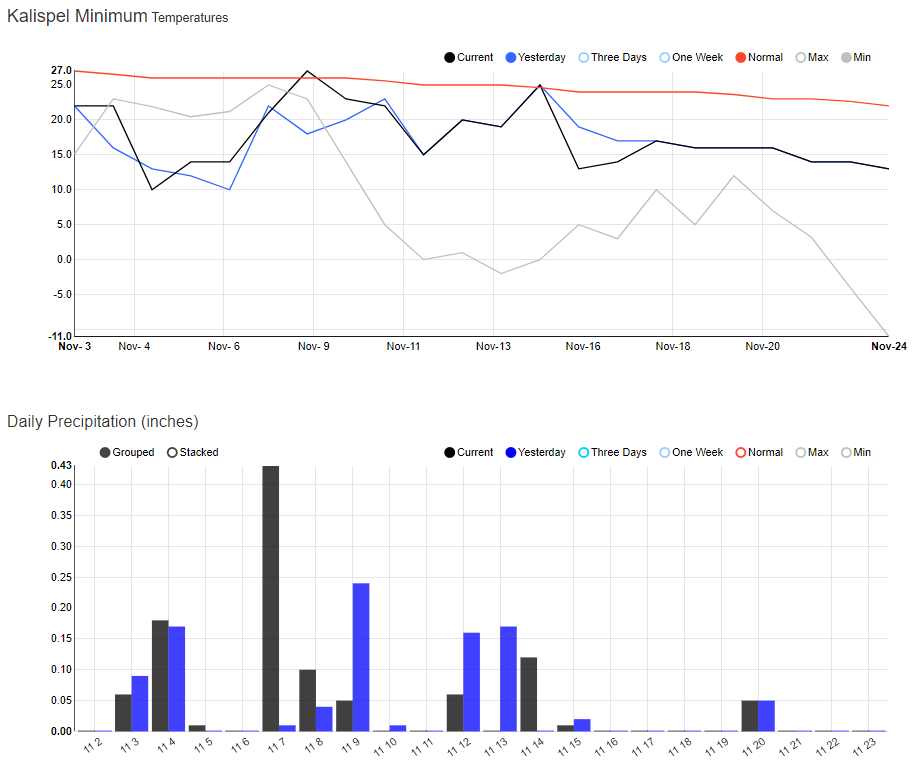 Western Montana is getting set mix a decent about of precipitation and very cool temps over the weekend, enough to start building the snow pack in earnest.  Kalispell shows nearly a half inch of precip for the 7th with a low of 15 degrees.

Seattle’s jaunt below normal is holding steady and will drop as low as 33 on Sunday, nine degrees below normal.  Lows will eventually reach above normal by the end of next week, but the extended forecast suggests another significant drop, this time dipping below freezing.

Portland will eventually dip to 33 as well, but starts off the weekend with a low temp that sits eight degrees above normal.  In another change from Seattle’s forecast, next week should be considerably warmer with lows in the mid-40s.

Spokane is a different beast altogether where lows are set to plummet by Sunday, dropping 13 degrees below normal before settling at just 19 degrees.  The majority of nights in the next 21 days will find themselves well below freezing.  Looks like winter has come early to the Inland Northwest.

Next Monday is trending slightly cooler for San Jose as minimum temps were adjusted two degrees lower at 43 degrees, five below normal.  This cooling period will be short lived however, as minimum temps climb back above normal by Wednesday and should mostly stay there through the end of the forecast.

Move inland a bit and you could see lows fall into the 30’s as Sacramento’s forecast suggest for the 6th at 38 degrees, seven degrees below normal.  That too will be short lived as minimum temps stay mostly above normal thereafter.

Sacramento’s max daily temps are a different beast.  Daily highs will stay mostly below normal over the next three weeks, especially on the front end as temps fall into the 50’s.  The 5th is expected to top out at 59 degrees, 10 below normal.

Burbank max temps will fall into the 60’s over the weekend and stay below normal through at least the 10th.  Despite the cool forecast, today’s projections show up several degrees warmer than what was shown yesterday, including a five-degree bump for the 8th.

Phoenix should stay north of 80 degrees for the foreseeable future, even jumping into the high 80’s potentially by the 12th.  In a change from yesterday’s forecast, the 7th and 8th saw an additional three degrees added to the forecast. 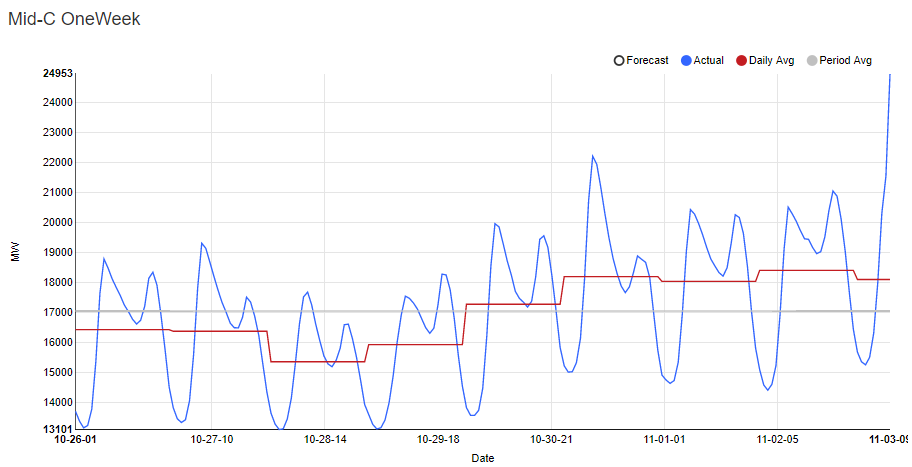 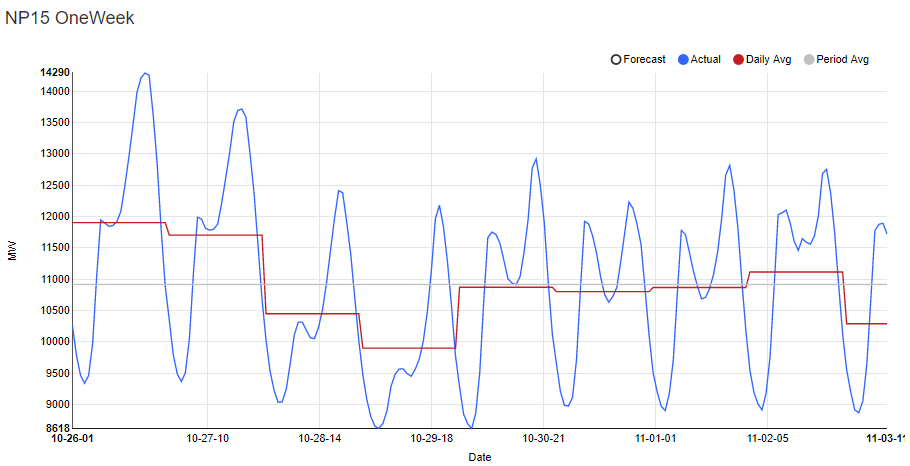 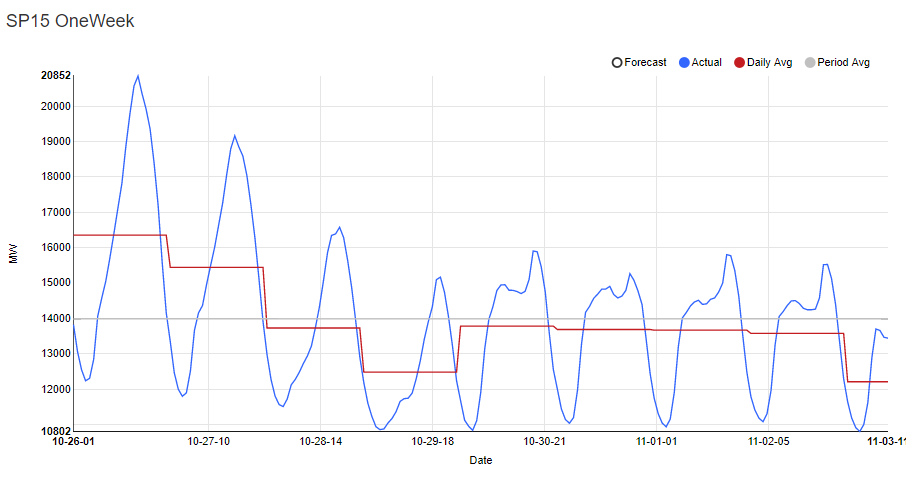 Very small day-on-day changes to the 10-day forecast showing up over the coming weekend, the largest of which is just 11 aMW.  Both the 10-Day and the STP ramp up the forecast beginning on the 4th day, eventually reaching a plateau north of 9,000 aMW.

Yesterday brought on another 700 MW of gas outages while hydro saw roughly 50 MW return.  Solar outages have nearly doubled in the same span of time, reaching 427 MW as of yesterday. 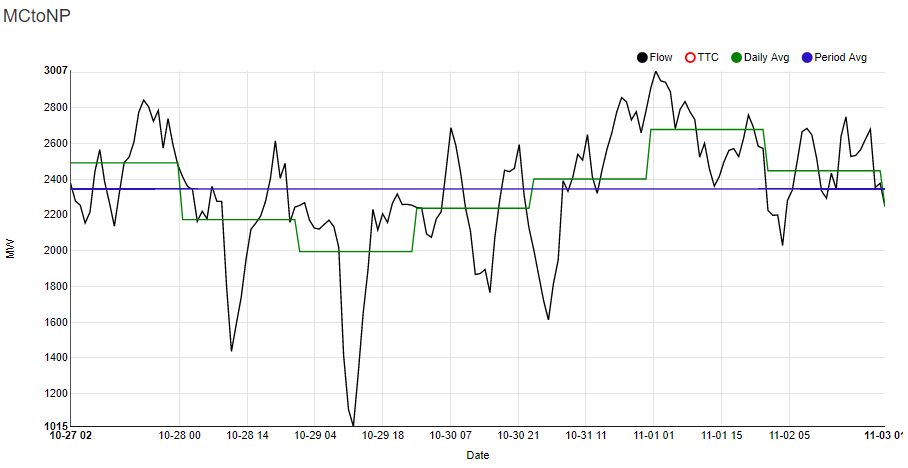 The daily average flow from yesterday dropped 250 MW, finishing at 2,448 MW, still above the weekly average.  Flows dropped to 2,029 MW in the early morning hours, the lowest hourly average since the 30th. 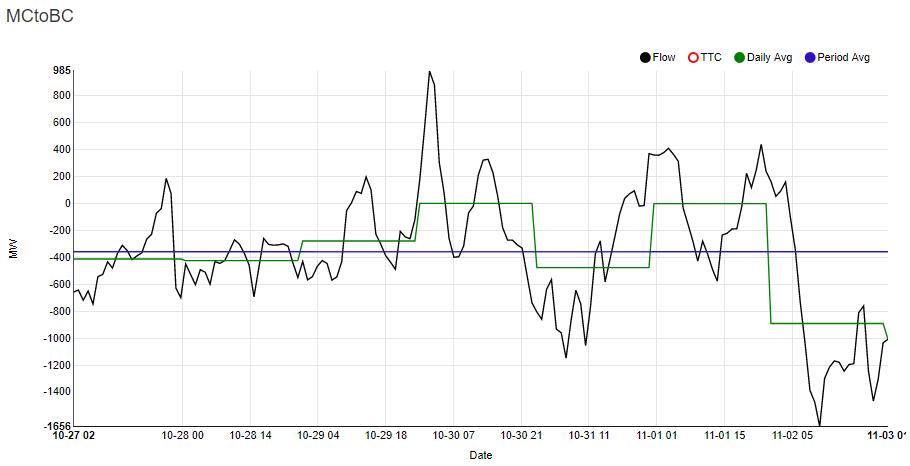 MC took heavy imports out of BC yesterday as the daily average finished with its lowest marks in well over a week at -891 MW.  Hourly flows dropped from 161 MW at 4 AM to -1,656 MW by 11 AM.  The day-on-day difference in daily average flow amounted to 891 MW (moving from an average of 0 the day before).