Someone asked why I write about current market conditions on an APT post. Good question, the answer is nothing impacts the term market more than the cash market. Maybe 95% of any one day’s volatility can be explained away by the change in the cash markets. Is that fundamentally correct? Absolutely not. Is that mathematically true? Absolutely; run your own correlation analysis on term moves vs. cash moves – positive R values, very high R values. Call it one of the vagaries of power markets; maybe there are too many ex-storage commodity traders that have been downgraded to power traders. They can’t grasp the notion that there is no storage in power (forget the fuels, we’re talking about the commodity). That is why we write about current market conditions before we look at term market opportunities.

Not that there aren’t significant fundamental moves afoot that also impact the term markets; there are many, but they move at the speed of a glacier. All of us are blessed to be working in WECC because it is the one power grid in the world that has a real, and forecastable, fundamental which drives term markets – Hydro. Snow today is  runoff in June; no snow today is BPA scrambling in June. There are a few other discreet events which show up, now and then, like capacity additions. This information is mostly proprietary, though the EIA does release a monthly capacity update in its 860M report. Another non-discreet term driver is load growth, and we are going to roll out our version of this, which will be updated daily. Like cumulative snow, load growth can creep up on you and all of a sudden its material, its real, and it will already be in the market price. Better to monitor it every so often than getting caught with your pants down around your ankles.

There, that is said, now on today’s fundies which will whipsaw Q3 2078, no doubt.

A lot of people were talking about the Bal Week SP rally on Monday; we looked for a reason, and the only thing we came up with was the plethora of units that came off Sunday and Monday: 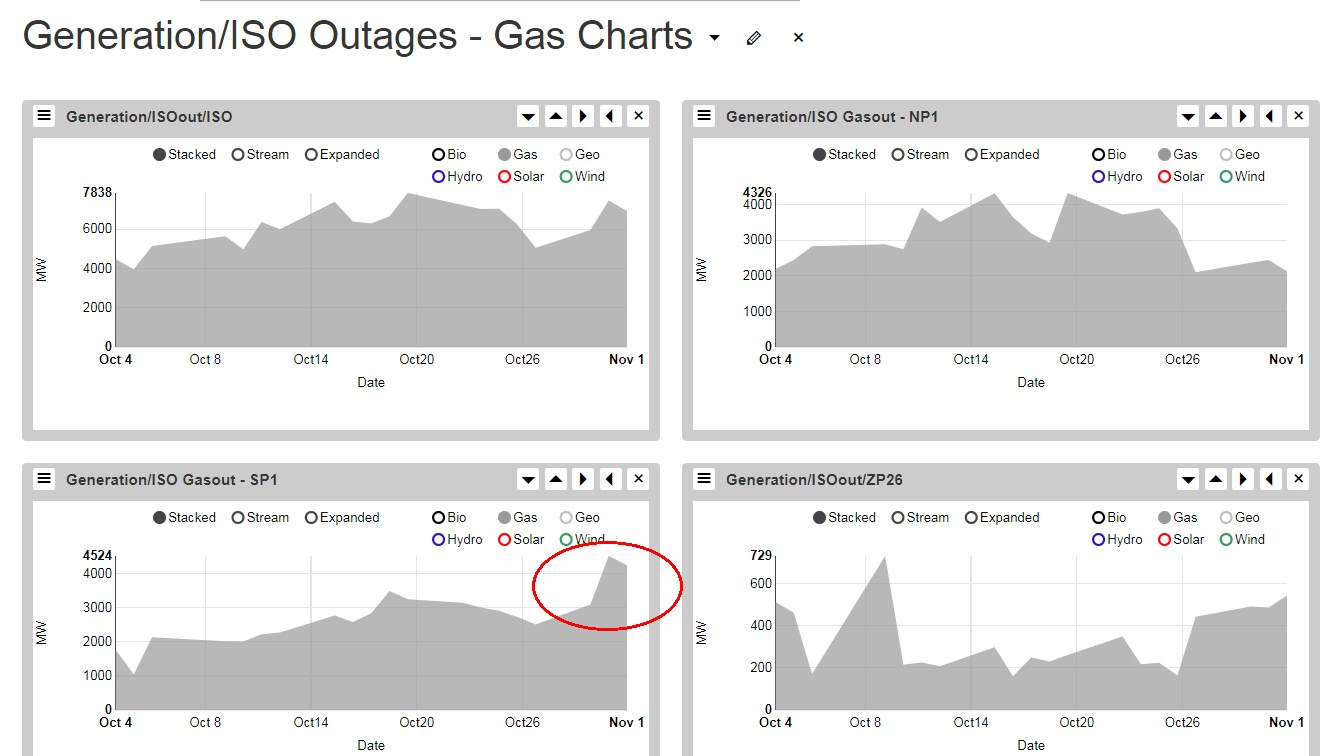 Perhaps a few utes, maybe even the gencos, covered the lost gen? There doesn’t seem to be any other explanation, that we could find.

Back to that ISO DA plot; as the fundamentals soften inside the ISO (net demand falls) we see the first hints of a new reality – Solar Hour Congestion. And the Southwest seems to bear the brunt of that, though we find it strange that SP clears over NP despite being the home to most of that solar.

The MidC’s on/off is tight, and we’d expect those term spreads to feel pressure. The SP heat rate, on a chilly day, is off the charts crazy, maybe driven by those outages but more likely a lingering hangover from last week’s heatwave and we’d expect continued downward pressure there. Another surprise, the Socal Citygate clears over PG&E’s citygate. The latter falls, day on day, while the former posts a modest rally. 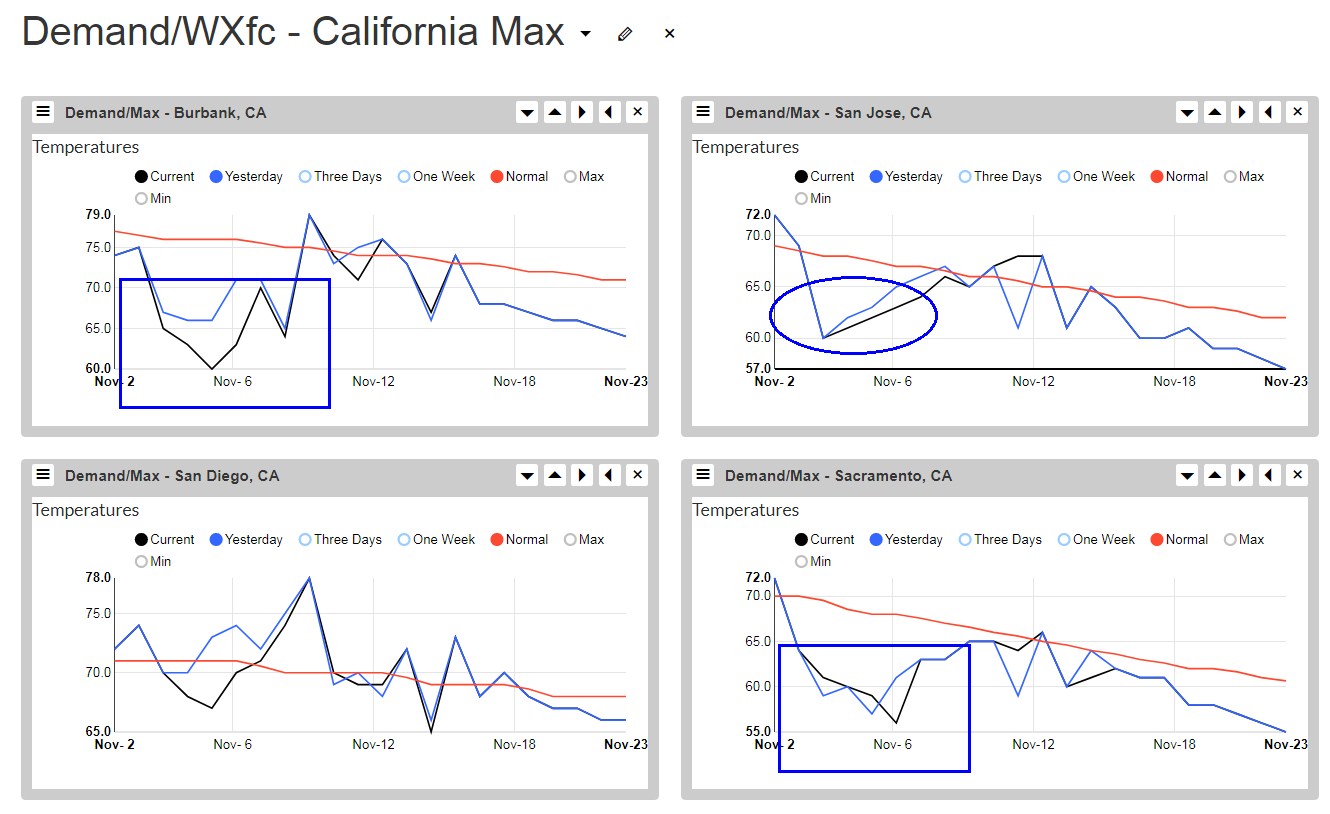 Lots of blue markups because this is a chilly, and bearish, 15-day forecast. Burbank flirts with the 50s for a high — all of next week will be chilly. Not only will the Angelenos feel the chillish shame of losing the World Series, but they’ll also suffer the wrath of Mother Nature as she blankets the city in cold. Silver Liners will point out that NP’s heating loads will rally, especially at night, and they’d be right. 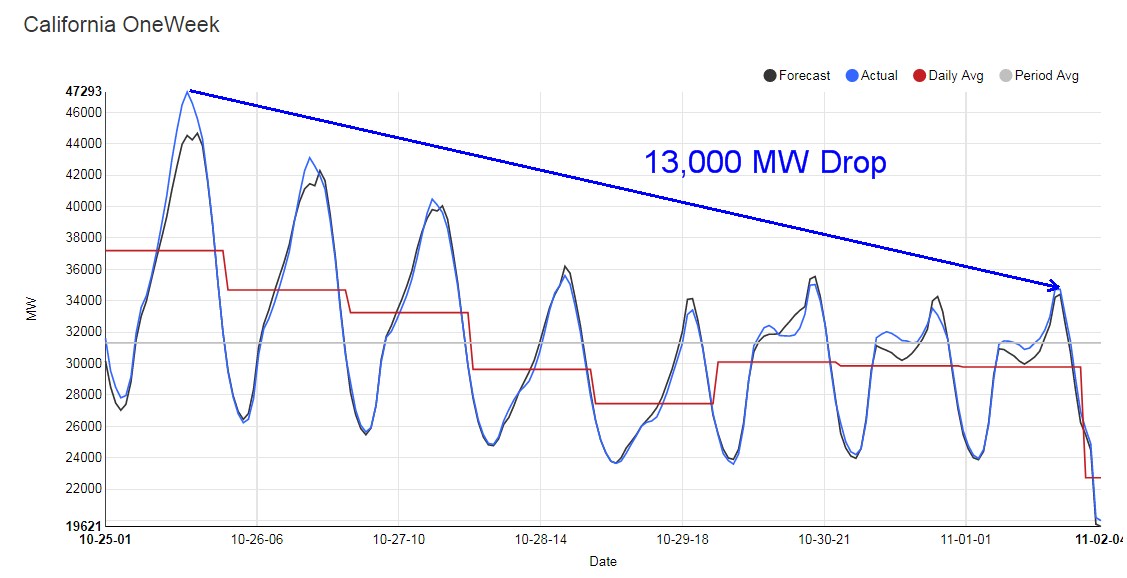 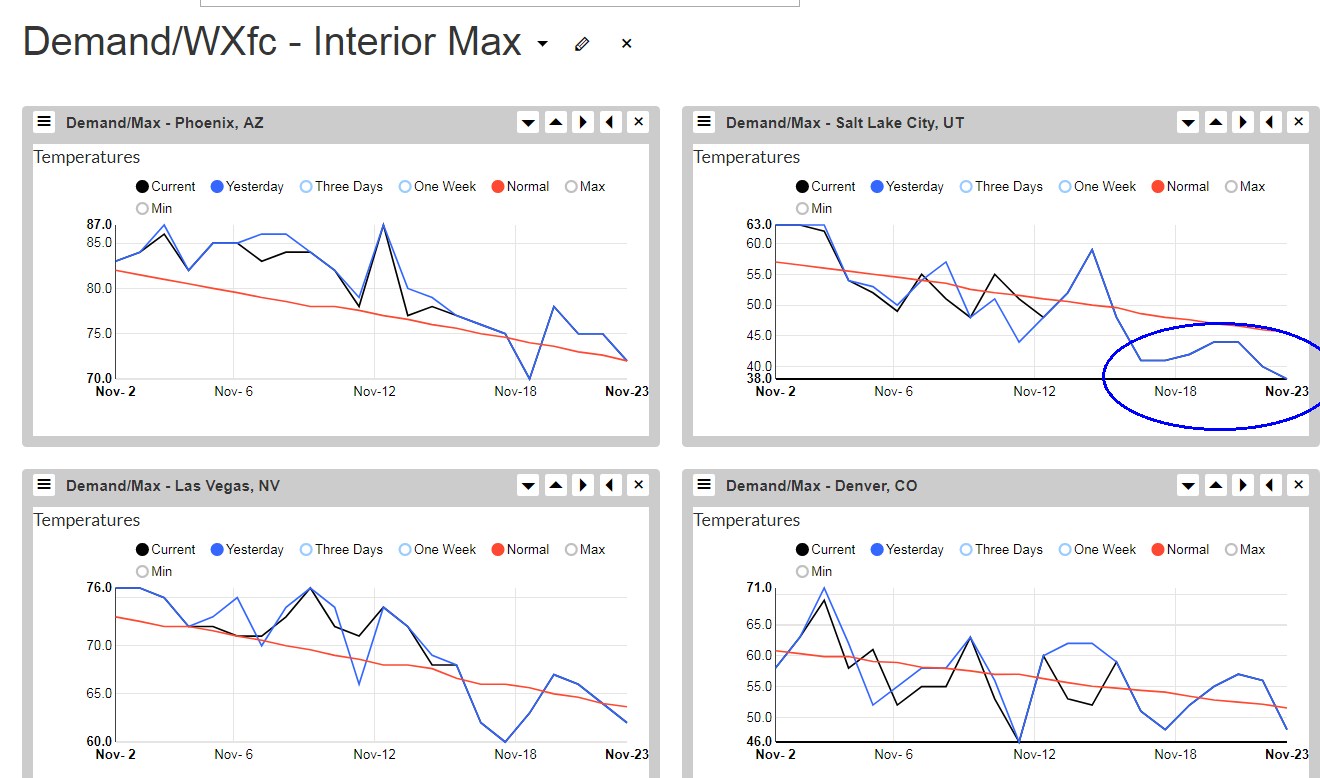 Phoenix continues to ignore the ten-year average and remain above-said line; the city has done that since May. PacEast is looking at some healthy heating loads in the 8-15 day horizon; Palo is just looking at ever-decaying loads. On top of that, that nuke is coming back about when the hub hits the mid-70s and has zero load. 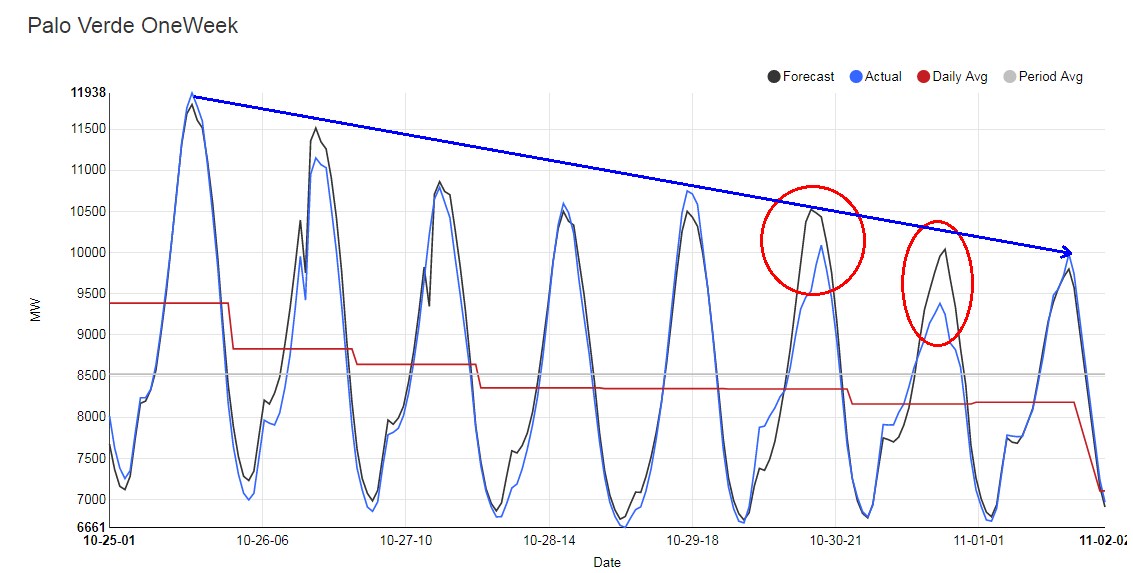 Palo loads also cratered and will continue the slide south for another couple of weeks. Also noted the big misses in the utility’s demand forecasts over the last couple of days. 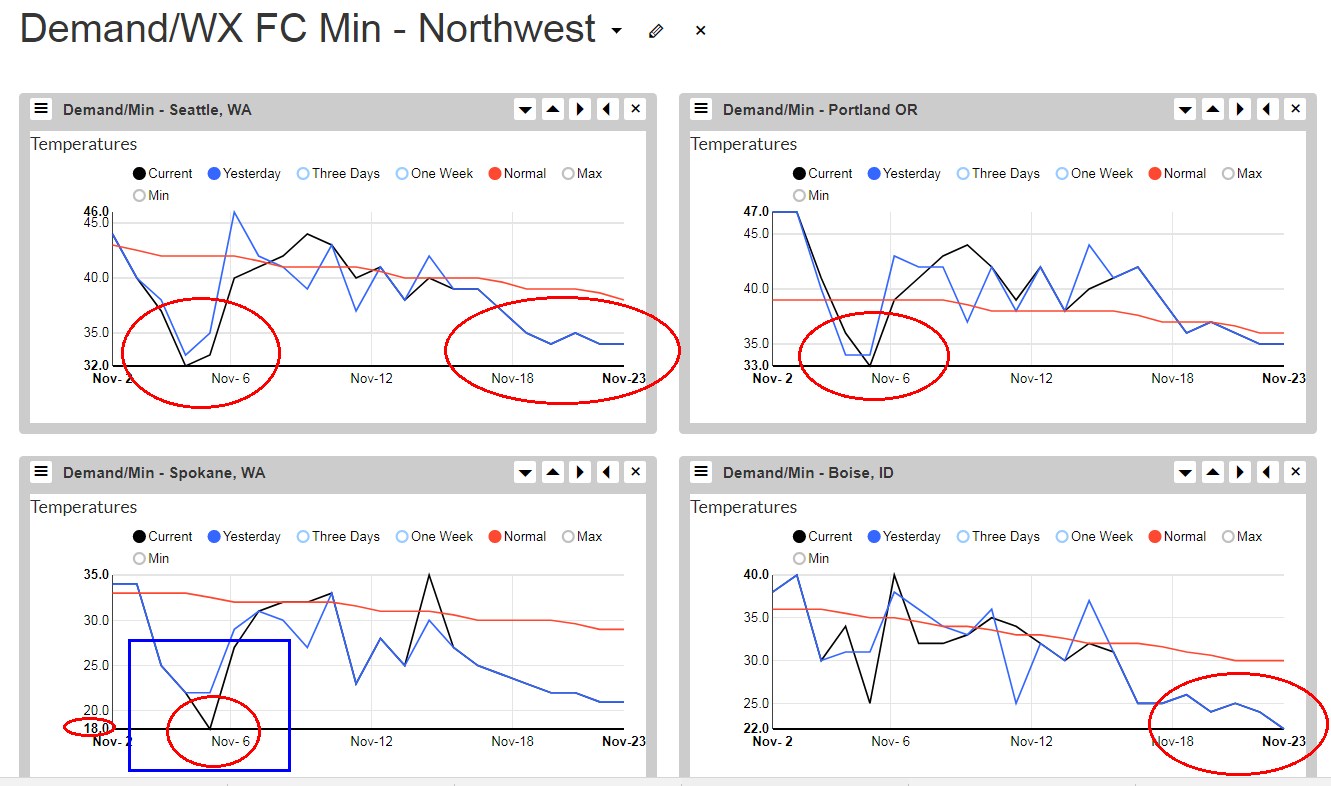 The BIG story is the cold in the Northwest, and this is downright chilly for mid-Fall. That fair city called Spokane sees morning lows of 18 degrees next Monday. Also, note the string of days below average in the back-end of this forecast. Not that we place a lot of confidence in a weather forecast out that far, we also take note the anomaly is cold, not warm and every day is cold. This has the potential to be a MAJOR event, and we’ll be watching over the weekend to see if it holds, or better, builds. 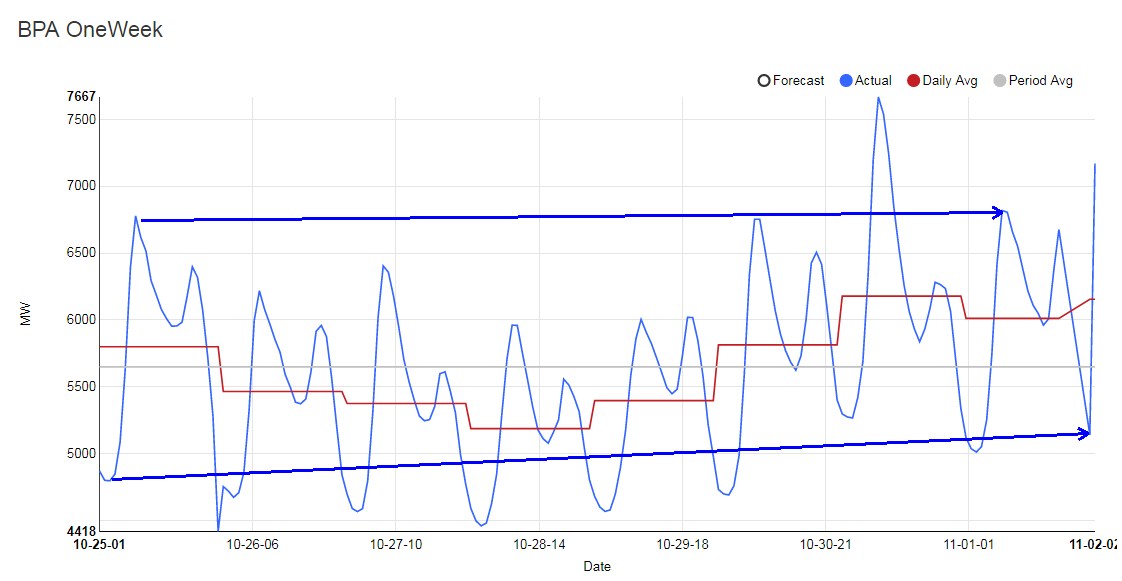 BPA’s minimum loads have rallied over the last week its peak load is almost unchanged – a possible driver of these tight On|Off spreads. With the impending cold, however, we think those spreads may widen, but let’s look to term markets before making any calls.

Nothing red in the actual temperatures, mostly just comfortable and not reflective of 12k heat rates, either. 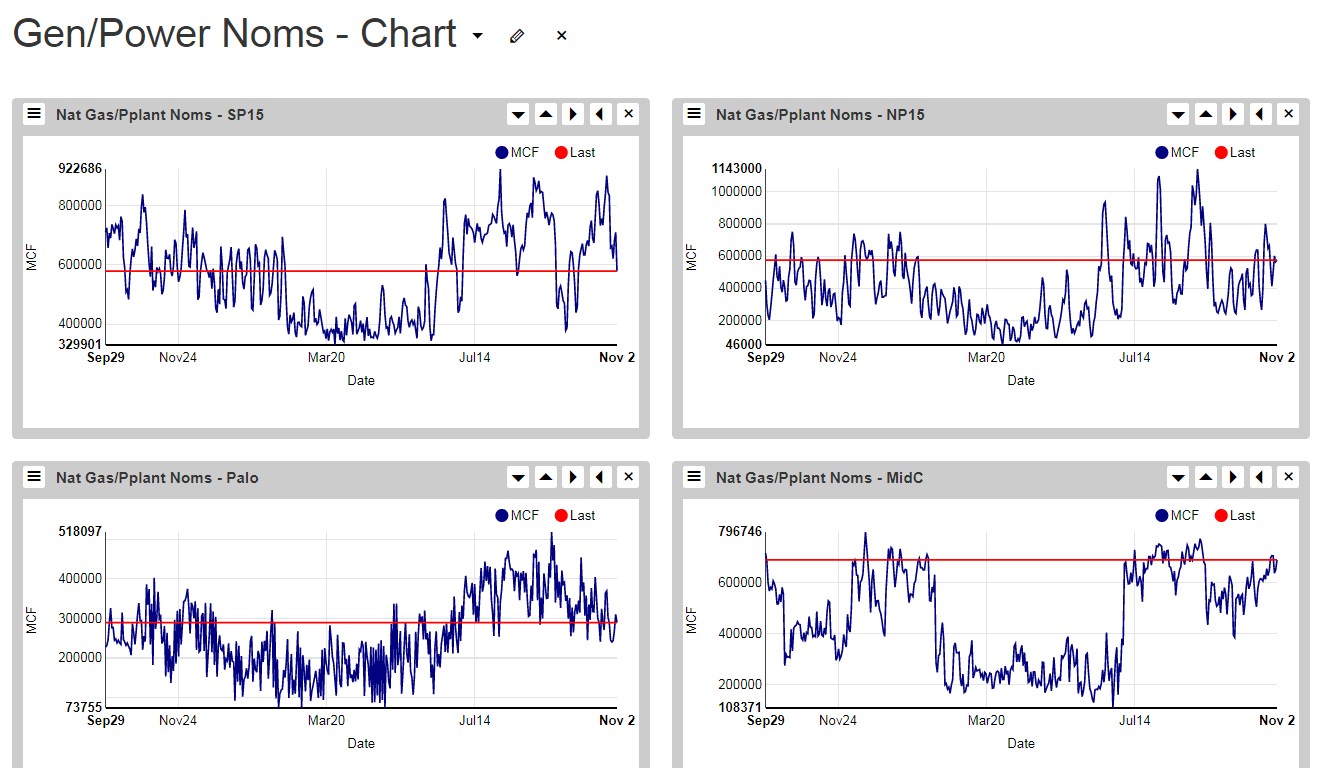 We showed the gas outage chart in the opening paragraphs; the above is a new dashboard that breaks out the outages by type (Planned or Forced) and sorted by outage MW descending. We like it, easy to see what’s happening in the outage world. 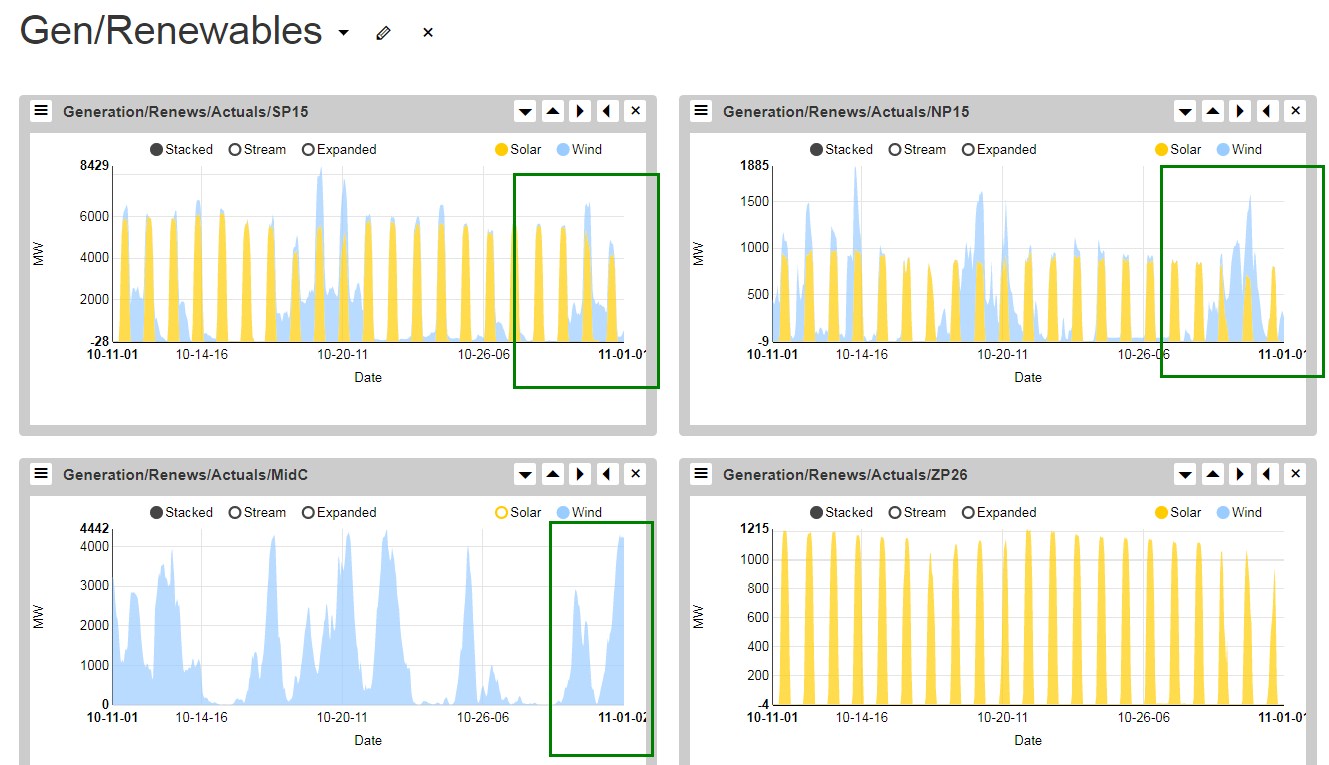 Changing weather usually means increasing wind and yesterday was no exception – it blew hard across the WECC and generated close to 8,000 MWs on some hours yesterday. Again, makes those heat rates look even dumber. 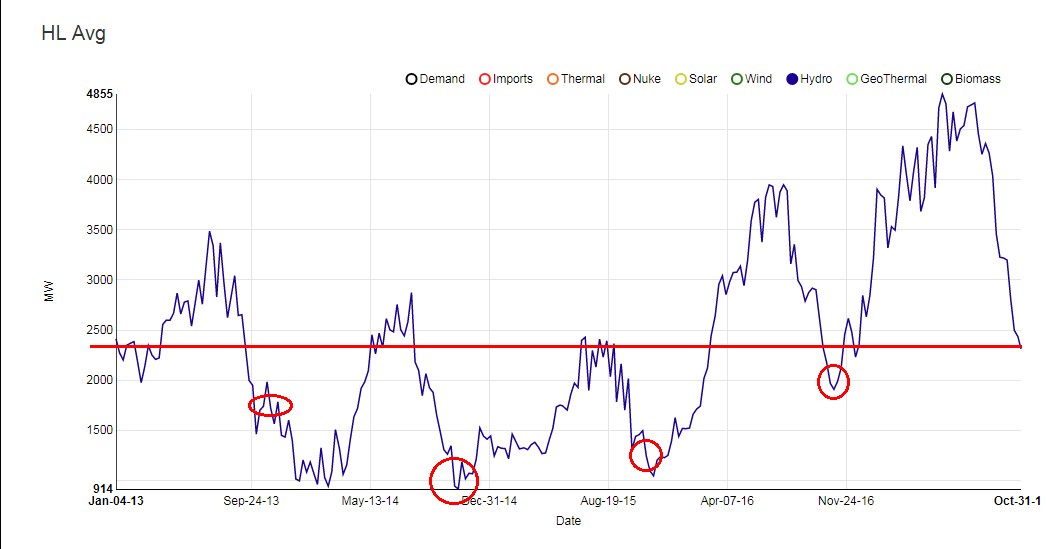 The above chart plots average ISO HL Hydro energy by day for the last four years and provide a guide on where the SysOp is today versus prior years — it is well above the drought years of 2013-15, but barely a few hundred MWs over last year.

These charts break out that hydro by Hour Type, and as expected, after rallying a touch to serve the heat wave, all indices are back to falling.

Moving north, the above plots actual energy in the Northwest; the table at the right summarizes capacity and outages for a few of those plants. That capacity data is updated hourly. The chart is interesting, note the rally in Min Energy while the Peak is relatively flat. Speaks to those early morning heating loads.

We released the STP report on Tuesday but wanted to comment on the year-on-year. This is a strange chart; prominent negative anomalies in the front and even more significant positive anomalies in the back. Makes no sense; we’d expect the front to show a lot more energy given the coming cold weather; the back should be at par, or below, given the dryish outlooks of late. 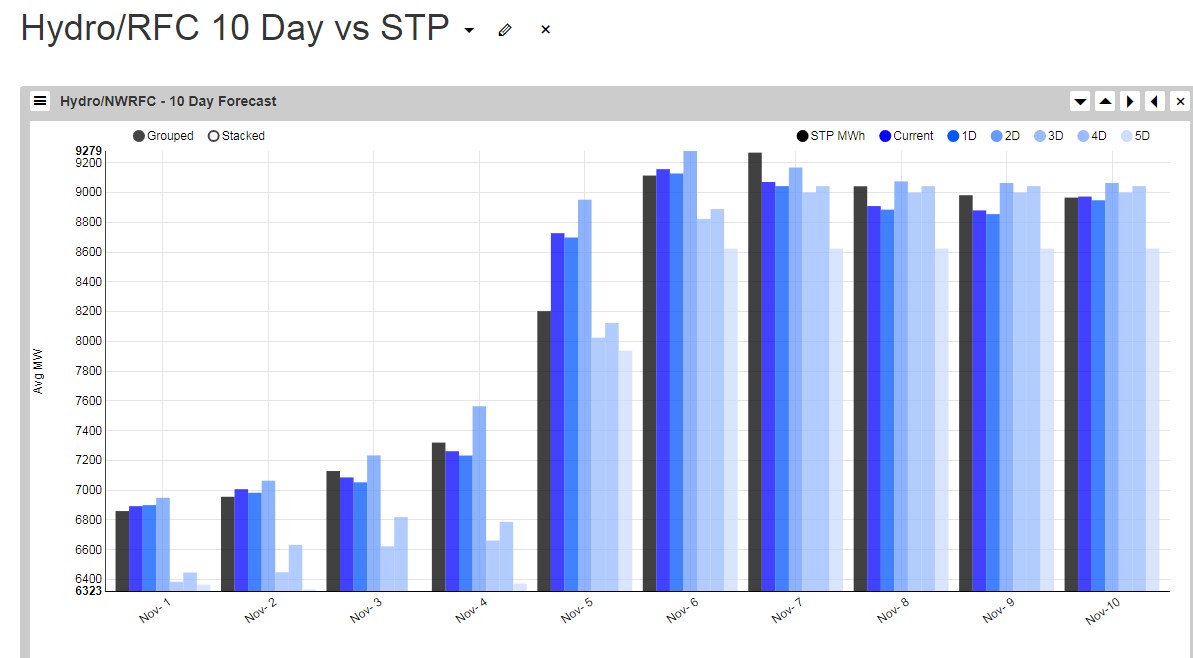 Here’s a paradigm shift; the RFC has a very tight forecast for the next few days then BAM – the floodgates are opened. Of course, this merely reflects the stiff load rally that is coming off of that cold weather.

California gets its first hint of wet, but it’s not that wet.

The Northwest has a smattering of wet days, but overall the region is below average. Take note of days 11-20 – those are bone dry and almost gets us to Turkey Day.  Hhhmmmmm – Q2 anyone?

The Northern Intertie managed to flow an average of 0 MWs over a 24 hour period yesterday. That is like going to Costco and trying to buy exactly $100.00 of stuff, including sales tax. We think they are preparing for this cold weather, it will be even colder in BC, and they don’t love the mid-20s at MidC. We’d be soaking up all the Next Week, and BalMo, we could get our dirty paws upon.

Palo flows into the ISO continue to fall, which is odd since the ISO daily clears are strong, and the hub (Palo) is fundamentally weak. Also a bit strange were the antics on the AC line – despite a slight derate the owners didn’t hit TTC once yesterday.

Speaking of derates, the AC is scheduled to shed a 1000 MW of capacity on Monday and Tuesday, the days when the cold first arrives. Nice timing, BPA.

Lots of exciting things taking place. In a post to follow later this morning, we’ll discuss Term WECC opportunities. Until then, enjoy your morning.