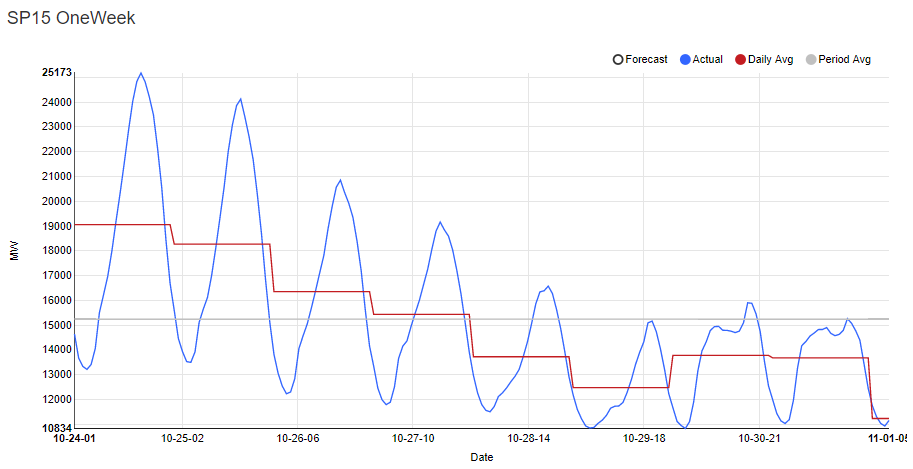 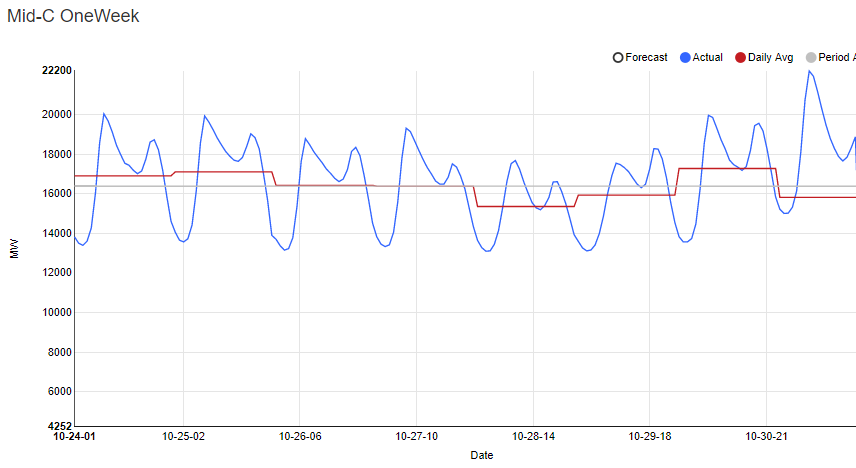 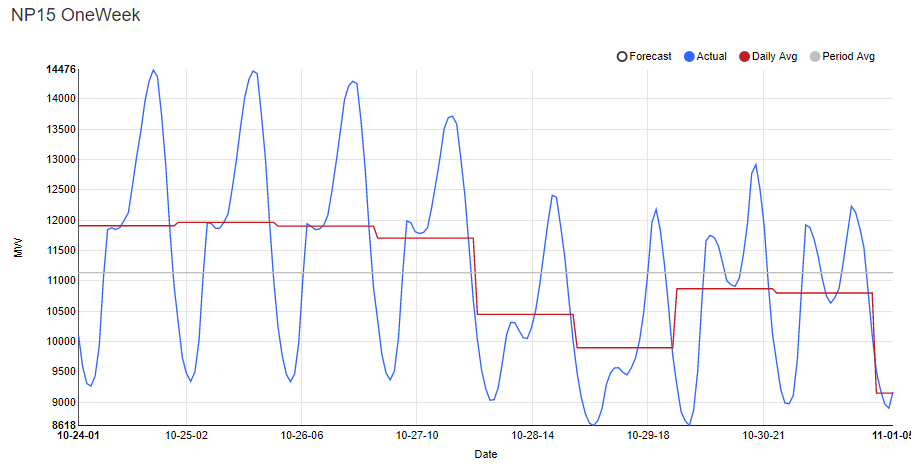 Average NP daily demand decreased day-on-day, though just 70 MW made up the difference from Monday.  Peak loads fell nearly 700 MW however, but that difference was partially made up by the 350 MW increase in light load.

It’s the first day of November, and the 10-day average temperature forecast reflects that well as a majority of stations report cooler than normal temps, especially in Mid-C.   Alternatively, the Southern half of the Rockies is trending warm as Salt Lake pushes close to 3 degrees above normal for its 10-day average.

It’s not going to affect demand much, but Billings is showing temps set to plummet dangerously close to single digits as the 5th is projected to fall to just 11 degrees.  The Northern Rockies will be plenty cold enough for snowfall. 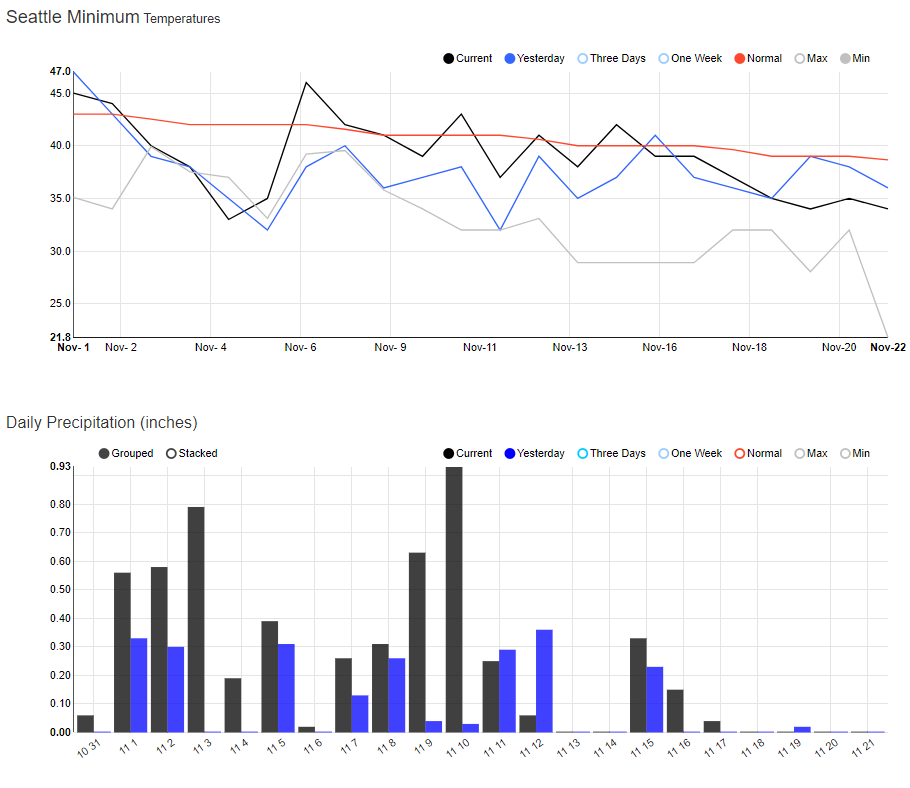 Seattle minimum temps are set to plummet from 45 today to just 33 by Sunday the 5th, equating to nine degrees below normal for that date.  Rain is also showing up in the forecast as each of the next ten days show at least a moderate increase in the precipitation forecast compared to yesterday, especially over the next three days where more than a half inch is expected for each day.

Less extreme in Portland where minimum temps will stay above normal until the 5th, even reaching upward of 8 degrees above normal by the end of the work week.  The cold front will eventually reach south as well however, as temps fall close to freezing, dropping as low as 34 on the 5th and 6th. 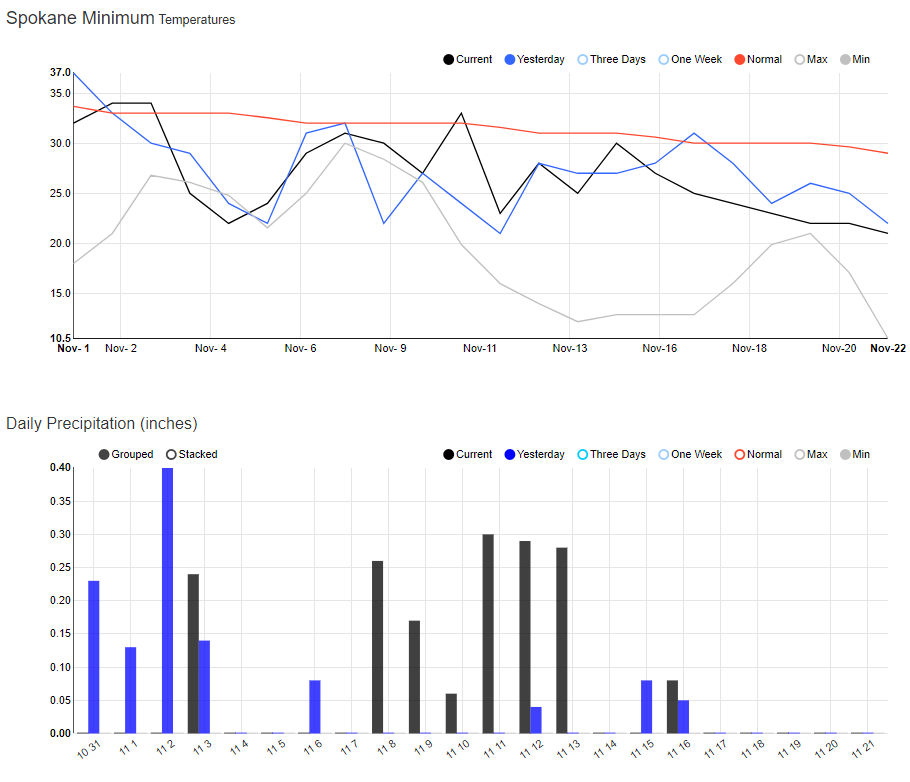 A couple noteworthy items for Spokane’s forecast.  Precipitation has largely fallen off compared to yesterday’s forecast, leaving just the 5th with significant precip.  Maybe more interesting is how that lack of precip lines up with a fairly cool forecast.  What we thought would be a potentially snowy couple days now looks dry and cold (though the 3rd retains possible snow) as temps are set to fall into the low 20’s over the weekend.

Leaving the Northwest, we still expect cooler than normal temps over the weekend, though nowhere near freezing.  San Jose should expect to see its highs fall into the low-60’s by the 4th, eight degrees below normal and four below yesterday’s forecast.

Phoenix is shifting toward warmer than normal highs for the foreseeable future, peaking at 87 this week, or six degrees above normal.  This new forecast is moderately warmer than yesterday’s, especially on the 9th which was pushed eight degrees higher.

Denver will jump between low 70s and low 50s over the following week, and could vary as much as 12 degrees above normal and 10 degrees below during the same span of time.  Keep an eye on early next week as today’s forecast calls for significantly cooler temps than what was shown yesterday.

Heavy increases for the 10-Day RFC forecast are on the way as we see movement from 6,847 aMW to 9,056 aMW over the next ten days.  STP mostly keeps pace, though falls slightly behind during the middle of the forecast as the 10-Day calls for an additional 700 aMW on the 5th of November.

Brownlee was the biggest mover once again after it added over five feet week-on-week, and nearly two feet day-on-day.  Despite the increases, the reservoir sits well behind levels from the previous five years, even failing to come within eight feet of the next closest year (2012).

Brownlee has been sitting at a 10-year minimum since early September, but has been adding elevation in earnest since the beginning of October.  We should see a return to average soon if the slopes continue to pace the way they have.

Most of the ISO gas outages that had returned over the past week once again came offline nearly overnight as nearly 1,500 MW was added to the outage count from Monday to Tuesday.  Hydro also added 750 MW in the same span of time, pushing the total outage increase to close to 2,400 MW.  In the same span of time, we also saw wind outages cut in half, while Bio took a significant decrease as well. 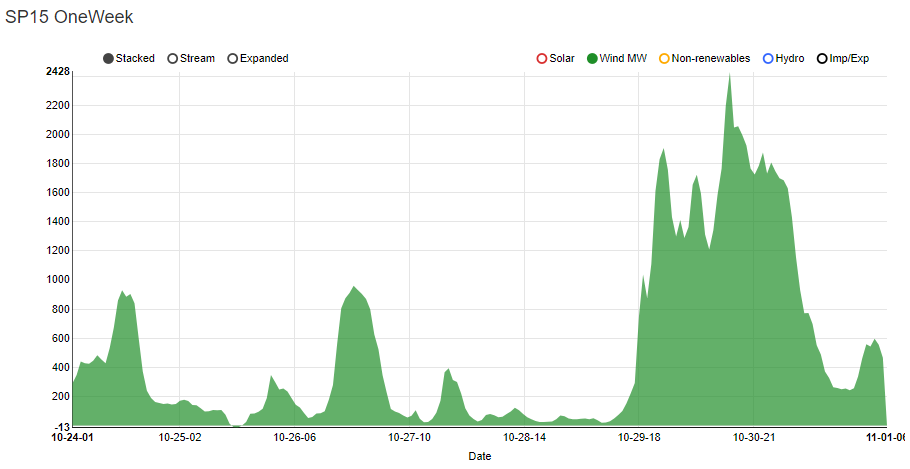 Wind generation fell off yesterday after seeing several peaks above 1,500 MW over three previous two days.  Despite the drop, wind still reached above 1,000 MW during several hours, enough to finish on top of most days from the previous week. 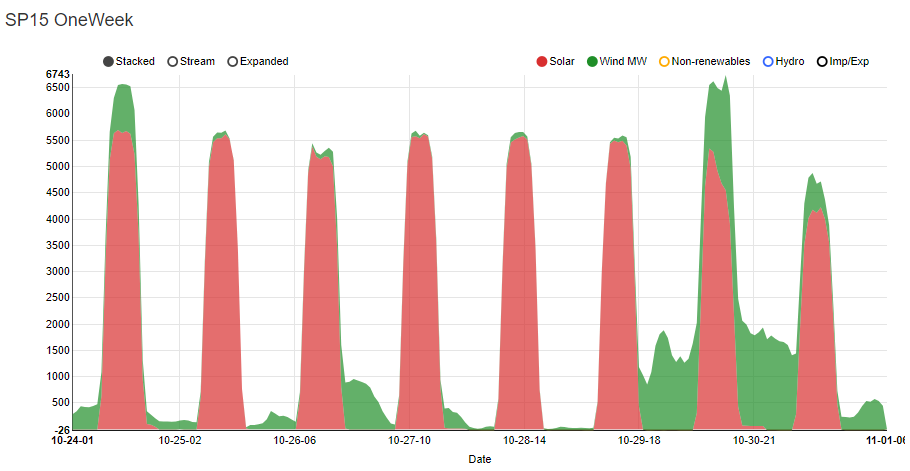 Solar fell off yesterday as well, reaching just 4,225 MW at its peak, down from 5,343 MW the day before.  Wind made up part of the difference, though even when combined, renewable generation came up short of all days from the previous week. 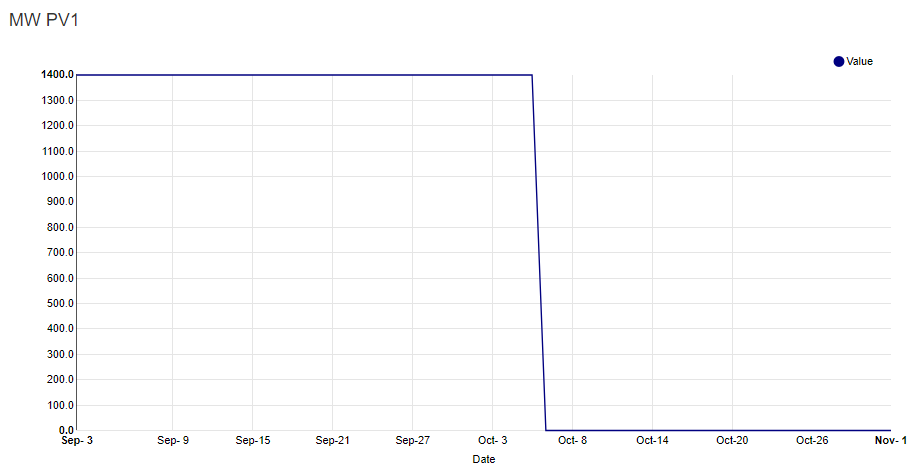 PV1 remains offline, though it’s approaching the limit of most planned outages, suggesting its return should happen relatively soon.