We recapped the fundamental outlook in an earlier post; now we will review the front-end term market using Ansergy’s proprietary “APT” technology to find hedging/trading opportunities. APT is a “fade-based” system that looks for anomalous market moves and recommends taking the opposite side. How good is it? The following tables recap the strategies performance over the last two months:

Everything but locational spreads has been “right” over 70% of the time, but even the spreads have posted a positive MTM despite being right just 48% of the time. Most of the losses from the spread positions arose from the recent blow-out in the ISO; everything ISO has rallied sharply and provides fodder for APT in today’s blog.

In this view, we look at Win/Loss % and Margins (kbtu/kwh) by location; the spreads performed the poorest (except for the NP-SP, which was right an astounding 80% of the time). Though the location spreads were not right > 50% of the time, everyone made money meaning when APT is right it is often “really right.”

In a rising market, it usually is career-suicide to short; the market has been bullish of late yet APT has still called 63% of the short-side markets right. To view all of the backcasts, click here.

The following table summarizes all of the front-end APT products (months) sorted by TradeRank:

The highlighted PIDs (Product IDs) are discussed below: 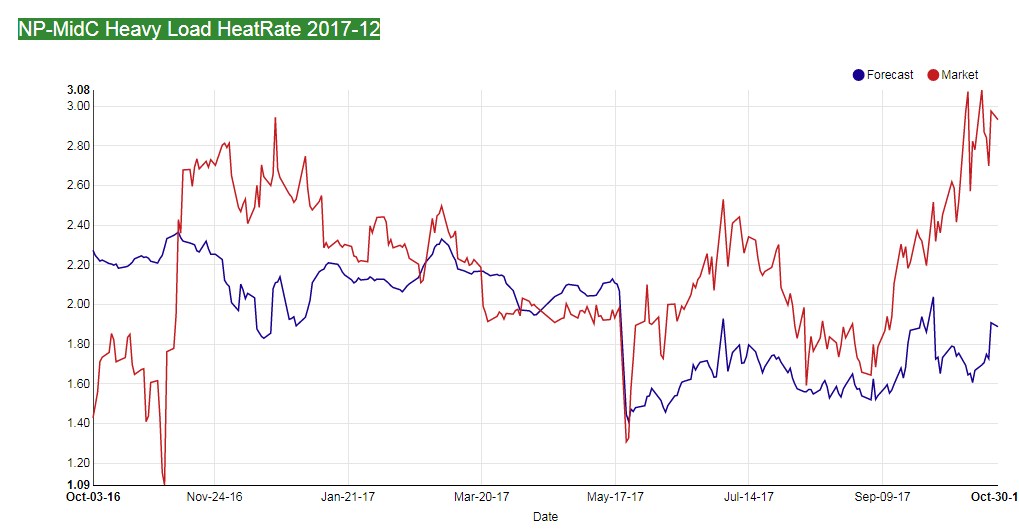 We anticipated the spreads blowing out after cash exploded last week; this NP-MidC confirms that suspicion. This a Dec spread which makes it a more attractive fade given that you’ll have thirty days to wait for cash to tighten. We think you’ll see that as soon as the first week of November when Seattle drops into the low 30s. If not then, how about when the DC returns on the 19th? The risk here is another big heat wave hits California (low-risk) or a biblical flood pounds the Northwest (higher risk, but still low). Worst case, it seems, is the spread drifts sideways, and you chew up VaR, then take it to cash and liquidate it for a few pennies. 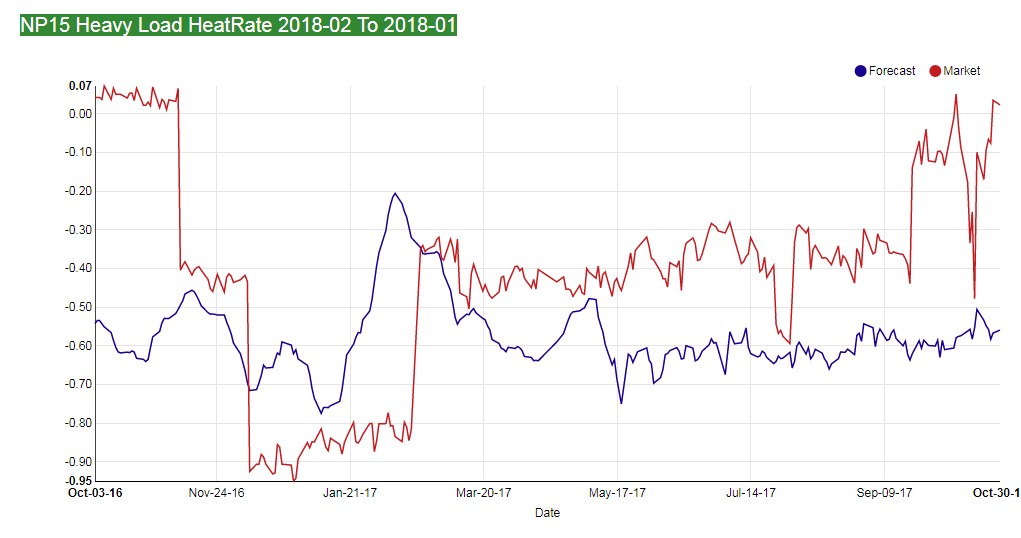 APT looks at it all, this one is the NP roll from Jan to Feb. The market really loves the Feb, of late, relative to Jan. If you have an explanation for that, please let us know. Look at the insane volatility over the last month; now it’s at a contract high and is ready to implode. 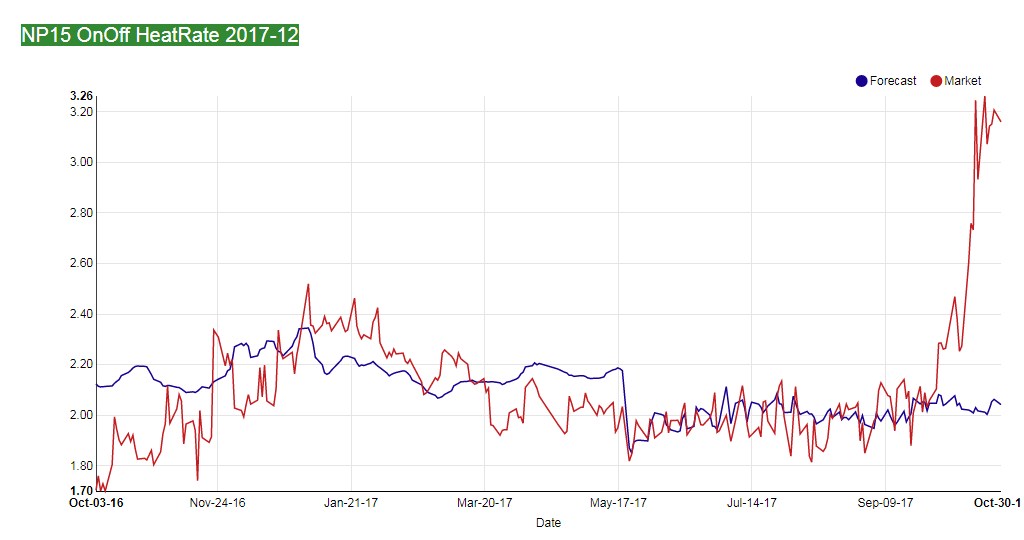 An On|Off spread for Dec at NP15; we are kind of picking on NP, but that shouldn’t come as a surprise, not given the violent ISO cash last week. Markets tend to project the only reality they know (cash) onto everything in the future. They’ve blundered on this in the past, and they still do. This product is massively over-priced unless there has been a paradigm shift in fundamental reality; there hasn’t, and it is. One explanation is the big on|off from last week – that made sense, LA was 103 and night time was 66. What happens when 6:00 AM is 35 in Sacramento and 4:00 PM is 66? You think LL won’t show some love all the while Solar is pounding on the heavy? hello. 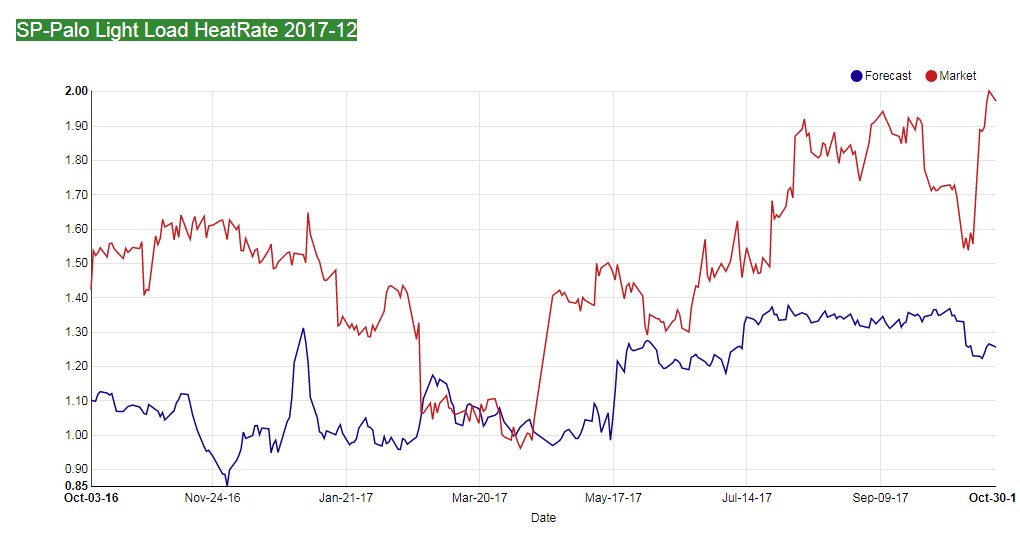 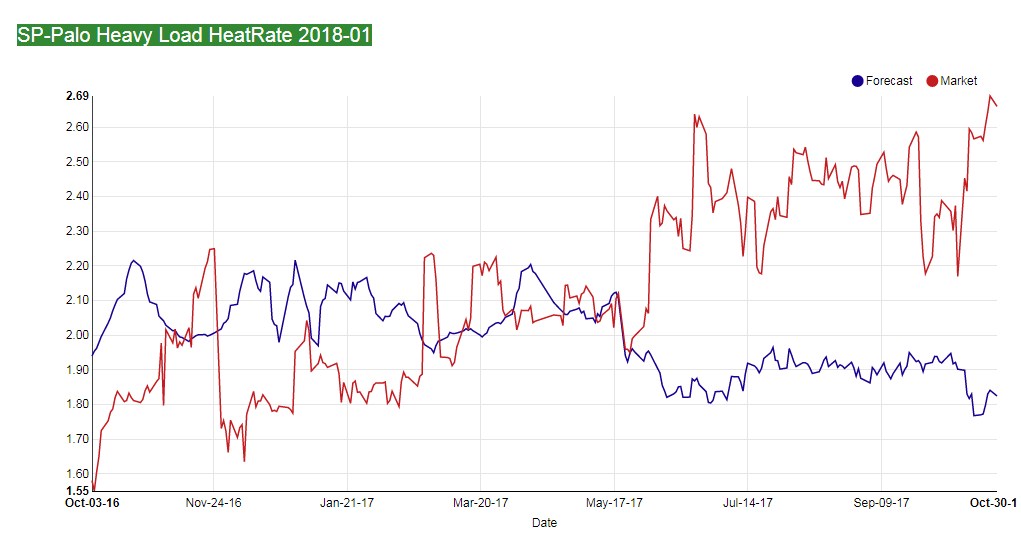 We posted both together because they are the same opportunity to fade an over-priced market. Both are SP-PVs, one is HL, and the other is LL; one is Jan, the other Dec. Pick you poison; they are both over-priced, over-hyped; all from last week’s cash. 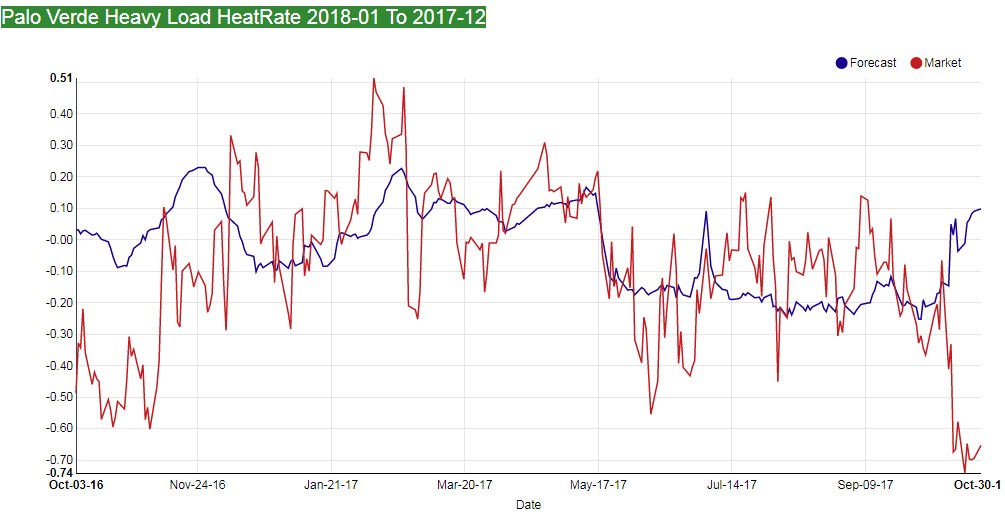 Another roll, here at PV, and the market just despises Jan but loves Dec long time. Again, if you have a reason we’d love to hear it, but you don’t because there isn’t one. Probably speaks to PV’s illiquidity more than blunders but the marks are the marks, and they had a massive shift a week or two ago. 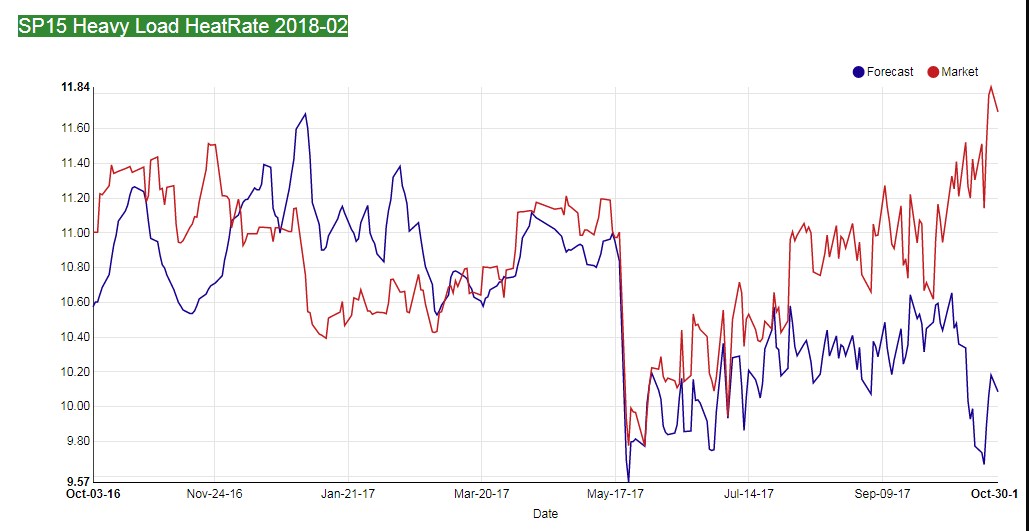 And an outright, Feb SP HL. The market got smart over the last couple of days and bid up the Feb because LA hit 103 in October — great call.

This group is sorted on WoW (Week on Week change in TradeRank) and puts the fastest moving, upward rising, trades at the top. We culled a couple to discuss (highlighted), though all are worthy of further study:

These table views are snapshots of all 388 WECC traded products, visit the APT report to view any of those products. You can also filter by Hub, derivative, hour type, period, or sentiment. We include the last 30 days of history for each product. 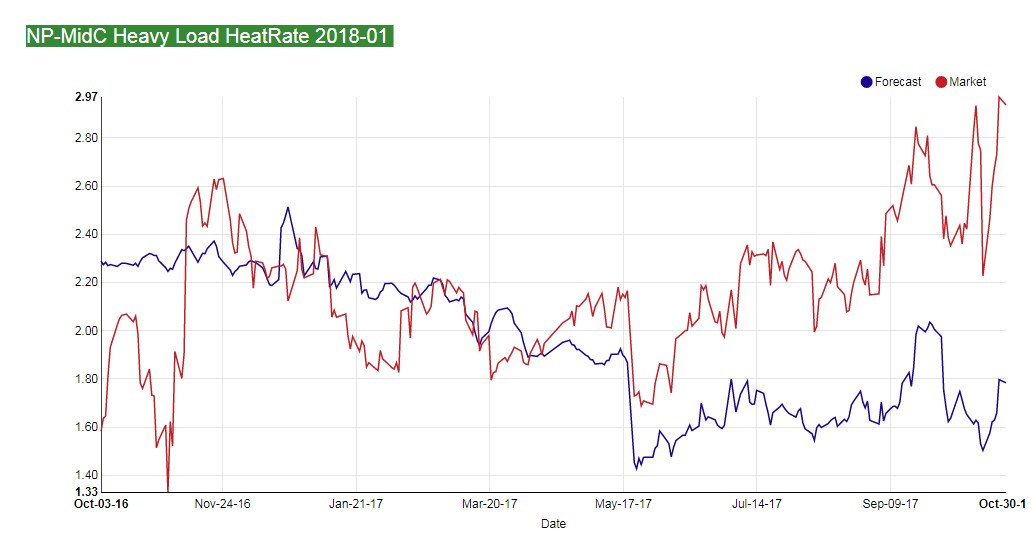 The NP-MidC Jan HL moved up an astounding 297 places in just a week, all from some sweltering LA days last week. I bet that means it will be scorching hot in January, right? We’d fade this move all day and then take a nap and wake up richer than Jeffrey Bezos. 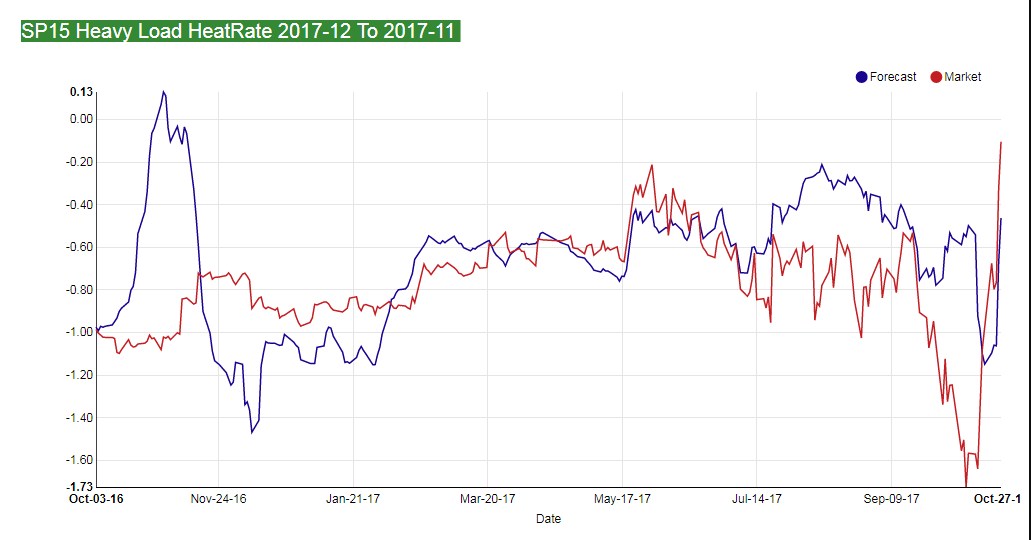 If it seems like there is a theme in today’s post it’s because there is — short the ISO. This roll has gone bonkers, and we’re going nuts trying to find a way to short it ourselves, but I guess our $40.00 of ICE Clear credits would be good for about seven watts. This is really a remarkable roll; at the height of the heat the market couldn’t get enough of the Novy (at the expense of Dec); then it suddenly realized that all of November wouldn’t be 103, no, it will be more like 63, and it quickly corrected itself, albeit way too much; now you can short it and own some Nov for free. 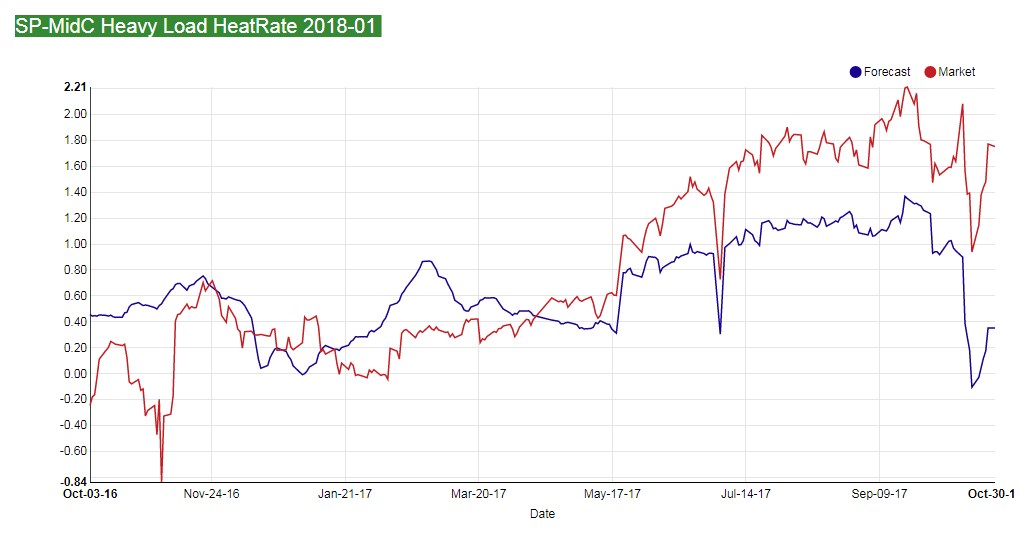 And another spread; this one to Mid-C in Jan. This isn’t that compelling, but given the recent history we’d expect a reversal, especially in front of the MidC’s mini-cooldown. 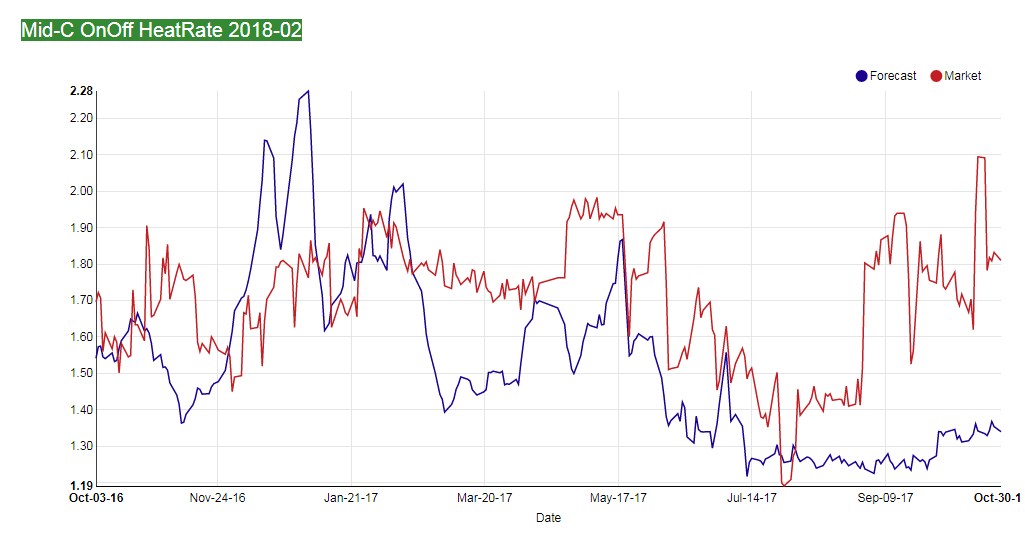 For a brief moment in time, this was a crazy good short, now its just value. 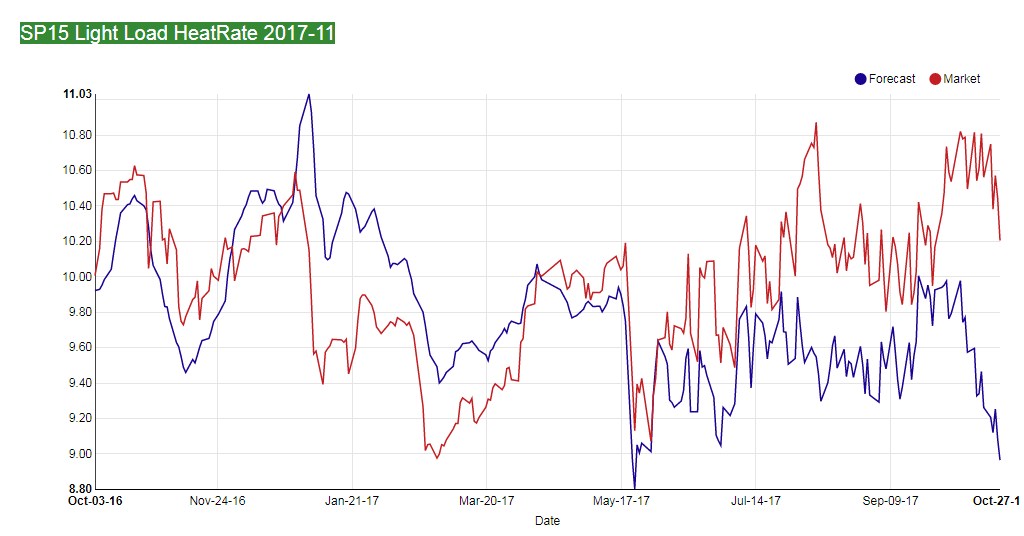 Similar story, though this one might still have some short juice left in it as SP mean-reverts to reality. 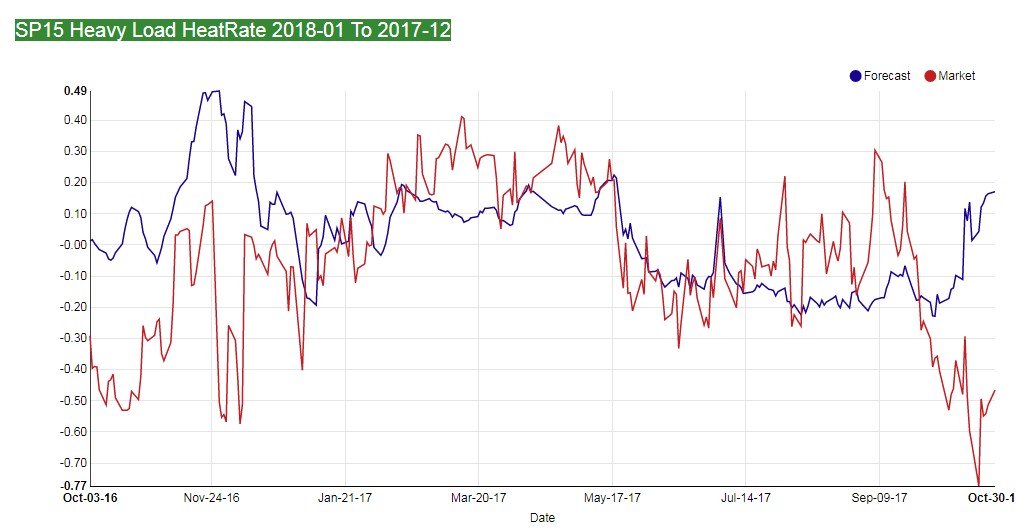 A roll we wrote about last week; we were right then and wouldn’t buy it back today.