Without a doubt, this week’s heat in the LA Basin was a singular event, one for the record books. Yet the lights remained on, the Bel-Aire swimming pool chillers kept chillin’, and the beautiful people barely broke a sweat. Signs of a healthy system, plus none of the outside hubs realized anything close to an anomaly. Now that the event has passed, let’s look at what happened.

Both NP and SP soared, each set, or approached, record high prices for this late in October. The two adjoining hubs, Palo and MidC, went along for the ride early but were just as quickly booted off the train. Mid-C, in all the confusion, let its off-peak settle higher than its on. Palo enjoyed a slight rise thanks to the infinite capacity “hype line” that connects dreams to reality.

SP congested in the solar hours on Tuesday (orange arrow), while Palo realized increasingly more HE20 congestion with each passing day; on the first day, Monday, nothing congested. The market was confused; they thought Seattle was 103, too; it wasn’t, that fair city basked in the low 60s.

The HA markets were crazier, as they should be, but note that MidC enjoyed all the congestion in that market whereas had little in the DA.  Also take note of the fact that NP and SP didn’t separate in either market, all of which speaks to the massive North|South transmission capacity. 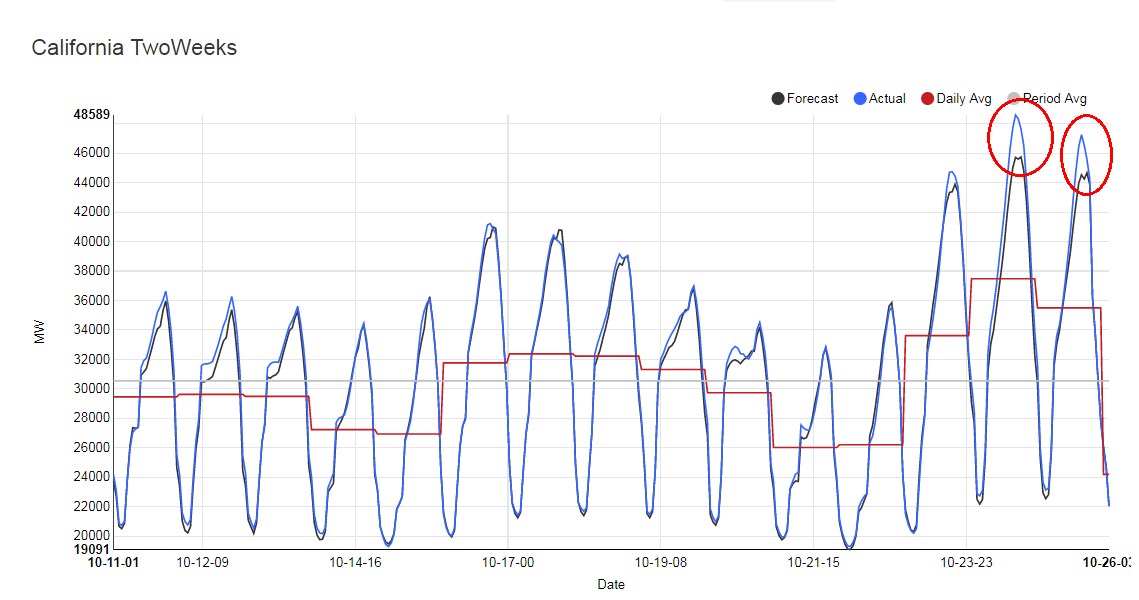 The above chart plots all of the California Balancing Authorities. Sure, you all just trade the ISO, but that market’s directly impacted by all utilities. What struck me more than the demand spikes were the massive demand forecast misses over the last couple of days. The Utes got Monday right, in fact, they slightly over-forecasted, but Tuesday and Wednesday it appears their Ouiji board was broken leaving the HA/RT markets to scramble for that extra 2500 MWs.

Both the spikes and the misses are evident in the SP chart; how about NP? 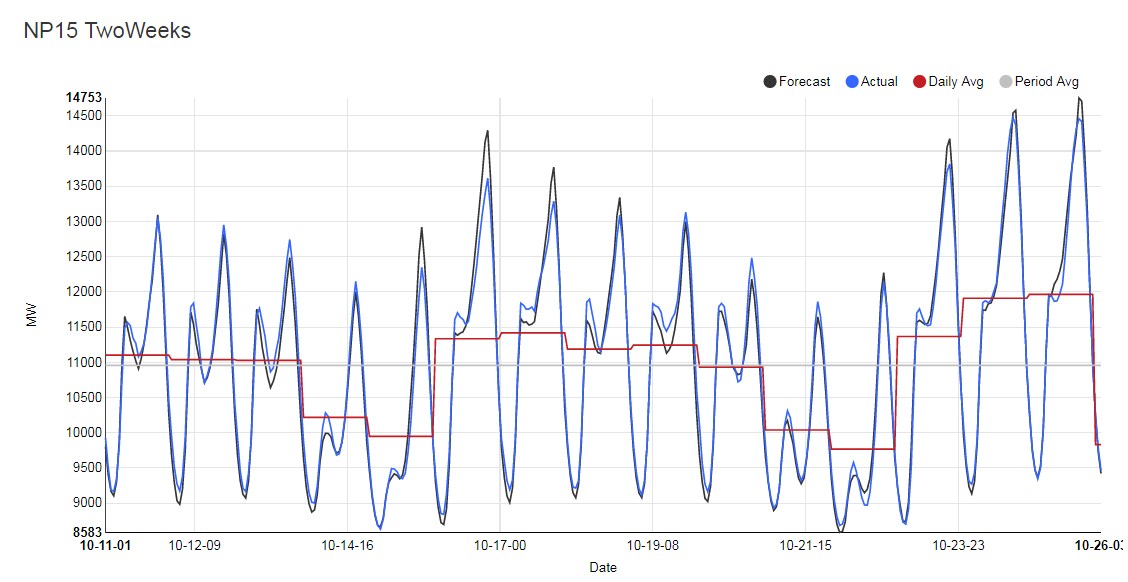 Hah! The hub barely realized higher loads than last week, and PG&E nailed its demand forecast. All of the surprises were below ZP, so I find it singular that NP didn’t congest in the HA; what am I missing? 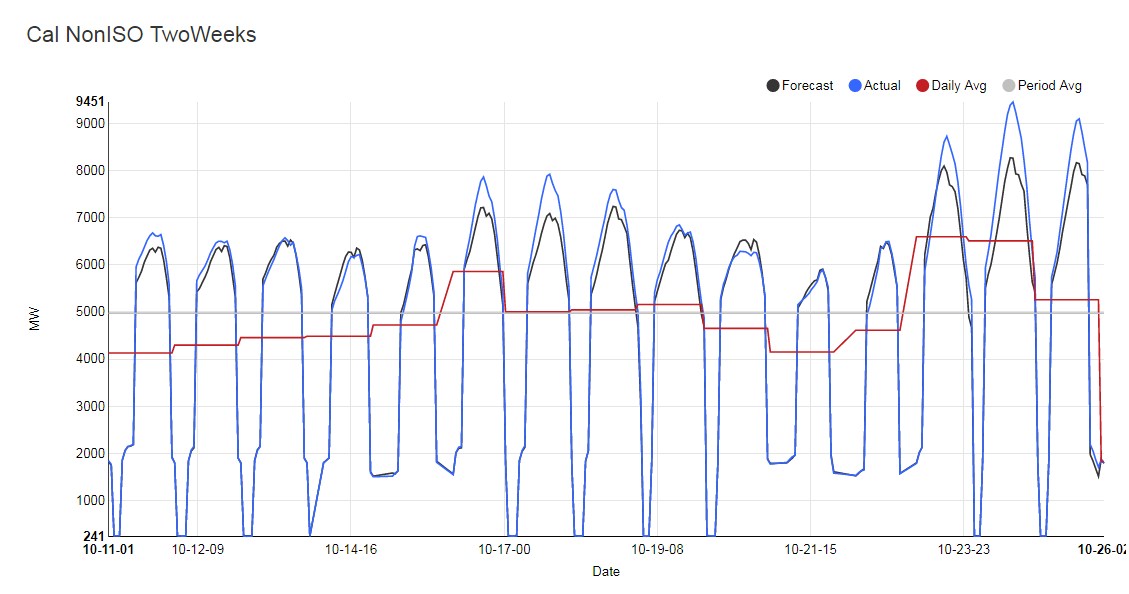 These are the aggregate loads for the non-ISO CA utes (LDWP, IID, TID, BANC). Again, big misses and a notable load spike.

That is what happened, what is set to take place? 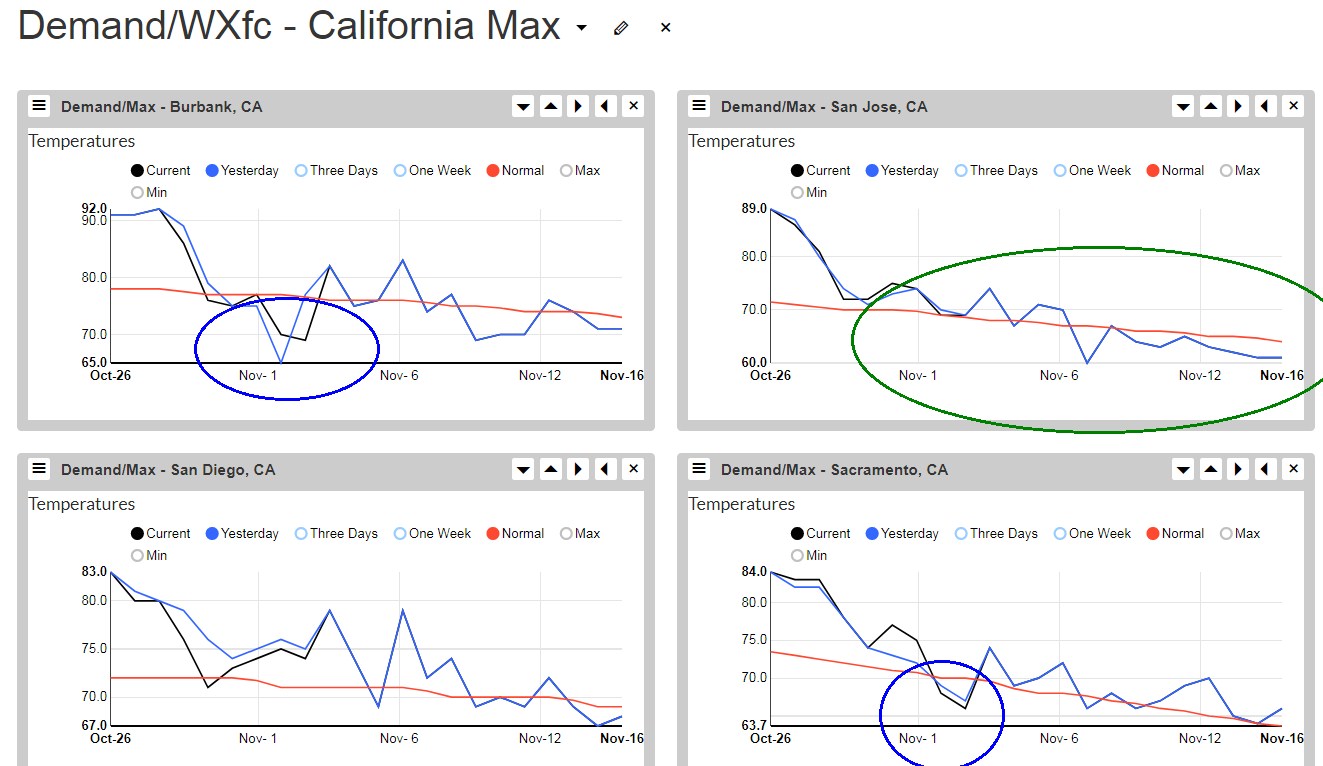 Well, the party is over with Burbank poised to taste the 60s for a high next week and the Bay Area just locked in a temperate 70 for now til eternity. 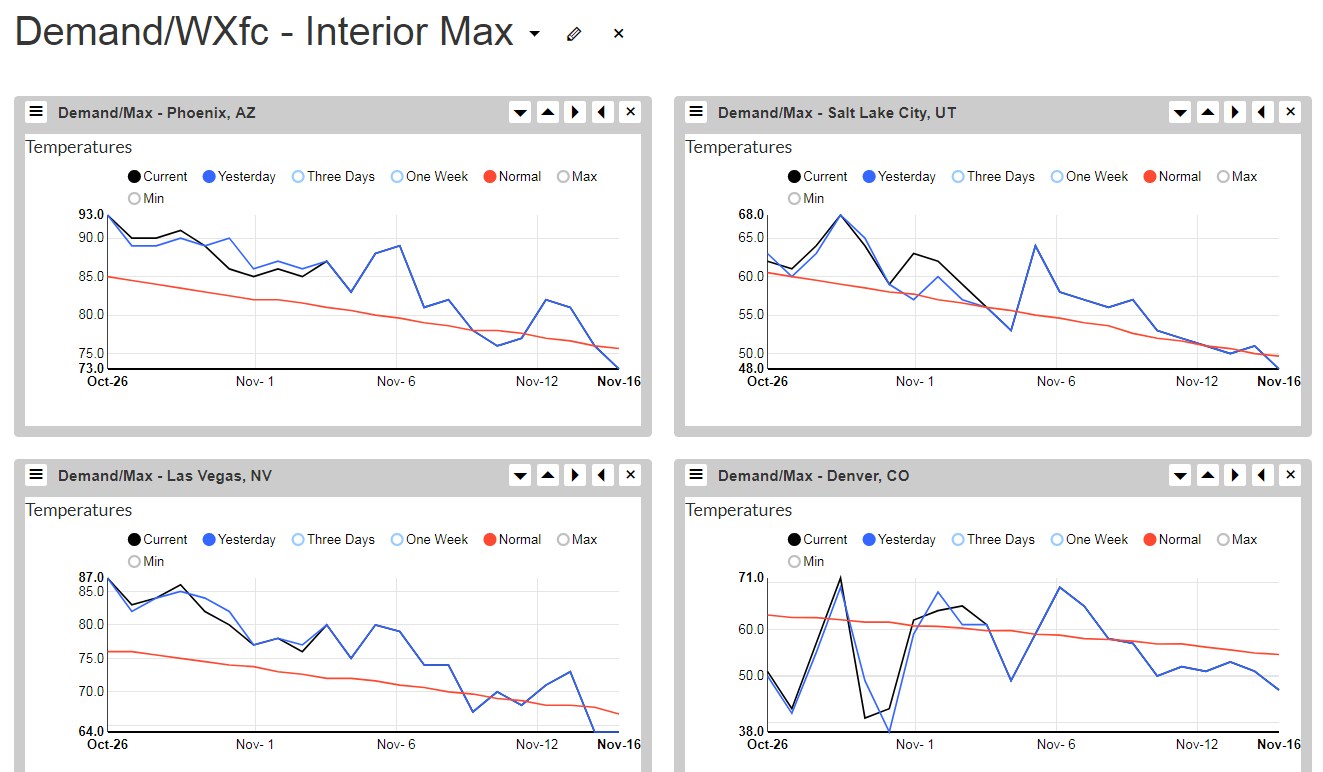 Further to the east, we see just a slow decay in temperatures with most cities above average, but that normal is a downward sloping line. Denver is going to realize some sharp morning load spikes off of chilly weather for a couple of days; that’s about it for the Interior – slow decay to nothing. 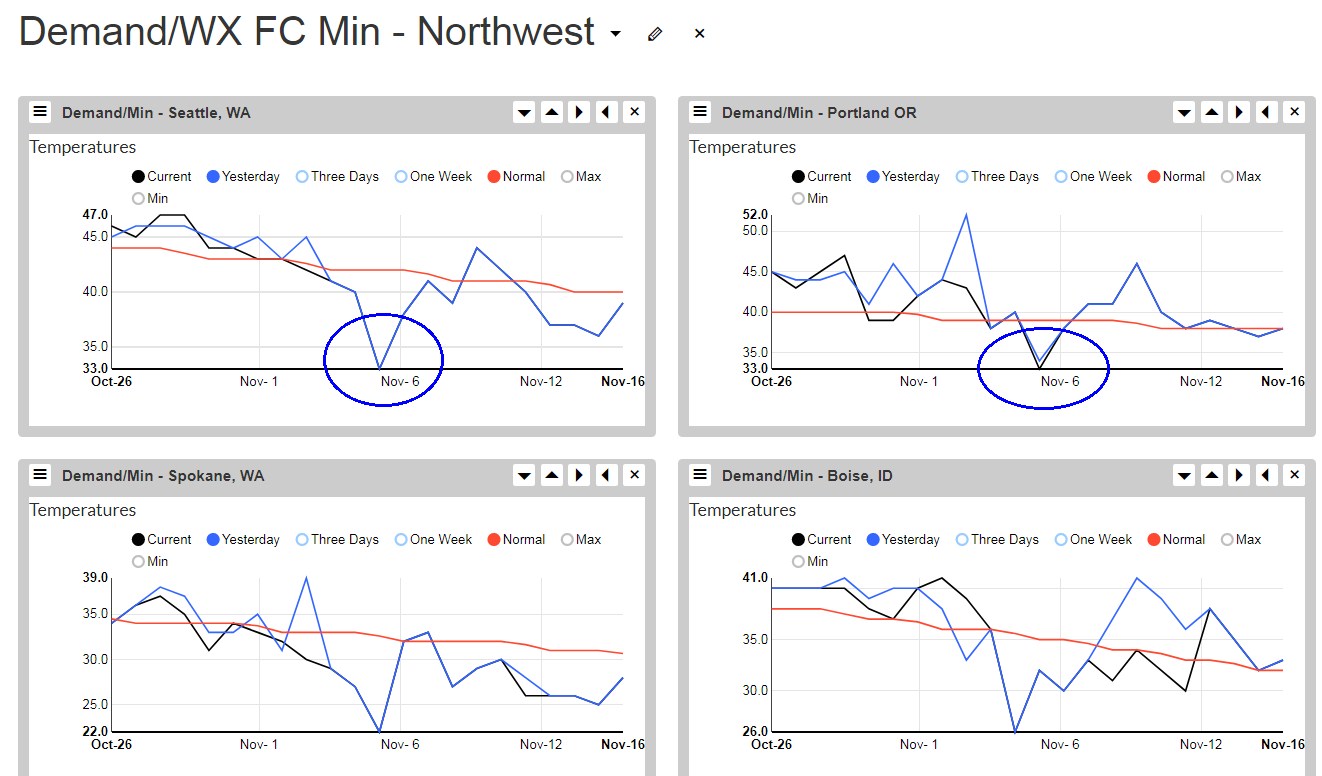 The Northwest has an event – one day both Portland and Seattle will dip to the low 30s (min temps) but, alas, for just a day and that day happens to be a Sunday. Now that will be a day that is worthy of LL > HL. 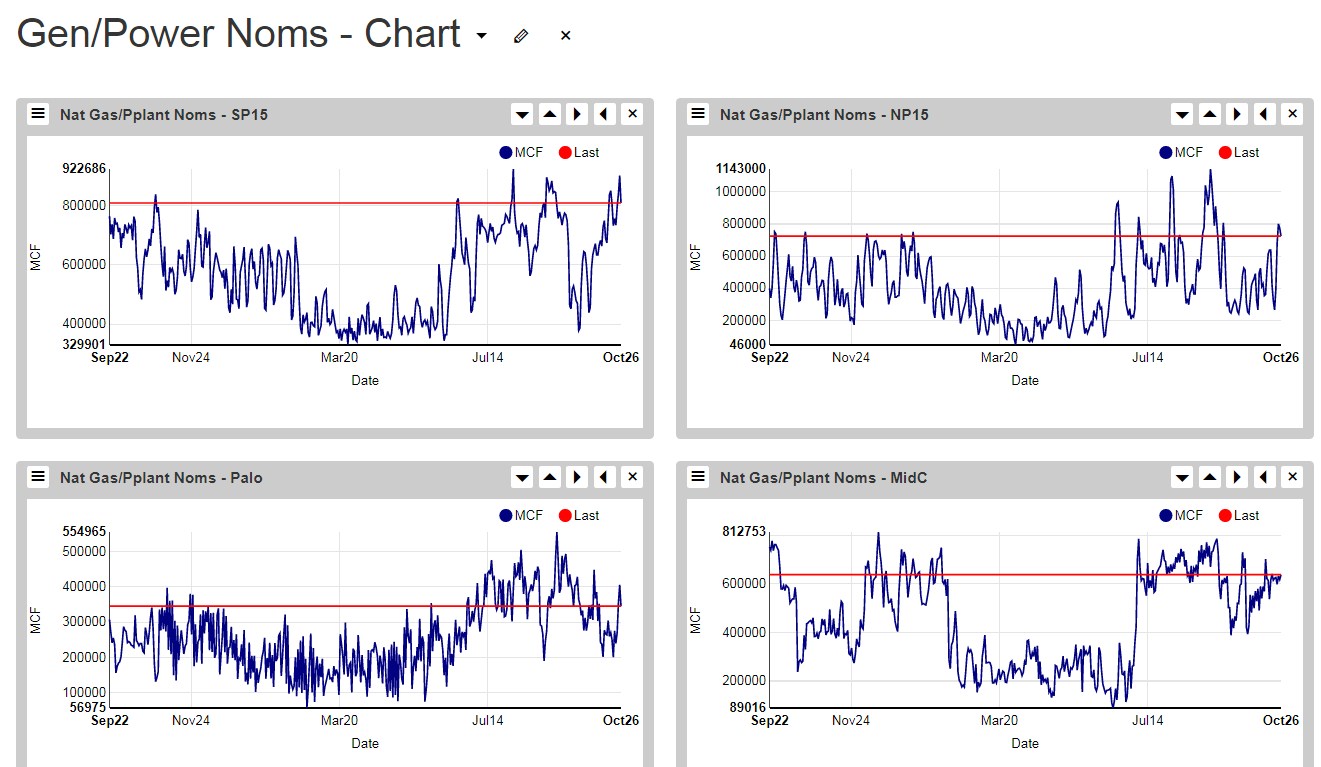 The single best report on the internet, daily gas noms by hub; it tells it all, right? SP approached a calendar high on Tuesday, NP barely moved, Palo realized a slight bump, and the MidC reflects the tight water that is typical for October. Most surprising regarding MidC is the non-impact on gas noms of losing 3000 MWs of export capacity (DC). Where did that loss of “net demand” go? 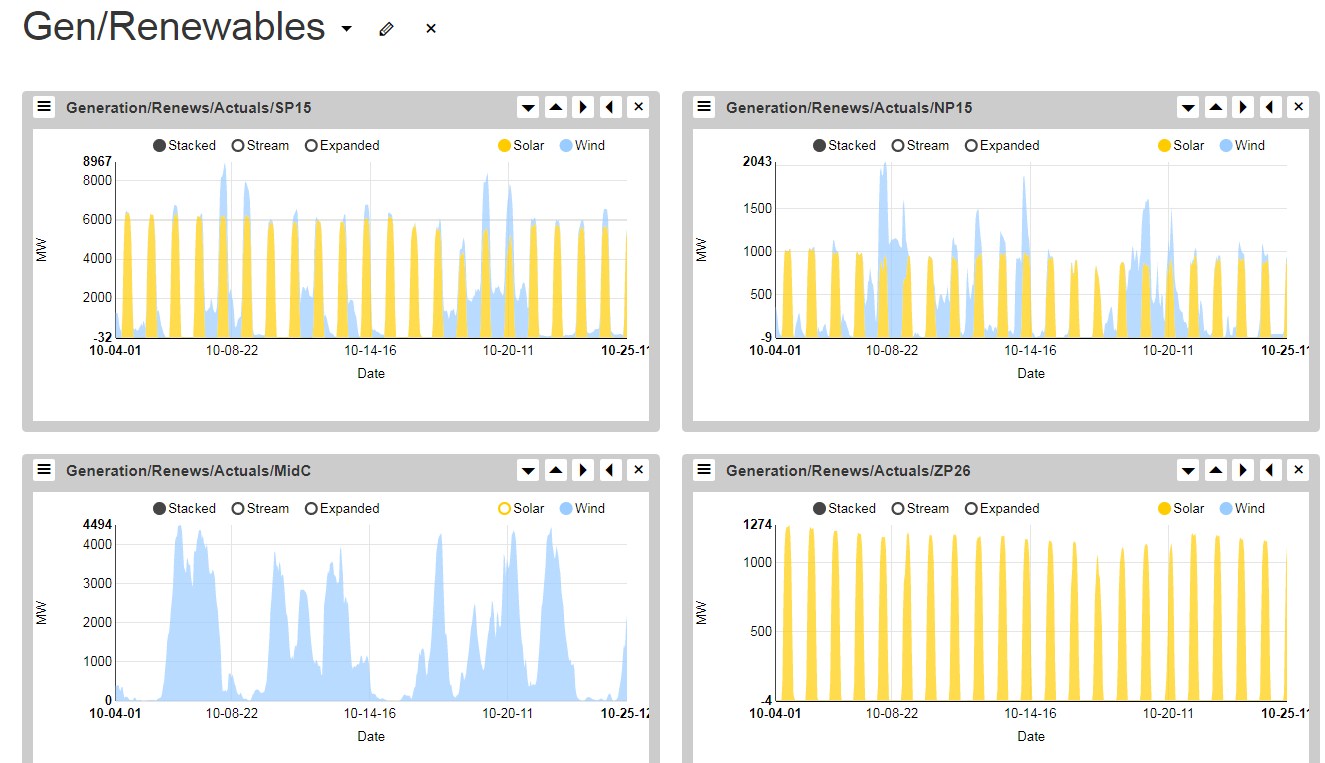 Meanwhile, the haters of renewables can point to the charts above and say “I told you so.” Just when the ISO needed that darn wind energy, it went AWOL. Oh well, I guess that happens with high pressure – it brings heat and calm. So the WECC found itself missing about ten gigs of energy just when it needed it, not that the dearth of wind affected transmission flows, it didn’t:

MidC sold its soul to the ISO, but more interesting is how stingy Powerex was with its energy. You’d think $900 HAs would cause the Canadians to flood the line as it chased price, that didn’t’ happen, the sold less than they did two weeks ago. I guess that just speaks to who incrementally fills the DC and maybe we just explained away about 1000 MWs of the Net Demand haircut? 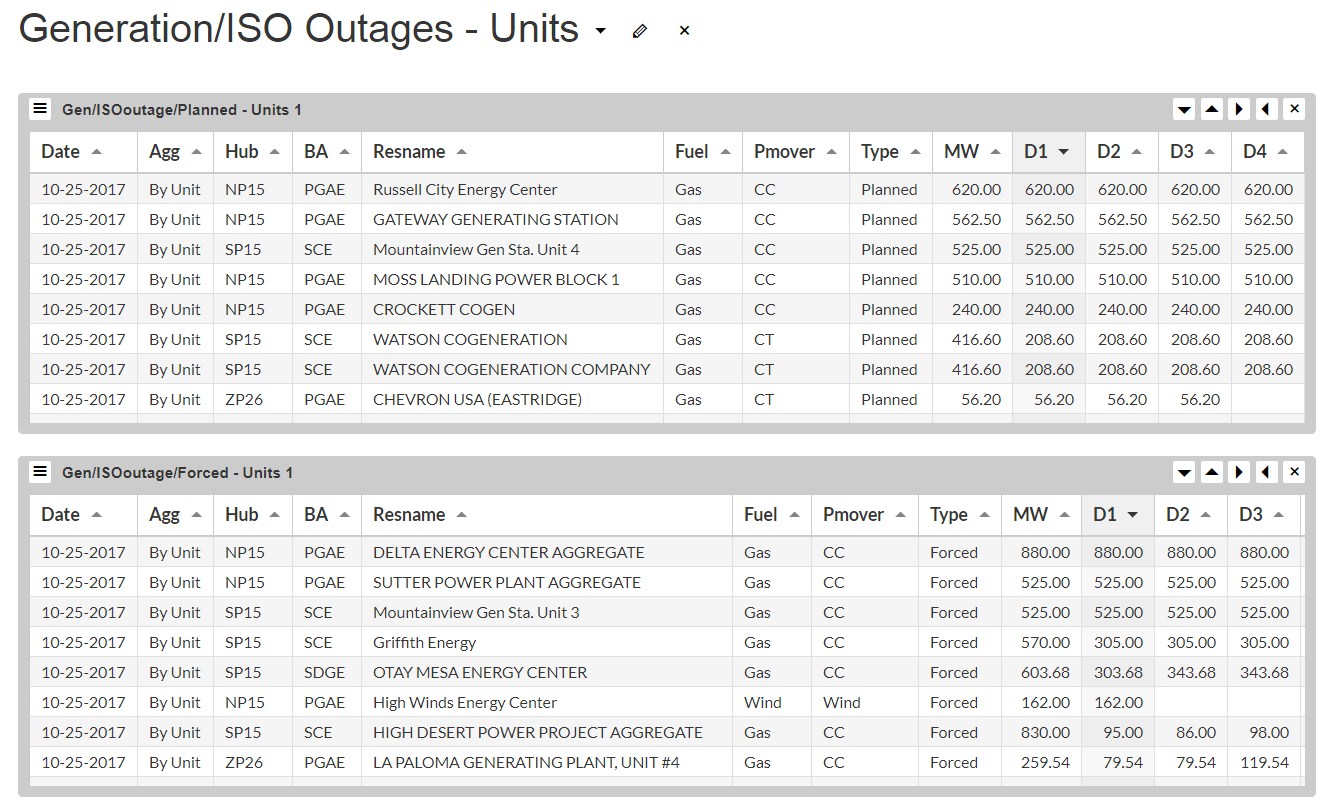 No new outages helped the ISO. I doubt any genco deferred maintenance out of altruism; those $900s were all the incentive they needed to keep the plants running. 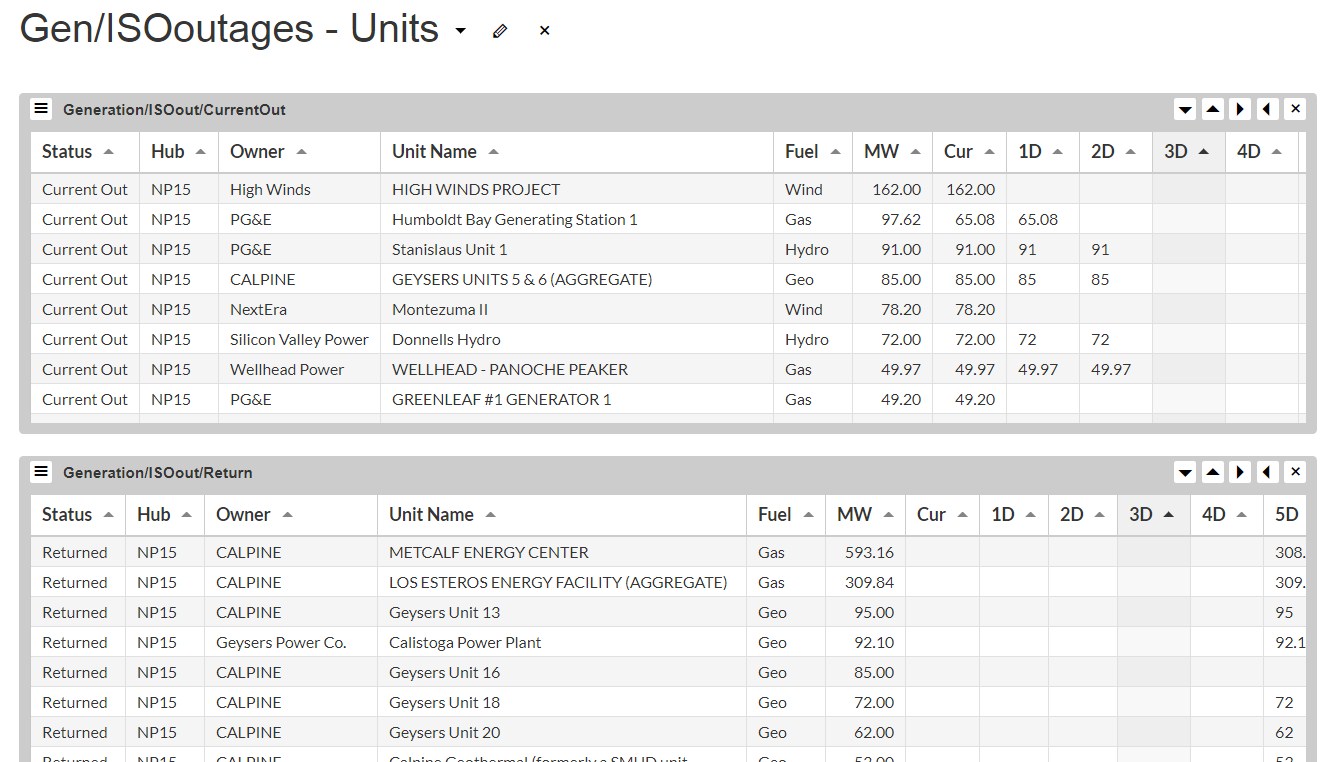 Just a few new units fell offline this week, none of them are material. Likewise, nothing returned, either. 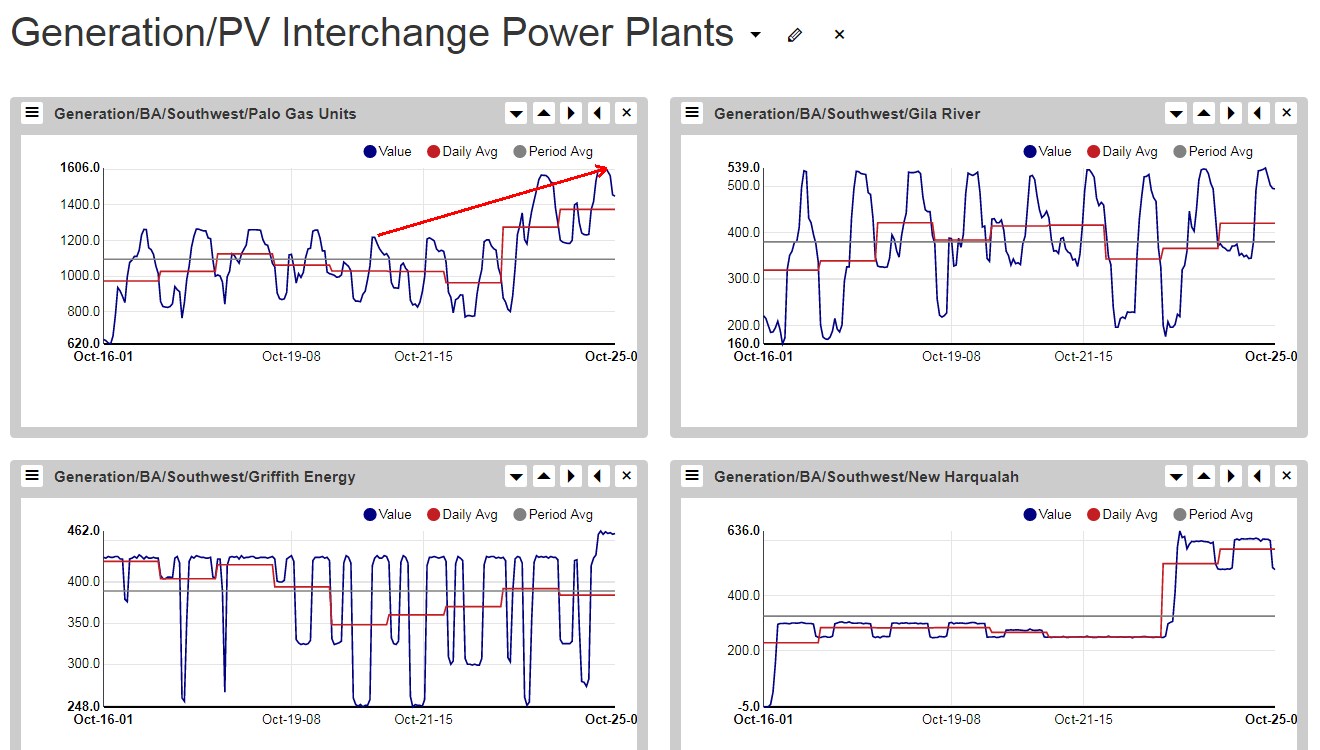 California helped itself, modestly, with its hydro system. Note the spike in energy in the first plot, Max HL energy. LL didn’t change, still, a downward sloping line which only suggests that the HL will crash at a much faster rate post-heatwave.

Further raining on the ISO parade is literally “rain.” The first storm of the season is poised to pound the Golden State into the Gray State, that is set to land next week. Note that most of the water hits the west side foothills, Sacramento gets more precip than S. Lake Tahoe.

The MId-C gets another event, but that would be more accurately called a “non-event” as every station receives less than average rain. Temperatures are cool enough to drive snow above 5,000 feet, but the hub will realize a net shortfall in cumulative precip for the next 21 days. It is still too early to care about positive/negative snow/precip anomalies but Water Years are a cumulative phenomenon, and dry is dry, so keep watching. At some point in the calendar, all of these cumulative misses will matter, just not in October and not even  in November. 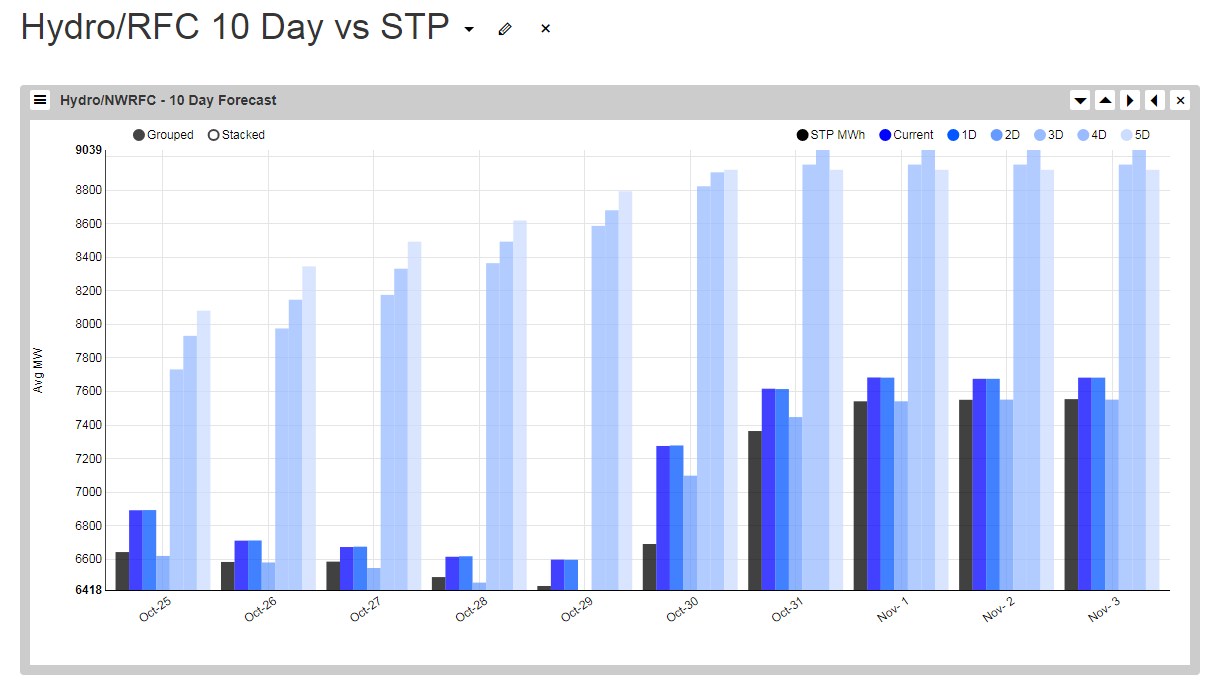 The NWRFC executed that most challenging military manoeuver, the “Volte-Face,” as they reversed all of the recent energy rallies by over a 1000 aMW. Now their “going into Novy” outlook is quite bullish. We’re confident they volte-face again, but for now the Slice guys are going to feel some pain.

And Coulee is jamming bullets into its magazine in anticipation of — what? The pond is nearly full, loads are nowhere, but this may also be BPA’s answer to the DC cut. A further explanation of where that 3000 MW DC loss has gone.

The LA heat event is over and now is the time to make money fading all of the market ripples the event caused. We will be following up on those ripples in a post to follow shortly. For now, we are bearish California (especially given current market prices ), bearish Palo, and neutral to bullish in the Northwest. Where and when will be answered in that post.