Here are today’s highlights and changes from earlier this week. 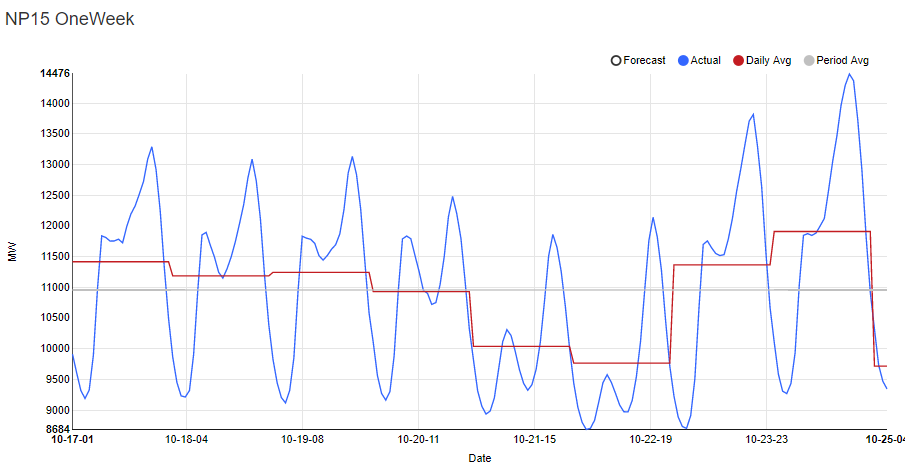 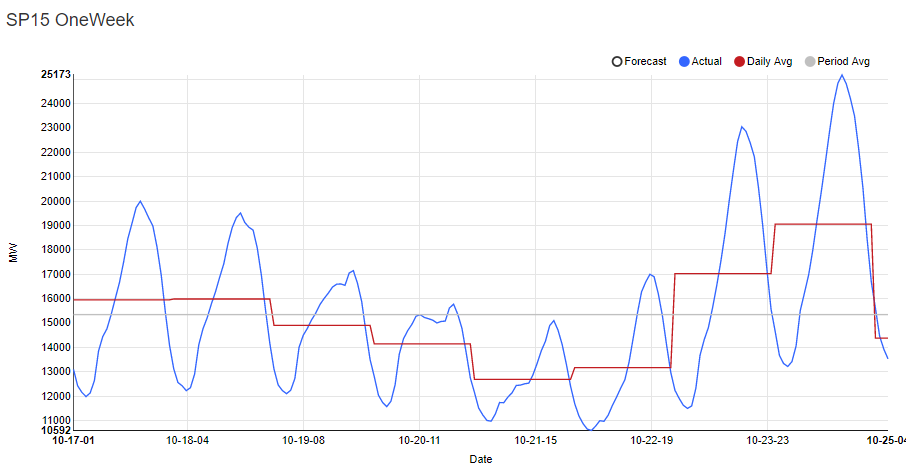 This week’s substantial cuts to both forecasts are showing up in the 10-day chart where the difference from today and last week grew as much as 2,000 aMW.  STP is expected to bottom out on the 29th before recovering 1,100 aMW by the 1st of November, though still well short of last week’s forecast (a difference of 1,400 aMW remains). 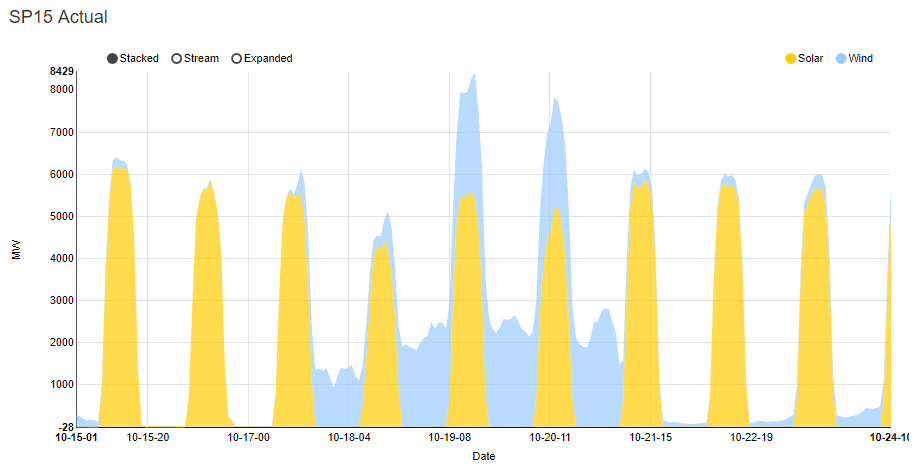 Hydro outages have held pace for nearly the past week, settling at 4,666 MW yesterday.  Gas outages came off more than 800 MW since the 20th, but remain at one of its highest levels since May.  Outside of the two major sources, Geo managed to add 200 MW online, nearly halving its outage rate, while Bio and Wind also added significant MW online.

Forecast is looking primarily hot in the West as just four stations show up less than one degree above normal over the next 10 days.  SP-15 leads the way with anomalies greater than five degrees, though NP-15 isn’t far behind as the heat lingers in Northern California as well.

Upper 80’s should be maintained for another three days in San Jose as temps push upwards of 18-degrees above normal to wind up the work week.  Highs are forecasted to stay above normal through the end of the month, while no significant cool-down is shown until November 8th (60 degrees).

Sacramento will cool down at more rapid pace as highs are set to fall from 85 today to the low 70’s to begin next week.  The 30th marks a six-degree change from yesterday as the forecast moved from 81 to 75 day-on-day.

Another day of triple digits and excessive heat warnings for Burbank as the forecast expects today to top out at 102, 24 degrees above normal and 13 above the previous 10-year high. and potentially five degrees above the all-time high for this date.

Heat should stay elevated through the remainder of the month as highs aren’t expected to drop below 90 until the 30th.  The beginning of November shows a chance for moderate cooling as temps are currently forecasted to dip to 65.

San Diego is cooling off quickly from its highs earlier this week, but remains 15 degrees above normal today, topping out at 87 (15 above normal and five above the previous 10-year high).  San Diego isn’t expected to fall below normal until the 6th of November.

Phoenix’s average as set to decrease nine degrees over the next three weeks, eventually settling in the mid-70s.  Until then it’s highs above normal as far as you can see with a peak today at 96 degrees, 11 above normal.

Denver stood out as one of the only stations with below-normal average temps over the next 10 days, and one look at its forecast shows you why.  Today is set to top out at 80, but in typical erratic autumn fashion, highs will plummet to 42 just two days later, finishing the day 20 degrees below normal.  After another brief stint above normal on the 28th, Halloween is set to reach just 38.

It’s a mild forecast for the Puget Sound, comparatively speaking, as highs top out at 64 by the 28th, eight degrees above normal, and potentially marking a new 10-year high.  60-degree days will be short lived however as the forecast calls for a sustained period of below-normal highs, eventually leading to 40-degree days in November.

Spokane’s highs are projecting in the low-60s as well, pushing close to 10-degrees above normal by the weekend before seeing the bottom fall out moving into November as highs fall to just 40 by the 6th.

On the other side of the equation, daily lows will stay mostly above normal through the end of the month, though a cold spell looms at the end of the first week of November as temps could fall as low as 22 by the 6th. 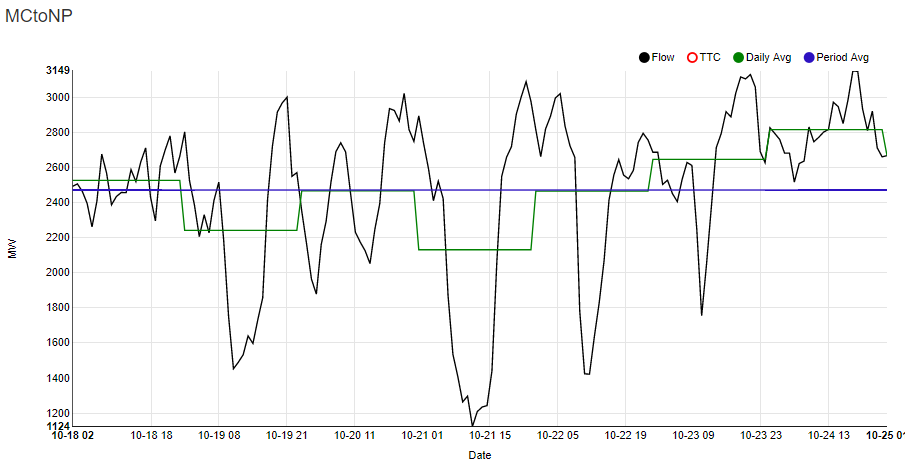 Flow increased south again yesterday as the daily average jumped 160 MW to finish the day at 2,815 MW.  Hourly flow peaked at 3,149, the highest in at least a week, while hourly flow never dropped below the weekly average of 2,471. 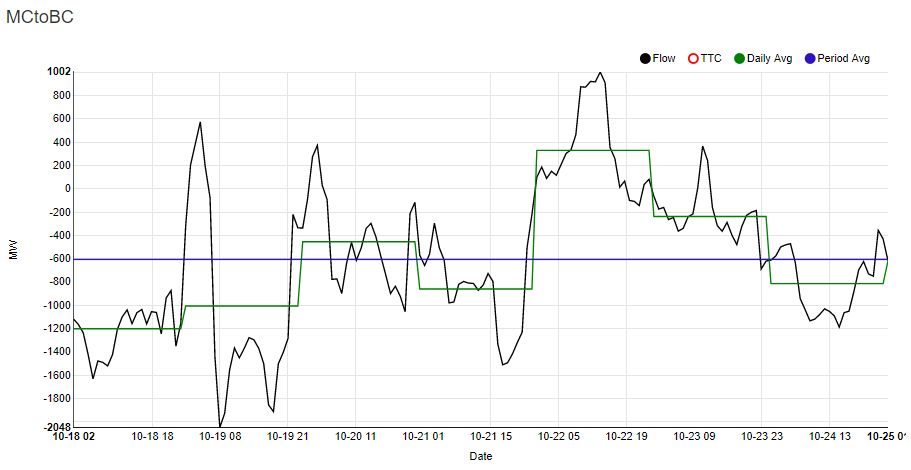 Sunday marked the first northerly-flow in terms of daily average in some time, but that was short lived as power turned south heavily, finishing yesterday with a daily average of -813 MW, a change of 570 MW day-on-day.