Before we launch into our review of front-end market anomalies, and opportunities, we like to take a look at the state of the state. The state looks interesting, especially the state of California, but the rest of the WECC states are not to be ignored, either. Let’s begin with recent cash markets:

For starters, SP cleared over NP which kind of makes sense since it was exceptionally warm in LA, given the current season. What doesn’t make sense is seeing offpeak clear over onpeak which may set up some exciting On|Off trades, we’ll comment on those later. Another development is the tightening of all WECC basis; where Sumas settled $0.70 below PG&E Citygate a week ago, now it’s $0.50, and Socal Citygate is trading nearly at par. Those gas moves should put pressure on the spreads, and the question remains whether these are freakshow anomalies tied to late LA heat or are they “paradigm shifts.” Hah, doubt that, but love the term. 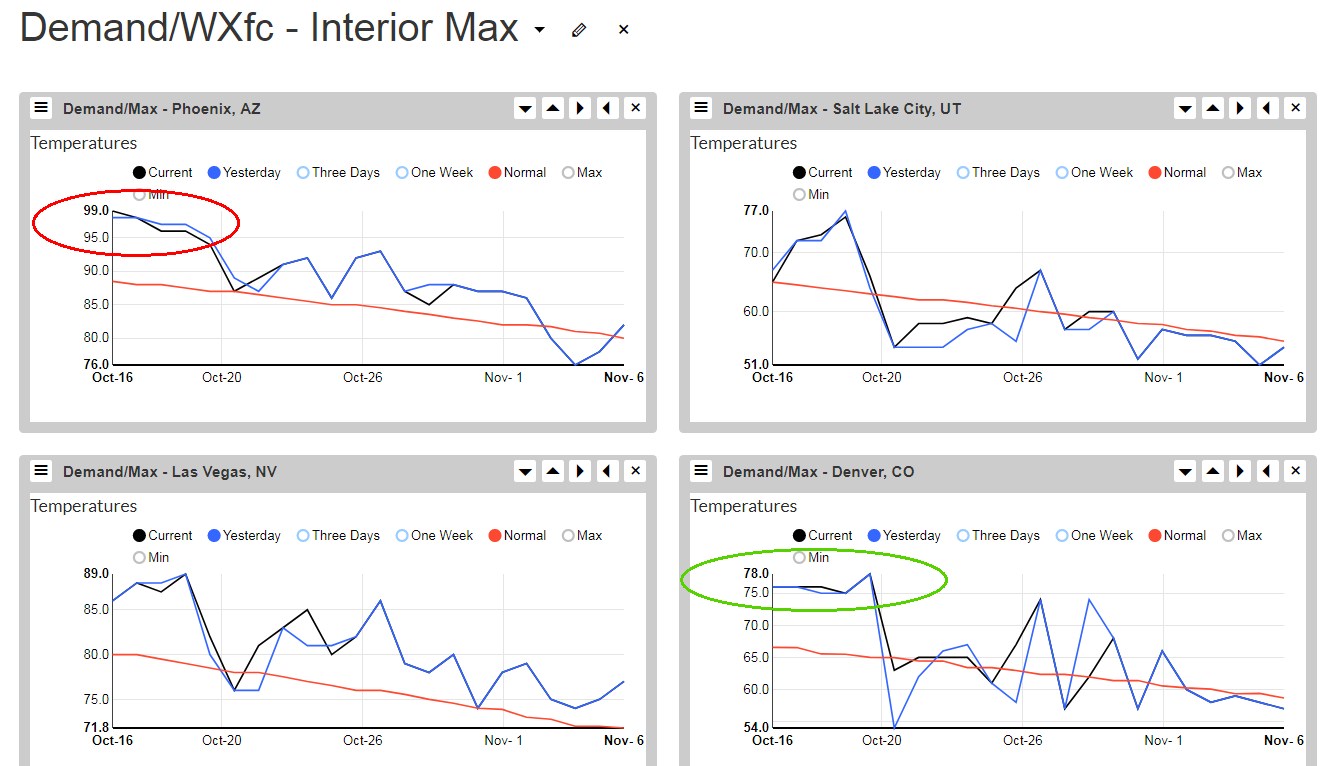 AZ yet bakes again in another forecast; that inferno known as Phoenix is relentlessly hot, and miserable. Another week of positive anomalies will continue to put pressure on the hub, but there is plenty of idle gas capacity, so the upside is capped at relatively low heat rates unless all of it is down for maintenance, which it’s not. 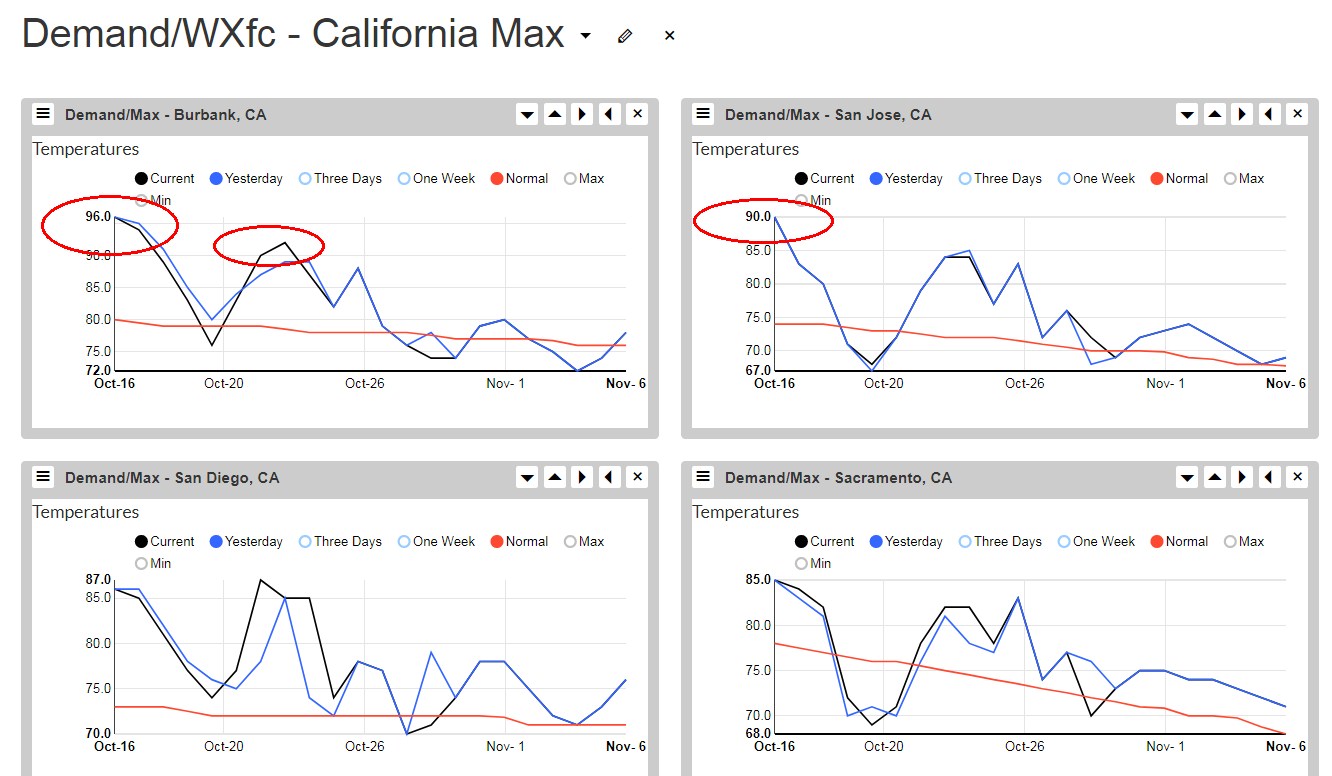 California enters the week very bullish, more so than it did last week, but will cool for a day or two and return to positive anomalies, though not as hot as the early part of this week. With the state amidst its planned maintenance season, the cash markets should remain strong all week. 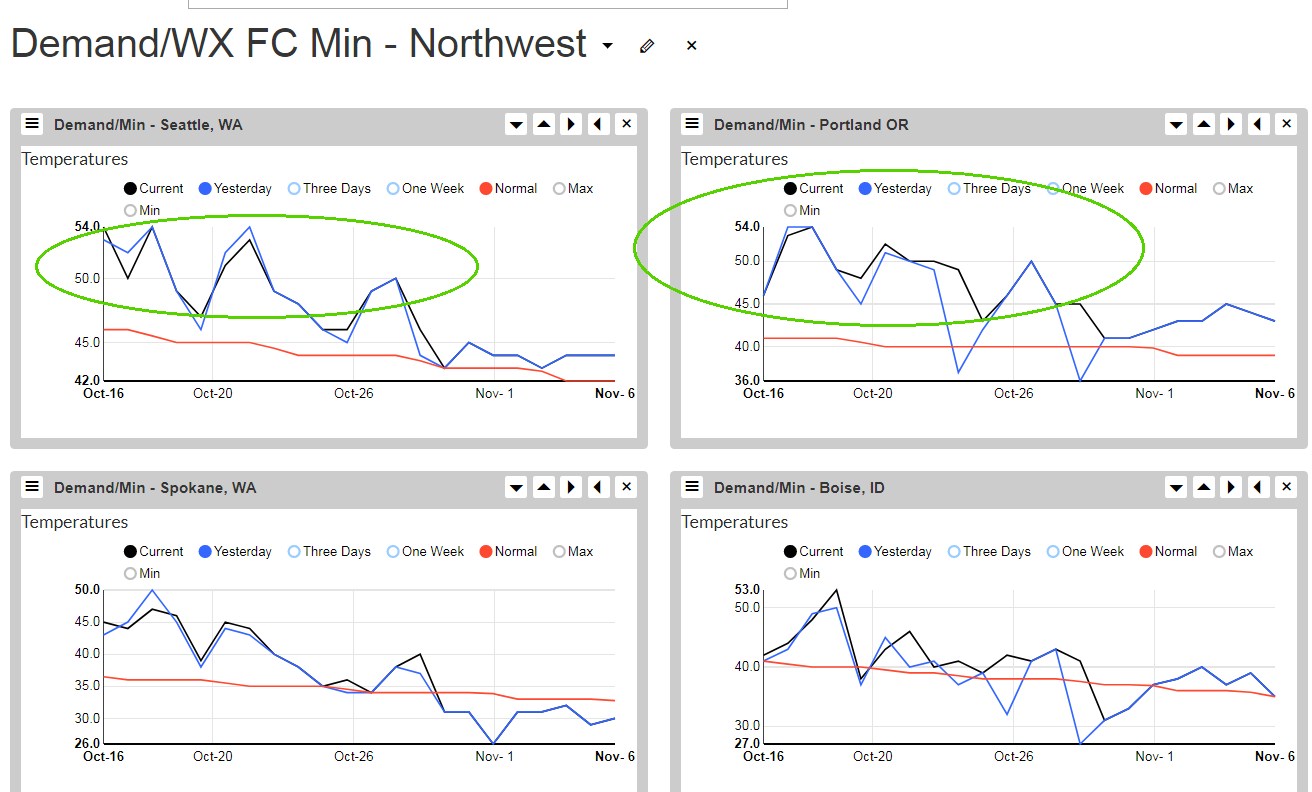 The Northwest isn’t demand-wise bullish, it is bearish, as the region enjoys above average temperatures for the foreseeable future. Those temperatures will put upward pressure on the bom, prompt, and Dec spreads and possibly spill into the near-term Qs. 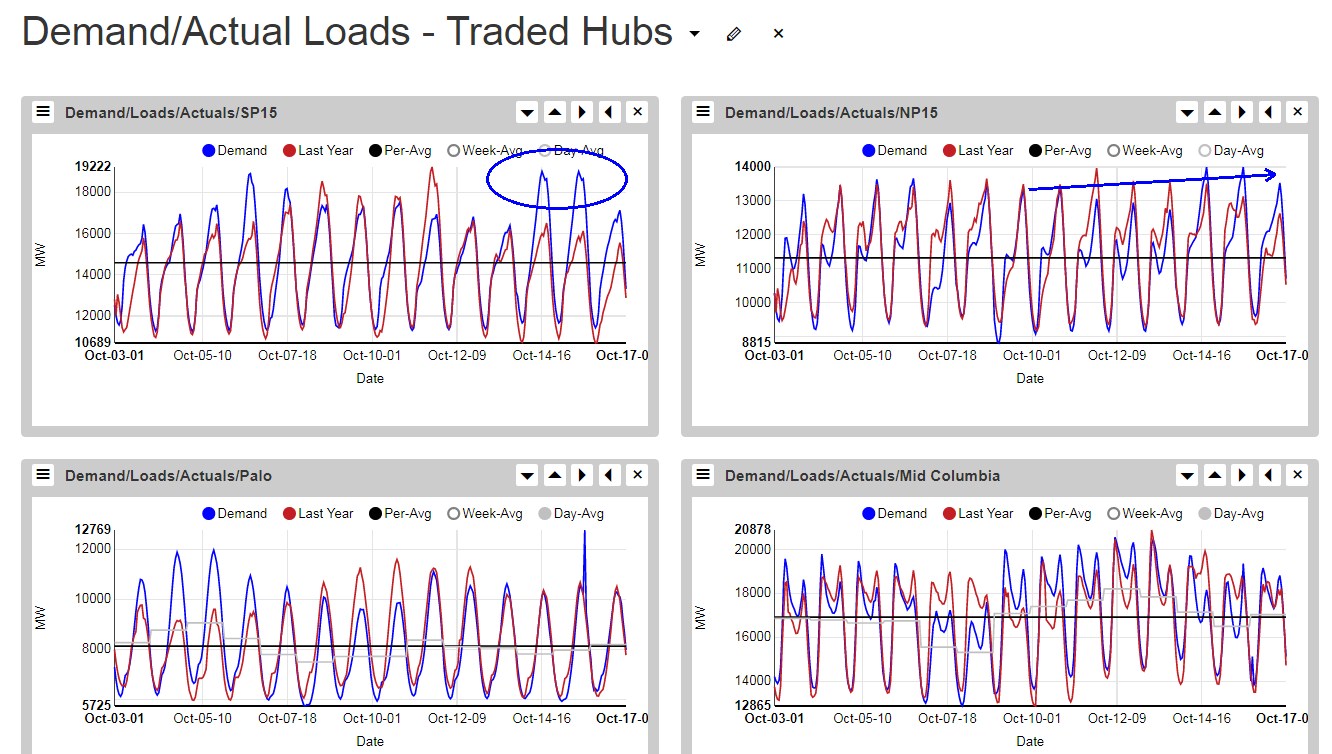 SP realized some big bumps in loads on Friday and Saturday, more so than NP though that hub is up too. Palo is sideways, and the MidC is as well. 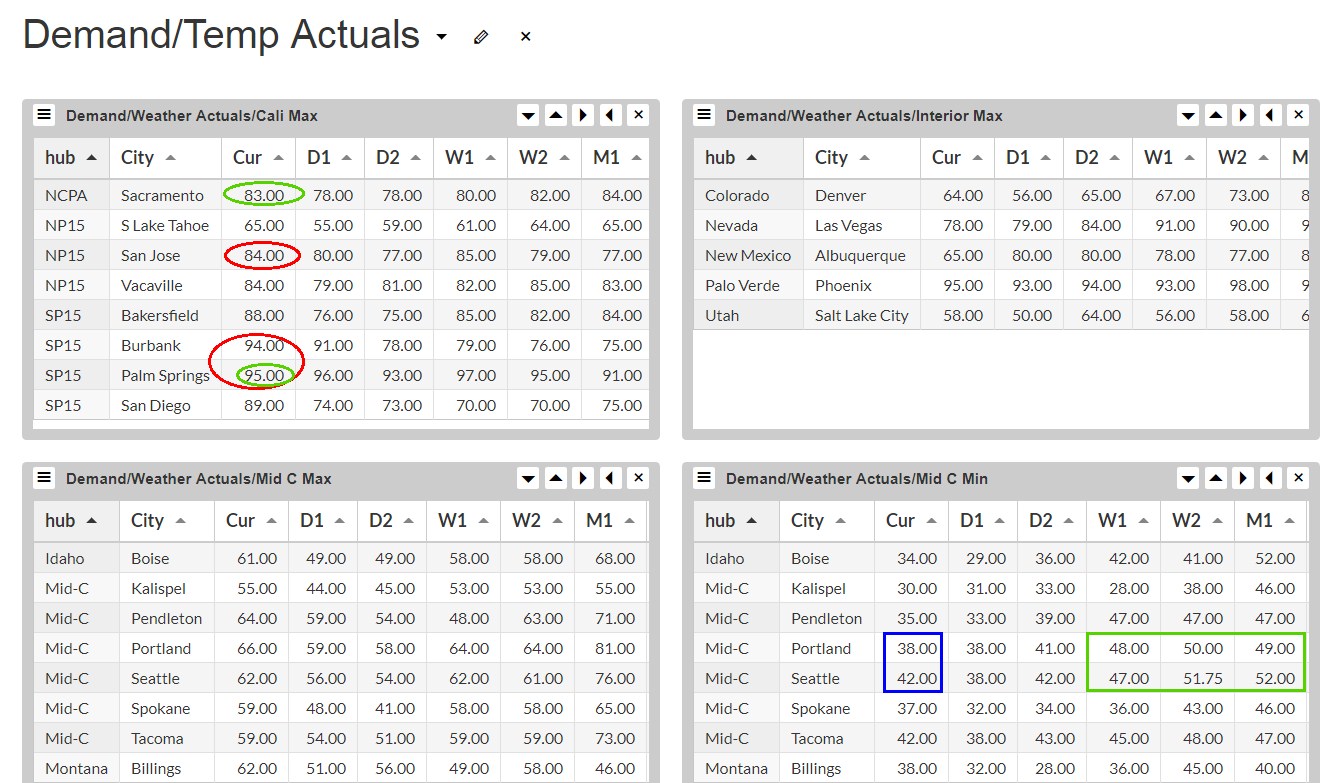 The Northwest’s lows are lower than last week, Portland sported some 30s yesterday, but not cold enough to get things crazy but will continue putting pressure on the On|Off spreads. California was hot, especially interesting was the coastal spreads to the interior. Burbank and Palm Springs had the same temperature; so did San Jose and Sacramento.

Core gas demand in the Northwest is up 20% from a month ago which may explain some of the tightenting of the basis spreads. The rest can be explained by gas noms for power plants: 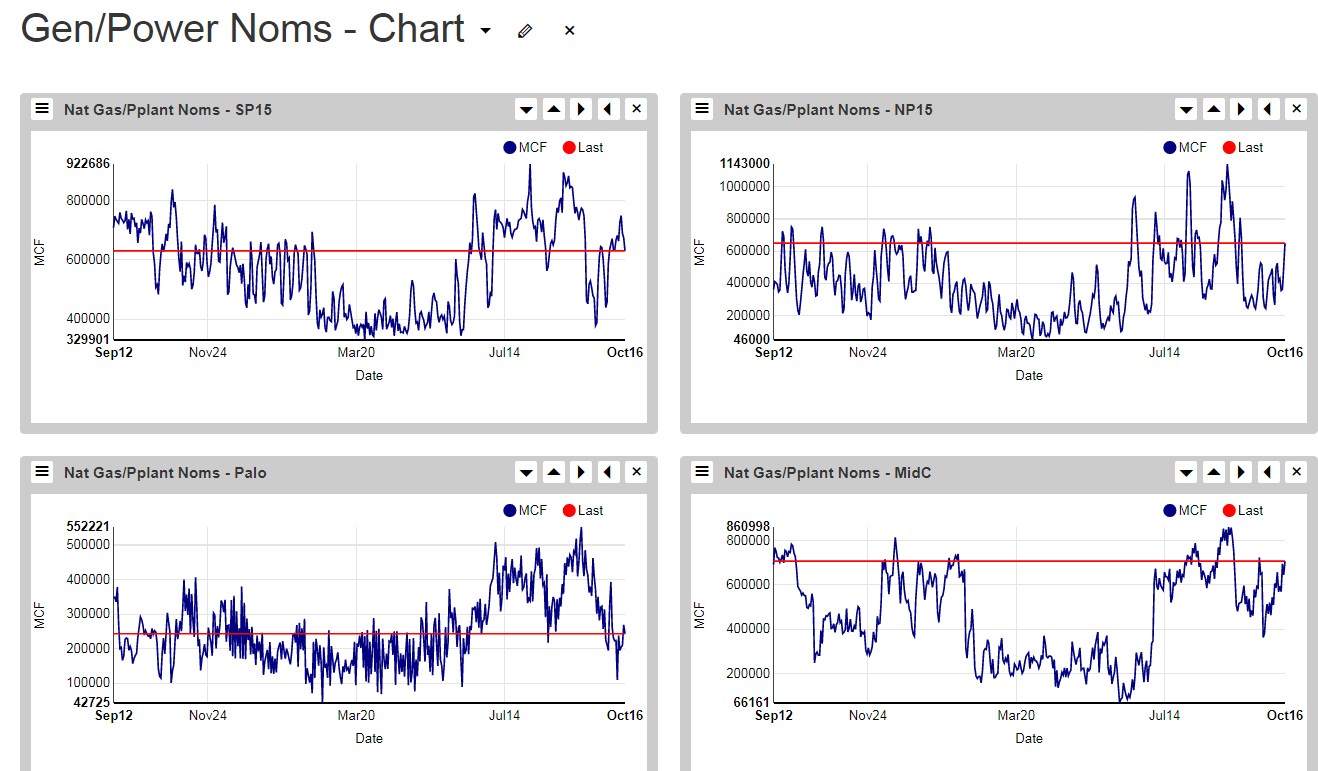 Northwest noms are near summer-highs, and SP’s have rallied hard as well; while NP and Palo have not. That latter hub has little upside unless there are a lot of gas units offline in Palo. We know a nuke is down: 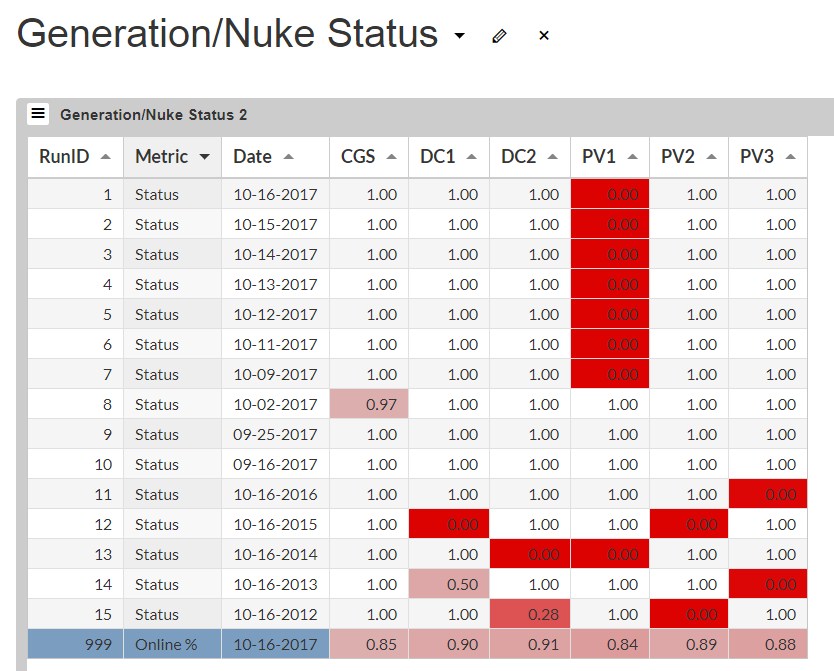 but the three plants inside Palo we do track (Gila, New Harqualah, and Griffith) are running strong: 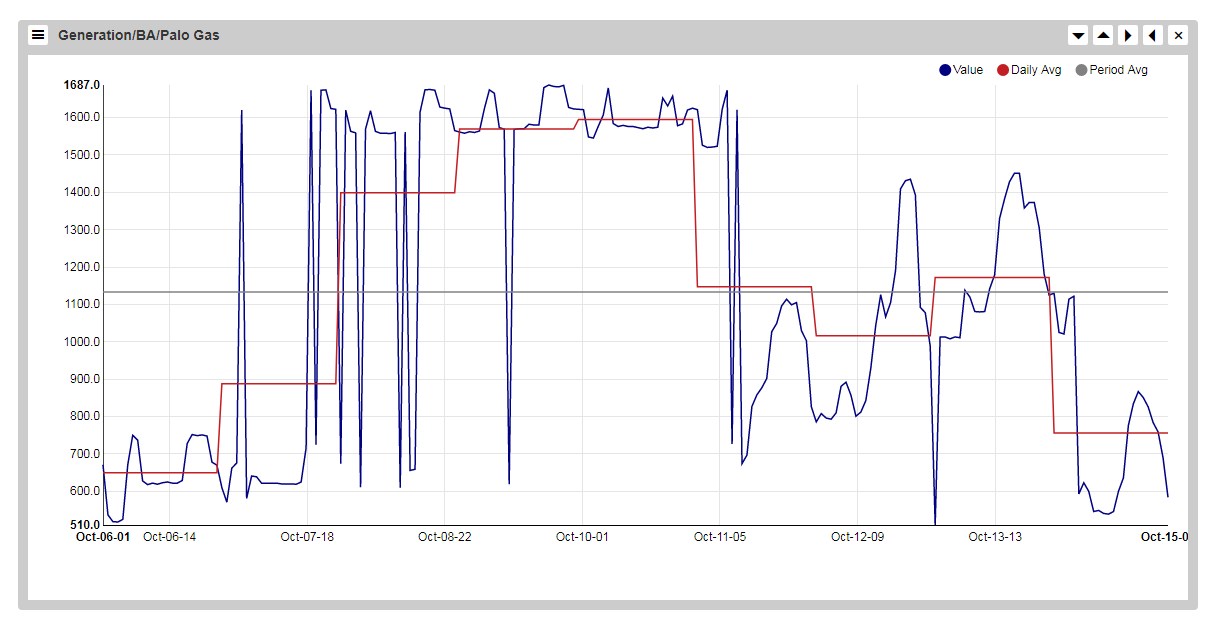 Loads will continue decaying leaving the hub with not much upside. The upside will be at SP, at least in the short run as the ISO units go into maintenance mode: 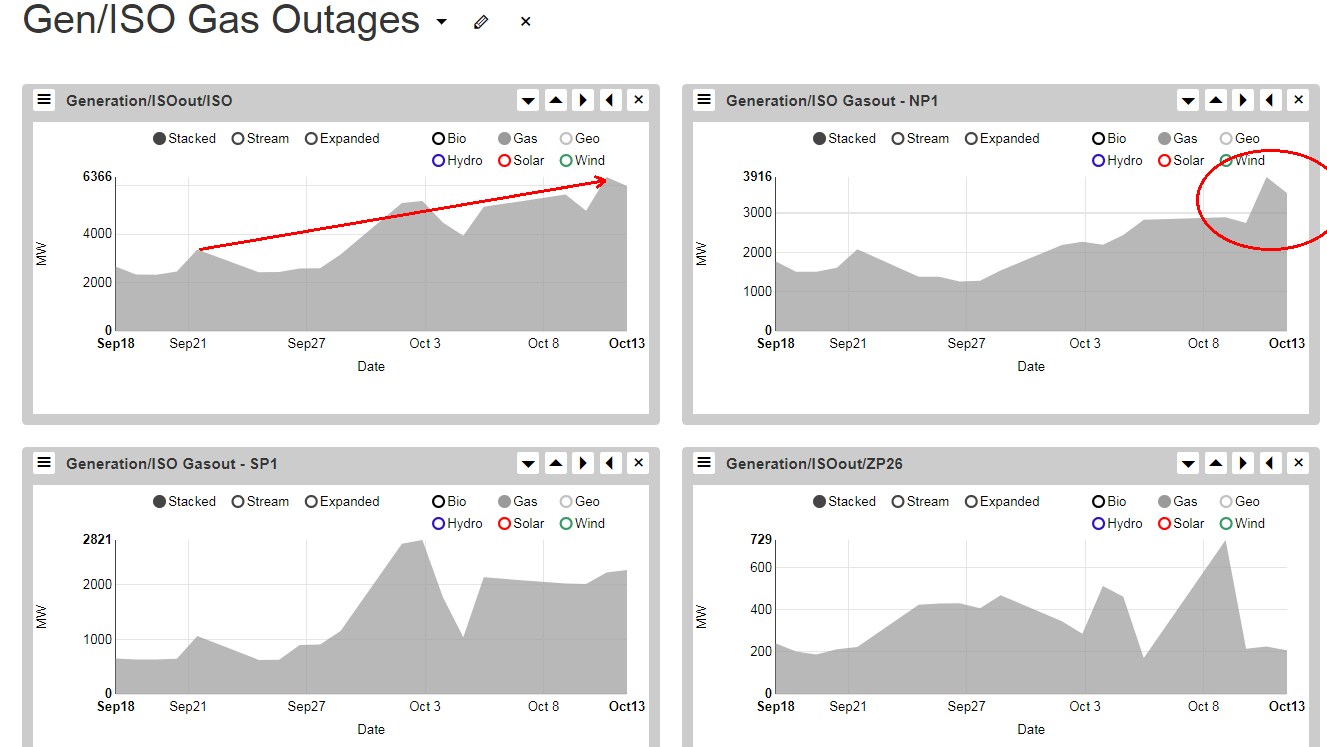 NP has seen a surge in outages which explains most of the ISO outage rally: 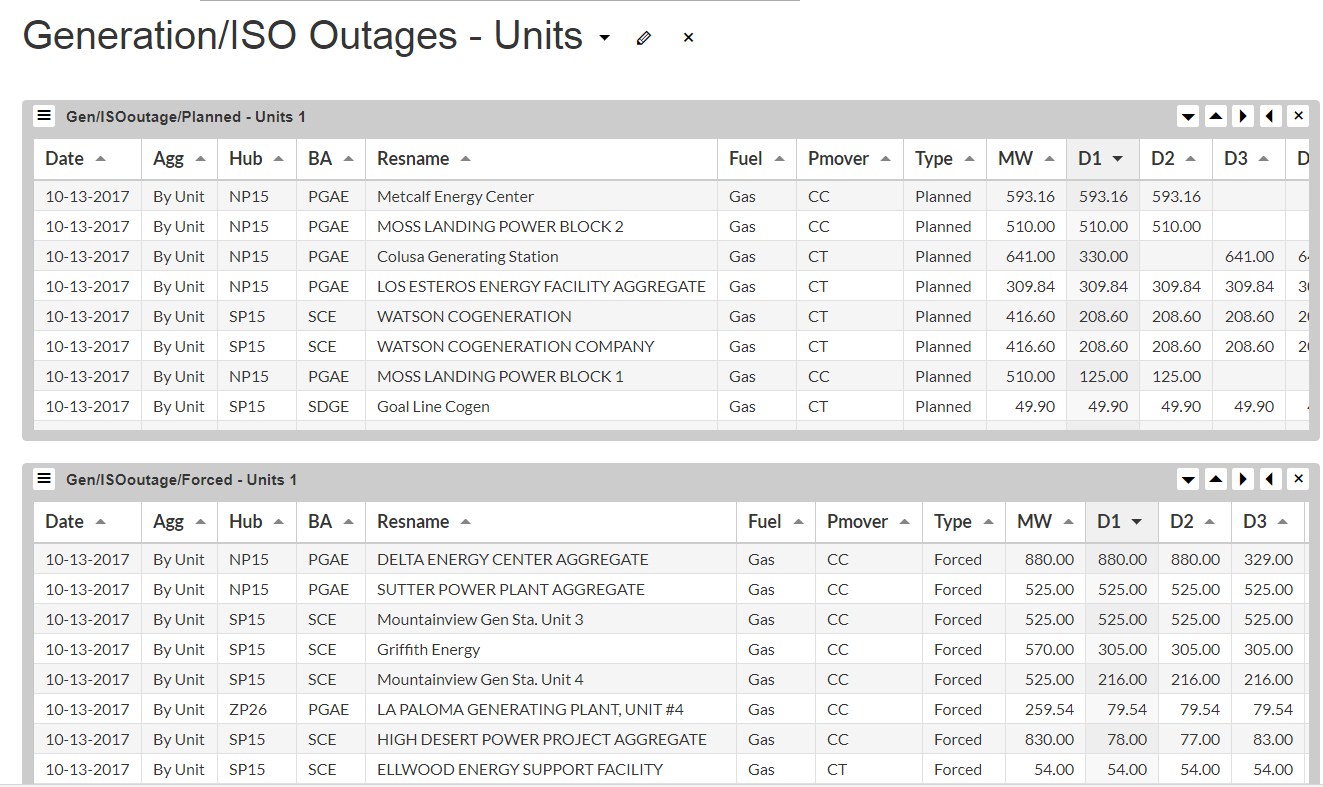 And that surge can be explained by a single plant, Delta Energy Center, which tripped late last week – not planned, forced. There are plenty of planned units, though, and most of those are in NP, not SP.

A free fall, a falling knife, or as a broker we once knew would phrase it “falling like panties on prom night.” Falling so hard the tremendous WY17 anomaly is almost worked out:

Whoa, total ISO hydro energy is only 160 aMW higher yesterday than a year ago and 600-700 aMW higher than the drought years of 14-15. Light load deltas are higher, but the trend is your friend, soon WY17 hangover will be toast. 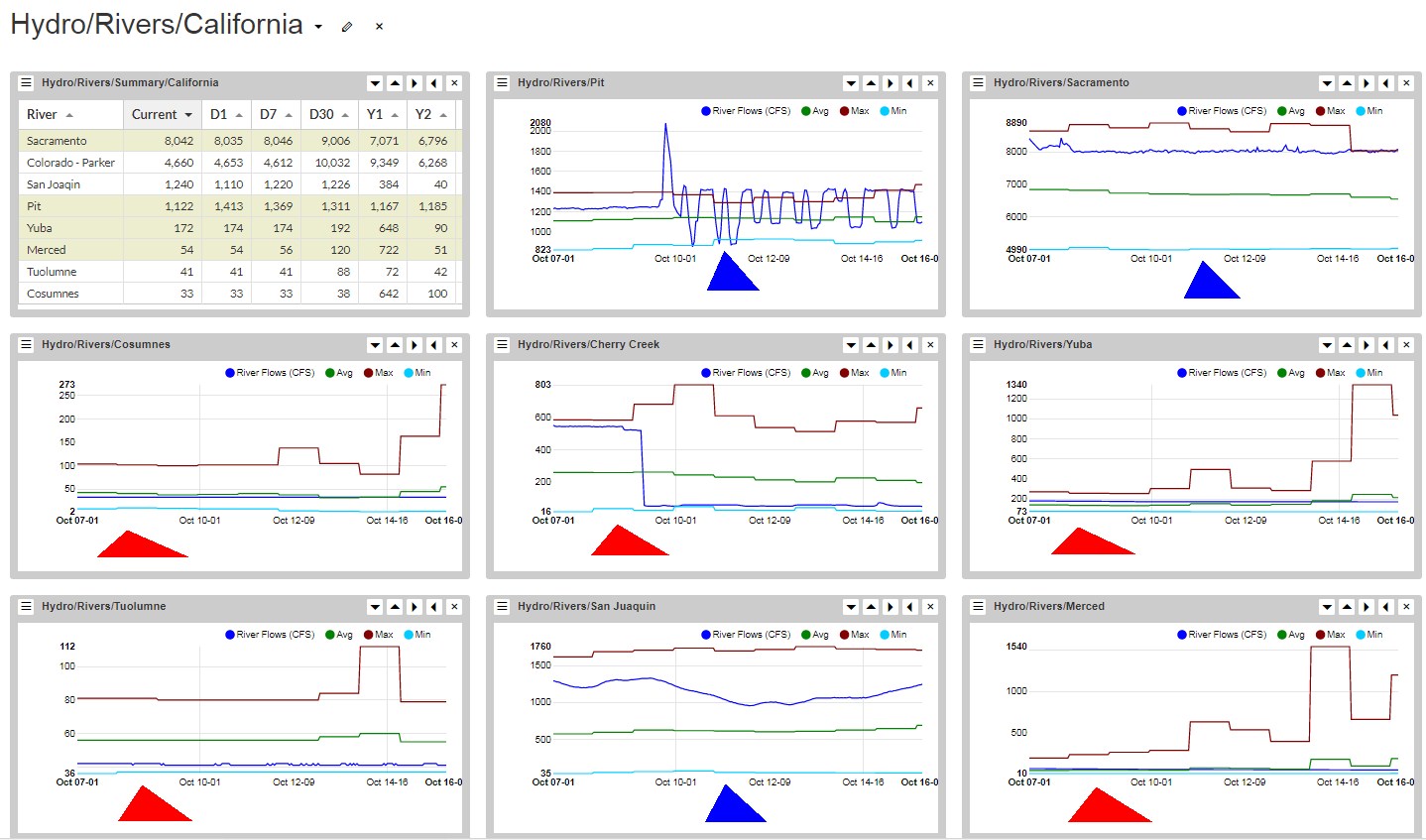 California rivers are getting tight, five of the above stations are now below average; a month ago 7 of 8 were above. 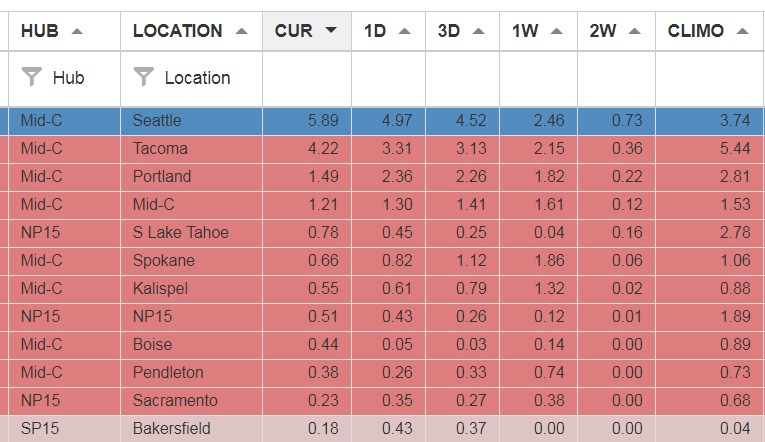 It’s a new water year and now is the time to start looking at Water Supply. Ansergy has re-tooled its entire hydro system, from models to reports. The above is a plot of Ansergy’s Water Supply versus the NWRFC’s. One is volatile, the other not; one is right, the other is not. How the RFC can project that much volatility so early in the water year astounding. And the deltas are not limited to these two major stations: 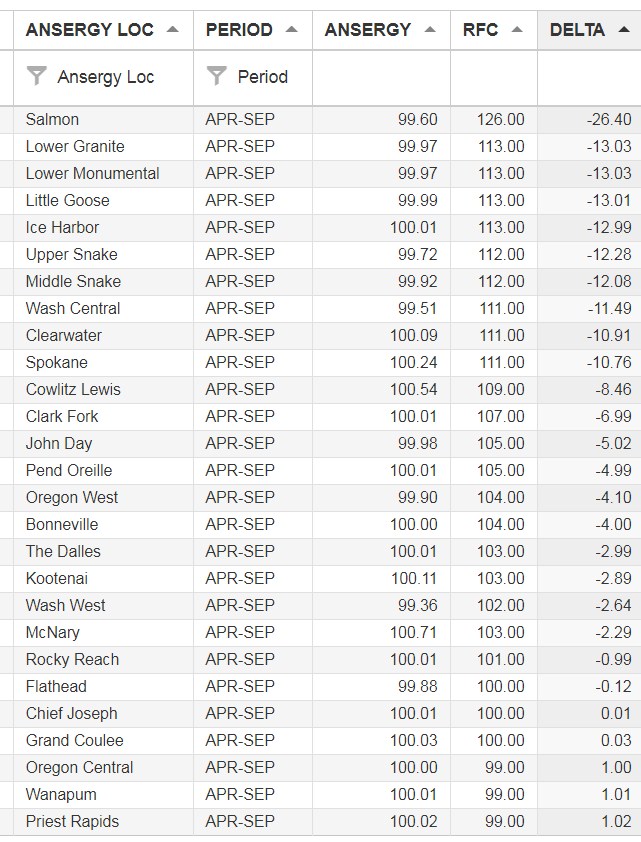 Check out the fed’s bold forecast on the Salmon – an eye-popping 126% of normal and it hasn’t started raining or snowing there, yet. I’d caution about dropping those numbers into your Slice Forecast – you’ll be fake long Q2/3.

The above table is a new dashboard driven off of a new report we added – COE Energy.  Arguably one of the best government websites is the NW Army Corps of Engineers hydro site. We’ve long since used the data, now we do a full scrape, every hour, of every station and metric. The above is compiled from the reported energy numbers, but with a twist. The Feds, at the insistence of BPA, only report energy on a week delayed basis. Dang, huh? Nah, it’s easy to extrapolate the energy if you have gen outflows. Our COE energy reports include the energy through last hour. This can be a useful table for summarizing what is happening in Northwest hydro energy, way better than BPA’s hydro as it includes all of the mainstem Columbia projects that aren’t under the fed domain. 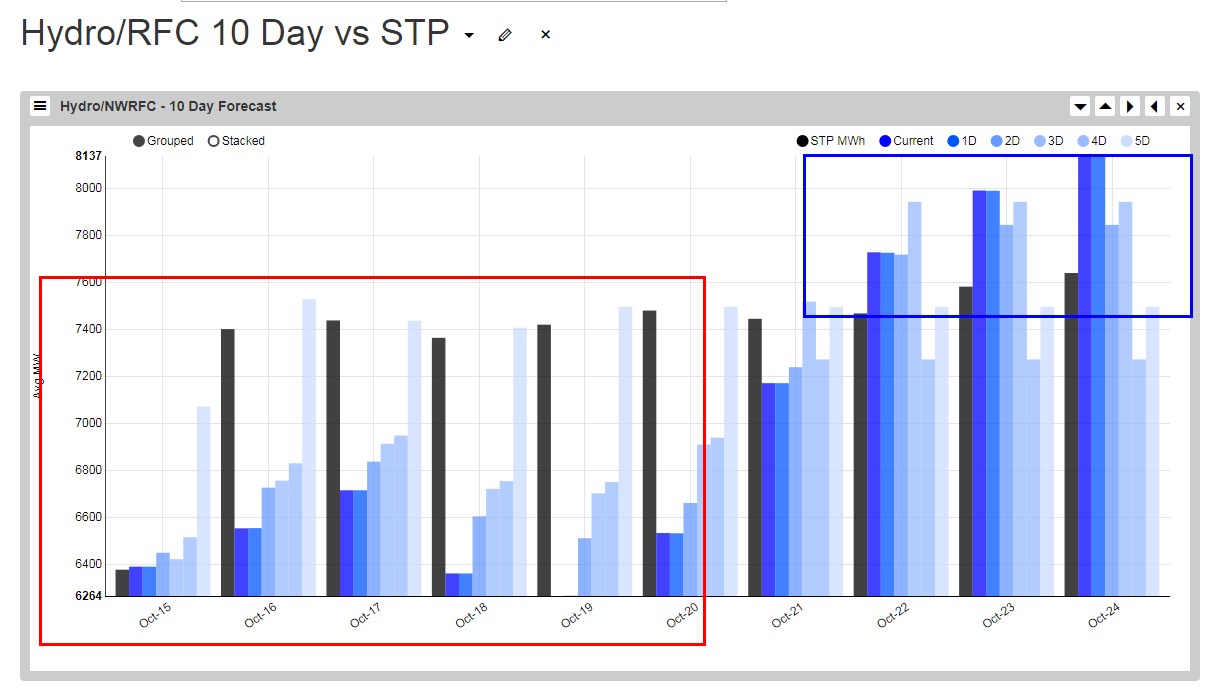 Another fed agency we love is the NWRFC, in the above we compare their two forecast products: the 120-day (STP) vs. the 10 Day. Note the massive haircuts in the last few forecasts versus its STP. What taketh must giveth, we guesseth, as the back end of the 10-day has seen production jacked. All of which provides not very telling tells for today’s STP.

Coulee continues to draft, dropping three feet in a week.

Final hydro comment – BC’s reservoirs are now at, or slightly below, normal, and the Northwest’s are below. California remains long and strong, storage-wise.

The DC is down, at least for a month. Interesting that the AC didn’t touch TTC once during the initial down hours. Flows out of ZP are all heading towards SP and flows from Palo to SP are still falling.

The ISO has a significant derate on Malin500, and the El Dorado line is offline.

Lots of fun fundy data points to chew on. In a subsequent post, we’ll gnaw on those and draw some conclusions.