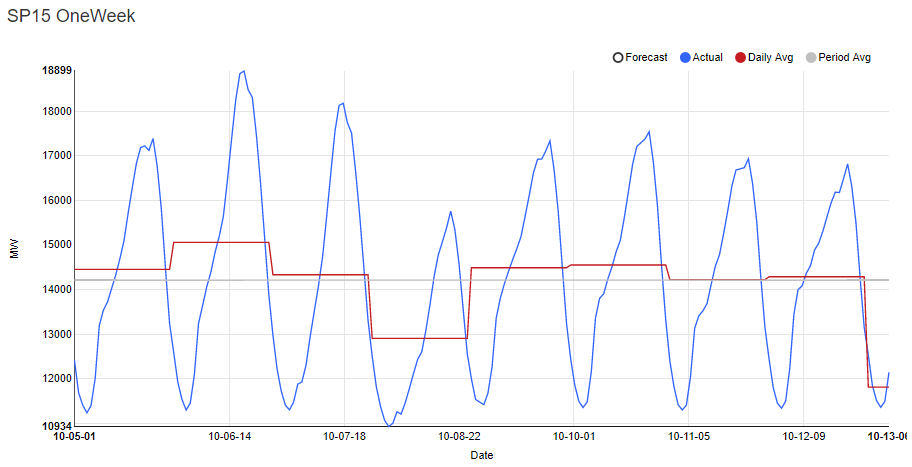 SP-15 remained relatively flat day-on-day with a drop of just 120 MW.  The daily average has varied by only 260 MW across the previous four days. 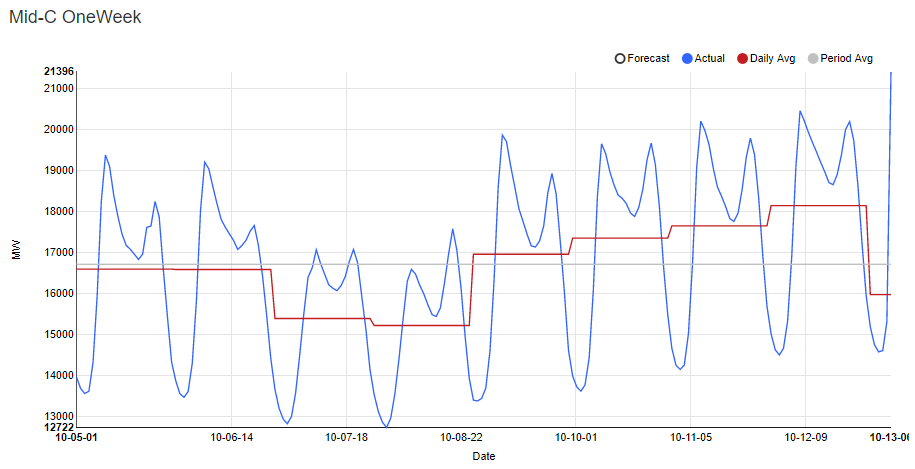 Different story in Mid-C as yesterday marked the fourth consecutive day of demand growth, finishing with a daily average of 18,134 MW, nearly 500 MW higher than Wednesday and 1,600 MW higher than one week prior.  The increase in daily average was aided in part by heavy increases to light load hours as more than 1,120 MW was added since Monday.

NP-15 peak loads fell just over 100 MW day-on-day, but have decreased close to 500 MW since Wednesday.  Average daily loads have fallen roughly 300 MW in the same span of time, while week-on-week demand has dropped 350 MW.

Mid-C continues to pace colder than normal as all six stations show up in the red, particularly Boise with its sub-five degrees below normal 10-day forecast.  SP-15 is mostly warmer than average as Burbank and San Diego each show a 3+ degree anomaly.

The 16th jumped five degrees over yesterday’s forecast, bringing San Jose to 89 degrees for a second consecutive day.  The entire forecast from today through the 18th saw a moderate increase in daily highs.

Sacramento’s forecast calls for cooler weather than San Jose as the next warm-up calls for a high of just 85.  Despite being lower than San Jose, the forecast is considerably cooler than what was predicted yesterday, particularly on the backend as the 17th comes in seven degrees warmer.

Burbank has a shot at new 10-year highs on the 14th and 15th before shooting up to near mid-90s by the 16th, equating to temps 13-degrees above normal.  The cooldown expected soon after could see highs drop back below normal, ultimately leading to a high of just 73 by the 20th.

Sharp changes to Phoenix’s forecast as well where the 16th and 17th saw a few degrees added to their daily highs, now approaching triple digits, while the 20th and 21st lost as much as four degrees compared to yesterday.  If the cooldown holds true, it would mark the first below-normal high in some time.

Seattle will reach just 54 today, seven degrees below normal, but highs should begin a slow climb back above average before culminating in a high of 64 by the start of next week.  The brief flirt with moderate temps should be followed by another drop, this time falling all the way to 53 by the 20th, six degrees below normal.

While Spokane’s average temperature should come up short of normal over the next 10 days, the minimum temperature is trending above average over the same span of time.  Lows should finish in the low 30s today before settling at 45 by the 18th, 9 degrees above normal, and four degrees warmer than forecasted yesterday.

Boise showed the coolest temperature anomaly for its 10-day forecast, and one look at the minimum temp chart should explain why.  Lows will plummet to just 27 degrees tonight, 15 degrees below normal, and nine degrees below the previous 10-year low for today’s date.

Denver will just touch a new 10-year record low by the 14th with a low of 31, six degrees below normal.  Lows will make a steady climb thereafter, eventually leading to a floor of 47 by the 19th, 12 degrees above normal.

The 10-Day forecast will bottom out at 5,990 MW over the weekend before making a steady climb toward 7,278 by the end of the forecast.  STP is projected to stay well ahead of the 10-Day through each of the forecasted days, particularly so on the back end where the gap climbs to as much as 650 MW.

Total ISO gas outages increased roughly 1,400 MW overnight from Wednesday to Thursday, bringing the total to 6,366 MW, and finishing well ahead of the stagnant Hydro at 4,616 MW.  Geo saw its outages more than double over the past week, bringing its total to 544 MW, while Wind and Bio each saw a reduction to outages overnight.

PV1 remains offline.  We’ll keep this monitored and remind readers when it returns. 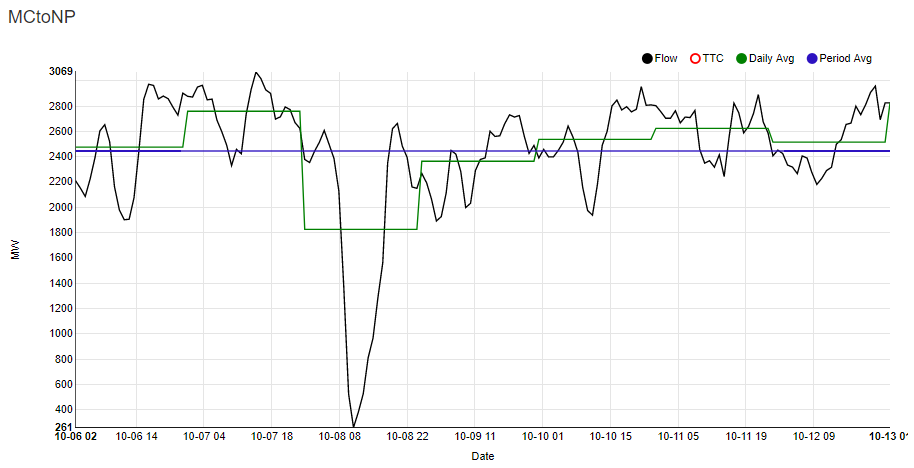 MC-NP average daily flows fell just over 100 MW, but remain mostly unchanged for the week despite peak flows reaching 2,958 MW in the late hours yesterday, the highest hourly flow in nearly a week. 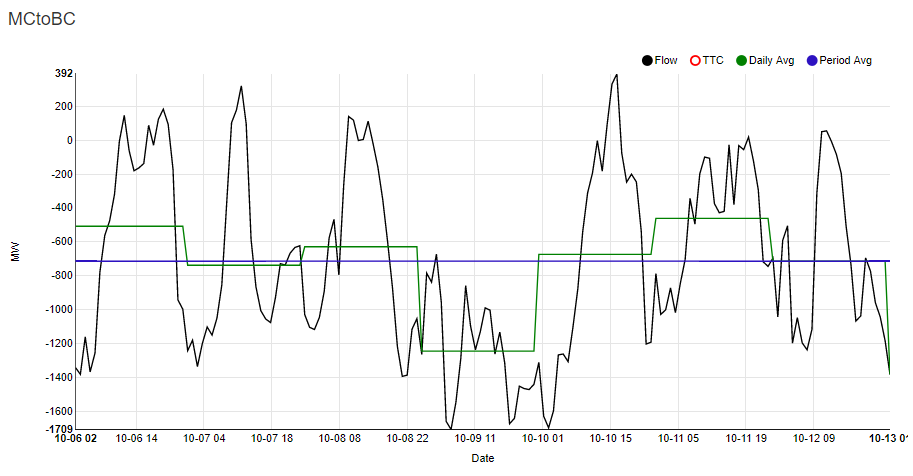 Average daily MC-BC flow fell 230 MW day-on-day despite hourly flows reaching positive territory with a peak of 51 MW.  This occurred in part thanks to late-hours flow south, reaching toward -1,100 MW as midnight approached.