Let’s take a look at what’s happening in the WECC fundies before we launch into our Front-end tirade. Always a good idea to get a pulse; see if the heart is still beating before running that marathon. In the case of the WECC, it is barely beating.

Well, that’s not entirely true, check out PV’s spot markets besting both ISO hubs. Now that one came from left field, huh? Ironic, because you’d never guess the hub would trade premium to anywhere, given where noms are at: 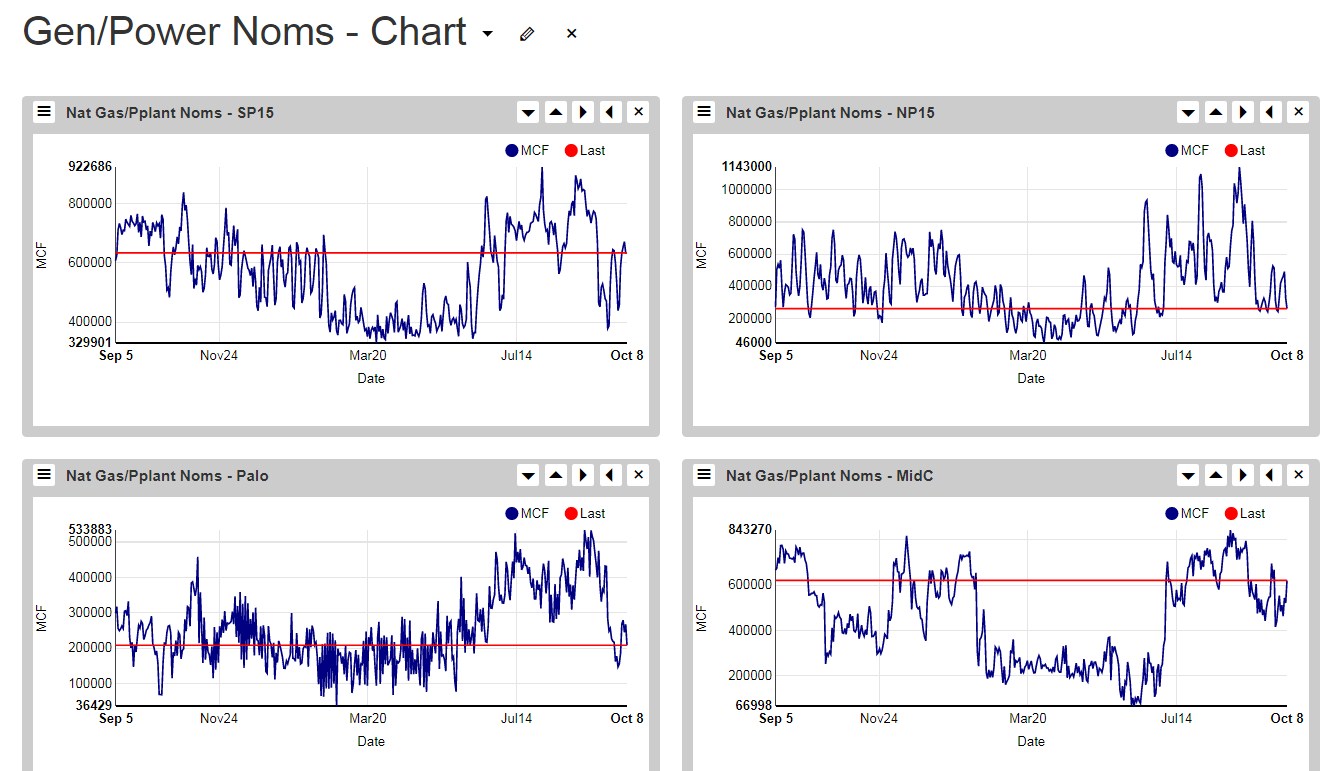 Those, at Palo, have fallen off the proverbial cliff but the price remained strongly bullish – a paradigm shift? Ooh, scary. Oooh, wrong, just anomalous noise that will soon reverse itself as the desert finally cools off and the ISO ramps into its planned outage season. 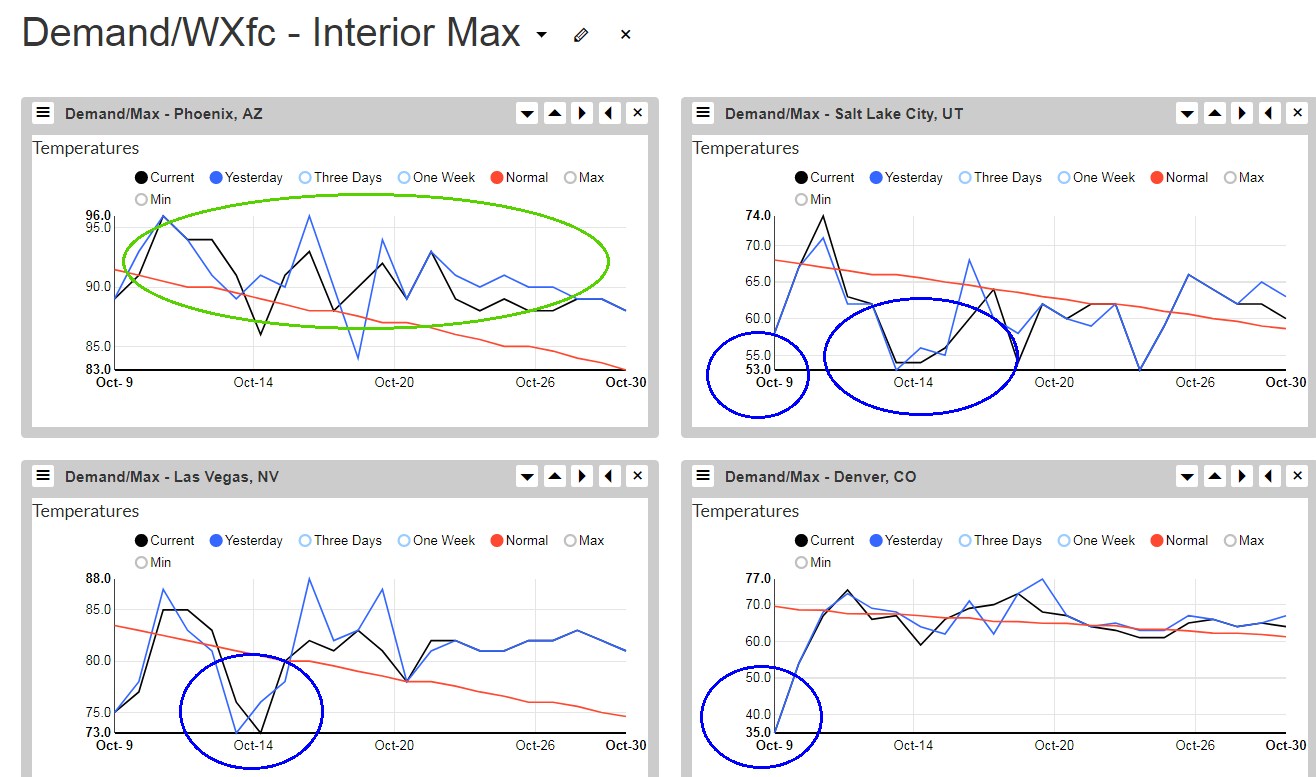 Though, always a though, Phoenix remains above normal throughout this 21-day outlook, the max temps never approach 100 degrees. Meanwhile, in the rest of the Interior, there are signs of heating load, albeit for just a few days. We doubt we’ll see those $12.00 On|Offs trade at that level much longer. 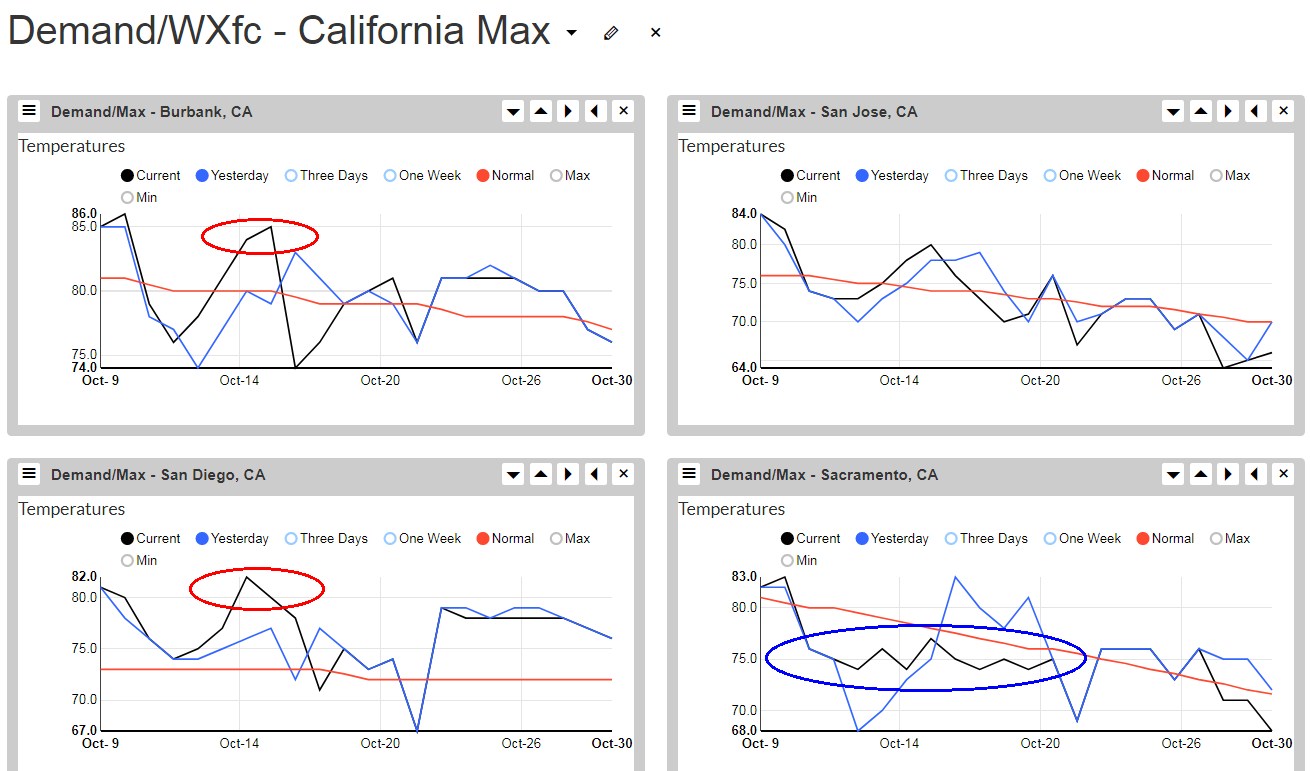 California sees neither heating nor cooling load, just base load. Surprising is San Diego which gets almost as hot as LA. Now we’re seeing the Northern portion of the state undergo a rapid cooling setting up more load decay up north, at least faster than down south. Most of SP days are above average, most of NP days are below. 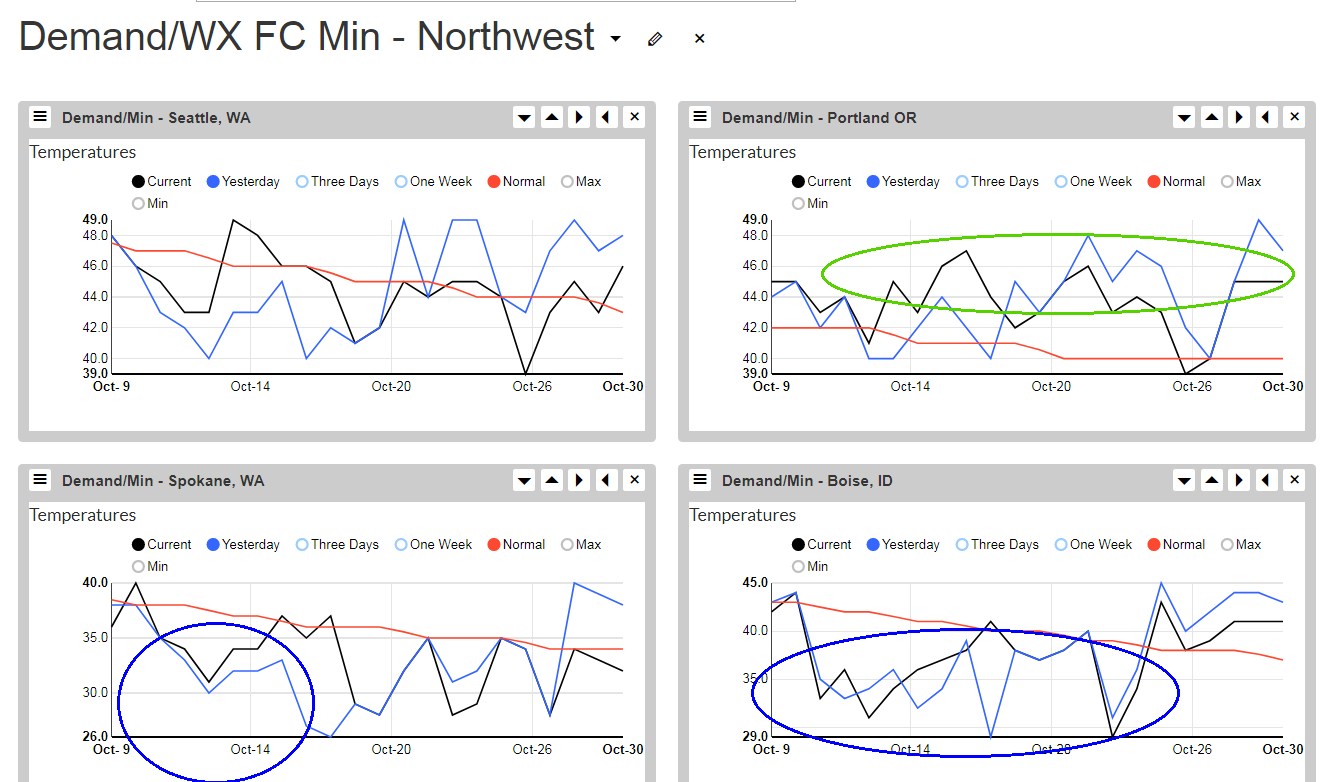 Back to posting Mins for the PNW because those will drive more load than Max. Portland enjoys most of its 21-day forecast above average while the NW interior is below normal. Nothing too cold, but should see some tightening in the morning ramps given a still (kind of) tight water outlook. 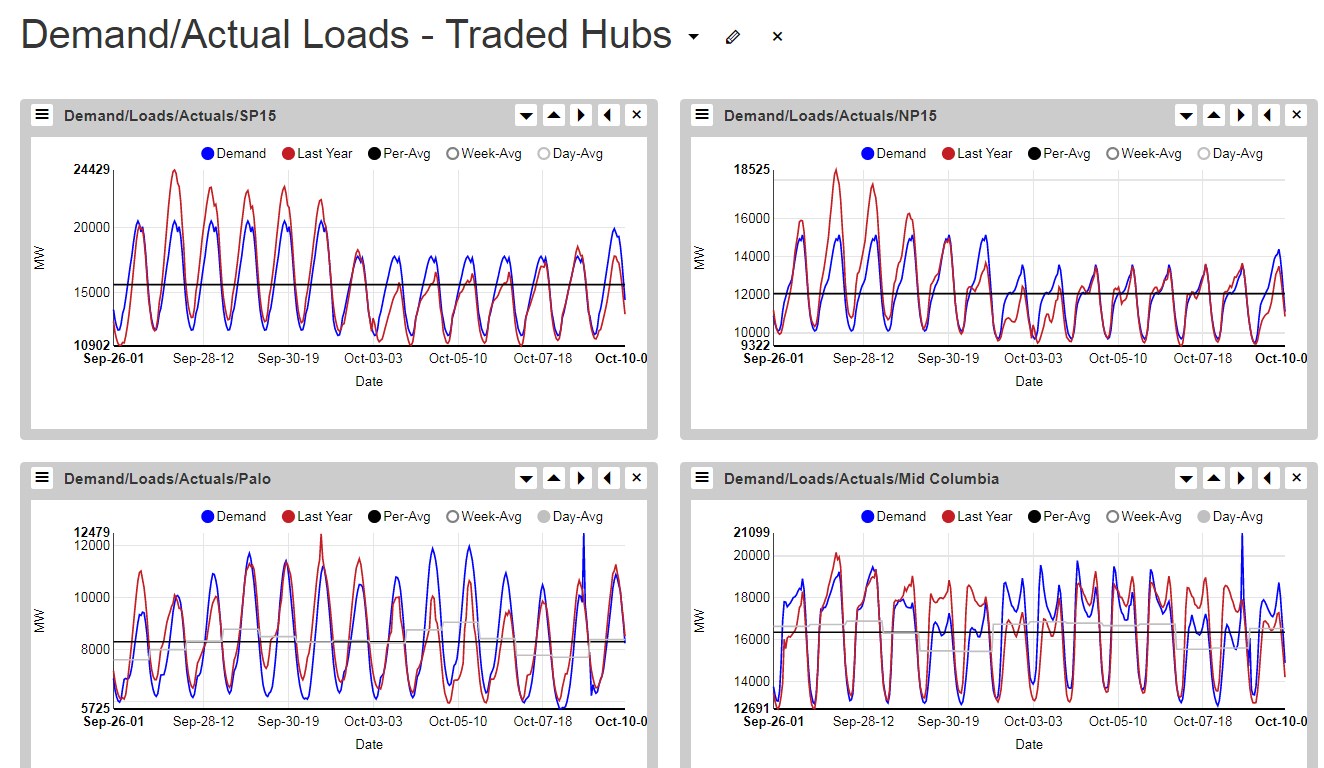 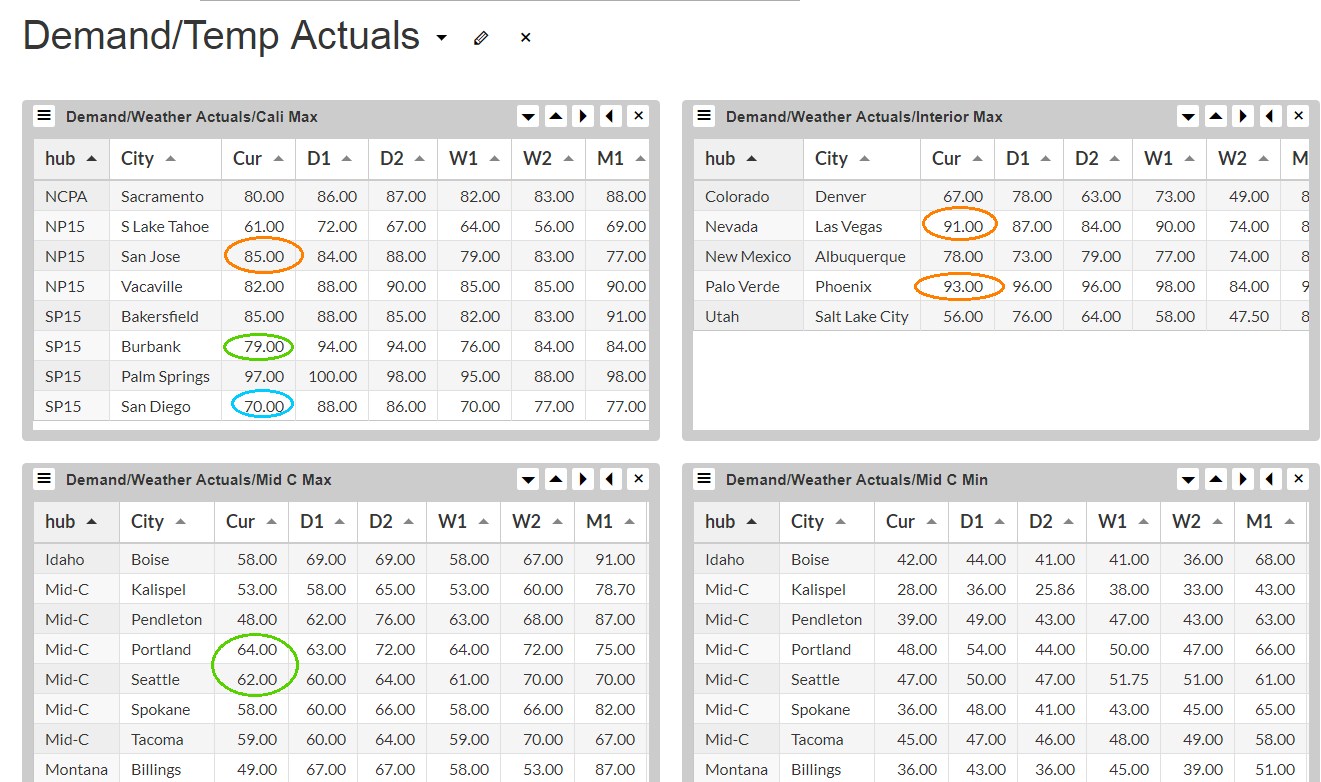 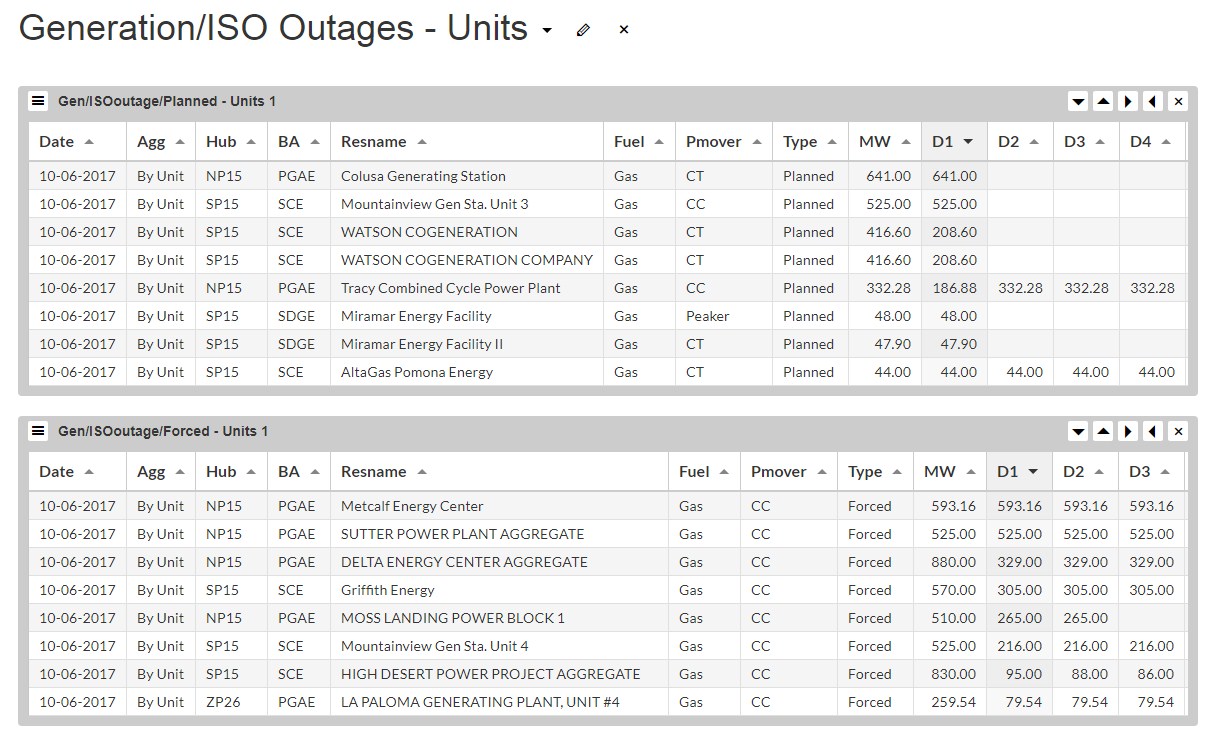 The above is a new dashboard which splits the units offline by type: planned on top, forced beneath. The season to be offline is here, expect more of those over the weeks to come with peak Fall planned outages around the second week of Nov. 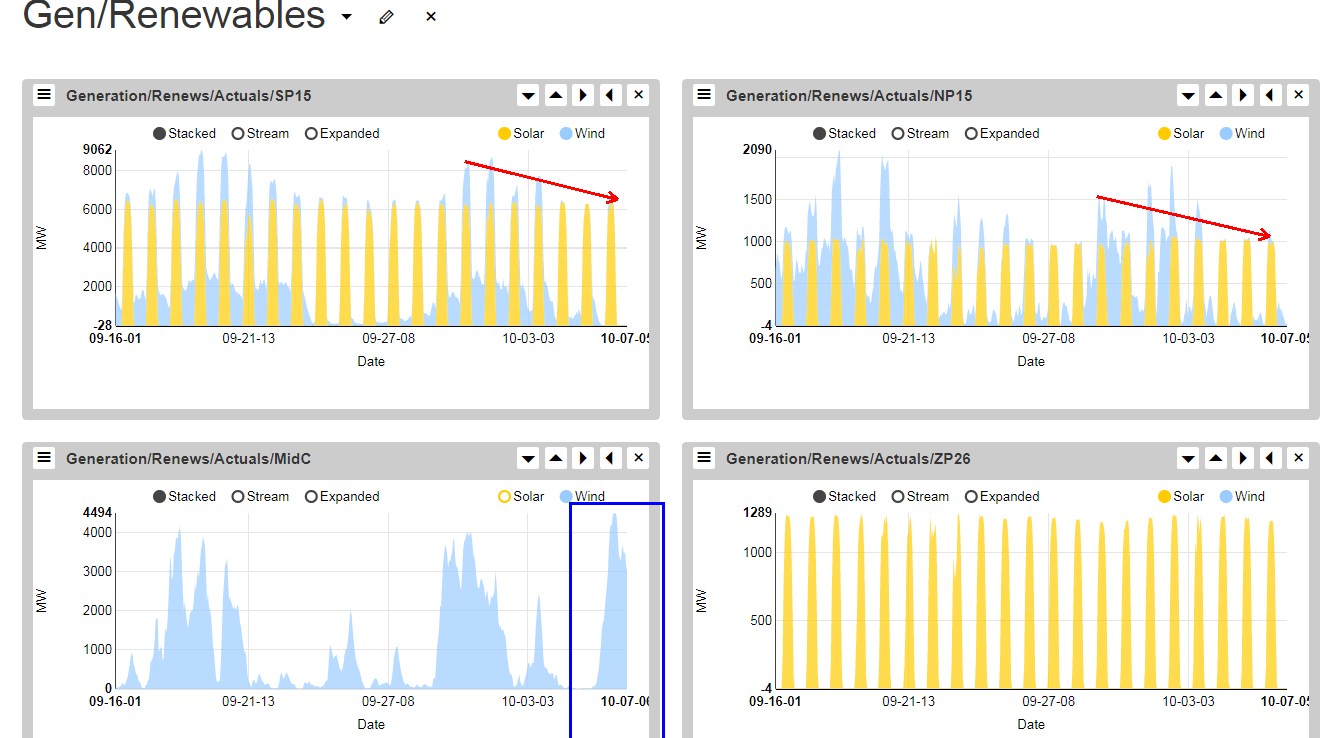 While the wind quit blowing in the ISO, it ramped back up in the PNW. 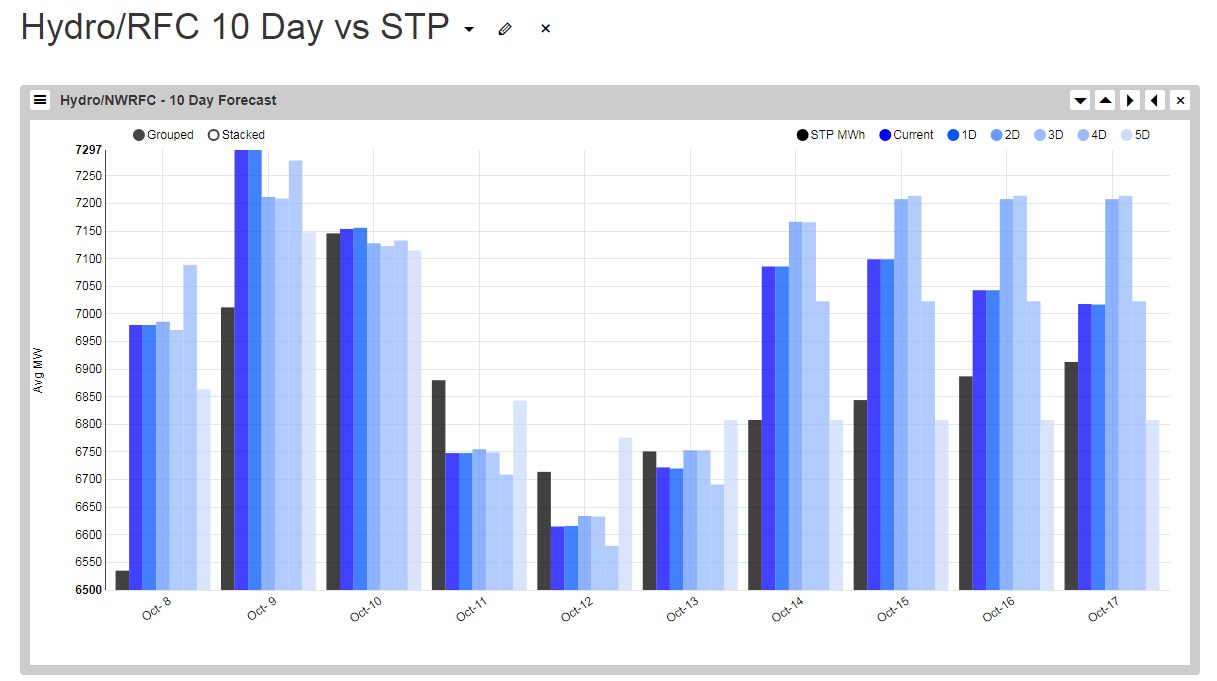 The NWRFC is growing ever more bearish on the Mid-C; its 10-day outlook now surpasses last week’s STP every day, and by a material amount. All of which portends for a bearish STP later today. Just what the hub needs as it is about to lose 3000 MW of exports to LA with the NOB going down for its Fall maintenance next weekend.

The rains are coming to the Northwest, too. Nothing epic, for most stations the 10-day cumulation is less than average, but it’s not zero, either. Even California toys with some rain:

But that fair state barely registers, just a random day here and there and doesn’t come close to normals. We’ll be watching the Golden State’s precip closely after last year’s endless deluges. It’s still early, but the weather is pattern-driven, and the state has been in a dry slump of late.

Total hydro production continues to crater inside the ISO, every week there is less yet there is still a 1000-2000 MW versus 2013-15. Composite reservoir levels are at five-year highs suggesting we’re months away before the overhang is worked off.

Coulee’s production has been sliding all the while the reservoir has been drafting, yet the RFC is projecting a surge; not sure where that comes from, especially given the DC going to zero. We’d expect just the opposite, a slight tightening to absorb the export loss.

Interesting that neither the NOB or COB hit TTC yesterday despite robust NW winds. Palo continues to cut its exports into SP, and the “Paths” are seeing decays in flows as the ISO becomes long everywhere. Also, note the DC went to zero for a few hours yesterday and the AC approached that level.

Finally, to state the obvious, the NOB is going down this weekend. BPA is a master at managing its system, and we expect most of this to be absorbed by cutting gas-fired generation and BC Hydro backing off on its exports to MidC. In other words,  heat rates will still clear with gas on the margin. 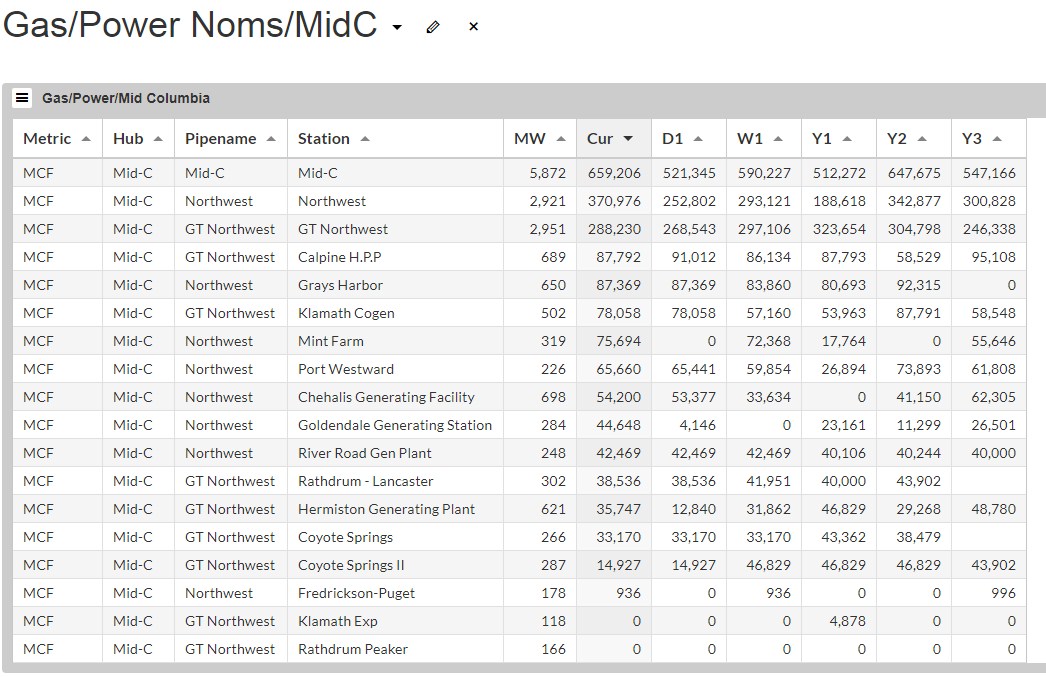 There remain plenty of units to shut down; we’d expect most of the 3000 MWs to come out of the above. Despite the DC loss, the Ansergy Iflection Index remains positive throughout the outage:

Nothing is bullish, except for the below average precip in California and the beginning of the planned maintenance.  Not that is all that bearish, either, but the trend is for the WECC to get longer for the next ten days.

Our take on the front-end markets will follow shortly.