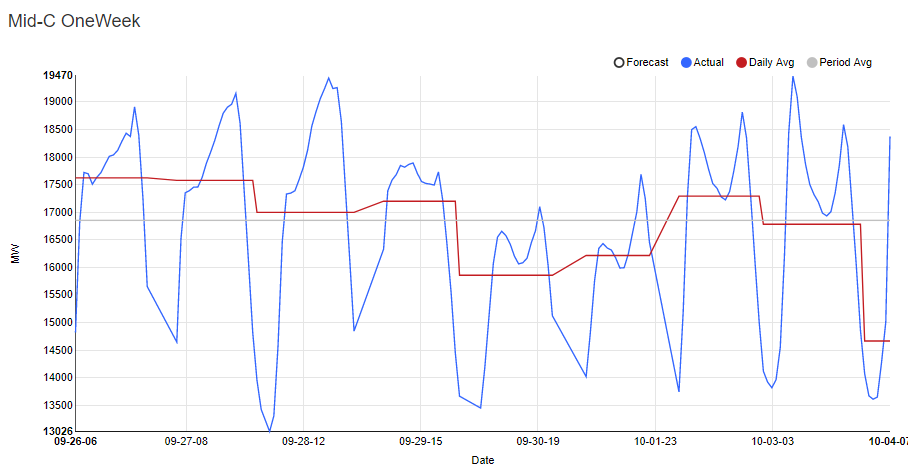 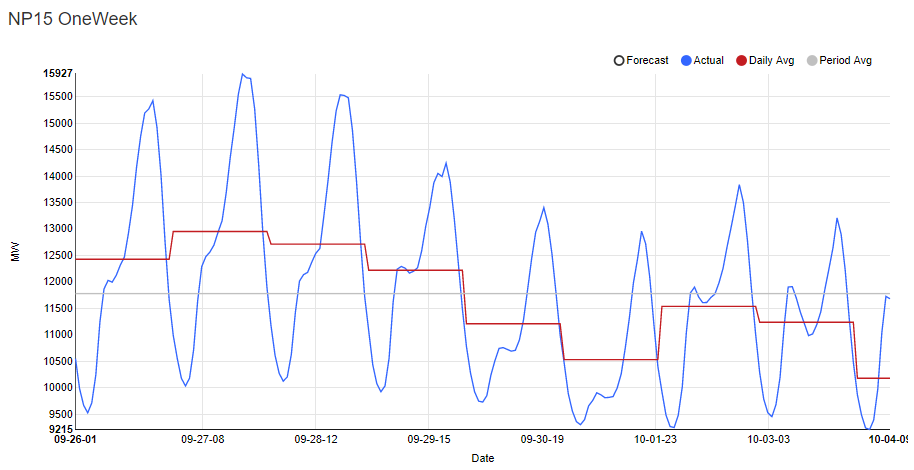 With a lack of significantly cooler weather on the horizon for most of the West, our attention focuses on NP-15 with anomalies pushing north of four degrees above normal for most stations.  SP also gets a warm up, particularly with Burbank’s 5+ degree anomaly.

San Jose is set to increase six degrees over the next two days, ultimately equating to a high of 87 by Friday, ten degrees above normal, and potentially a new 10-year high.  Warm temps should persist until the third week of the month where highs fall below normal for the first time in October.

Sacramento will start off below normal today but will eventually climb to a high of 90 for both the 7th and 8th, nine degrees above normal for each day and one degree warmer than forecasted yesterday.  The 10th could potentially be the next day to drop below normal with a high of 79, though just one degree from average.

Burbank can set new 10-year highs based on today’s forecast (and thanks to an additional three-degree bump from yesterday’s forecast) on the 6th and 7th.  With highs predicted to reach 95 for each day, we could see temps 14 degrees above normal.

Yesterday’s call for triple digits on the 6th was downgraded to a high of 99, but still seven degrees above normal.  Average daily highs are set to fall nine degrees by the third week of the month, but daily highs should stay well north of that line for most of October.

While the Southwest hangs on to its summer-like temps, the Northwest is more of a mixed-bag.  Seattle shows highs in the mid-60’s for the rest of the week before dropping eight degrees by the weekend with a high of just 60 on Saturday.  The rest of the month shows highs closely hugging the average line.

Close to the same story for Portland, though temps will sit in the comfortable mid-70s for the rest of the work week before falling below-normal by the weekend.  There is a slight warm-up to note for next week as today’s forecast was increased 2-4 degrees for most of the week.

Since it’s October, we’ll intersperse minimum temps when necessary, such is the case today, for Spokane.  Low temps are set to fall to just a touch above freezing at 33 beginning Sunday and extending into the middle of the week.  The first true freezing day is forecasted for the 17th.

Denver had a very large reduction to next week’s daily highs as the 9th is expected to reach just 47, 12 degrees below yesterday’s forecast, and 22 degrees the normal high for that day.  Temps will warm up quickly however, as highs reach back above normal just three days later.

The 10-Day RFC is set to fall 1,800 aMW over the next four days before bouncing back with an additional 300 aMW to round out the forecast.  STP remains above the 10-Day forecast until the 8th.

Total ISO gas outages increased over the past week, enough to overtake hydro as the leading source of outages with 5,375 MW reported today (4,487 MW for hydro).  Geo increased roughly 80% over the past week to total 463 MW, while Bio and Wind also saw less significant increases. 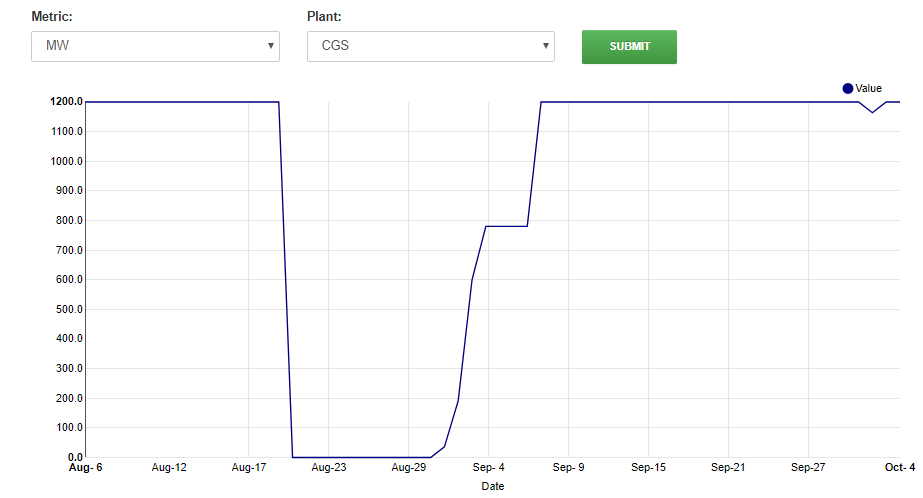 CGS fell to 97% on Monday but recovered by yesterday, creating just a momentary blip on its MW graph. 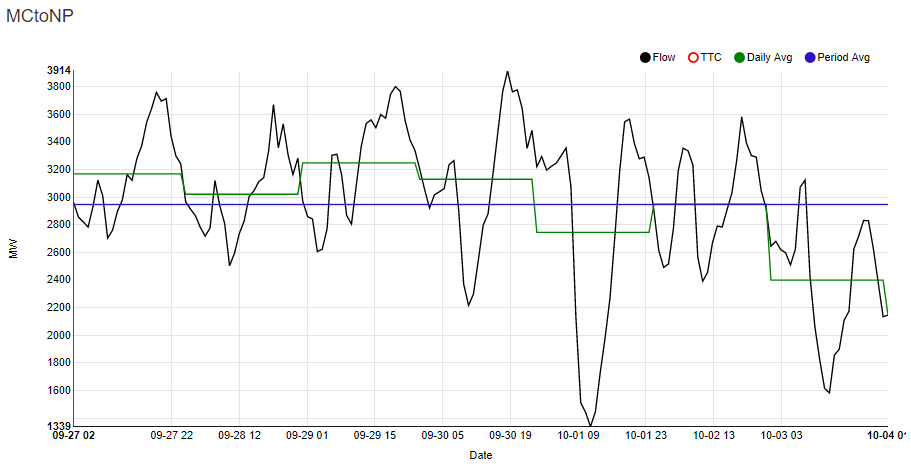 MC-NP average daily flows fell to 2,399 MW yesterday a decrease of more than 700 MW week-on-week, and 550 MW day-on-day.  This drop was aided in part by flow dropping to 1,582 MW in mid-day coupled with no large spikes in flow as seen in previous days in the week. 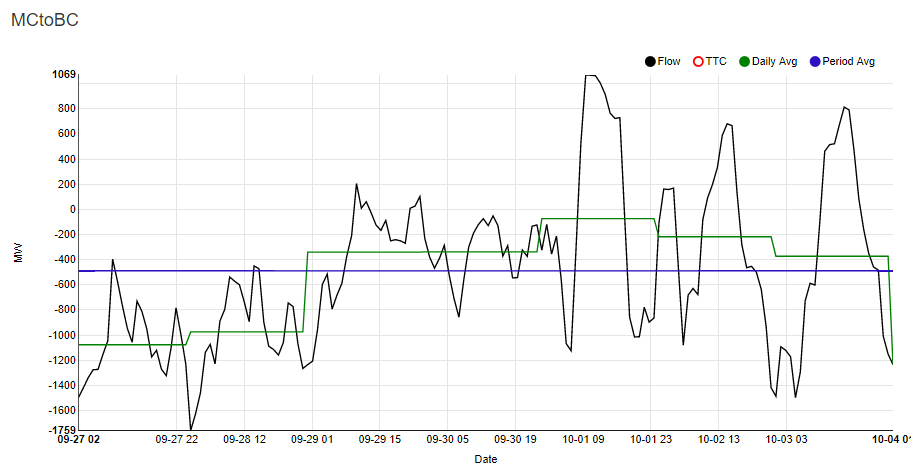 October brought a change in tides for MC-BC as average daily flows come ever-closer to neutral (-73 MW for the 1st), while hourly flows now regularly head north.  Yesterday finished with a daily average of -373 MW, up roughly 700 MW from one-week prior, while the highest hourly average peaked at 814 MW at 3 PM.