Weak weather over the weekend, throw in some wind, makes for some weak cash:

So weak, Mid-C’s LL traded higher than HL, which also speaks to a tightening in Northwest water. Also worthy of mention, the cash spreads between NP & SP have disappeared, the two are trading flat to each other, despite relatively wide Socal & PG&E Citygate prices. Northwest gas remains the dog of the WECC market, trading nearly a $1.00 beneath PG&E. That is a surprise, given each hub’s relative gas noms for power: 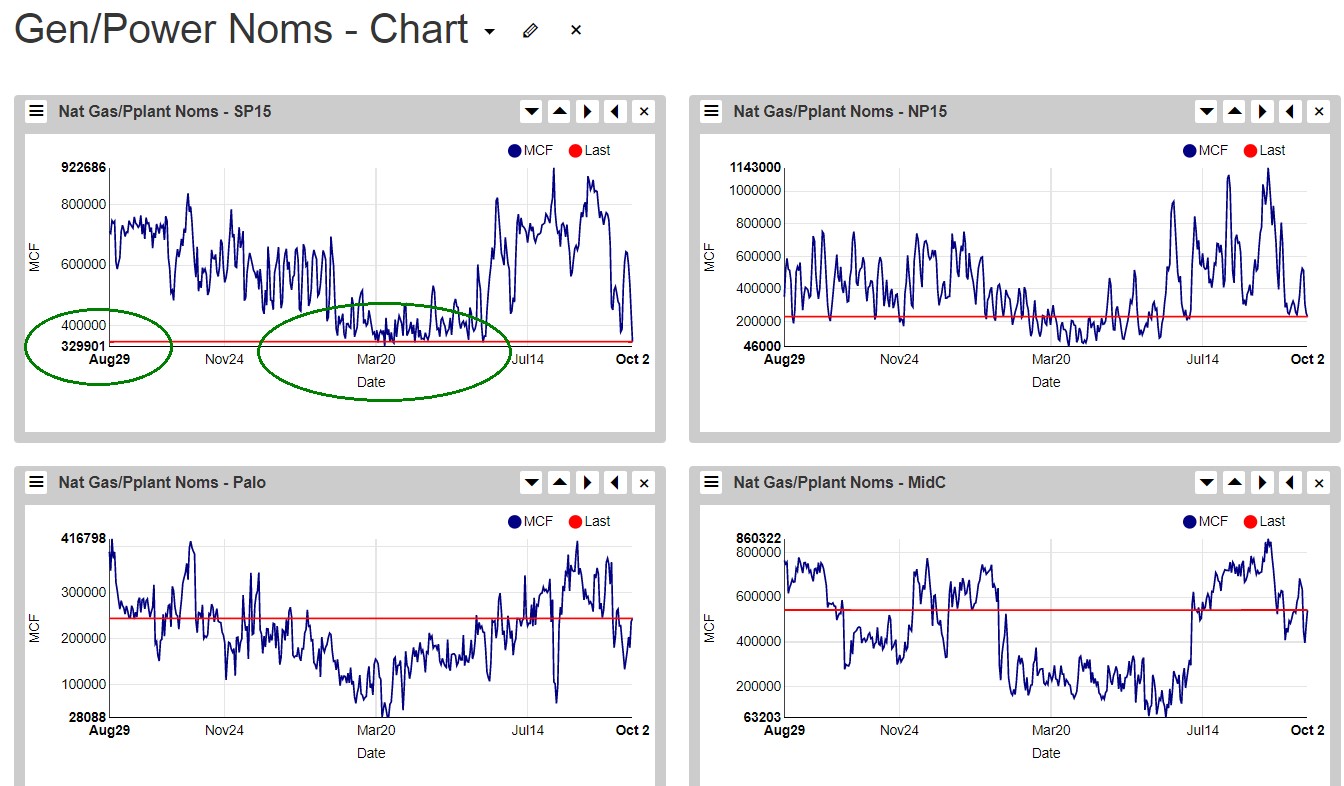 SP’s noms settled lower than they did anytime last year while the MId-C’s are more like an average winter day. Palo too remains strong, and that hub will only get tighter as summer just won’t quit in the desert, now the City of the Sun is projected to see a few days north of 100 – and it’s October! 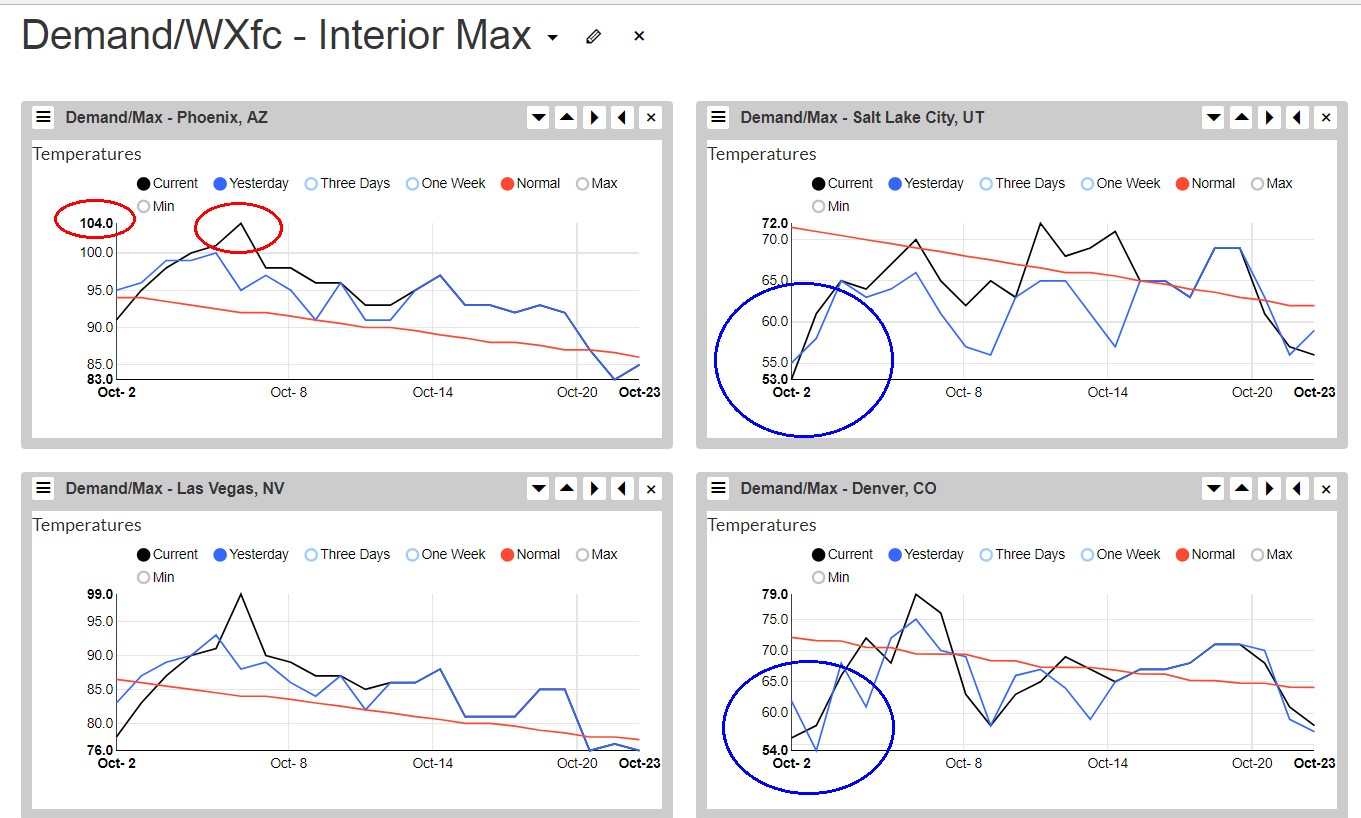 Palo, in fact, has a string of days, that go out three weeks, where temperatures are above normal. The other interior cities, aside from Vegas, have been downright cold. All that means is that Palo won’t have to compete with anyone to serve its peak loads, all hubs will be more than willing to sell power. 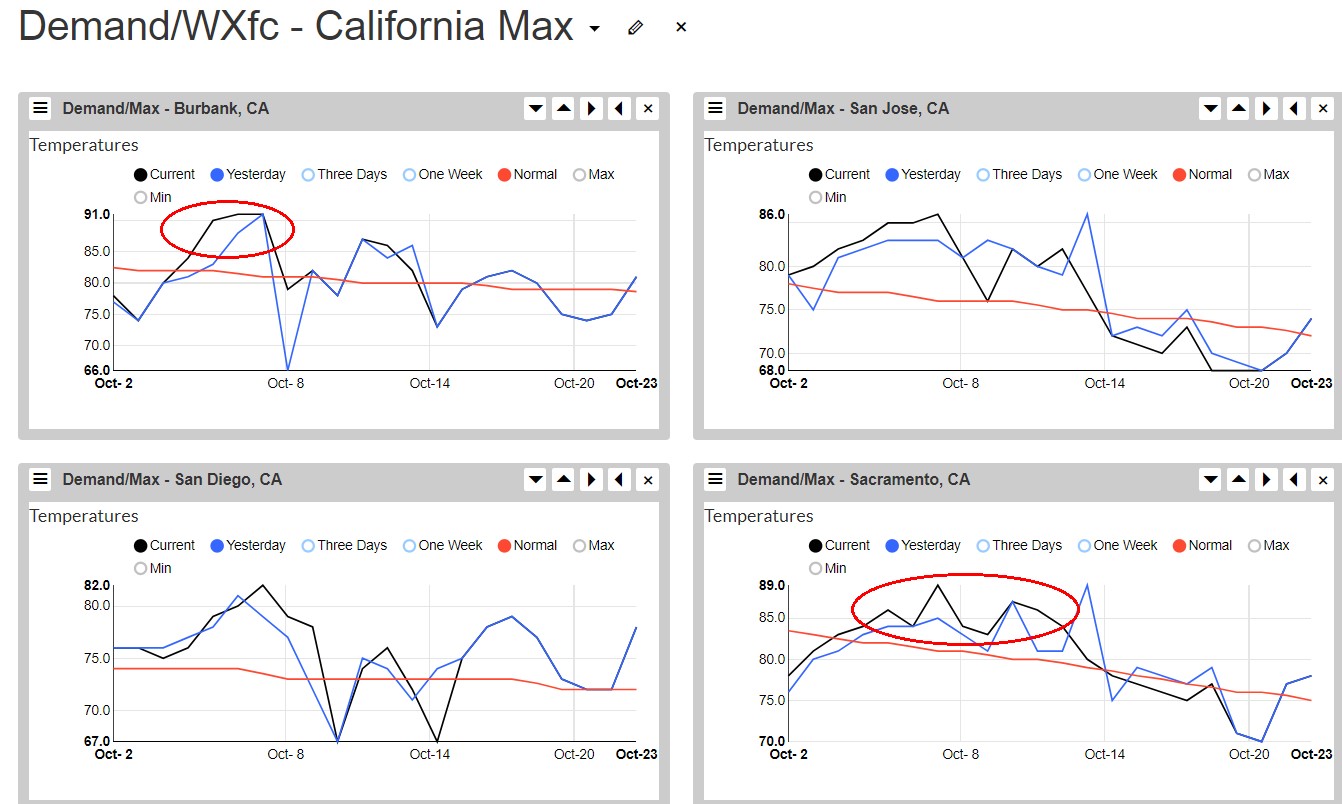 California sees a mini-resurgence in heat, its loads will rally from today, but not that much. Every hub will be ready to flood the ISO with energy should prices dare move up. 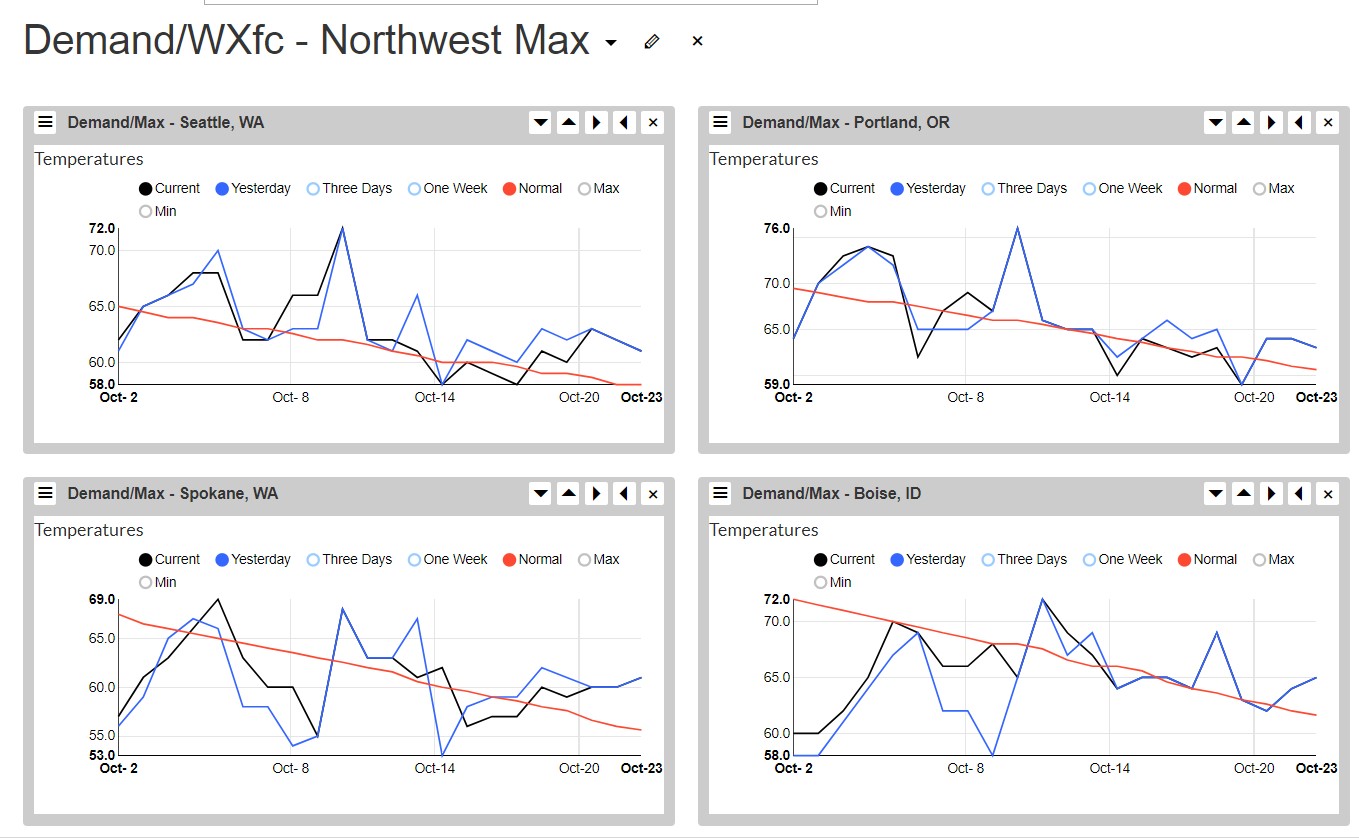 The Northwest will also grow warmer, but that won’t help loads. These temperatures just mean the windows are left open, during the day, and are no load events. 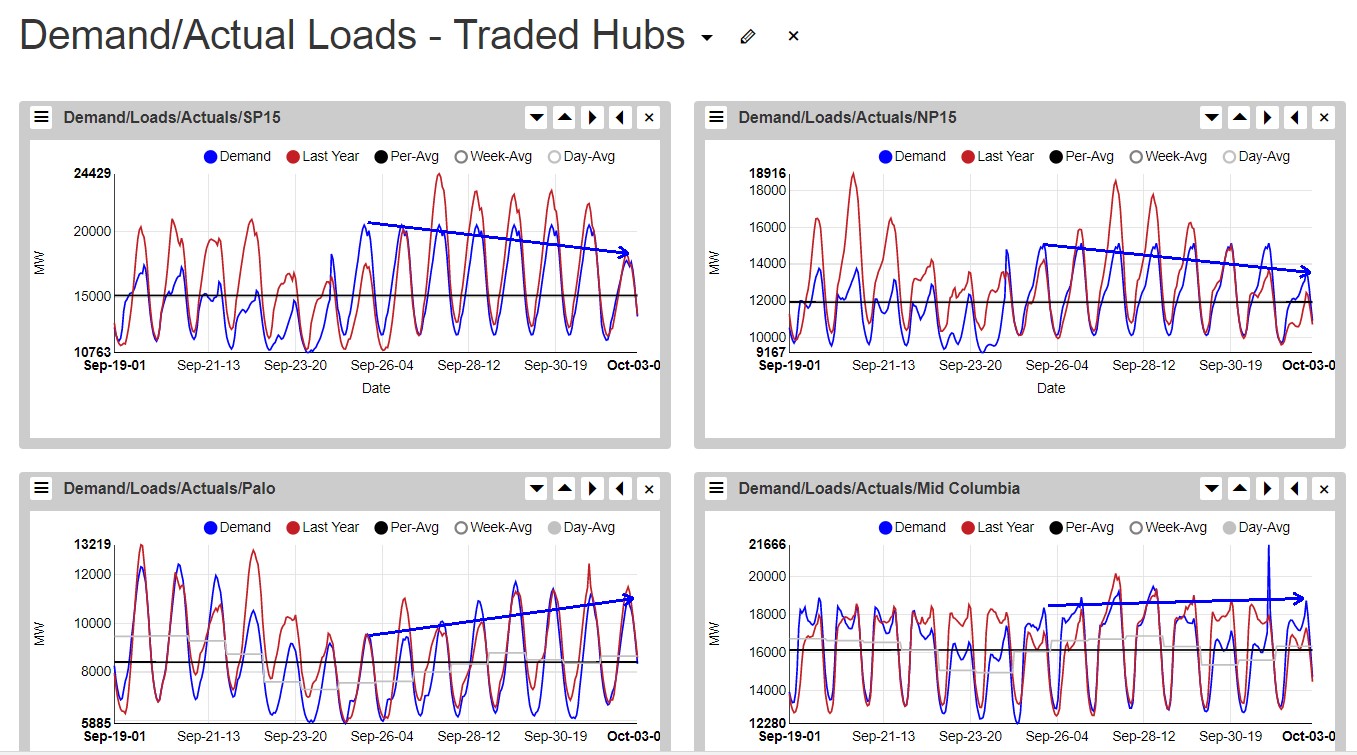 Actual loads are down in the ISO, sideways up north, and up at Palo. Later this week, they will be up in the ISO and Palo, and stay flat at MidC. 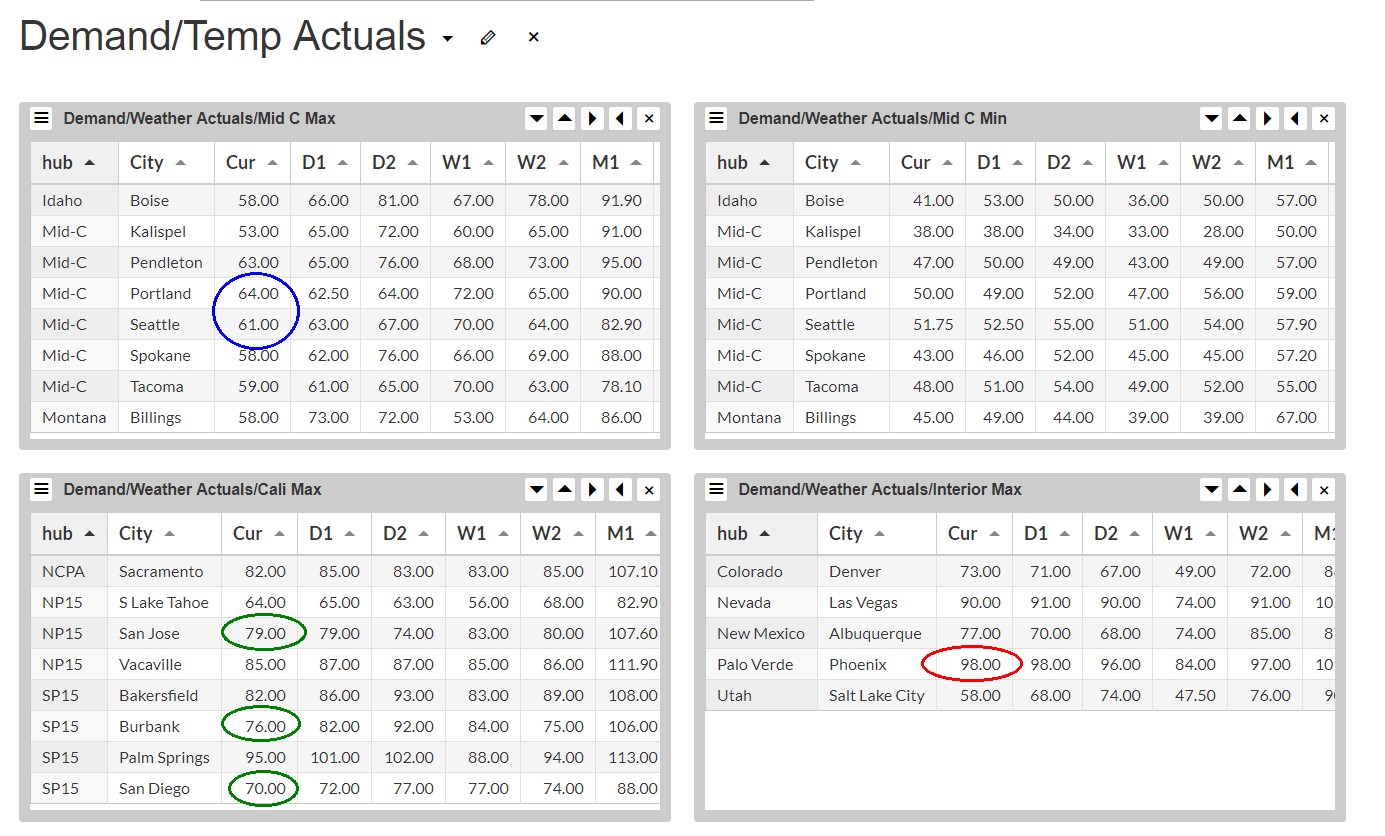 All of which can be summarized by looking at actual temperatures. 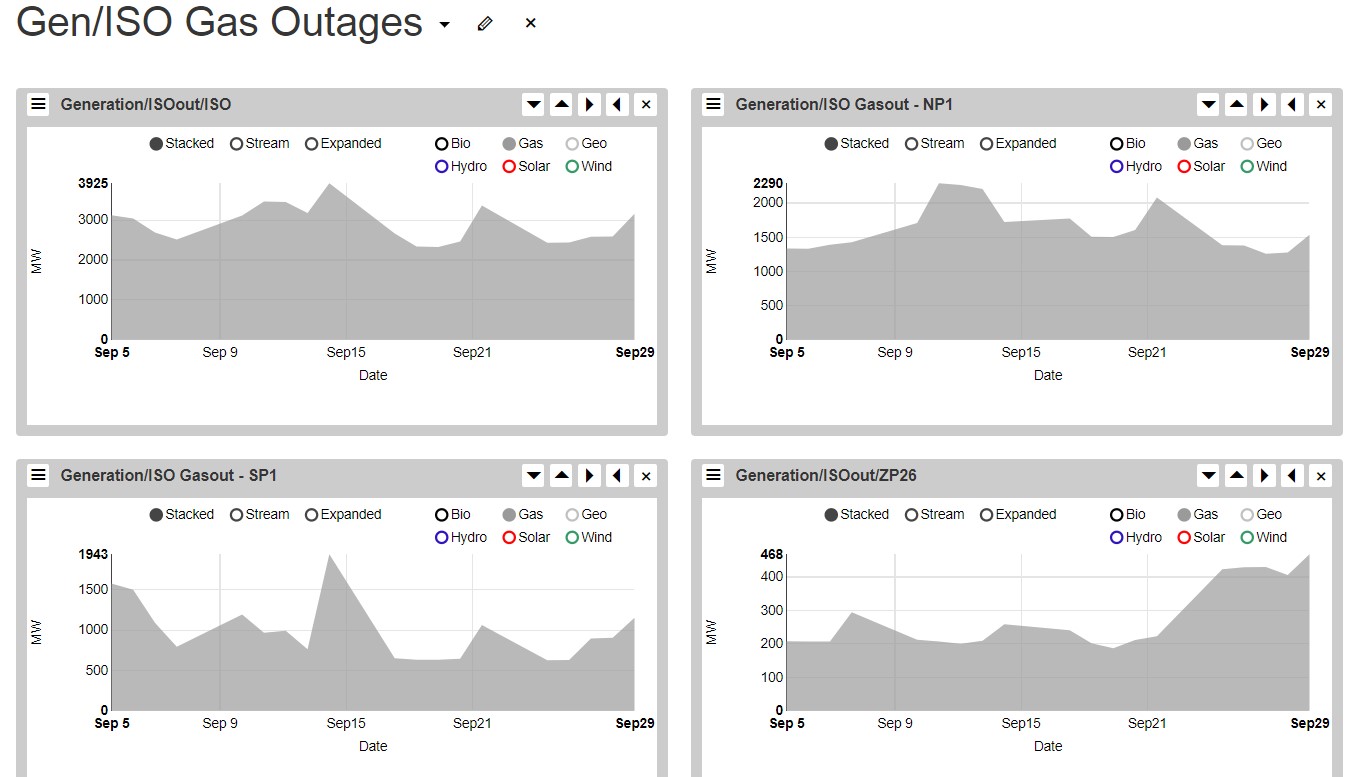 Outages are mostly just sideways; a few new ones come off, a few others return: 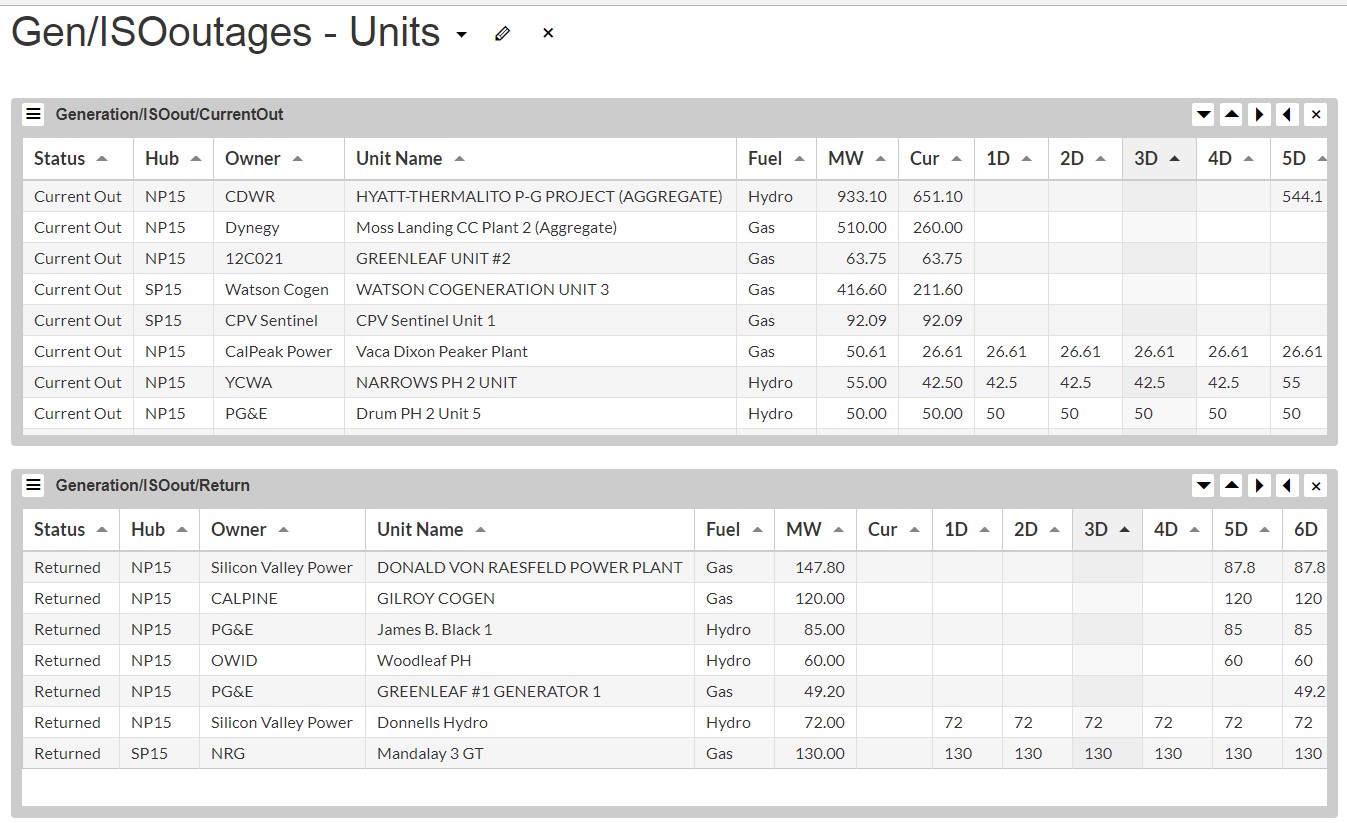 That should change, be starting this or next week, as peak Fall outages occur around Nov 10. For now, the ISO fears Santa Ana, but we haven’t seen that much late-season heat in LA. 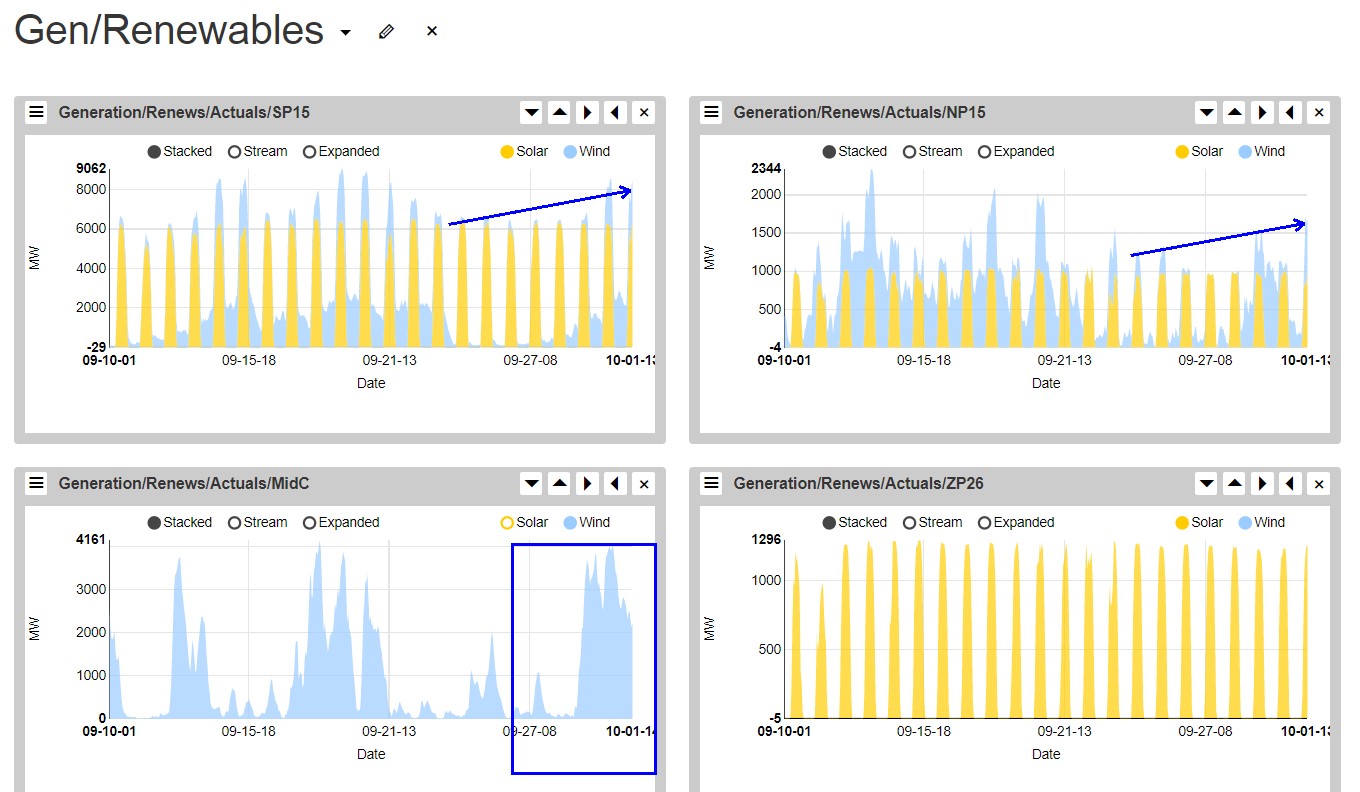 The wind picked up in both the North and the South, no doubt adding to the cash malaise. 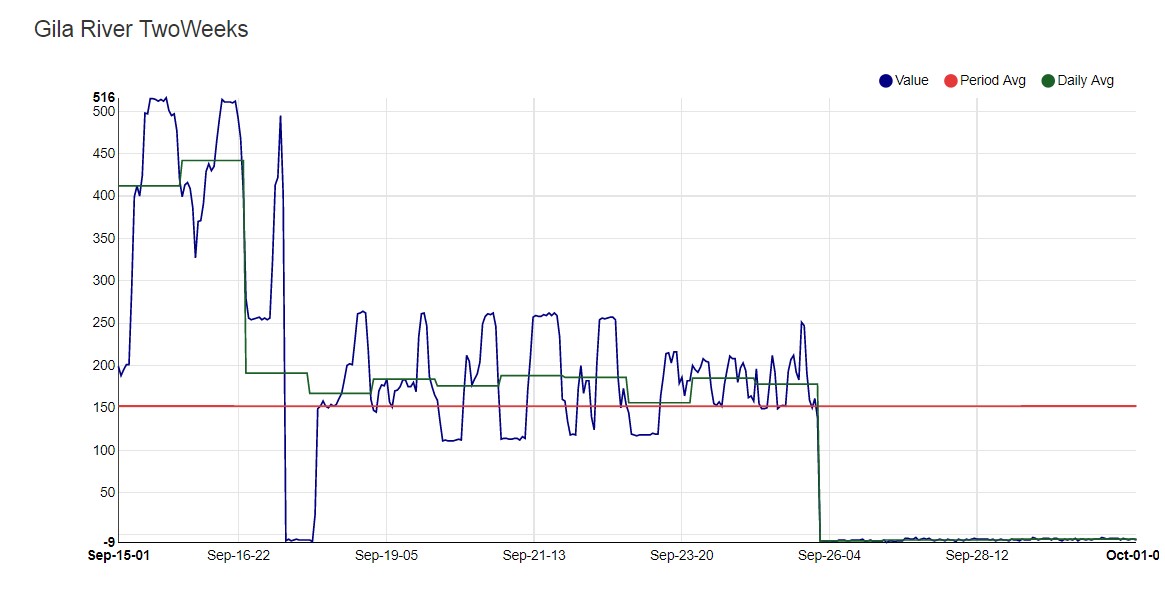 Gila River, the entire plant, is offline, most likely for maintenance, though we find that singular given Phoenix’s warm outlook. We also took note of the declining flows out of Palo, pretty much corresponding to the Gila cuts:

Where PV had nearly doubled its exports to SP, now it cut them back by half. While on the subject of flows, check out the buys on the NI, that’s something we haven’t seen for a while and probably speaks to the weak cash. Equally impressive, the AC didn’t hit TTC once yesterday, despite being de-rated. Further underscoring the abysmal weekend markets.

Final transmission comment, one of the lines in SP is now “offline.” The WESTLYLBNS_BG is out due to “Quinto SW STA-Westley 230kV line relayed. OMS 5315402.” – whatever that means.

Today (actually yesterday) is the start of WY18 and we are pleased about that. Blogging is way more interesting while amidst the throes of a developing water year. We hope this one is as nuts as most are, seems they all have their unique twists and turns. It’s like a carnival ride that changes each time you climb on, never the same, always thrilling. We’ve got a new model for this coming year, too. More on that in a subsequent Product Update.

Our Portland pals are getting stingy with the water, they’ve cut their ten-day across the board. That should prove bullish for today’s STP, at least in the first half of Oct. We still believe the back-end of the 120-day forecast is too tight, but given cuts in front, and no rain in sight, they probably will cut across the board. Brace yourselves.

This is a very dry forecast for the Mid-C; but don’t start lifting those Junes quite yet, it’s only Oct 2. Still, dry is dry and will bias the NWRFC. What isn’t dry is Lake Roosevelt:

BPA has more bullets than ISIS, Un, and Al Queda combined. When will they shoot them? When it gets cold, and it’s not, but this storage overhang must be perceived as bearish heading into winter. Strange that the RFC cuts while GCL builds its reservoir. 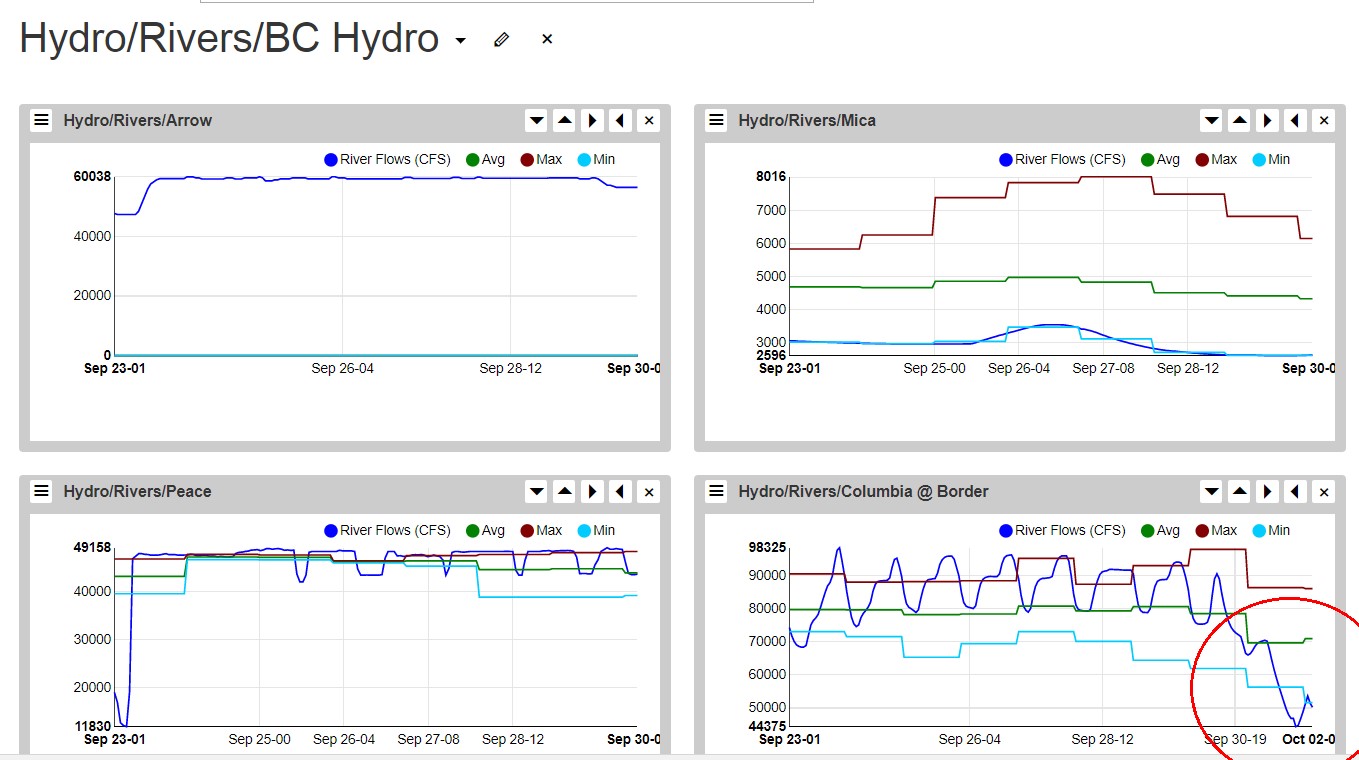 What’s driving those RFC haircuts are the falling flows on the Columbia at the International Border. These are crazy low, and we doubt they stay that way. BCH is sitting on above-normal storage, now they are buying power, at some point the selling resumes.

This chart plots actual ISO hydro using Min, Max, and Avg for HL and LL. Note the declines in HL have ended, the last couple weeks have been sideways, yet the LL continues to fall. This Cal hydro will remain a bearish fundamental through most of the Q4.

The WECC should tighten up a bit off of warmer weather in the load centers, the MidC will tighten off of tightening regulated water, but nothing is that tight. It seems any big term rallies should be faded, but more on that in a subsequent post on front-end markets.