To recap the earlier outlook, the weather warms, and cash should tighten as the week progresses. Palo gets hot, SP just warm, and NP is barely warm. The Northwest is nothing, but its water seems to be tightening.

In this view, we filtered on Months and sorted on Rank, ascending. The circled trades are the ones we’ll post. Big WOWs was the reason they were selected; in other words, we highlight good ranks that had big week-on-week changes. 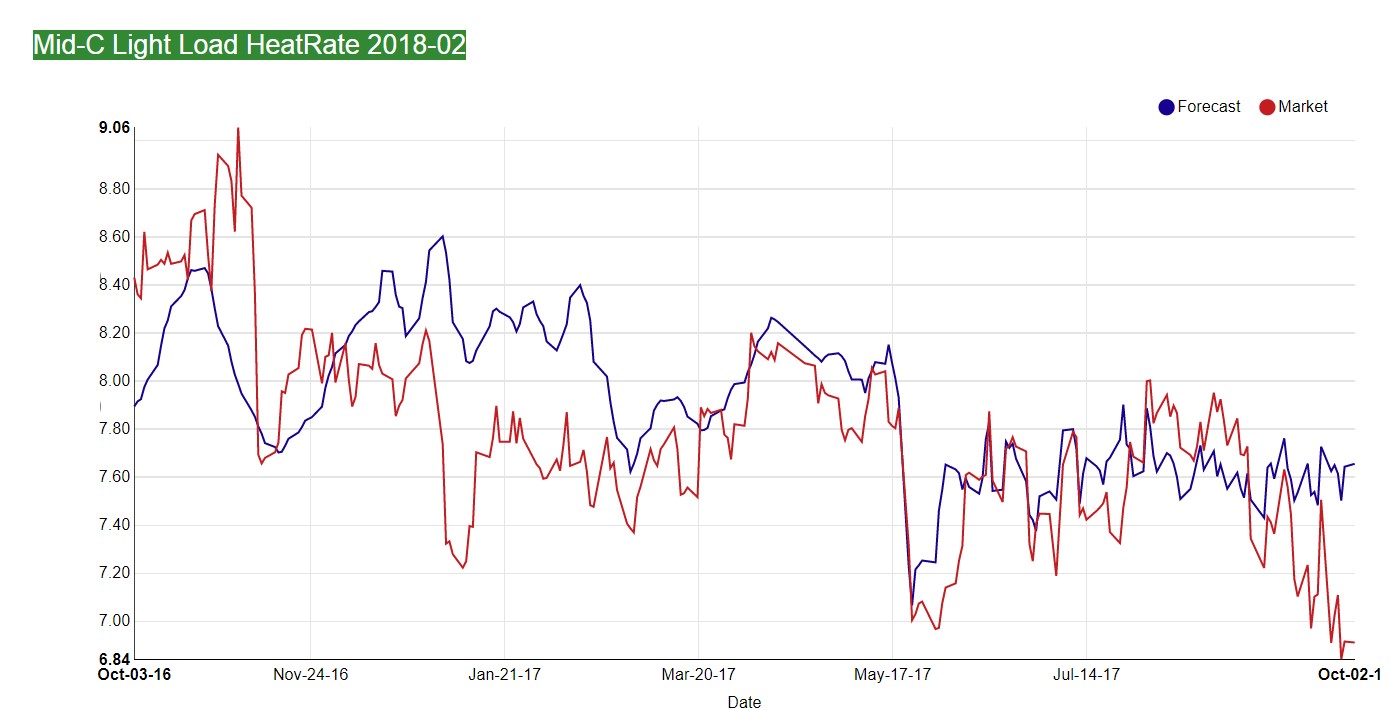 We’re not saying you can actually trade this, but it does lend color to the Q1. The market has pounded the MidC light load for February, and now it’s at a contract low. Red flag for me, given there isn’t any fundamental information about Feb or even Q1. If anything, the RFC’s STP is stupid bullish for Jan, and if that trend holds for the next few weeks, the Feb will be equally stupid bullish. If I were a short ute, I’d be covering my LL exposure because doubt it gets much cheaper. 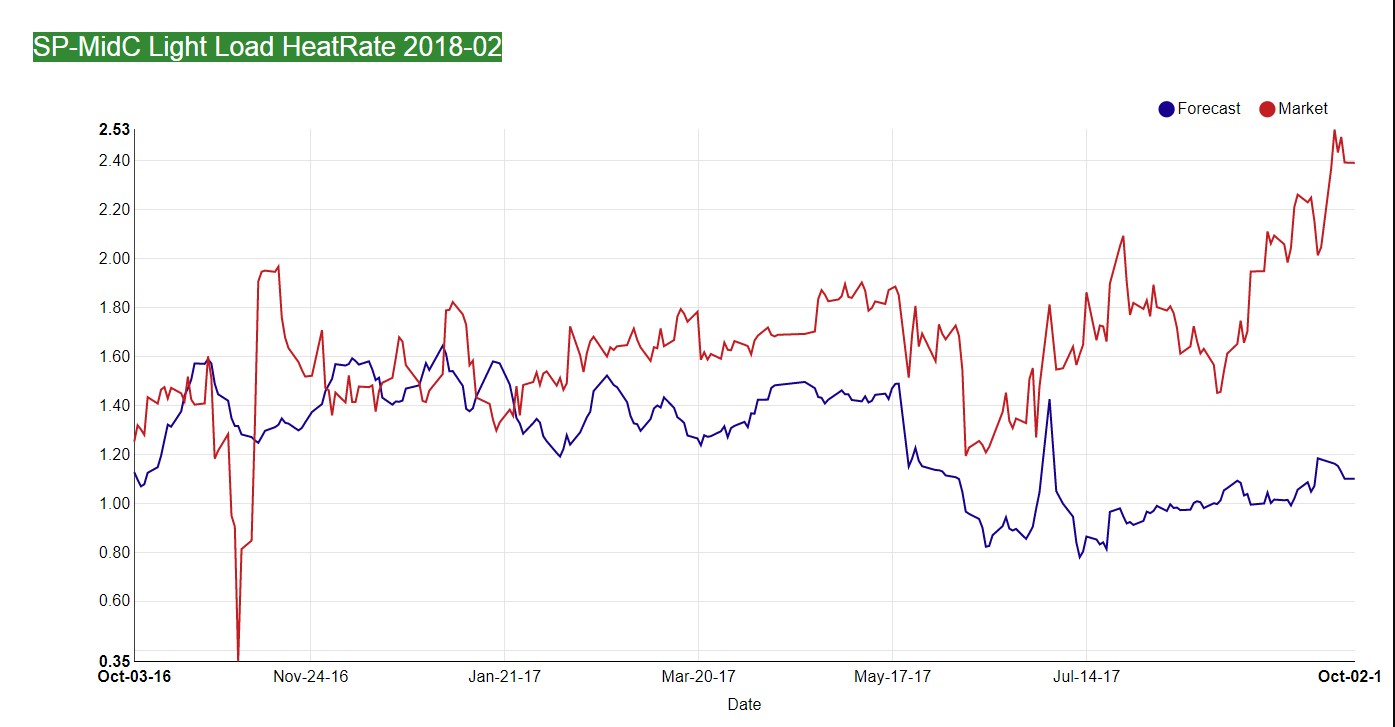 The spread is the same trade as the Mid-C outright but comes with less risk. This isn’t at a contract high; it’s just below after coming off a touch. We like it and would be content to be short this given the dearth of fundy insight into Q1. What we do know is Cal hasn’t seen this full of reservoirs since 2012, and the MidC ‘s are just normal. We are also confident of at least one dire cold event in the north that will drive a flat cash spread when that day occurs all these South to North spreads will be crushed. 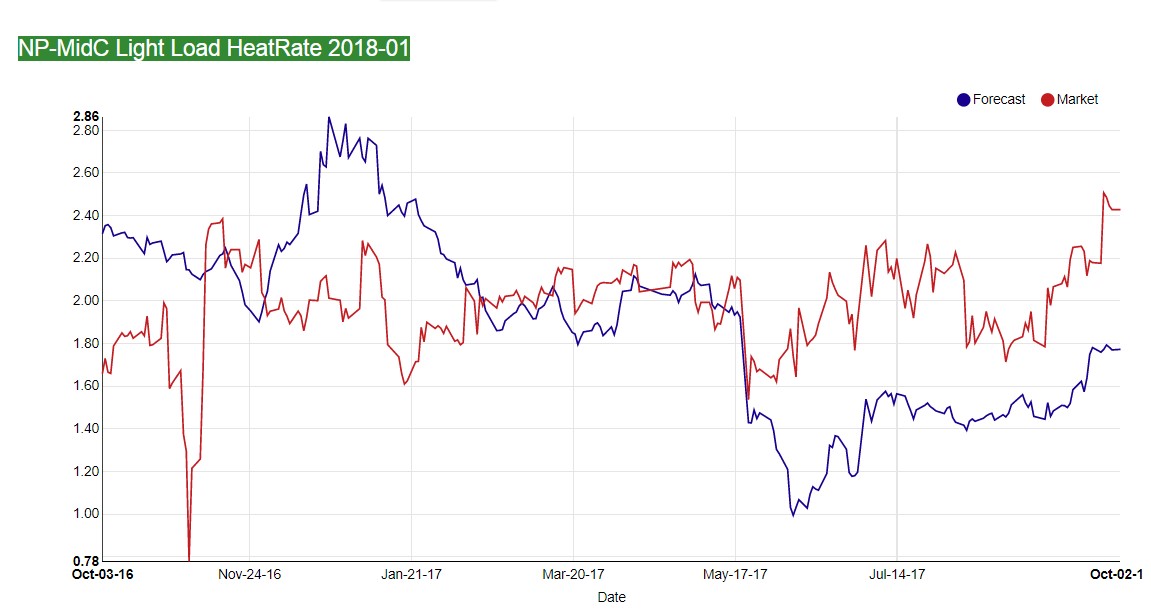 Again, similar trade but you get to put it on via the illiquid NP hub, and it’s January. Still, hits contract high and pulls back, and we’ve already seen some Jan STP forecasts – and those are crazy bullish. Problem with shorting spreads in early Oct is the threat of late CA heat. We don’t see much for 21 days, but until that risk goes to zero, the term spreads won’t retreat. 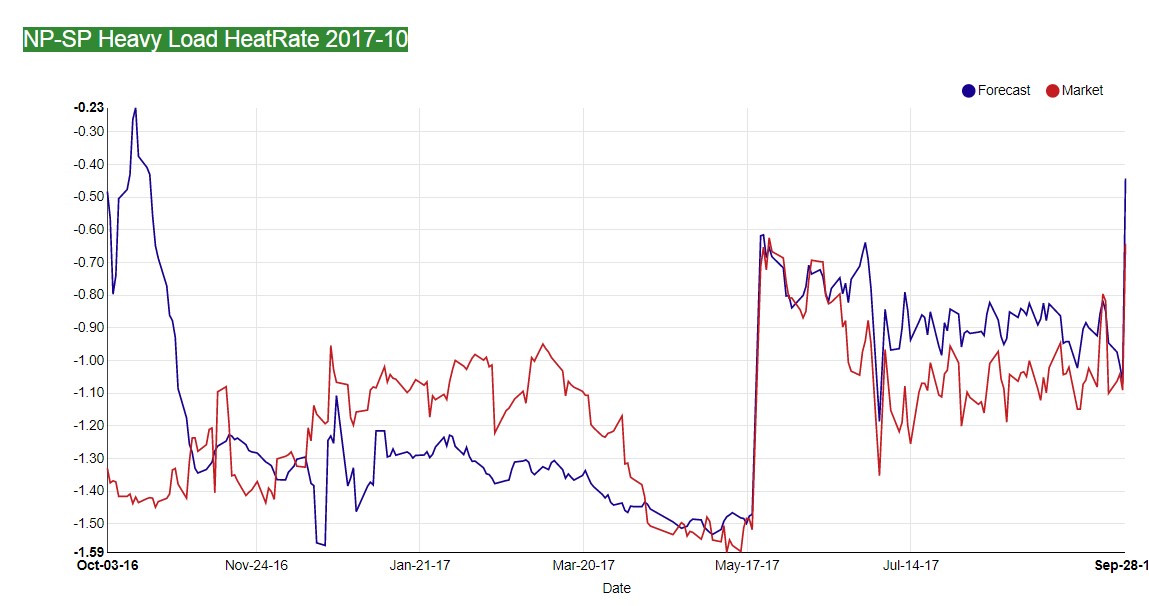 Where the market loved anything “SP” a few weeks back, now it’s having second thoughts.  This BOM spread is on a roll as SP loses its allure, now it’s near a contract high. We’d suggest it might be overdone because NP still is looking at big water and most late-season heat will be down south. 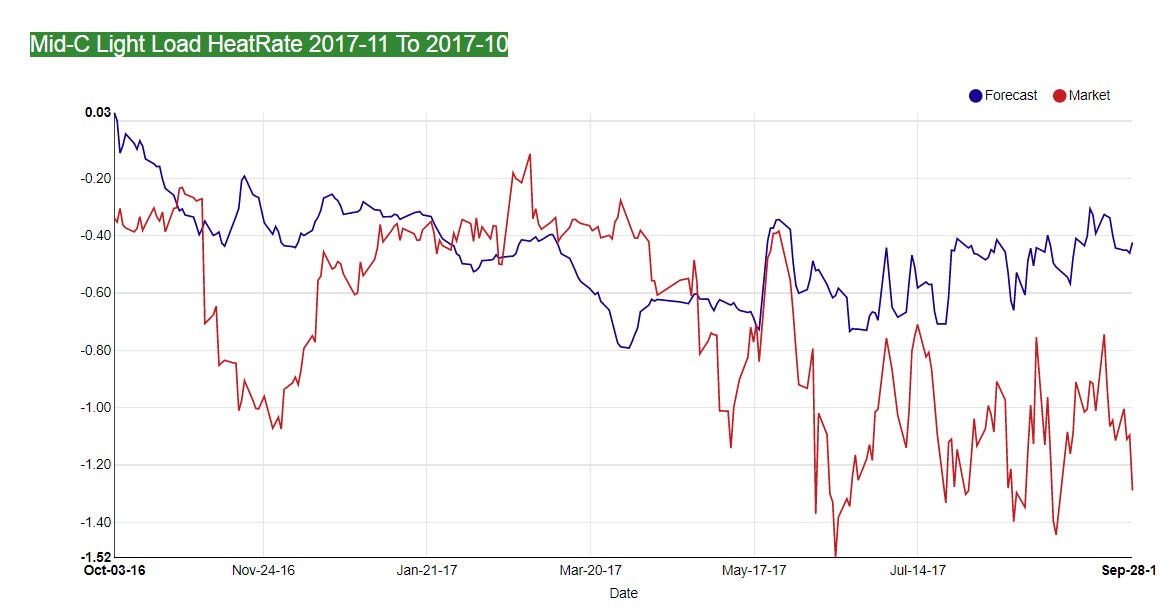 A prmpt|bom roll at MidC; this one, the LL, has been cheap, not cheap, cheap, not cheap, now cheap; but it’s free falling and so grab the knife with gloved hands. The DC is coming down, but not for a few weeks. If this stays strongly biased towards BOM into next week, it would be a good time to own the Nov at the expense of the Oct.

This view is sorted on WOW, descending, which puts the biggest moves at the top. We are looking for big moves and low ranks and ones we didn’t already report on above. One met that criteria: 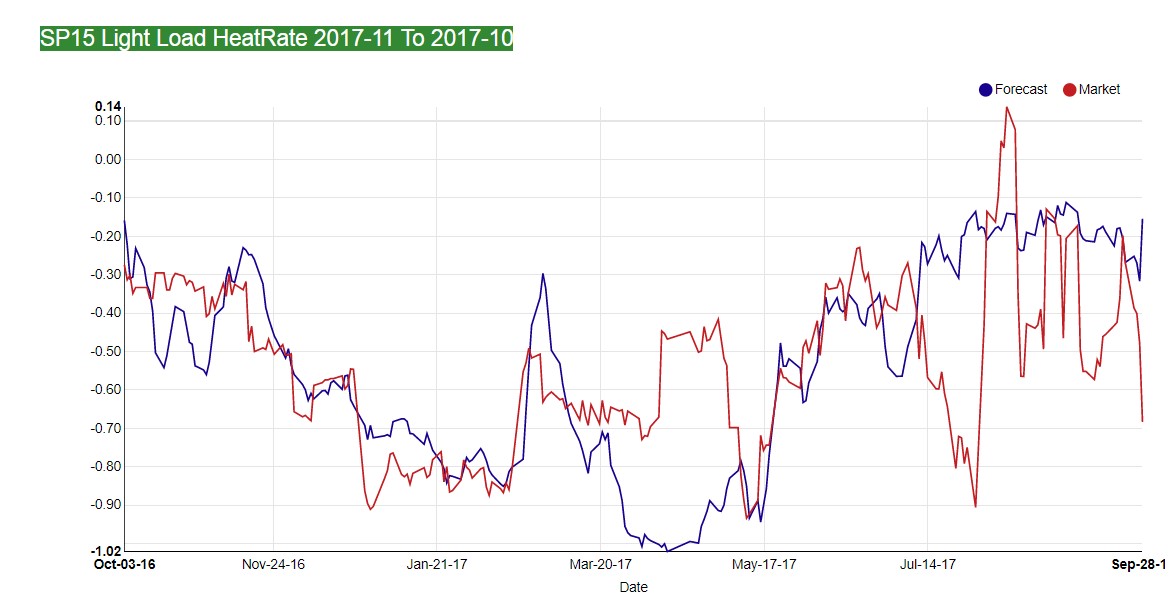 This trade has been all over the place; now it’s getting cheap after being very expensive. Big Oct heat would drive the roll back up, don’t see that today, but if you wanted to buy something (you know, to look busy) this one is probably safe.

These are the trades you look at (WOW, ascending) knowing the bus left the station long ago (at least within the week). 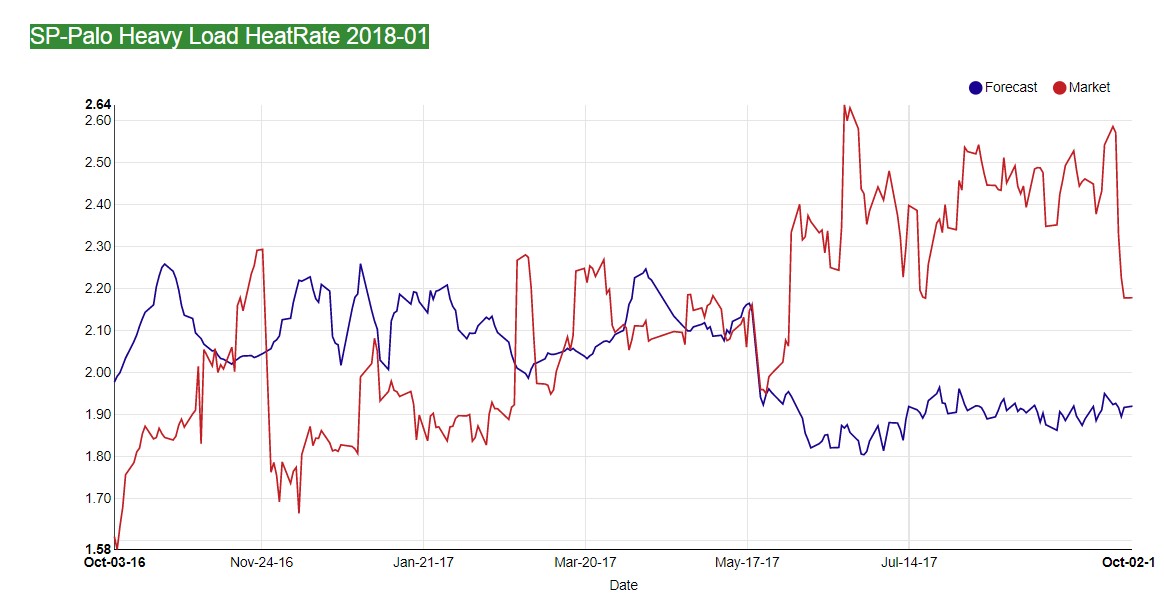 And boy did it, the bus is just about to pull into its destination terminal. And now one might be tempted to own this spread.