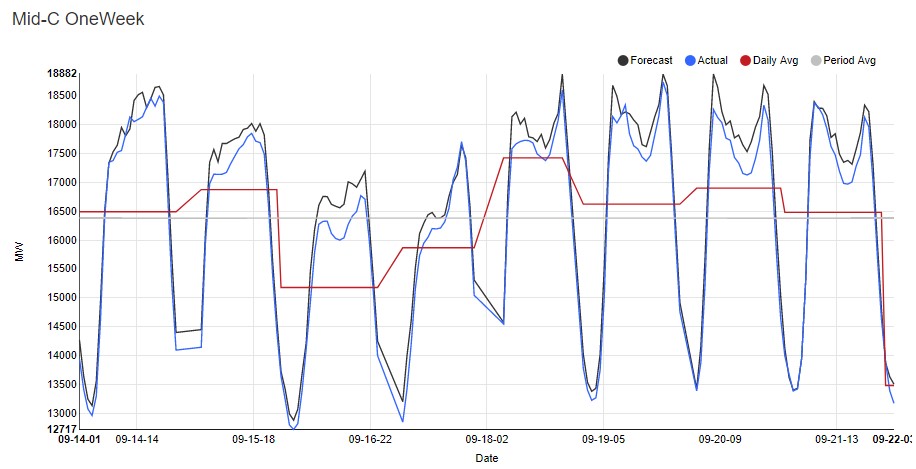 Average daily demand fell roughly 500 MW day-on-day as loads peaked at 18,403 MW, 400 MW lower than yesterday.  Loads stabilized over the past three days after an erratic start to the week. 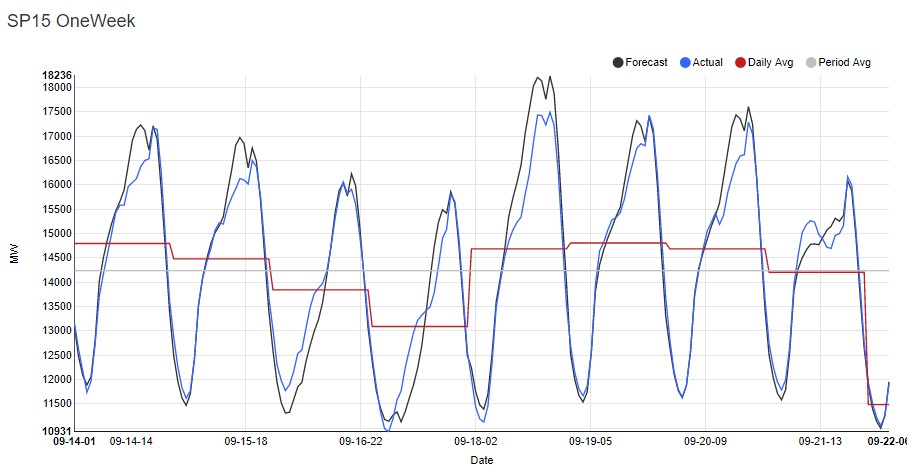 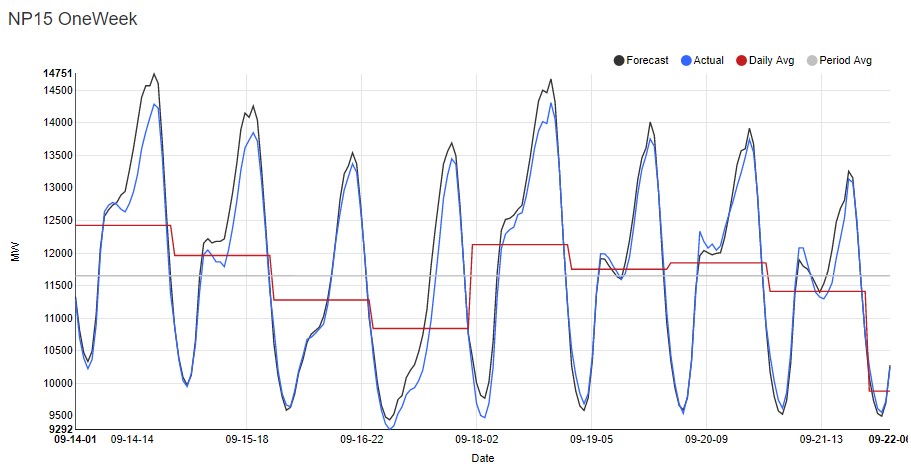 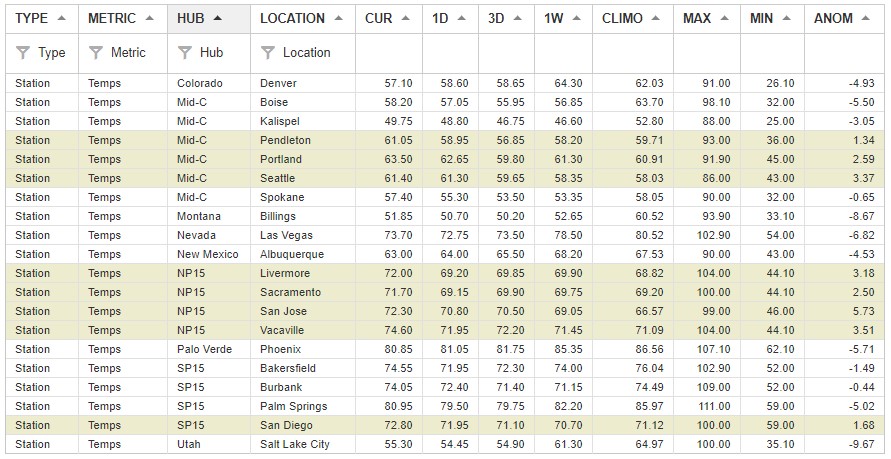 Temps are trending much warmer across the board in the West today, especially in Mid-C which forecasted cool temps for all its stations.  San Jose shows the largest positive anomaly with 5.7 degrees above normal, while Salt Lake continues to trend cool with a massive 9.6 degrees under normal.

Just a few more days below normal for Seattle before temps jump into warm-zone once again.  The middle of next week is forecasting temps in the mid-70s, upwards of nine-degrees above normal, and within a couple degrees of a new 10-year high.

Portland gets its share of warm weather as well as highs soar up to 83 on the 27th, equating to 12 degrees above normal.  The 23rd also marks a change from yesterday with temps 9 degrees higher.  Today’s forecast trends cooler than yesterday’s until that warm up, however.  The 26th comes in 2 degrees cooler than yesterday.

Today comes in seven degrees below normal with a high of 73, but cooler temps will be short-lived as high 80’s return by next week, particularly the 26th-28th with a high of 89 for each day.  Temps should stay above normal until the second week of October.

The 26th marks a five degree increase over yesterday’s forecast as temps rise to 93, nine degrees above normal.  Highs should stay close to the low-90’s through the rest of the month before eventually returning to normal by the second week of October.

Phoenix plummets into the 80’s and should stay there until the 25th.  The low point of 87 on the 23rd equates to 11 degrees below normal.  The next warm up is set for the 2nd with a return of triple digits and a high of 104.

Mid-C gas demand climbed 50 MMCF yesterday, but remains down nearly 200 MMCF since the beginning of the month. 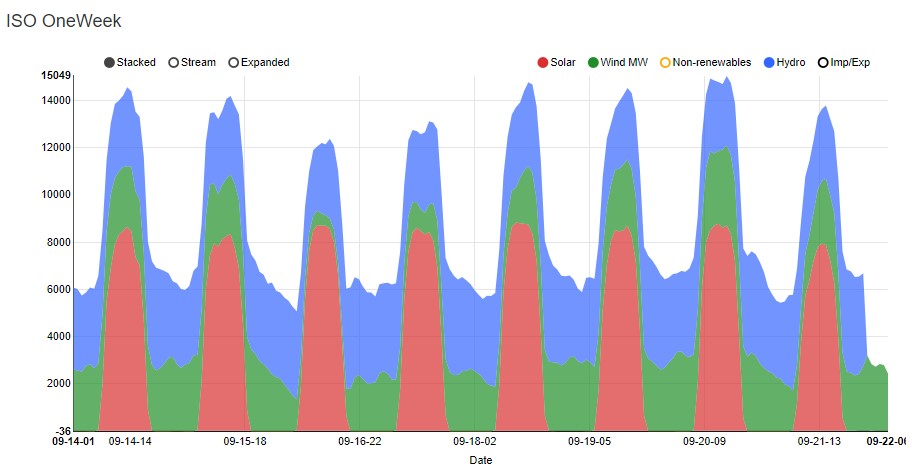 Renewables dropped roughly 1,500 MW as an aggregate yesterday, thanks in part to an 800 MW decline in solar and a 500 MW drop in wind generation. 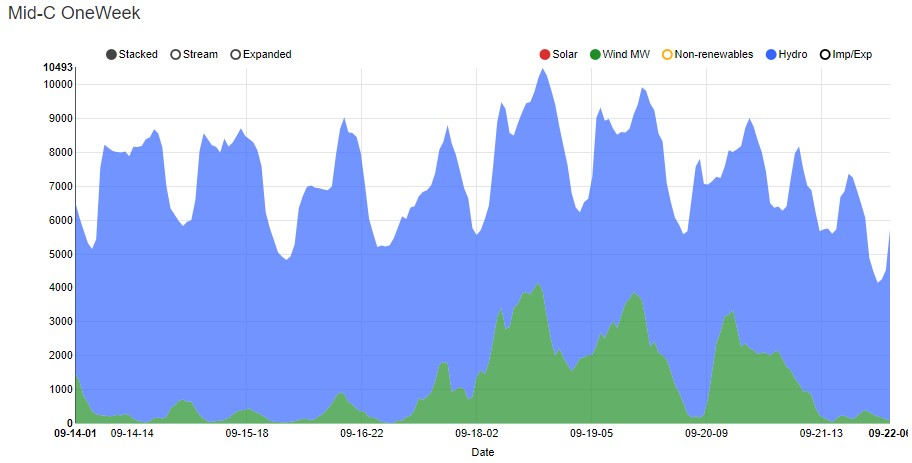 Just 332 MW of wind generation yesterday, down heavily from earlier this week, particularly the 18th which finished with a peak of 4,100 MW. 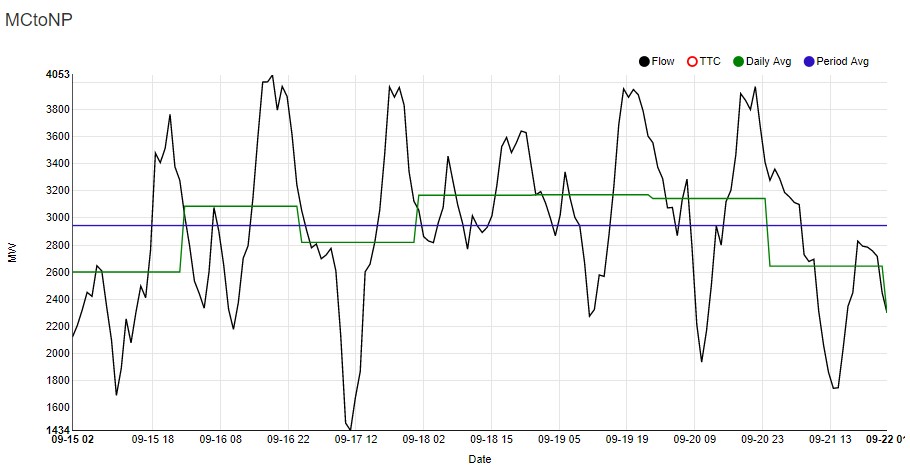 Mid-C to NP daily average dropped to 2,645 MW, down roughly 500 MW from the day before.  The decline was aided primarily by the lack of a spike in hourly flow that had been seen in each of the previous two days.  Flow also dropped to 1,745 MW, the lowest hour in five days. 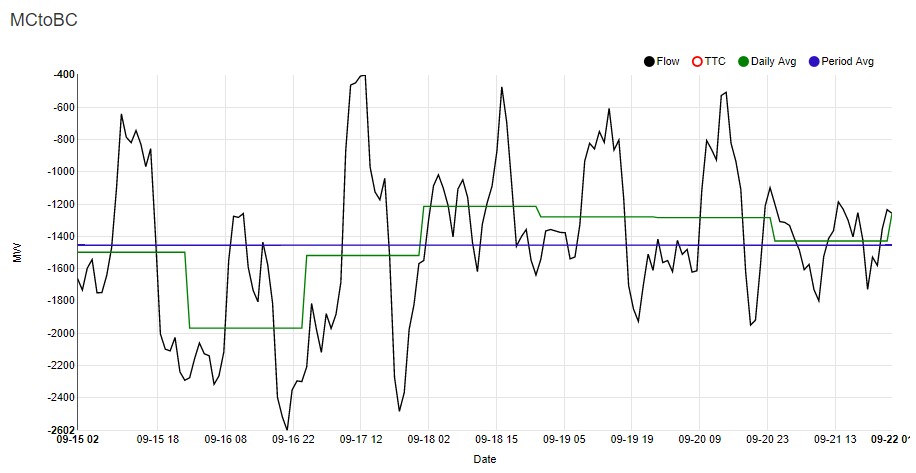 The daily average fell in the MC-BC line as well, settling at -1428 MW, just a touch above the weekly average of -1454 MW.  Again, no high hours to maintain the daily average from the day before as flow peaked at just -1098, down from a high of -507 MW the day prior.