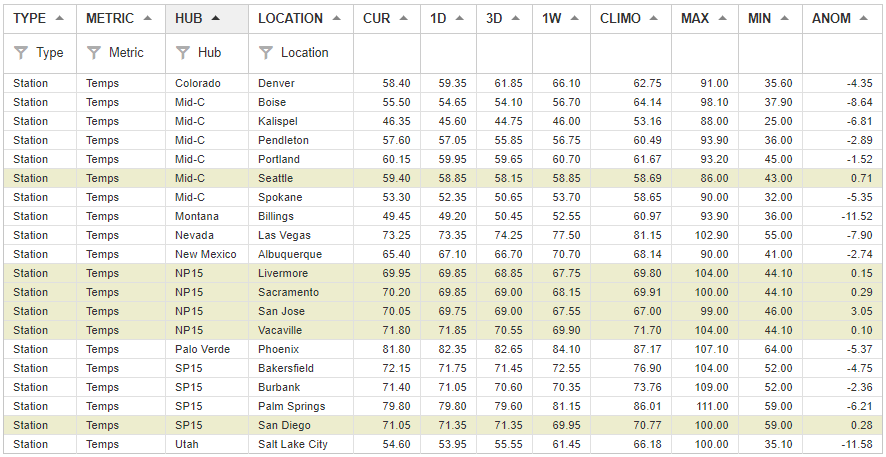 Billings and Salt Lake City lead the way with anomalies cooler than 11.5 degrees from normal, while stations in the middle of or east of the Rockies trend cool as well (4+ degrees below normal).  NP15 has a near monopoly on warm weather as all four of the measured stations show a warmer than normal average temperature of the next 10 days.

Denver’s wild ride continues as highs should reach 88 tomorrow before plummeting to 54 just two days later (21 degrees below normal).  The high of 54 is also noteworthy as it comes in eight degrees cooler than forecasted yesterday.

Unlike Denver, Salt Lake City will not get a chance to start out above normal before seeing the bottom fall out of its forecast as highs move from 75 today to 57 by Friday (19 degrees below normal).  Highs aren’t expected to peak above normal until October.

Much of Burbank’s cooler than normal forecast is coming in on the front-end, specifically over the next four days.  The forecast bottoms out on the 21st at 73 degrees, 12 degrees below normal, before again rising enough to touch 90 by the 27th.

Interior SP-15 is trending even cooler as Palm Springs is set to drop to 85 on both the 21st and 22nd, enough for 14-degree anomalies.  Like Burbank, however, temps should slowly rise back above normal, and we could see triple digits again before the end of the month.

While Phoenix sits above normal for the next two days, highs will quickly fall into the 80s by the weekend, ultimately equating to 10 degrees below normal.  Much like SP-15, highs will gradually climb above average by the end of the month where we should see a return of triple digits.

San Jose is forecasted to stay in the 70’s from today until the 24th where the forecast eventually leads to high 80’s until the end of the month.  Today marks the low point in the next three weeks with a high of just 73, seven degrees below normal.

Despite Sacramento’s 10-day daily average temperatures forecasting above normal, the next several days will be made up of below-normal daily highs, beginning with today’s 11-degrees below normal high of 75.  Temps will once again reach the 90s, but will have to wait for next week to do so.

Portland leads off a chilly Northwest with a high of 60 today, 14 degrees below normal.  Portland should add another three consecutive days of 60-degree highs before again returning to 70-degree days.  The normal high line is set to decrease eight degrees over the next three weeks.

Seattle is in the same boat as Portland, though today may fail to even reach 60 as today’s high is projecting just 59 degrees, 10 below normal.  High-70s are forecasted for the end of the month, potentially bringing new 10-year highs.

The NWRFC comes in above the STP for 9 of the 10 days (today’s being the lone day that falls behind), though the forecasts prior to Monday’s show up significantly higher than today’s, particularly on the next two days.

Gas outages continue their rapid decline, having dropped nearly 1,600 MW since the 15th of September.  Hydro still leads the way in outages with 3,845 MW, roughly 1,500 MW more than gas.  Wind outages nearly tripled since the beginning of the week, and now sit at 363 MW. 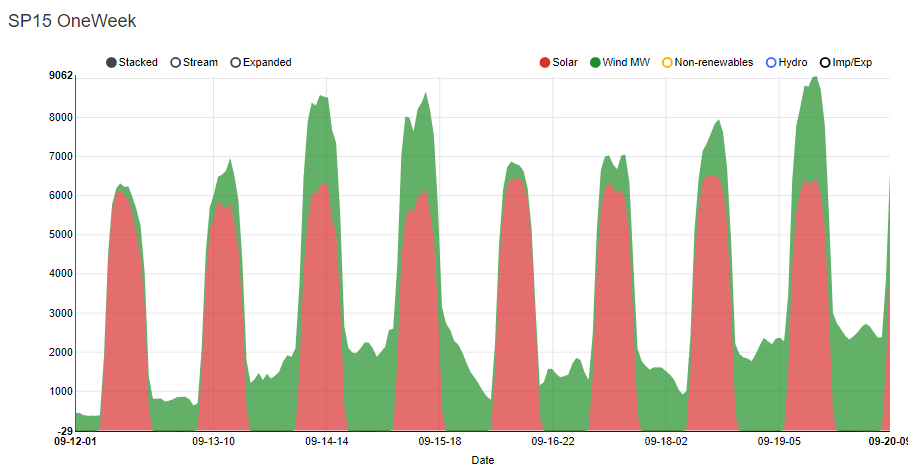 SP-15 wind increased 1,100 MW yesterday to peak at 2,664 at 3PM, marking the highest hour of the week.  Solar stayed relatively steady at 6,400 MW, not differentiating more than a couple hundred MWs over the previous five days. 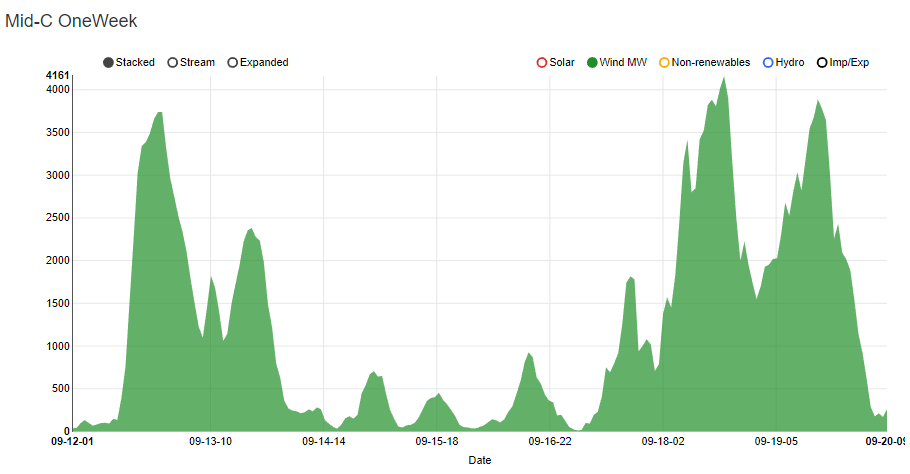 Mid-C produced its second-consecutive day of large wind generation, peaking at 3,888 MW yesterday at 4 PM, down slightly from 4,161 MW the day before. 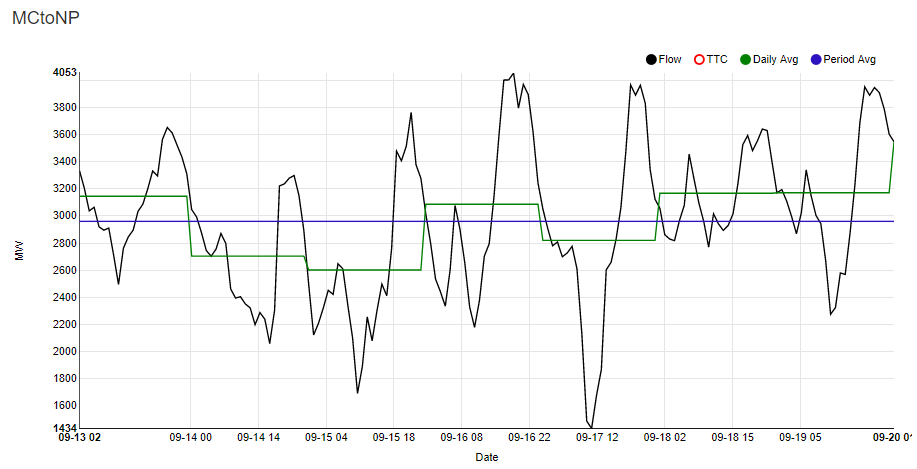 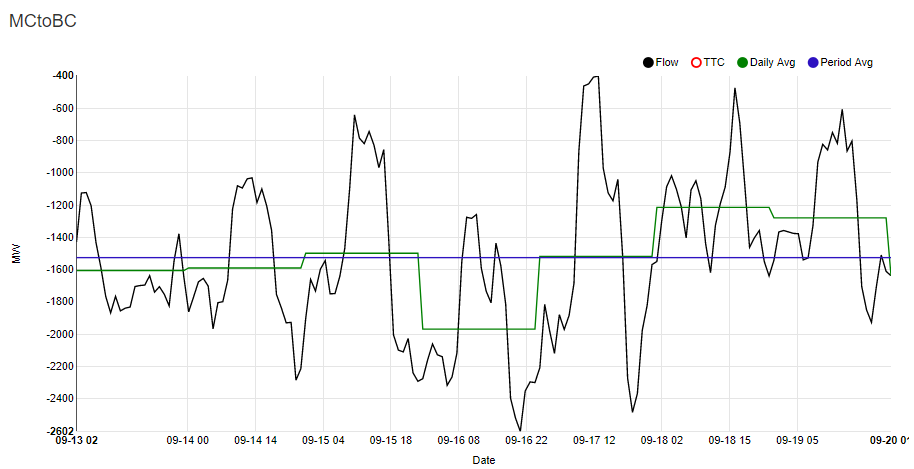 The MC-BC line is slowly inching back toward normal having peaked below -500 MW in two of the past three days.  The Daily average finished at -1,279 MW yesterday, up from -1,968 MW on Sunday.