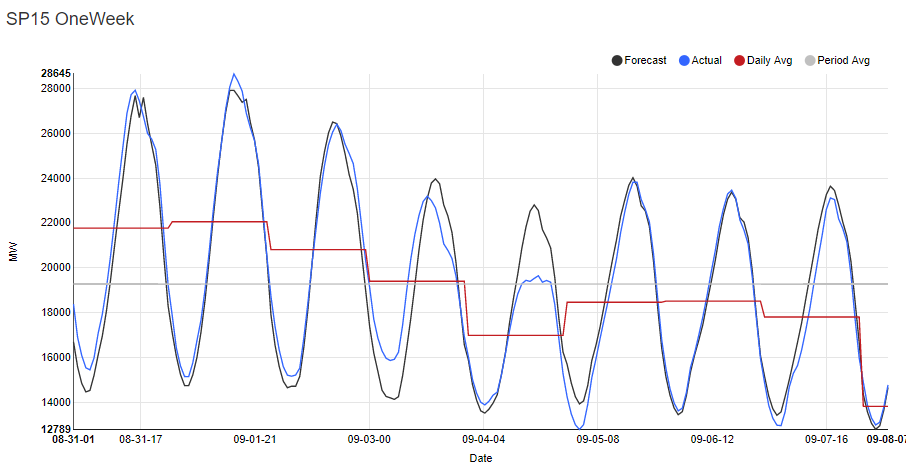 SP-15 loads continued to fall yesterday having come off more than 8,000 MW week-on-week, though peak loads remained mostly unchanged from the day before.  The daily average managed to decrease however, falling from 18,513 to 17,805 from Wednesday to Thursday. 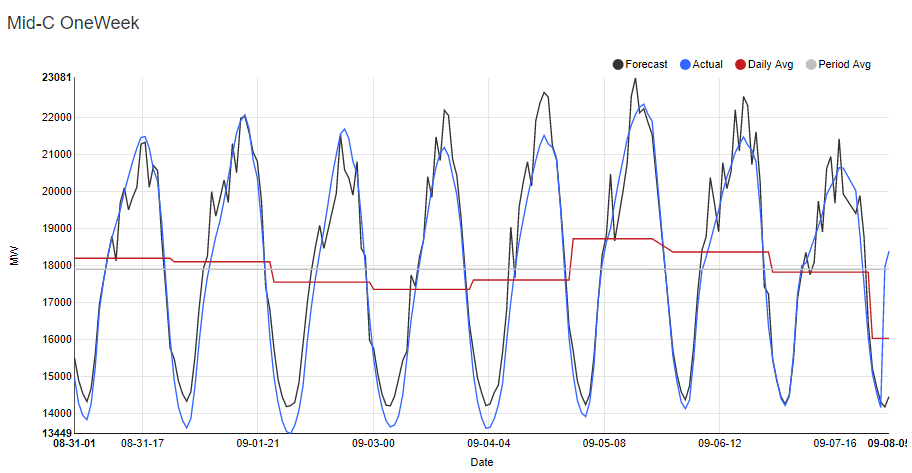 Actual loads in Mid-C fell for the second-consecutive day after peaking at 20,653 MW yesterday, down 800 MW from the day before.  This also equated to a 450 drop in average daily loads, though yesterday’s average remains elevated compared to most days prior to Wednesday.

Mid-C daily max slowly ramped up beginning in mid-August, but has showed signs of that subsiding over the past several days. 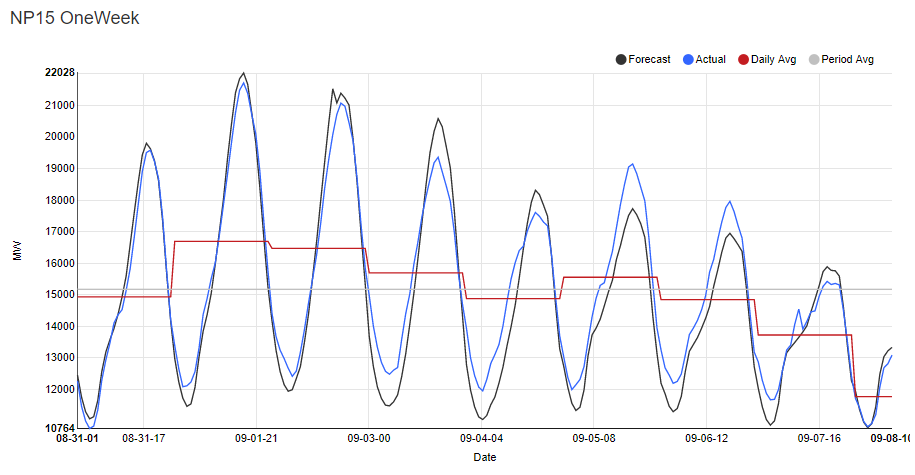 NP-15 demand has drawn a steady declining slope since the 1st of the month, ultimately leading to a peak of 15,889 MW yesterday, down more than 6,000 MW from just six days prior.  This also equated in the lowest daily average since August 25th. 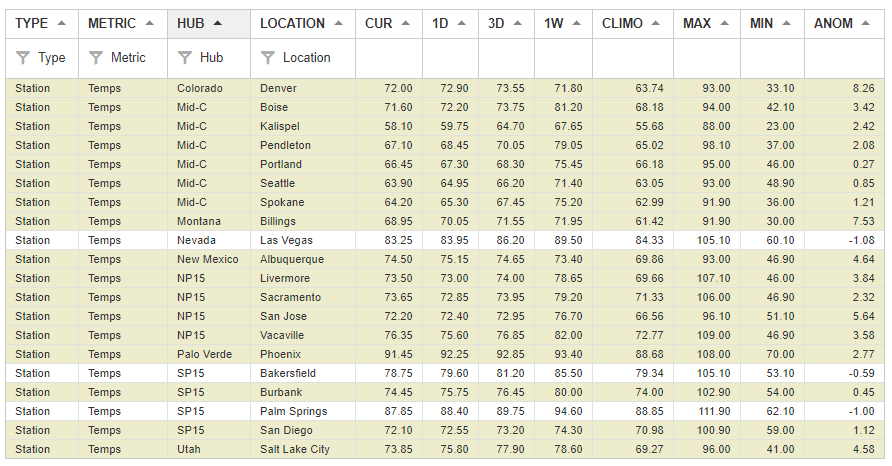 Stations within or east of the Rockies again lead the way with much warmer than normal average daily highs.  NP-15 isn’t too far behind as San Jose boasts 5+ degree anomalies.  Mid-C, while slightly warmer than normal, remains mostly average.

Phoenix should sit on the precipice of triple digits today, but further cooling will be in store heading into the weekend as tomorrow is forecasting a high of just 96.  90-degree days will be short-lived however as high should climb back to 108 as next week begins.

If tomorrow’s 96-degree day on the holds true, it would mark the coolest daily high since mid-July.

Today’s high was pushed up two degrees, and now just barely sits below normal.  The weekend looks much warmer as highs should reach above 90 before again falling below average moving into next week.  Keep an eye on the third week of September as another 90-degree day is forecasted.

Tomorrow’s low of 64 might be the only noteworthy thing in Seattle’s three-week forecast.  The next largest anomaly is a high of 78 on the 12th, otherwise it looks like a slow descent into autumn for Seattle.

Warmer in Portland, but still just mid-80s, not offering many signs of high demand in the near future.  The average temperature line is set to drop from 77 today to 70 by the 29th.

Denver’s above average daily highs are primarily driven by daily highs approaching 90 for most of the next week, particularly on the 14th with a high of 93.  The forecast gets erratic soon after, definitely take it with a grain of salt at this point, but highs could range from the 60s to the 90s beginning in mid-September.

Worth pointing out how hot the billings forecast is over the next week, at least in terms of anomaly.  Tomorrow maxes out at 17 degrees above normal, and never gets within 10 degrees of average until the 14th.

Fairly large cuts were added to the 10-Day forecast for each of the next three days followed by a reversal where as much as 1,300 aMW was tacked on.  This uptick is held throughout the remainder of the 10-days. 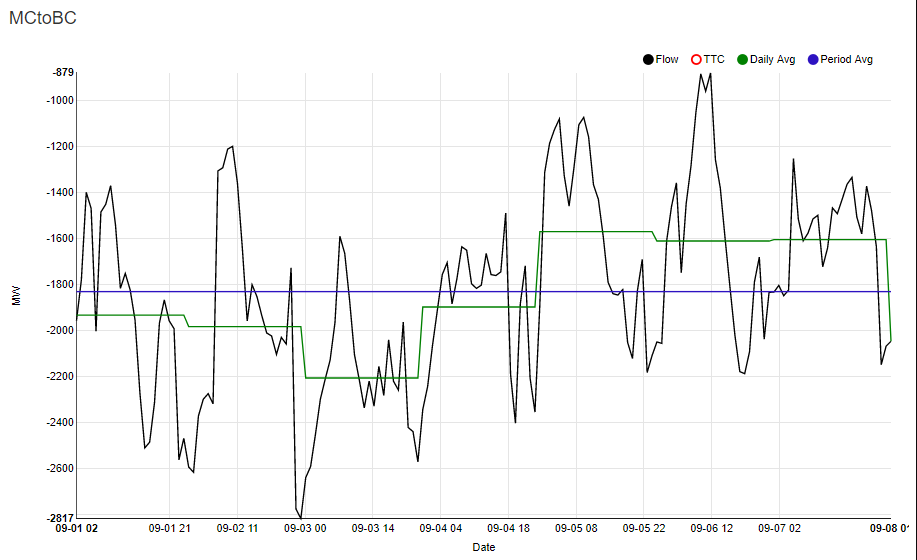 Average daily flows held steady for the third consecutive day having only varied by 40 MW since Tuesday.  Yesterday finished with a low of 2,149 MW at the 23rd hour, narrowly missing an all above-average hourly flow day. 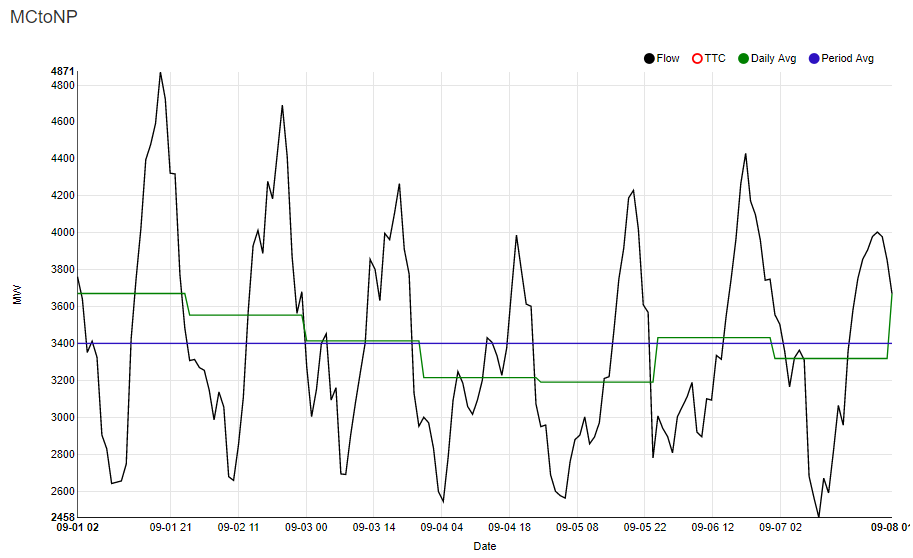