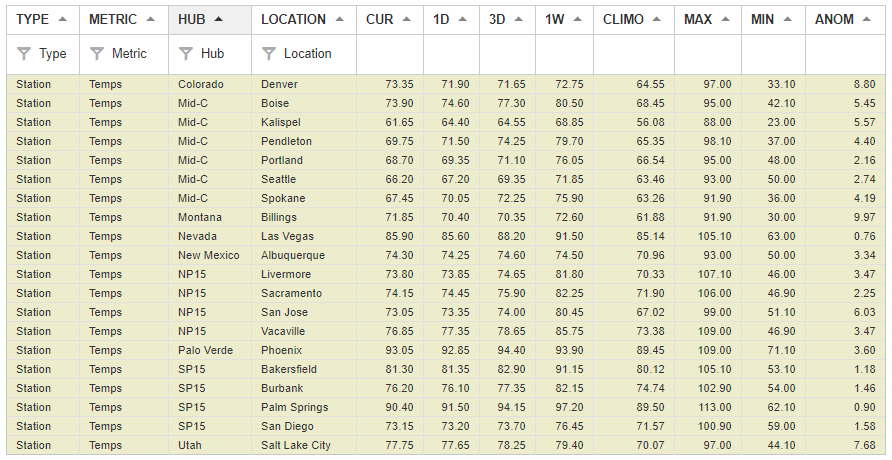 It’s hot across the board over the next 10 days, at least in terms of average daily temperature.NP-15 is led by San Jose and its 6+ degree anomaly.  Colorado is pushing north of 8 degrees, while Salt Lake City shows 7.6, and Billings is just shy of 10 degrees.  Safe to say the Rockies will take on the brunt of the warm up.

Though the average daily high line suggests a steady slope into fall, Denver’s actual daily highs show heavy disagreement.  After today’s high of 81, Denver begins a steady climb each consecutive day, eventually culminating in a high of 93 by the 14th — 13 degrees above normal.

Salt Lake pushes the extremes even higher as highs are almost consistently 8+ degrees above normal until at least late next week.  Temps should peak in the highs 90’s today, and stay relatively close to the 90’s through the 13th.

Seattle’s forecast will cool down rapidly as highs to today are expected in the mid-80’s but should fall well into the 60’s by the 9th.  If the high falls to 64 as expected, it would settle at 8 degrees below normal, and six degrees cooler than expected yesterday.

The 9th isn’t as subdued in Portland as it is in Seattle, but the high should still fall below normal before settling at 73, three degrees below normal.  Until then however, the forecast was bumped up several degrees for each of the preceding three days.

The summer that doesn’t seem to end is showing some legit signs of waning in Spokane’s forecast, but you wouldn’t know that based on the next few days.  Tomorrow is expected to reach into the 90’s once again with a high of 95 — 17 degrees above normal.  Though for the first time in months, there are several 70-degree days in the forecast, albeit later in the month.

San Jose’s helter-skelter forecast begins just a couple degrees north of normal today with a high of 83, but could fall seven degrees to 76 by tomorrow.  Just three days later, the highs are back into the 90’s with a high of 91 on the 10th (ten degrees above normal, and two degrees warmer than suggested in yesterday’s forecast).

NP-15 rounds out its big hit tomorrow with Sacramento’s forecasted high of 79, ten degrees below normal and nine degrees cooler than yesterday.  While Sacramento should reach as high as 96 on the 10th, there are just three more days forecasted into the 90’s through the remainder of the three-week period.

Aside from a potential significant drop on the 13th, Burbank’s forecast is much more subdued, never varying from normal by more than six degrees (on the 11th), and generally hugging the average line throughout the month of September.

Phoenix could drop 12 degrees compared to today and fall all the way to 97 by Friday, marking a high that is five degrees below normal in the process.  Quick recovery in the works however as highs are forecasted at 108 just two days later. 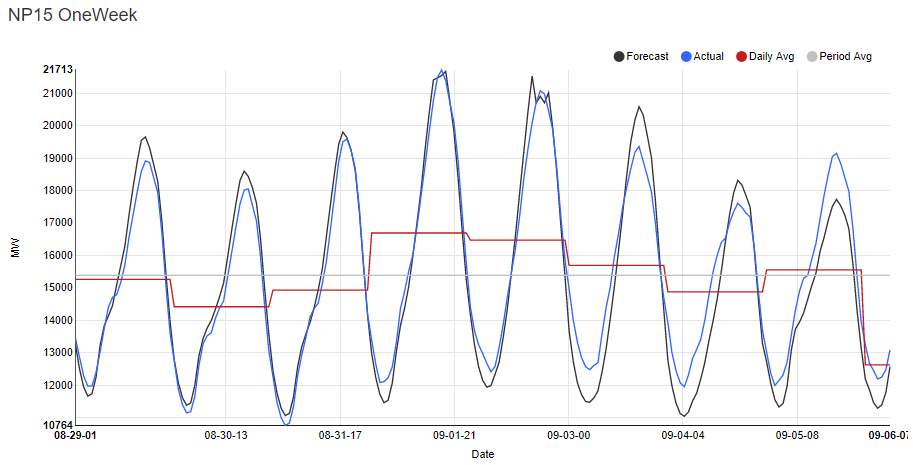 The daily average rose yesterday to 15,555, a nearly 700 MW increase over Monday.  Peak demand still fell well short of every other day going back to the 30th. 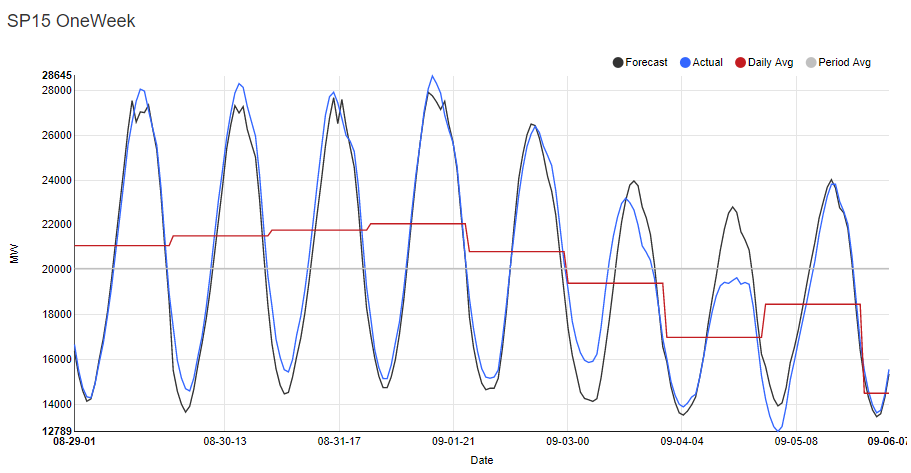 Demand bounced back from a low Monday in SP-15 as well, as the daily average increased nearly 1500 MW.  Despite the increase, yesterday’s average finished below every other day in the previous week, less Monday.  Demand peaked at 23,818 MW, down from 28,059 one week prior.

Today marks the third-consecutive day of 65% capacity for the Columbia Generating Station, though that is a considerable increase over last week’s 0%.  All other nukes registered an expected 100%.

The STP and 10-Day forecast both call for two consecutive days of growth followed by a steady decline until the 11th.  The current forecast is a considerable increase over yesterday’s for virtually all 10-days. 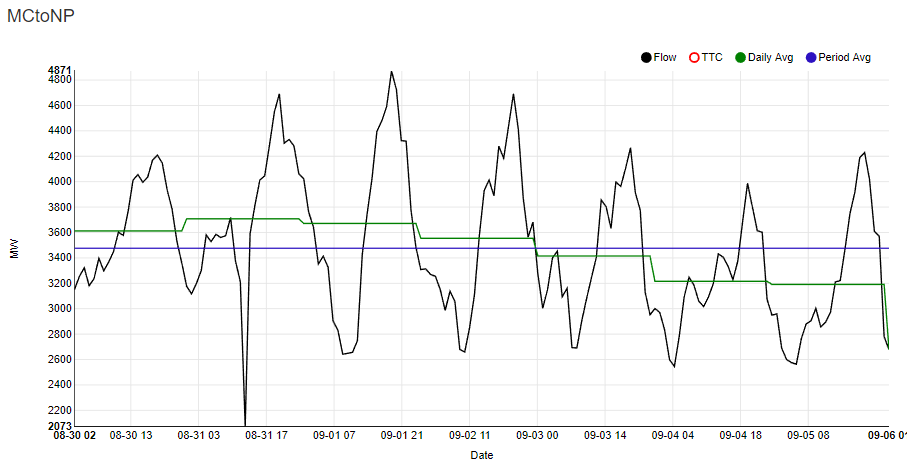 Yesterday marked the fifth consecutive day of decreased flows as the daily average finished at 3,191 MW, down from 3,708 MW at its peak, six days before.  Flow dipped down as low as 2,563 MW mid-morning yesterday, though that essentially matched the low from the previous five days. 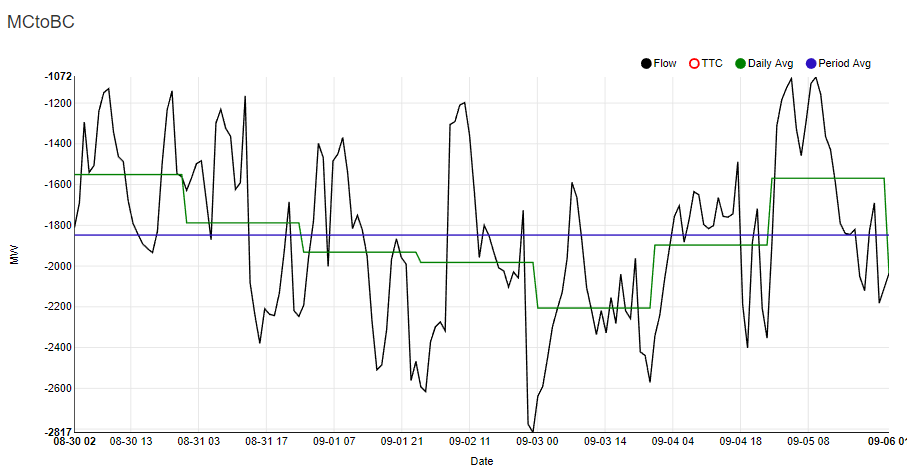 Flow continues to move south with no end in sight as despite a significant day-on-day increase, yesterday’s average daily flow still settled at -1,569 MW.  Peak demand reached as high as -1,072 MW yesterday as well, still far short of hitting neutral for the first time in weeks.