As summer winds down (though you wouldn’t guess that based off any forecast), let’s take a look at recent reservoir level changes.  Dworshak fell off more than seven feet over the past week, while Wanapum added just under four feet, marking the largest changes in Mid-C.  The only notable California change came from Pine Flat and its roughly six foot drop.

Massive increases to the 10-Day forecast throughout all of the ten days, highlighted especially by the 4th which saw aMW elevated from 8,136 aMW yesterday to 10,766 aMW today (32%).

Peak Mid-C loads fell off slightly from Wednesday but still marked the third consecutive day of decreasing demand.  At 21,495 MW, Mid-C is up 1,702 MW from the same day last week, and remains considerably above the equivalent day from 2016 by as much as 2,100 MW at peak demand.

Peak SP-15 loads came off 400 MW yesterday but stayed highly elevated compared to last week (up 8,175 MW), and compared to last year (up 3,089 MW).  With light loads up day-over-day, the daily average managed to increase 135 MW, pushing the day nearly 4,000 MW above the two-week average.

After peaking at 16,097 MW on Monday, PV loads have come off 929 MW by yesterday to finish with a high of 15,168 MW, marking the third consecutive day of decreasing demand.  Yesterday also marked the lowest daily average demand since the 25th.

Keep an eye on the 5th as the high was increased three degrees overnight, pushing it to 105, and eight degrees above normal.  Until then the forecast calls for slightly cooler highs, especially on the third as triple-digit highs make way for a high of 99.

Same story to the southeast as the 3rd was reduced three degrees, and the fifth was bumped four degrees higher, amounting to a daily high of 108.  The forecast gets erratic soon after as daily highs fluctuate above and below normal for much of the remainder of the three weeks.

Burbank’s heat wave is now showing signs of coming to an end a day earlier than expected as the 9th calls for a high of 81, seven degrees cooler than forecasted yesterday.  Today should reach well into the triple digits with a high of 102, 14 degrees above normal and end up tying the previous 10-year high.

It’s a bit hotter in Northern California as San Jose calls for a high of 104 today, obliterating the previous 10-year high of 94, and potentially beating out the average by 22 degrees.  Highs could drop below normal by the 9th, but aren’t forecasted below that point again until mid-way through the month.

Portland was already forecasted 20 degrees above normal, but the 4th and 5th were bumped up a couple degrees and are now expected to reach as high as 99.  Contrast that to the previous 10-year high of 99 or the all-time record of 101.

Even Seattle gets to join the 90-degree party with a high of 91 scheduled for the 5th, equating to an increase of three degrees over yesterday’s forecast.  Highs should stay well north of normal until the 11th, and potentially stay there for even longer.

The day-on-day decline brings SP slightly closer to normal after the 6-month high of 3,515 MMCF from the 28th (previously that high last February). 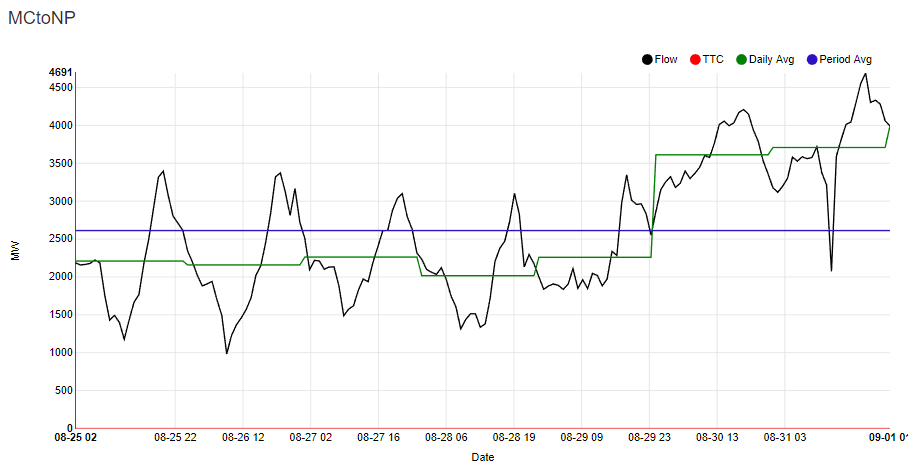 MC-NP flow grew just over 100 MW in daily average compared to Wednesday, bringing the total average daily flow increases to just under 1,600 MW since the beginning of the week.  Hourly peaked at 4,691 MW late last night, easily eclipsing the previous weekly high of 4,209 MW from Wednesday. 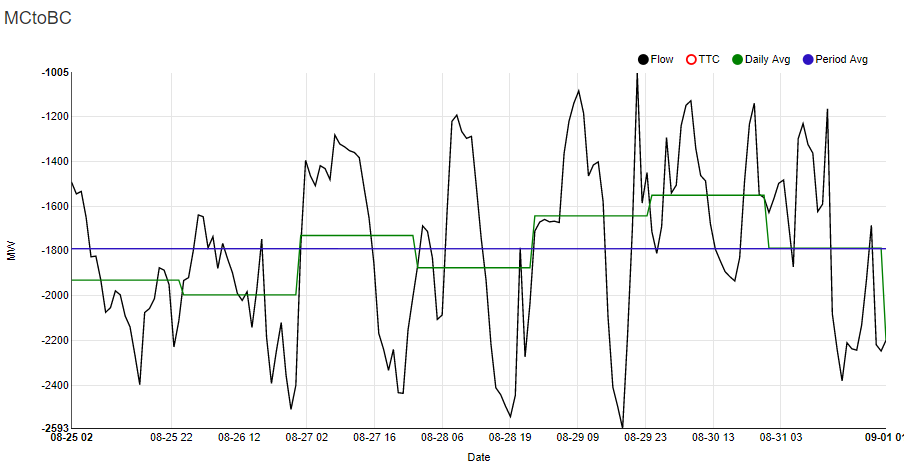 MC-BC on the other hand continued erratic increases and decreases in flows, though everything continued to move south.  Yesterday’s daily average nearly matched the weekly-average of -1,788 (compared to the weekly average of 1,800 MW).