Two consecutive days of increases for the 10-Day NWRFC forecast beginning on the 25th at 8,643 MW and culminating on the 27th with 9,166 MW.  The 25th also marks the first day of the STP falling below the 10-day forecast.  The STP remains below for all but one day through the rest of the month.

Ansergy has updated the Nuke Status report to make it easier to catch new outages, returns, etc.  Shades of red indicated the percent of capacity online, while the previous week is contrasted with equivalent days going back five years.

You can also see Nuke status’ in weekly aggregates going back to 2005. 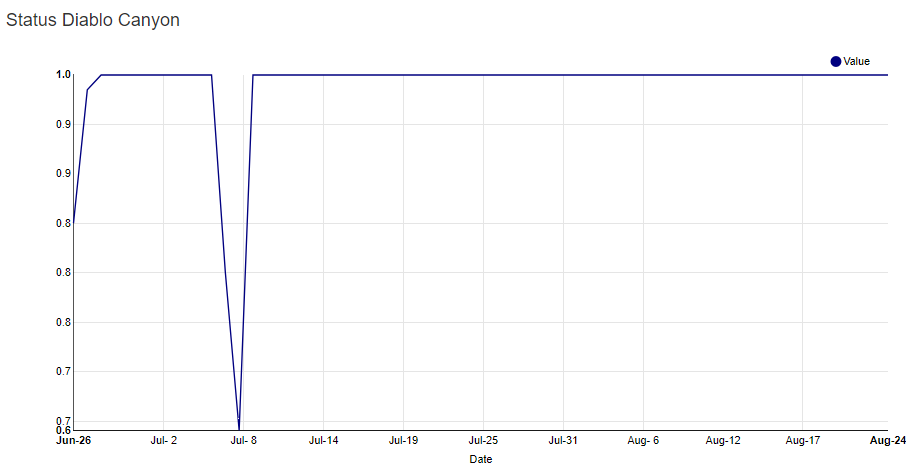 Or a more granular view displaying daily status’ from the previous two months.

Mid-C loads fell a paltry 185 MW week-over-week, but managed to overcome on 2016 by just under 1,000 MW after trailing heavily for more than a week.

Also some interesting changes in demand during the height of the eclipse as loads dropped 150 MW from 10 AM to 11 AM before recovering soon after.

SP-15 loads fell around 1,500 MW yesterday compared to Tuesday’s peak, but remained elevated week-on-week by as much as 1,100 MW.  Yesterday’s daily average pushed above the weekly average for the second consecutive day as well.

The hot Burbank forecast is looking even hotter as every day from the 26th through the 30th was bumped up several degrees.  Burbank can now plan on triple-digit highs for the 27th through the 30th with a peak of 104 on the 28th (16 degrees above normal and a new 10-year high).  Temps will cool down considerably quickly after this warm-up, eventually falling to 84 by the 1st of September.

Summer isn’t ready to die in the Northwest, particularly in Spokane as temps will rise well into the upper 90’s by the beginning of next week before staying 5-10 degrees above normal for the remainder of the forecast.  Until then, there should be one more jaunt below average, but even that is just a couple degrees from normal.

Seattle should reach the mid-80’s early next week as well as the 29th is forecasted with a high of 85, ten degrees above normal.  Leading up to then, the forecasted highs were bumped up at least a couple degrees for each day, especially on the 28th which increased four degrees.

As has been the case all summer, Portland will be close to ten degrees warmer than Seattle through most of its forecast.  Highs are expected to reach into the 90s for each day from the 27th-29th, peaking at 93 on the 28th (15 degrees above normal, and a new 10-year high).

Much milder in NP as highs stay relatively close to normal for the next week 10 days.  There is a hint of a return to 90 degree days by the first week of September as the 5th is currently forecasted at 91.  Sacramento, though slightly warmer, also failed to deviated much from average over the next week.

The return of 110+ highs in Phoenix may not come into fruition as the forecast was scaled back from 111 to 109 for the 26th.  Changes also call for a slightly more rapid drop in daily highs thereafter as temps fall closer to the mean a day earlier than forecasted yesterday.

Gas Demand in Mid-C his increased 160 MMCF from the 21st to the 22nd, enough to again push demand above the annual average. 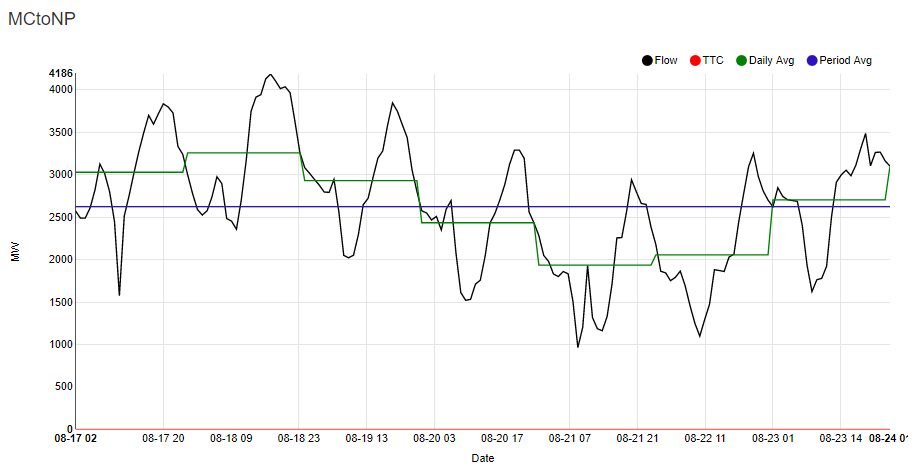 Mid-C to NP saw its daily average increase on consecutive days, a drastic change from the trend over the previous three days.  Flows settled at 2,704 MW, up 650 MW from the average a day before, though it was just slightly above the period average of 2,624 MW.

the MC-BC line remains comfortably south of -1,500 MW, though the daily average came close to breaking that yesterday where it finished at -1,512 MW, partially aided by a high of -884 MW in the late morning hours.