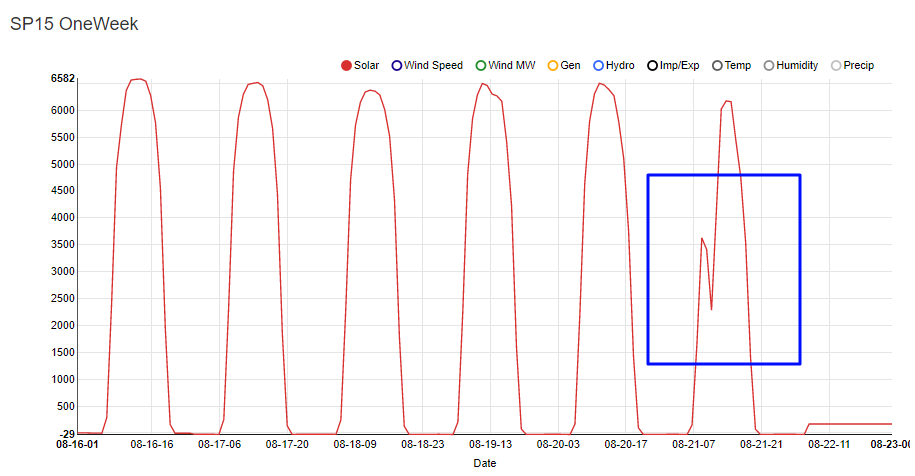 Solar generation peaked at 6,174 MW in SP yesterday representing a decrease of 330 MW.  For anyone curious how much the solar eclipse affected generation in Southern California, the blue box should hold your interest.  From 9 AM to 11 AM generation decreased nearly 33%, or 1,400 MW. 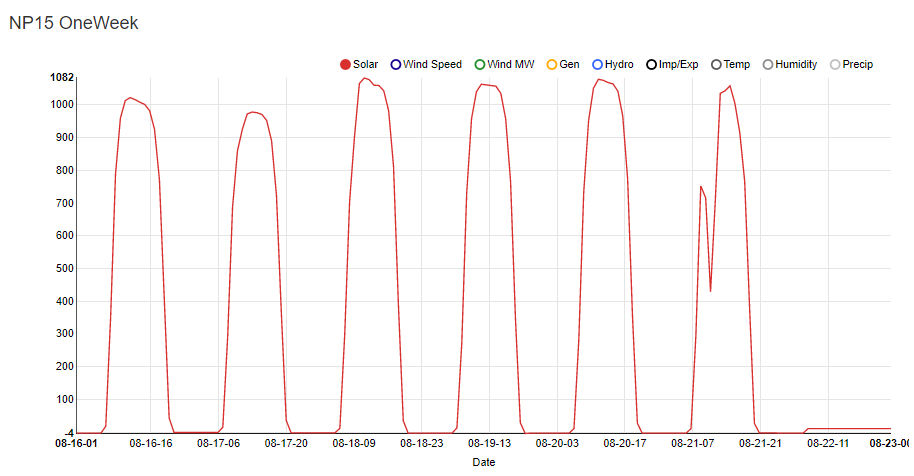 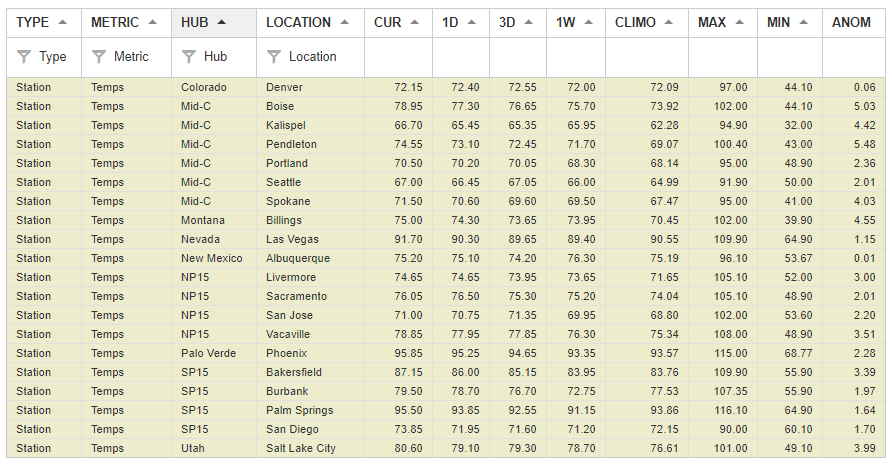 Above average temps across the board for the latest 10-day forecast, especially in Mid-C which leads the way with 4+ degree anomalies, though most of that is concentrated on the east side of the Cascades.  Populated areas of SP-15 and NP-15 push 2 degrees above normal but not much more than that.

Burbank should hit three degrees shy of normal until the 25th which will mark the beginning of the next warm up.  Daily highs could peak at 97 on both the 27th and 28th — both nine degrees above normal.  The 29th was pushed five degrees higher than yesterday’s forecast, but that was more than offset by a cooldown beginning on the 31st.

Huge changes to the forecast in Phoenix beginning on the 30th where the expected massive cooldown was replaced by slightly warmer than normal highs.  Especially on the 4th after pushing 12 degrees higher in today’s forecast.  In the near-future, the 26th is forecasting a high of 110, seven degrees above normal.

Normal daily highs are set to decrease rapidly over the next three weeks — eight degrees in total.  Until then, SLC will have daily highs well into the 90s, particularly from the 26th through the 30th where highs should be nine degrees above normal.

Normal is the name of the game for San Jose where daily highs don’t show much variance from mean until September; just a single day forecasted more than two degrees from normal until then.  The next warm up is tentatively set at the beginning of the month as highs could rise back into the 90s by the 6th (eleven degrees above normal).

Triple digits expected on the 28th were dashed with today’s forecast after plummeting six degrees to a high of 95.  High are still pacing above normal for all but two days to round out August, while September is suggesting an even larger anomaly to begin the month, particularly on the 5th with a high of 101 (12 degrees above normal).

It’s a helter skelter forecast for Portland as highs bounce from 88 today to 74 on Thursday and back to 89 by Sunday.  The 27th-29th could each reach at least nine degrees above normal, and while things will cool off a bit soon after, the rest of the forecast is predominantly above the mean.

Similar chart for Seattle, no surprise.  The high on the 24th is expected to drop into the 60s which would mark the coolest daily high since late June.

Grand Coulee elevation has continued to pace with average for nearly two weeks since diverting from ten-year lows in July. 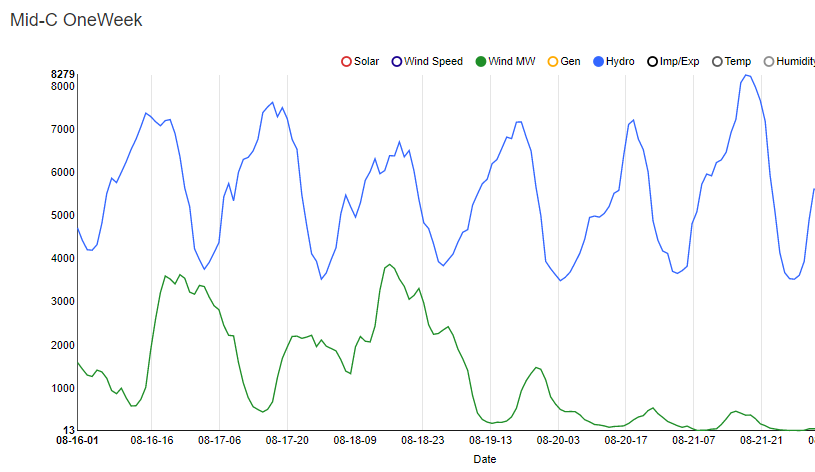 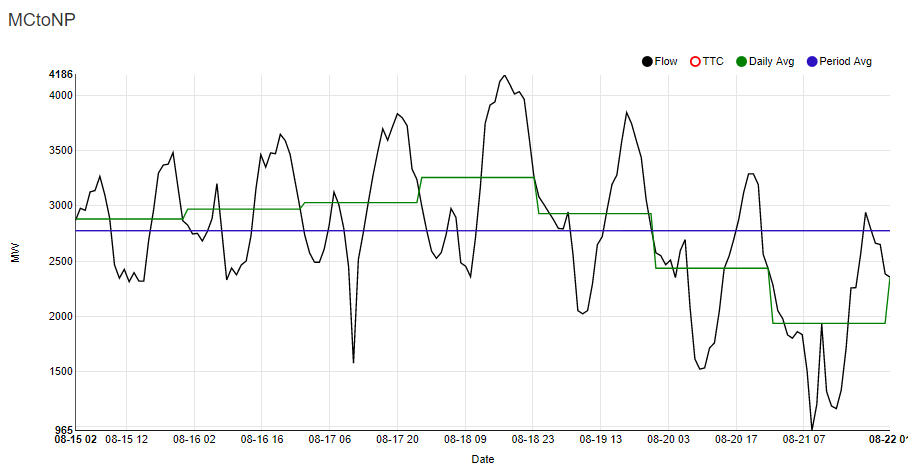 Mid-C to NP exports have plummeted since the 17th as daily averages came off more than 40% to drop to 1,936 MW yesterday.  Hourly flow dropped as low as 965 MW at 9 AM yesterday as well. 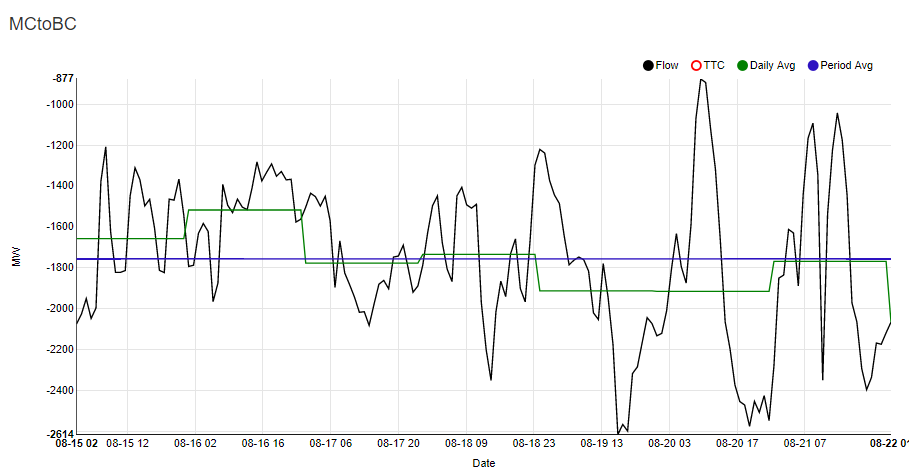 Erratic couple days for the MC-BC line as flow dropped to new weekly lows and shot up to weekly highs all within the same day.  Aggregate the hours together from the weekend and you surprisingly got an almost equal daily average at -1,912 and -1,915 MW from Saturday and Sunday.  The average recovered yesterday to finish at -1,768 W, just a hair shy of the weekly average.