What a difference a week can make.  While loads have crept up slowly since the weekend, Mid-C demand remains down 3,203 MW week-on-week, and fell below last year’s levels as well (1,600 MW).  The daily average also came up 2,000 MW short compared to last week, though it increased 400 MW day-over-day.

SP-15 loads stayed relatively flat with a decrease of just 238 MW, though the year-on-year difference grew to 3,584 MW at its peak yesterday.  The daily average sits 450 MW higher than the two-week average.

Huge increase in demand yesterday as loads peaked at 17,182 MW, 2,200 MW higher than the day before, and enough to nearly close the gap with last year (400 MW shy).  Light load demand also grew day-on-day with an increase of 550 MW.

PV daily average demand fell to its lowest level in the past two weeks at 10,417 MW, down nearly 1,500 MW from one week ago.  While peak loads have fallen off, it’s light load that had the largest impact on the daily average.  Light load demand fell to 7,283 MW in early morning hours yesterday, 900 MW lower than the day before. 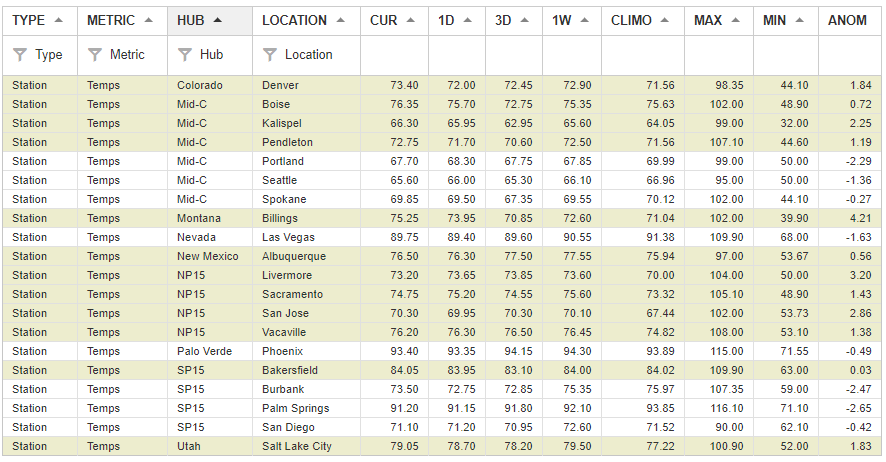 Not much excitement over the next ten days, at least not as an aggregate by station.  Since Tuesday, Mid-C and SP-15 have warmed up slightly, while NP-15 cooled down an equal amount.  Looks like anomalies are out and a deviation to the mean is in.

The beginning of next week is trending warmer than yesterday’s forecast suggested.  Tuesday could peak at 80 for the first time in over a week (by that point), though the warm up may be followed by a nine-degree drop to 71 by Thursday (five degrees below normal).  Worth noting the normal line is set to drop 3 degrees from the 24th to the 7th of September.

No surprise, but similar story in Portland where we could see temps max out at 85 by Tuesday.  It’s too far out to be reliable at this point, but the 30th is showing a high of 90+ degrees preceded by consistent 80-degree days.

Tomorrow could mark the last day above normal for at least a week as San Jose prepares for a moderate cool down.  Daily highs may dip as low as 74 by the 24th, eight degrees below normal.

Phoenix breaks the norm and should see consistent above-normal highs for at least the next couple weeks.  In a change from yesterday’s forecast, the 21st was increased five degrees.

After consistently generating more than forecasted for the previous week, the 15th marked the first day actuals were surpassed in SP-15 (falling 400 MW short).

Mid-C wind generation also fell short of forecasts as the bottom fell out completely on the 15th at just 8 MW mid-day.  Contrast that with the peak of 4,139 MW late on the 12th. 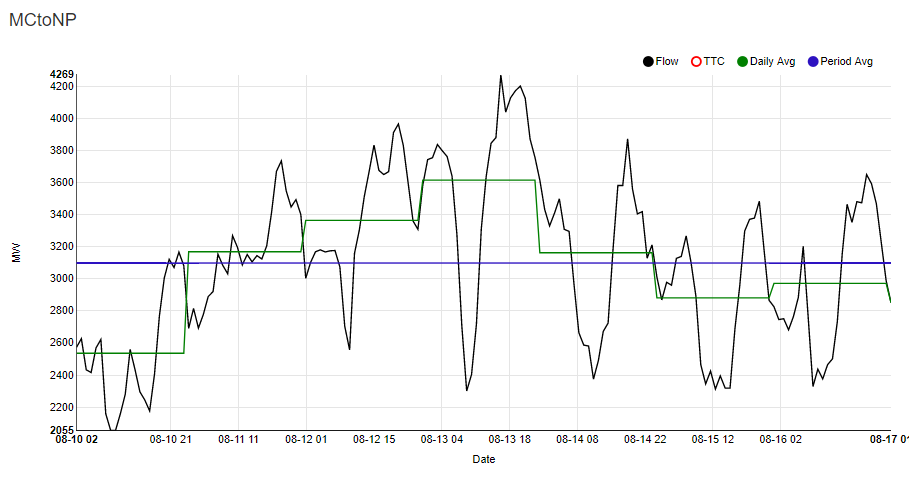 Mid-C to NP daily average increased 90 MW (2,971 MW) marking the end of a large slide from a high of 3,614 MW on the 13th.  Despite peak flows declining compared to earlier in the week, each day has seen a similar trough, generally around 2,400 MW. 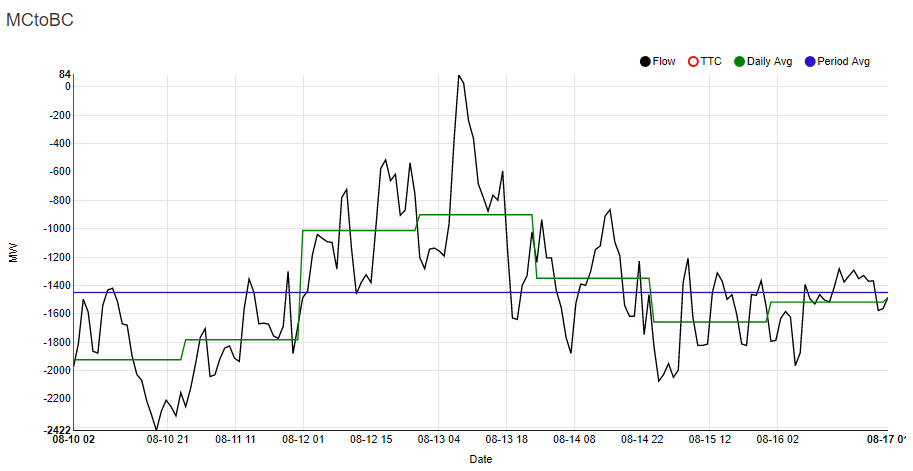 The line’s brief jaunt into positive territory was proved to be short lived as it hasn’t risen above -861 MW since the 13th while the daily average has dropped 600 MW in the same span of time.