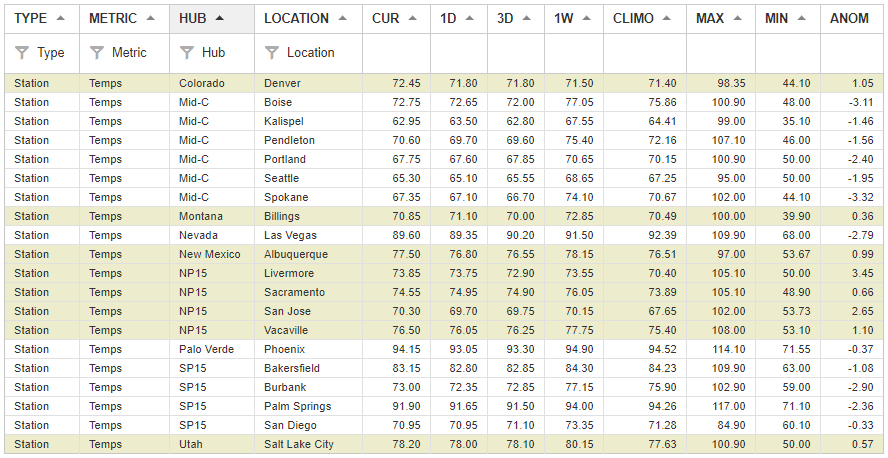 There are clear separations in 10-day forecasts across the West as Mid-C and SP-15 trend cool while NP-15 and the Rocky Mountain hubs trend warm.  Burbank stand out with the coolest average temp forecast, which looks to extend further inland as Palm Springs expects more than a two degree cooling anomaly as well.

Much of Burbank’s cooler than normal forecast is coming in on the front-end, specifically over the next three days.  Today should finish with a high of 75 — 13-degrees below normal.  Cool temps should persist as above-normal highs aren’t expected until the 24th, with nothing above 90 degrees until then.

Phoenix should continue its summer with a fairly normal forecast as daily highs aren’t predicted to deviate from normal by more than four degrees throughout the remainder of the month and into the first week of September.  The latter part of this week is trending warmer than forecasted yesterday however, as the 18th is now showing temps two degrees warmer.

San Jose is listed as one of the NP stations with warmer than normal average temps over the next 10 days, but you wouldn’t know that based on its forecasted daily highs as San Jose is expected to break normal just once over the next week.

The forecasted daily lows for San Jose tell a different story.  Lows are predicted to drop below normal just once over the next three weeks — peaking at five degrees above normal on the 18th.  While daily highs aren’t much to write home about, the daily lows are enough to offset net decreases to the average daily temp.

Sacramento will peak above 90 for three consecutive days beginning on the 18th, ultimately leading to a high of 93 by the 19th.  The larger story is the rapid cool-down with the introduction of next week as daily highs plummet to 7 degrees below normal.  Keep an eye on the two warm trends showing up on the 23rd and 28th as well — the latter could break triple digits.

Portland had several slight changes applied to its three week forecast, though the trend remains relatively normal as we don’t see any significant anomalies until the latter part of next week.  Temps should reach into the 80s on a majority of the days until then.

Seattle should be considerably cooler than Portland — that’s no surprise, but it’s also going to be almost entirely cooler than normal as well as the forecast doesn’t call for Seattle to break the normal line until mid-way through next week.

Denver is forecasted to drop 12 degrees below normal tomorrow as the daily high will reach just 75 degrees — two degrees cooler than yesterday’s forecast.  Things continue to be erratic as highs bounce back into the mid-90s by the 21st.

Grand Coulee deviated from setting a 10-year low on the 6th and has managed to push back above average for the first time since late July as yesterday finished at 90% capacity.

The actual elevation derivative of the chart above shows a deviation from average by as much as five feet early this month, while yesterday finished half a foot above normal.

After peaking at 4,396 MW on the 2nd, gas outages have managed to drop to 2,094 as of yesterday, a 52% reduction.  Hydro, on the other hand, saw outages increase 170 MW over the weekend joining wind (70 MW) as the only other source to see increased outages. 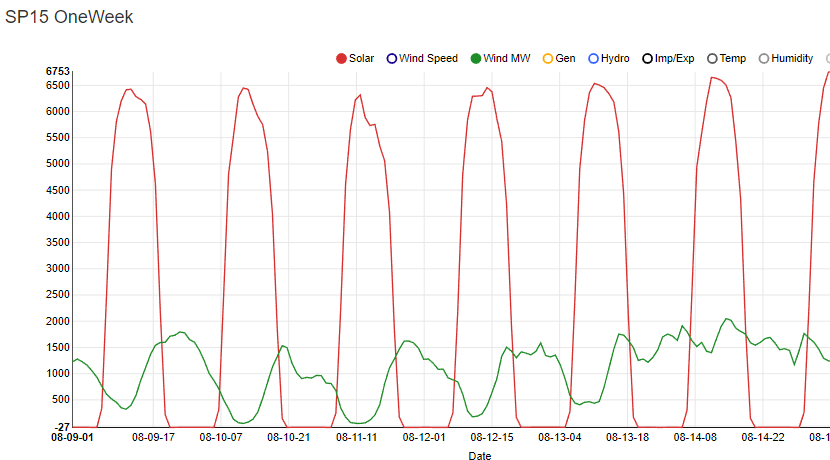 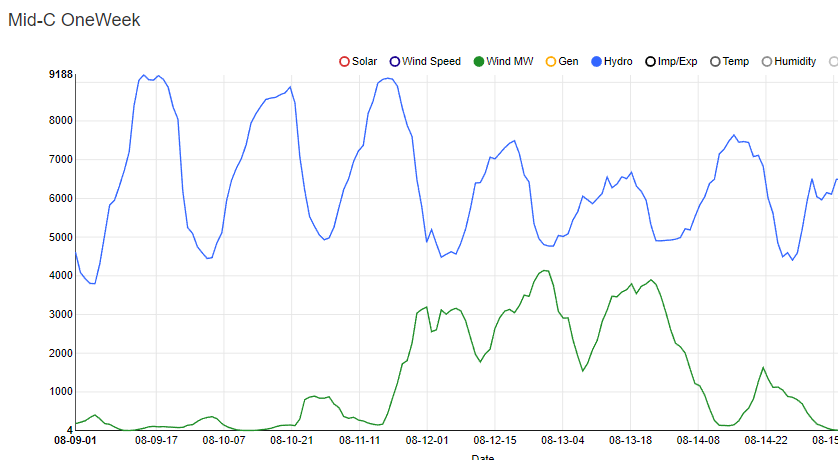 Mid-C wind generated heavily through the weekend as the area’s warm front finally left and a new system moved in.  Wind peaked early on Sunday at 4,139 MW, and nearly matched the output again later that afternoon.  Yesterday marked a much calmer day with a high of just 1,630 MW. 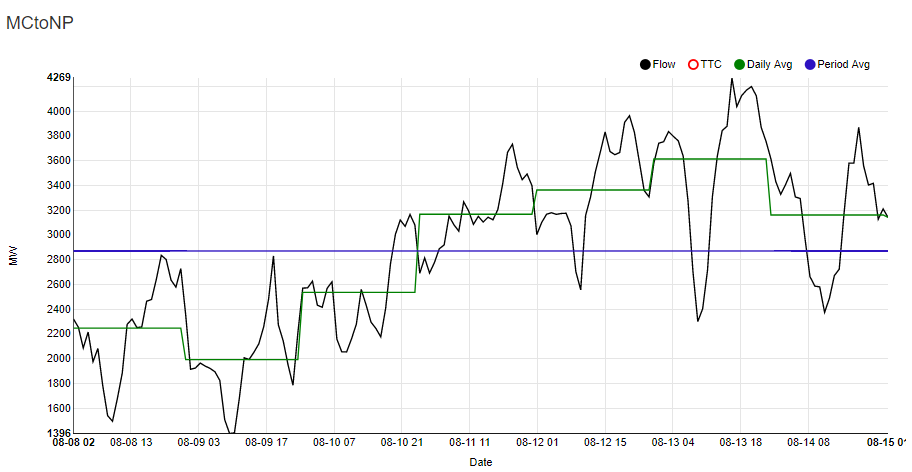 Flow has been steadily climbing since the 8th, though yesterday marked the first day of average-flow decline after finishing at 3,162 MW (down from 3,614 MW the day before).  The weekend brought erratic swings in flows as well, swinging nearly 2,000 MW in the span of 7 hours. 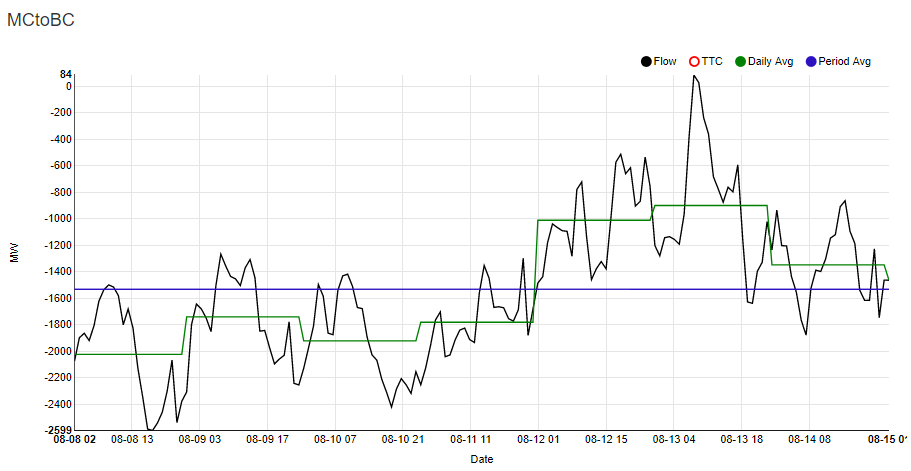 Flow moved into BC from Mid-C mid-morning of the 13th (with a whopping 84 MW).  This managed to push the average daily flow to -912 MW, the highest average of the past seven days.  Flow sunk further south yesterday however, as average flow decreased 450 MW.