It’s August and about the only thing you should care about is the temperature in the load centers. Those are hot:

Portland posted its hottest day of the year yesterday, but the next two days will be almost ten degrees warmer. Burbank bagged a hundred, but that’s about all she’s got. Vegas continues warmer than Phoenix, but we see a rally in Palo.

The latest Phoenix forecasts are several degrees warmer than yesterday’s, while LV drops. Not saying this is stupid bullish for Palo, but we are saying the outlook is better today than earlier in the week.

There isn’t much volatility in the Cal forecasts, all cities are above normal this week, and they all drop next week. The northern portion of the state is posting higher anomalies next week, than this, but loads will fall.

The Northwest’s descent to normals will be slower and the next two days will set records along the I-5 corridor. Portland will not just set records; it will blow those out of the water:

Forecasting demand, when it is this hot, is always a challenge since the skiff is sailing in unchartered waters. But you don’t need to forecast anything, just know Portland General (and BPA) have not served loads in an event like this and with the yuppification of the region, you can be sure there are more AC’s today than five years ago.

All of which means cash is bullish and will be putting upward pressure on term markets which typically sets up some good fade opportunities. Let’s examine cash: 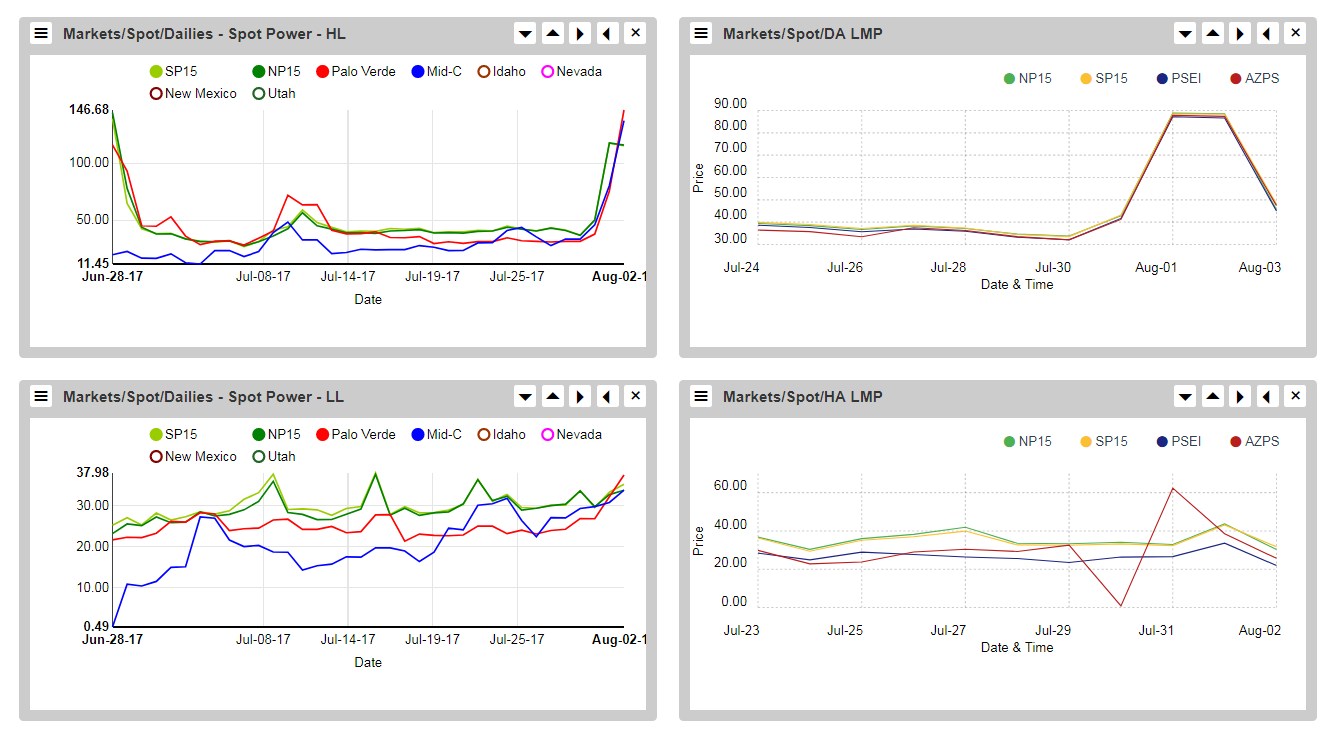 The off peak has barely moved while the on has soared (yesterday). With a slight cooling in California and a rally in the Northwest, we’d expect cash spreads to tighten, though there wasn’t much separation, to begin with. Also interesting, the DA market’s settled materially higher than did the HA, and without congestion.

However, before we go into the term, let’s take a quick look at what Mr. Market has done to the front over the last couple of days. 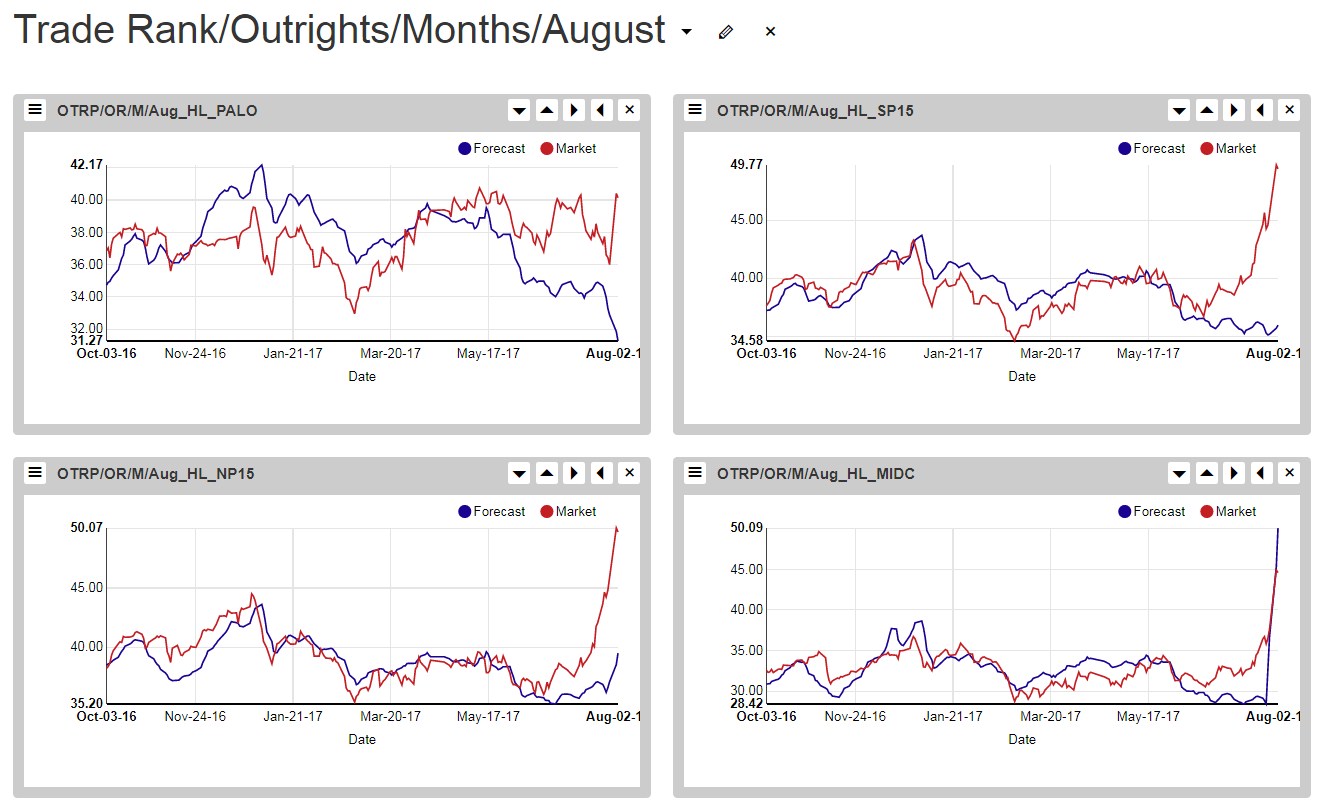 All hubs are up, as they well should be, the question is, are they up too high? We’d be leaning towards a “YES” on that question, but we still haven’t seen real-time trade the PDX 105s and as such would be reluctant to sell BOM length this morning, at least at MidC. 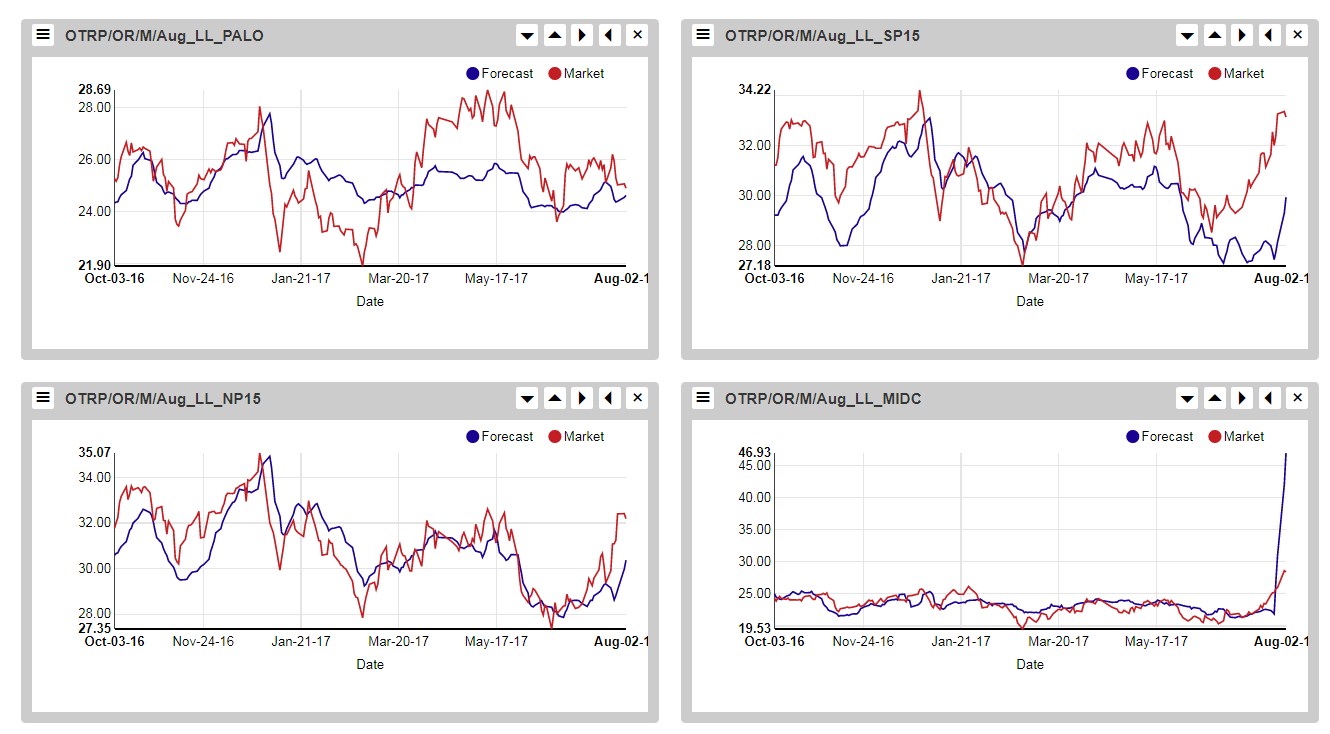 All but Palo are moving up, but not as fast as HL and hence the On|Off is blowing out. Not surprised, and would expect that to rally some more as we work through the next couple of days. 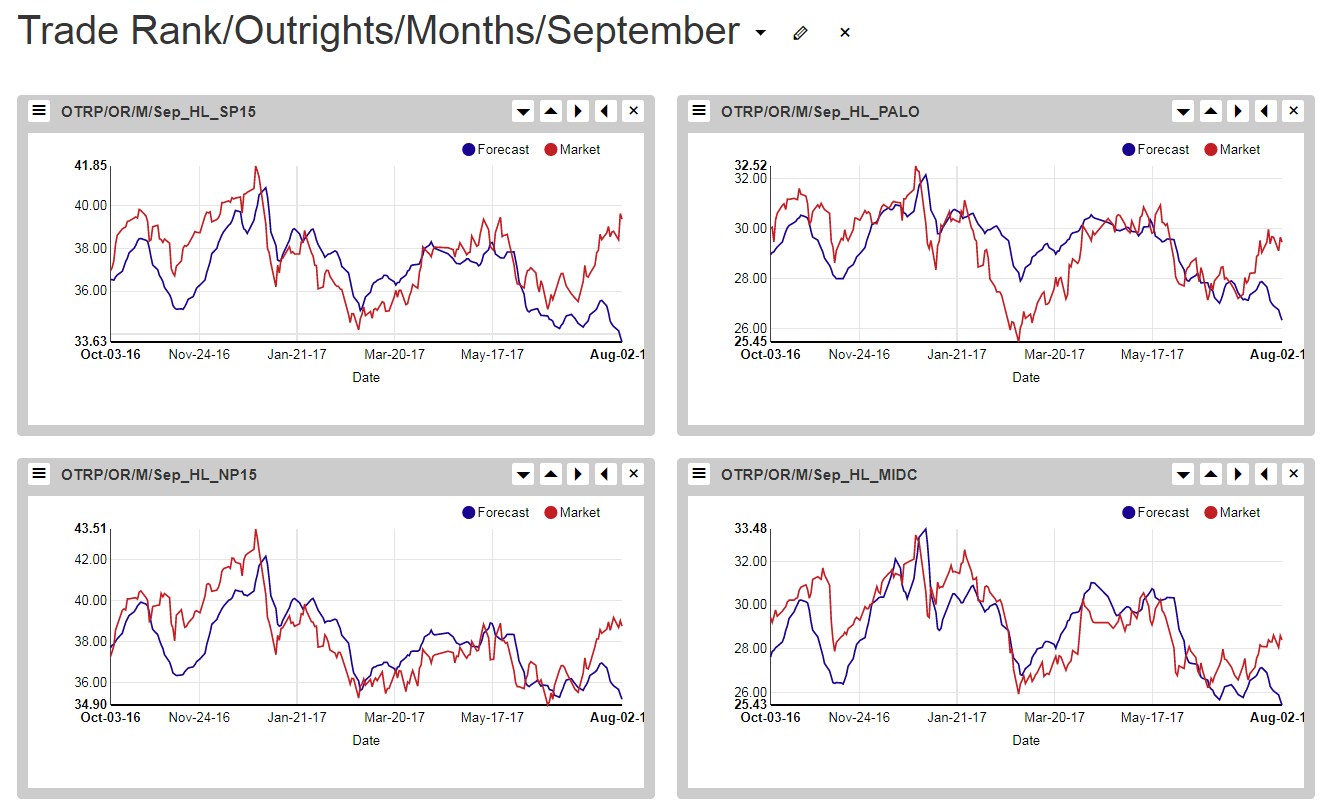 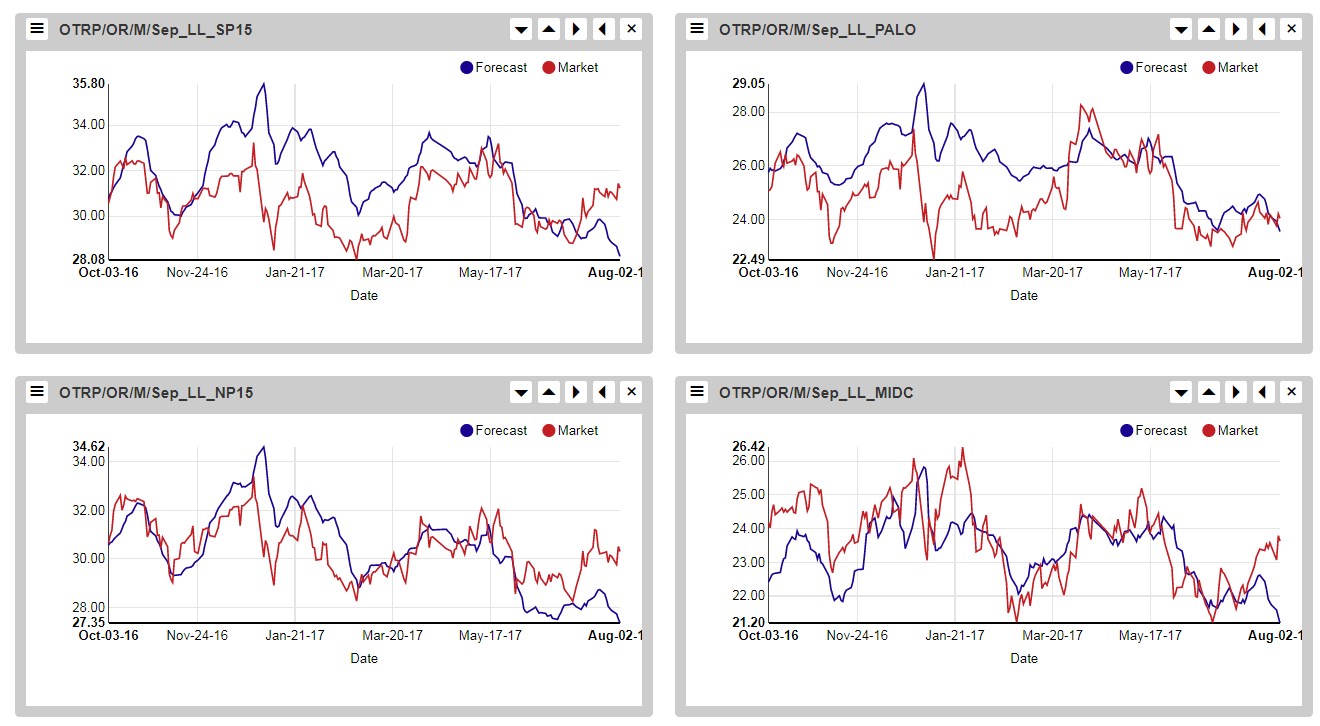 Some HL rally in prompt, but the roll is crashing; less so in the off peak.  Our fingers are twitching, we have a net long BOM book but will hold off and take another day to cash.

The top outright Q trade, per APT, is shorting the Q3 18 Palo on peak: 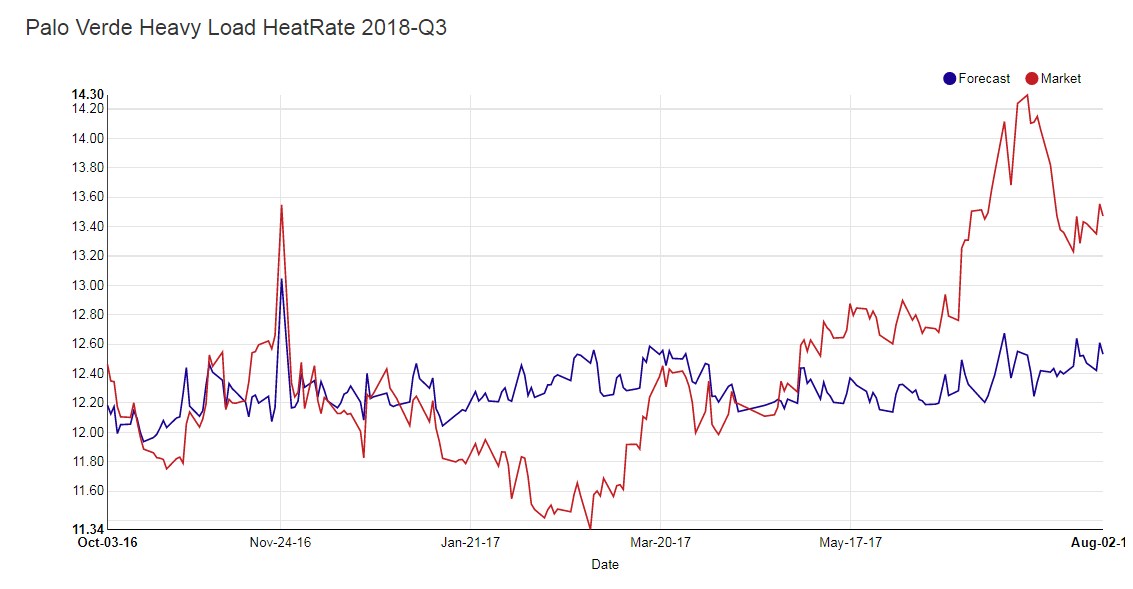 It was a better short a month ago, after the cash crazy days of last June and early July, but the product remains above 90% of the traded days going back to Sep 2016. Given all the front end length we’ve piled on, a short somewhere is a good thing, and we’ll put it on here:

If you are looking to buy a Q, the top long, today, is the Q4 18 MidC HL, but we don’t know why you’d be buying the back when the front is so bullish. And, we’d prefer buying when cash is cheap. 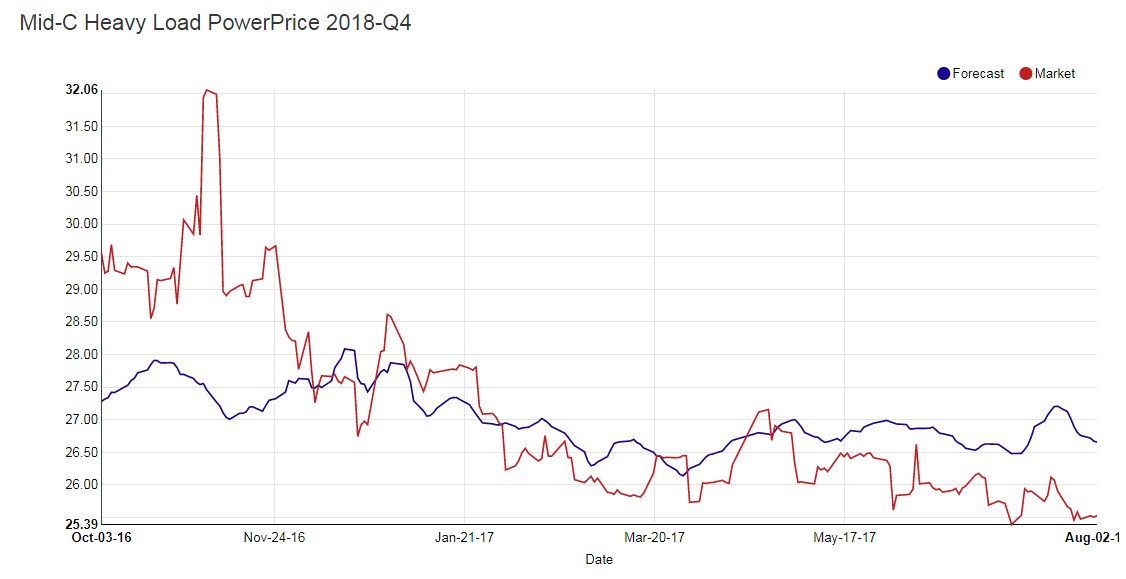 The Q has been on a 10-month bear slide, but we’ll pass on this opportunity.

The top trade in any derivative is shorting the Q4 NP-MidC, let’s take a look: 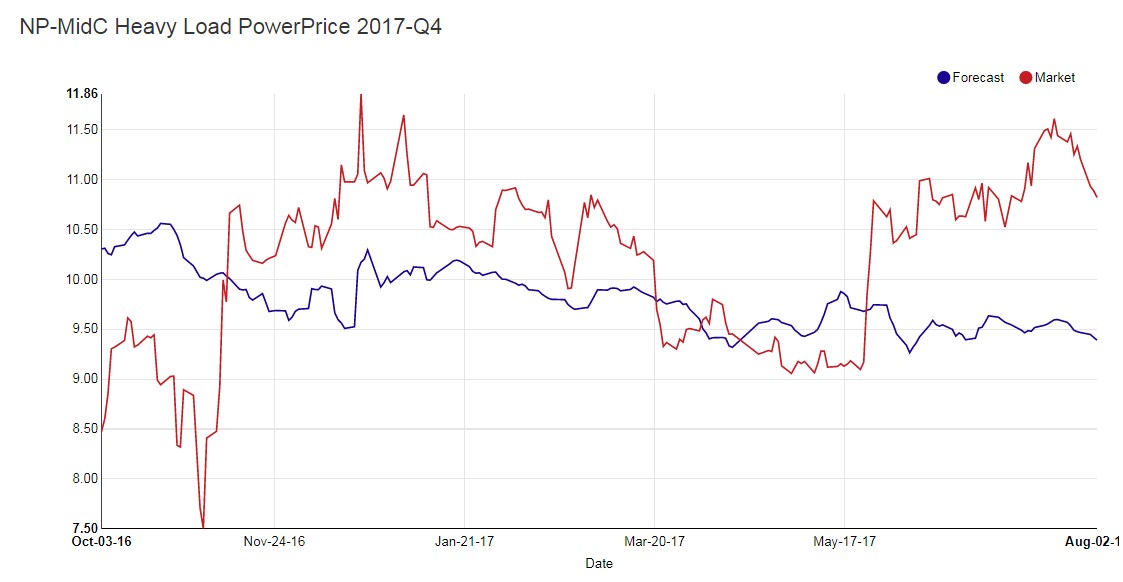 California will have a nastier water hangover in Q4 than will the MidC, so fundamentally the spread should be tightening, not widening. Most likely the market remembers the ten inches of precip the Northwest received in the last ten days of October 2016 and is expecting that again – wrong! We do like this trade because we like what cash will do the next couple of days. As NP cools the MidC warms, and the impact of drafting to serve loads will be felt the rest of the BOM (in the Northwest). 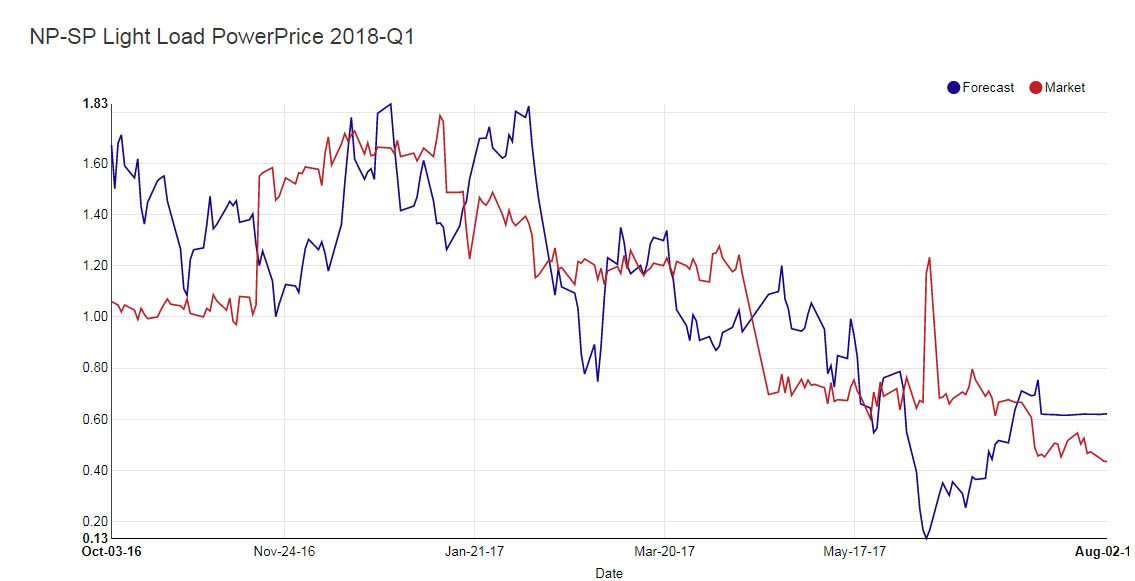 The chart looks great until you note the Y axis … a $1.20 move over ten months. Talk about paint drying, though this would be a good trade for Junior Trader to put on so he can swagger through the hallways with his “Q” position. We’ll pass. 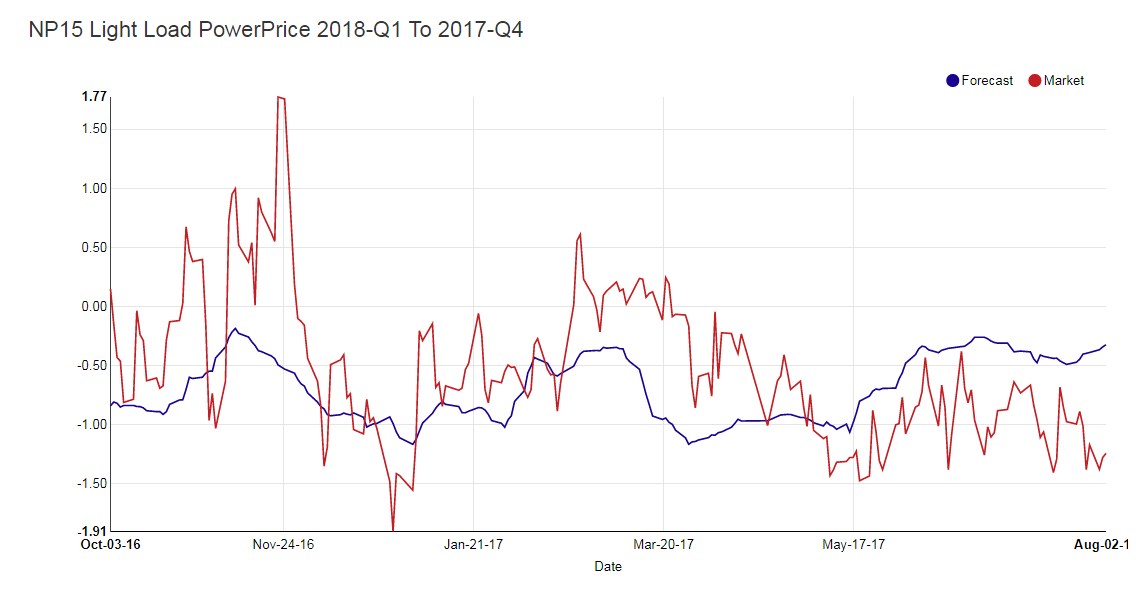 Cheap, at a contract low, but the total volatility is not really significant, about $2.00 if you toss out the Nov 16 blunders. Still, a safe place to put on something if you want to look busy. We don’t care and will pass. 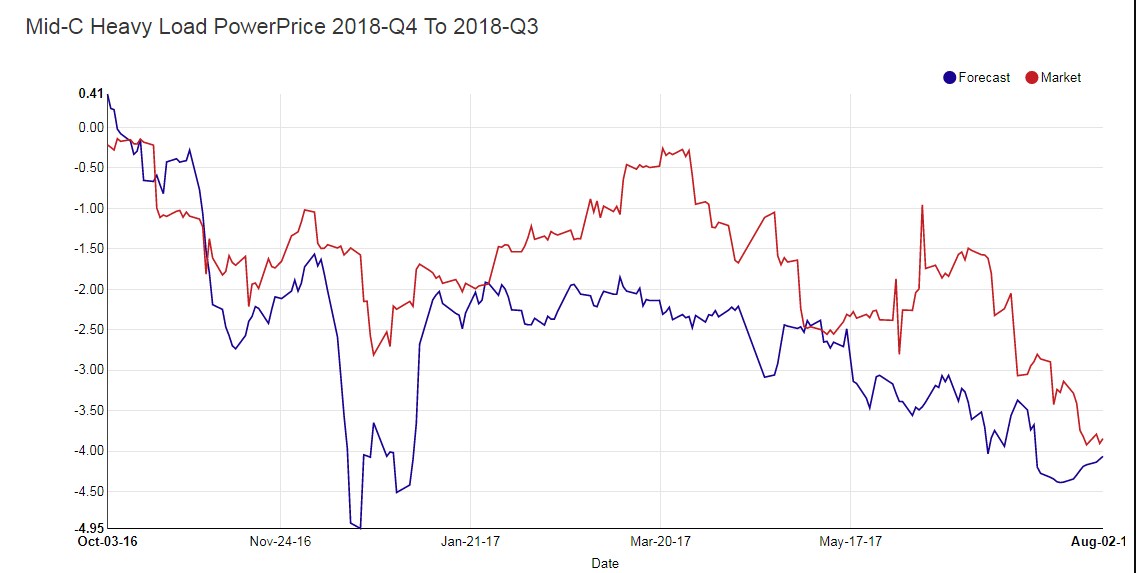 Next on the list, the Q418|Q318 MidC HL. This one is trading at a contract low; we suspect that is driven by the recent MidC cash frenzy and actually like the trade from the Buy side. The market is still haunted by the big and early water of 2016 and fears this current MidC heat wave. That too shall pass, and we’d expect the market to correct back to a -2 to -3 range over the next several weeks.

There are many more out there, grab the APT and filter away. For us, that’s all folks. Still working on presenting an MTM and Position Report for these APT trades, maybe next week.