We’ll start off by checking on the final July degree day numbers, and right off the bat you can see that Mid-C stands out with generally lower than normal degree days (though with the average already so low, the nominal difference is less pronounced).  On the flip side of the coin, San Diego saw its degree days increase by just over 2, while San Jose and Sacramento also had increases of more than 25%.

With Mid-C heat watch well under way, let’s start off with highlighting any changes in Seattle’s forecast.  Thursday is now expected to mark the peak of the heat wave, as opposed to Friday in yesterday’s forecast.  At 95 degrees, Seattle would be 18 degrees above normal, and obliterate the previous 10-year high by 7 degrees.  It also looks like the heat will linger a couple days longer as the area should now stay above 85 through the 7th.

Less changes for Portland on the front-end of the forecast, just a degree difference for 2nd and 3rd.  At 105 degrees, each day will top out at 26 degrees above normal, and the 3rd should beat the 10-year high by up to 16 degrees.  Outside of the record heat, Portland will remain hot until the 10th, and should top out on the 9th in the low 90s.

This is one of those rare times when Portland gets a significantly hotter than Spokane, as the peak of this warm up looks like it may reach 100 but stop there.  Spokane’s forecast will crest on the 4th, a day after Seattle and Portland, and the days leading up to that have been re-forecasted a couple degrees cooler than yesterday.  At 100 degrees, the 4th would mark 13 degrees above normal, and five degrees above the previous 10-year high.

While much of the focus is on Mid-C, Burbank is in the midst of its own heat spell as each of the next five days should be comfortably in the 90s, with a peak of 96 degrees on the 4th.  The cool-down expected from the 7th to the 11th was adjusted several degrees warmer.

Phoenix on the other hand is forecasting below normal through most of the forecast, but especially so tomorrow when the high is expected to dip to 96 — five degrees lower than forecasted yesterday, and nine degrees below normal.

San Jose is expected to reach into the 90’s multiple times this week, and could peak at 92 degrees on the 4th.  This high would put San Jose 10 degrees above normal, and aside from the 13th, marks the last 90 degree day forecasted in August.

If San Jose is hot, you know Sacramento is as well.  Their forecast peaks today at 103 degrees – 11 degrees above normal, though still shy of a 10-year high.  From there, things level out a bit with highs mostly in the upper 90s, though still well above normal.  There is potential for a second heat wave in mid-August as another triple digit high is forecasted on the 13th.

SP-15 loads rebounded 2,338 MW from the weekend, and equated to a 3,501 MW increase week-over-week.  Yesterday also coincided with last year’s dramatic drop in demand, ultimately leading to a year-on-year difference of 211 MW, the first time 2017 has showed higher demand in nearly two weeks.

PV loads also rallied coming off the weekend as yesterday peaked at 15,529 MW — equivalent to a 4,000 MW week-over-week increase, and a 1,125 annual increase.  This also pushed the daily average to its highest level since the 27th, and the second-highest point in the past two weeks.

As Mid-C gears up for impending doom, loads are already starting to take shape after yesterday’s demand reached 25,170 MW, easily the highest point in the past two weeks.  Demand was up 1,356 MW week-over-week, and up 3,755 MW year-over-year.

The sharp cuts to yesterday’s STP forecast are showing up in this graph, though STP remains elevated above the 10-Day for all days aside from the 4th.  The 10-Day forecast calls for a high of 12,344 on the 12th before more drastic cuts to round out the forecast. 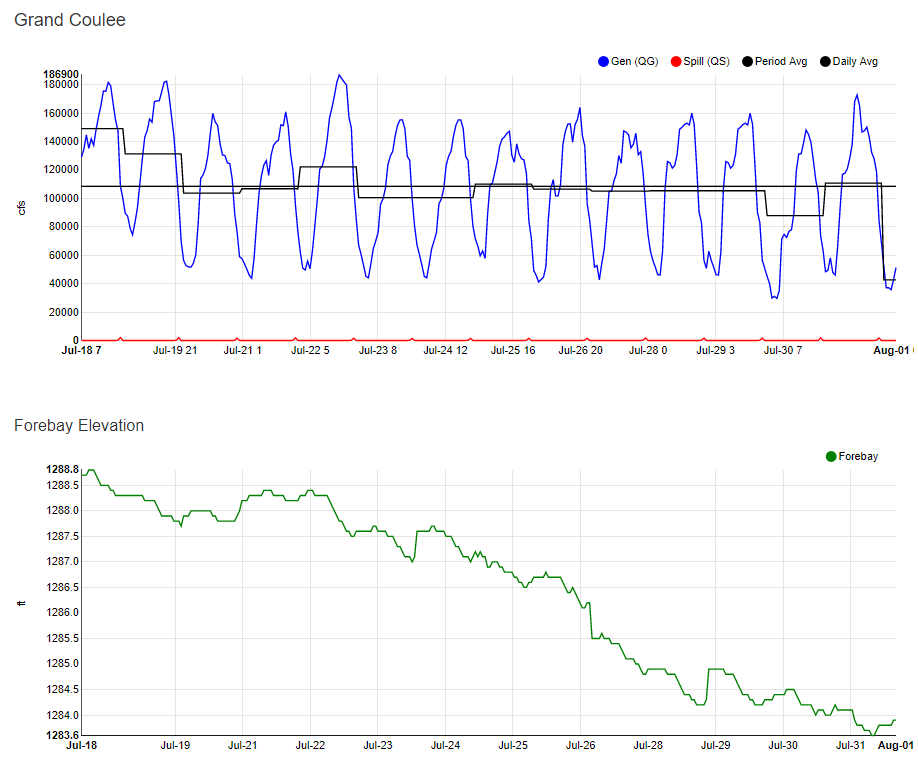 Grand Coulee generation has remained relatively steady, mostly hugging the 10-day average of 108,517 CFS, though the daily average on the 30th dipped down to 87,908 CFS.  The reservoir elevation has dropped just over five feet since the 18th.

The uptick in Mid-C gas demand the last few days has pushed the hub back to the annual-average for the first time since March. 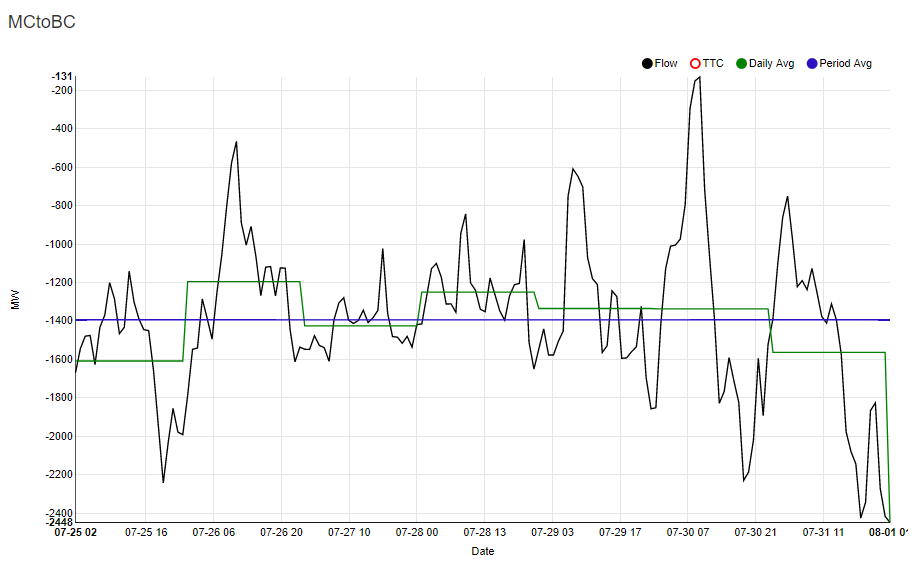 Flows moved south heavily last night / early this morning having dropped below -2,400 MW twice over that span of time.  This is a sharp change compared to the 30th which peaked at -131 MW at 10 AM, the closest to neutral the line has been in well over a week. 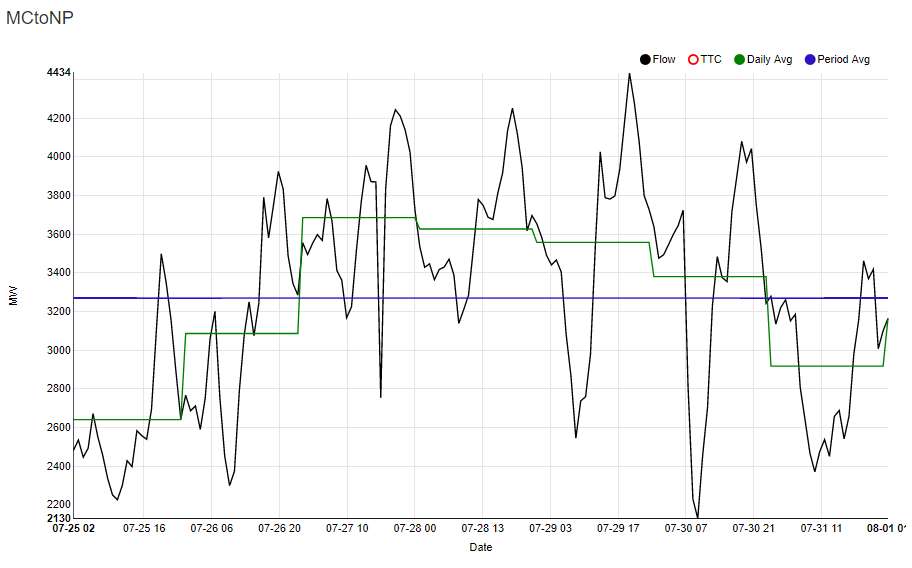 Flows plummeted yesterday as the daily average dropped to 2,918 MW, more than 400 MW lower than the day before.  Flows peaked at 3,463 MW yesterday, falling well short of the 4,000+ MW highs we had seen in each of the previous four days.