Mid-C demand bounced back yesterday by finishing 1,363 MW higher week-on-week, and as much as 1,732 MW higher year-on-year.  This was enough to push the daily average well above the two-week average — ultimately amounting in the largest daily average (19,723) in the past two weeks.

NP demand has rebounded some from its elevated levels from earlier this month, but still remains largely down week-on-week (2,153 MW as of yesterday’s peak).  Despite the peak showing recovery, the daily average continues to fall, now 700 MW below the two-week average.  The difference in annual demand was just 180 MW during yesterday’s peak load. 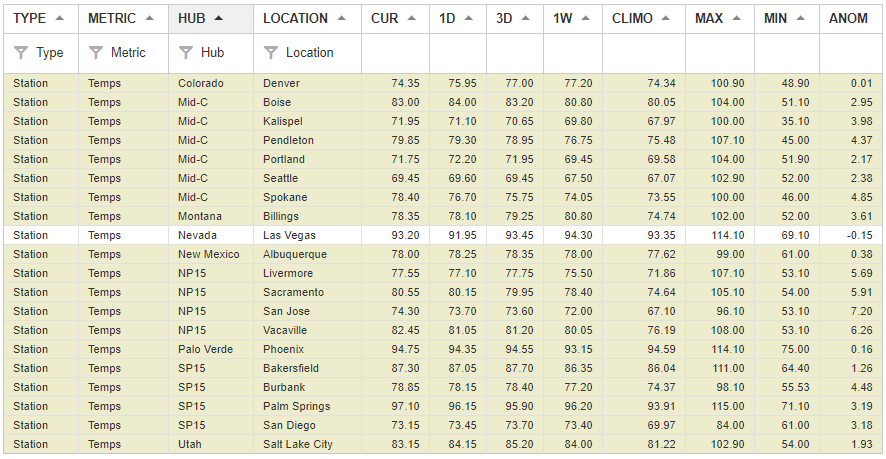 As long as you aren’t in Las Vegas, you should be anticipating warmer than normal average-temps over the next 10 days, though even Vegas is projecting just 0.15 degrees less than normal.  NP-15 stands out as the warmest hub as an aggregate, particularly with San Jose’s +7.20 forecast anomaly.

The chart backs up the table from above as San Jose is a couple days away from consistently above-normal daily highs.  The 30th and 31st mark the high point over the next week at 89, though the 3rd is currently forecasted at 90 — potentially 8 degrees above normal.

Sacramento’s forecast is still holding well above normal, but the end of this week has been scaled back a bit from what was shown yesterday as both the 30th and 31st are projected three degrees cooler.  This drawback in the forecast also prevents triple digits, at least until the 3rd which is forecasted at 101.  Regardless, Sacramento should get daily highs around 6 degrees above normal beginning on Thursday and extending into the first week of August.

Southern California is also warmer than normal, but doesn’t quite reach 7+ degree anomaly that we are seeing in NP.  Burbank will peak at 92 on both the 27th and 28th, five degrees above normal for both, before falling back into the high 80s to finish out the month.

Phoenix showed just a couple tenths of a degree above normal in the 10-day average temp forecast, and looking at the forecasted highs over the next three weeks, you can see why.  The daily high should alternate above and below the normal line through August 7th, peaking at 108 on the 2nd (three degrees above normal), and dipping down to 101 on the 29th (four degrees below normal).  The second week of August is beginning to shape up to be much cooler than normal.

Portland is forecasting its patented 6 degrees above Seattle weather, though there may not be any below-normal highs until well into August.  Today marks the highest day in the three-week forecast at 90 degrees, 10 degrees above normal.

Denver’s highs are forecasted well below normal through the rest of the month, but you might not have noticed that by just looking at the average temp table.

That’s because the daily lows are forecasted consistently above normal, essentially creating a net-neutral result.

Reductions to STP are seen in the 10-Day Forecast report as well, especially as it moved into August, and particularly when compared to the forecast from four and five days ago.  The NRFC 10-Day is set to drop more than 1,750 MW from the 25th to the 2nd.

Libby has finally slowed its fill after becoming one of the last to continue raising its elevation.  Dworshak dropped a foot intraday and has decreased more than 6.5 feet week-on-week.

Total ISO gas outages dropped close to 480 MW since last week’s high on the 20th, and now are 3,100 MW lower than they were in mid-June.  At the same time, Hydro outages increased 90 MW, while Wind recovered 50 MW. 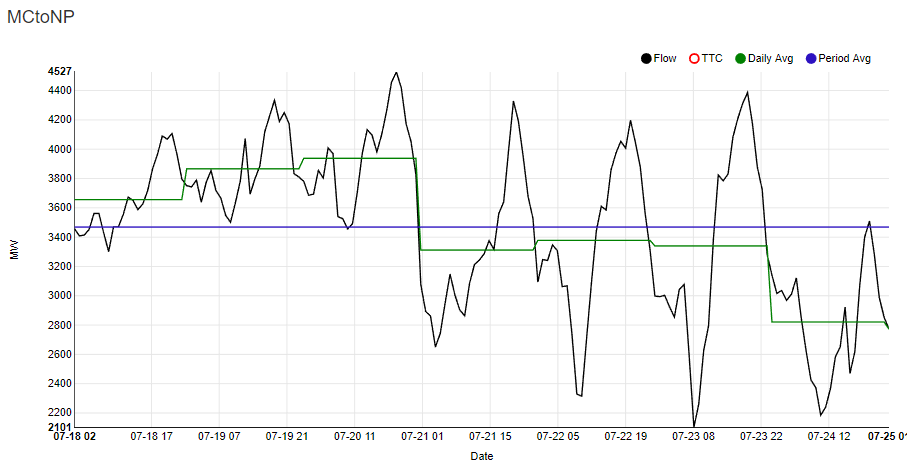 MC-NP average daily flows plummeted to 2,821 MW yesterday, down from 3,340 MW on Sunday.  The drop can be partially attributed to the lack of a heavy load peak in flows that we had seen over the previous week coupled with a steep drop in late morning flow.  Flows reached above the two-week average for just one hour yesterday. 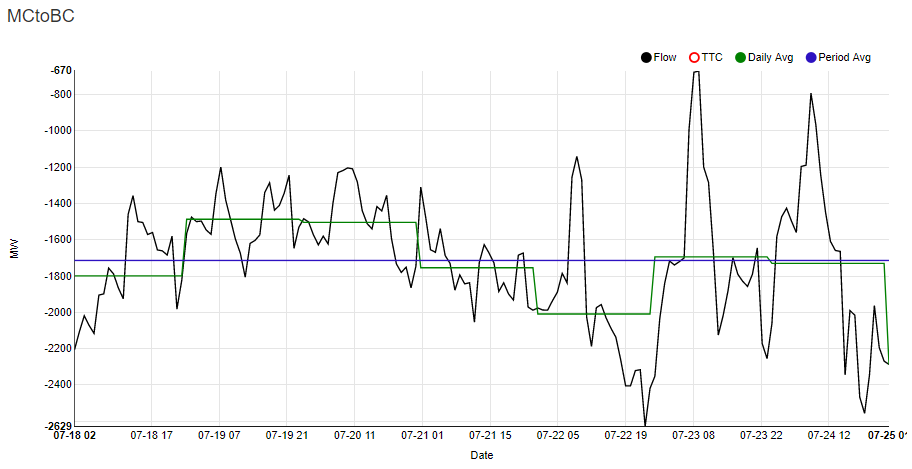 Mid-C continues heavy imports from BC, though the past two days have shown quick declines in flow during mid-morning hours before increasing imports by the afternoon.  This has left the daily average in line with the two-week average despite a wide range of hourly flows.