Not a lot of day-to-day movement, as you’d expect for late July, though Chief Joe added just under three feet, while Dworshak lost the same amount.  Week-on-week we also see Duncan and Mica with added elevation of at least two feet.

Dworshak has been pacing well above average for over a month now, and at its highest in late-June, the reservoir managed to hit 10-year max elevations.  It remains two percentage points above the average as of today.

Very minimal day-to-day changes to the NWRFC 10-Day forecast, and as an aggregate, we see overall changes slow down considerably as we move to the end of the month.  For example, from the 19th to the 20th, the RFC calls for a drop of 360 MW, while the 27th to the 28th amounts to just 88 MW.  The STP remains forecasted well above the 10-day.

Mid-C loads are down 1,717 MW week-over-week as the hub continues to mire in mild summer weather.  Year-on-year demand remains up by as much as 1,883 MW as of yesterday’s peak.  The difference is light load isn’t as pronounced — just 800 MW yesterday.

SP-15 loads bounced back after a reduction in demand on Tuesday by increasing 774 MW day-on-day, also putting the day above last week, though just by 24 MW.  Demand still pales in comparison to what we saw two weeks ago as the daily average falls 1,400 MW short of the 7th of July.

Meanwhile PV loads remain well below last week, short 1,761 MW yesterday, this also marked a year-on-year decrease of 1,265 MW.  Yesterday had a daily average demand of 11,163 MW compared to the two-week average of 12,629.  Falling temps are showing their effect on PV loads.

Yesterday marked the second consecutive day of decreased loads, amounting to a drop of 2,452 MW in demand since Monday.  However, demand remains elevated compared to last year by as much as 1,700 MW.

Las Vegas’ forecast was increased for early next week as the 25th was bumped up 8 degrees compared to yesterday’s forecast.  Temps are expected to stay elevated through the month.

Phoenix also had an increase to its forecast moving into next week as the 23rd was bumped up 7 degrees with today’s update. This basically amounts to a return to normal however, as yesterday’s forecast called for 6 degrees below climo compared to one degree above for today’s.  Other than a blip on the 1st of August, the rest of the forecast is mostly below normal.

Moving into Southern California we see an updated forecast with mostly cooler temps through the end of next week before finally reaching into the mid-90s with a high of 95 by the 29th.  At 7 degrees above normal, this could be the largest anomaly in weeks.

Of course, instead of guessing the last day Burbank had a significant deviation from normal, pull up the Weather Actuals report and look up the exact figures.  July 8th reached 102, nearly 18 degrees above normal for that date.

San Jose is finally starting to forecast consistent above-normal temps, though nothing approaching triple-digits.  The 23rd marks seven degrees above normal, the highest anomaly through the rest of the month.  The beginning of August also shows potential as the 2nd is forecasting a high of 92 – ten degrees above normal.

We’ll see a similar warm up in Seattle over the weekend as well as the 22nd through the 26th could reach 80 degrees, putting all days north of four degrees above normal.

Safe to say when Seattle is hitting 80, you can count on Portland to push 90, which it should do on the 22nd with a forecast currently calling for 89 degrees (nine above normal).  Other than a brief drop on the 26th, the rest of July is forecasting above normal for the Portland area. 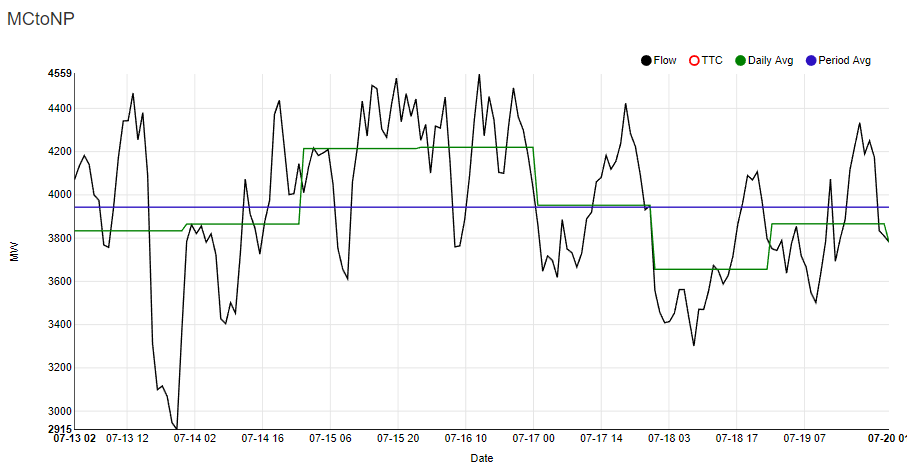 MC-NP flow bounced back yesterday after two consecutive days of reductions.  Yesterday finished with a daily average of 3,866, up from 3,656 on the 18th, though the line remains below the weekly average of 3,943 MW. 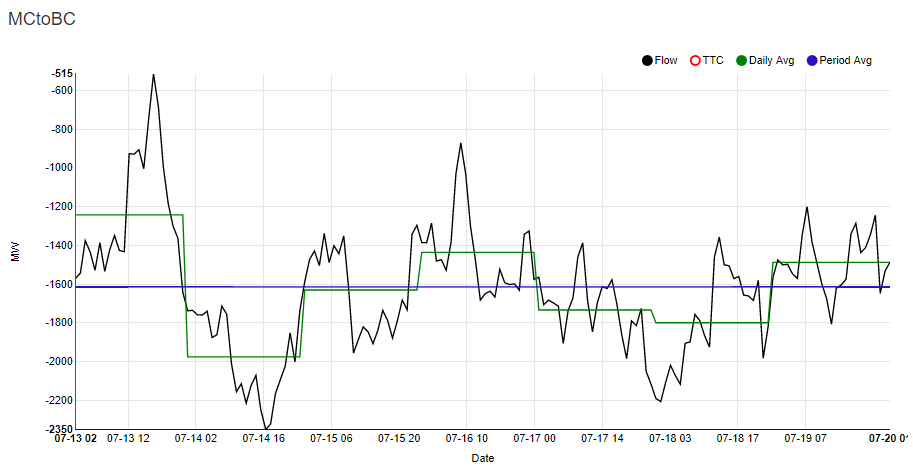 Imports continue to flow into MC, though it decreased just over 300 MW in daily average from the 18th to the 19th.  Flow peaked at -1,199 MW yesterday, the sharpest decrease in imports since early morning of the 16th (-870).