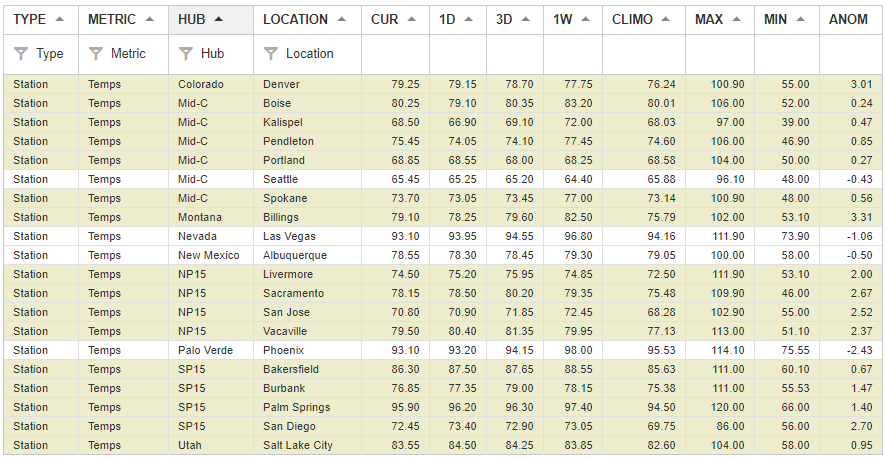 No surprise, the West is still trending warmer than normal, this time is all but four observed stations.  While last week we saw most stations with a 4+ degree anomaly, today only two are trending warmer than three degrees.  It’s not an abrupt trend, but things look to be cooling down, at least on the macro level.

Nothing illustrates the cooldown better than the next few weeks in Phoenix.  Double digit highs return for the first time in almost exactly one month as today is set to reach just 99, seven degrees below normal.   The next two days are looking a couple degrees warmer than they did yesterday, and while Phoenix will return to the 100s by tomorrow, there are only three days forecasted above normal through August 7th.

This chart helps illustrate exactly how hot it’s been in Phoenix, as the chart begins with the last time the high failed to reach 100, and ends with the expected high today.

While Phoenix is cooler than normal, Burbank is basically just normal.  The largest deviation from climo over the next week is just three degrees on the 23rd.  After a seven degree drop two days later, Burbank is forecasted to rise back to its two-degree buffer to ride out the rest of July.

Southern California is forecasting normal, and from the looks of it, Northern California is riding the same train, at least until the 28th, as until then, the largest variance from normal is just three degrees.  The 28th brings the potential return of 90+ degrees, putting the area 9 degrees above normal.

Sacramento is doing its best to pick up the slack for NP-15, but it’s not going to be enough to move the needle much.  After a high of 98 today (6 degrees above normal), Sacramento will be below normal for four days, though that should be followed by several single days that reach into triple digits.  This warm up is accentuated on the 24th with a high of 103, ten degrees above normal.  Once into next week, Sacramento should reach into the upper-90s every day through the end of the month.

Not a lot of action in the Northwest either though Seattle is set to drop to 68 on the 20th, equivalent to 8 degrees below normal.  Just two more days in July are forecasted to reach 80, both within the last week of the month.

Portland is predictably ten degrees warmer than Seattle, though that still only puts it into the low 80s for most of the month.  Anyone looking for heavy demand in Mid-C will be disappointed.

It isn’t likely enough to make much of an impact on overall Mid-C demand, but Spokane is forecasting triple digits on the 24th, putting the city around 13 degrees above normal.  This comes after a drop to 82 on the 21st, or five degrees below normal.  Some wild swings in the Inland Northwest.

Grand Coulee rose back to 97% on the 14th, pushing it within just a fraction of the 10-year high for that date.  It’s since come back off to 96% (though, the max did as well), but remains above the average marker for now.

The NWRFC 10 Day Forecast remains significantly below STP (which will update later today, to be fair), and will begin a sharp decline beginning tomorrow which will eventually lead total reduction of 1,785 MW by the 25th.  The latter part of the forecast continues a significant decline from what was originally forecasted last week, as well. 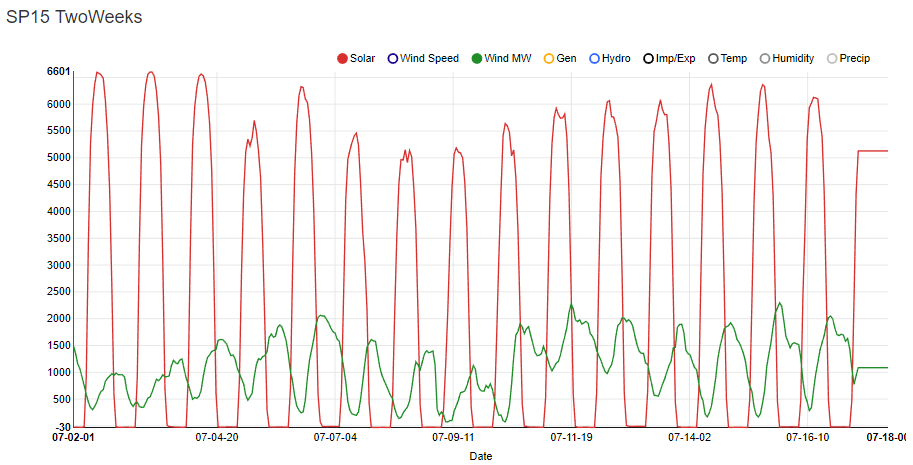 Yesterday marked a reduction in solar after six days of growth as generation fell from 6,364 MW on Saturday to 6,127 MW yesterday (both at 1:00 PM).  Both highs are well below the peak from two weeks ago on the 3rd at 6,601 MW.

Palo Verde’s cooldown also brought in lower demand, as expected.  Saturday finished 2,140 MW lower week-on-week (at its highest), while Sunday was 857 MW lower.  With today’s high of 99 in Phoenix, the lowest high in a month, demand should see an even higher week-on-week variance. 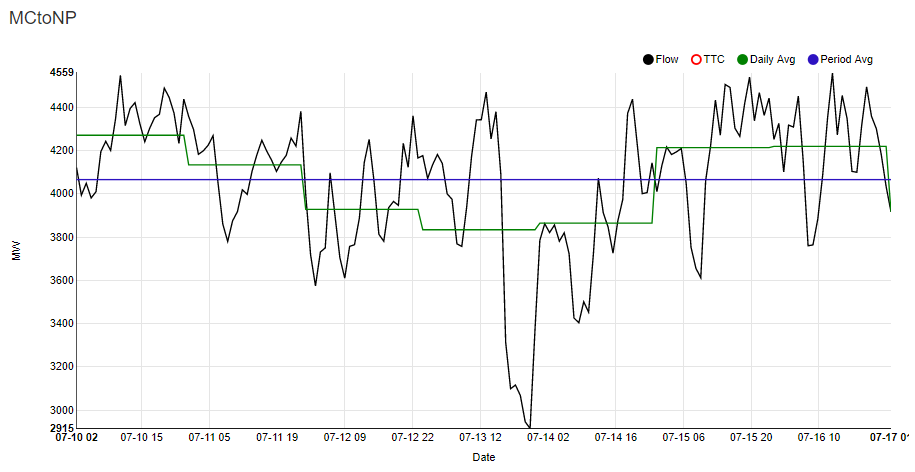 Flow into NP from MC peaked at 4559 MW yesterday afternoon, raising the daily average to 4220 MW, 160 MW higher than the weekly average.  This peak came after a sharp decline in flow earlier in the morning where we saw it dip to 3764 MW. 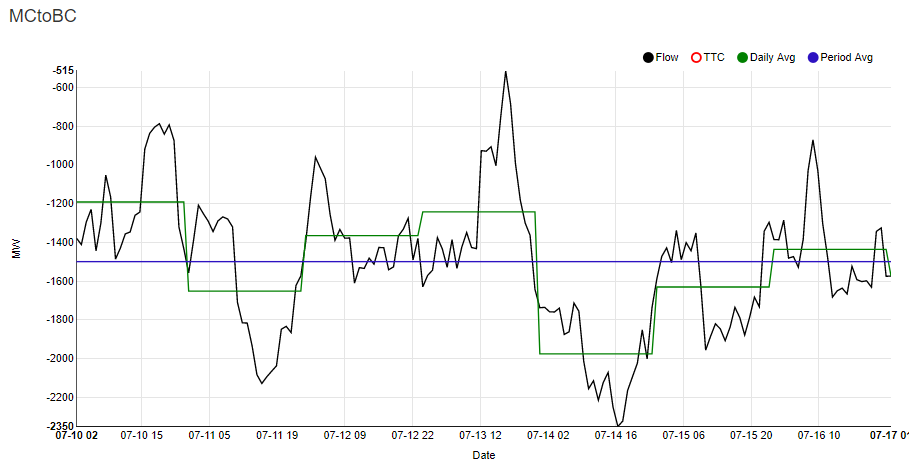 The MC-BC saw flow plummet to -2350 MW late Friday afternoon, but has since recovered progressively through the weekend as the daily average rose from -1975 MW on Friday to -1436 MW by yesterday.  -870 MW was the highest hour during the weekend, and the highest point since -515 MW last Thursday.