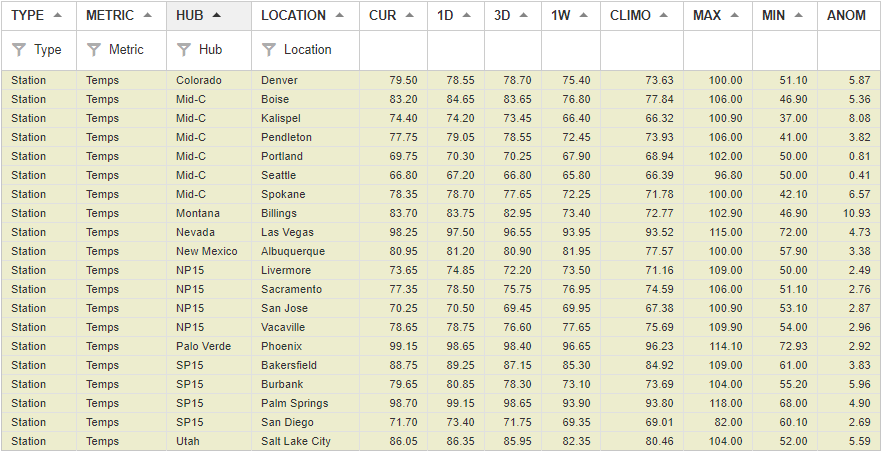 Average daily temps are trending above normal for every station in the west, and all but two are forecasting anomalies above one degree.  Stations from the Rockies-east have the highest forecast, especially in Billings where average temps are 10+ degrees from normal.

Denver’s highs aren’t too far above normal, but it’s daily lows are.  ACs should be running well into the night with lows in the 70’s — up to 14 degrees above the normal minimum temperature.

Daily highs will steadily rise through the end of the week, ultimately leading up to a high of 102 by the 8th — 16 degrees above normal and 3 degrees higher than yesterday’s forecast.  The 7th and 8th should both set new 10-highs as well.  Temps should fall back to normal from there, though a possible cooldown is forecasted beginning on the 14th.

New 10-year highs are ready to be shattered in Phoenix as well where the 7th should reach as high as 116.  This equates to 5 degrees above the previous 10-year high, and 9 degrees above normal.  From there, daily highs are forecasting a steady decline toward the low-100s, and the first below-normal highs in weeks.

San Jose on the other hand isn’t showing extreme highs on either side of normal.  The 7th is also the warmest day in the near future, but at 85 it’s just 3 degrees above normal, though it is five degrees warmer than forecasted yesterday.  There aren’t any days expected to vary more than 4 degrees from normal throughout the three-week forecast.

Not all of NP is mild as Sacramento is a couple days away from 100+ temps with a high of 101 on the 7th, enough for a new 10-year high, and 9 degrees above normal.  In a big change from yesterday, the 12th is now forecasted 8 degrees cooler, and fell significantly below normal for the first time in a while.

Demand should be kicked up a notch in Mid-C as Portland is forecasting highs just shy of the 90s again, and won’t drop below normal for more than a week.

Seattle isn’t forecasting much different than normal, but Spokane is a completely different story.  Tomorrow is set to reach 100 degrees, 18 above normal, and easily a new 10-year high.  The forecast calls for a steady drop in highs from there, but still well above normal until the last week of the month.

Grand Coulee was filled much earlier last year having reached the same elevation by mid-June.

Starting to see small increases to the 10-Day Forecast beginning on the 11th with a jump of more than 400 aMW.  That is also the point where the STP falls behind the 10-Day.  July 10th is expected to bottom out at 16,700 aMW.

Demand made a strong rebound on Monday and held much of it over the 4th of July Holiday, though loads remained down week-on-week by as much as 3,169 MW yesterday at its peak.  Demand is up 2,665 MW year-on-year however.

Loads are mostly unchanged from last week with a decrease of just 106 MW as of yesterday afternoon.  Demand is down year-on-year as well, now for the 11th consecutive day.

While temps in PV should start a steady decline beginning next week, loads are remaining high for now.  Demand peaked at 15,820 MW yesterday, and increase of 160 MW week-on-week, and nearly 1,200 MW year-on-year.

Gas aside, only wind saw increases day-over-day with 60 MW added to the outage total.

Mid-C demand increased 4.3% overnight with an increase of 41 MMCF.  SP-15 had an even larger daily change with a jump of 5.2% for a total of 126 MMCF added to demand.  Both hubs are also sitting well above demand from last week.